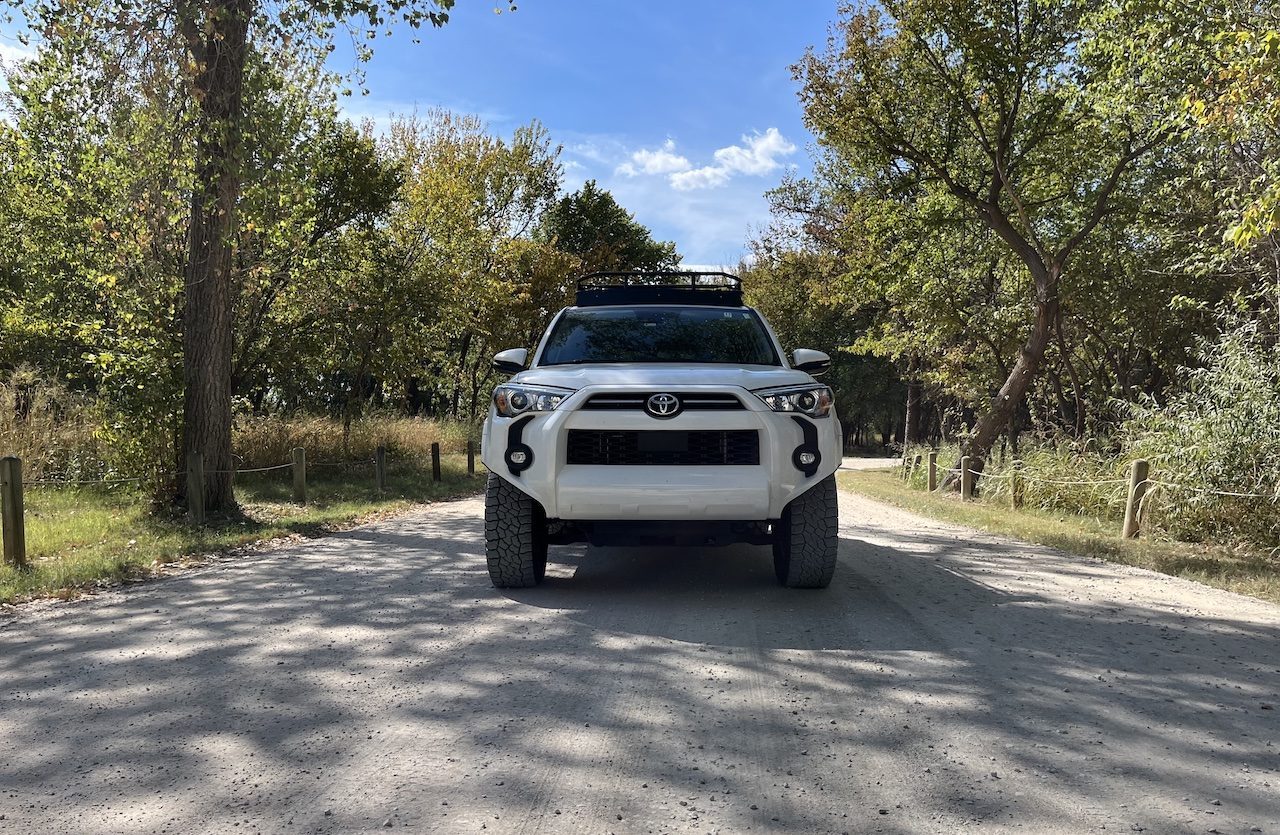 “To cut or not to cut?” “To chop or not to chop?” These were the questions I had as well as many other 4Runner owners have. The usual answer? Just cut it already!

A viper (some know it as a high clearance) cut is a win-win modification that I contemplated doing for nearly a year. Not only did I gain tire clearance and get rid of my tire rub while braking, but I also turn heads when we pass on the interstate.

Now, the reason for me waiting so long to commit to actually cutting my front bumper was the uncertainty. Literally, I was afraid that something would go wrong. I have this expensive vehicle and I am supposed to cut it up?! You can see the degree of concern I had.

I had all of these questions and concerns as to how to make sure nothing would go wrong. I’ve done my research and this write-up is for anyone like me who needs to know as much as possible to weigh the pros and cons before deciding to make the cut.

Why Do A Viper Cut? 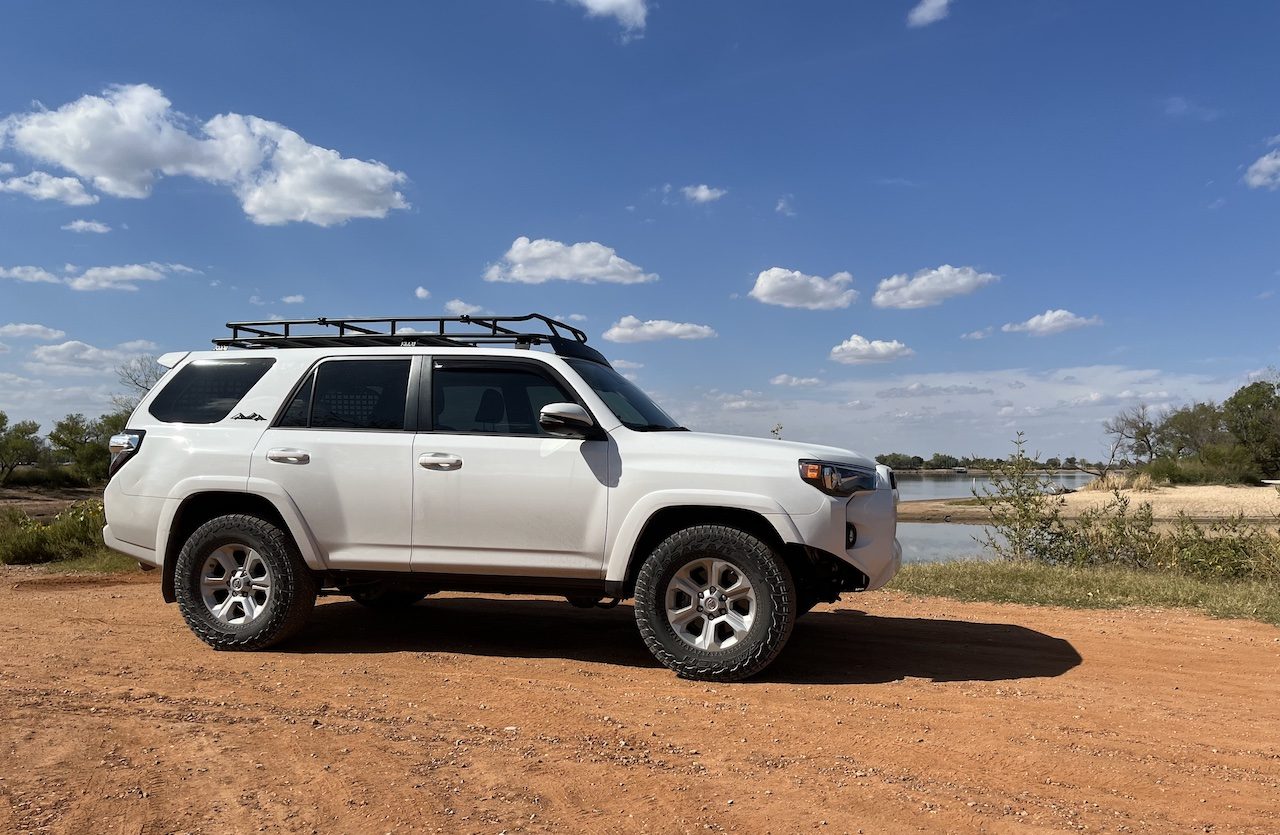 When it comes to purpose, this could be up for debate. My purpose? Well, my bumper was jammed against the wheel on a trail and I thought what the heck? It was a sign telling me that it was time. After putting this off for nearly a year, it was time cut.

There are multiple reasons why you should make this cut:

I run 275/70R17 Falken Wildpeak AT3W tires and quite frankly, have rubbed since day one. Considering the fact that I have a constant load of a couple of hundred pounds, the rub was pretty bad. This was especially evident when camping or driving to The Rockies during snowboard season.

Another common purpose is for adding Stage 2 High Clearance Additions which are becoming increasingly popular. They offer not only a better look and approach angle but more armor to protect exposed components after making this cut. Keep in mind, you will need an aftermarket front bumper to install these additions.

As you can see, there are plenty of great reasons to do a viper cut!

Is A Viper Cut Right For You? 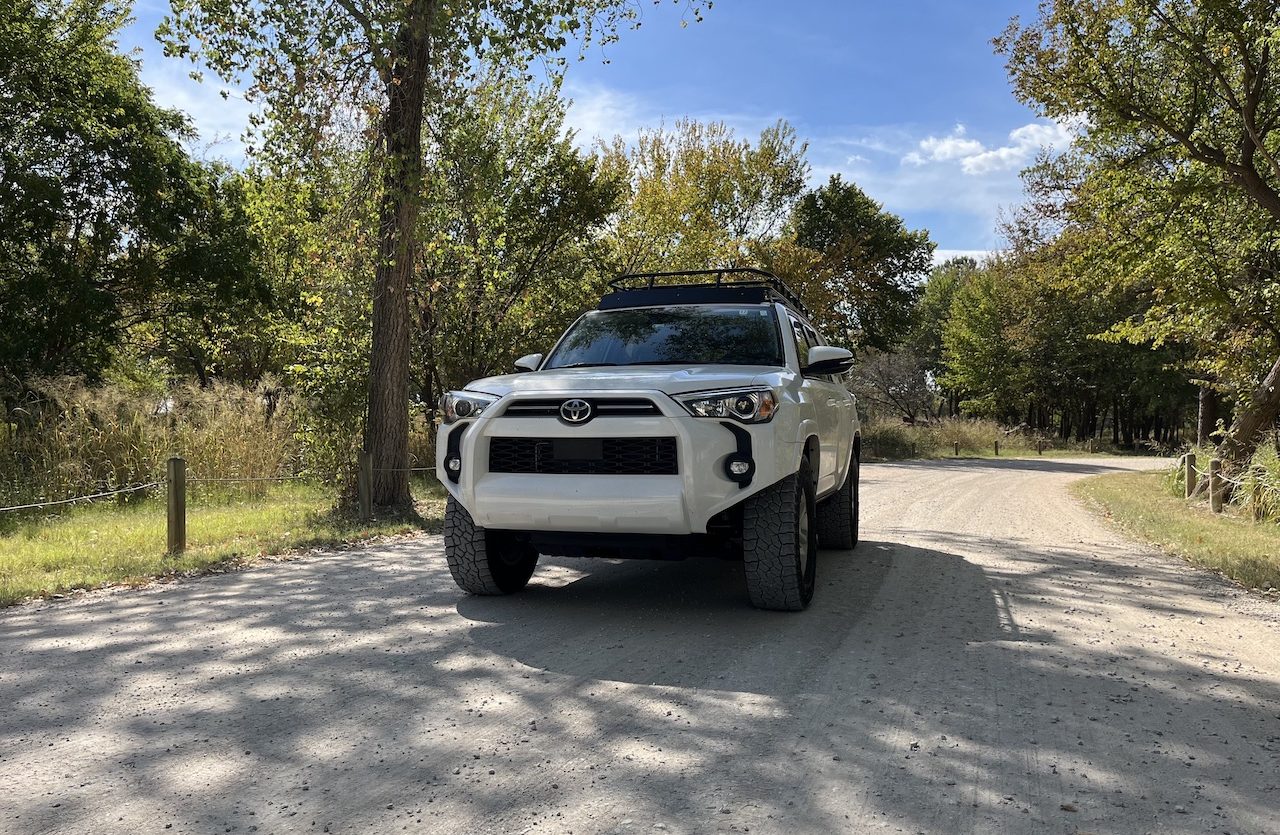 Figuring out if a viper cut is right for you is totally dependent on your needs. There really is no right or wrong reason. I have seen owners on this forum install a full steel bumper on day one of ownership. On the other end of the spectrum, owners wait until all of their warranties are expired and the loan is fully paid off. To each their own.

A great reason to cut your bumper would be to fit bigger tires. When I purchased my Falken Wildpeaks I purposely went with the 275/70R17 to avoid any trimming. Be sure to understand the actual size of these “32s” because the Wildpeaks are on the larger end & will definitely rub. Is it bad? No, but it’s obvious.

If you do make the cut, I 100% recommend that you purchase a washer bottle reservoir cover. I got mine from Southern Style Offroad because they are a reputable company and theirs works best even with bumpers that they don’t make.

Pros & Cons To The Viper Cut 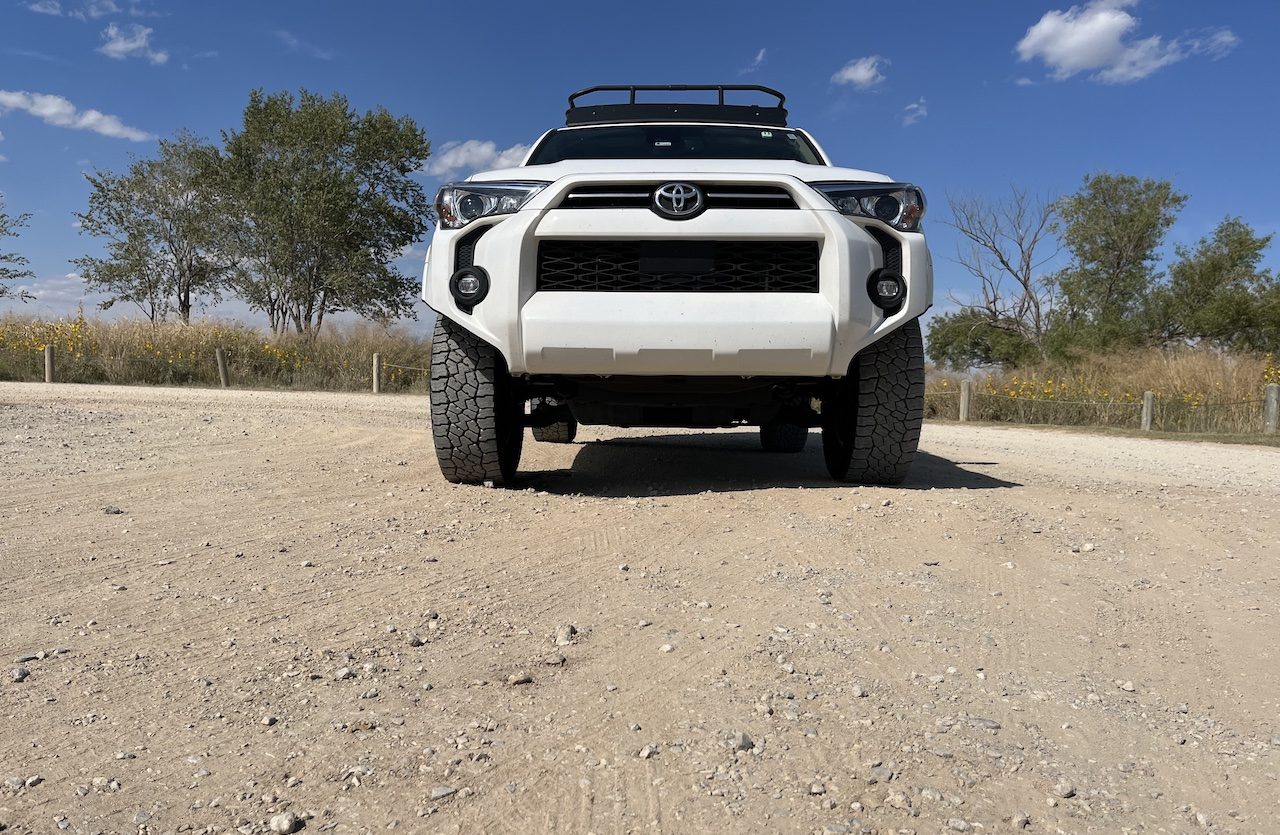 Before making my cut, I knew every reason why I needed to and the pros of doing it. I also wanted to be aware of the cons of a viper cut.

As you can see, there appear to be more pros than cons to a viper cut. If you’re the one to weigh options heavily, it’s a form of trust in this post.

Those three cons are literally the only things holding you back. Do your research, and make a plan. Know what your long-term plan is with regard to bumpers and Stage 2s if any. I don’t know what bumper I will buy, or if I ever will. However, I wanted to keep my options open rather than making my situation only rely on one bumper.

Note: A few users stated that wind noise became worse. However, I have not noticed this. 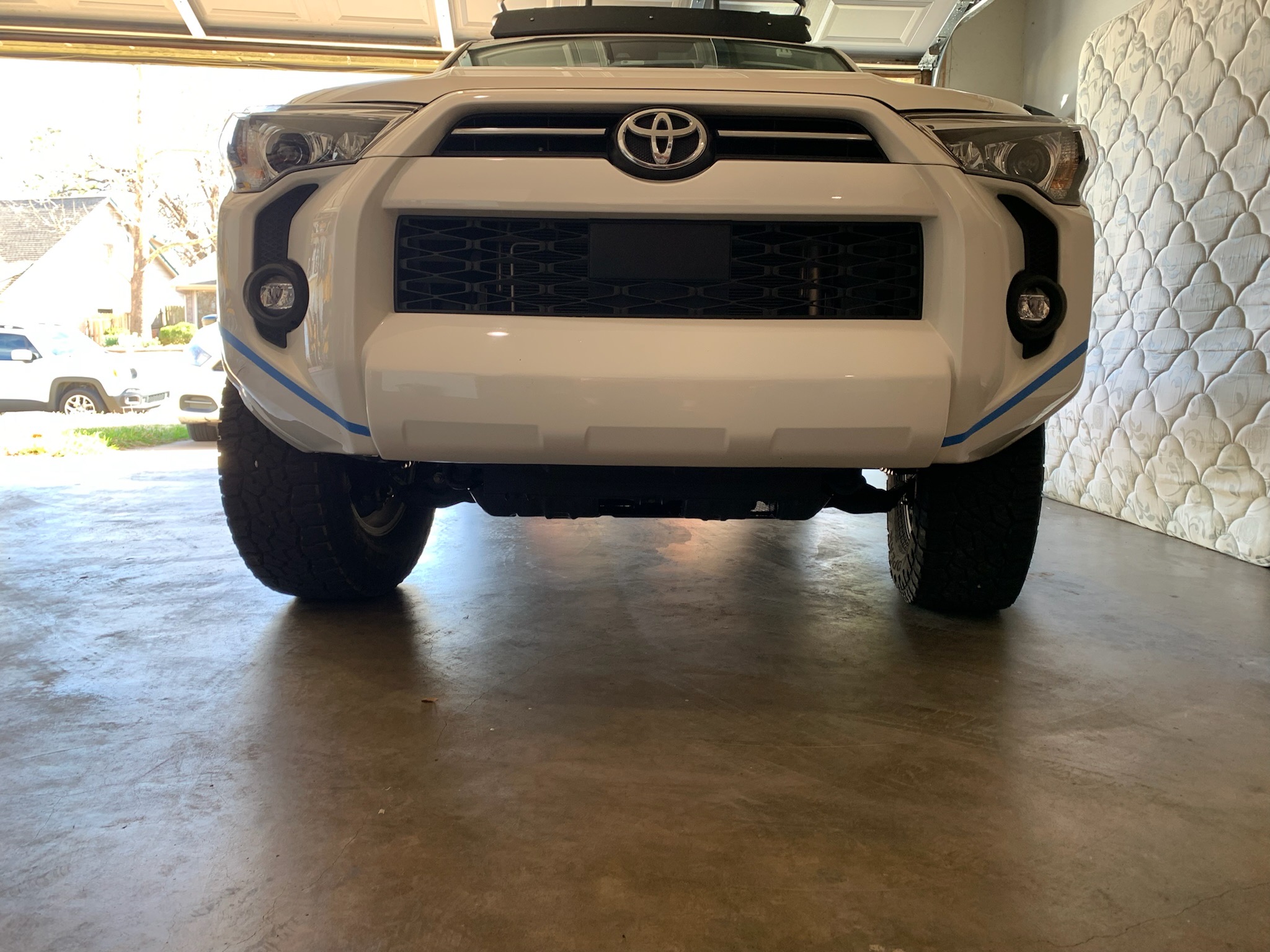 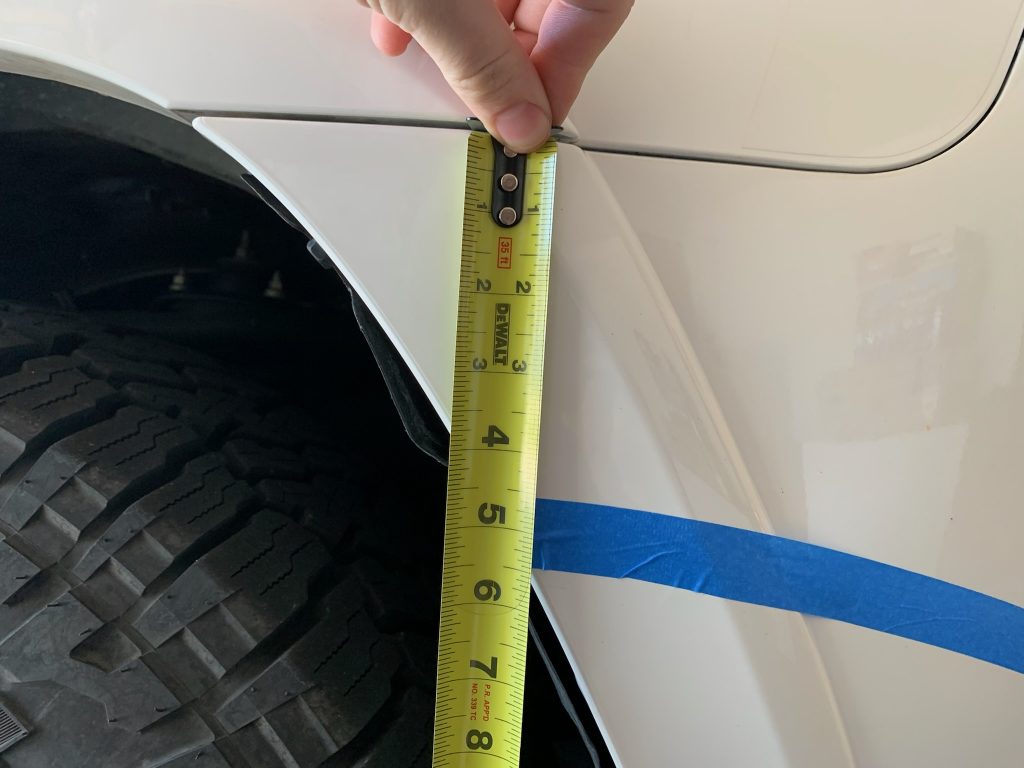 Measure twice, and cut once! There are several bolts inside the wheel well that secure the bumper. I suggest keeping the two uppermost bolts on the inside of the tape. This will allow your bumper to stay secure and not flop around at high speeds. Although it is not confirmed that this will happen, it seems likely.

On both driver and passenger sides, where the tape meets the fender well, I was roughly 4.5″ when measuring from the bumper’s gap. This is where deciding on what bumper and stage 2 additions you plan to have in the future comes into play. Plan ahead, and know what measurements you need to stay within, or don’t need to. 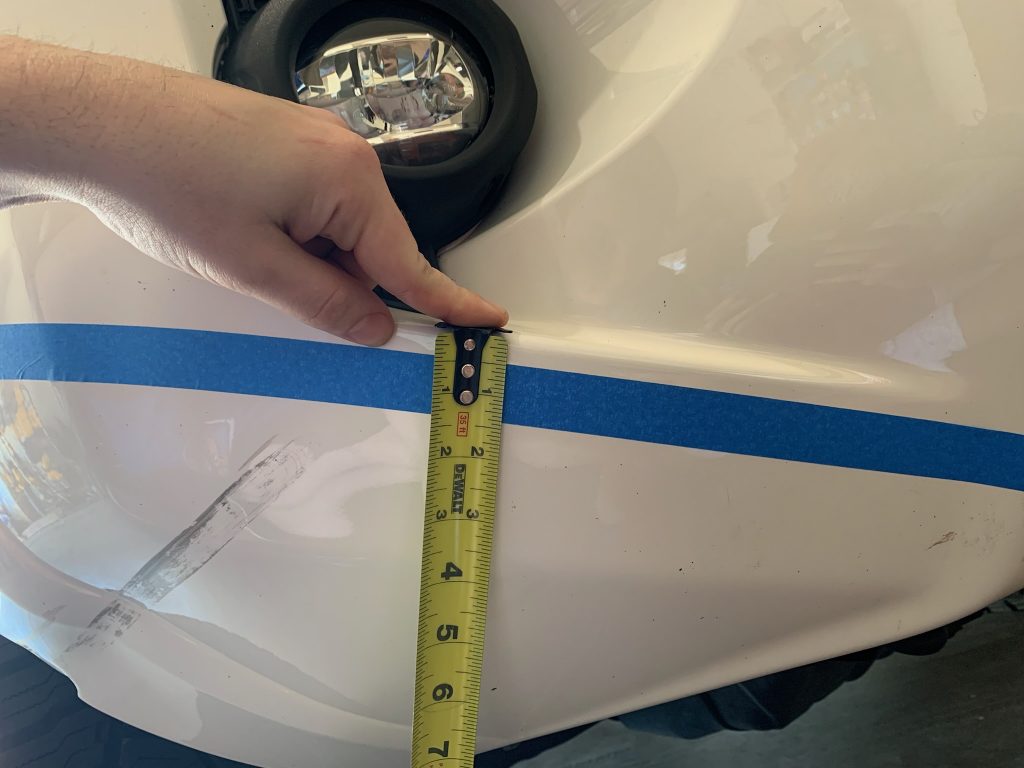 Under the fog light, there is an indention and from there, I went .5″ along the whole way in order to keep a straight line. This is where I have seen a lot of people cut higher for a more aggressive look. I opted for a slightly less aggressive cut. 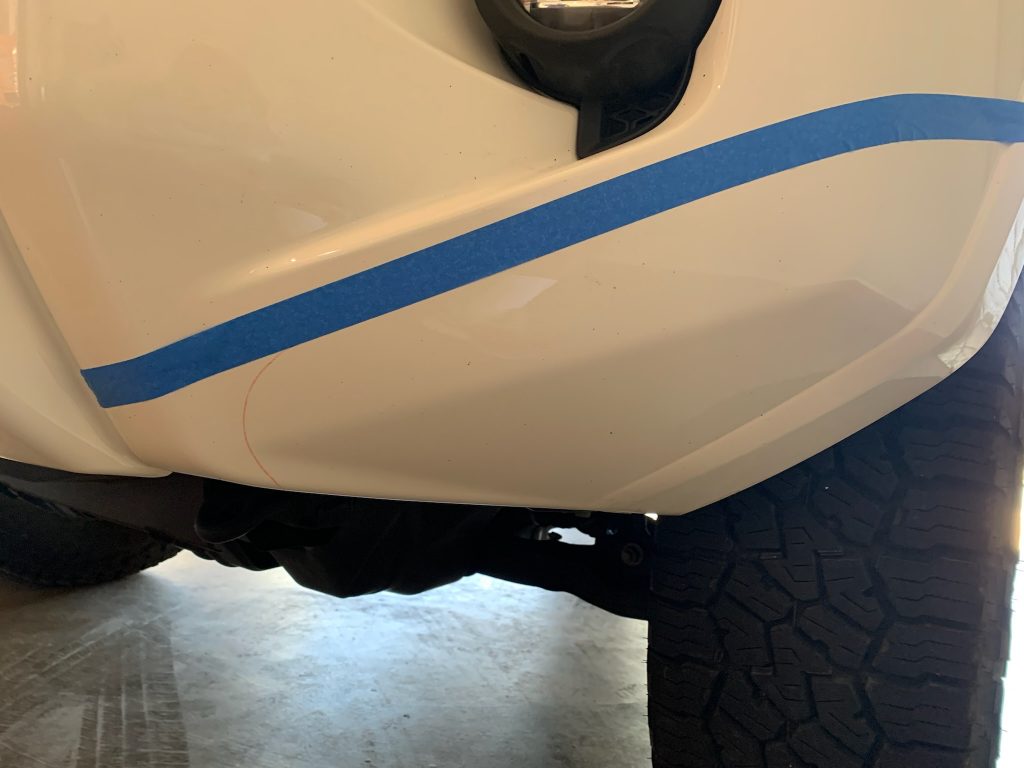 Next, you will want to draw your bottom curve. Again, you can go really aggressive here, or not so much. This is where you will notice the bolts that keep the bumper attached at the bottom. I recommend keeping them, but that decision is up to you.

In reality, I spent about two hours taping. I taped, re-taped, and questioned if I really wanted to do this. This was very tedious, but you want to make sure that the cut is perfect because there’s no going back. 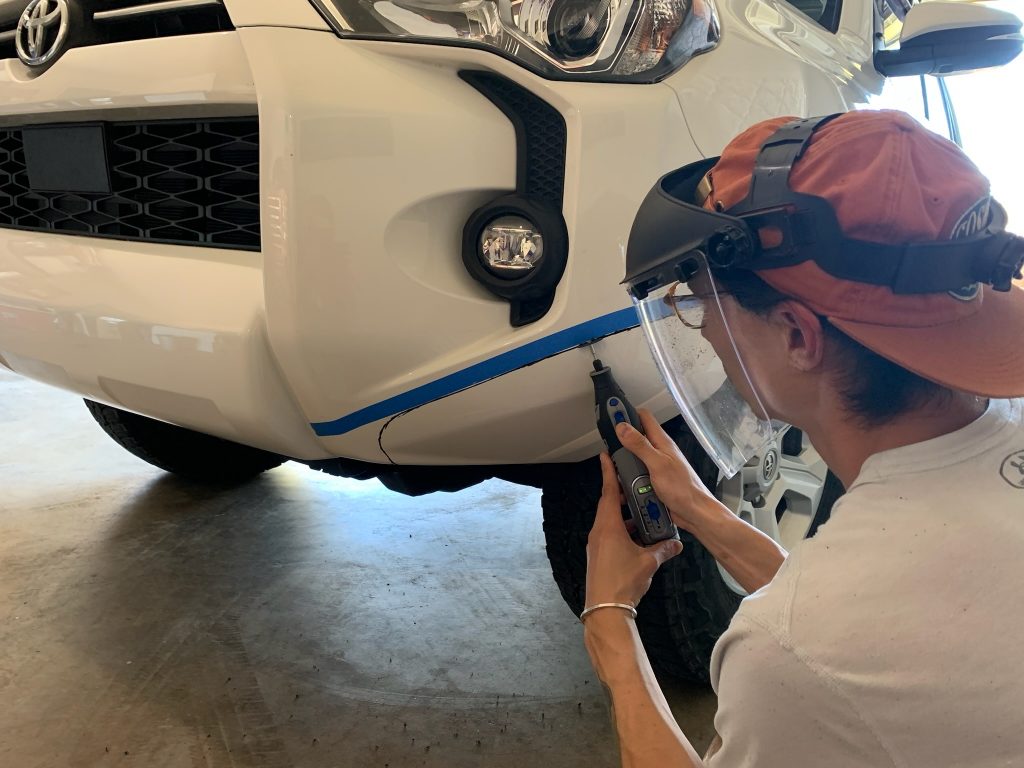 You’ve made it this far, and all of the self-doubts will come to an end once the blade touches your bumper; seriously. It’s like entering the promised land after much anticipation and a huge sigh of relief.

Cutting was the easiest part and only took about 25 minutes. I’m not saying to rush it but compared to the two hours of taping, this felt like a breeze.

Note: You don’t want to spend too much time with the Dremel in one spot. The bumper melts under the heat and gets messy. 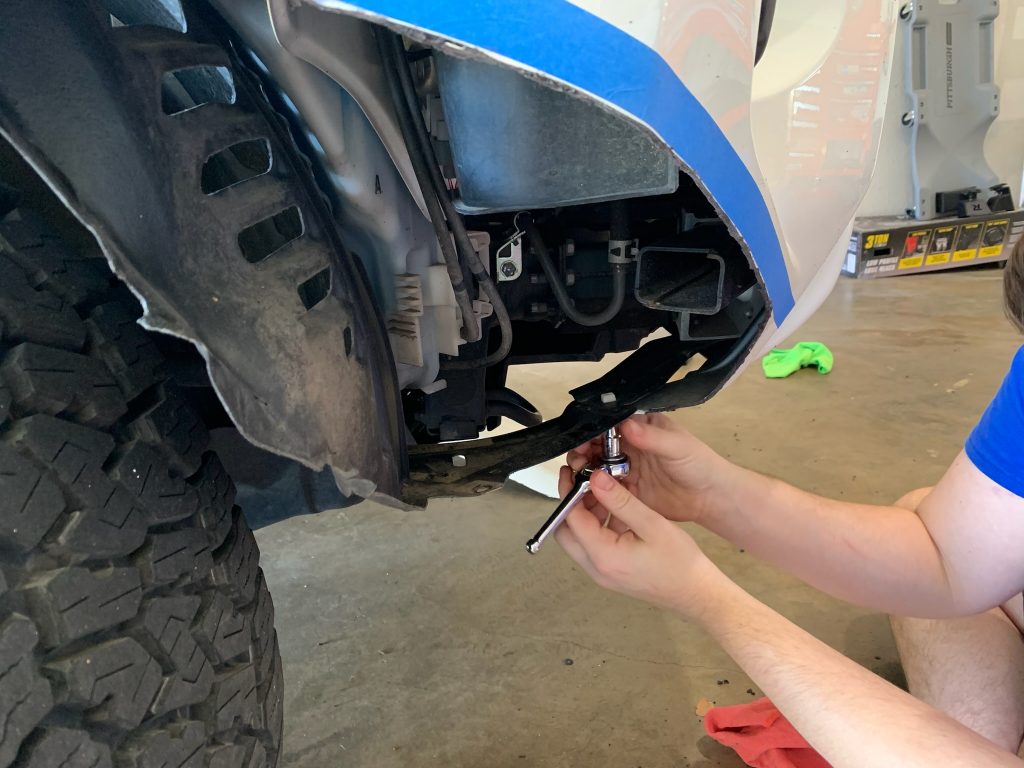 Here’s what no one tells you, I mean no one. I watched every tutorial video, read every forum, and saw every in and out to get the right cut.

There are two cross-members that need to be removed, but I’m not sure what they are. The passenger side used bolts that were easily removed. The driver’s side, however, required an angle grinder.

This was a game-time decision. Cutting it would make it look identical to the passenger side. Not cutting it meant a bar randomly sticking out and looking very unusual. I recommend cutting it, although it is an extreme cut. Look below. 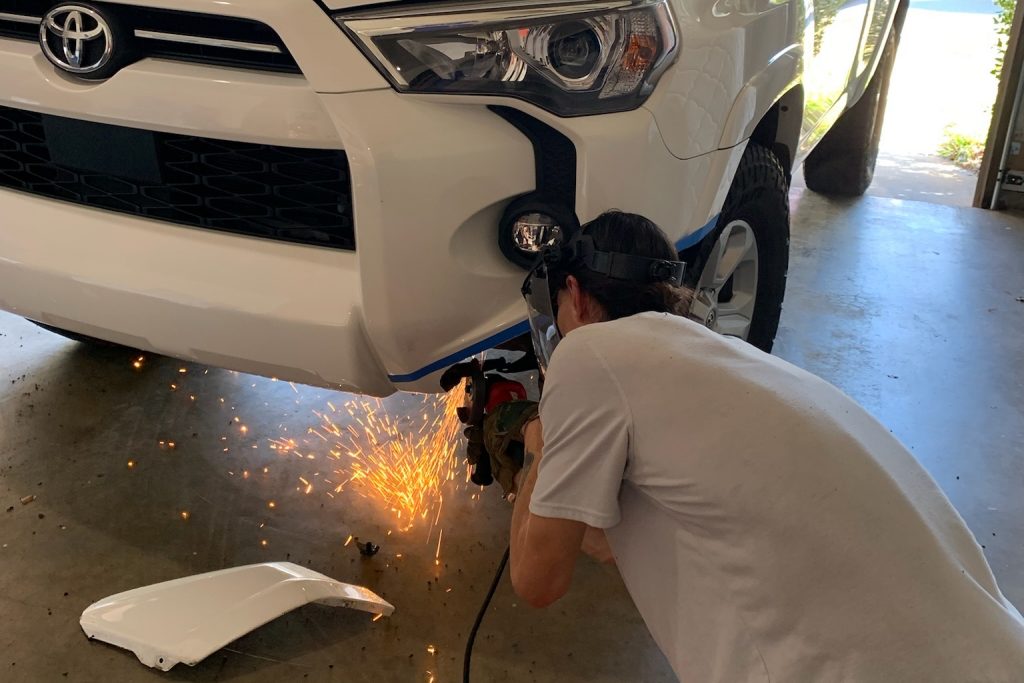 It wasn’t difficult, it just takes a lot of caution and awareness. I am no professional, just a person giving you everything you need to understand before committing to the viper cut. 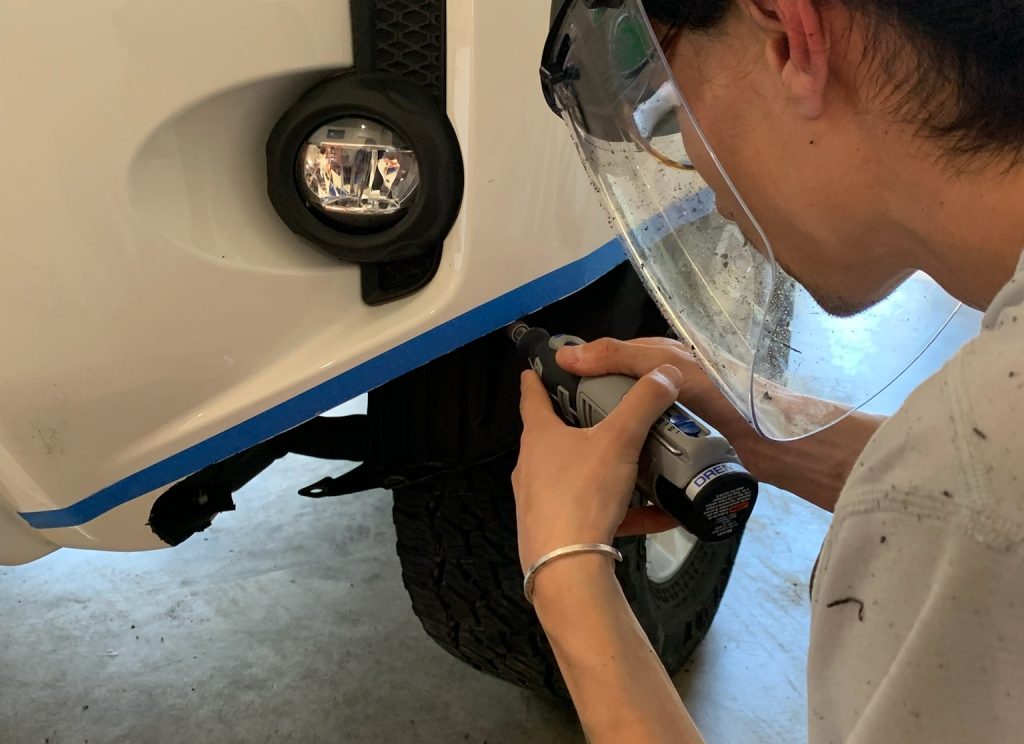 I ended up using our Dremel kit with a sanding attachment to smoothen up the edges before we added our door trim. This wasn’t necessary, but it cleaned it up well enough to make adding the trim a breeze.

This step is also optional, and there are various ways to do it. You can heat the liner and bend it where you like it to be or cut the liner and get rid of it. 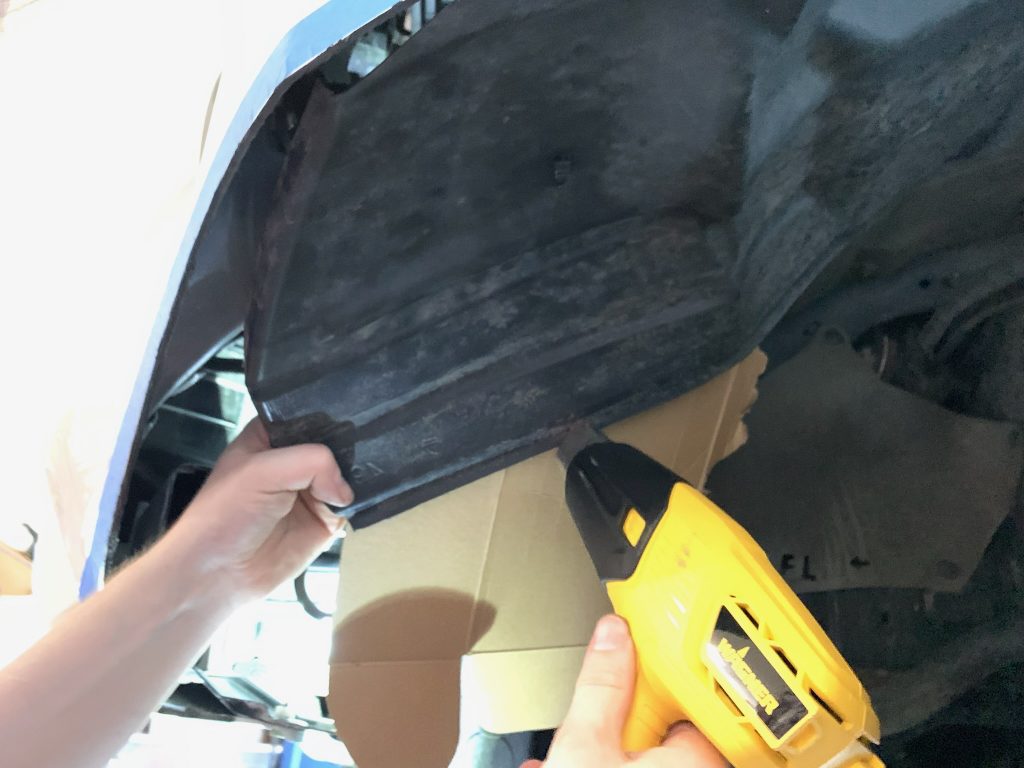 Initially, we went the heat gun route. We didn’t have much success, and we didn’t like the look of everything underneath after the matter. Also, we may need work to be done behind it at some point, or cut it for another project. 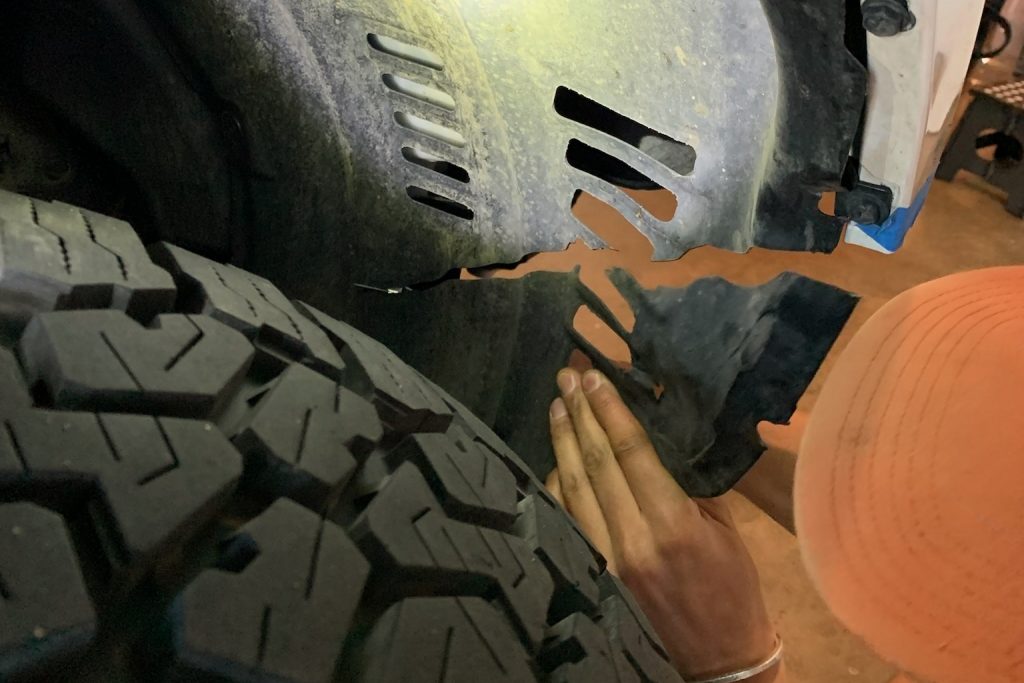 We used our X-Acto Knife and went to town. The blade went right through the liner and it was easy to keep the line that we wanted. The line we chose is flush with the new bumper cut. You can go higher or lower, it’s all personal preference. 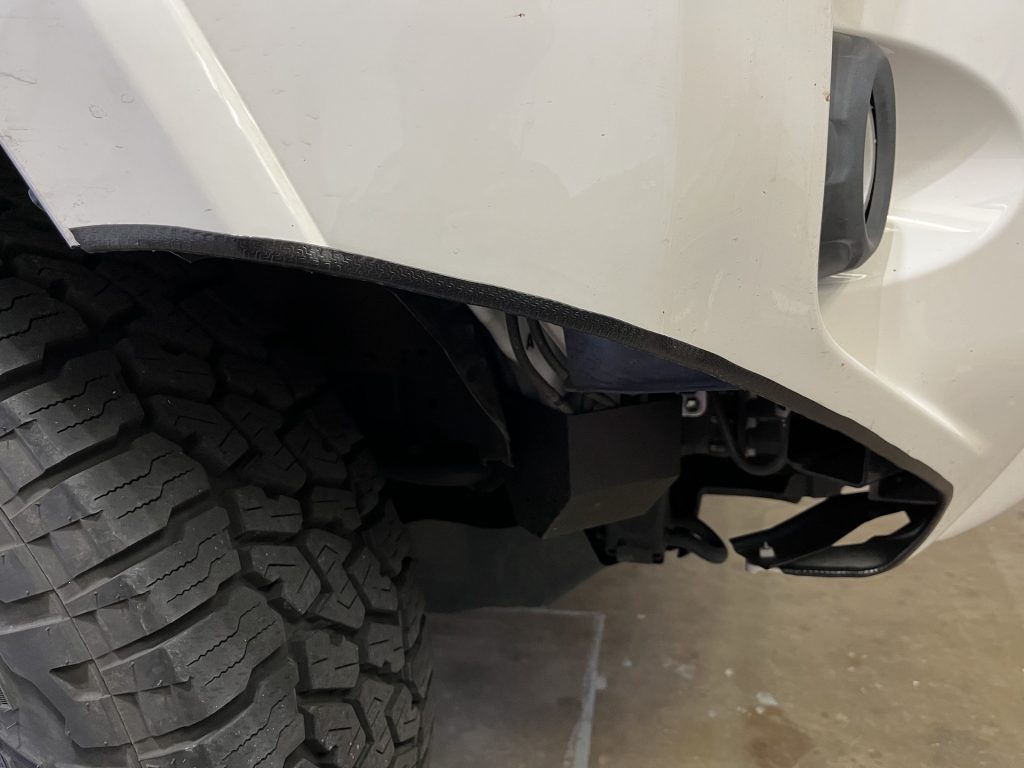 Finally, we added our door trim around the cut. I’ve seen one 4Runner without in person and it looked odd. The cut definitely looks much cleaner with automotive trim than without.

I had purchased the door trim from AutoZone and it melted in the heat of our Oklahoma summer. I learned my lesson and got a higher-rated door trim from Amazon, as noted in the Tools & Materials section. The finish turned out to be better too. 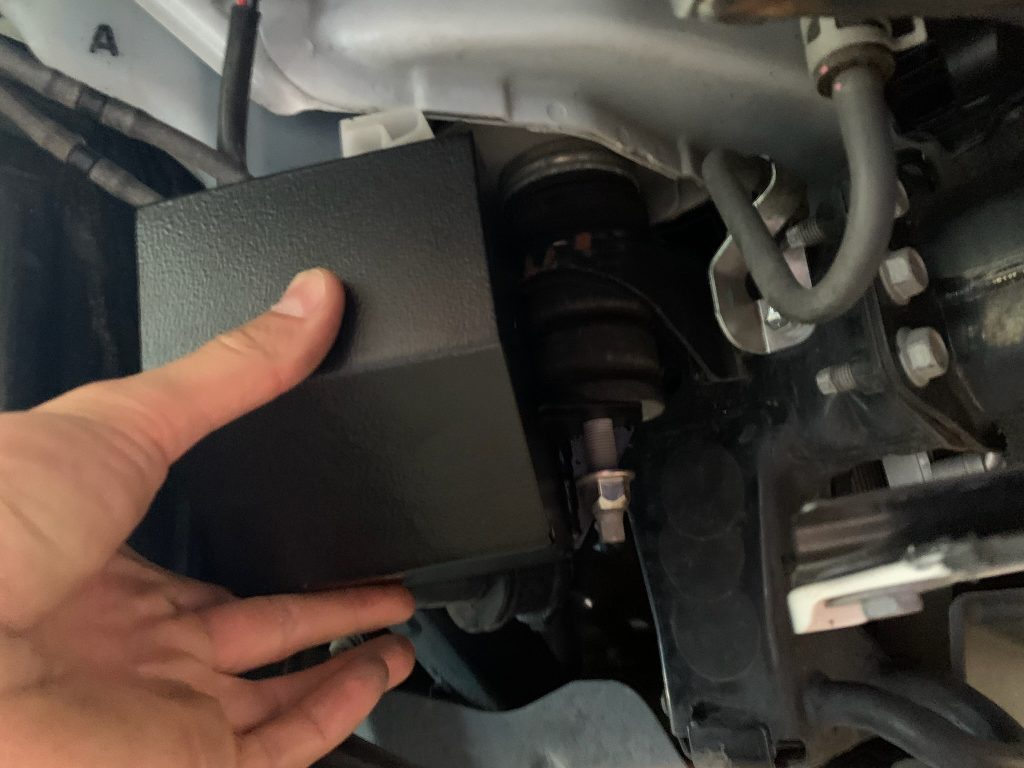 As stated before, a waster bottle reservoir cover is 100% recommended when doing a viper cut. Installation couldn’t be easier. There is a 14mm factory bolt holding your body mount (I think) that you re-use. 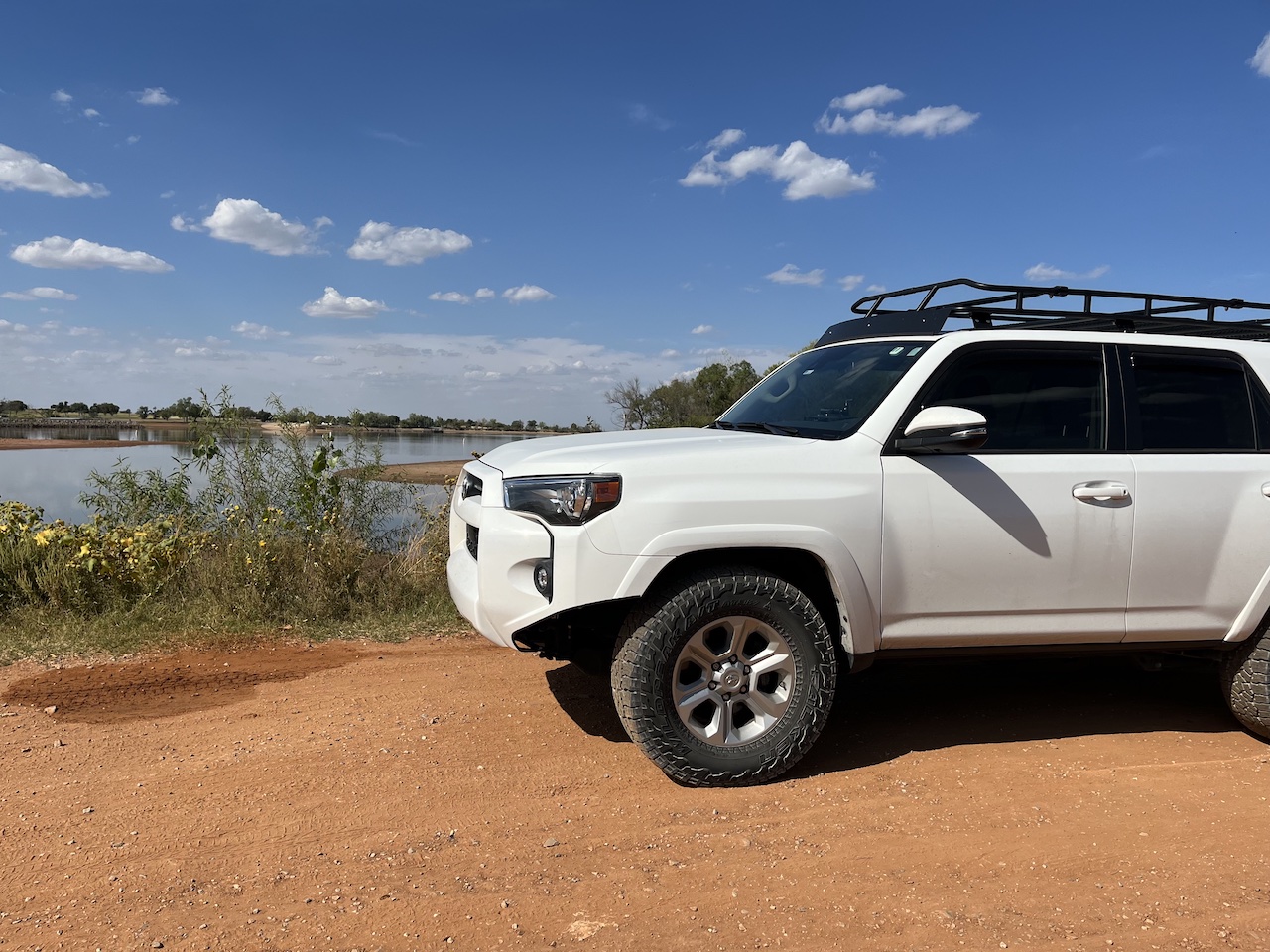 Congratulations! You finished your first real chop and I bet you can’t be any happier. I sure felt that way, and I still do!

This was my first real modification to my rig and to this day, I turn around every time I walk away from my 4Runner because I can’t believe I committed to something so easy yet put it off for so long. To think, I built up so much stress and worry leading up to this project. It was worth it in the end, and I couldn’t be happier with the end result.

Please leave any comments or questions you may have about this project. I want this post answer to everyone’s questions or concerns leading up to their own viper cut!

Tennis Professional in the Plains who enjoys traveling & creating memories with outdoor activities all while teaching people how to play the best life-long sport. Since getting a second 4Runner, enhancing the experience & functionality to load up & travel quick and easy has been the goal versus cosmetics.

Just curious since I read your short bio at the end; what’s your other 4Runner? Pro? TRD? Limited with a bumper swap? I see this one is an SR5 so I assume you don’t have two of the same?

James, first one got totaled. However, living the buy-once-cry-once motto this time around!

Just to note/emphasize/question a few negative points that I don’t think were fully covered:

Don’t mean to turn anyone off from the viper cut but these are a few additional negative points to consider. This has been the most comprehensive write up on the viper cut so far and I’m sure it will help owners make a decision. Just trying to add to an already thorough article.

PJ, you make valid points. Your comments are exactly why this post was created. However, mine may seem more biased towards the cut. It is not intended to be. It was more created for the owner that, in the same shoes I was in, was looking for the reason not to cut. Which your points come into play! As far as Wind Noise, I only stated the brief comment. To your concern, I bet that does play a huge role. I must say, Oklahoma wind is pretty gnarly! No Going Back, that is definitely an understood! I couldn’t agree more about the paint, but I’m going to assume the Devil’s Advocate role in favoring both sides. As far as Vehicle Value goes, to each their own. Your points are valid, 100%.

I appreciate your point of view, and hopefully this review and your comments will help other in the future!!

Nice job! Thanks for emphasizing the part of cutting the bumper. It is DEFINITELY a Mt. Everest climb for beginners. I am glad you got over it.

thanks Shaf! And once you start it gets so much better, haha