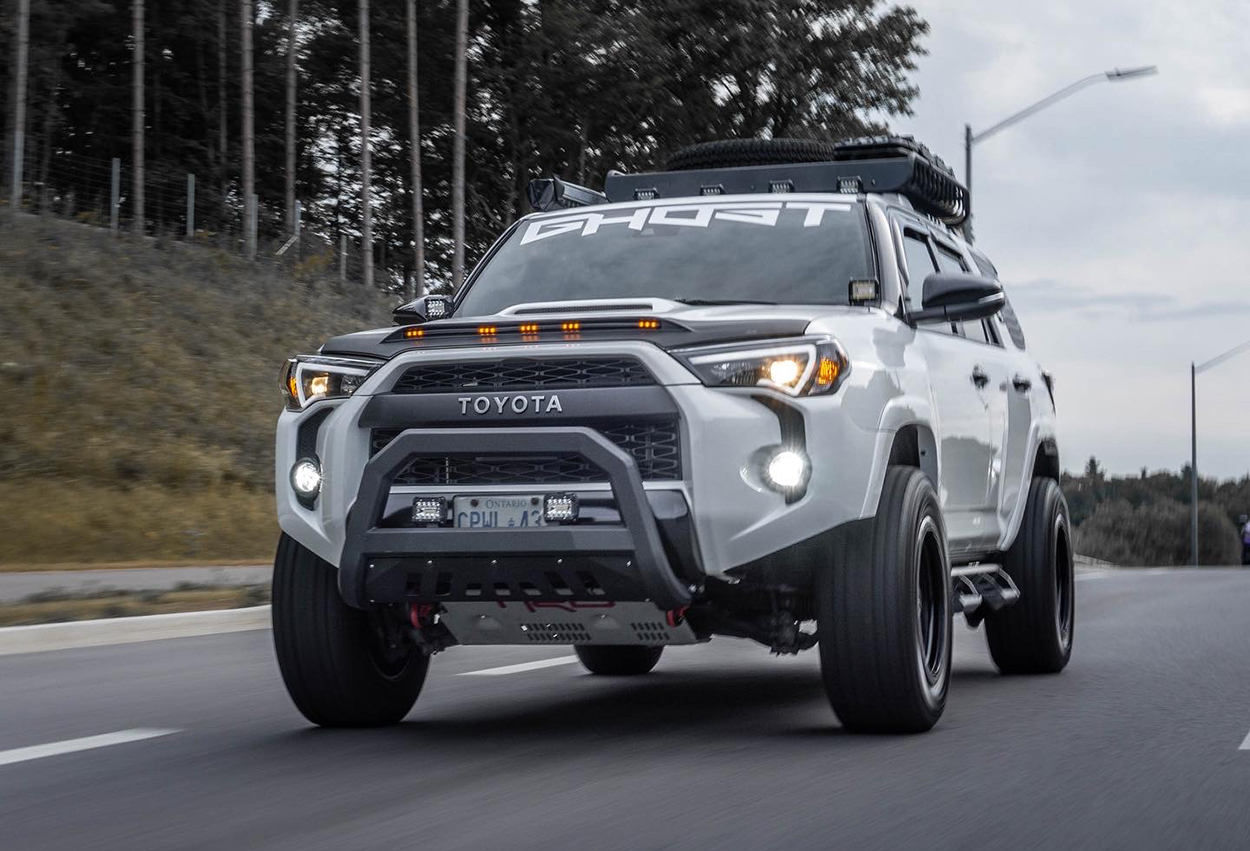 We Asked 9 Owners Why They Chose To Add A Hood Deflector To The Front Of Their 4Runner & What Brands They Chose – Here’s What They Said!

Welcome back to another Feature Friday! If you missed last week’s FF, we looked at popular window deflector brands for the 4Runner. This week, we will continue with the deflector theme in the form of bug/stone hood deflectors for the Toyota 4Runner.

If this week’s Feature Friday piques your interest in hood deflectors and rain guards, head on over to our article where we take a deep dive into both products.

As always, feel free to DM the owners on IG to ask any additional questions about their setup if needed. 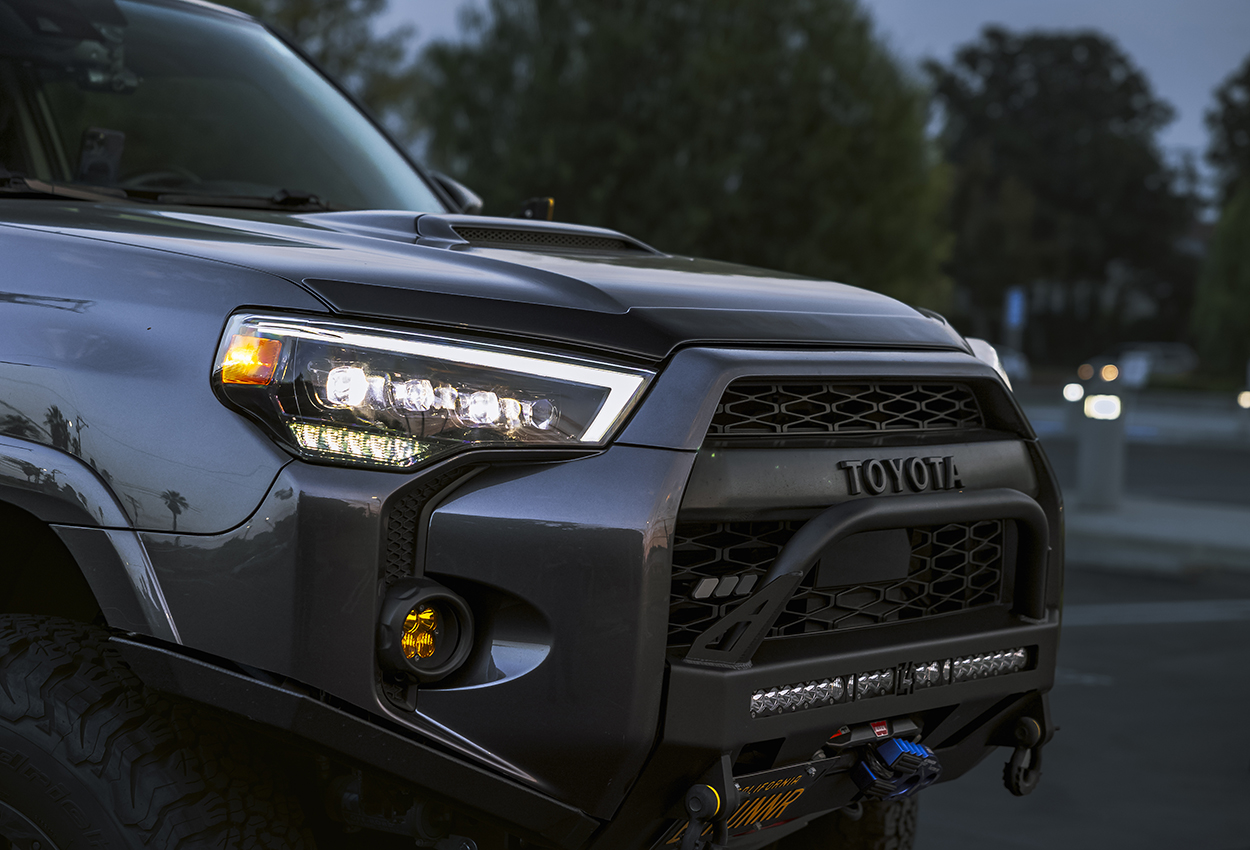 Let’s keep the front end of your 4Runner looking brand spanking new from day one!

Premium quality bug/rock deflectors will run anywhere from $60 – $100, depending on the brand or model chosen. Expensive for a piece of plastic you say? Well, when comparing that price to a new windshield insurance deductible or repainting your entire hood to cover up all the rock chips, that’s not too bad.

How Does A Hood Deflector Work?

When you install a bug deflector onto the front of your 4Runner, you are changing the wind’s path of airflow over your rig. By directing the air upwards and over the windshield, this new airflow aids in diverting sand, small rocks, bugs, and other debris away from the 4Runners hood/upper grille and windshield.

A bug deflector by no means is absolutely perfect, nor will it 100% guarantee your 4Runner safety from every single road hazard. However, it helps cut down on the potential threats of daily driving.

A hood deflector is a durable acrylic strip, a fancy word for high-quality plastic, which is mounted onto the hood of your vehicle. They mount in less than 30 minutes using a couple of different methods. One way is via strong 3M automotive tape since these deflectors don’t require any drilling. Others will mount with additional hardware using factory holes that are already under your hood.

Styles will differ in both deflector and ridge height. A ridge that is too low profile may not be effective in deflecting air over your 4Runner. This option does look the sleekest, but at the end of the day, it’s about function. On the other hand, a hood deflector with a ridge that is too high can also prove ineffective by having too much drag and not allowing the air to properly go over your 4Runner.

There are various color options ranging from light tint to dark smoke, black, or even chrome. Either way, it’s a great way to both enhance and protect your 4Runner’s appearance. 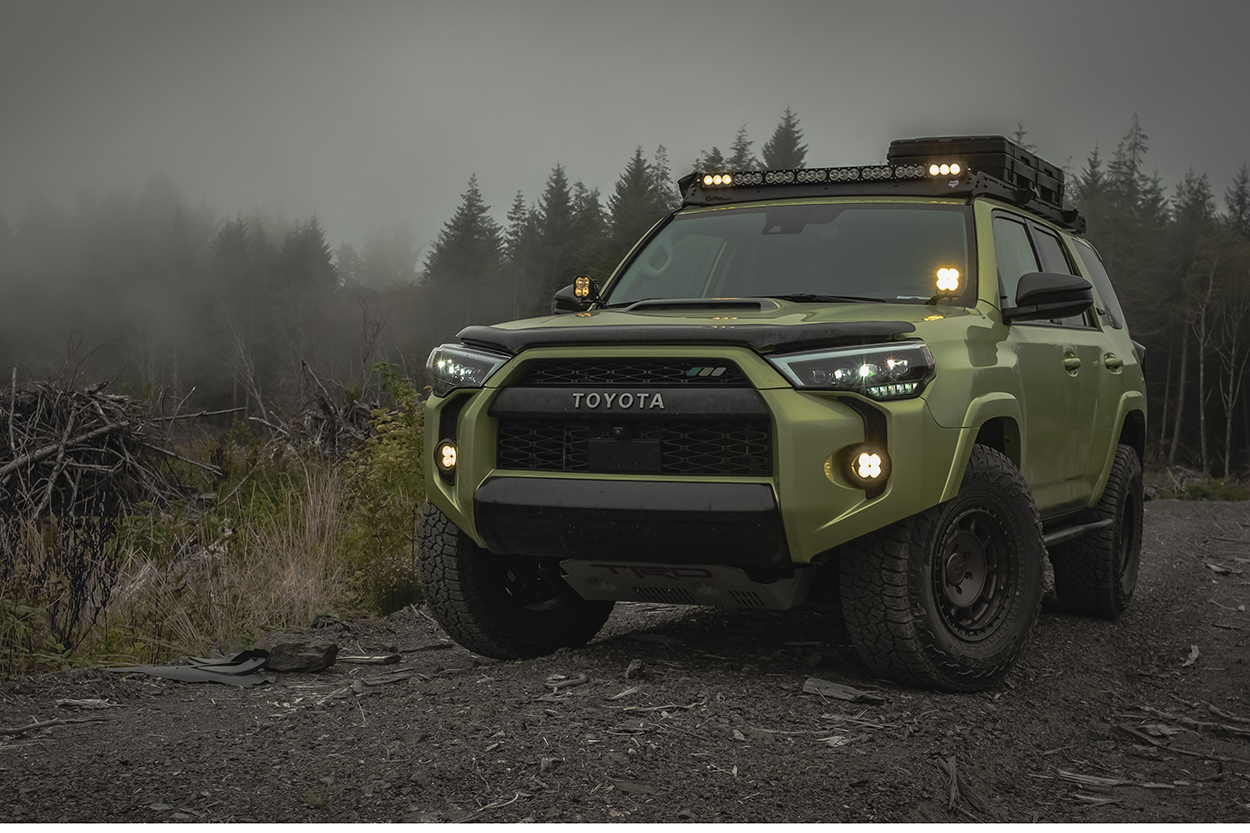 This mod was super easy to install and the price was great too. If after long road trips, it gets dinged by a rock, I don’t mind swapping it out if it is damaged. I think it improves the front-end look of the rig as well. Shout out to watching TRD Jon’s video on this product, his video is what made me pick it up!

The AVS Aeroskin Lightshield hood deflector adds a subtle accent to the front of my 4Runner with its low-profile design. The built-in led strip is definitely something different and catches a lot of attention. I also like how this was a very simple install. The wiring was a breeze with the included self-tap wiring. Overall, in my opinion, AVS has made a pretty solid product. 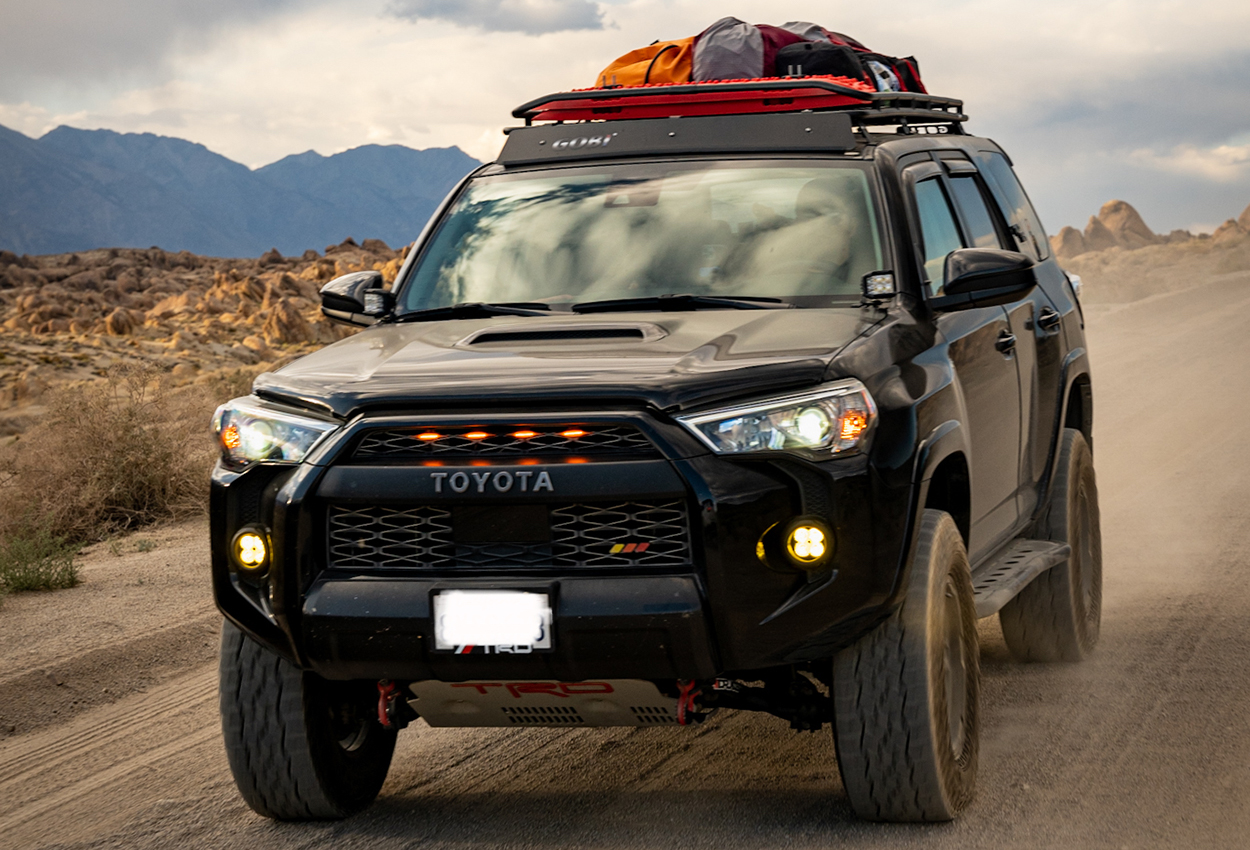 I like the looks that the hood deflector gives my truck. The deflector also provides protection to my hood from any sort of road debris. I like the slim look of it compared to the larger options out there on the market. 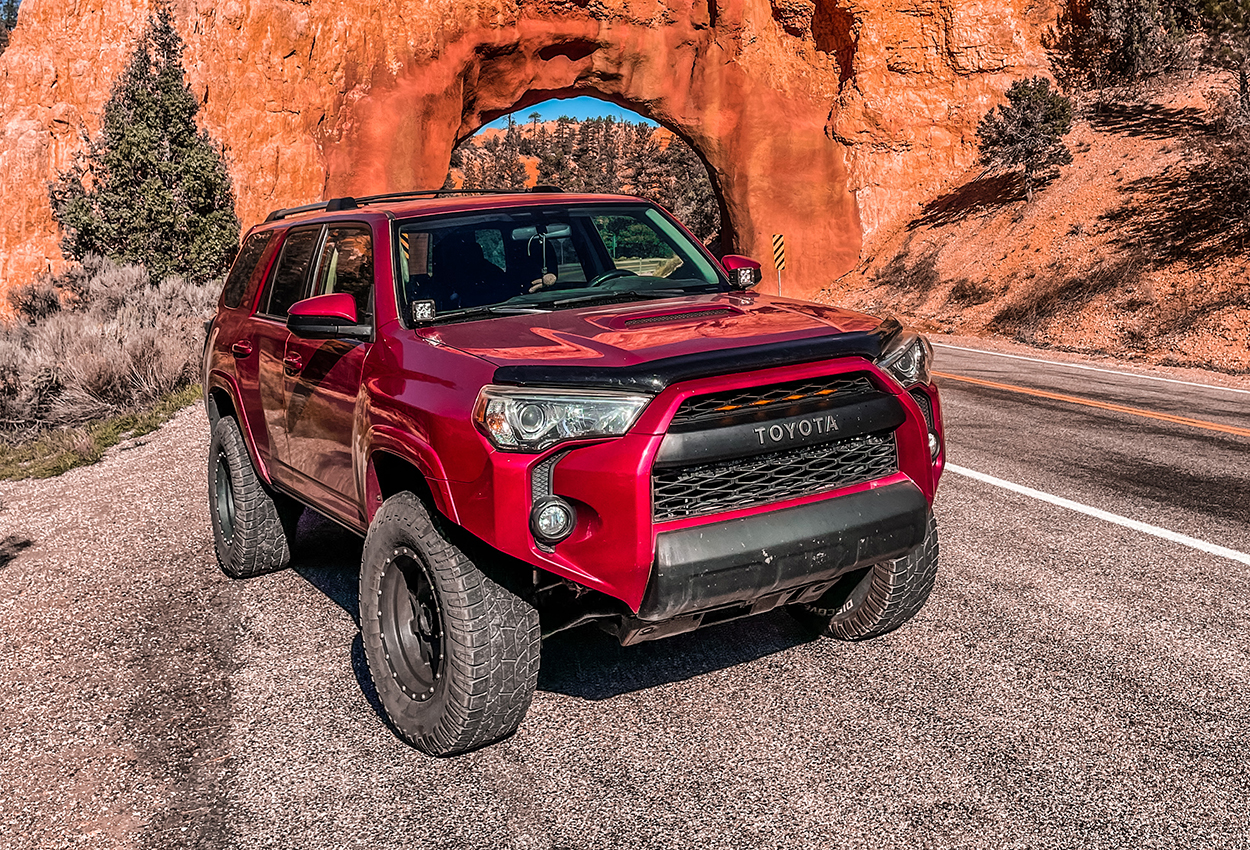 I enjoy the bug deflector for its aesthetics. I wish I could say that it deflects all bugs but that is not the case. After taking a road trip that was a couple of hours to Utah, I still had at least a handful of bug splatters. There were a few on the deflector itself, so I believe it did work to an extent. I like how it looks, but the function is a bit lacking. 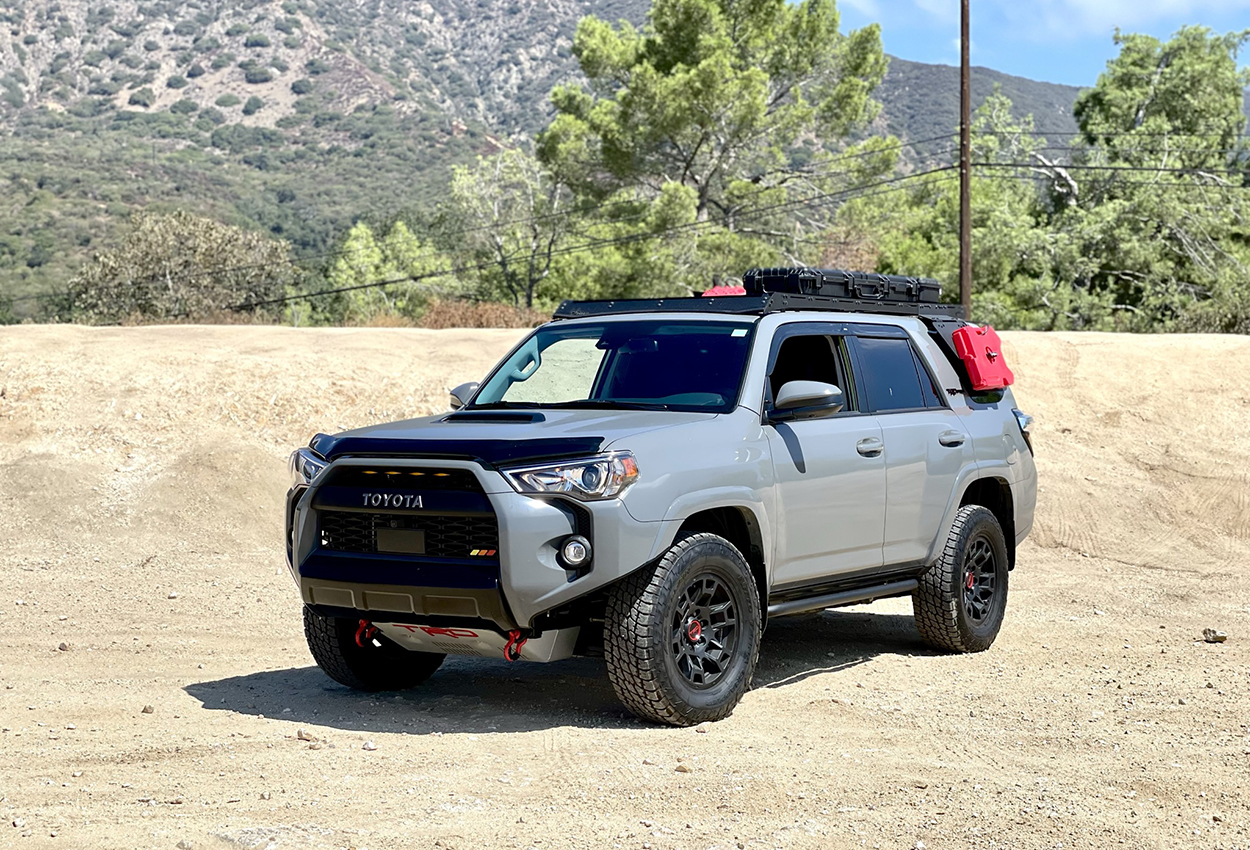 My truck is wrapped and I started to notice some damage to the wrap from rocks hitting the hood. Because of the angle of the hood, the damage was pretty extensive. Since the deflector had been on, I haven’t really worried about wrap damage anymore. It also does well with deflecting bugs here and there on road trips. 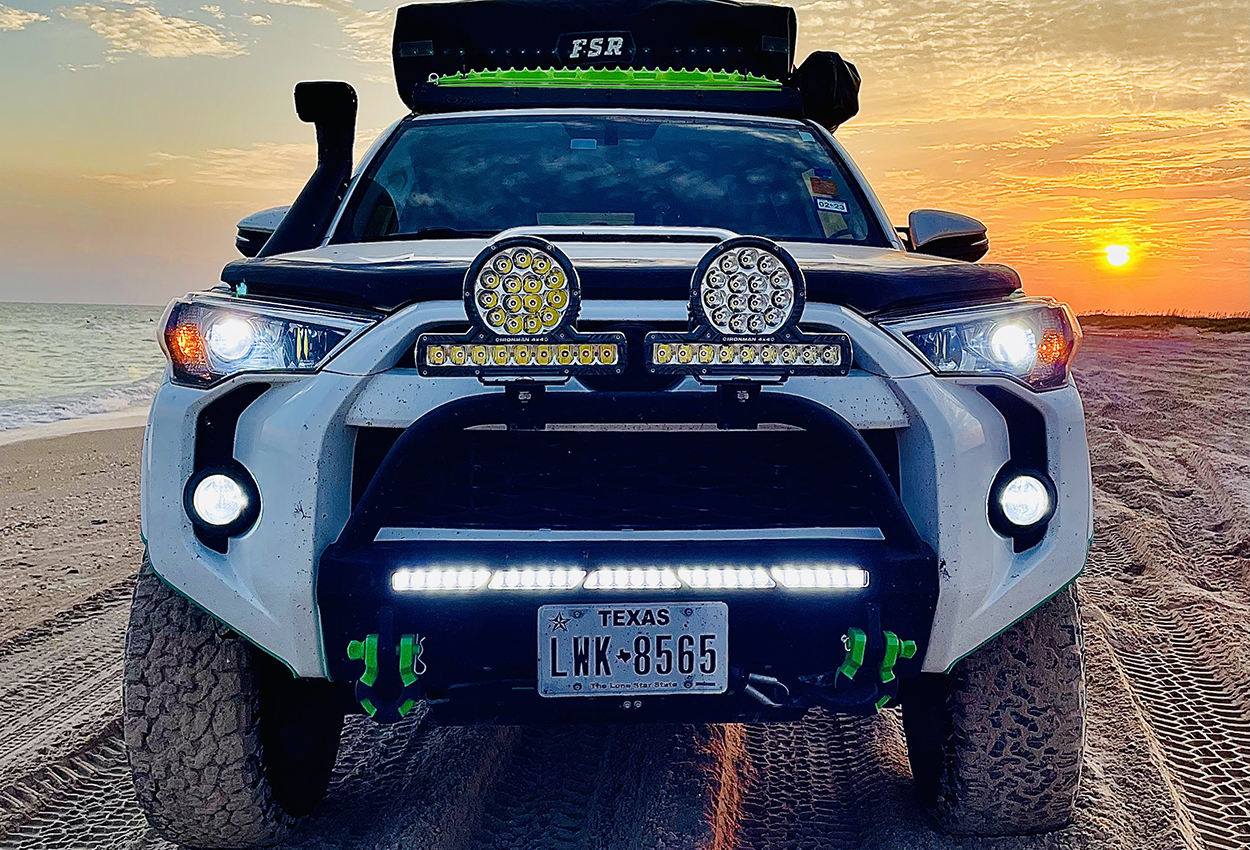 The AVS Bug Deflector protects the hood against road debris to a certain extent. It does this while also giving your rig a nice bit of front-end styling. This specific bug deflector has a medium profile and sleek look that contours nicely around the 4Runner’s hood. Overall, it has done well shielding my rig. 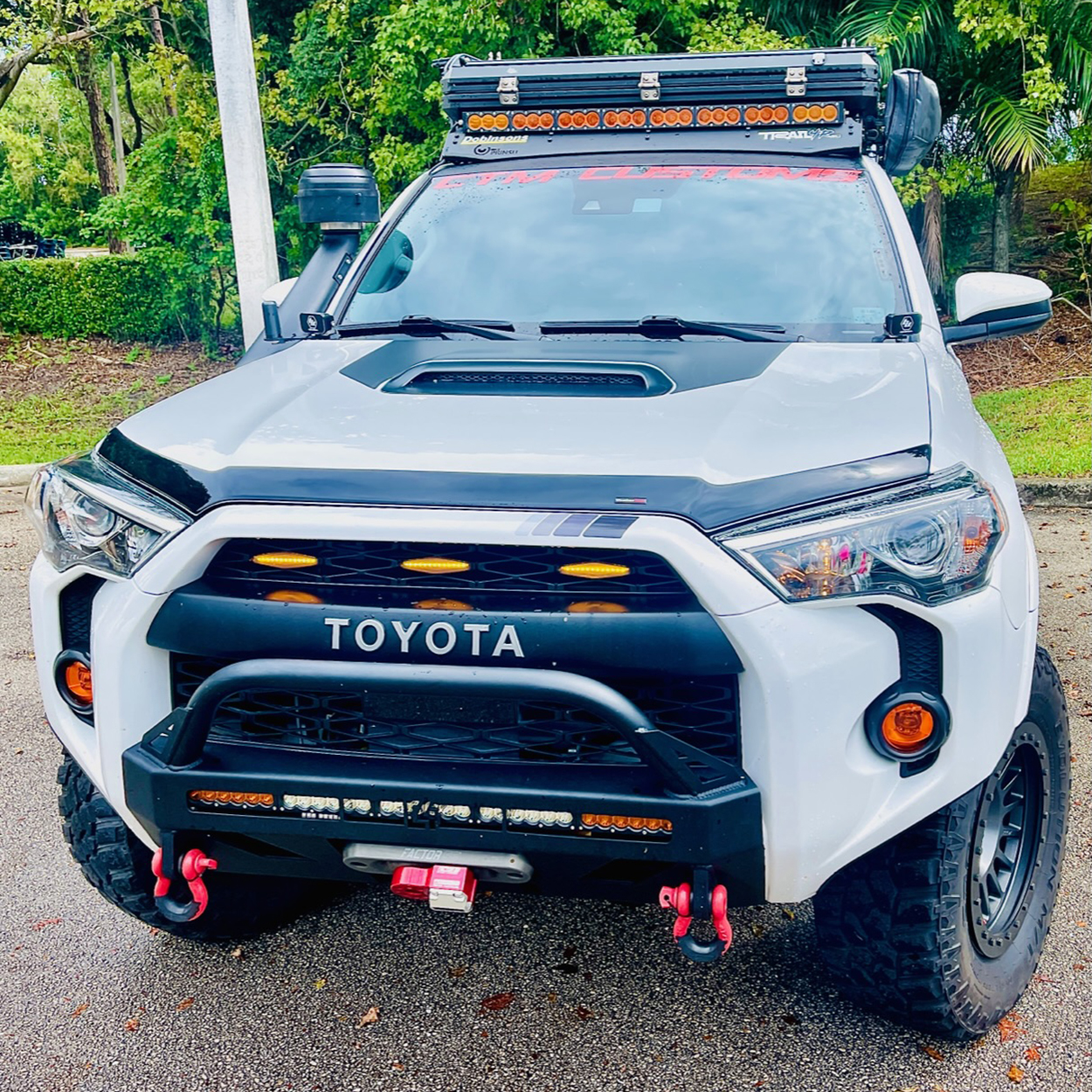 This WeatherTech bug deflector fits my needs perfectly. I like that it’s low profile and actually adds to the look of my 4Runner’s hood. It is held in place with 3M VHB automotive tape, so there is no drilling, or clamps that can damage the paint. It has a stylish fit and is flush-mounted and designed to contour to the curves of the hood. Most importantly, It definitely keeps debris and bugs stay off of my hood. 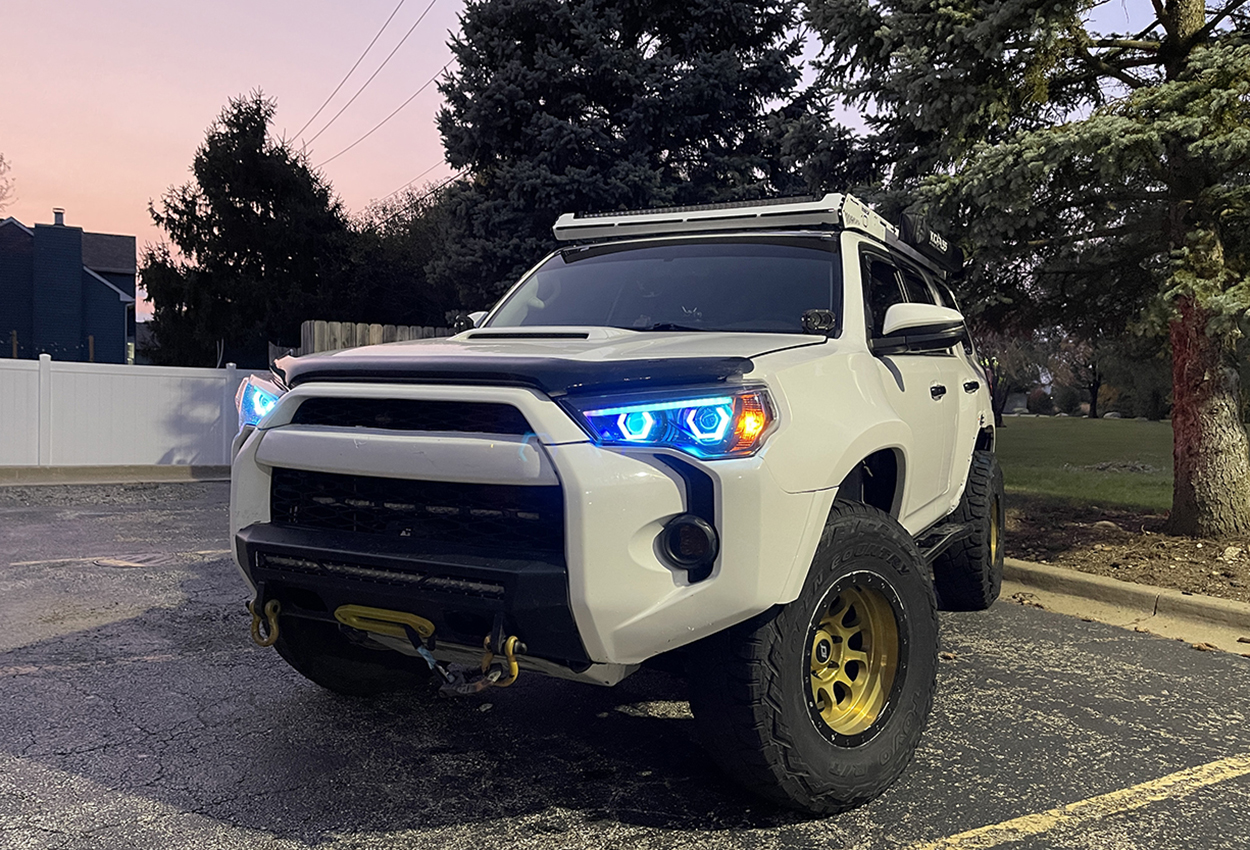 I really like how the bug deflector looks on the 4Runner. It does its job to deflect small stones and road debris as well. Before installing, I got a few rock chips on the front of my 4Runner. After installing it, I have yet to gain any more. All and all, it is one of my smarter purchases since living in the Midwest, rock chips will lead to rust. 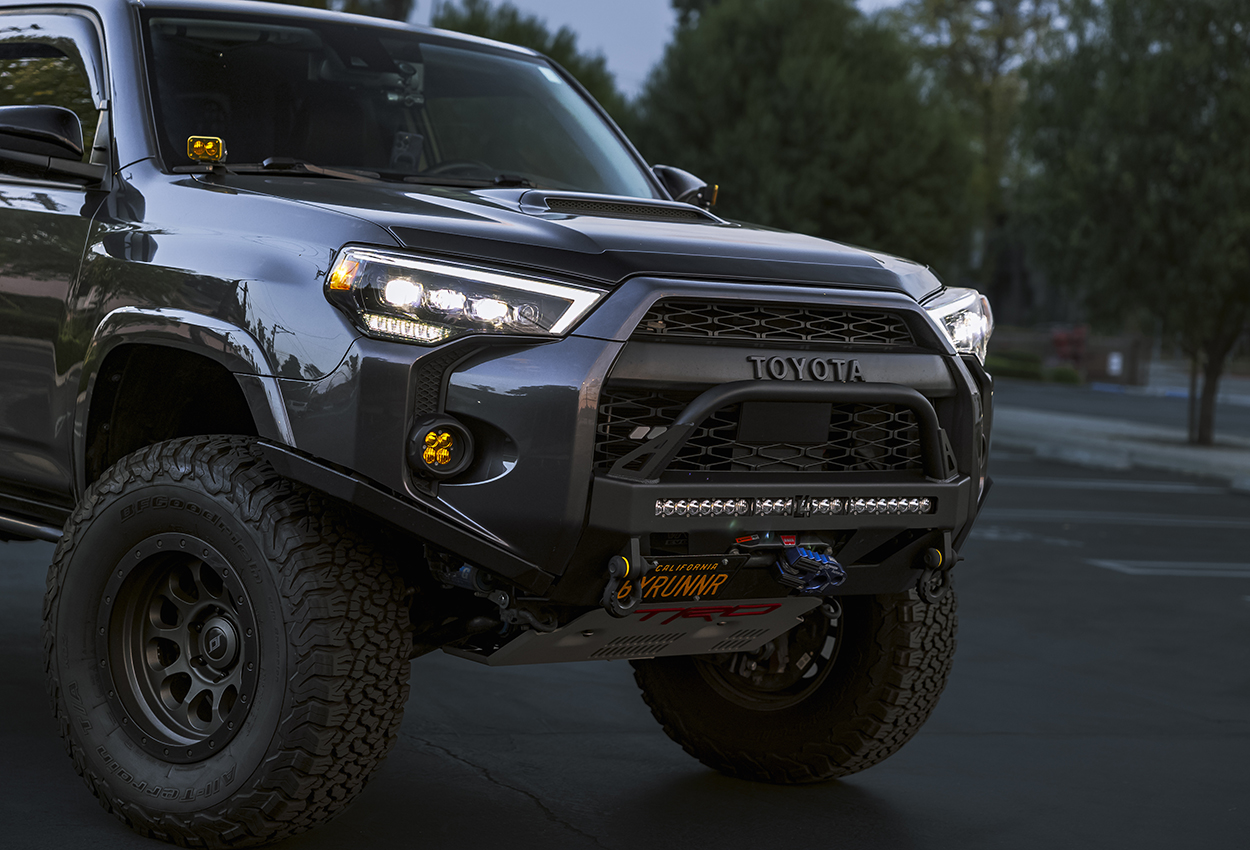 The AVS Lo-Pro hood deflector provides the sleekest design for the 4Runner. Its design will insure no damage when crawling through the mall or car washes. If you’re looking for a non-bulky hood deflector, this is the buy. 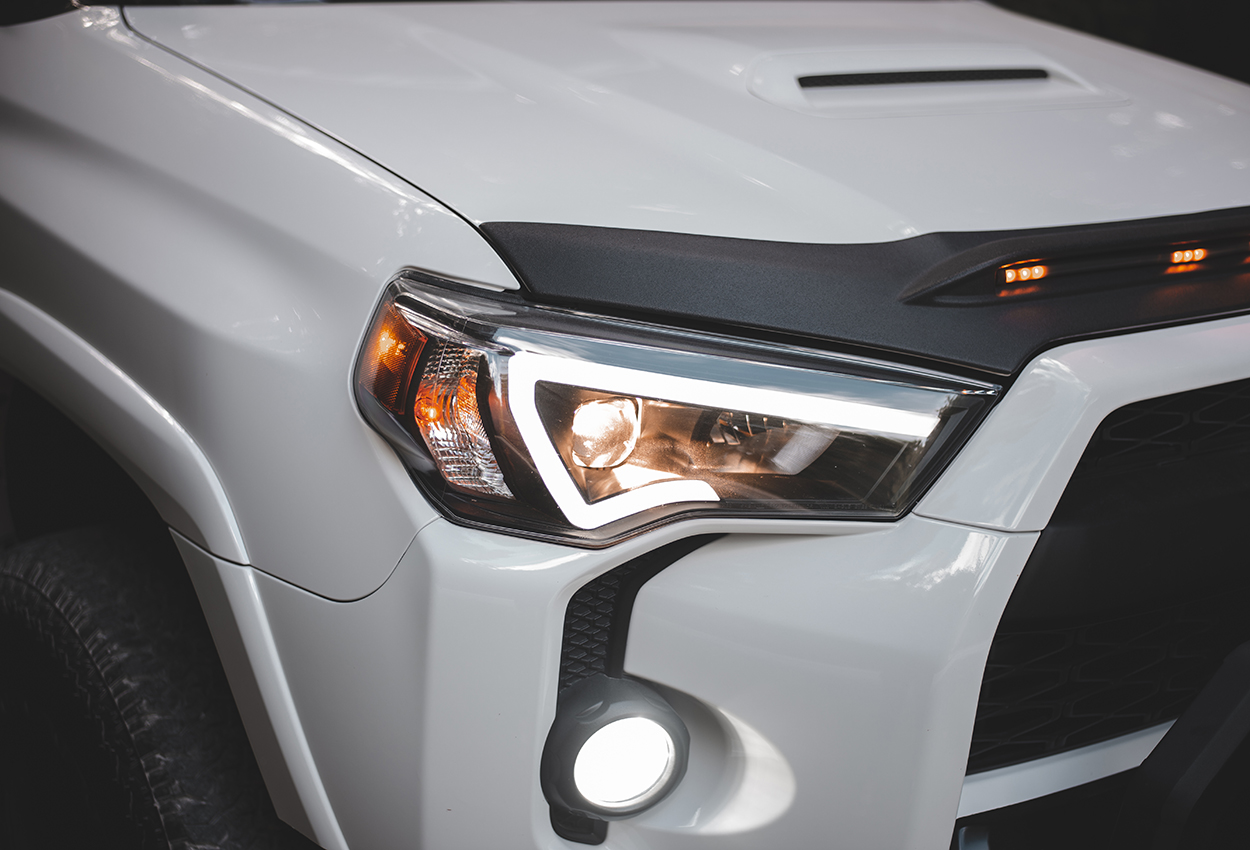 I personally think that the 4Runner looks so great with a hood deflector on the front. I debated for a long time if I wanted to put one on mine. When I finally did, I wished that I had never waited!

Overall, bug/stone hood deflectors are a great way to minimize damage to the body of your 4Runner while also making your rig stand out.

We want readers to get inspired by a variety of rigs/products. Submit your build for Feature Friday here to get featured. Next week we will be showcasing rigs with Rock Sliders w/ Kick Outs to help inspire your future modifications. If you would like to submit your build for next week, include your setup details and an awesome photo that shows it off.

I tried the AVS on my 2020 4runner and found that the hood took more effort to latch. It was almost like the provided plastic washers used for spacing were too think. My worry was that the hood would look closed but not actually latch completely. I contacted AVS, sent in a couple pics/video and they sent me new hardware but still had the same issue. Customer service was on point but in the end I had to return it.
I’ll be trying the Weather Tech next, just not the one with the adhesive.