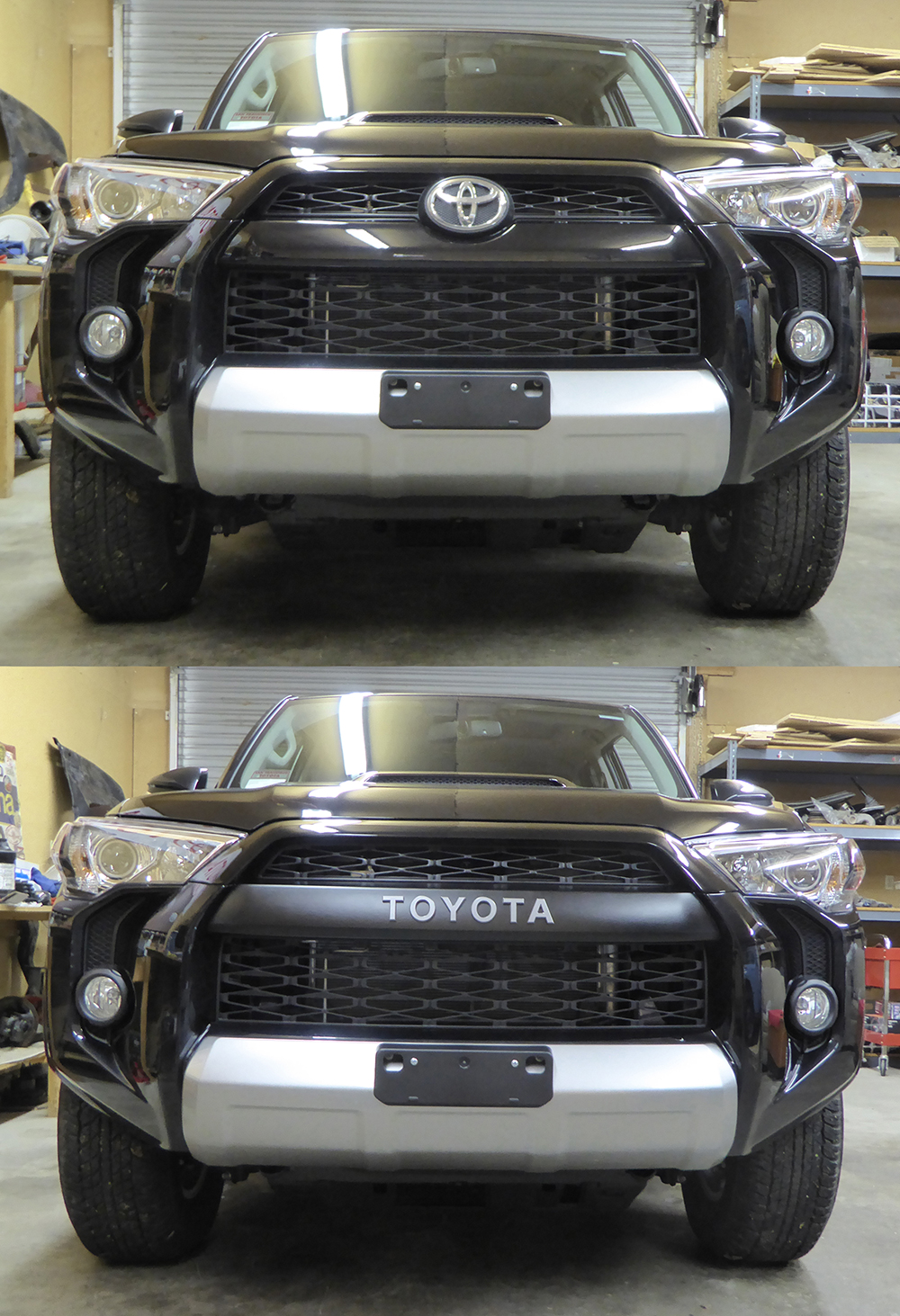 Well, this was an event that I did not have the opportunity to attend, however, I will enjoy writing the post for it. The guys did a TRD Pro Grill Swap on a 2016 4Runner.

All in all, the instructions were easy on this accessory. I was done in approximately 30 minutes. This is one of the most common TRD Pro add-ons that can be installed with little to no automotive experience.

The process is so easy, that you can do it with a small flat head screwdriver, Phillips screwdriver, and a 10mm socket/wrench.

For installation, you can do this with one person but it helps to have two. The kit comes with a 5-page detailed step-by-step instruction sheet and utilizes the existing hardware and OEM parts. This upgrade gives your 4Runner the TRD Pro look which is quite clean and rather classy in my opinion.

Just keep in mind when installing this kit that you don’t damage any of the parts during the process because you will be using the OEM parts to put the grill back together and back on. 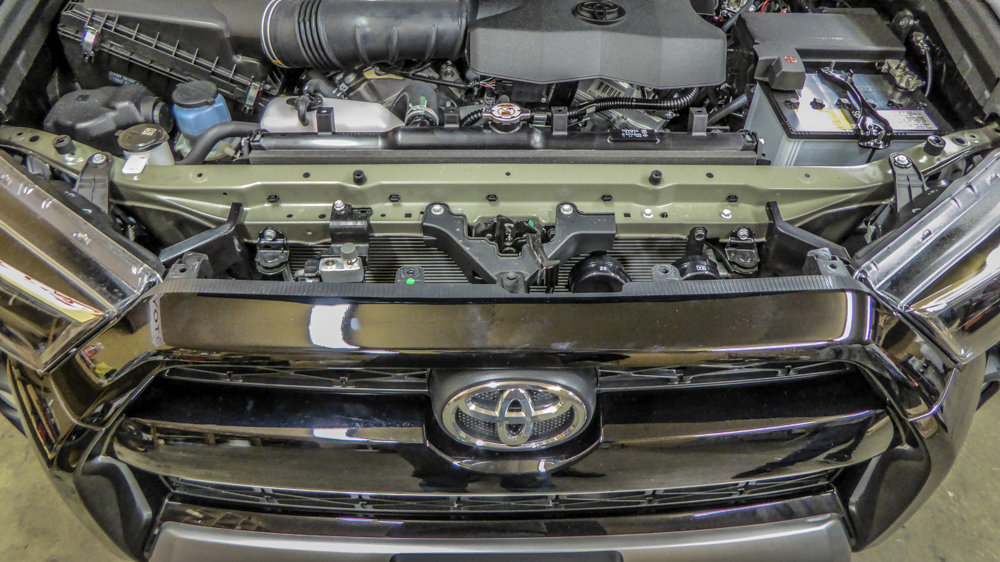 Open the hood and remove the 13 radiator cover clips as indicated in the image and then the radiator support cover.

To remove the push tabs, just press down and then pull them out. Once all the clips are removed you can extract the radiator support cover. Do not misplace the clips/ push tabs, you will be reusing them.

Step 2: Remove Parts and The Grill 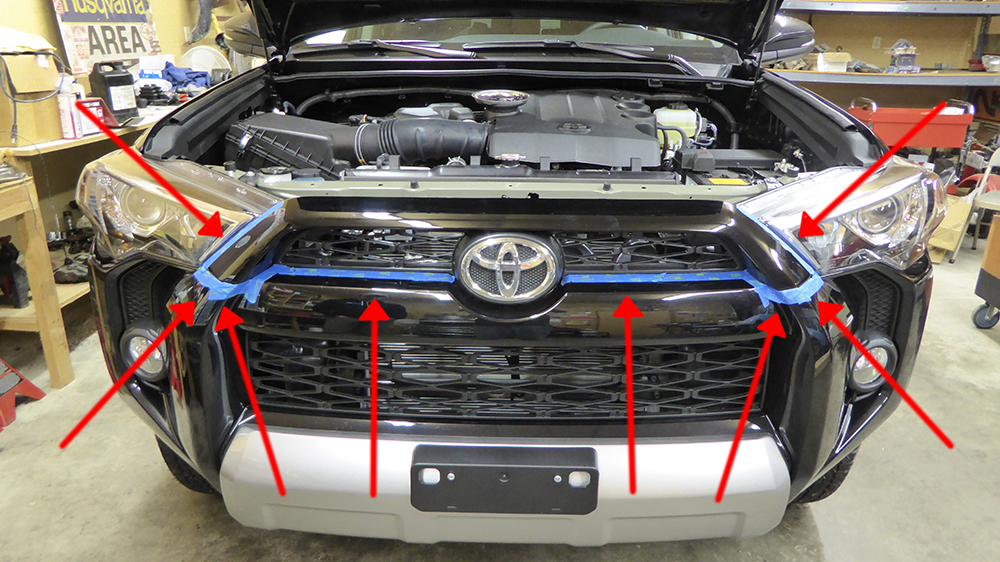 To avoid damage on the 4Runner, attach the blue masking tape around grill section that you will be removing, as well as the opposite side. This will aid in preventing scratches or rub marks during the removal process. Remove the two clips that attach the grill to the body and one 10mm bolt that is located in the center as indicated in the image. Then pull the grill to remove it. This was by far the hardest part of the install. We didn’t want to break the grill and it was quite tough to remove! Do not misplace the parts you’ve removed because you’ll be reusing them.

Step 3: Remove Grill Parts out of the bracket 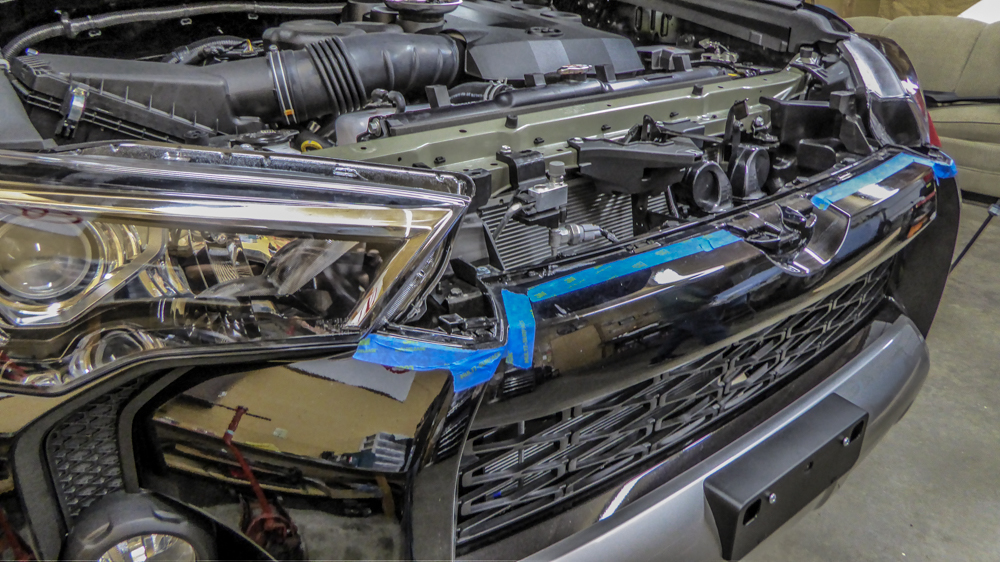 To avoid damage on the 4Runner when installing the garnish, attach the blue masking tape at the positions indicated. Degrease the area that the new garnish will be attaching to.  After degreasing the areas do not touch them.

Step 6: Preparation of Attaching the Garnish

We found it best to find the center of the garnish and the opening where the garnish will be placed. We marked those with a center line on a piece of blue tape. This gave us an easier target to get the garnish centered. 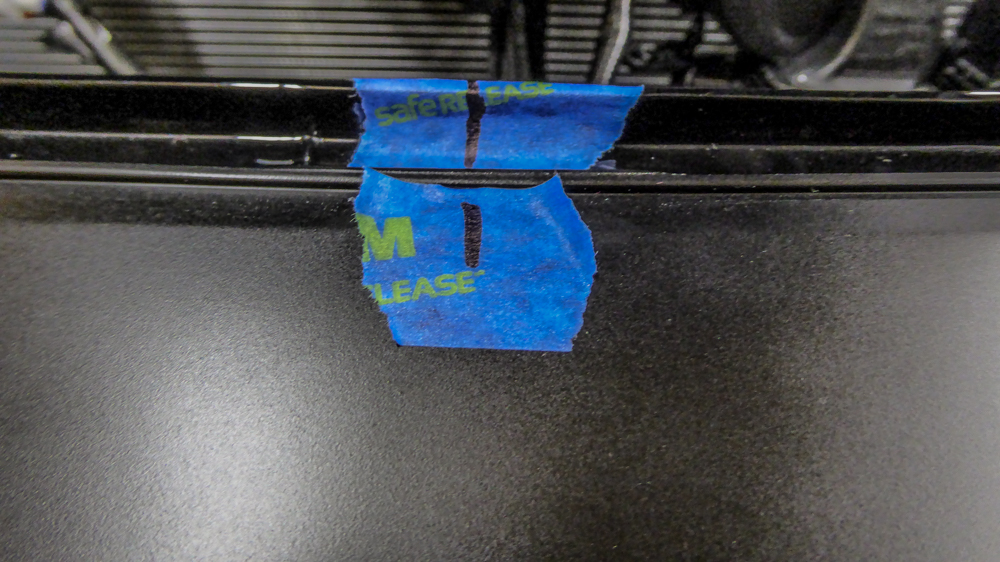 Line up the two center marks by eye the best you can and slide the garnish on. Apply minimum pressure to attach keeping pressure on the blue tape as you don’t want to lose it. Peel off the liner of the two-sided adhesive tape. Be careful when you pull the liners off as we broke one and had to use needle nose pliers to grab the broken end. We found it best to slightly lift the garnish to relieve some pressure when removing the liners from the tape. Then, crimp the garnish to the front bumper. 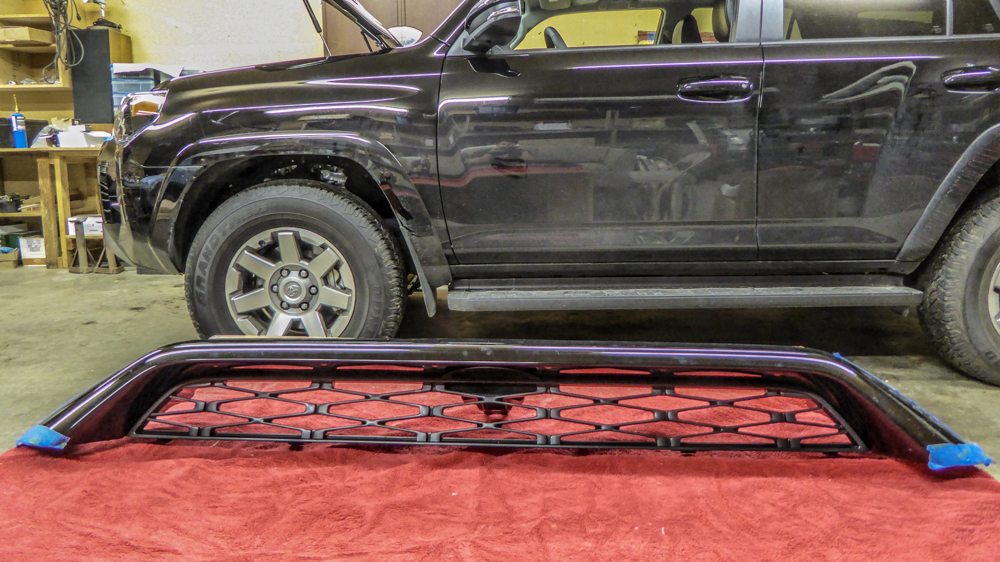 The grill clicks together with the front bumper in all eight positions. Secure the upper end of the grill with the clips and screw in bolt as indicated in the image. Peel off all the masking tape.

Place the radiator support cover on, then clip it down with the 13 clips. 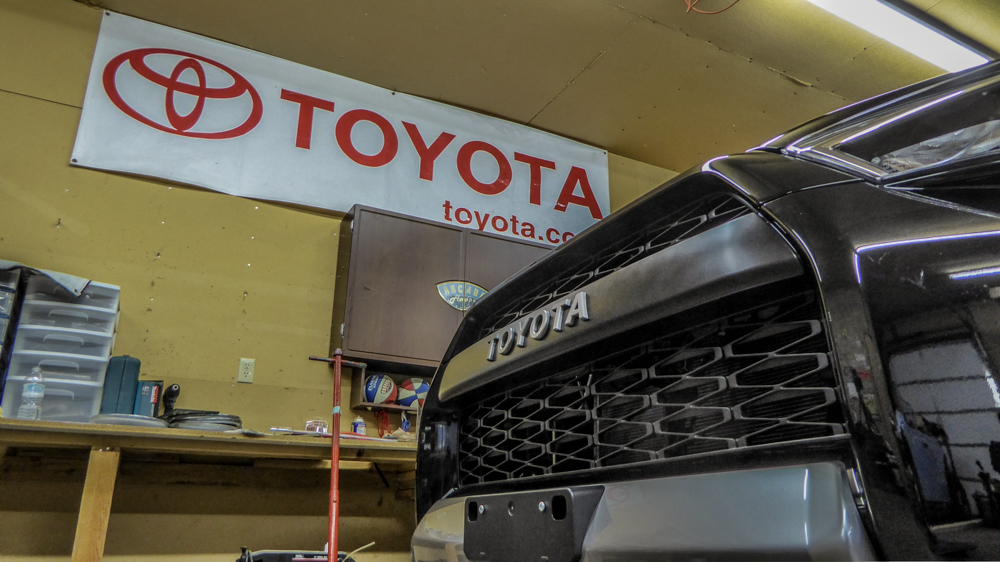 Just finished with the install. I went with the cheaper Chinese product but seems to fit as best as can be, it is an aftermarket product. Pretty easy, lining up the “garnish” was the hardest part, can’t really give tips, just trial and error before removing the tape covers. It’s going to go on how it wants, then hopefully it’s not too much off center and can be slightly adjusted by hand. Haven’t installed the letters yet.

I will be on my way to the dealership tonight to pick up my 2022 TRD Off-Road Premium. I’m wondering if changing the grille to the TRD Pro grille will mess with the front sensor for the adaptive cruise control? I was told it might take that feature away unless you buy the grille directly from Toyota.

I just do this on the same 2022 ORP. I removed the Toyota emblem from the grille and found it was just empty space behind. There’re no wires or sensors attached to the removed pieces. @Wheeler is correct.

I’m by no means a pro, but by looking at this and my own 4R I’m fairly certain all of those radar-y bits are just below the bar that you’re working on. I can’t see how you’d affect them unless you damaged them in the install. Take a look at a picture of a 2021 ORP and you’ll see a flat black box in the lower section of the grille.

my 4runner has came with a protective film on the front end – there is actually a strip on the current grille center piece that will be covered by the garnish. Does anyone know if that needs to be removed prior to installing the new garnish? Thanks!

Hi, so I bit the bullet all went well on my 2018 I painted it matt black and letters as I have heard other places it can fade and painting rectifies it. my semi random question is in my reinstall had my screws and push pins sitting in a parts holder the yellow ones from harbor freight. well I accidentally hit it and the little silver screw that hold the grill back in place flew everywhere found 4 and foundall but 2 of the push pins. so back to the question do you or anyone reading know what size and type those screws are. to be clear the ones in step 3 described here: (Remove the four screws from the bracket with a phillips screwdriver as indicated in the image and then remove the bracket from the grill. Remove the six remaining screws)

Are the TOYOTA letters on the OEM just taped on or are they screwed on?

It’s 3m tape on the backside. You can see a good example here.

I just installed mine. I strictly followed the alignment based on the indentions on the top of garnish, with the grill. My garnish is now off center, one side of the garnish is pushed all the up against the grill surround, and there is a big gap on the other side. Could i remove the garnish and try to re install it with new 3m tape? Or would you recommend taking this to a body shop at this point?

Hi there. Did your readjustment come out perfect? I just installed my OEM Pro grill too and did a test fit by lining up the notches on the grill and garnish…I noticed that one side was closer than the other side. I moved it over a bit and was pleased. After pressing on it it must have shifted ever so slightly as one side has an extra mm wider gap than the other….but definitely not like how you had it originally with one side flush against the grill surround.

I know they are supposed to have a gap but it seems quite tough to get it perfectly centered. I just wish it was cut to fit so it wouldn’t have any gaps.

Thank you for your reply. That is a good idea…ill do that if I do decide to readjust. The driver’s side gap is just a tad bigger than the passenger side gap. I actually picked a point and measured about a 1-2mm difference between the gaps. It’s not too bad…Im a perfectionist but I think I can live with it. It’s more noticeable when you a foot away from it.

Did you figure this out? I did the same thing

Sorry for the delay. The email went to my spam folder!
I took a hair dryer and heated up the garnish piece and peeled it off. I bought some 3m take from an auto store and replaced the tape and reset it.

Would this work on a 2020 Trd off Road Premium? Also, what is a reliable source to order one from since Toyota won’t allow it anymore. Thank you!

Did you manage to figure out how to install the TRD pro grille on the off-road model? Toyota was saying it isn’t doable for 2020 but i’m not really buying it.

We just finished installing the grille on a 2020 Offroad, you have to trim the piece as it slides over the TSS, and also the radiator upper support, wasnt that big of a deal.

Looking for answers on this too.

For a 2020 4runner the process is the same as listed in the article, just use new (2020 version) grill parts that have a slight cutout for the TSS sensor.

Thanks for the info. Just got my new 2020 TRD Off Road premium. Anyone know of a ladder system for the SIDE of the truck rear? One that doesn’t need to be bolted to the big metal rear bumper replacement??
Also, whats a good full length flat mesh rack, that will still allow my sunroof to open?

You really want a rear bumper for a side ladder. SSO makes a side ladder and rear bumper combo. A good full-length mesh rack would be the Gobi, Baja or even the ARB Flat rack, although it’s not 100% “full”.

Should clarify, i’m asking about changing out the grills on the 2020 4Runner.

Is the 2020 4Runner still 5th gen? And anyone know how to change out the grill on a TRD off road to the TRD pro grill? I think the censors are in the toyota logo, so how is that going to work?

Not 100% on limited. Hopefully, someone with a limited can chime in here.

For what it’s worth, I spent the better part of the day fighting this and I’m not saying it can’t be done, but installing this on a 2017 Limited isn’t this straight forward. At this point, my thinking is that the chrome trim on the bumper (right below the logo) that this adheres to needs to be removed. Without removing it, it seems that the grill piece is too thick for this to adhere securely to the grill. If anyone has any thoughts on how to remove that trim or any other suggestions, I can use all the help I can find right now.

Having said all of that, thanks for the instructions Brenan – everything you had was spot on…until I ran into this issue with the chrome trim. I appreciate all of the walkthrough’s – they’ve been a tremendous help.

Thanks and good luck!

Did anybody ever figure this out about the chrome trim piece?

Can this grill replacement kit be used on a 2019 4runner Limited Nightshade edition front or strictly for the TRD models for replacement grills??

How does the matte finish on the garnish hold up to automatic car washed (with brushes?)

It would be nice to have a blackout kit for the “TOYOTA” replacement if the previous one was blacked-out. I like the complete blacked-out appearance, so this mod would make it much more appealing if one existed for the letters too. Also, I did not quite understand if the new TRD Pro grill needs to be painted to match the finish. In my case, I have the factory black for 2017 year and I also have a ceramic coating on the entire body. I am sure both need to be done to have a completely seamless look and feel.

Mine came with black med out letters

Yeah, I guess plasti-dip is going to be on your side for this one.