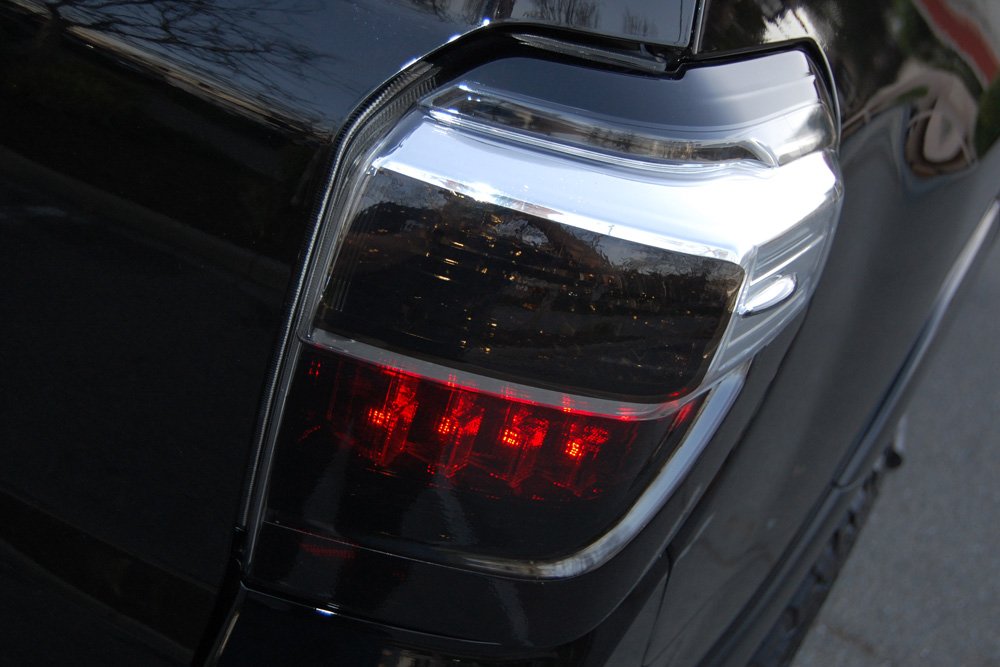 Remember the days of the Honda Civic euro taillights… and how god awful they were?

Cheap plastic-looking carbon fiber and painted on chrome that at the right reflection of the sun, could burn an ant to a crisp!

But, we evolved.  And, so did the automotive manufacturers.

OEM took on a whole new meaning and keeping a stock look garnered its own level of respect. 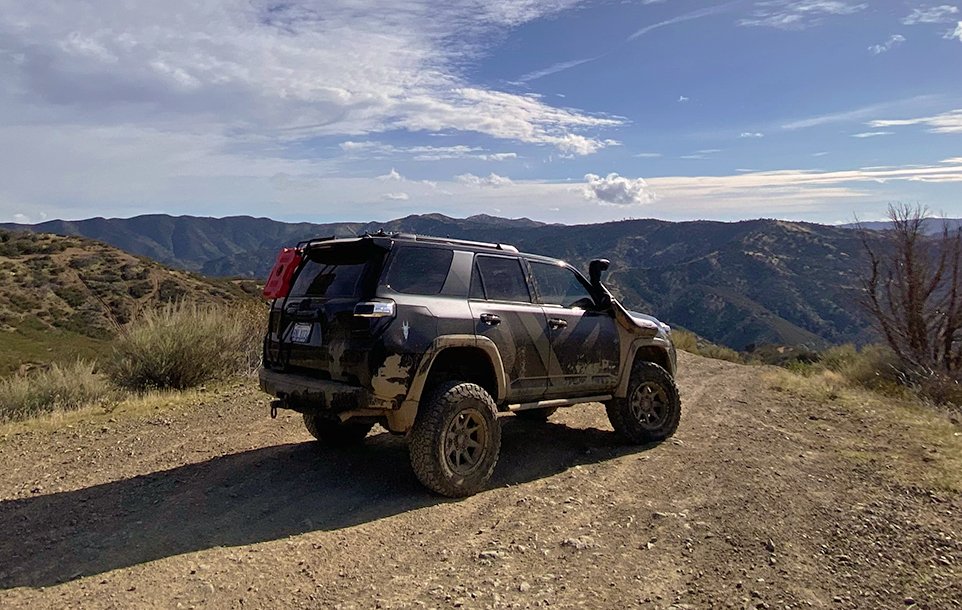 The 4Runner sales were down and Toyota made some changes to the 5th generation platform.

These changes included an updated interior, a more open-mouthed grille, sleeker headlights and LED taillights.  Some of us with the v1 (2010-2013) platform we’re a little jealous and went as far as doing front-end conversions.

If you’re like me, you went the cheaper route and just swapped out the standard red and clear taillights for the v2 version.  Then all of a sudden, companies like Unique Style Racing and Kustom 54 started offering their own versions of the v2 taillights blacked out ranging from $300 – $750.

So, if you’re looking for that same blacked-out look at a fraction of the price, look no further than Lamin-X.

Lamin-X has been known in the industry for quite some time offering DIY film kits to alter the color of headlights, taillights, fogs and even light bars.

They even sell kits that protect your door cups along with precise door edge trim guard pieces.

Their kits include a small squeegee, an XACTO-knife and even a tiny spray bottle for wet applications.  And much to our luck, they just released their DIY taillight kit for the v2 (14+) 4Runner! 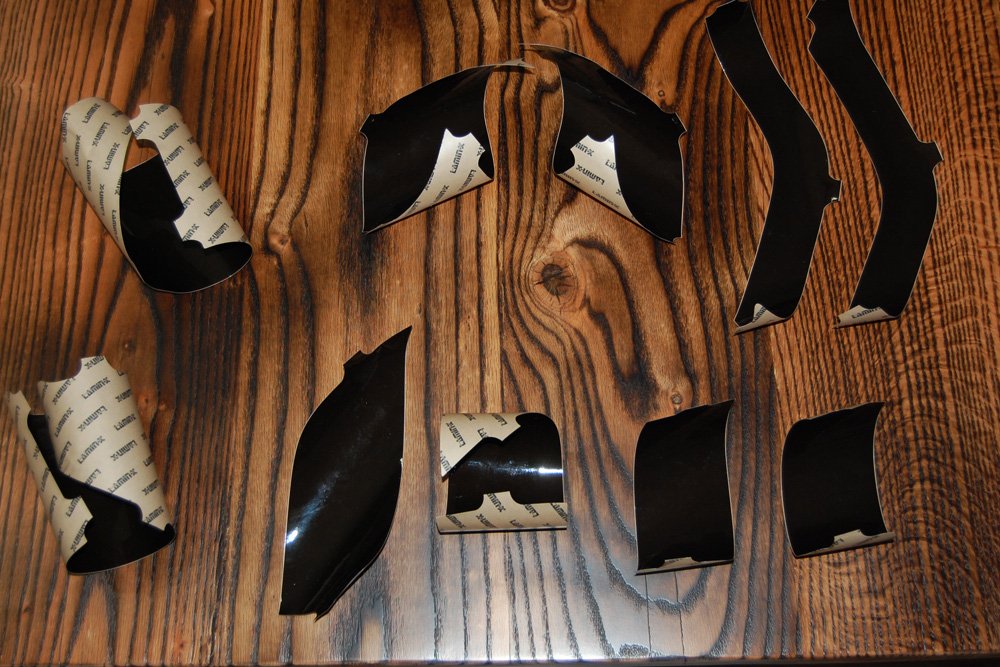 As mentioned above, the taillight tint kit comes with a small squeegee, an XACTO-knife and a tiny spray bottle for wet applications.

In terms of the vinyl tint, each taillight has four (4) pre-cut pieces:

Lamin-X covers its products with a 5-year warranty and ships within 2-3 business days. 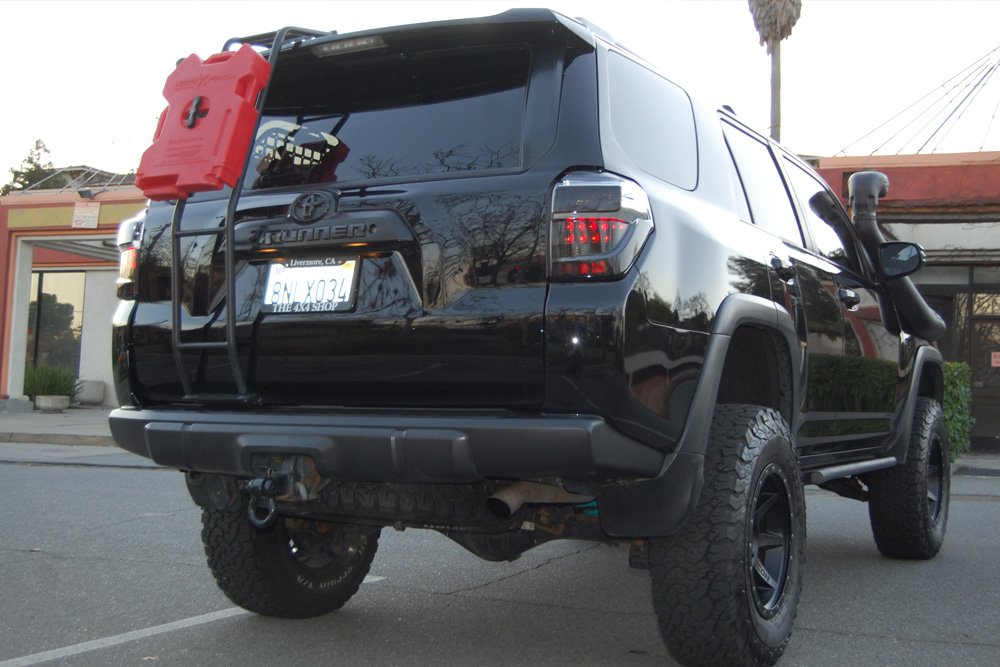 If you’ve never applied tint or a vinyl wrap, don’t stress.  The Lamin-X film is not only thick and easy to stretch and work with, but it’s very forgiving!  For all intents and purposes, this is truly a DIY kit.

That’s pretty straightforward… clean ‘em nice and good and remove any debris, grease and the exoskeleton of any dead bugs.

Once your freshly cleaned taillights are dry, it’s now time to start applying the film.

Using the tiny spray bottle, pick a section to start with and apply a light mist in that area making sure to cover where the vinyl will be applied.  We opted to start with the reverse covers (#T2649).

Each piece of the film comes with “handling tabs” on each end.  These tabs will be cut off after you’re satisfied with the application and they allow you to use your fingers without getting oil trapped underneath the films finish.

Starting from the left or right, start applying the film.

Once you have one edge secured and lined up properly, spray a light mist on the top side of the vinyl, grab the squeegee and start applying pressure as you apply the remainder of the vinyl.  This is referred to as the wet application method. The object here is to push the misted water off of the surface of the taillight and the topcoat mist helps guide the squeegee along with the vinyl without damaging it.

This method also helps reduce any air trapped in between the lens and the vinyl.

Step 2a. Need to try again?

Again, don’t fret. The Lamin-X film is thick and maneuverable.

Grab the handling tab where the film needs to be realigned, spray again with a light mist, and try again.  You’ll see that the film is very forgiving.

If for whatever reason you’re having a hard time removing a small air/water bubble or two, a combination of sunlight and evaporation will correct that over a few weeks.

Plus, if someone is that close to your taillights to notice, you may be getting rear-ended.

Happy with how it looks? Great! Now, start removing the handling tabs.  Using the XACTO-knife, remove the tab by following the natural curvature/shape of that particular piece of film.

No need to rinse, but once you’ve mastered your first piece, we suggest applying the same exact piece on the opposite taillight.

Each piece is uniquely shaped, and we felt like it helped to be consistent between pieces vs. finishing one taillight first and then moving to the other.

That’s really it for the installation!

We were pretty meticulous on this project and all-in, it took us less than 20 minutes to complete.

Don’t stress if it takes a bit longer than 20 minutes, but remember the Mae West quote, “You only live once, but if you do it right, once is enough.”

As you can see from the photos, the v2 taillights have a lot of black in them and it helps make the project pretty forgiving.  If it looks good and you’re not a professional tinter, grab a cold one and celebrate your new mod! 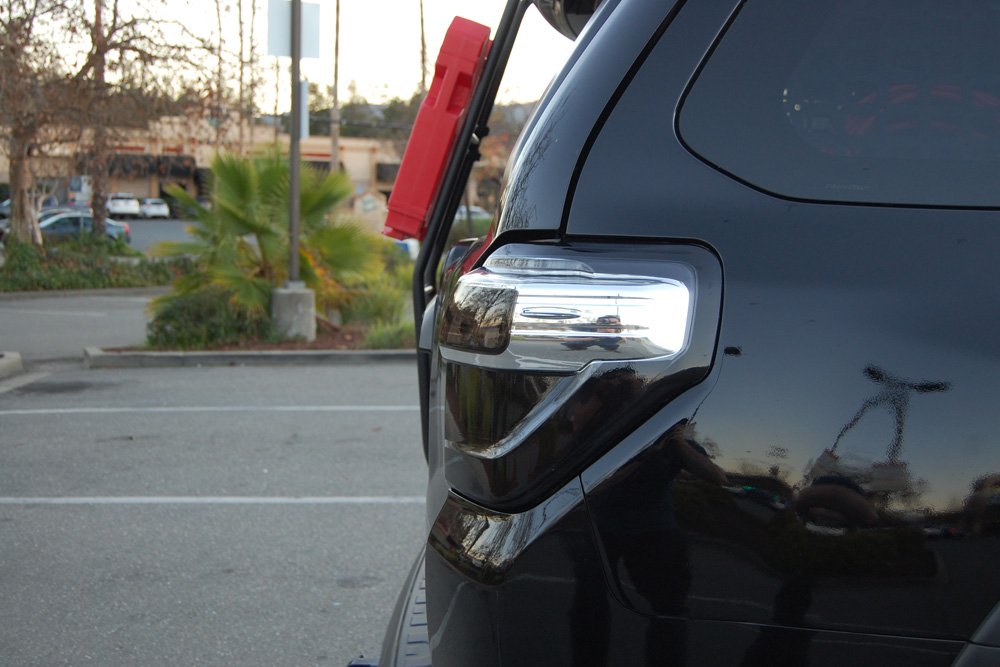 In all fairness, I’m surprised I was able to put this many words together for one of the simplest mods we’ve done to our 4Runner.

However, we had to do justice for this product and for Lamin-X as a whole.

Last year, we used their yellow film to cover our lo pro lightbar and we’re very happy with the end result.  It’s been about a year and many wheeling trips later, the film looks unscathed.

At just under $20 to give the impression of blacked-out taillights, this one not only helps the old bank, but it may also just give you that blacked-out look you’ve been trying to achieve.

I’m not sure where or how goes the T249? I also don’t find it on the Lamin-X website? It’s like the T2649 (brake reverse cover) and T1149 (Rear reflector cover) combined together?

Also, in your last picture, there’s no cover for the part we see your reflection in (Right of the T449 – rear turn signal) or you just didn’t ordered it?

On the Lamin-x website there’s two other pieces… T4149 – Tail Light cover. Did you know what piece is it? Is it the missing piece? Maybe it’s this other one… T549 – Reflector delete cover? I don’t think it’s the good shape tough?

Are you sure you choose the color Tint? It’s seems too dark to be it? Is it Gunsmoke, Smoked or Charcoal?

Matt
Reply to  Will

Did you ever find out which piece to get that covers the chrome side piece exposed in his last picture above?

Are there any state restrictions on these tints? For example, I have seen “black out lights” are not technically legal in certain states. Would these ever cause an issue? I’m mil and move every few years

What color film did you pick for your vehicle?

I’m pretty sure that was straight up “Tint”. I imagine red would look rad but maybe too close to the 10-13 OEM lenses.

The dark tint is the “Charcoal” tint 🙂