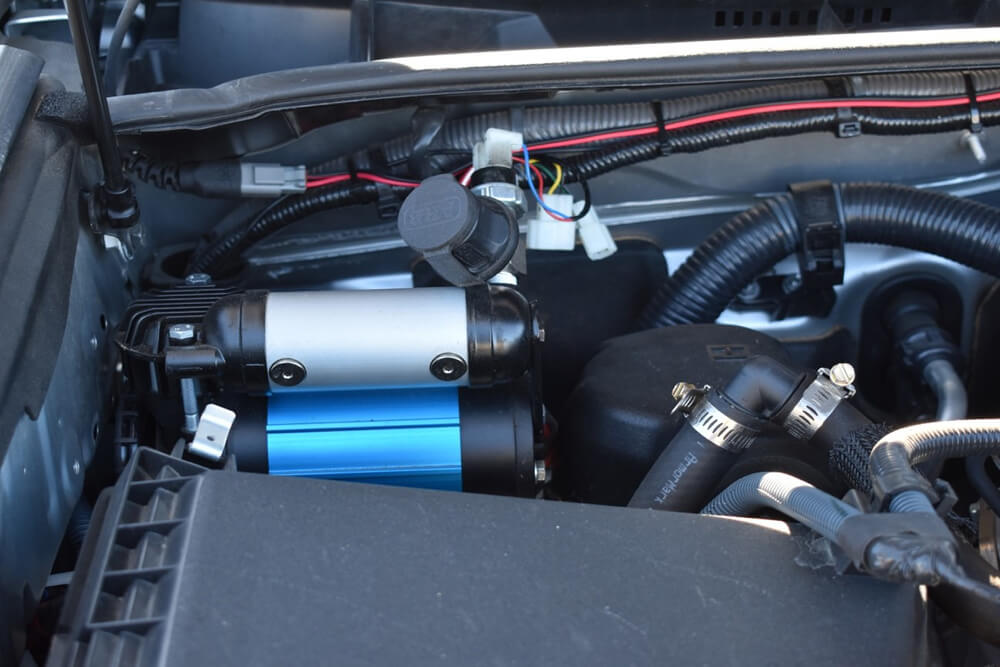 There are many dual batteries and onboard air compressor options available for a 5th Gen 4Runner.

Shrockworks, Genesis, C4 Fab, Sponsored by Wifey, DIY and the recently installed compressor with Slee bracket are all options for setting up a second battery or air compressor in your rig. It can get a little overwhelming when making the decision.

All the compressor mounts have a unique way of setting up their systems and it depends on how many other accessories you have, and where they are located, in order to determine which mount to choose.

Some of the other main factors may include a secondary battery, a larger intake or even a switch panel.

There are two choices when it comes to where to mount the second battery. Either battery mount options belong on the passenger side. The first option is against the firewall (closer to the cabin) or directly over the air injection pump (closer to the 4Runner grille).

Each of these has pros and cons and both decisions may influence where your air compressor is installed. Some research, vision and ultimately preparing for the future of your build will help select the appropriate setup. 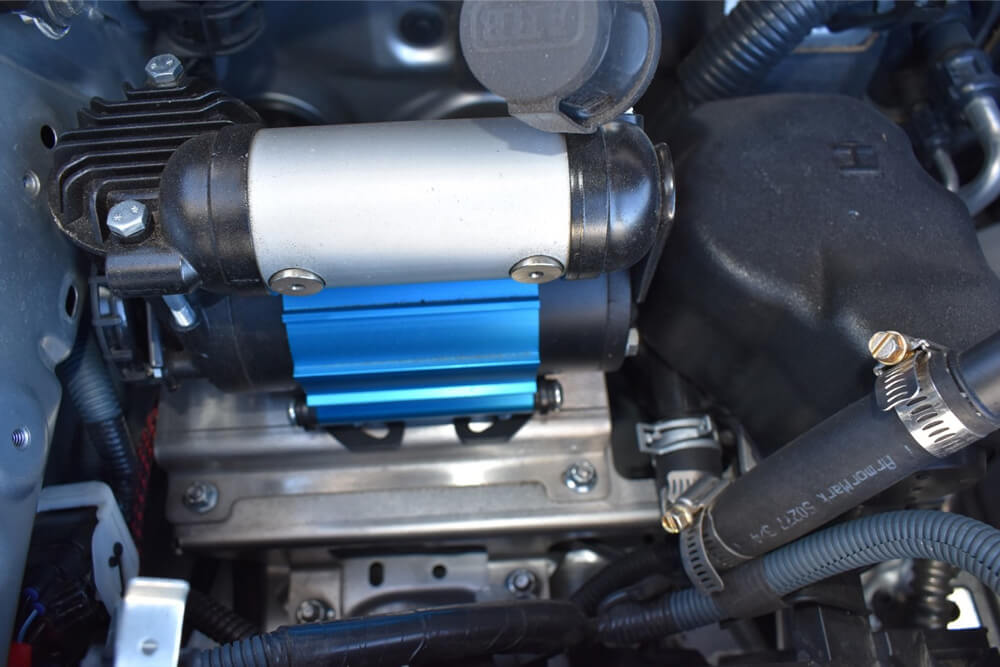 Most kits utilize the passenger rear area under the hood for the second battery.

I initially had some concerns about the weight riding back there without solid reinforcement. Most people get by just fine putting the second battery in that rear location. I’m more of a “what-if” guy.

Choosing to keep it opposite the starting battery was an easy decision due to that area being a mirror image of the driver side. On the 5th Gen 4Runner, the smog pump is currently located there.

Another obstacle to tackle. I ultimately went with Shrockworks for their battery/ACR mounting tray, as well as their use of the forward portion of the engine compartment for the secondary battery. There are three options when choosing the kit.

There is the standard kit to relocate the pump, another option for an aftermarket washer fluid tank (definitely a good option for high clearance bumpers) and a single ARB compressor mount that will adapt to the standard smog pump mount plate. I had previously purchased a single compressor that I was initially going to mount on the driver side under the hood.

I ultimately went with the ARB mount because it utilizes the space that would normally be empty. 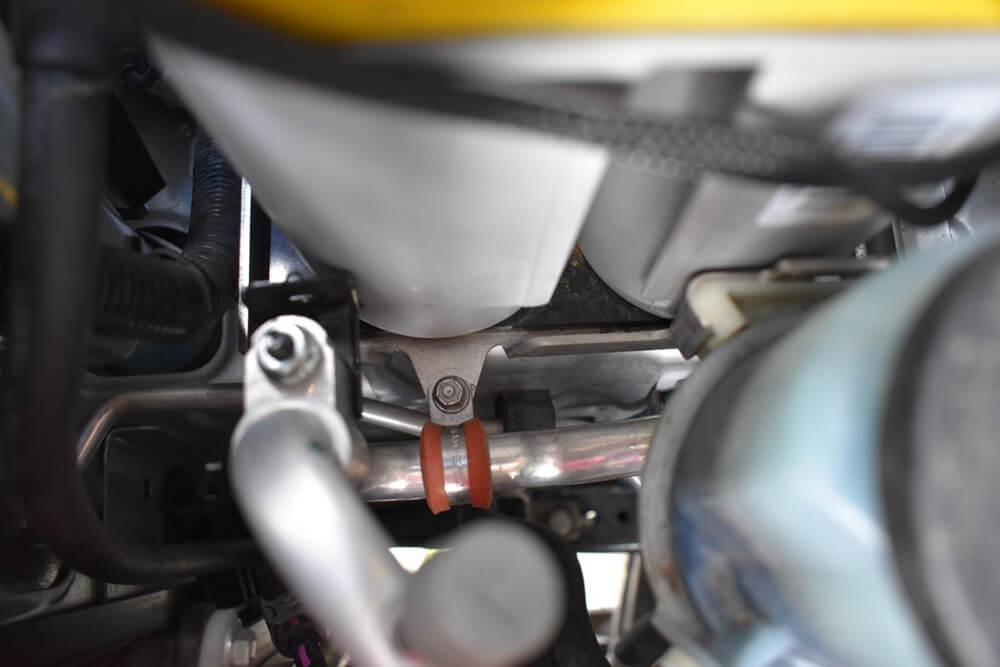 Shrockworks supplies all hardware needed to install the new mount in the rear of the engine compartment, as well as all of the necessary hardware/fittings for modifying the existing smog pump hoses to route to the new location.

Nothing too difficult and the directions were spot-on. No ingenuity required.

*Disclaimer: I did not plumb the smog pump the same way Shrockworks specifies in the directions.

My issue was with a small amount of rubbing on the rear airbox lid clip. I may have cut the hose to the wrong measurements.

In any case, it was rubbing more than I am comfortable with. I went to the local auto parts store and bought two ¾” elbows and about a foot of ¾” hose. I cut and fit a new route for the hose to avoid all the rubbing.

This part is pretty straight forward.

Once the smog pump is located to the rear, this area is now open for business.

There are two minor adjustments that need to be made before the tray sits perfectly:

After those two tasks are complete, it’s all downhill from there. The new battery tray liner is included to protect the bottom of the battery from the mounting bolts for the battery tray. 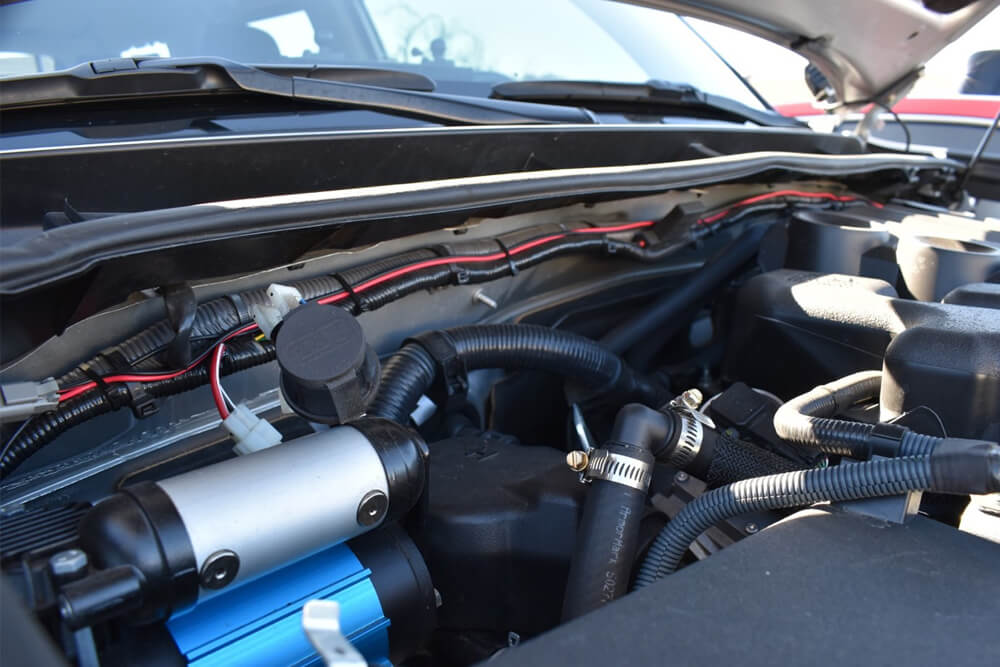 Mounting the compressor can be done before or after the smog pump mount is installed.

The compressor comes with a relay and switch built into the harness. I run a sPod to control most of my accessories, including the compressor.

I initially figured the relay in the sPod would serve the same purpose. Not exactly. After realizing my error, I hooked the compressor to the battery and the switch ends to the sPod.

Shrockworks made provisions on the backside of the mount for the relay to be securely mounted. As you can see below, I routed the harness along the upper firewall to maintain access to the fuse located directly in the middle of the power cable.

Do yourself a huge favor and take your time.

Most mounts under the hood are pretty sharp and will eat through the wires quickly if not secured properly. A few minutes will save a huge headache on the trail. 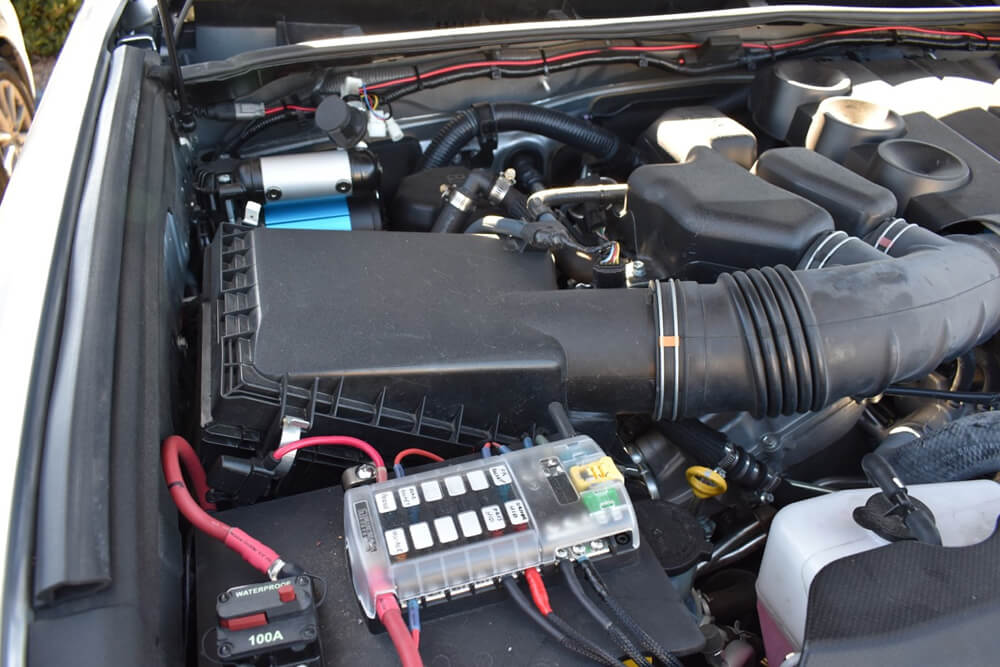 The construction and workmanship of the mount are top-notch.

Manufactured from heavy gauge stainless steel and plenty strong to support the ARB compressor for years to come. I have zero regrets about going with this compressor mount because it solved two problems for me.

One, I wanted the second battery in the front of the engine compartment. Second, I wanted an onboard compressor. It’s very clean and highly functional.

I couldn’t be happier with the way it turned out.

I wired mine to the battery using the provided harness. You can certainly use a fuse block as long as it’s always hot. Otherwise, the relay won’t work as advertised.

Reviving this thread. This is exactly what I’ll be installing, BUT I want to attempt a twin ARB. After install, looking back do you think you could get a twin in with this kit? I sent an email to Shrockworks, by wanted to get an end user opinion too.

I have since upgraded to a twin keeping the Shrockworks mount. I went through a guy on http://www.toyota-4runner.org. If you go to the site and search “bandi”, it’ll go straight to his for sale ad. I went with option 1. It mounts to the Shrockworks pump relocation kit. I just removed the single pump mount from the base. One thing I also did was install an ARB manifold under the pump. It gets hot. Really hot if you run a hose straight out of the top port on the pump. Adding the manifold eliminated the heat issue blowing out hose ends when airing up more than four tires. I absolutely love the setup. The single was awesome and worked great. The twin stepped the game up a bit. I can carry an impact gun now. Hope this helps.

Man thanks for getting back with me so quick… Sitting in my garage now trying to figure out if the Viair 450 would work with the 5 gallon multi port tank I’ve got!

But now I’m refocused on ARB since you mentioned Bandi. Yup, I’m familiar with him and now that you told me this, I’ll reach out to him.

Can I see you shrockwork dual battery system setup?

Shoot me a DM on IG with your email and I can send you some pics with a little synopsis. Or, my email is under my profile here. You can send me an email like that. Either way works.

Perfect, thanks for the intel.

No worries. Glad it was helpful.

I just don’t want to go go through the firewall for anything. Can you you keep it all under the hood?

Absolutely. You can hook it up to almost any kind of switch under the hood. The compressor comes with a rocker switch. All you’d have to do is find a convenient place to mount the switch. The diagram that comes with the compressor has it laid out like that. As a stand alone switch.

Saw the attached article. I think i’d wire it to be switched under the hood to keep the wiring contained and as a separate unit. Thoughts?

I run my compressor with an sPod. It’s all contained under the hood. Just the control cable from the sPod runs into the cabin, through the drivers side.

The weight of the mounts themselves are 3-4 pounds. The real weight comes in with the secondary battery. The wiring is simple. No cutting into existing wiring. The smog pump relocation kit includes a plug-n-play extension. That had to be routed under the air box to get enough length to reach the new position.

How much weight are you adding and as for the wiring, do you have to cut into anything?

Thanks for the feedback. I didn’t realize it used the new smog pump bracket as a base.

You certainly could. They will force you to spend extra money for all the stuff you don’t need, but it’s certajnly possible. You’ll have to get the smog pump relocation kit (base bracket) as well as the adapter bracket for the compressor. Honestly, it’ll be way more expensive to do it this way than a different bracket from somewhere else. Most likely mounted on the drivers side though. But, it can be done.

Could you install this bracket with only the ARB compressor? I am not adding a second battery and have no need to relocate the air injection pump. The Shrockworks site makes it sound like you have to relocate the pump to install the bracket.