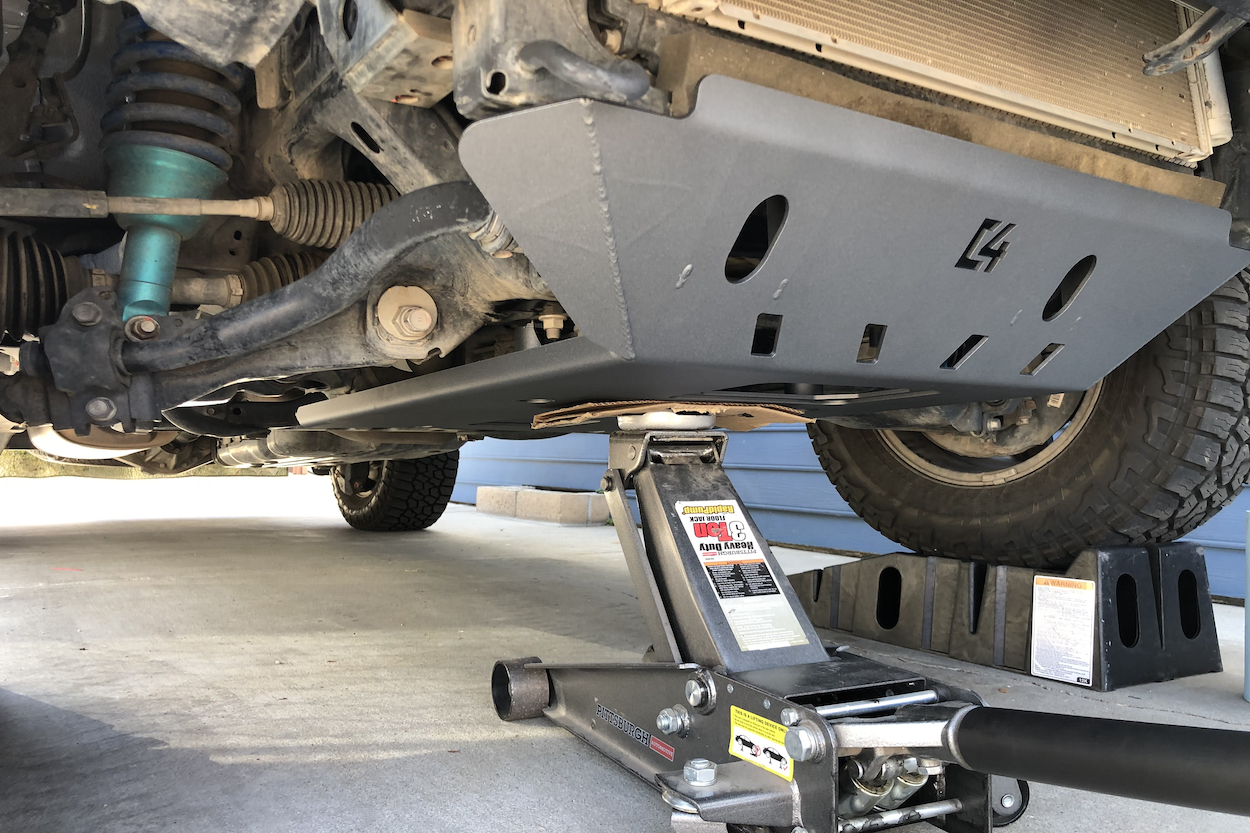 C4 Fabrication is based out of South Dakota is one of the most well-known armor fabricators on the market today. Their armor is known to protect your critical components while taking a beating so that you can make it back home.

This write-up won’t be a deep dive into the skid plates themselves, check that out here and for painting, here. 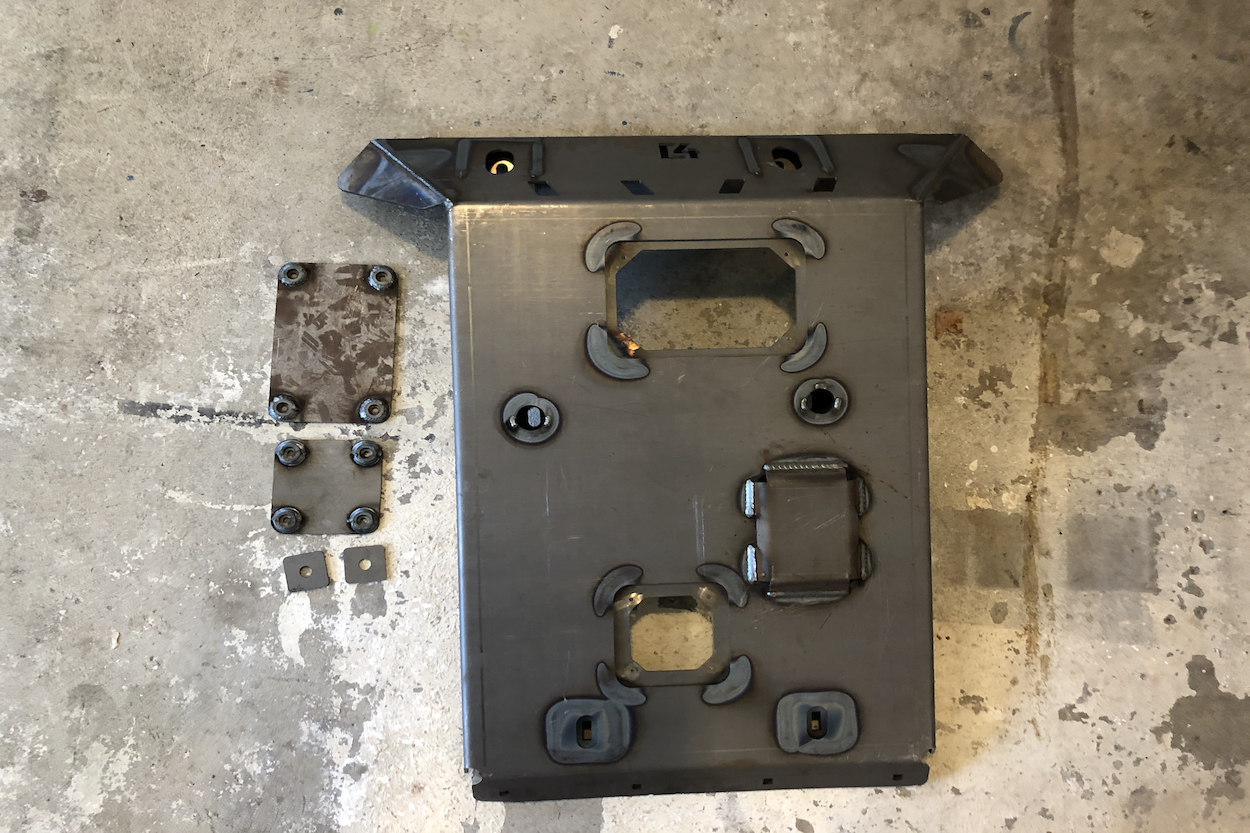 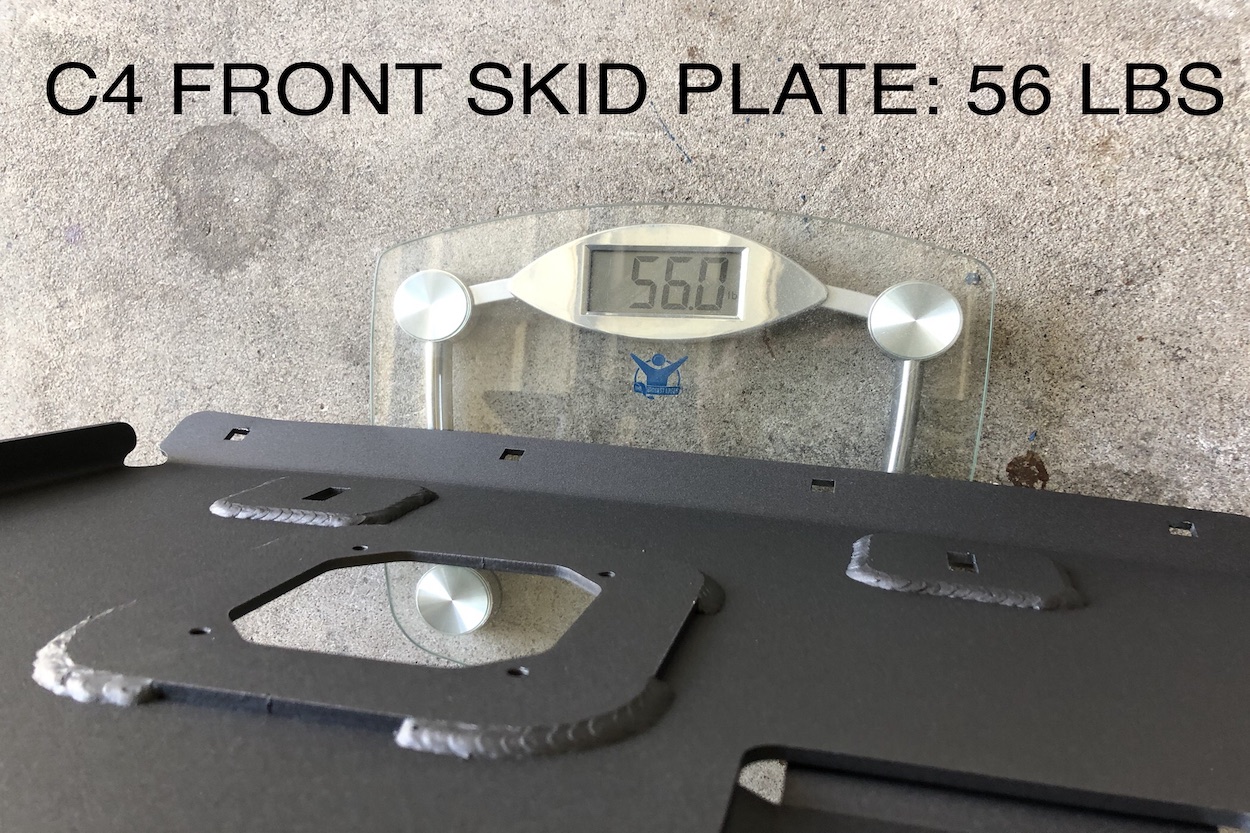 Just for reference, the steel skid plate itself is 56 LBS. 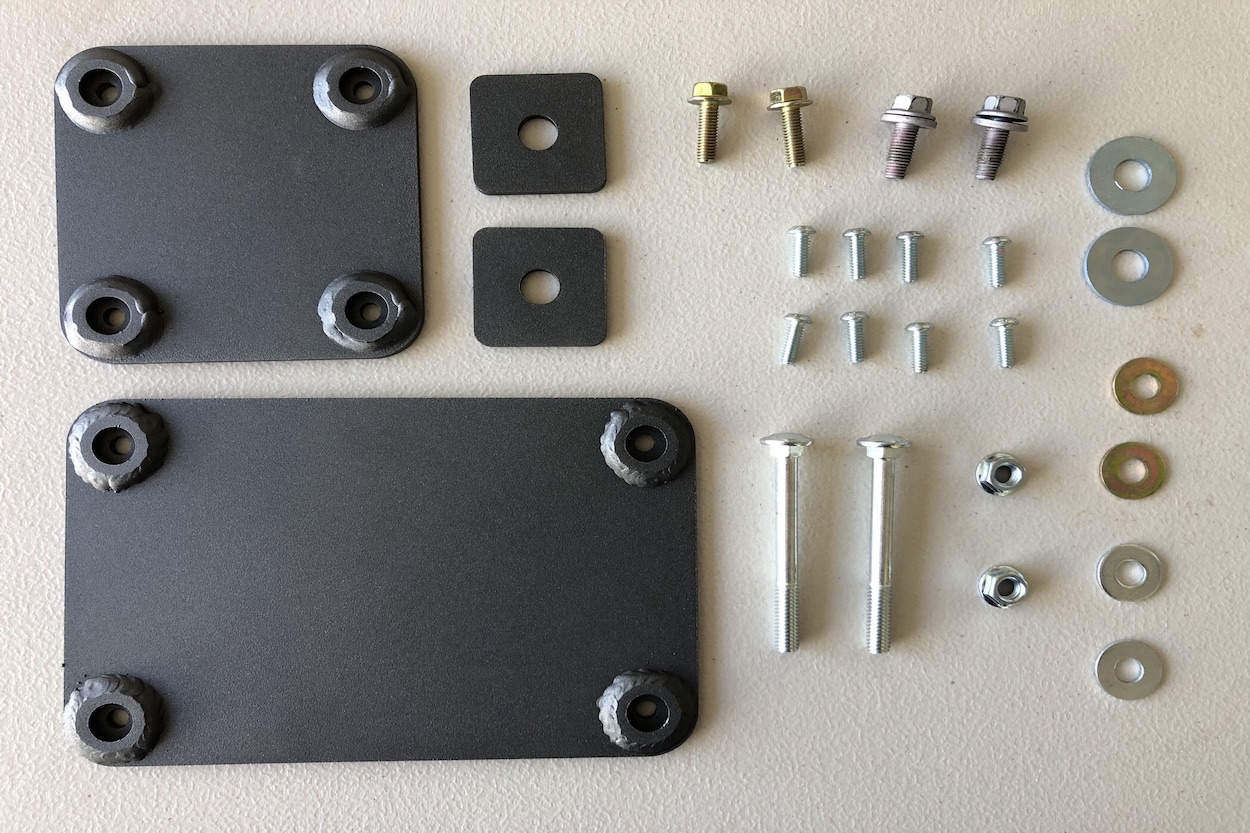 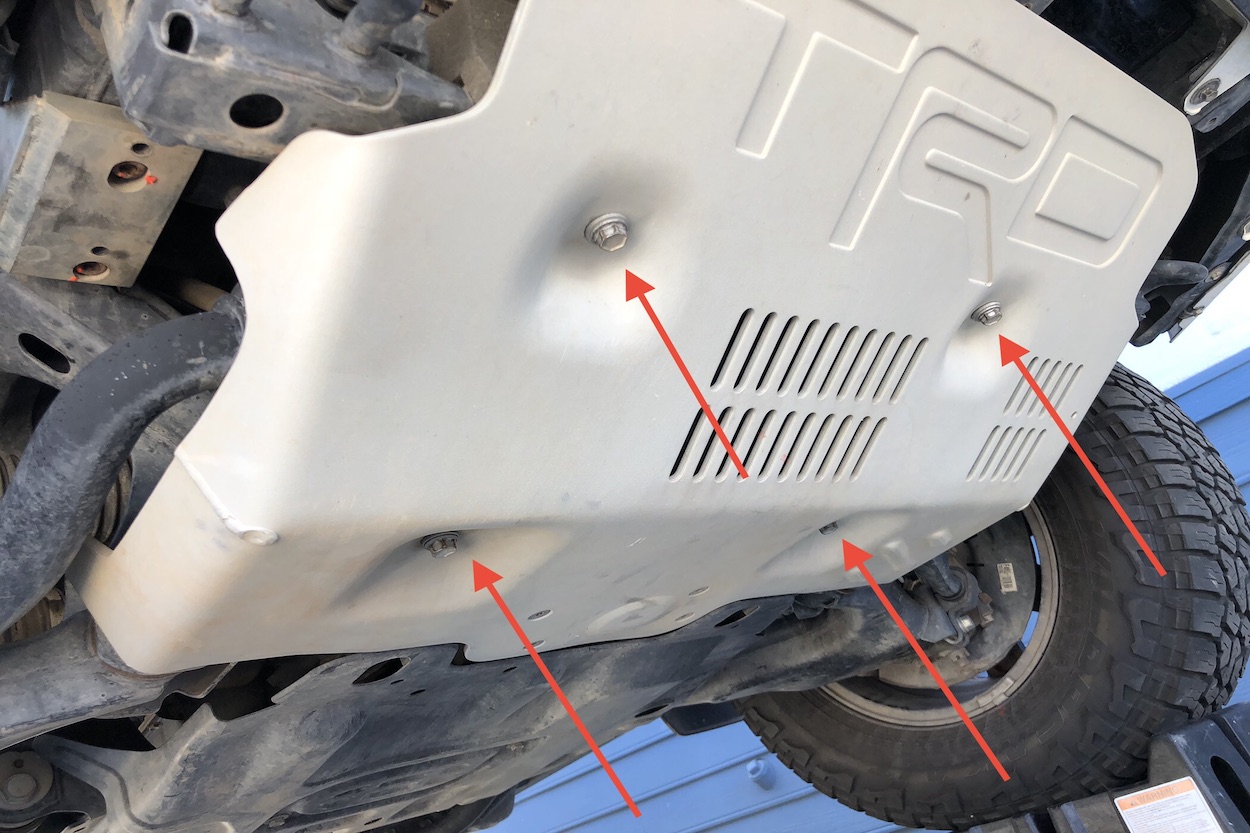 This part is optional, but if you don’t have a lift, using a drive-up ramp will help with providing more room to work with underneath the vehicle.

I have a TRD Pro skid plate modified for KDSS, so this part might be different for most of you since my radiator support braces have already been removed. If you still have the support braces, those will need to come off.

Next, use a 14mm socket to remove the four bolts holding the skid plate in place and also the radiator support braces. You’ll keep two of the OEM bolts which will be reused to attach the front of the C4 Skid Plate. 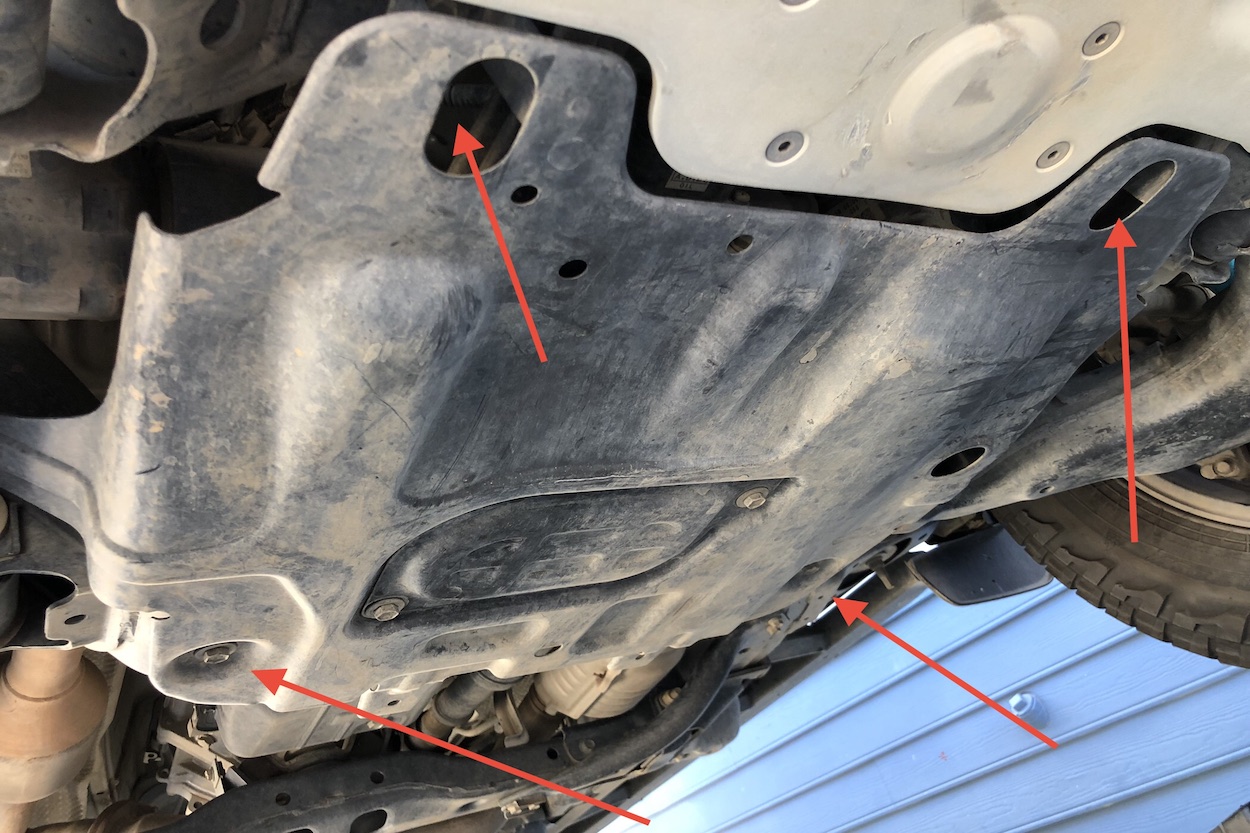 Locate the oil pan skid plate and the 4 bolts holding it in place and use a 12mm socket to remove all four bolts and skid plate. 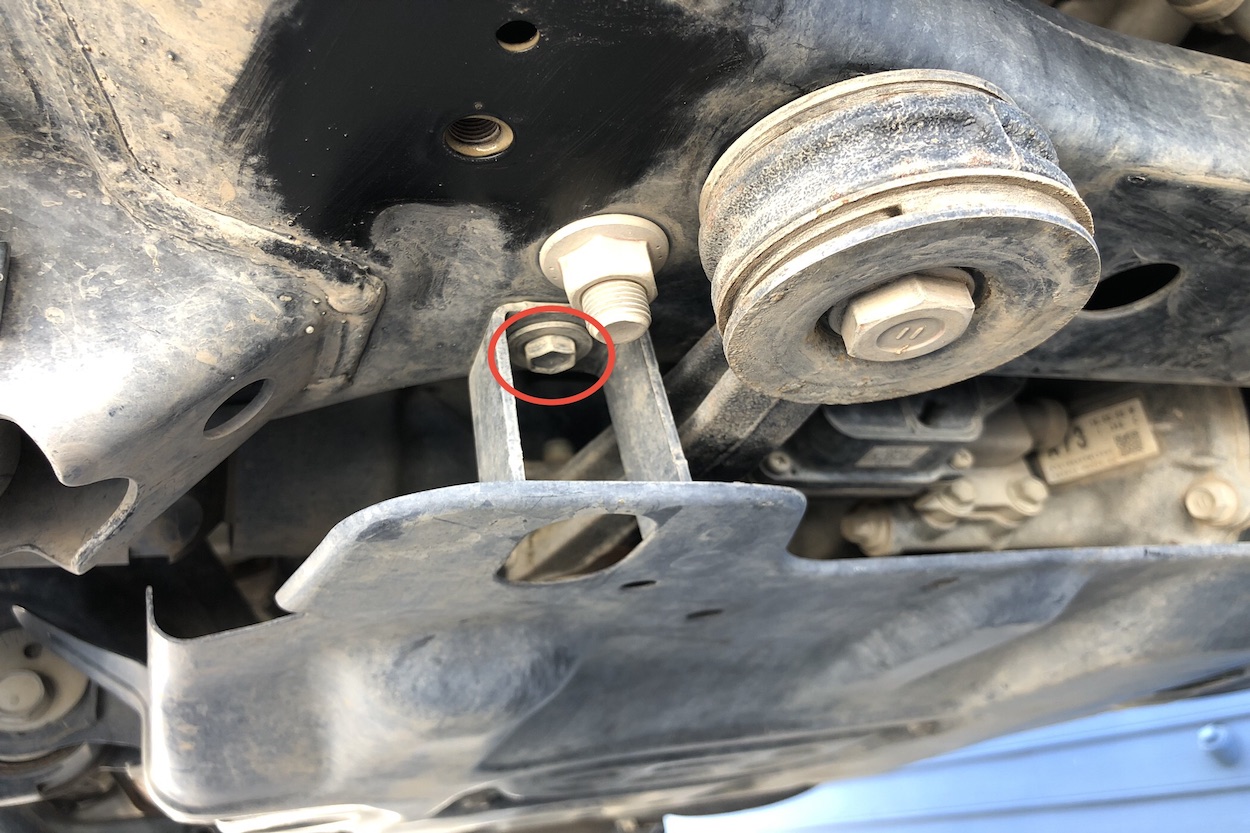 You’ll have to use the socket extension for the two recessed bolts. 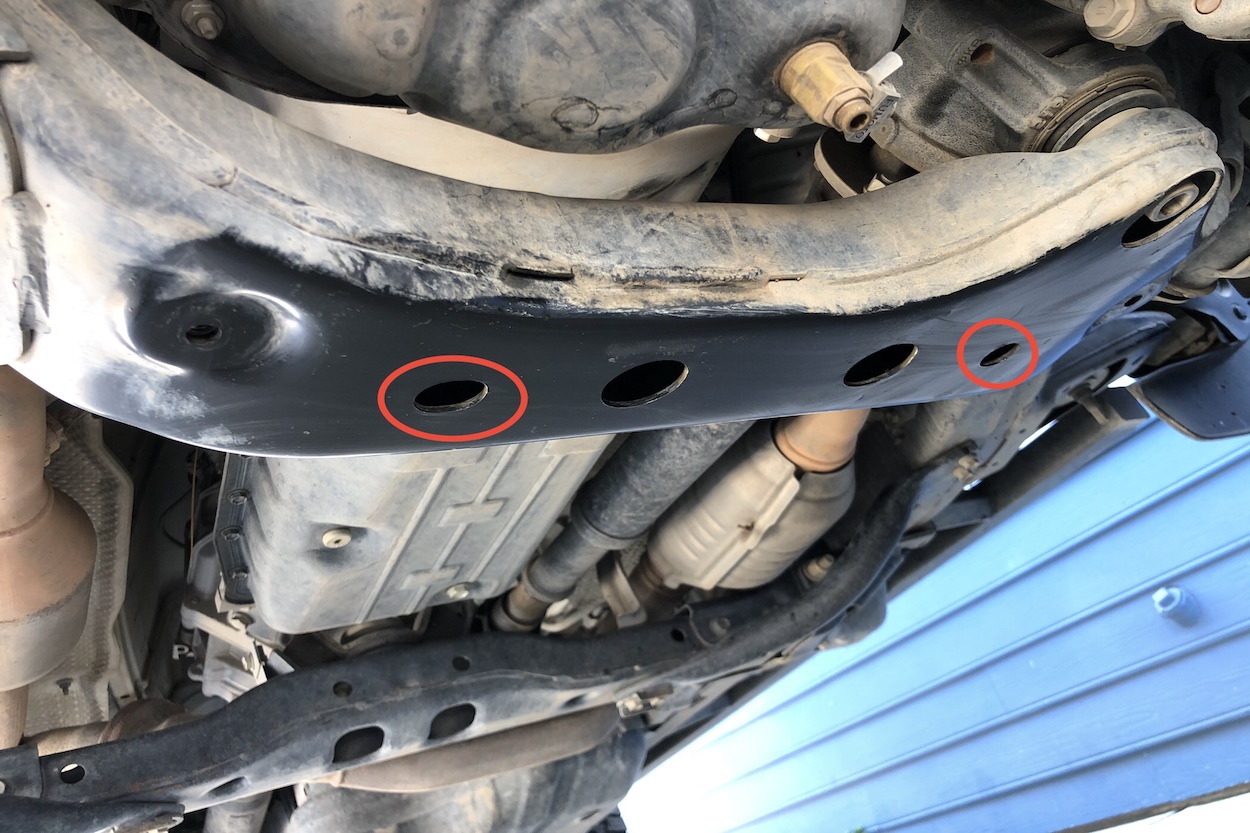 Clean the cross member behind the oil drain plug where the skid plate will mount, especially the area around the fastener holes. 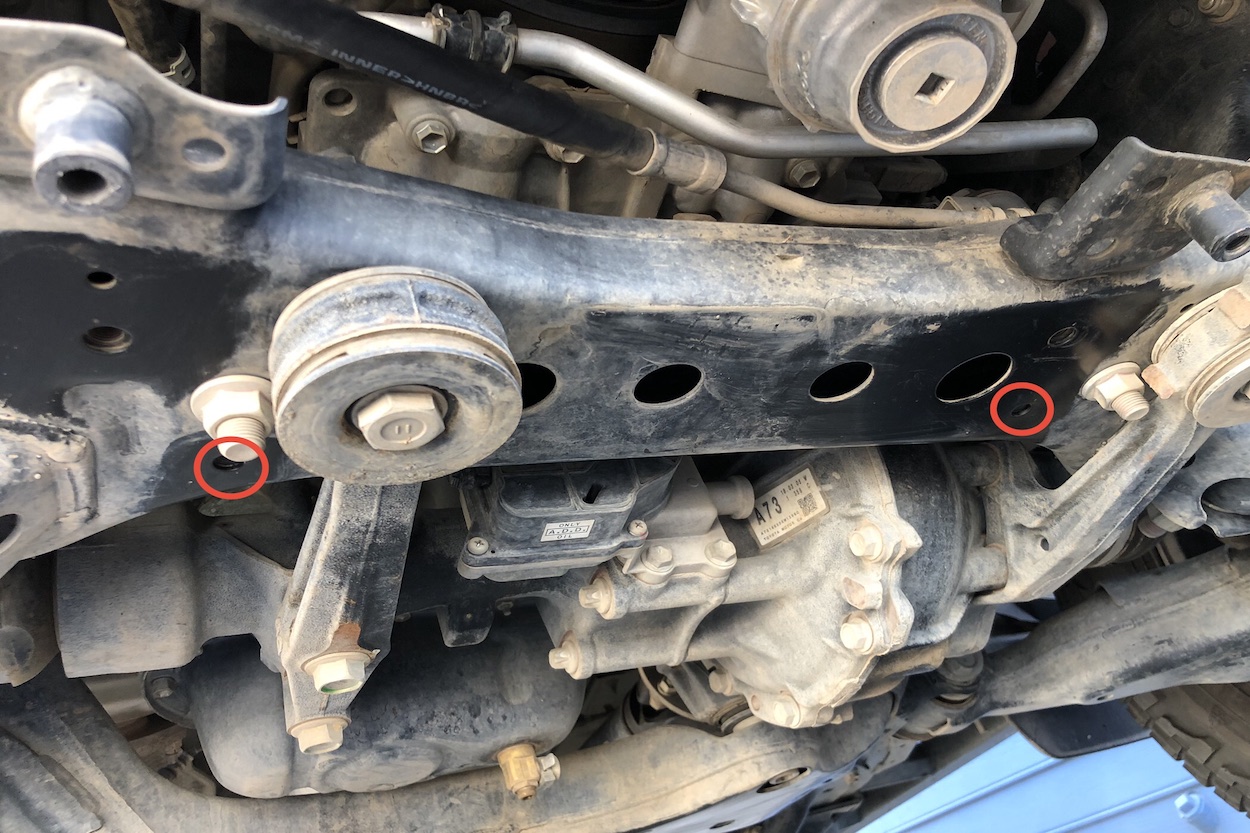 Next, clean the cross member behind the oil filter housing. The two fastener holes where the C4 skid plate will mount are right next to the flange nuts. 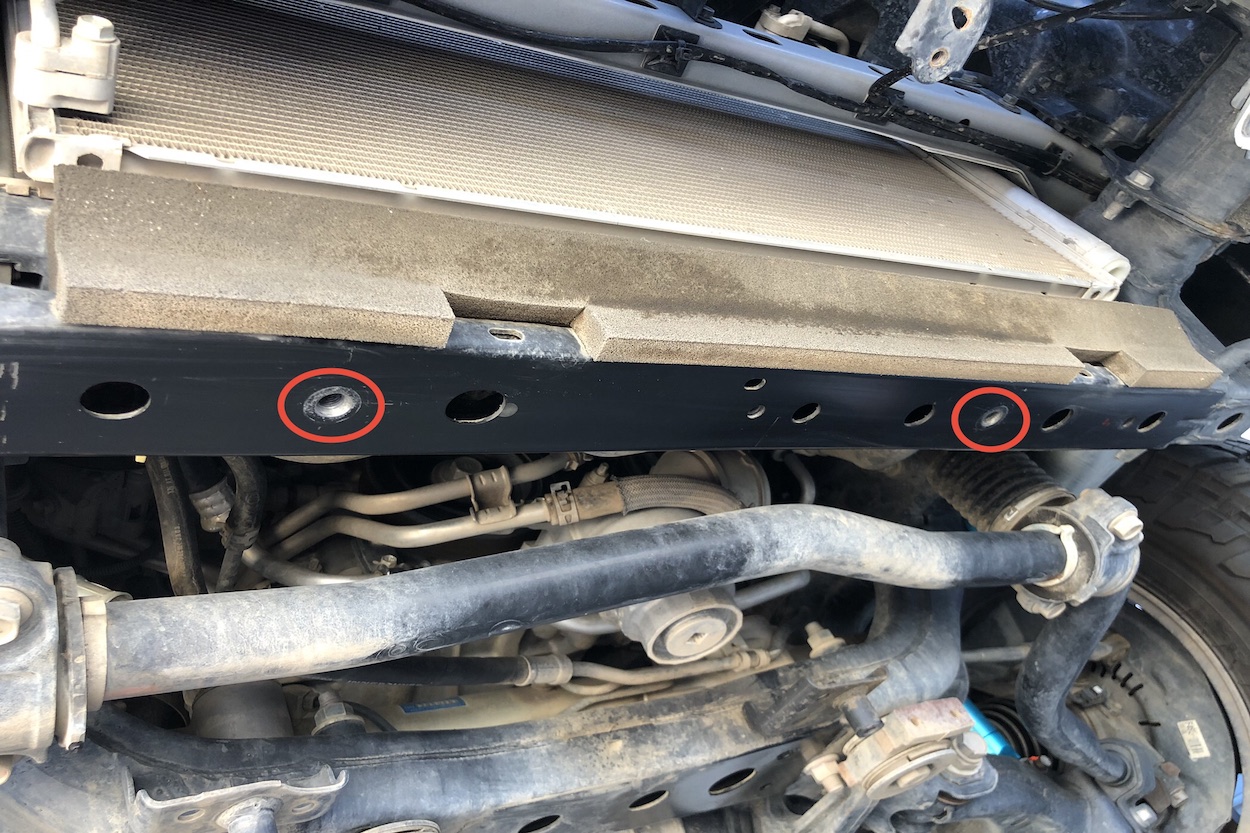 Finally, clean the radiator support cross member and reference the picture above for fastener holes.

Position the skid plate so that it is balanced on the jack pad and raise it to align the front holes with the fastener holes in the radiator support cross member. 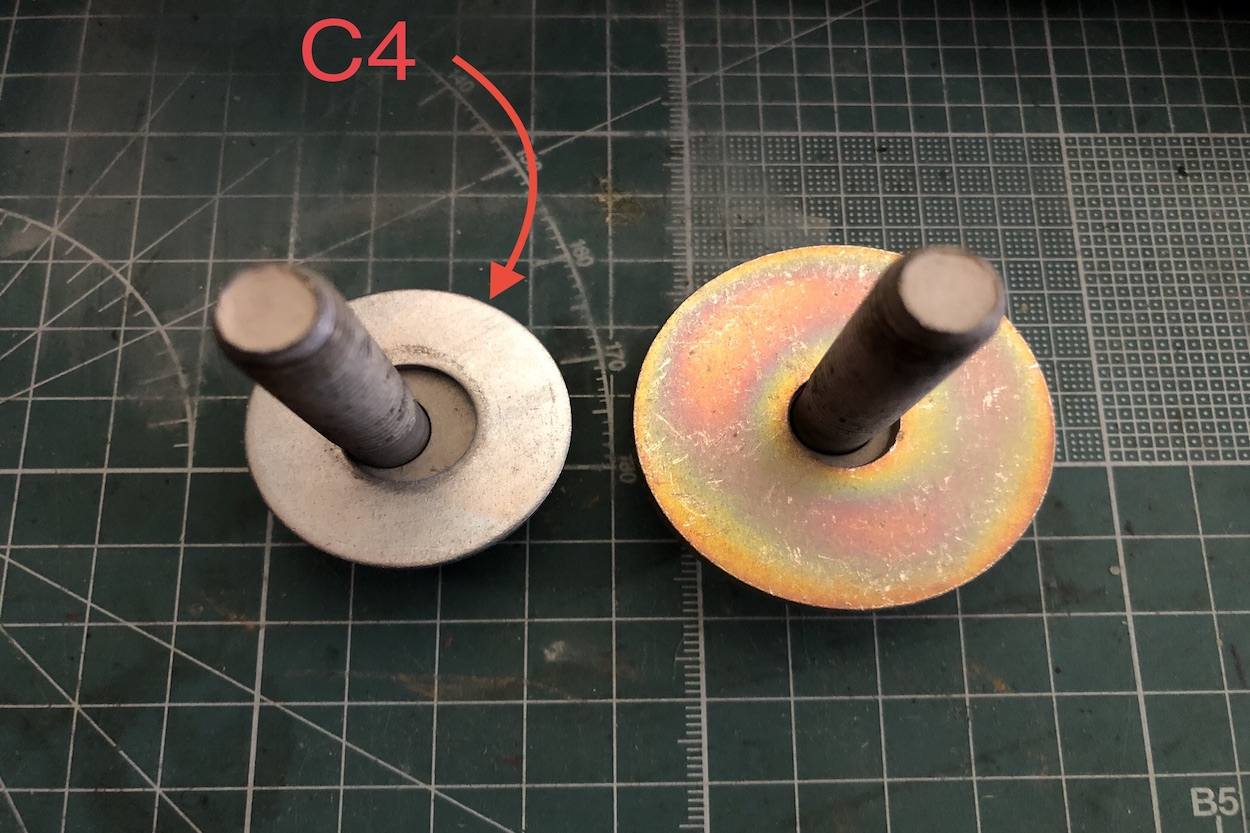 Using the factory M9 bolt and the supplied washer, loosely fasten the front of the skid plate to the radiator support brace.

I found that the supplied washer was a bit large for the factory M9 bolt so I ended up using some oversize washers I had laying around the garage. The ones I used are from McMaster-Carr and they are OD: 1.8″ ID: 0.46″ Thk: 0.11″.

Step 5. Install Carriage Bolt, Washer, and Plate Thru the Crossmember 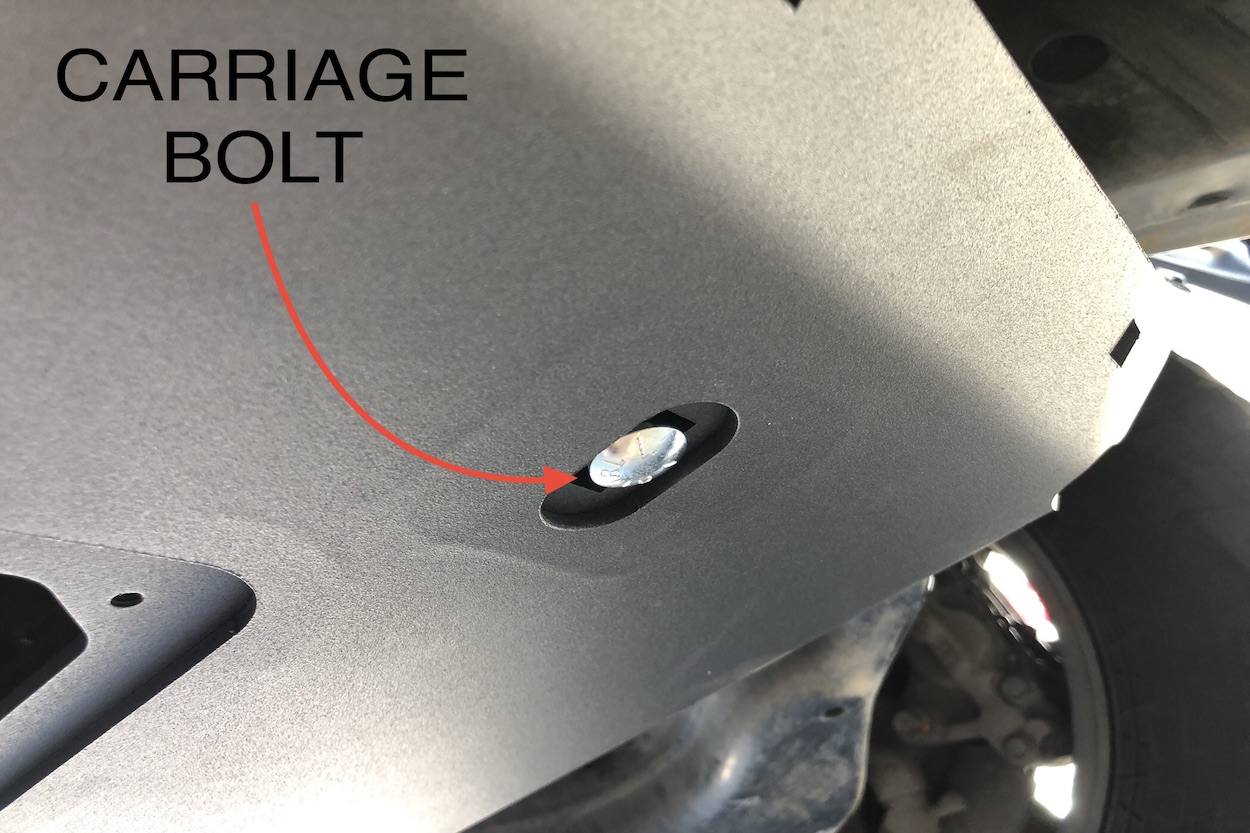 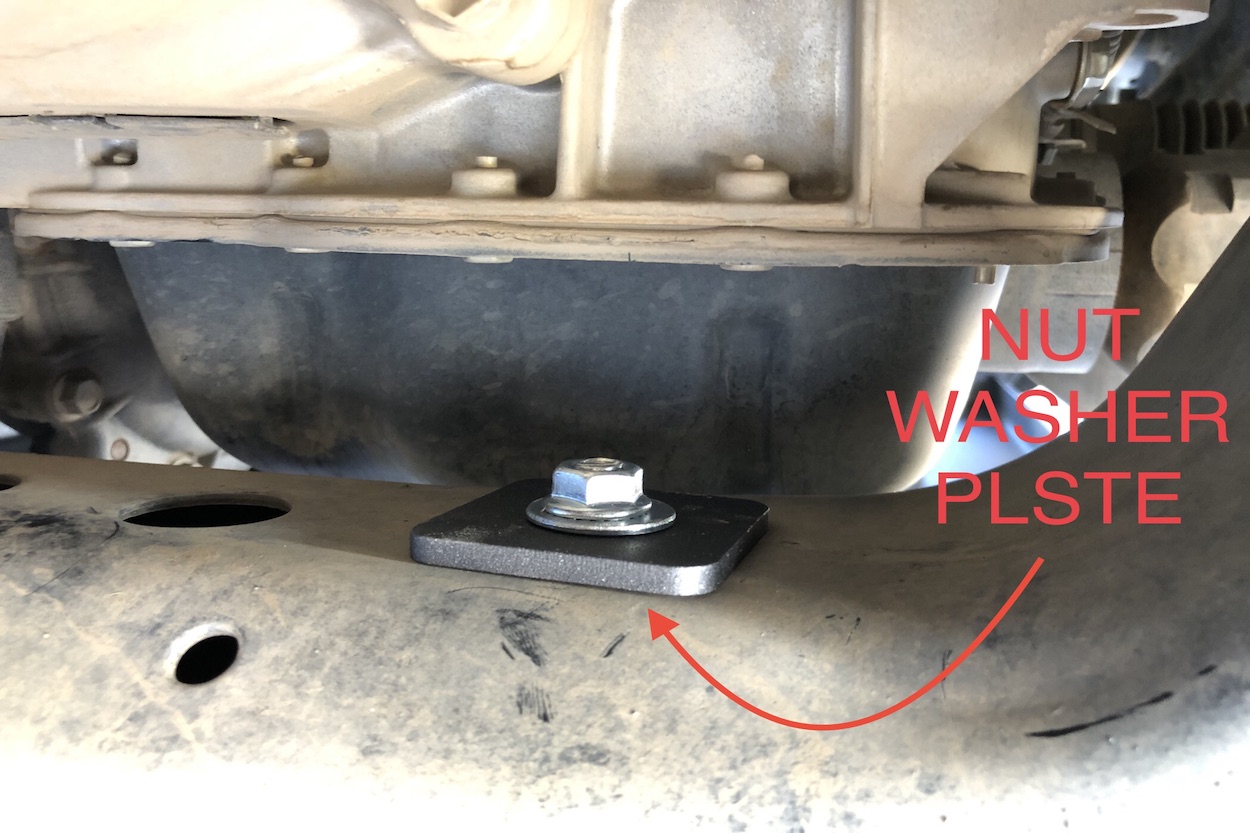 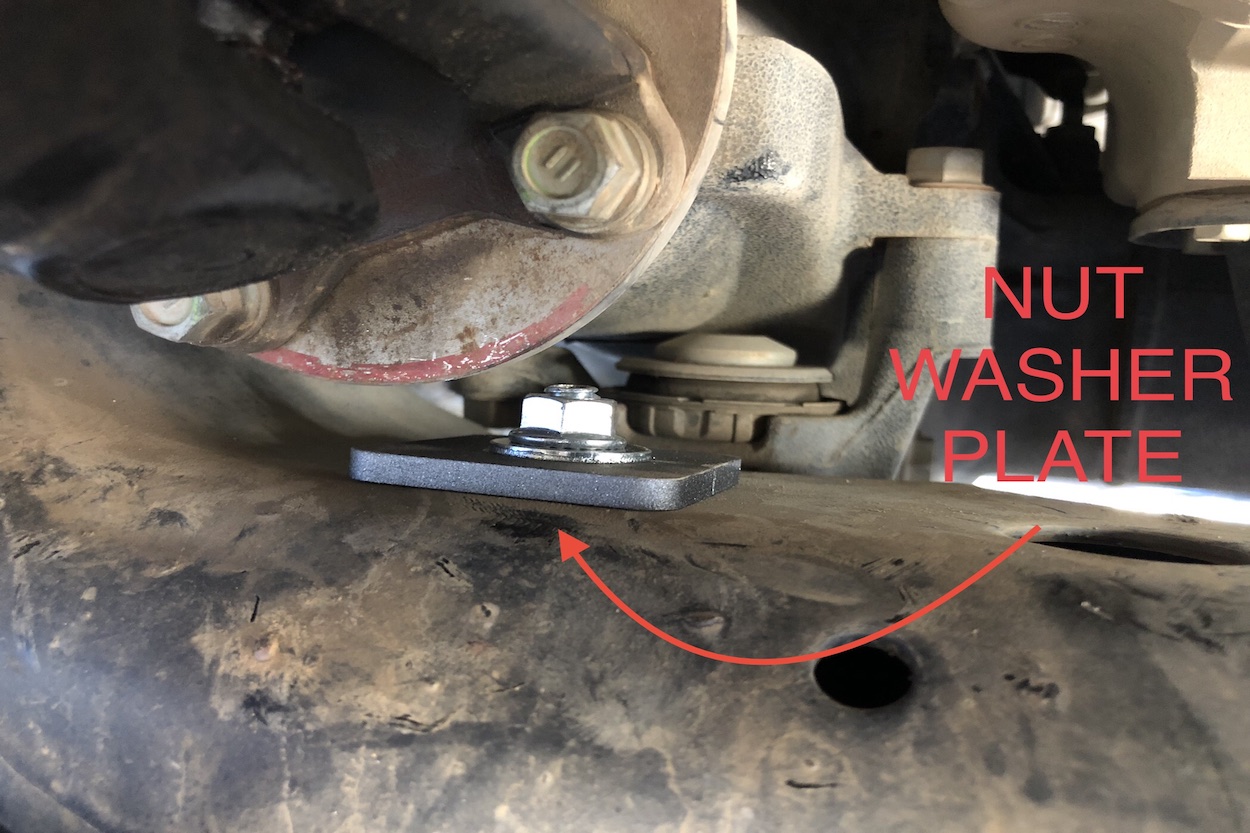 Repeat the same for the driver side. Keep in mind that the driver’s side has much less clearance than the passenger’s side. I find that this nut requires a combination of a crow’s foot to torque properly.

Step 6. Install the M8 Bolts to the Crossmember and Tighten All Hardware 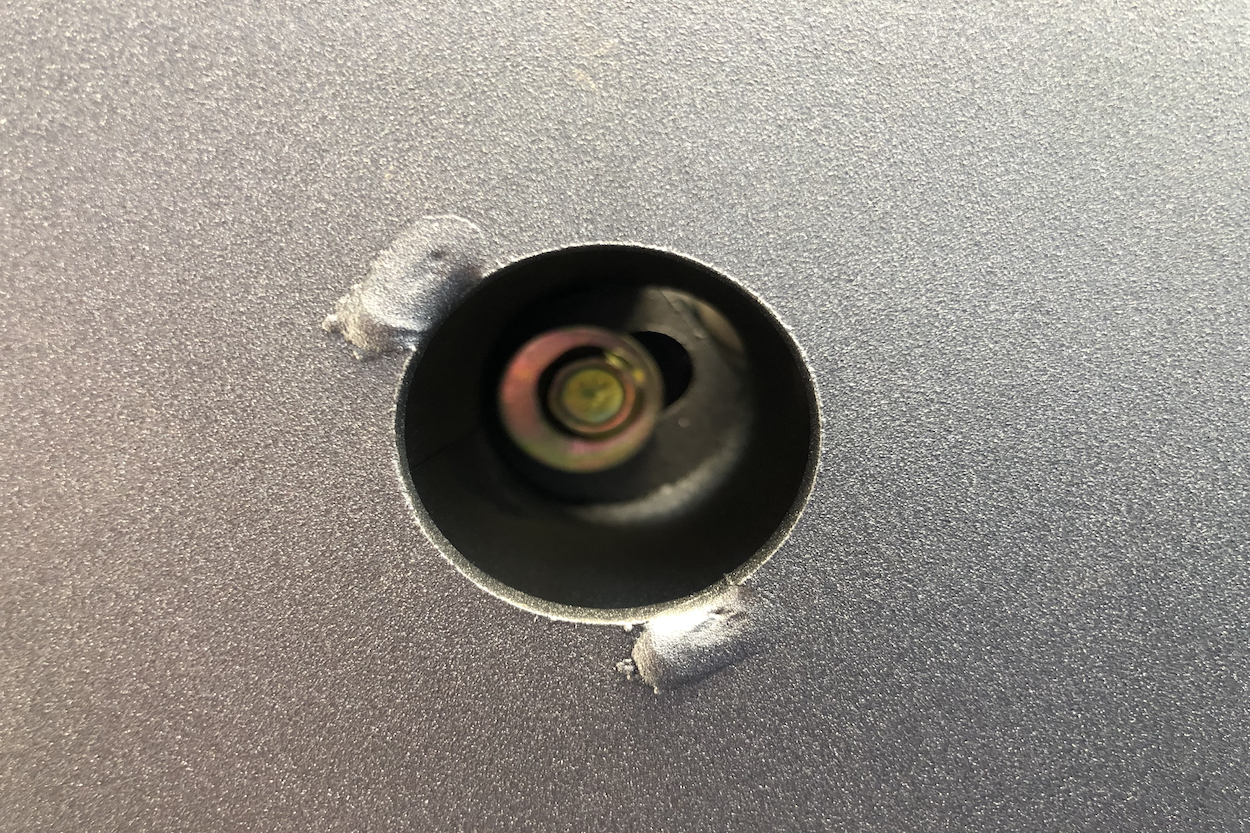 Use a 13mm socket and extension loosely install the two M8 Bolts next to the oil drain hatch opening. 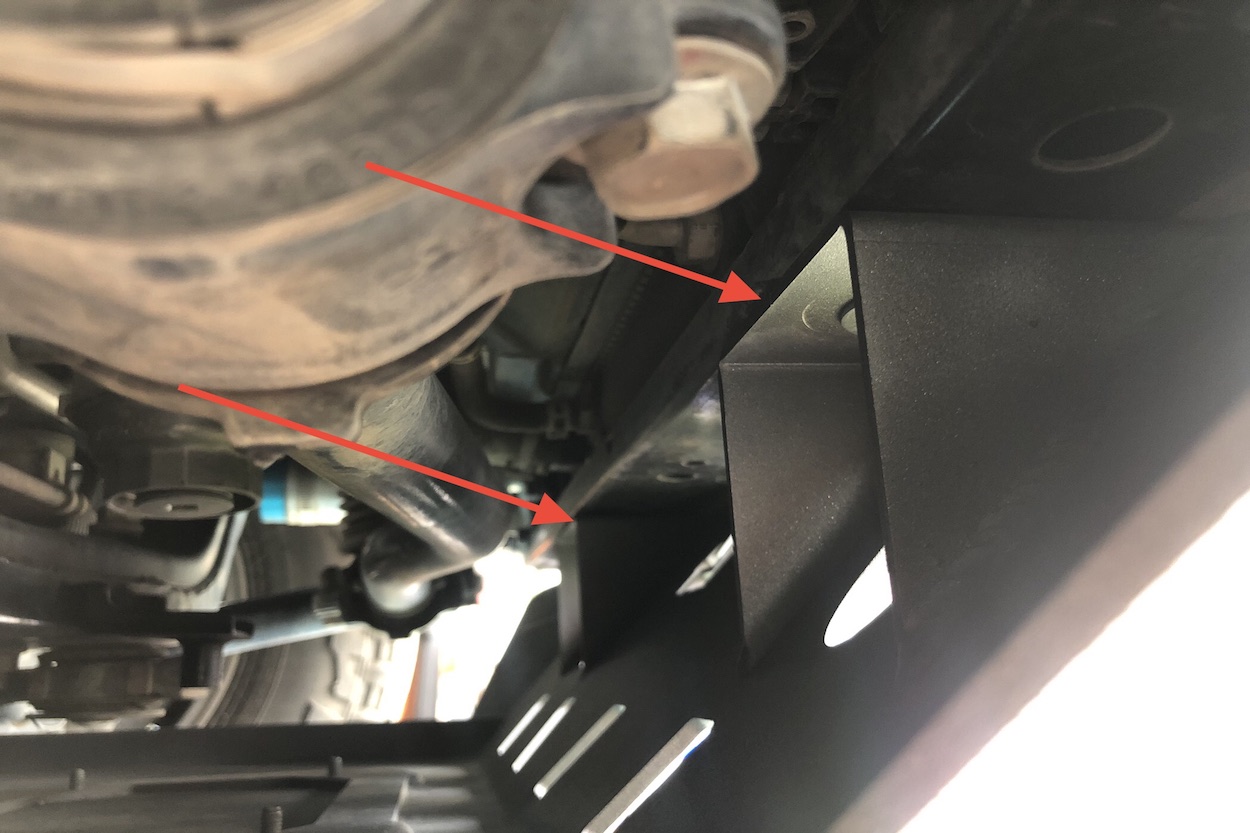 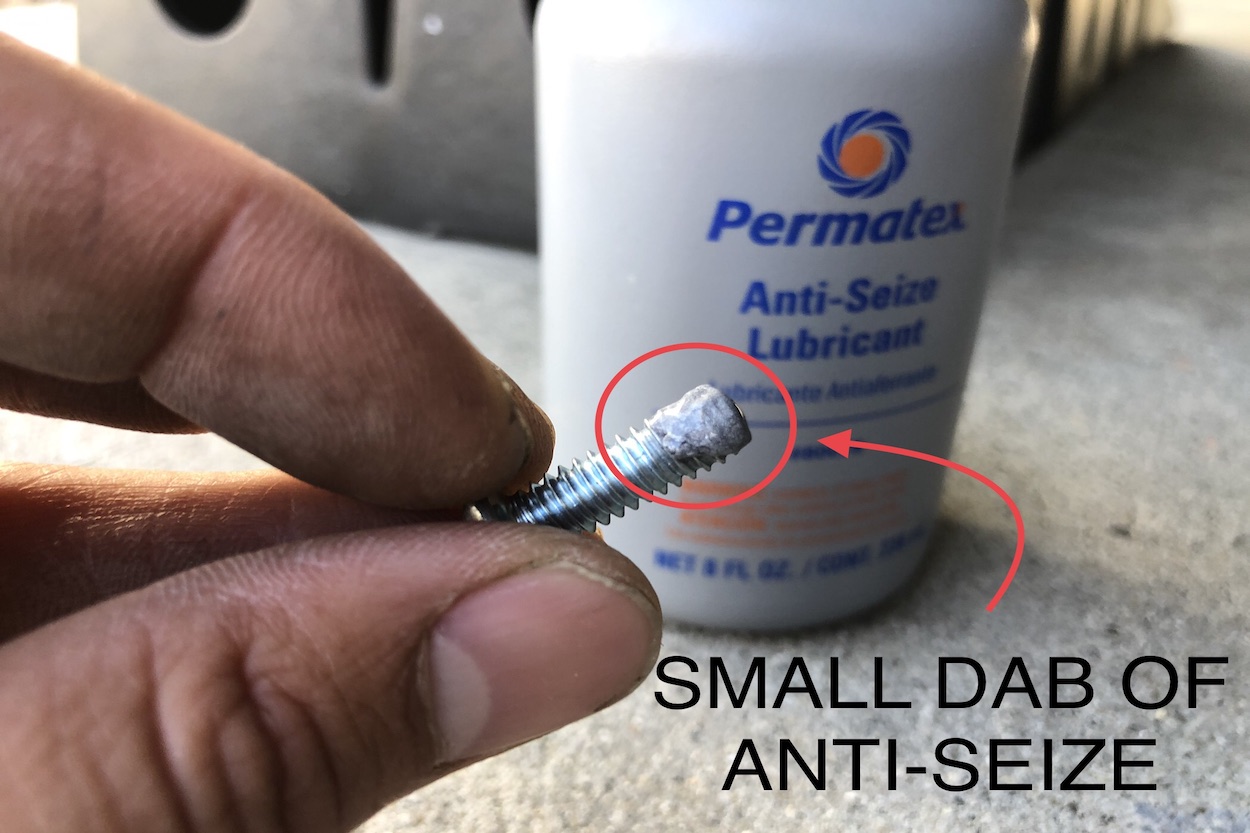 Since the access hatches will need to be removed periodically during oil changes I install all 8 screws with a small dab of anti-seize. 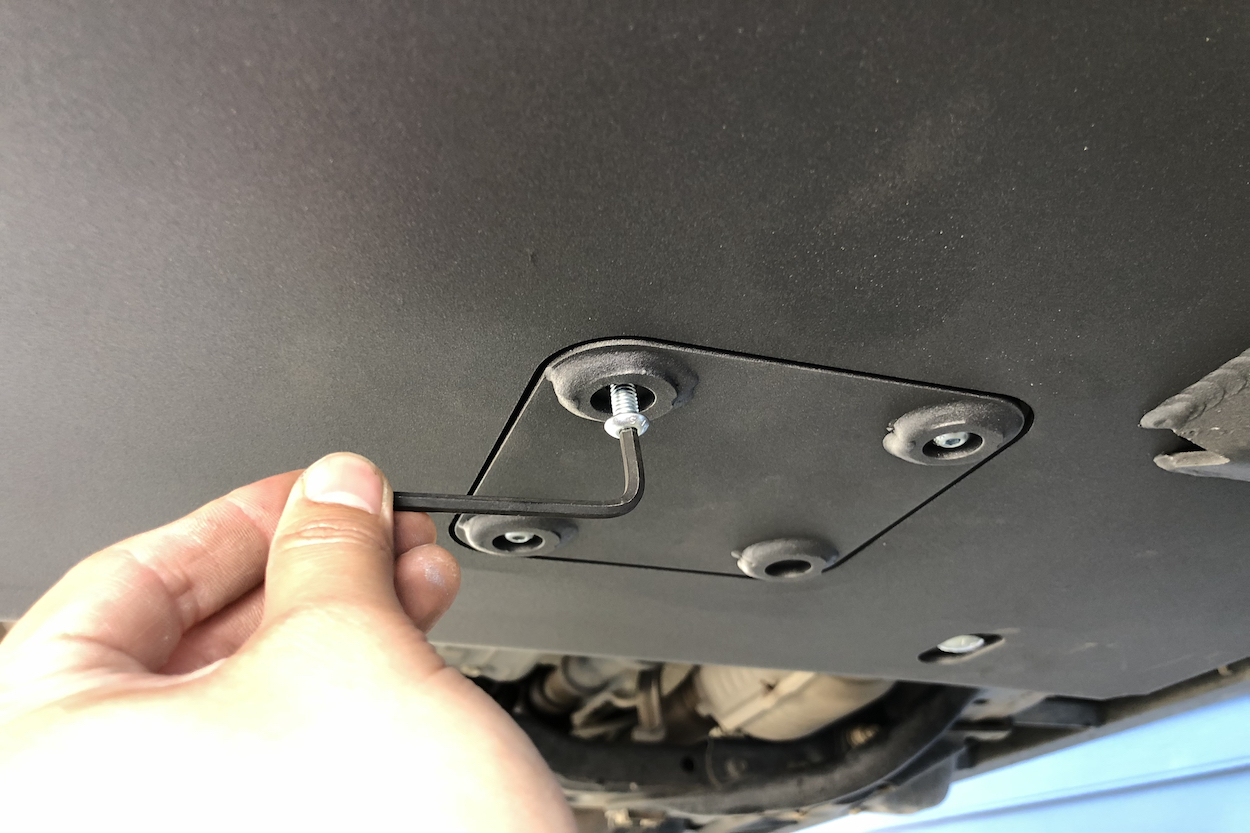 Use a 4mm hex key to hand tighten the screws and hatches to the skid plate,

One thing I noticed with the C4 skid plate installed is that there is a big opening between the bumper and skid plate. To me, this leaves the radiator exposed from the bottom. The chances of something bouncing up from the road and hitting the radiator are probably slim but it is not zero. 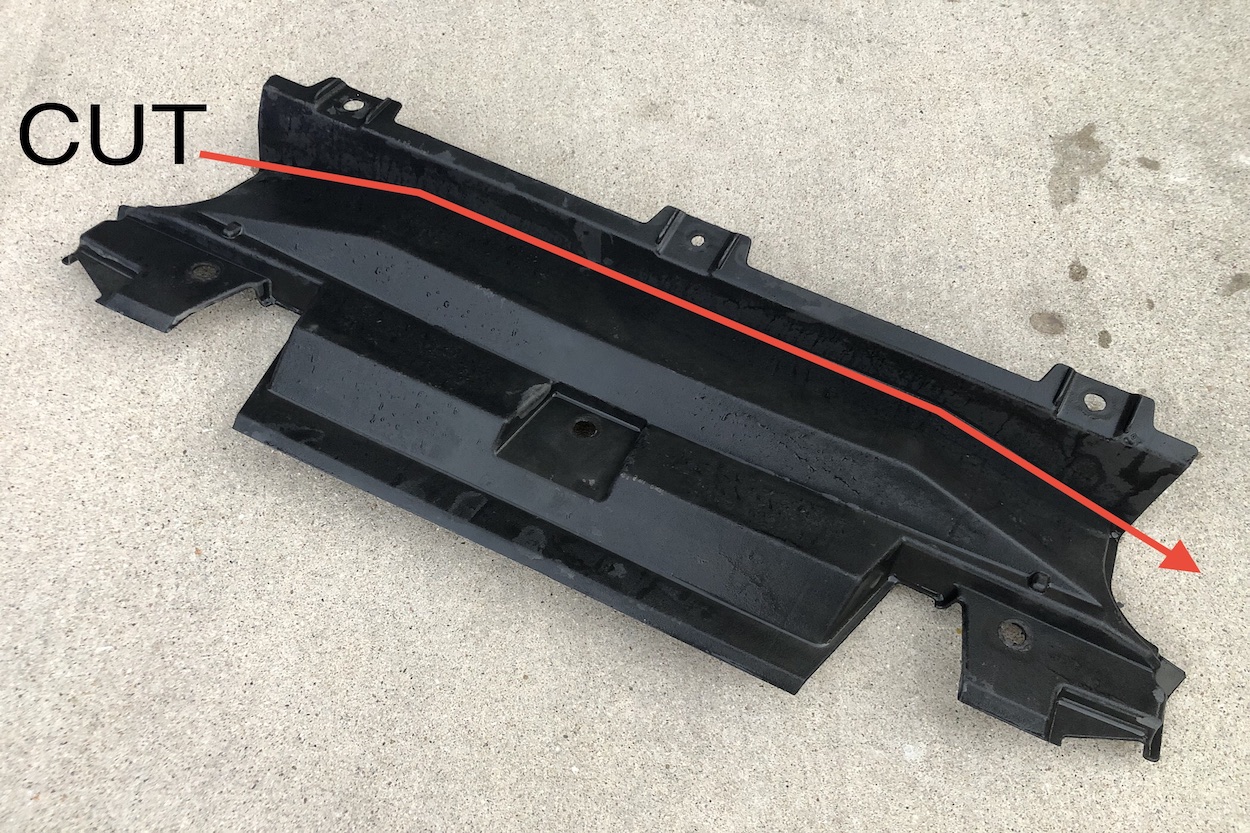 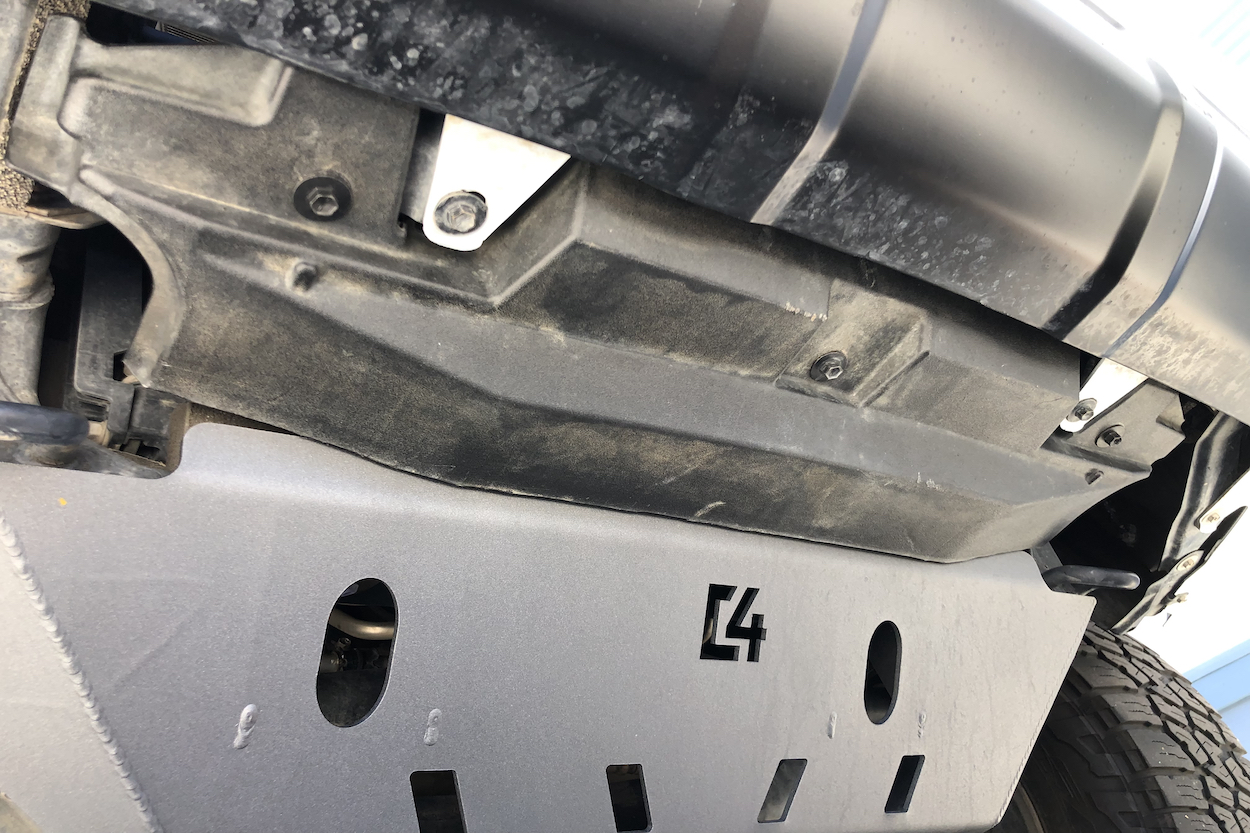 With some trimming, the air deflector now fits perfectly between the C4 Skid Plate and Bumper. 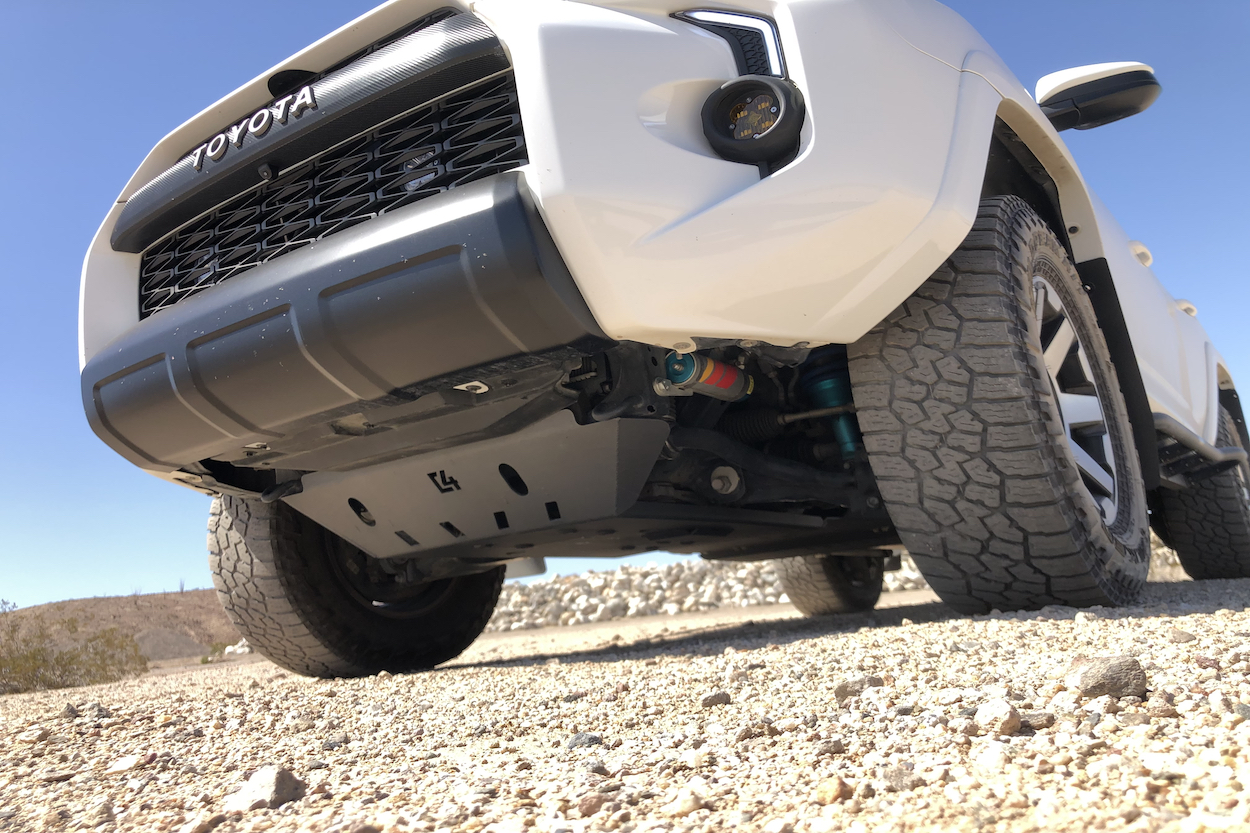 Overall the installation went pretty smoothly. The only two issues I had were with the supplied washer for the OEM bolt which I felt the ID was a bit oversized and the driver side flange nut being a PITA to torque.

Hey guys, my name is Jensen from Southern California! I like working on anything mechanical and exploring off pavement.

Considering this skid as well and trying to gauge actual weight gained. You’re guessing you’ve removed 35 lbs. so totally weight gained is approx. 20 or so lbs.? Or guessing total weight gained ~ 35 lbs.? Either way seems like a good trade off for going steel rather than alum.

Did you also weigh what you peeled off the car?

That would’ve been smart to do! Unfortunately I did not but if I were to guess it was probably ~35 lbs