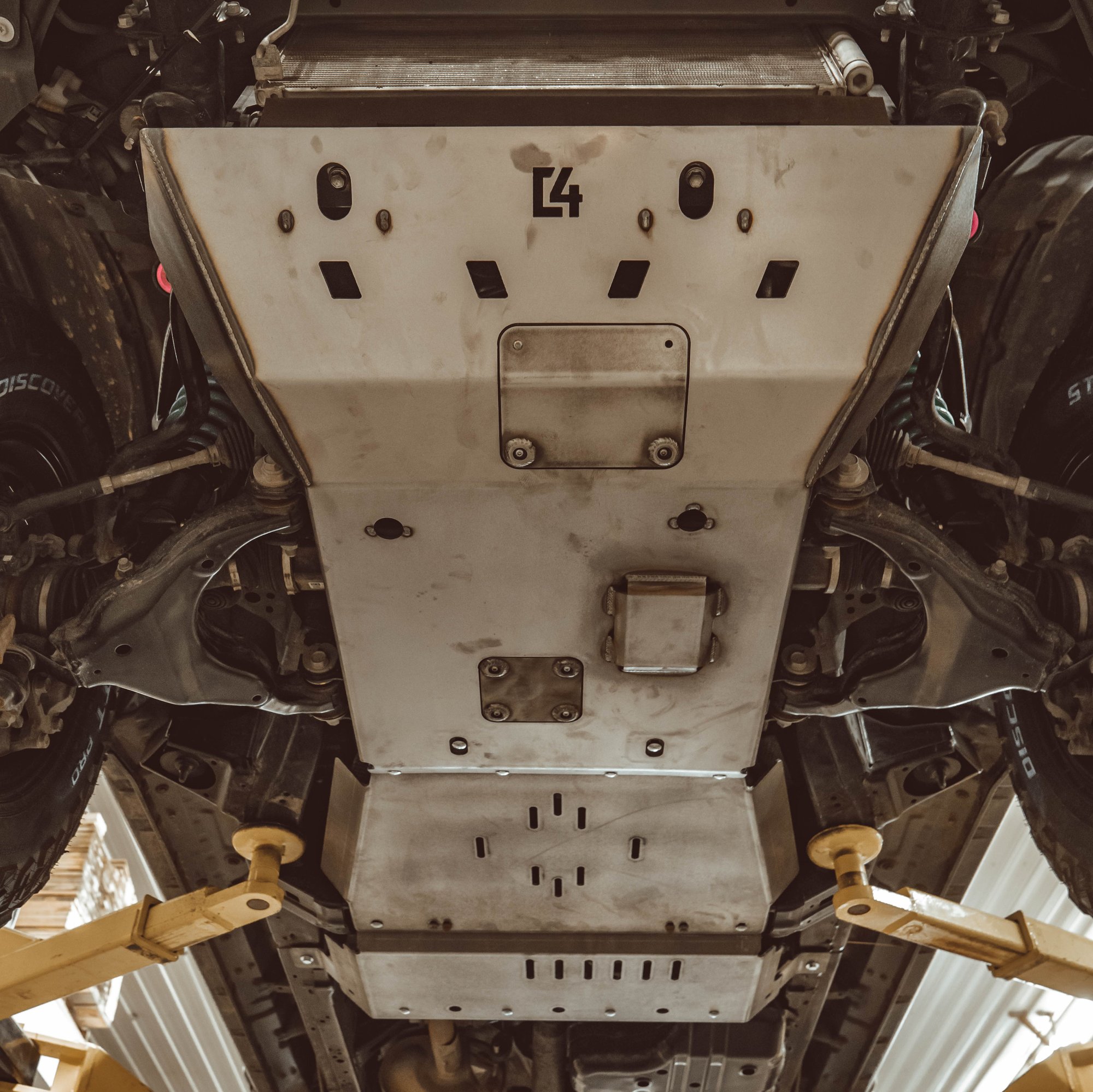 When it comes to aftermarket armor for my 4Runner, there’s one name that I’ve trusted for almost 4 years: C4 Fabrication. I’ve been running a set of C4 Fabrication rock sliders since 2017 and have beat the living daylights out of them. They have seen their fair share of rocks and have done quite well.

After I bought their sliders, I bought one of their low-profile bumpers, also referred to as the Lo Pro Winch Bumper. Adding their low profile bumper to my 4Runner was a huge upgrade. It allows me to mount a winch, additional forward-facing lighting along with adding two frame-mounted recovery points.

After running a low-profile bumper for a couple of years, I decided to take the next step and move forward with two additional full-width front bumpers from C4 Fabrication: the hybrid series which is going on our MGM 4Runner Jade and the Overland Series which should be going on our white 4Runner.

I think it’s safe to say we know, trust and depend on C4 Fabrication steel. I have researched many other armor companies throughout the years, however, none of them have really stood out as a Toyota centric brand quite as C4 has. One of the things I really like about C4 is they focus on Toyota. They produce extremely high-quality armor for Toyota and Lexus trucks, being the 4Runner, Tacoma, Tundra and GX models.

They have released many different products over the years, and FINALLY, they’ve finished the design of their steel skid plates. I am beyond hyped for these!! I have been wondering when they were going to make a full set of skids.

Yeah, you guessed it, we are going to run a set and will have an install/review coming soon.

Without any more introduction, let’s take a look at these new steel skid plates. 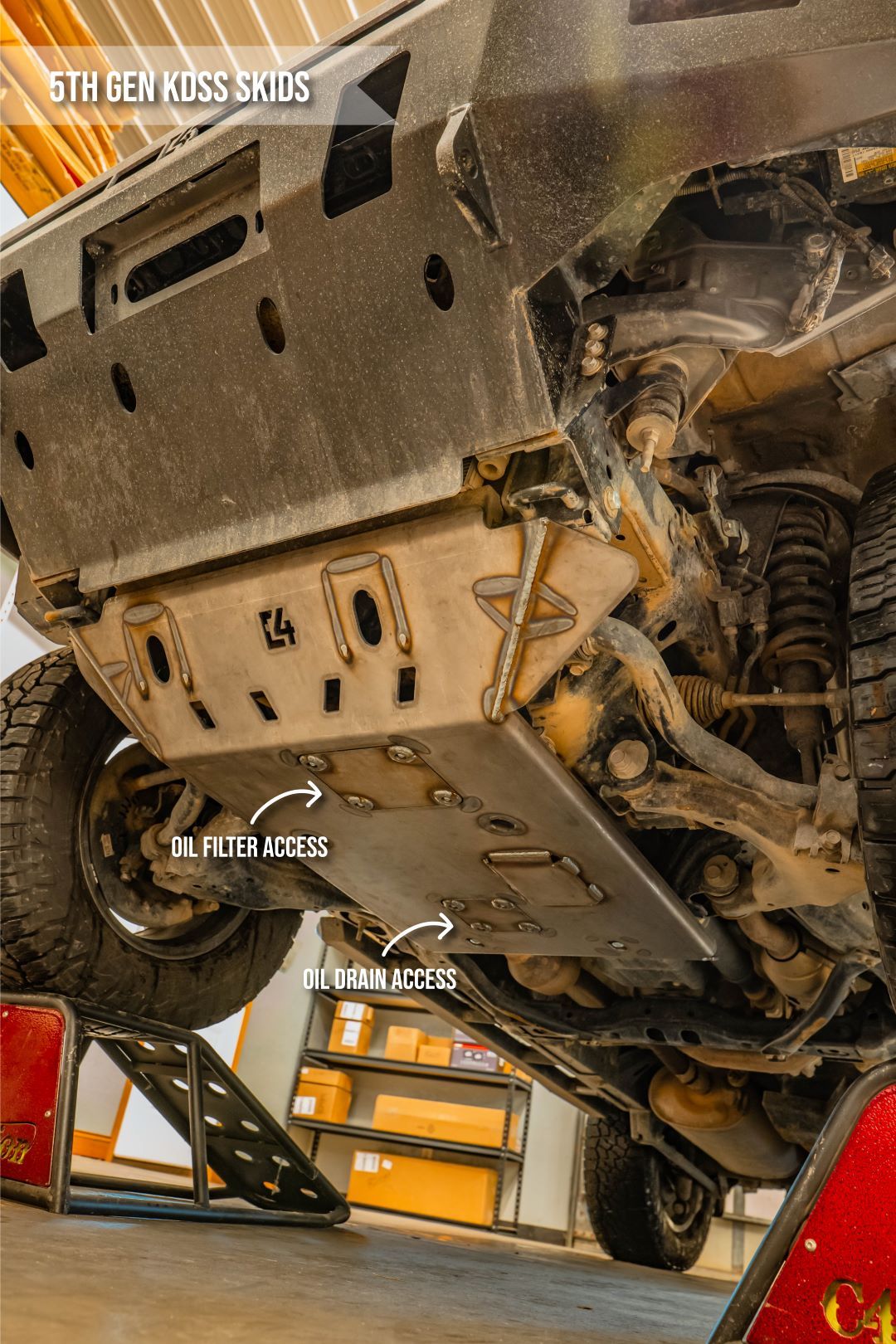 At first glance, the skid plate appears to be incredibly well-designed in order to protect every part intended for your undercarriage: the engine, transmission and transfer case. The engine skid plate (front skid plate) provides coverage on the outside for both KDSS and non-KDSS versions; however, the KDSS skid plate will sit lower in order for the sway bar to clear.

The same design style continues into the transmission and transfer case skid plates. Both of these skid plates feature side protection, multiple drain holes and C4 says they have a “unique bolt-in crossmember that helps maximize strength and protection for the transfer case”. We will get more into this once we install them. I think all the drain holes throughout the rear skid plates are an added bonus to the design as well.

At the end of the day, it’s C4 Fabrication. These things are going to be solid.

The skids are made from 3/16″ CNC cut P&O steel which is going to provide the most protection when hitting rocks on the trail. If you are looking for an aluminum skid plate, look at other options on the market as C4 does not offer aluminum fabricated skid plates at this time. We are currently running a full set of RCI aluminum skid plates, however, we will be upgrading to these steel plates for increased strength and durability. 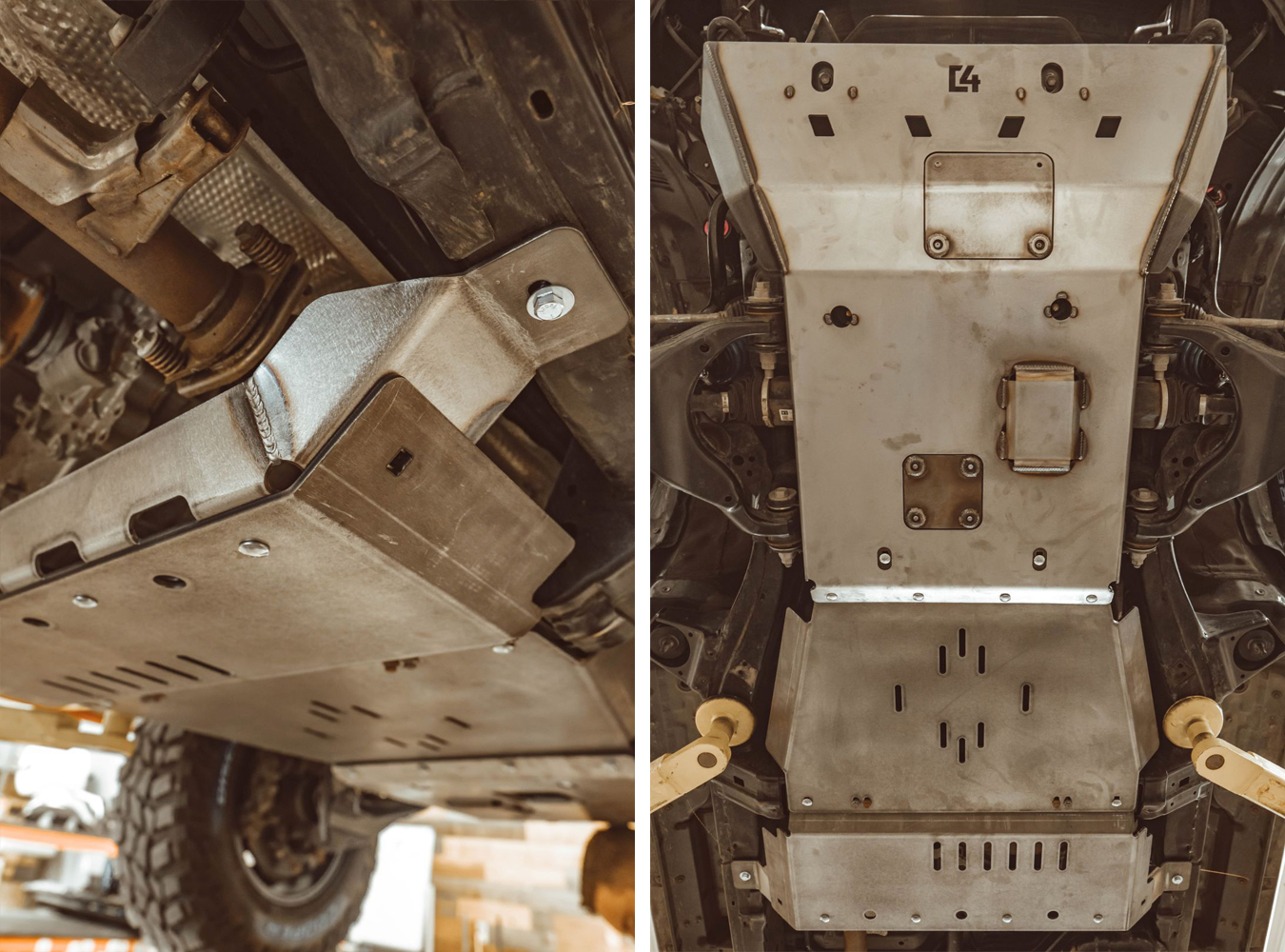 Straight from the C4 Fabrication website, see below for what they list out as their specs, features and benefits:

One of the downsides of C4 Fabrication is that they do not offer powder coating services in house. They ship all their armor bare steel which means you need to either take it to a powder coater or paint the skid plates yourself. We have many guides on the website that show you how to prepare bare steel armor so it’s not a huge deal-breaker, nor is it difficult, it’s just something to consider when buying skids.

Regardless, we are still moving forward with a set of these skid plates and super pumped to be running a full set, possibly for both of our for 4Runners. 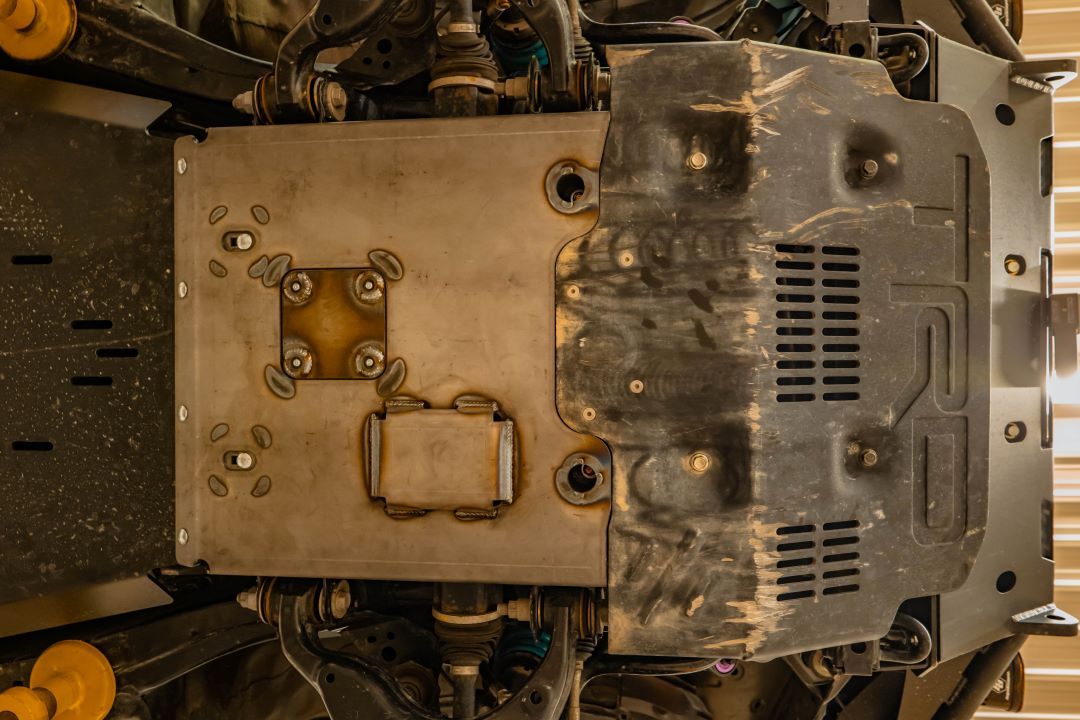 With the release of their new full skid package, C4 also designed a new TRD Pro skid plate compatible filler plate. This essentially extends your TRD front skid plate and covers the gap in between your engine and transmission. If you want to keep your TRD Pro skid plate and extend the coverage back to the transmission, the new TRD Pro Integration Skid from C4 allows you to do just that. As of now, this is the only product of its kind on the market. 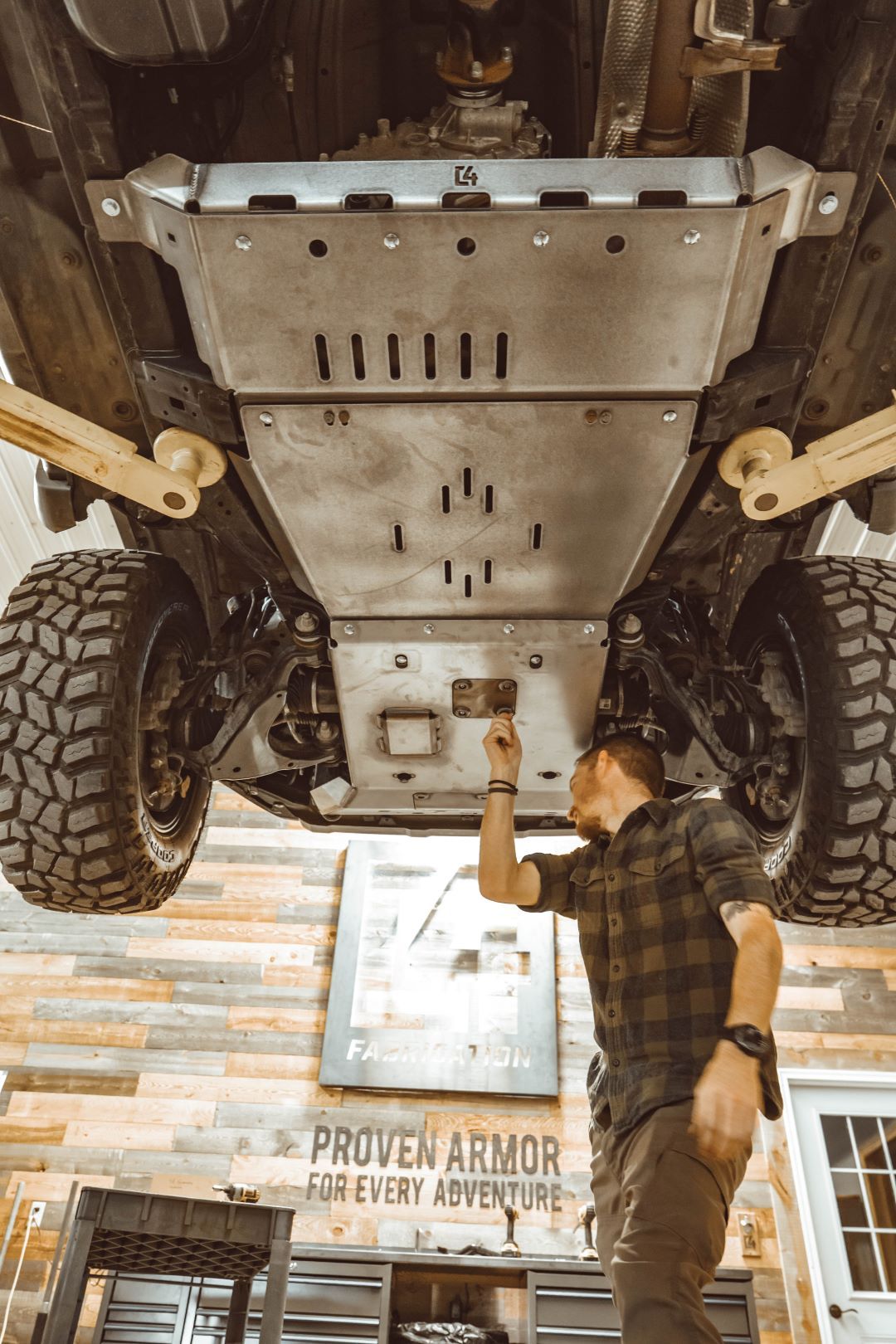 C4 Fabrication offers both KDSS and Non-KDSS options for the 4Runner. There isn’t going to be too much of a difference in terms of weight, however, the design does vary a little bit in order for the hydraulic sway bars to clear.

We have yet to get them installed, so time will tell, but after running many of their other steel products, I feel confident in the new design of their skid plates.

The added C4 logo and the drain holes on the T-case crossmember support is a nice touch.