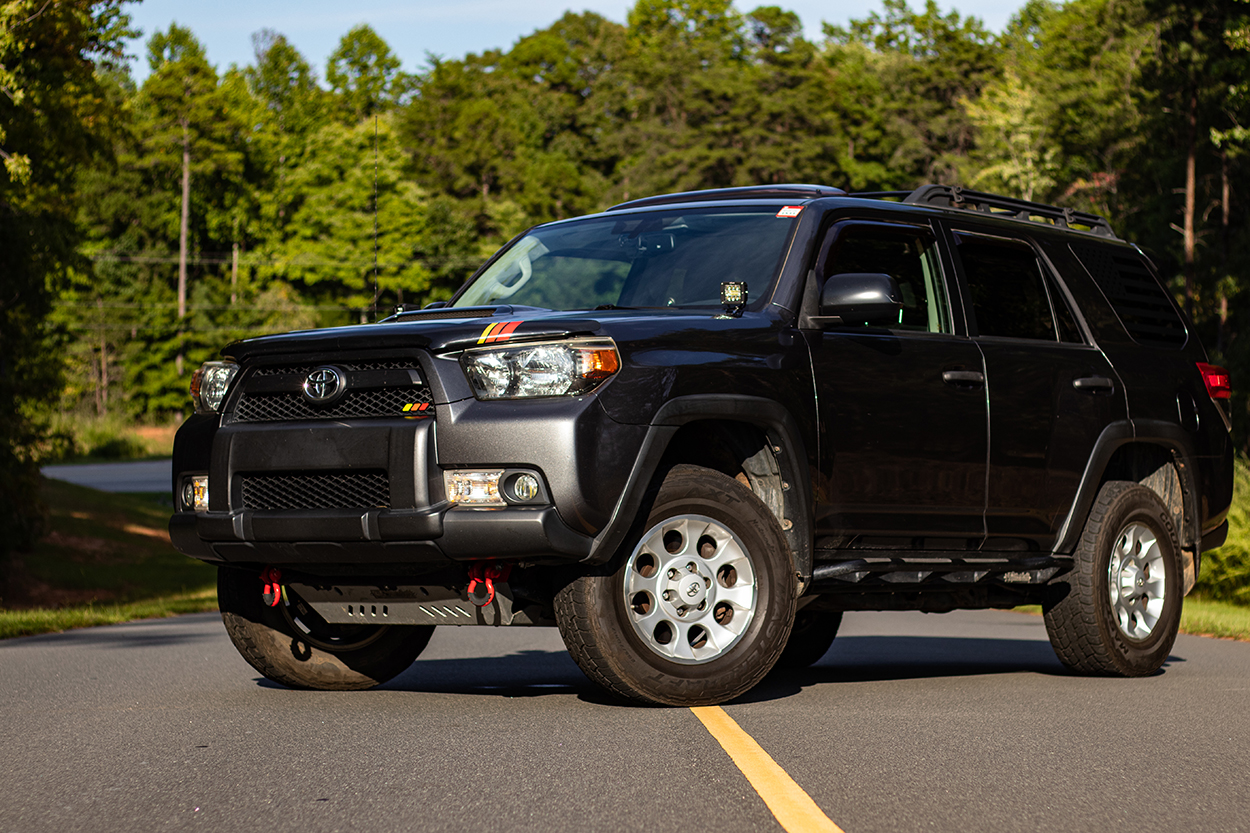 I drive a 2011 4Runner Trail Edition that I purchased used in July of 2018 with only 58,000 miles on it. I have 105,000 on it now and it has been a perfect vehicle without any problems. I already told my story in a previous article covering the installation and review of the 4xInnovations full skidplate package.

Today, I want to tell you about another addition to my rig that I am very excited to introduce; the Coil SumoSprings™ from SuperSprings International. If you are not familiar with SuperSprings International, they produce a pretty extensive line of suspension components, such as bump stop replacements and other load carrying enhancement upgrades for many truck and SUV platforms.

Because of this, when I put a load in the back, whether it is camping gear or bags of mulch, I get anywhere from half an inch to an inch of sag in the back and it looks like a weak attempt at a “Carolina Squat” which is not a good look on a 4Runner. I was hoping that the Coil SumoSprings™ booster could give me a tiny bit more load capacity in the rear so that I could carry some mulch or go camping and still be level in the back.

What attracted me to the Coil SumoSprings™ was the price, ease of installation, and the possibility that I could get some of the benefits of heavier springs (more load capacity and a minor lift) without the expense or hassle of changing the springs.

How do you know what to order and what is included? 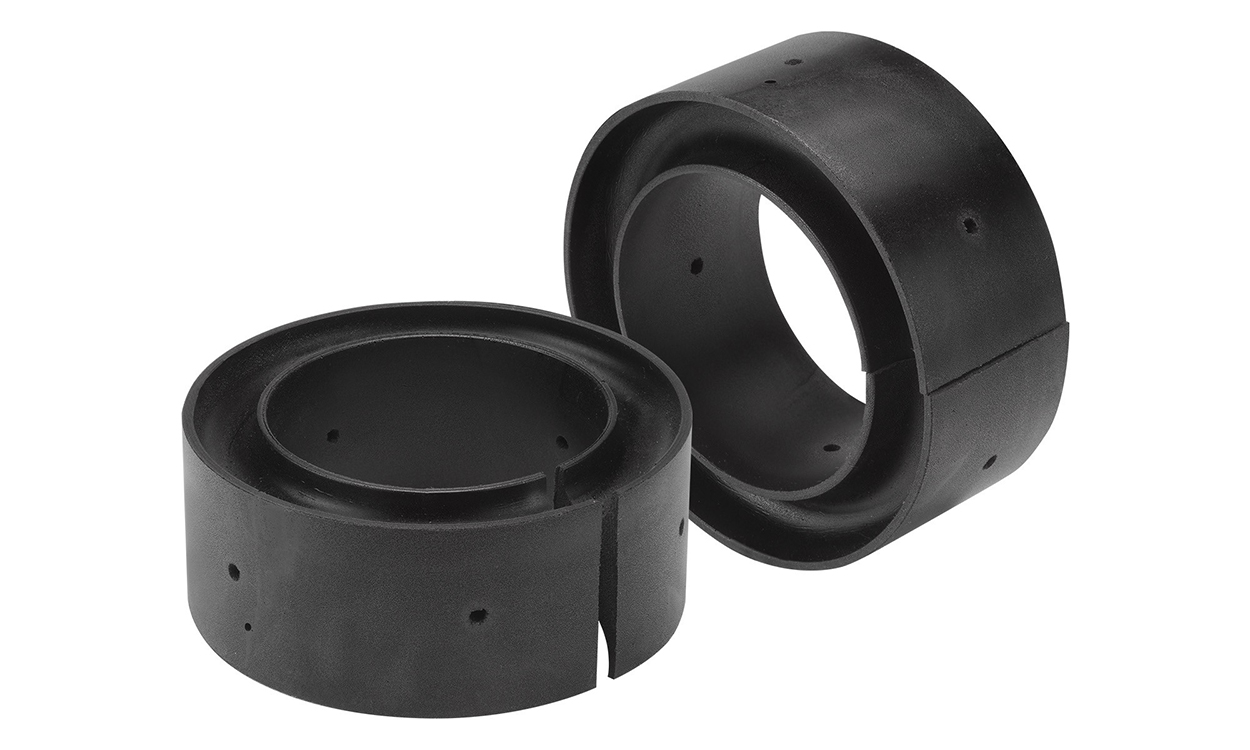 Coil Sumosprings™ are made of injection-molded micro-cellular urethane foam and are designed to act as a “helper” spring in your existing coils (they claim to increase the coil capacity by 15% to 30%).  To determine the size for your vehicle, the process starts with measuring the gap between your rear coils while at rest on a level surface.

Once I received the package from SumoSprings™, I was surprised to see how simple it was.  When the box arrived, it contained two Coil SumoSprings™ and two zip ties and an invoice, and that was it. 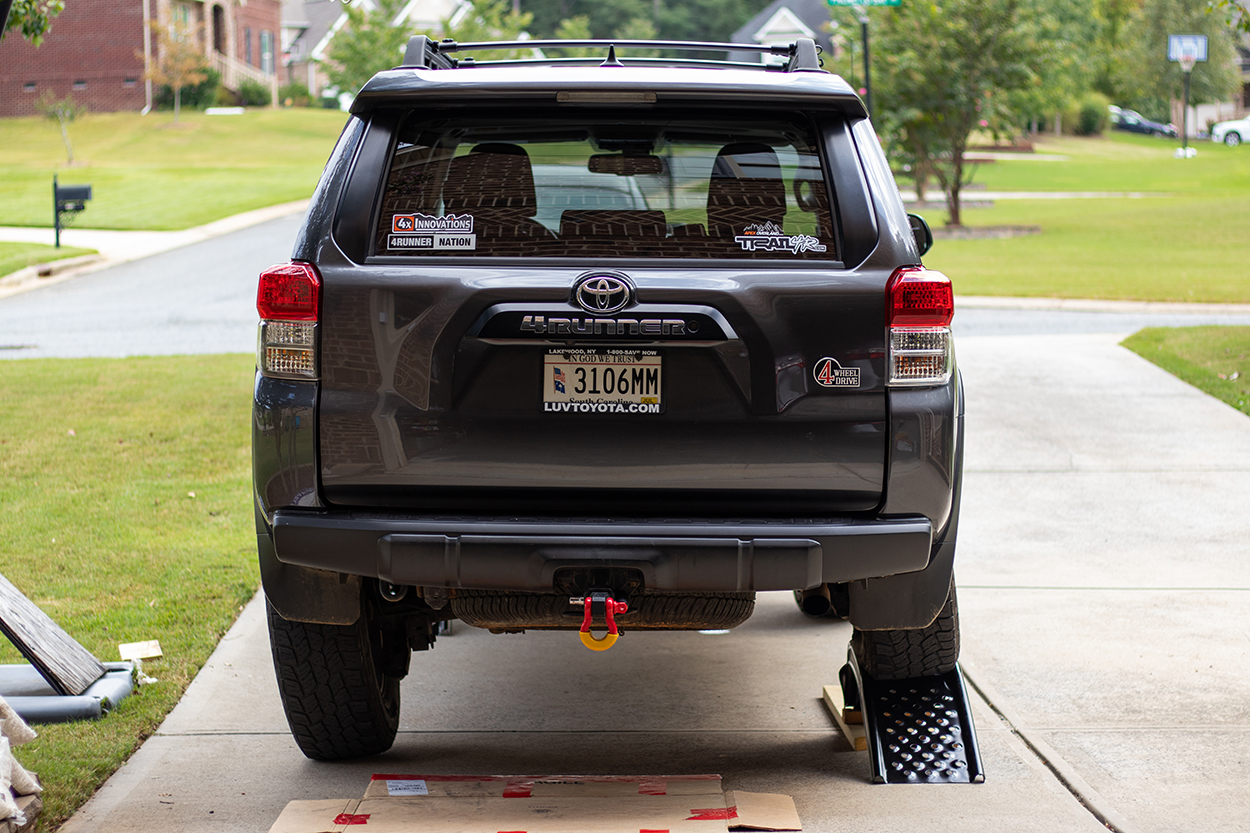 The first step was to take the 4Runner to a level parking lot so I could measure the unloaded ride height at the rear on both sides.  I took the measurement centered on the wheel and measured from the ground to the bottom of the fender flare at the wheel arch opening.

Unloaded, I measured 35-1/2” on the driver side and 35-7/8” on the passenger side (this was with a full tank of gas and since the tank is on the driver side, it may explain some of the lean).  Rather than load up all of my camping equipment, I then drove the 4Runner to Lowes and picked up four 60 pound bags of gravel (total of 240 pounds) and loaded it in the back. 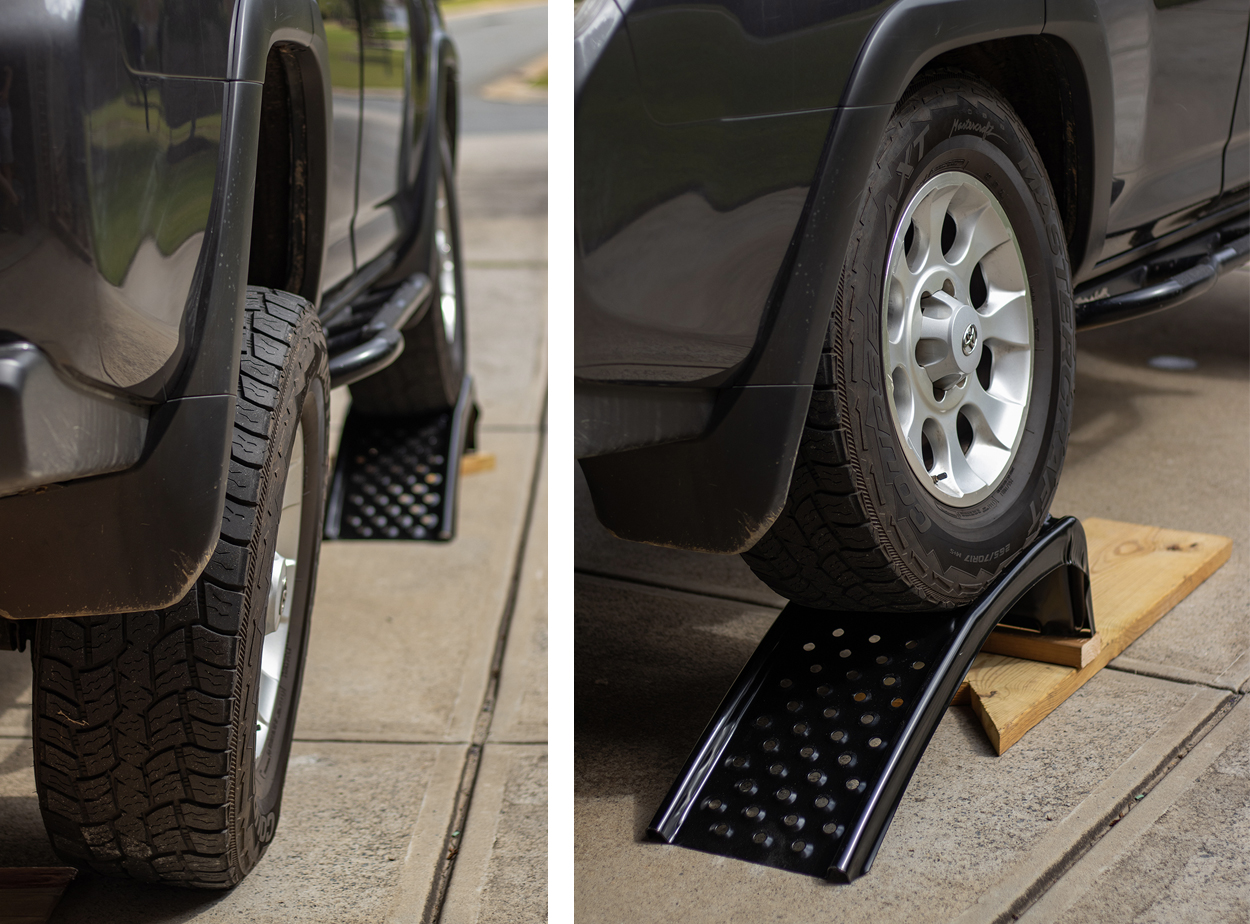 Since I don’t have a lift to achieve full droop on the rear end, I had to figure out how to stretch out the springs enough to slip the Coil SumoSprings™ in between the coils.  What I came up with was to use some 8” steel ramps from Harbor Freight on opposite corners so I could get some flex and I also added some lumber under the front of the ramps to get a bit more lift.  I think I ended up lifting the left front and right rear about 11.5 inches each which proved to be perfect for the installation. 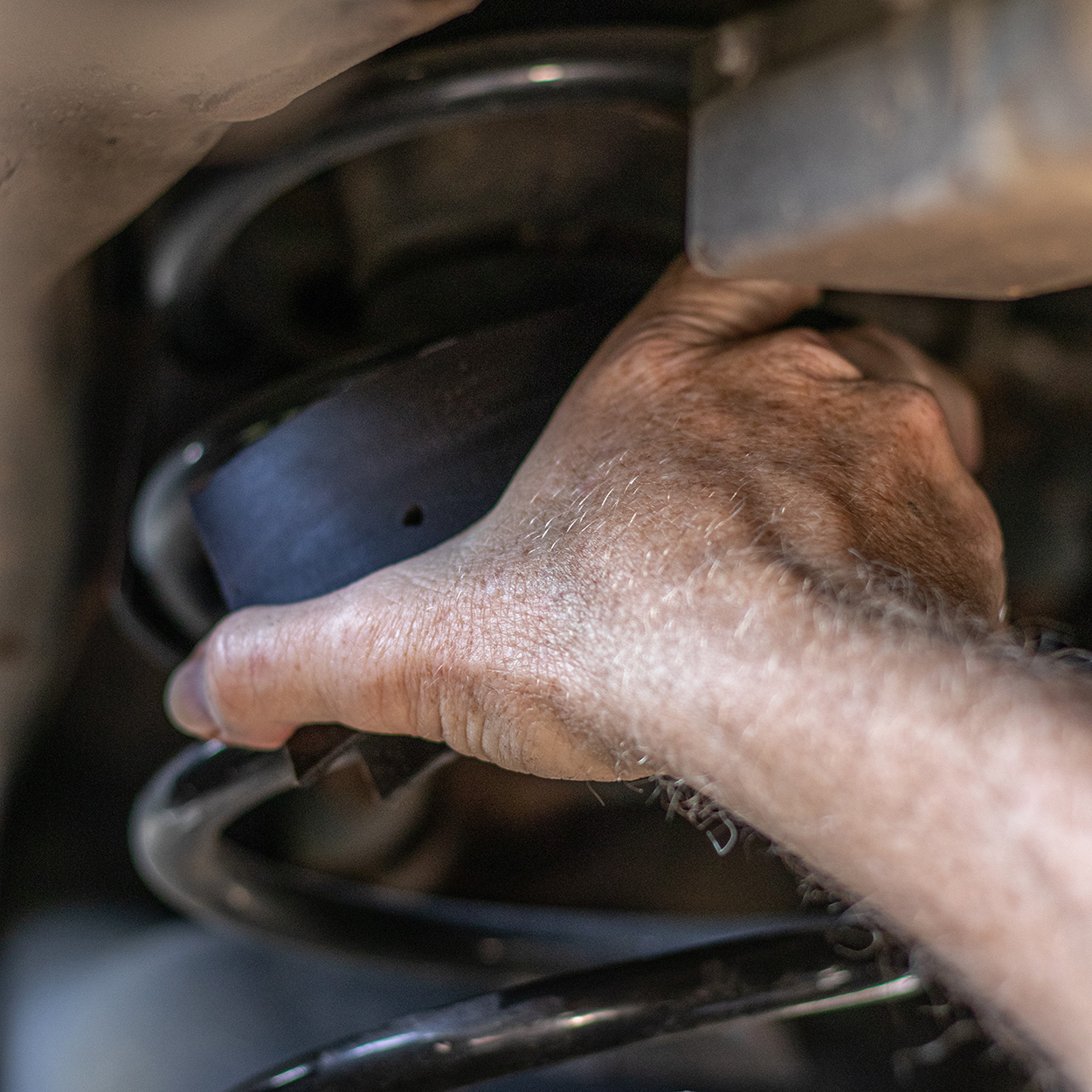 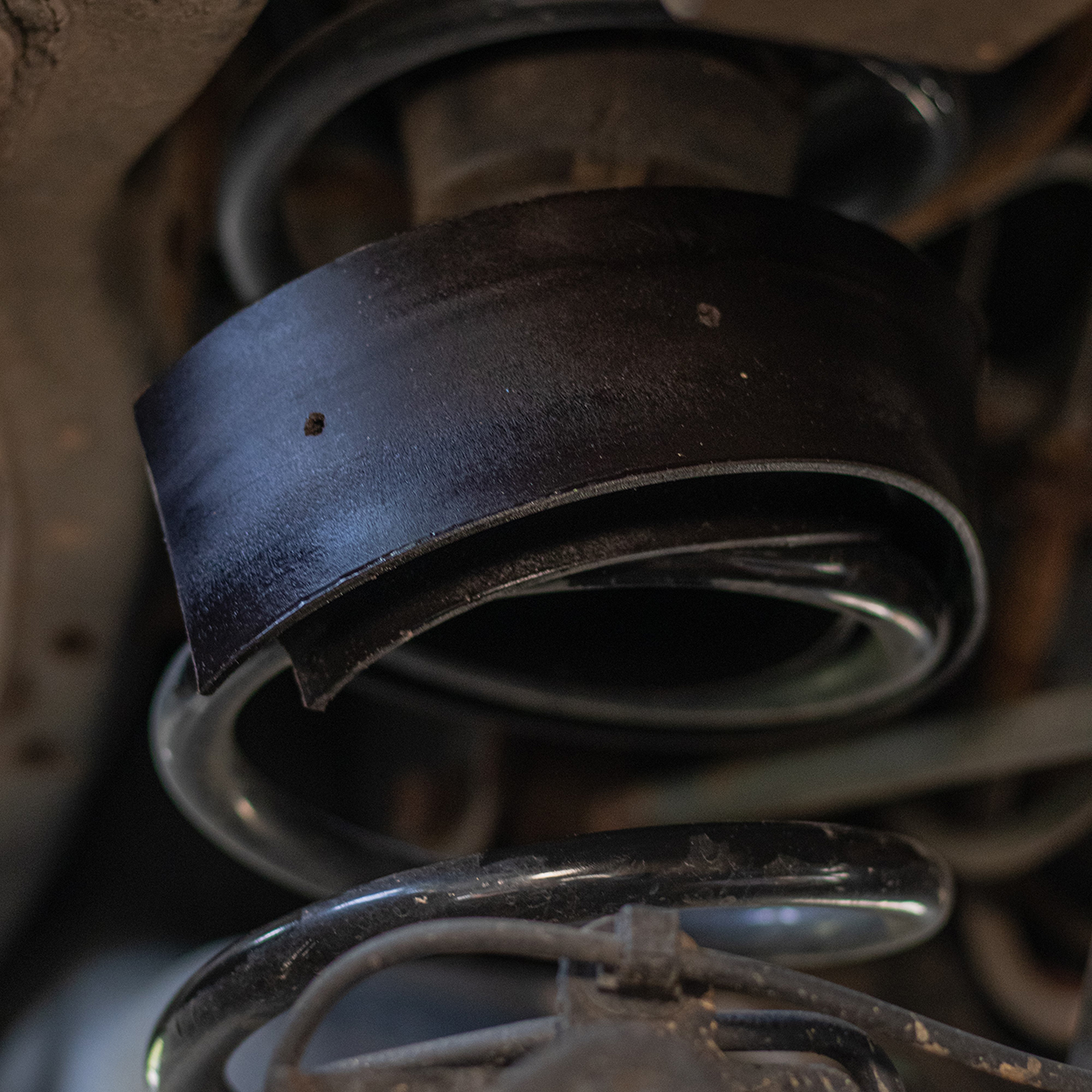 Once I had the suspension flexed, the install was a breeze. I jumped under the truck on some cardboard and slipped the Coil SumoSpring™ in place making sure that the deeper side was on the bottom.  Once you get it started, it pushed in very easily and the gap between the two ends when installed was about 2 inches, so no trimming was necessary (if there is no gap or some overlap, you may have to trim some off of the ends to get at least ½ inch of clearance so the ends won’t touch when compressed).

After the first one was installed, I pulled off the ramps, flipped them around, and pulled up on the right front and left rear so I could install the right side insert.  The right side went even faster than the left side because I already knew what to do. 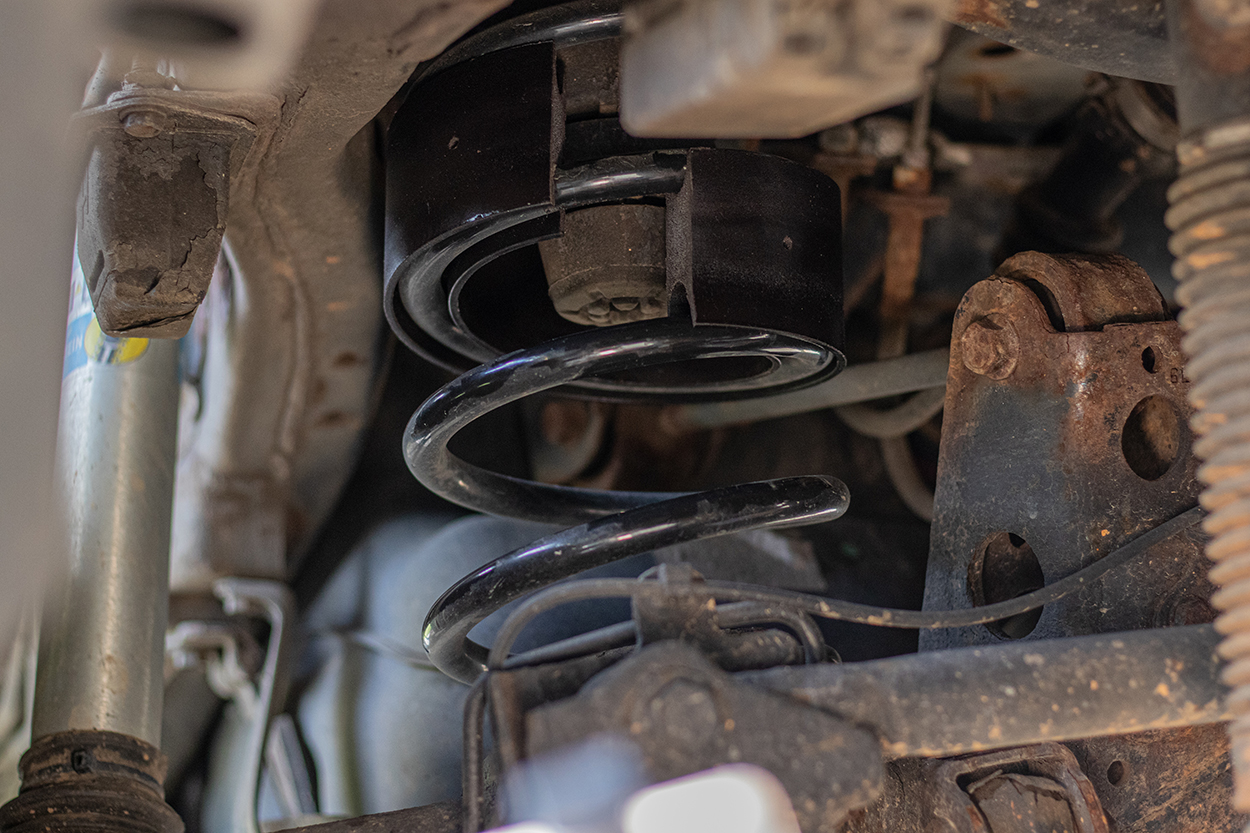 There were no specialized skills required for this installation, and as I said earlier, I did the install on some steel 8” wheel ramps and not on a lift (which may not have been easier because it would have been harder to get the flex on a lift).  There was nothing to remove and no tools were required at all.  I didn’t even need the zip ties that were supplied as they are only needed if the Coil SumoSpring™ is loose between the coils and mine fit very tightly.

Did it make a difference? 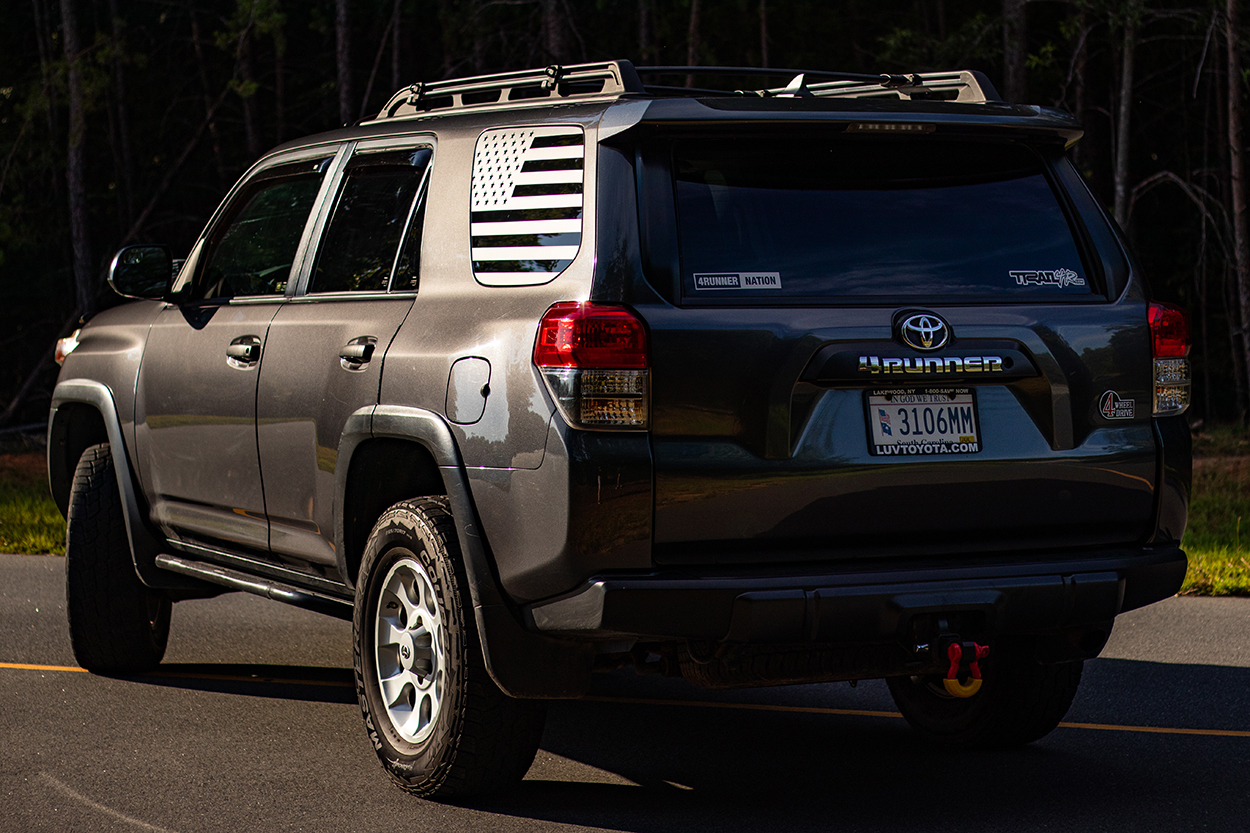 My ultimate goal was to have a truck that did not sag in the back when I loaded up the camping gear and I feel that I achieved that goal with the Coil SumoSprings™.  The install could not have been easier and in the two weeks since the install, the ride has been the same as before (certainly not any worse).

I do notice that the 4Runner rides just a bit higher in the back and that is nice to have a little rake in that stance again.  Someday I would like to put a real lift with new springs on it, but for now, I am happy with this setup.  As you can see from the photo below of my skidplates, I do wheel the truck when I can (usually at Uwharrie), so it is not just a Pavement Princess or Mall Crawler and I am more interested in modifications that actually enhance performance rather than just improving looks.  So far, it does not seem that the Coil SumoSprings™ have not impacted my articulation and the tiny bit of extra clearance from the microlift in the back isn’t going to hurt.

In summary, if you are looking for an improvement in load carrying capacity for camping equipment or light towing, you can’t really go wrong with the Coil SumoSprings™.  They will definitely not replace an actual lift (they are not intended to) and they probably are not a good idea if you are doing a lot of heavy towing or are trying to offset the weight of a steel bumper and tire carrier, but if you are just doing some light towing or loading up the back for a weekend of camping, they may be just what you need and you won’t have to spend a lot of money.

I’ve been looking at popping these in the rear springs for really heavy full family trips. Gas tank is on the left side.. wonder if that is what contributed to the slight difference in heights? thanks for the write up!

The gas tank issue is exactly what I suspected. I took the before measurement a few days before the install and likely had more gas in the tank at that time. The truck does not look like it has a lean normally. I think these would be perfect for the occasional slighlyt heavier load.

Looks like a decent option to set and forge. Innovative and simple for sure. However, you can get Airlifts helper bags and a portable pump for the same price. This gives you way more adjustability for different loads and towing (which I do a lot). If anyone is worried about durability or maintenance on bags, I have had them in on my 2016 4R for two years with zero issues.

I think those are a good option for even more load capacity if that is your primary or frequent use of the vehicle. I am not sure it is the best option if you also do a lot of off-road where you need the articulation. The install on the Coil SumoSprings was literally 3 minutes per side once it was up on the ramps and is something you could put in when you need it and take out if you thought it would improve articulation off-road. The AirLift bags seem to take about 2 hours to install, but my concern would be that when you deflate them, they hold their shape well enough that you can’t get all the air out. As soon as you go off road and the suspension is trying to twist, the air remaining in the bag would limit your articulation even if the resting pressure was low. If it was at 0psi when level and you squeezed it down to half size, it would be the equivalent of having 14.7psi in the bag. To eliminate this problem, you would have to manually squeeze the bags down to get the air out and then I don’t know if they would rattle around or get squeezed between the spring coils and get damaged.

Hey Rick,
That’s good it is easy to take those on and off so quick. A good option for sure if you want a little help. You are correct in that you get a little less articulation with the bags. But if you aren’t doing serious crawling it does not affect things too much. You do need to keep a minimum of 5 psi so they maintain their shape in the spring so they do not fold, move around, and get damaged. Install did take me about 2 hours as mentioned. Just wanted to throw out another option to those looking for solutions in the same price range but for adjustability. Definitely many factors to weigh with everything we do to our lovely rigs. Have a great weekend!