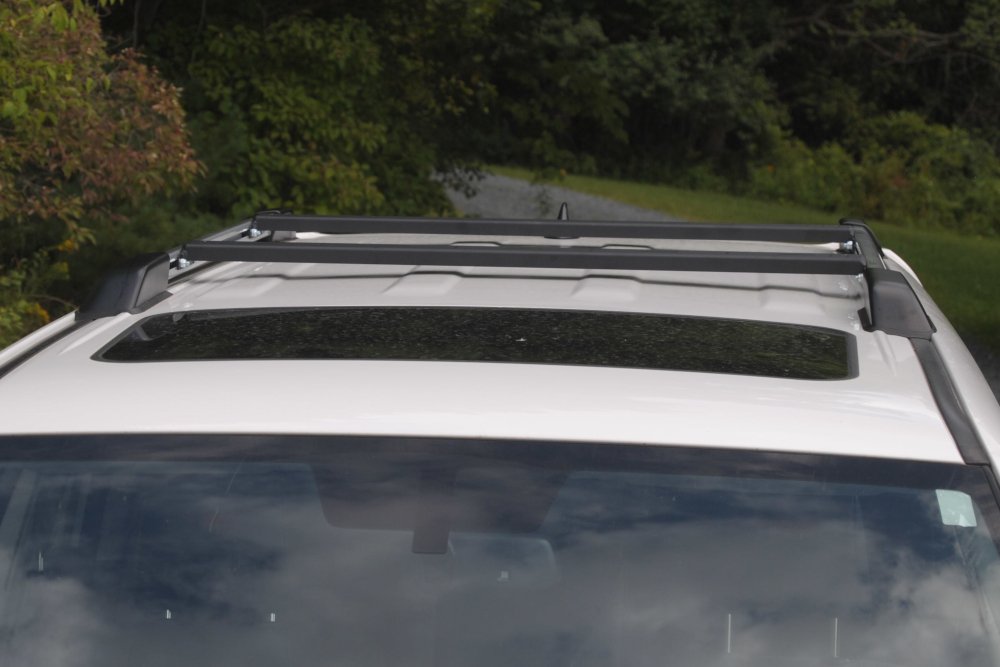 The Victory 4×4 4Runner Roof Rack Crossbars occupy a weird place on the rooftop accessory market. They are not the hyper versatile full or partial-length roof racks, carrying rooftop tents, recovery boards and so forth. But they’re also not the standard crossbars you can get from every Toyota Parts counter.

Instead, they offer a middle option. They’re more versatile than the Toyota crossbars, with pre-drilled holes and slots for attaching various accessories and the option to drill your own holes without significantly compromising the integrity of the crossbars.

On the other hand, they’re much less expensive than a rack. They’re much less intimidating to install too, since mounting a rack requires at least unbolting the factory roof rails, and may even require drilling into your roof for full-length options.

We have already seen a review on the full-length Victory 4 x 4 roof rack, so now let’s look at the crossbars. The Victory 4×4 4Runner Roof Rack Crossbars offer a middle option; simple yet versatile, budget-friendly yet durable. But do they deliver on that promise?

These crossbars are going to be very similar to the well-known LFD off-road ruggedized crossbars as well as the Rago fabrication roof rack crossbars. All seem to be of similar quality, however, the victory 4×4 roof rack crossbars or a bit less expensive. Let’s jump into the installation and see what these are all about. 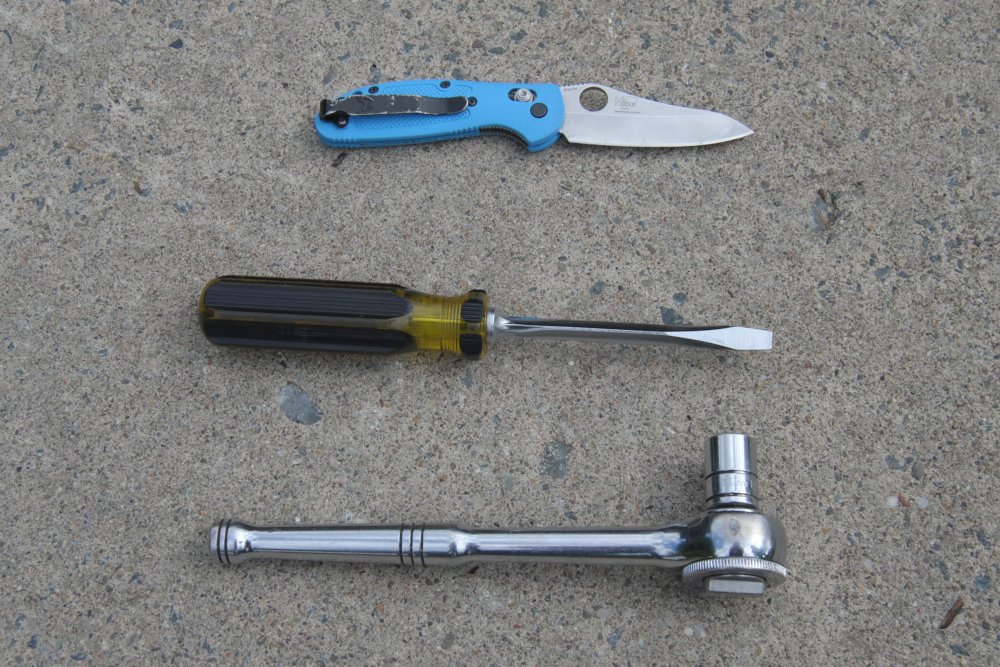 Not much necessary here. A knife to open the box from Victory 4×4, some sort of prying tool to get the endcaps off (or a screwdriver if you’re a heathen like me), and a 13mm socket and ratchet.

Two quick notes about the ratchet though: 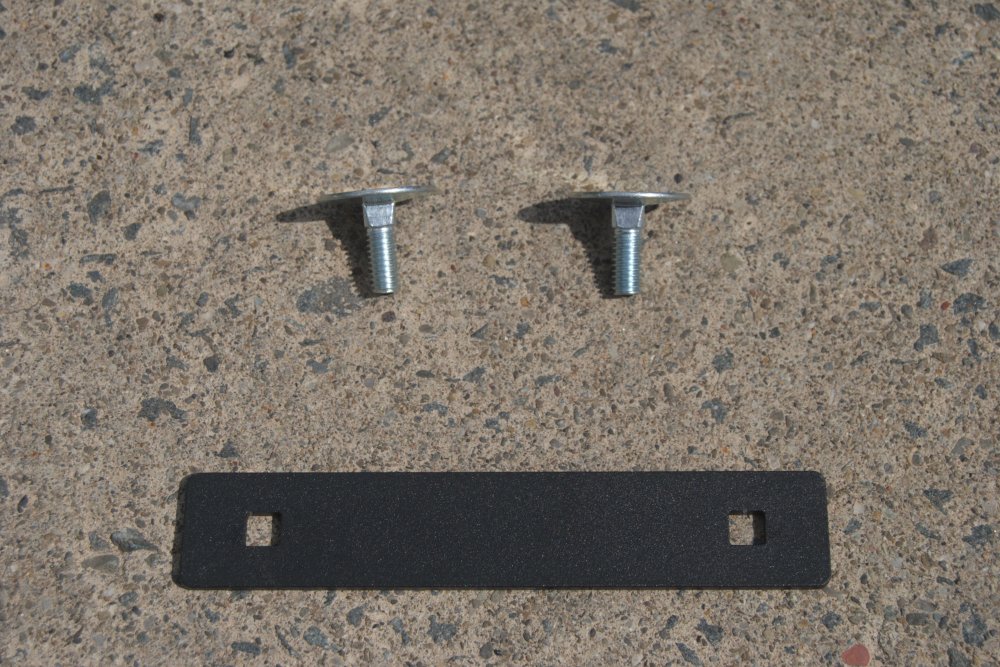 This part is easy.

The threaded bits (elevator bolts, technically) pop into the pre-cut square sections on the powder-coated sliders. The square sections provide resistance when you’re tightening the Victory 4×4 4Runner Roof Rack Crossbars into place, and the flat part serves as a built-in washer spreading the pressure out for a more secure hold. 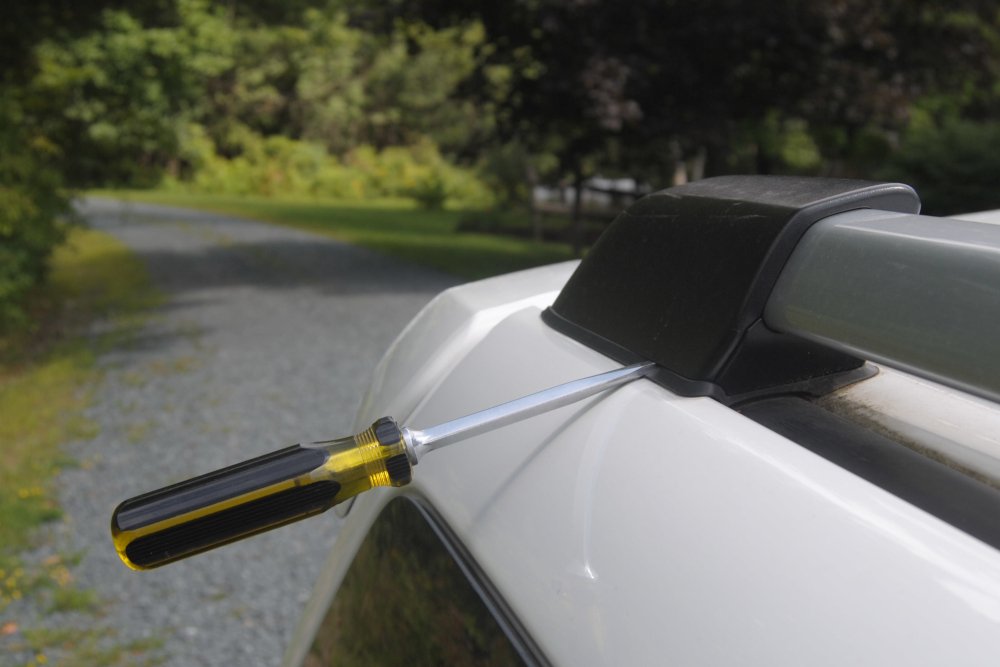 This is probably the trickiest part of the process.

You want to slip your pry tool(/screwdriver) between the rubber gasket and the rear plastic endcap. Carefully feel for the tabs (two on the outside, one on the inside) holding the endcap on and push down on the tool to pry the endcap up and out. Repeat on the other side.

Remember to do your rear endcaps, as the structure of the bracket at the front endcap means you you cannot slide anything into the factory roof rails from there. Also, I put a folded handkerchief between the screwdriver and my vehicle to avoid damaging the paint while doing this step. But the combination of a black bandanna, a black screwdriver, and black endcaps made it kind of difficult to show what I was doing in a photograph.

When you’re doing this on your own, make sure to put something between your tool and your paint, otherwise, you may do damage. 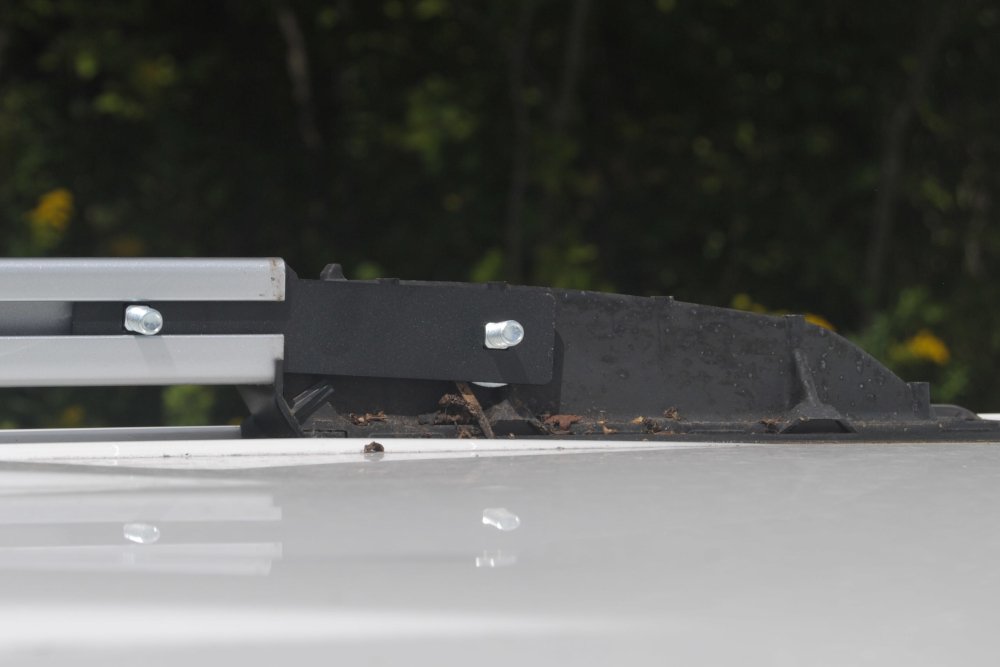 Just like my favorite Black Flag album, Slip It In.

Also, this would be a great time to clean out all the leaves, debris, and spider nests that accumulate under your endcaps. Ew.

So simple there’s no picture necessary.

I found it easiest to insert the inside tab first, then pull the endcap down and out to engage the two outer tabs. A few quick taps with the heel of your hand may be necessary to get everything back in place. 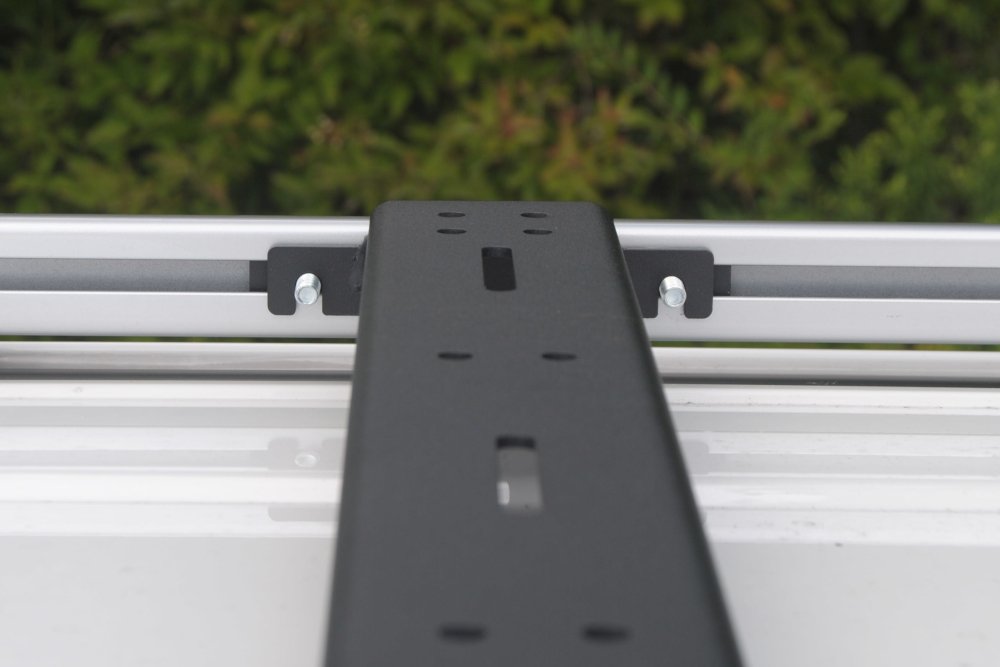 These Victory 4×4 4Runner Roof Rack Crossbars feature “open” tabs on one end and “closed” on the other.

It probably wouldn’t make a difference in the strength, durability, or safety of the crossbars. But the chance that it might felt like it was worth the ten seconds to walk to the other side of the 4Runner to mount the other crossbar. 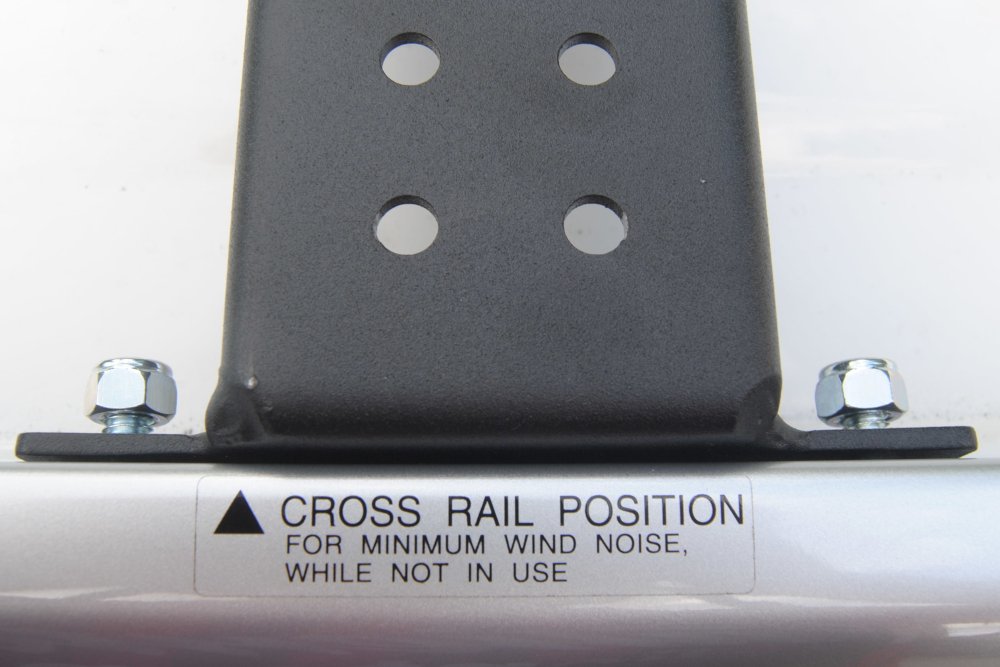 Once the crossbars are resting on all four elevator bolts, finger-tighten then ratchet down the included nyloc nuts.

My 4Runner, with its factory roof rails still intact, has marked points suggesting what may be the optimal location for reducing wind noise. Since my intended use allows a fair bit of flexibility as to where I put the rails, that’s where I put them. Though adjusting if needed would be easy, with just four bolts to loosen before sliding the crossbar forward or back. 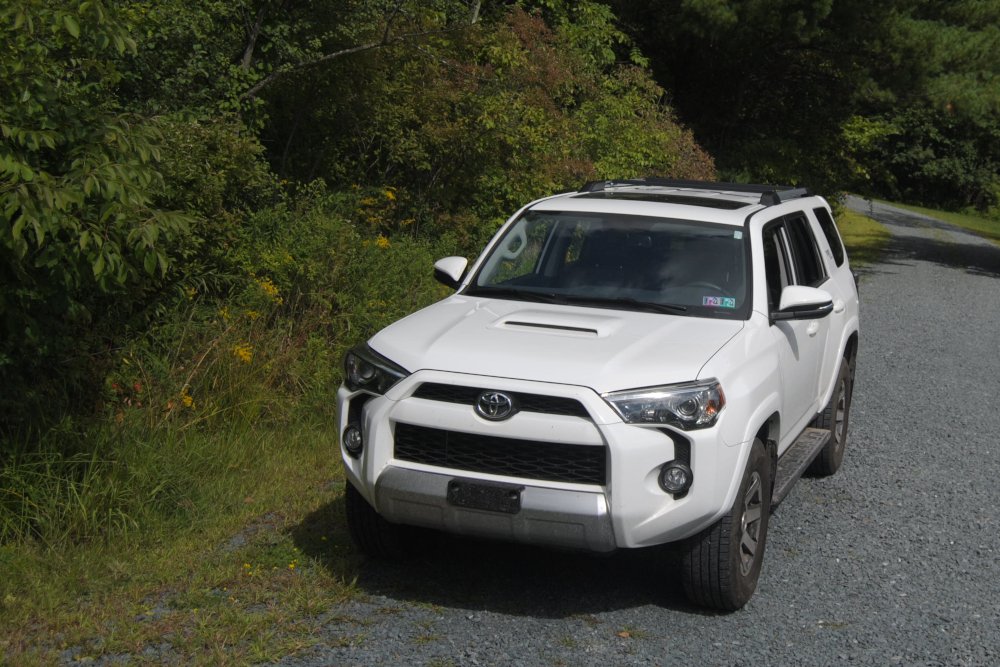 Any review is about context.

The right accessory for one person isn’t necessarily the right one for everyone. So understanding the context that leads me to the Victory 4×4 4Runner Roof Rack Crossbars is an important part of understanding why I feel about them the way I do.

While not new, this 4Runner is new to me.

And as such, the bank still holds the title until I give them several thousand more dollars. Which, in abstract, isn’t a big deal; I budgeted for this purchase, got a fair price for it, and am well on my way to paying it off. But it does mean that whatever “extra” money I have lying around is going into paying off that loan, rather than the dream build that is (hopefully) just a few months away.

But in the meantime, with winter around the corner, I needed something to attach my snowboard rack to. I could have spent less money and just got the Toyota crossbars, but simply put I didn’t want to. I wanted something a little different, and a little more capable.

And the Victory 4×4 4Runner Roof Rack Crossbars seemed to do that. I assumed they would work with my snowboard rack, and then next summer they could be used for attaching cargo baskets, traction boards, Jerry can holders, or whatever else I don’t want to carry in the 4Runner. 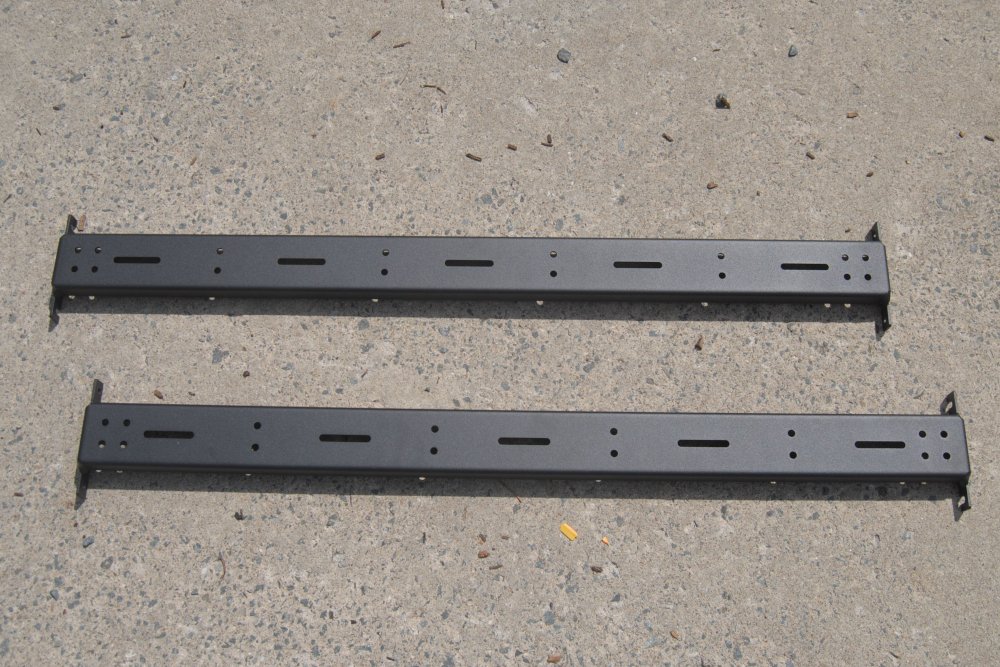 Right off the bat, the quality of these Victory 4×4 4Runner Roof Rack Crossbars is obvious as soon as you open the box. They feel solid, though not necessarily heavy. Which, considering what these are meant to do and where they will be doing it, is important.

You want something strong to hold your rooftop tent, your cargo, your kayak, your whatever. And these Victory 4X4 4Runner Roof Rack Crossbars feel strong. But whatever you can do to save weight, especially this high up on the vehicle, is worth doing. Not just for ease of installation but also for the way shifting your center of gravity up can compromise handling, performance, and even safety.

Victory 4×4 included all the necessary parts, and the most complicated part of the process was assembling the parts that slide into the factory rails. If that’s beyond your abilities, DIY might not be for you.

Once installed they are very low profile, sitting basically flush with the factory rails, with no arc whatsoever simply reaching straight across to the other side.

How is the Wind Noise?

With no music playing, I thought I could hear them at highway speeds, but only when I was trying to hear it. As soon as any music came on or you stopped thinking about it the sound disappeared into the general hum of a vehicle traveling at sixty miles an hour. 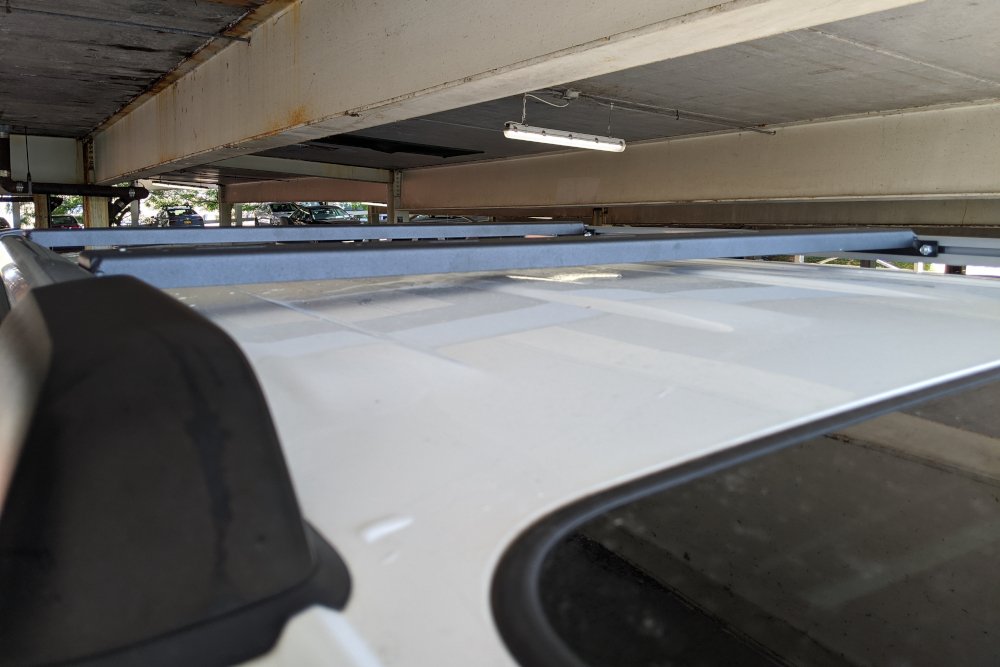 All told I was very happy with these Victory 4×4 4Runner Roof Rack Crossbars until I tried to test-fit my snowboard rack. Because there’s no arc to the crossbars, they sit closer to the roof at the center of the 4Runner than they do at the edges. So while I could get the feet of my rack around near the side of the vehicle, when I tried to attach the other foot closer to the middle of the bar there simply wasn’t enough clearance. They didn’t fit.

To be clear, this is a now-discontinued model of the Yakima PowderCat6 rack.

You can’t buy this rack anymore and the way the feet attach to crossbars has changed significantly since then. So maybe your rack, or a new rack you buy, wouldn’t have these problems. But even then I’d think about the clearance between the roof and a pair of ski bindings when carrying skis. 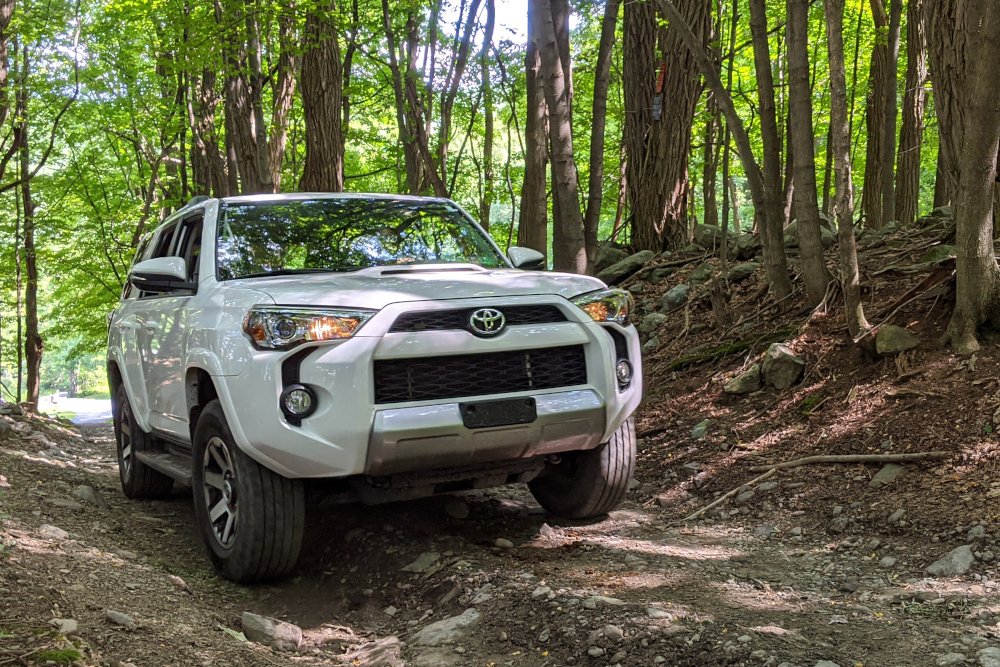 In retrospect, I probably could have used a different mounting system for my snowboard rack. Either buying a new set of feet from Yakima or using the pre-drilled holes in the Victory 4×4 4Runner Roof Rack Crossbars to mount the rack directly, no feet needed. But for the amount I will use the rack, I would rather go with something I know will work.

If you’re looking for strength, or simply a better look, these Victory 4×4 4Runner Roof Rack Crossbars are an obvious improvement over the standard Toyota Crossbars.

The low-profile fit is significantly less “soccer mom”. Plus the ability to attach accessories using the pre-drilled holes and slots was a selling point for me. Those are the exact reasons I wanted these Crossbars, but they’re also the reason why my Yakima rack didn’t fit.

So look at it this way- these Victory 4×4 4Runner Roof Rack Crossbars are an ideal option assuming they work with whatever you’re trying to carry. If I were adding a rooftop tent, or trying to carry traction boards, these would be an ideal option. But for my immediate use, carrying gear to the slopes, they weren’t the right tool for the job.

But I don’t hold that against them, and neither should you.

I think these make a lot of sense if you are not in the market for a full rack.