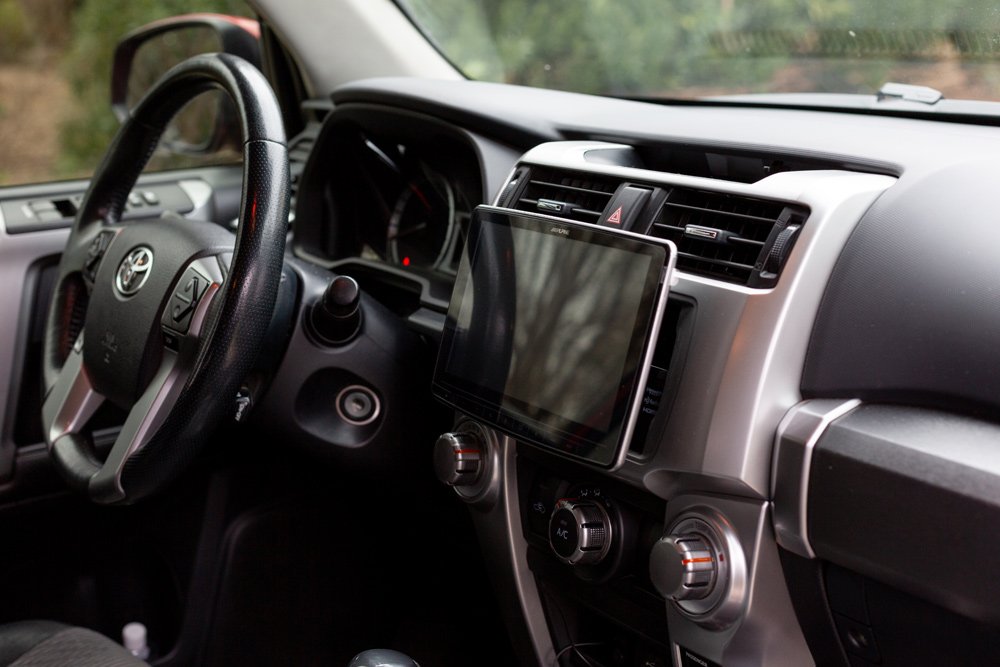 Why Upgrade the 4Runner Head Unit?

To bring my 4Runner up to speed with this current trend, I chose to install the Alpine Halo9 iLX-F309FRN. Although being one of the priciest of options, it’s one that comes fully plug and play, with no splicing, adapting, or extra wiring to adapt to the factory harness.

This install time will take anywhere between 2 to 3 hours based on your experience level. For a video tutorial, click here. 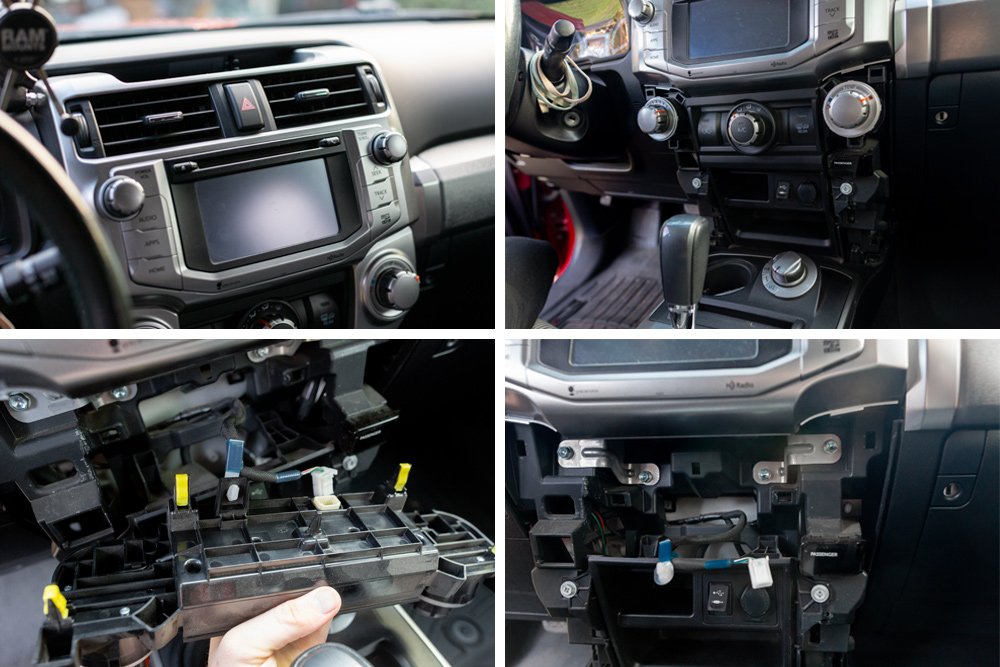 Carefully pull away driver and passenger side trim pieces below the head unit. Then pull away from the climate control. You can see this done in quite a few places on Trail4R.com but here is a good one. 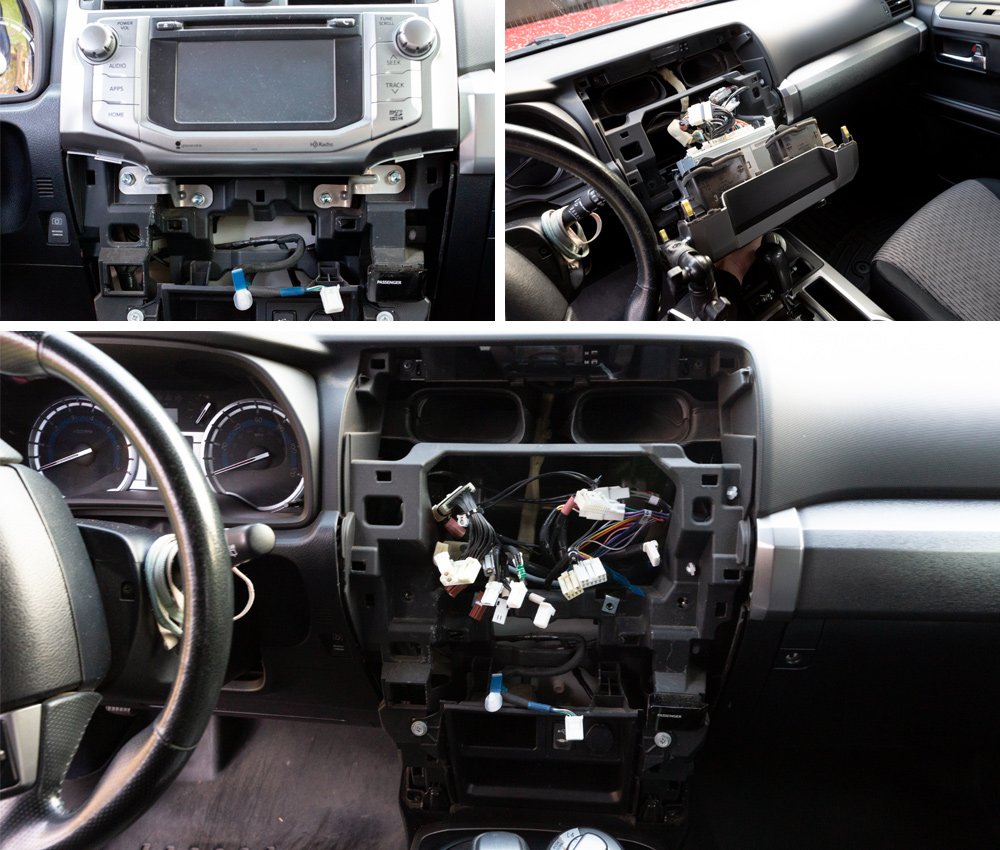 Using a 10mm socket, remove the 4 bolts holding the radio in place and remove the radio trim panel by gripping the sides and slowly pulling away.

Pro Tip: Use a protective blanket or towel to cover the shift knob 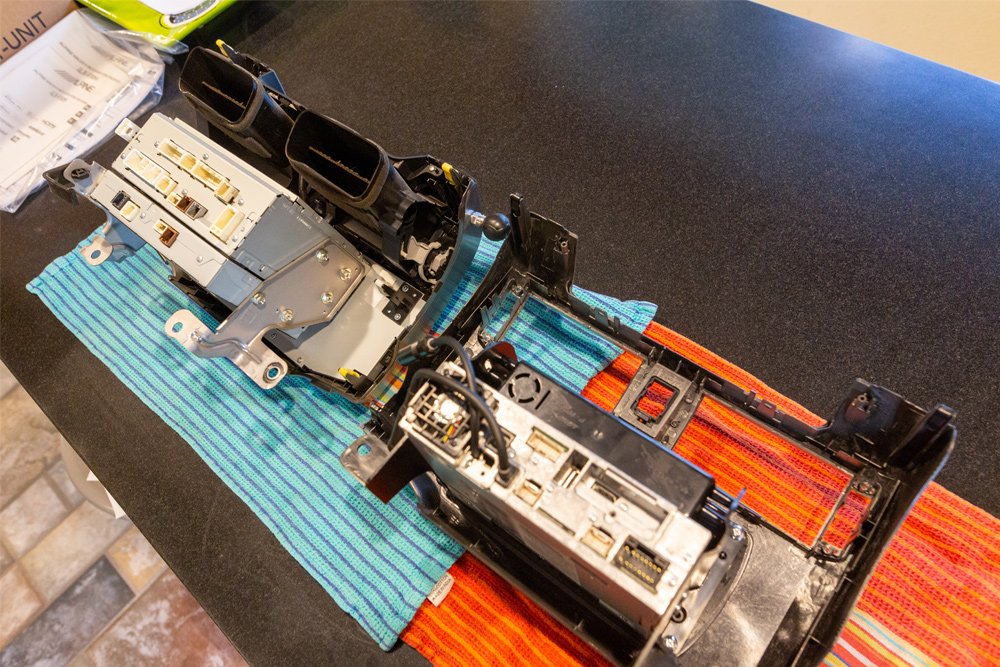 Remove the left and right air vents by using a flat head screwdriver to release the lock tabs on the sides of the vents. 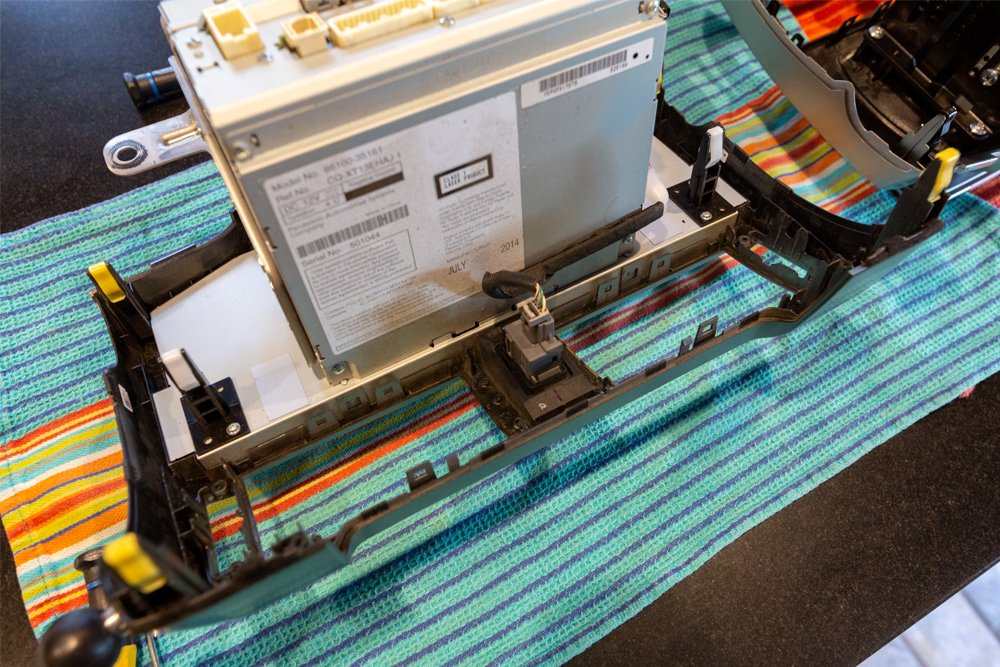 Release the locking tab to disconnect the hazard light on the factory head unit.

You can either use a razor blade to cut the securing tape of the hazard light harness or you can disengage the factory clip with a small flat head screwdriver.

Apply light pressure to the clip holding in the main hazard switch and push it out from the rear to the front of the radio panel.

Using a small Phillips screwdriver, remove the (6) small screws holding in the top and vent trims.

Install the hazard light switch, top and side vent trims utilizing the factory screws from the previous step, into the iLX-F309FRN radio trim. Snap left and right vents into place. 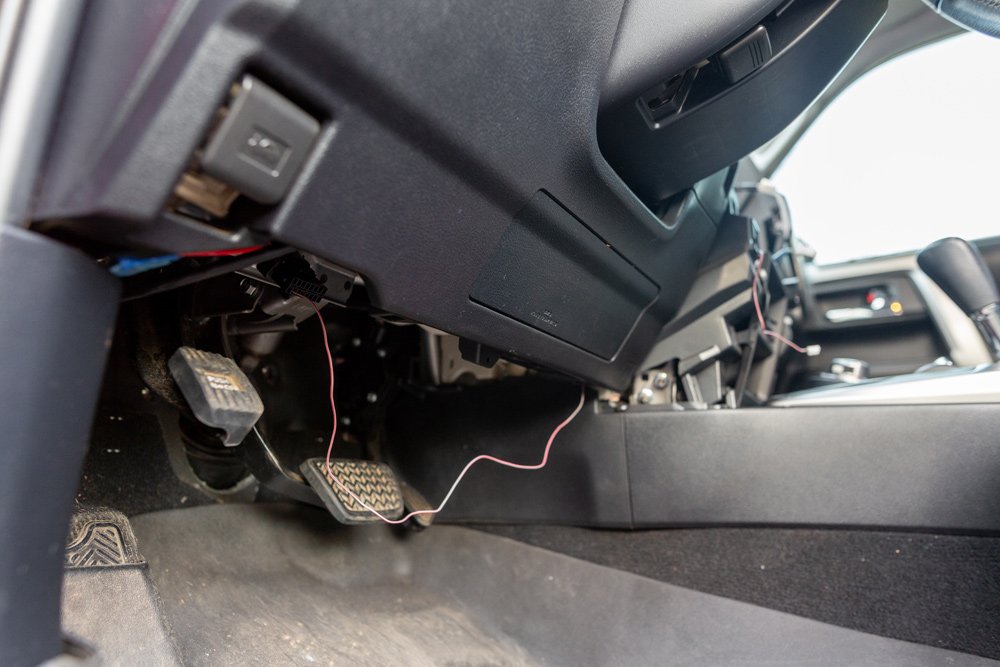 Running this behind the dash kick panel up into the cavity behind the head unit.

This step is not included here, at the time this article is written, I was still deciding on a different placement for the microphone. The wiring of the mic can be found in the installation video here. 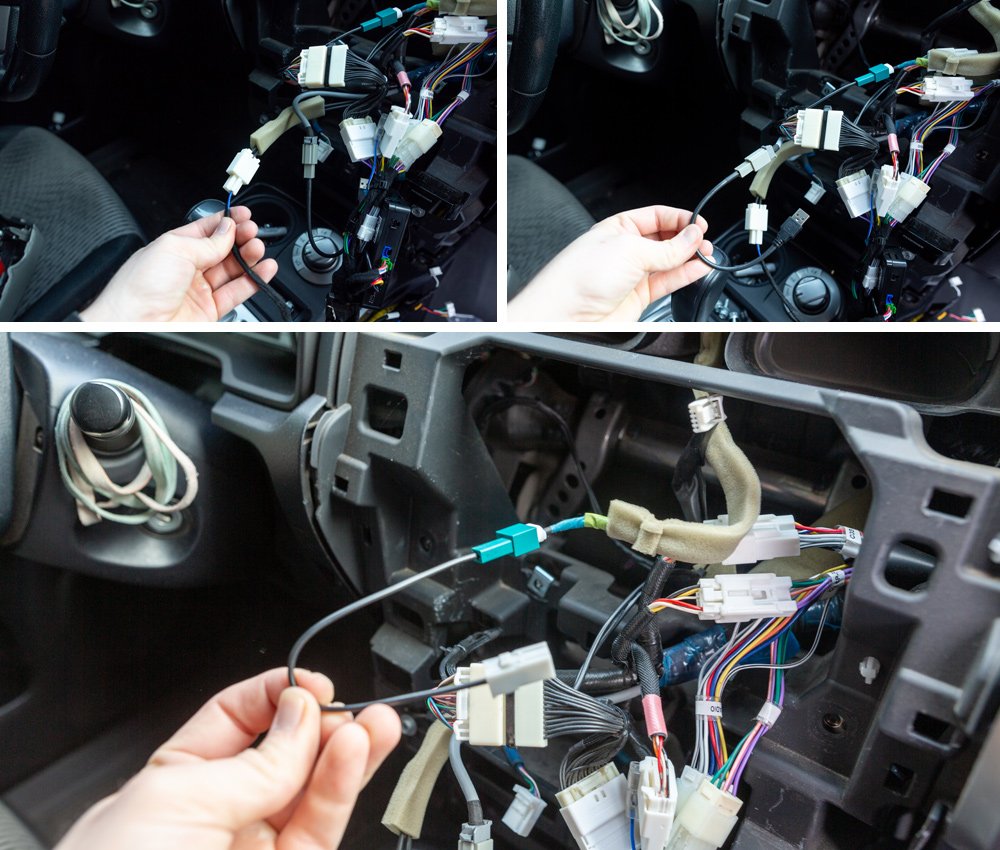 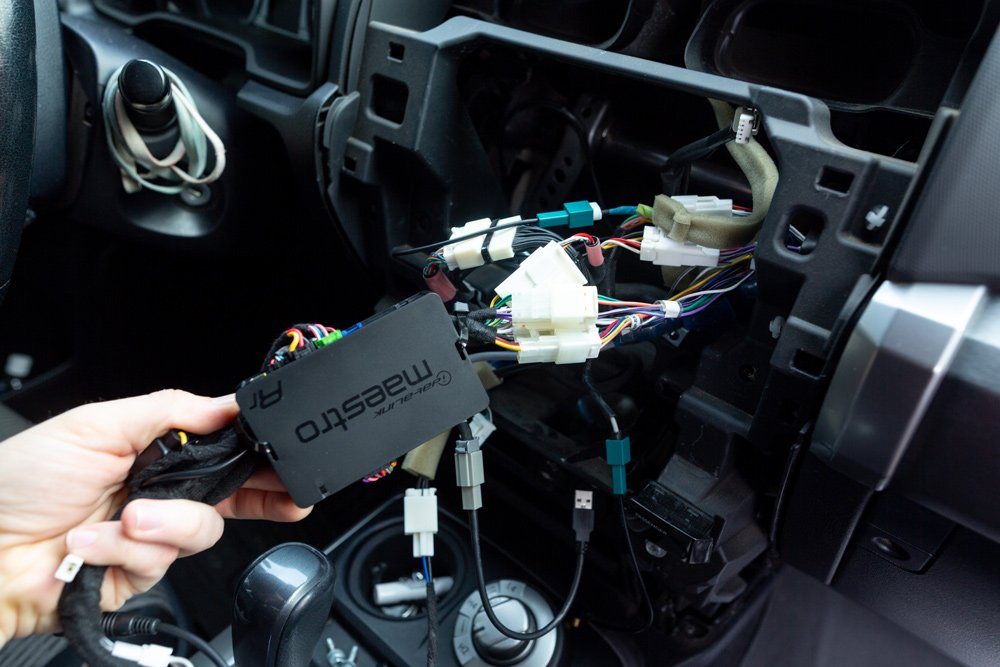 Then use the (x2) factory screws from the factory head unit and secure with a 10mm wrench.

Turn the vehicle’s ignition to ACC, turn on the unit and select your language. 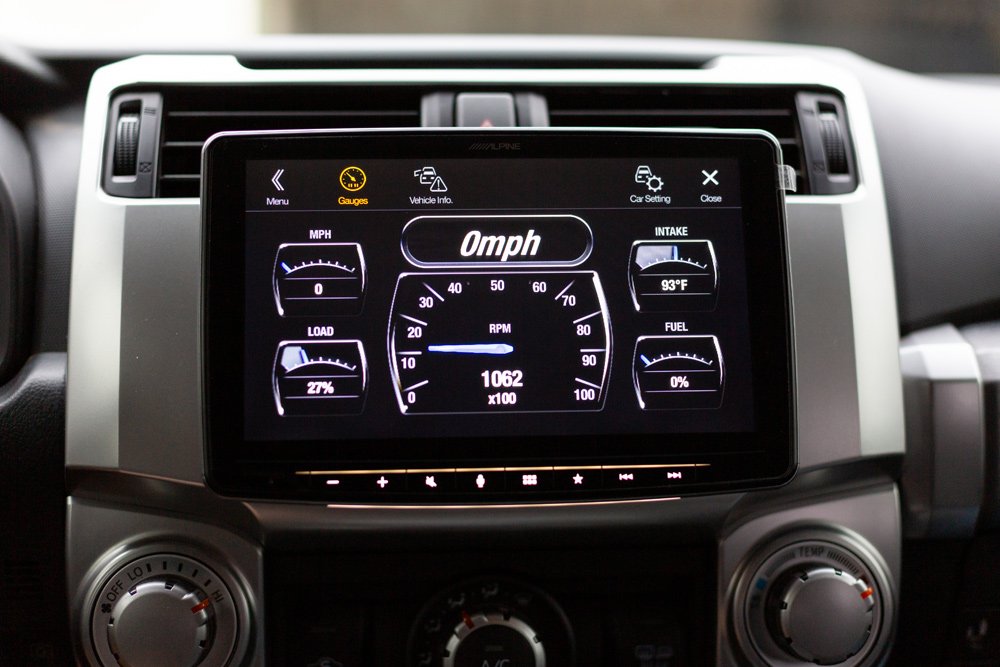 The new Halo9 is ready to use, keep in mind that you will not be able to access the settings menu unless you are in park, and the emergency brake is applied.

The Alpine Halo9 is HUGE! It dwarfs the factory head unit display. Surprisingly, it actually fits the design and style of the 4Runner’s interior.

In the beginning, I thought having a floating display would not mesh with the factory styling, but as floating screens are becoming more and more common in newer vehicles, I found it easy to get accustomed to. The screen appears to sit up high, partially intersecting the above vents, however, it has no real large effects on blocking air to the driver or passenger. 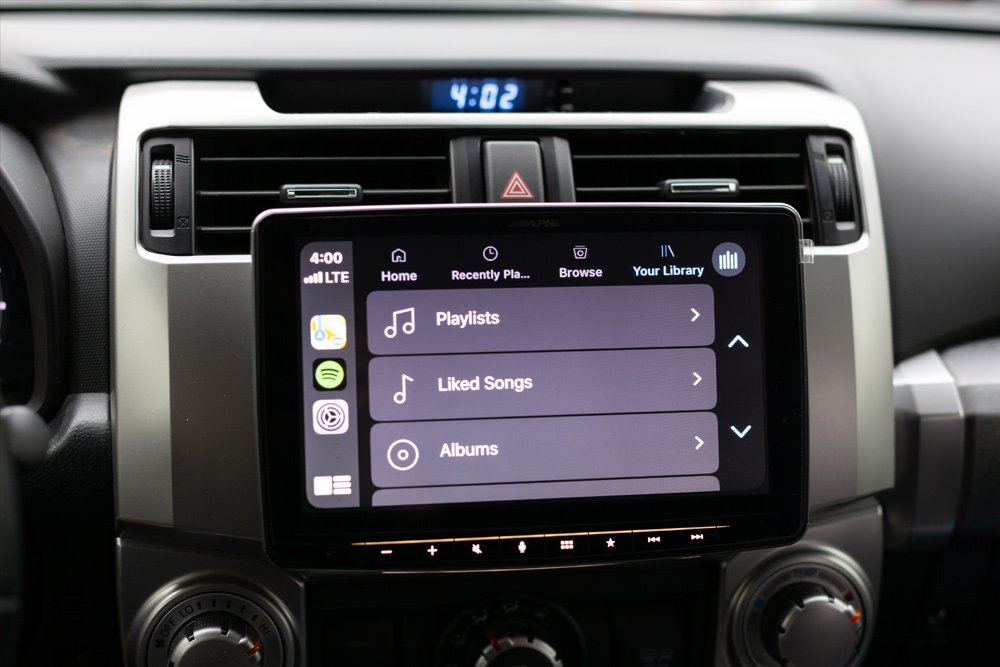 The user interface is easy to use and navigate through.

One of the concerns I had about the unit was start-up times. The Alpine Halo9 takes about the same amount of time to boot and pair with my phone in about the same time as the factory head unit.

I haven’t felt like I have needed to wait for my phone to connect to the Bluetooth or via USB for the Apple Car Play, before or during driving.

It all works very seamlessly and it is nice to have an advanced piece of tech in the outdated 4Runner for once.

The buttons on the screen don’t have any feedback, they are touch-sensitive. I was a little worried about having a touch button for volume and such, but they are performing just as well as a true clicky button.

While driving, the larger screen is easy to navigate through, bouncing through the car play menus, running Spotify, directions, pulling up messages, all a breeze.

Previously, my phone was mounted up high in the line of sight for all of this, after running this head unit I found myself off my phone less while driving and letting the car play unit do all the work. 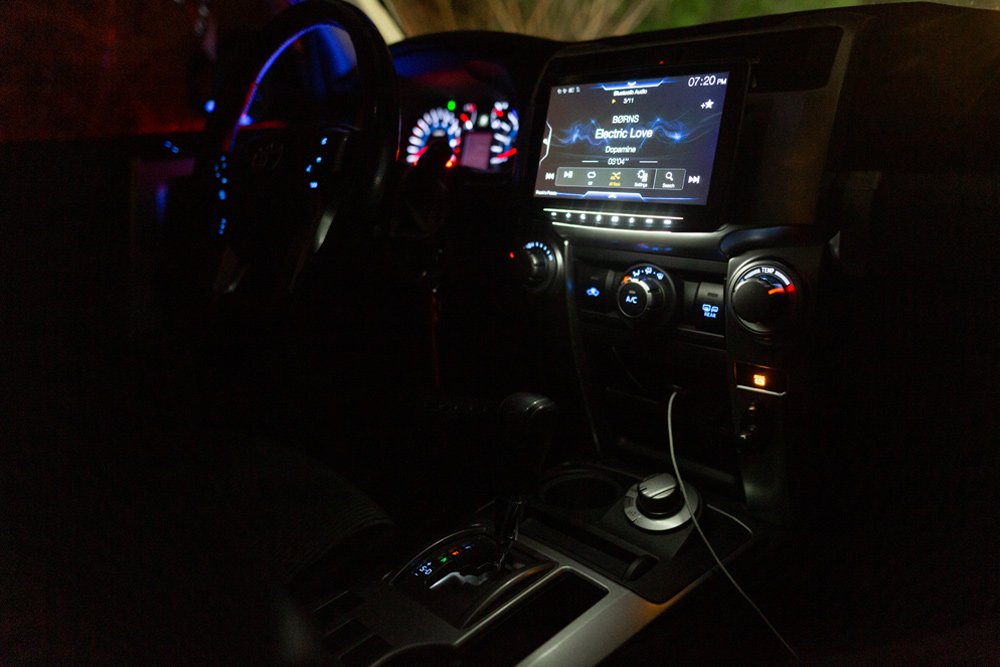 It doesn’t take too much to outshine the factory head unit but the Halo9 does it in a big way.

Streaming songs via USB with the factory head unit, I would run into issues with “buffering” when skipping songs in rapid succession, and the Halo9 blows through songs with ease.

One of the small little features that I really enjoyed is that there is a small strip on the bottom of the unit that adds a soft illumination to the center console area.

With the Maestro harness, the Halo9 is able to pull information from the vehicle into a gauge cluster to display a tachometer, speedometer, etc. But most importantly, it can display tire pressures! When airing up, or down, you could relax in your vehicle, and keep an eye on your pressures.

After about a week of use, I had only about two real gripes with the aftermarket unit. The large 9-inch screen fits is at home in the prehistoric platform of the 4Runner. However, driving at night the screen can at times feel a little too bright. While it has a good amount of adjustability, I wish it had a little more. I prefer driving with a nearly dark cabin, and that can be hard to ask for with such a large screen.

While it is a direct plug and play unit to the factory harness, I am currently running an OEM Audio+ Reference 500 series. Plugging into the factory harness worked great, putting out more power than the factory head unit, but didn’t sound too good when connecting to my OEM Audio+ system, negating the need for all the corrective settings the OEM Audio sound processor is doing. I spent a lot of time adjusting the EQ and settings on the Alpine head unit to get it close to how it sounded before, but I couldn’t get it just right.

I want to give a shout out to OEM Audio+ who reached out to me offering to help reflash their sound processor, so I wouldn’t have to fight it to bring it back to the way it sounded before. OEM Audio+ has some of the best customer service we have experienced.

These two small qualms aside, I really enjoy how simple, and minimalistic the Alpine head unit is. Apple Car play is such a joy to use while driving and makes simple tasks like selecting new songs or playlists easy while driving.

The Halo9 is a HUGE step up and feels right at home in the as a new command center for the 4Runner.

In the end, as much as I loved those features, the plug and play installation, the lack of adjustability in the screen brightness was a deal-breaker.

I have then switched back to the factory head unit, and if I were to do this again, I would probably go with a smaller screen.

My name is Frank and I have a passion for photography, camping, and long road trips. My 4Runner is my daily, weekend warrior and ticket to adventure.

Does the integration allow you to access the vehicle customization settings (lights/door locks) or how much of the original settings menu is available, if any?

Can you run Gaia maps on this head unit?

I’ve had mine for a year now and my navigation has been spotty at best. Has anyone suffered from inaccurate location for a preprogramed Alpine Halo9 Toyota 4runner ILX-F309FRN? It places my location serval miles away from my actual location

Hey, Frank love your site and post. helps me a lot with my upgrade keep up the great work. i just ordered the halo after looking through your review super excited to bring the 4 runner into the current century. any issues or tricks after using it in your rig for the last bit?

Everything was pretty much plug and play. With any new UI, it takes a moment to get used to but it all works pretty seamless with the 4R and the steering wheel controls.

Any idea if this is or will be available with the gloss black bezel?

The bezel is made by Scosche, I am not aware that they have a black one in the works. I have seen others vinyl wrap or repaint the new bezel.

Will this work in a 2020 and what do I need to integrate XM satellite radio?

This should work for 2012 with even the non-navigation 4Runner. You can always check via Crutchfield here:
https://www.crutchfield.com/g_300/All-Car-Stereos.html?&o=d#&avf=Y&nvpair=FFBrand|Alpine

I have installed this unit and LOVE it!

Nice install! Can a front cam be wired to this??

You can wire a front camera to this unit, but Alpine requires a secondary product from them to wire up multiple cameras.

Thanks Max! It looks darn good, wish it just had a few more features.

Is it possible to shut off the screen entirely while driving?

than why would you complain about being too bright? that is like complaining about being homeless just because you refuse to live in your home and camp in your yard instead.