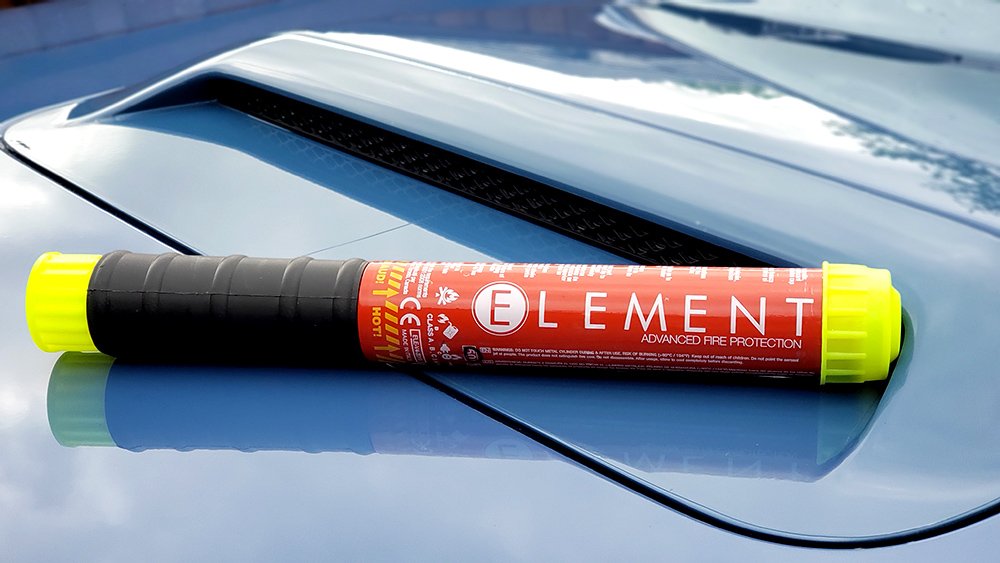 How does it work?

Element fire extinguishers are compact units that operate by vaporizing a chemical powder and depriving a fire of the oxygen required to burn.

They offer a number of advantages over conventional fire extinguishers, including:

Their small size allows for mounting them in a variety of locations, but within quick reach of a driver or passenger when the need arises.

Enter code TRAIL4R10 at checkout of elementfire.com to receive 10% off anything purchased, and free shipping on orders over $99. This offer expires on July 1st, 2020. 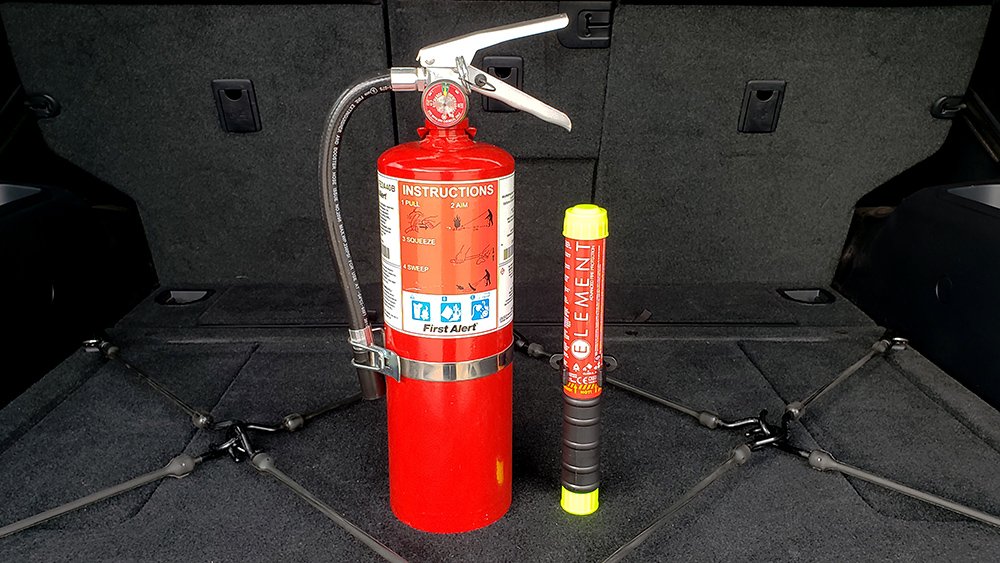 Element fire extinguishers are manufactured in Italy and certified by the European TUV and CE, to have met the European Union standards for health, safety and environmental protection. They are actively used by a number of international military and law enforcement groups as well.

The E50 model Element fire extinguisher is up to 80% smaller, and more than ten times lighter than a conventional 5-pound fire extinguisher. It is approximately 12 inches long, 1.2 inches in diameter, and weighs just under 10 ounces. Despite the small size, the E50 will discharge for 50 seconds, in comparison to the ~11 second discharge time of a standard 5-pound fire bottle.

The E50’s big brother, known as the E100, is only slightly longer and heavier but provides a very lengthy 100 seconds of discharge time.

I spoke with Robert Calisi at Element/Stelvio Brands, and he gave me the full scoop on the function and advantages of Element extinguishers.

A chemical reaction and resulting Potassium Nitrate vaporization create a gas that is heavier than air and smothers a fire. A direct line of sight to a fire is not required to extinguish it. For example, an under-dash or underhood fire could be put out by fogging under the dash or through grill vents, with the heavy gas acting as sort of a blanket, and putting out the fire. 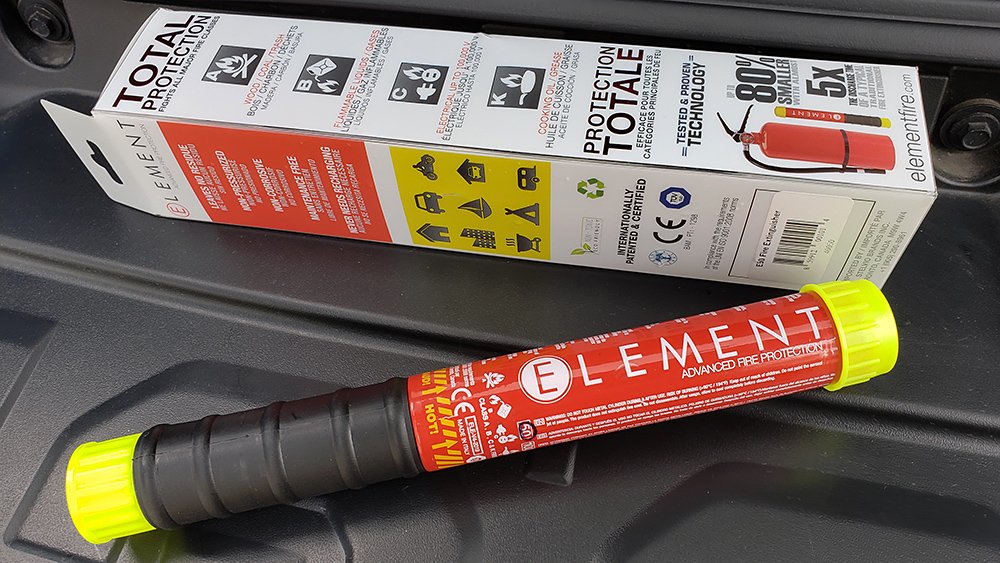 Element extinguishers can be used to put out A, B, C, & K fires (wood, coal, paper, flammable liquids & gases, electrical, and cooking oil/grease). Because no thrust is produced, the use of an Element extinguisher will not spread the fuel, oil, and/or flames.

On the trail, Element fire extinguishers won’t break due to vibrations that we see when off-roading in our 4Runners. Traditional extinguishers can crack at the neck of the bottle, due to the leverage that a heavy bottle puts on the neck area. In addition, Element extinguishers have no gauge to check or potential points of failure. Robert mentioned that conventional fire extinguishers can show to be fully charged, but may not function, due to internal condensation and hardening of powder. That would be bad news in an emergency situation.

Unlike traditional fire extinguishers, the discharge from Element extinguishers is non-toxic and non-corrosive. They won’t leave a huge mess of powder behind after use, either.

Element extinguishers can get wet with no ill effects, but should not be submerged for an extended period.

If need be, Element fire extinguishers can be operated with one hand (i.e., if the other hand was injured, or being used to control a vehicle).

How Do You Use It? 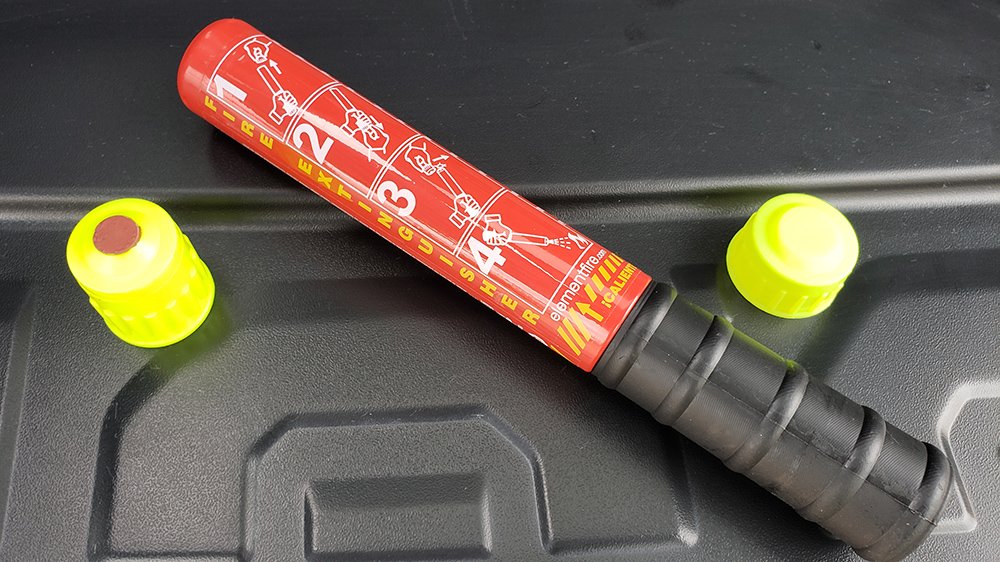 Remove the top protection cap and then discard it.

Hold from the black plastic handle and remove the bottom striker. 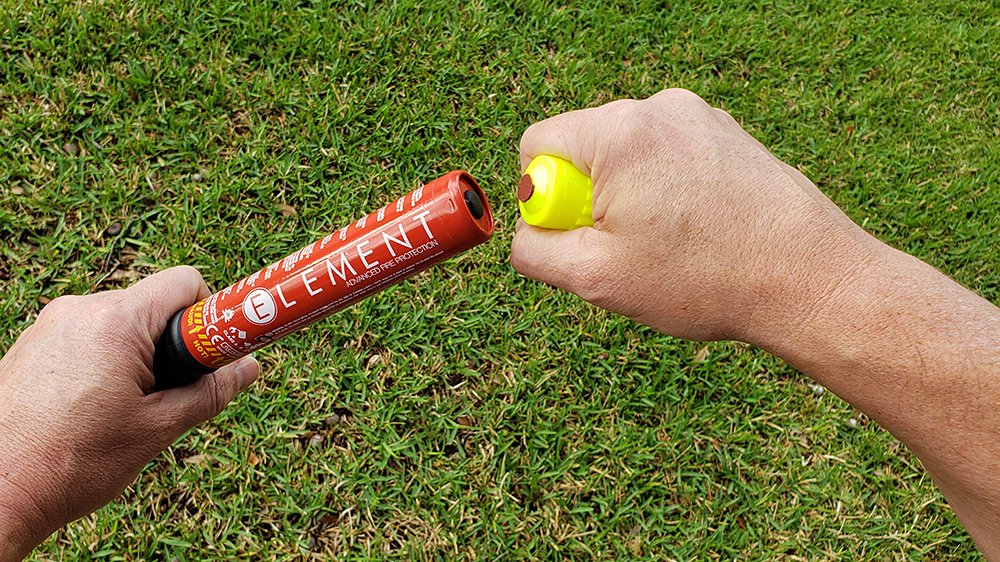 Step 4. Hold Handle & Point To Base of Fire

Hold from the black plastic handle and point the flowing gas to the base of the fire until extinguished.

Safety Note: When using an Element fire extinguisher, start the flow of gas from the extinguisher, then approach them from a distance. Slowly work around the first, directly the gas towards the center. The cloud of gas will cut off existing and new oxygen, extinguishing the fire, and preventing it from flaring up again.

How Do You Store It? 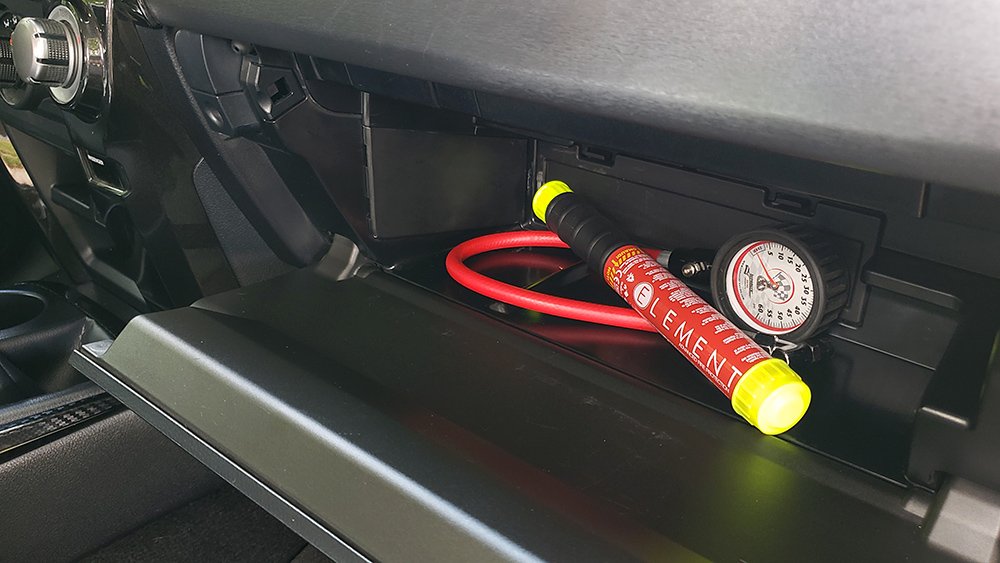 The compact size of Element fire extinguisher makes them easy to store and access. They can simply be inserted into the large pocket on the driver or passenger side door panel, dropped into the center console, or put into the glove compartment. 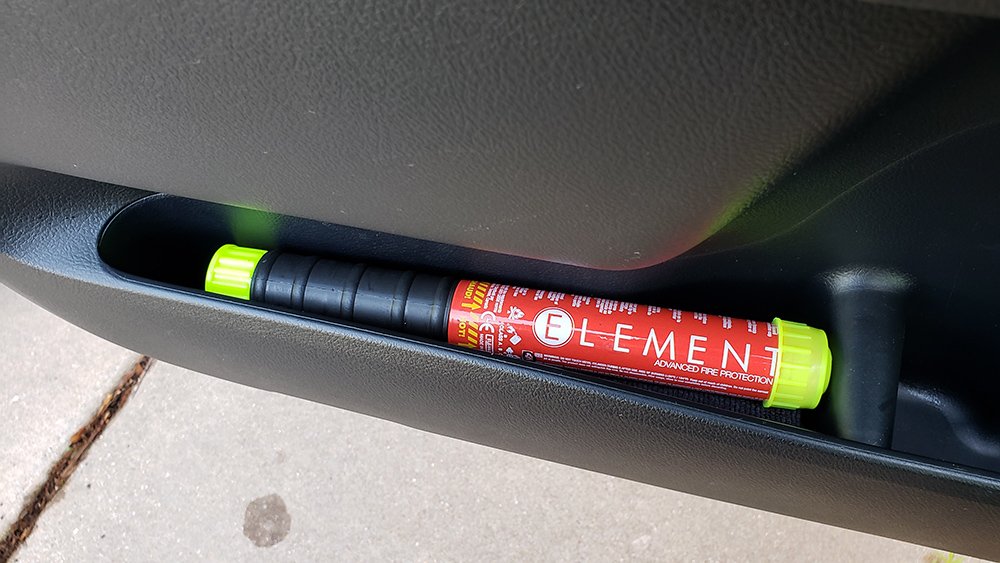 Use Included Clips To Mount It To Any Surface 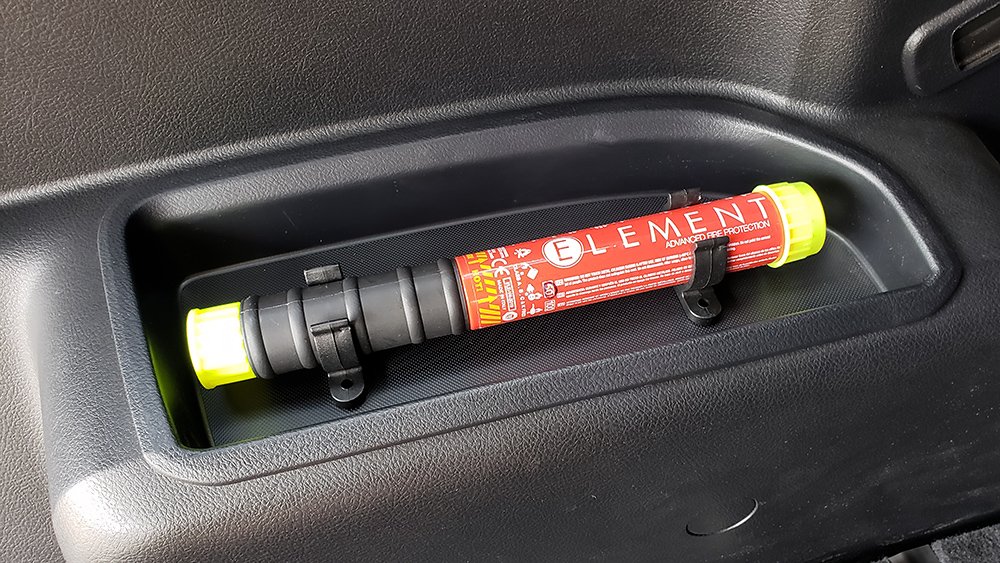 Each Element includes a single, plastic clip that has two holes in it, which allow for fastening it to any number of surfaces via screws or bolts.

Silver-plated finish with a strong magnet; mounts to many metallic surfaces. Check Price.

Laser-cut, CNC bent, powder-coated in red for durability and visibility, with stainless steel band clamps for a universal fit on various sizes of tubing. Check Price.

“The Bracketeer” under-seat mount allows for easy, yet securely mounting Element extinguishers in front or, or behind most vehicle seats. Check Price.

Hand-finished and polished carbon fiber, for the ultimate in looks and performance. Check Price.

Duplicate of the single clip that each Element extinguisher ships with. Extra clips can allow for mounting in different locations and vehicles. Check Price.

First time user quickly determines how to use an Element fire extinguisher, after only viewing the instructional images on the unit.

Putting Out a Car Engine Fire

An Element E50 extinguisher is used to put out an automobile engine fire as shown in the demonstration above.