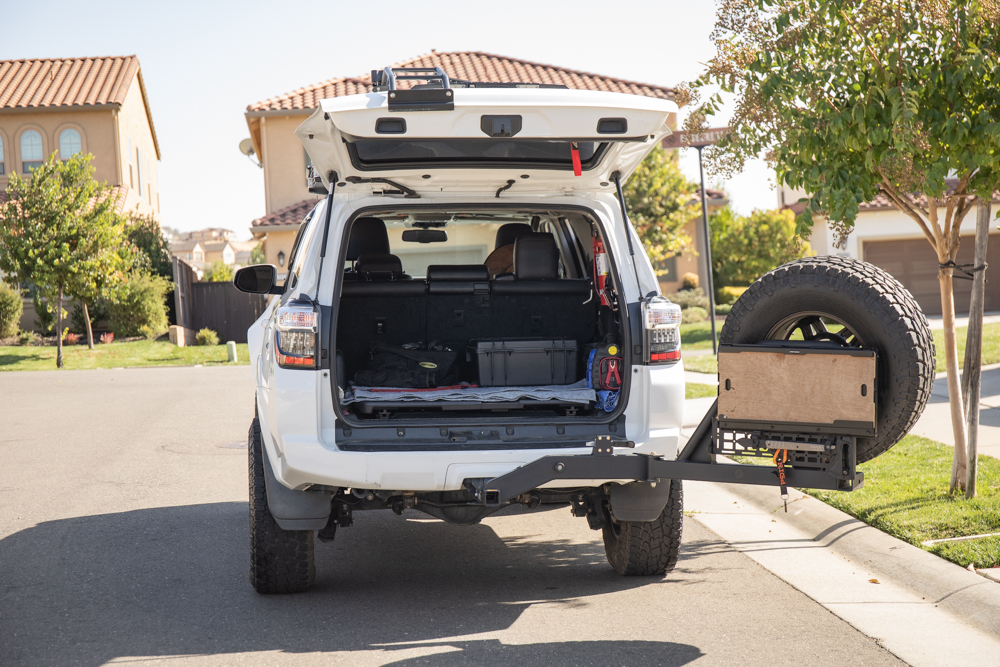 When you start adding weight to the rear hatch the factory struts can start sagging.

After adding accessories like a ladder, Rotopax fuel storage, secondary ladder steps, sound deadening, and other common weight-bearing items, your rear hatch may not fully extend any longer.

After your rear hatch starts to sag because of the extra weight, its time for a 4Runner liftgate strut upgrade.

There are a few places that offer upgraded rear liftgate struts including Amazon, Lift Supports Depot, CarID, and many others.

Lift Supports Depot actually sells a few different versions for the 4Runner so depending on how much weight you have will depend on which struts you buy. There are factory replacement struts and upgraded struts that will handle a Ladder and other accessories. 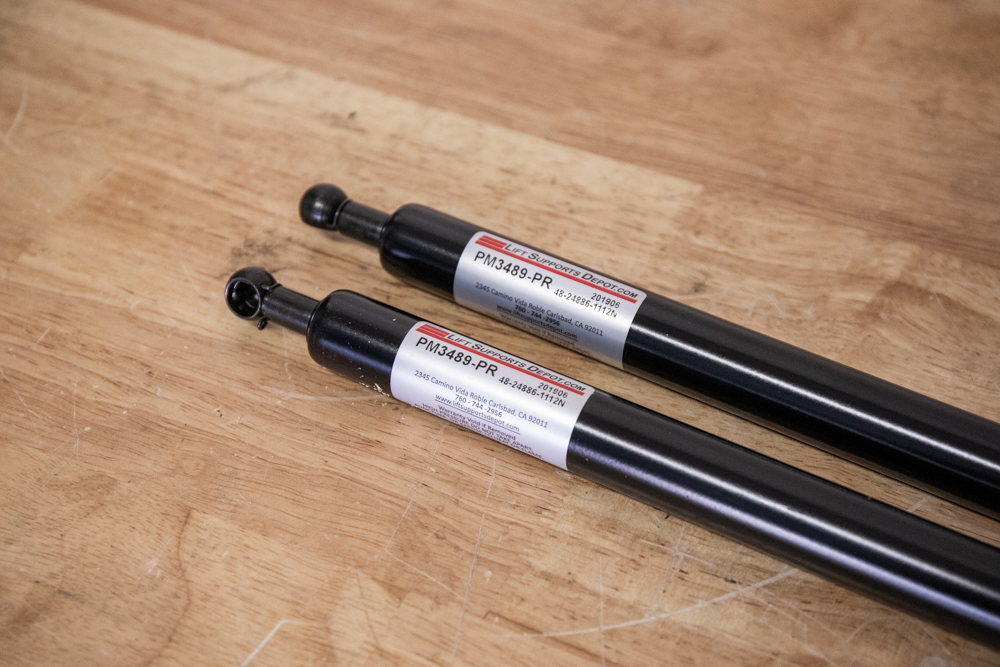 Just make sure the struts you buy will accommodate the weight you have on your hatch.

The HD (heavy duty) linked above comfortably accommodates any ladder (GOBI, Baja, C4, Etc) along with Overland Equipped secondary ladder steps and Rotopax mounts. If you add a single full Rotopax can, the liftgate still holds its place, however, if you add two full Rotopax cans, the liftgate will start to droop down.

The install is very simple.

Start off by removing the bands that hold the supports in place (top and bottom bands) with a small flat head screwdriver. Once both bands are removed, gently pull the support out. You must make sure that your liftgate is FULLY extended before pulling the factory strut off. If your strut is loaded with tension it fully extends once it pops off. This can result in damaging your rear tail light housing. Ask me how I know..

Once you have the liftgate struts off, install the new support in its place by pushing it into place.

It really is that simple, but I will drop the step by step below as well. 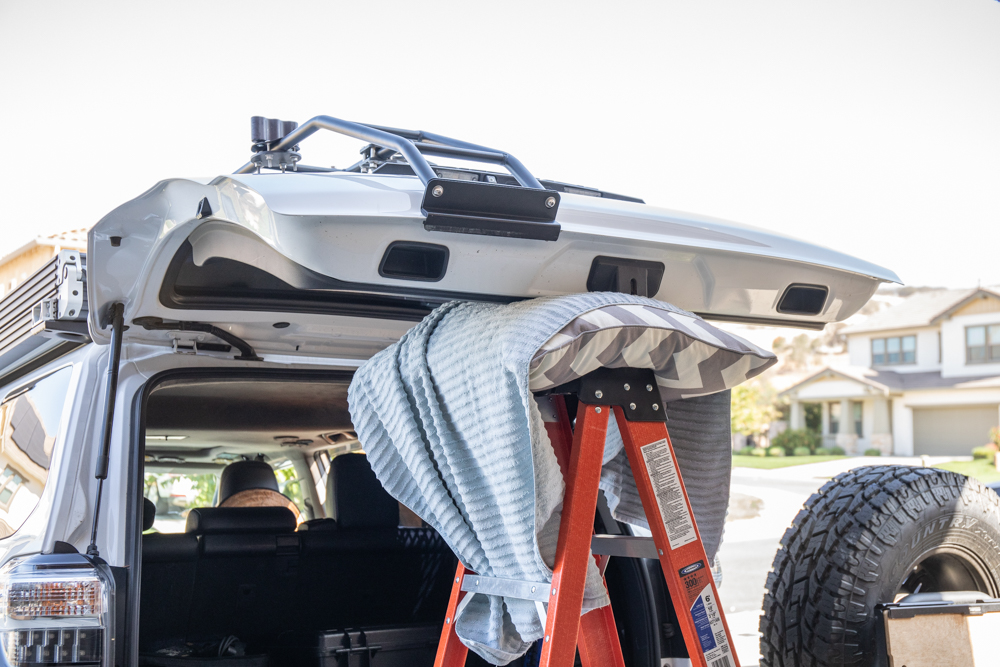 This is one of the most important parts of the install.

You want to fully support the liftgate before removing the struts. Having a helping hand is pretty important here. If you can have someone hold the liftgate fully extended, this will prevent the strut from fully extending once removed. You will see below why this is so important.

If you don’t have a helping hand, you do have another option. You can support the liftgate with a ladder and a pillow. Once you remove one side, the liftgate will rest on the supporting object, like a pillow, blanket, etc. 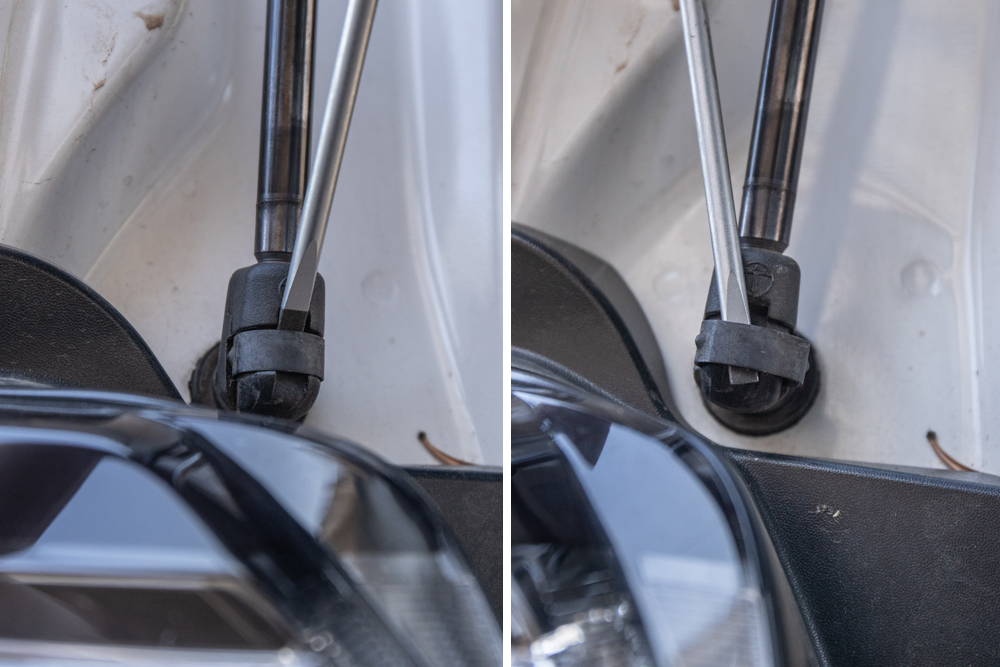 Using a small flathead screwdriver, slowly pop this C clip off. Use caution when removing this clamp. If you force the clip off too fast, you can shoot the clip outward which can potentially hurt you or someone around you.

Once you have both the bottom and top clips removed, you can proceed to remove the actual struts.

Start with the top-end first. Using some force, pull straight out on the liftgate strut. The strut should pop off and out of its socket. Once the top portion of the strut is off, you can simply pull the bottom end off using less force. 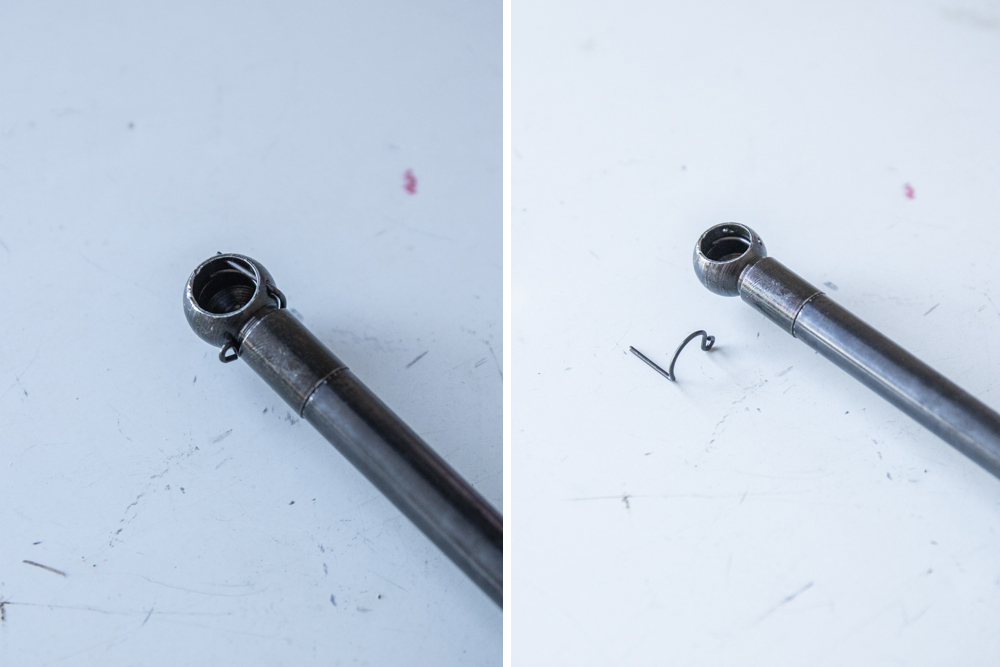 Remove this pin before installing new struts. If you fail to remove the pin/clip then the socket of the strut won’t fit onto the ball. 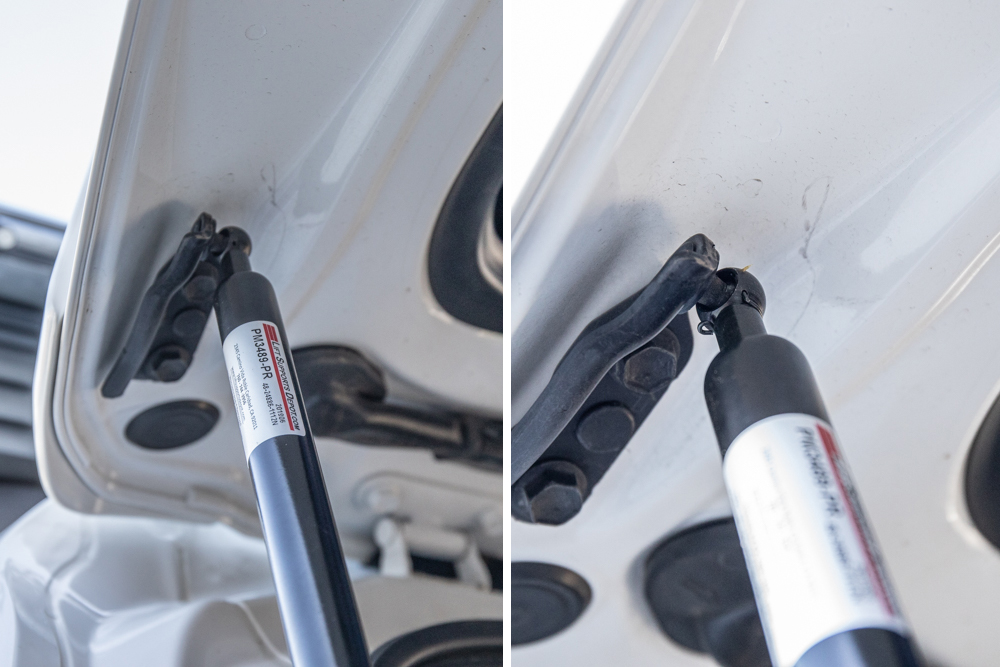 Place the strut socket on the ball of the liftgate. Once the socket is securely on the ball, proceed to attach the clip in place. 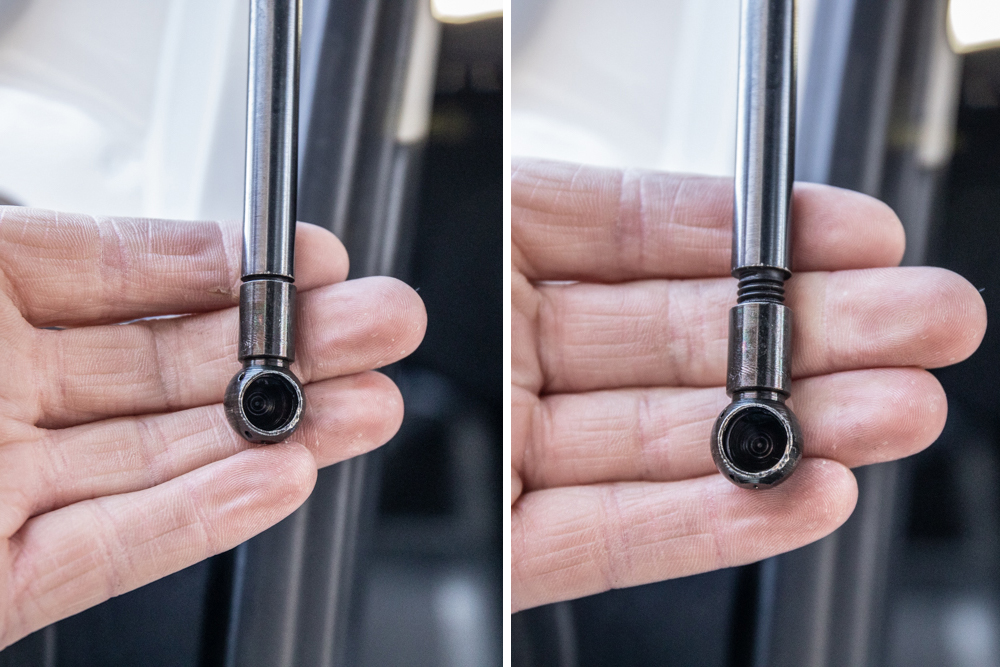 The bottom of the liftgate socket can twist in order to achieve proper orientation fitment. You may only need to twist slightly, and nowhere near as close as the picture on the right. This picture on the right is for reference that it “twists” only.

Top of Strut – Twist to Tighten 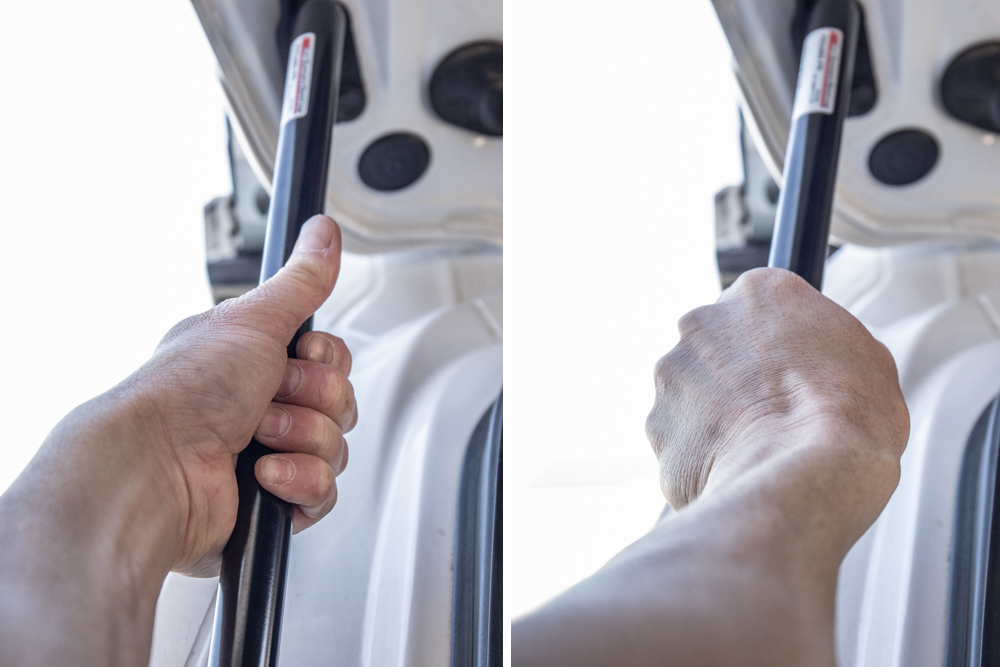 Once the top and bottom of strut sockets have been placed onto the balls, you can tighten the struts. Just twist. Pretty simple.

Remember to have Hatch FULLY SUPPORTED before removal 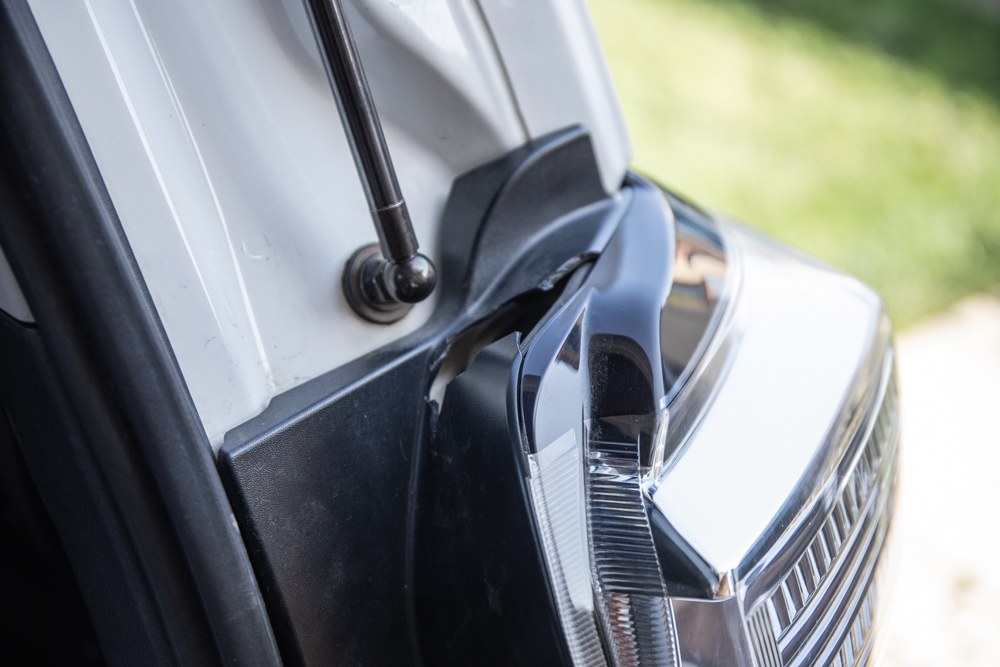 Here is what to watch out for.

If you remove the bottom end of the strut first – with the liftgate unsupported, you can risk having the strut fully extend into your tail light housing… pictured.

To prevent this, just remove the top end of the strut first or have a friend help you fully extend the liftgate struts while you are removing the bottom strut.

The bottom strut is just easier to reach but is clearly a bad idea. Pull the top of the strut off first.

Thankfully this inner black plastic spacer screws to the headlight housing, and is not part of the housing. A friend on the trail recently smashed his headlight housing and is sending me this one plastic piece.

This is what the liftgate looks like before the install. The liftgate will fall until it reaches it’s destination. 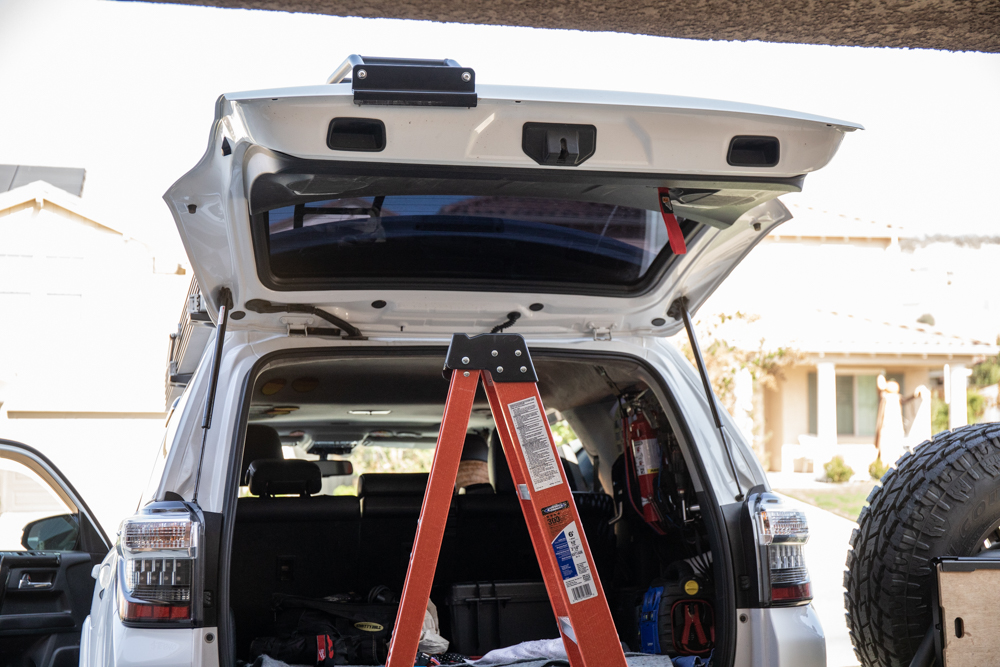 This is post-install. The rear liftgate is now self-supported on new struts. Man, I waited way too long to upgrade the struts.

If you guys have any questions, let me know. Pretty straight-forward install, though.

Just grab a friend to help you support the hatch.

brenan, whats your long term opinion of the upgraded struts? I see some complaining about failures.

Installed new struts on 19 pro nd they sound horrible not smooth at all. Tried lubing up with some Amsoil MP spray but that did nothin. Any suggestion?

Any idea where to find something similar for a 3rd gen ?

Gobi makes some struts as well to compensate for additional weight on the lift gate. Will take longer to get but may be better quality.

JFYI the 15% of 1-star reviews for the heavy duty struts include many customers whose struts failed within a year of install. A few of the failures involve the hatch falling while underneath. I have two toddlers who accompany me on road trips, and I’d rather have no ladder than the worry of this thing falling. Not sure what I’ll do yet, as I’ve got a C4 ladder on and was hoping to mod it up quite a bit, but not at the cost of failed struts.

What did you end up going with?

I can’t get mine to close. Stuck open

The Amazon link in this upgrade mod, has shown Sold Out for months now. Does anyone know where else I can get heavy duty replacement struts?
I’ve installed the Victory ladder with a shovel and the factory struts can’t handle it. I’ll be adding more so I need stronger struts.

So, we just got home with a 2020 nightshade and, I don’t need heavier struts. Can you adjust the height of the liftgate with the struts? Ours hits the garg=age door if you open it while inside the garage. I need to lower it about an inch. Thanks for any advice

Do you need to put the pins back in?

Installed the struts yesterday with little trouble. Great improvement!
Should have done it at the same time as the ladder

Curious if anyone has an option for a 2019 TRD OR? I checked the Lift Supports website & they don’t seem to make anything that goes past a 2018 4Runner. This has been on my upgrade list ever since I put a ladder & some rotopax cans on the hatch door. Thanks!

Yes! This was exactly what I needed to support my Baja ladder on my 2019 4Runner. Thank you so much for sharing these struts.

Kimber
I checked the Lift Supports website & they don’t seem to make anything that goes past a 2018 4Runner. I have a 2020 Did you get them somewhere else
Thanks John

I thought you had a power liftgate?

No, that may have been Ryan’s article you are thinking about?