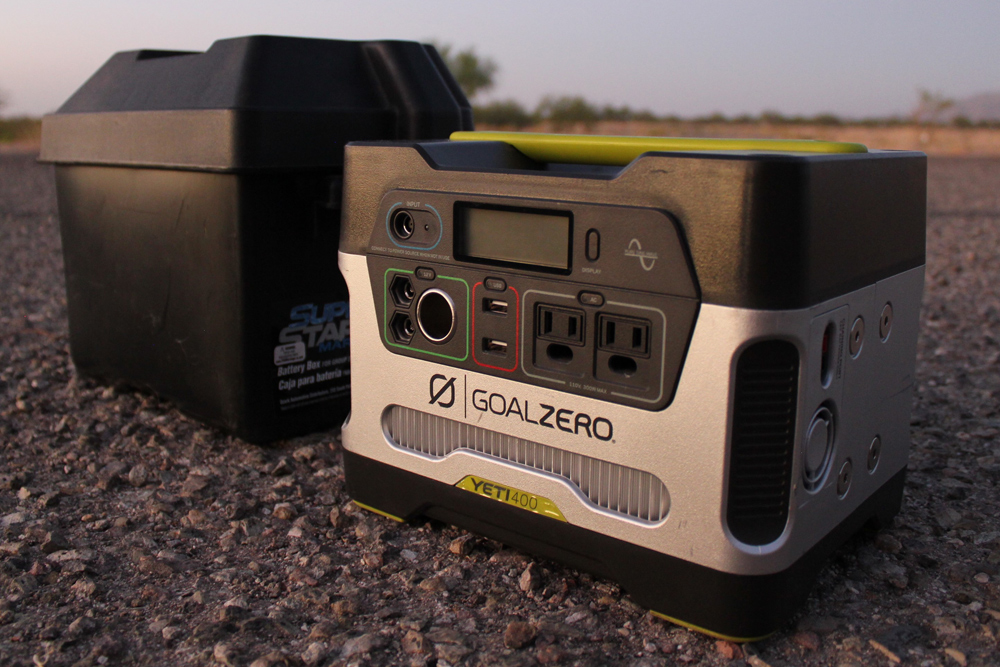 The modern vehicle-based adventurer is more technically laden than ever before and thus the need for more power is required.

I have already installed a Genesis Offroad Dual Battery set up to ensure that I have plenty of power for vehicle accessories and starting. However, there is the main flaw to the 4Runner’s electrical outputs and that is that the 4Runner must be running for the outlets to work.

This flaw could easily be overcome by adding a permanent hot outlet from the battery system to the rear.

However, I am holding off on this as I am searching for a drawer and storage system and don’t want to wire it all just to move it later… measure twice cut once, or I’m just lazy and don’t want to do more work than I have to (also called efficiency!).

For my needs, I wanted to have an adaptable portable system that on the low end could charge phones, tablets and provide lights for a week.

Then on the high end, I wanted it to do that plus be able to run my Dometic CFX75DZ for at least 2-3 days without the need for any charging.

Easy, right? …Oh, plus I didn’t want to spend a ton of money.

My first go to was Goal Zero, I have used their products in the military and outdoor industry and while their products are pricey they hold up and have great customer service.

After a phone call with one of their techs I disqualified the lithium generators as they do not allow for simultaneous DC input and output or in other words, it would not charge while being used.

So with that my first choice to meet my high needs was the Yeti 1250, however, at $1000 and 103 pounds it was neither affordable or super portable.

However, the Yeti 400s will easily handle my low-end usages but may last a day with my fridge.

While on one of many calls to Goal Zero, they did mention that they had a refurbished Yeti 400 at a discount and an idea that may fit my needs, so for around $350 and plan I pulled the trigger. 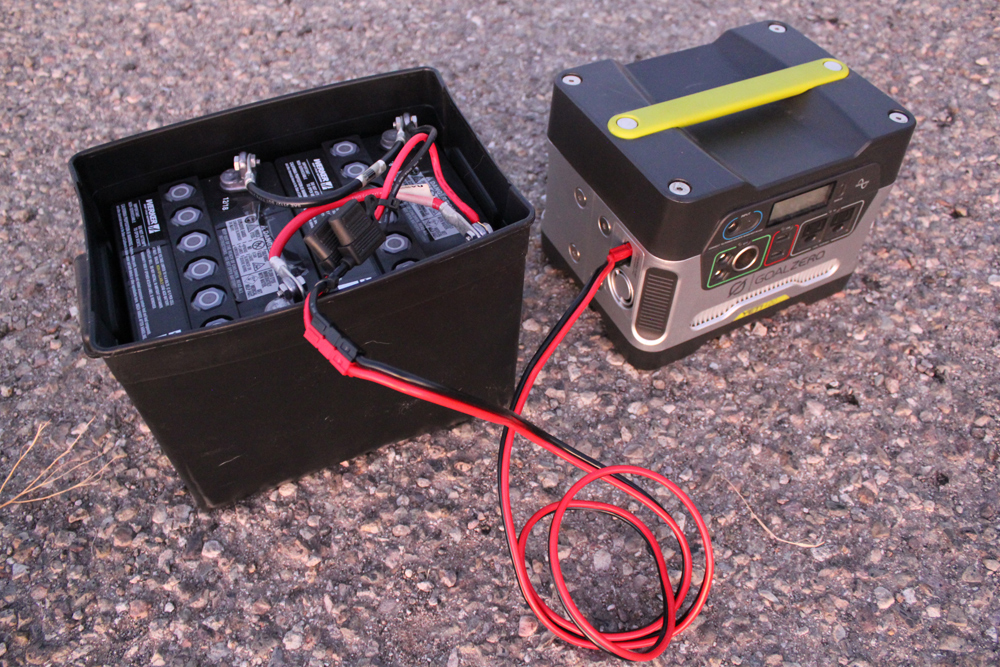 While the parts list may be lengthy, the build and principle are very easy.

The internal replaceable Goal Zero Battery is a 33 AH Battery. By chaining 2 more of the same 33AH Deep Cycle Batteries it allows them to give the Yeti 400 the same capacity as a Yeti 1200. By using the same size batteries this allows them evenly charge and discharge with straining the Yeti’s internal charging.

Note: Ensure that batteries are at the same level before charging or discharging. This may require a trickle charger. 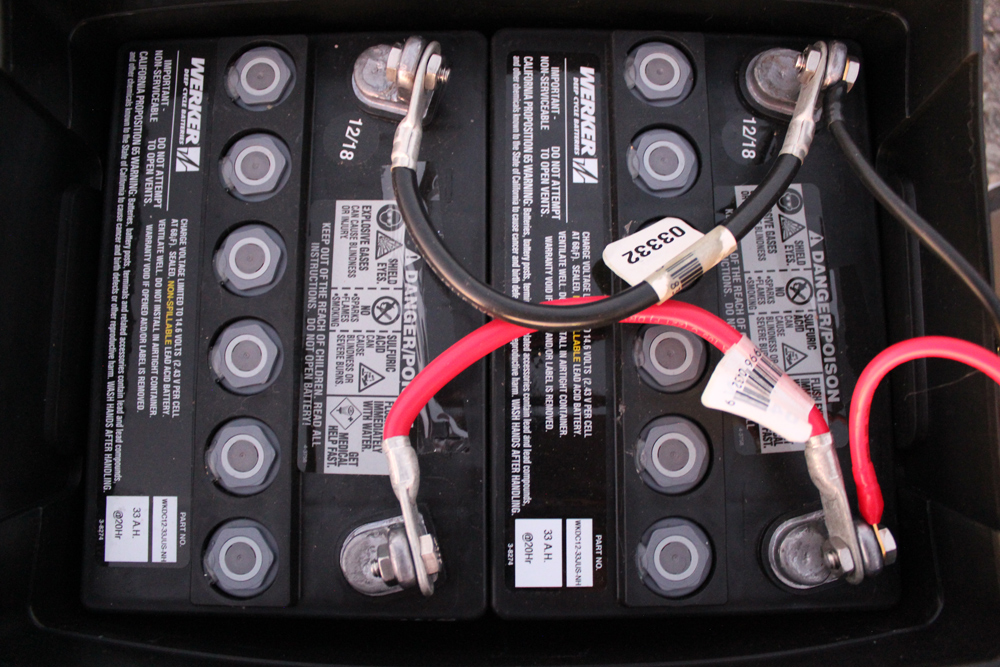 The Battery Cables connecting negative to negative (black) and positive to positive (red). 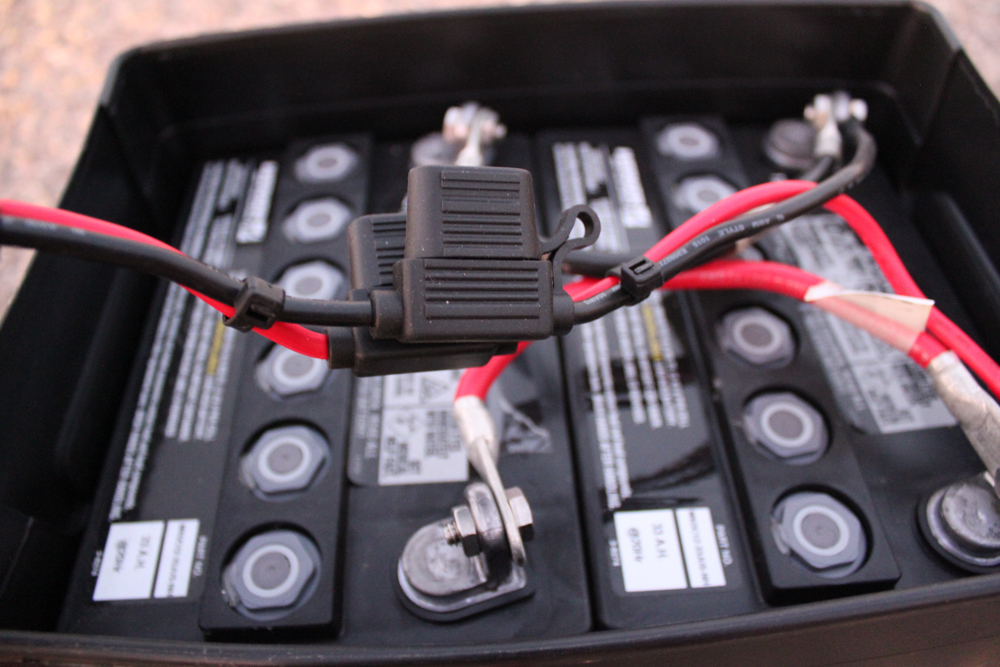 The dual fused Anderson connector then connects to one of the batteries’ positive and negative terminals. 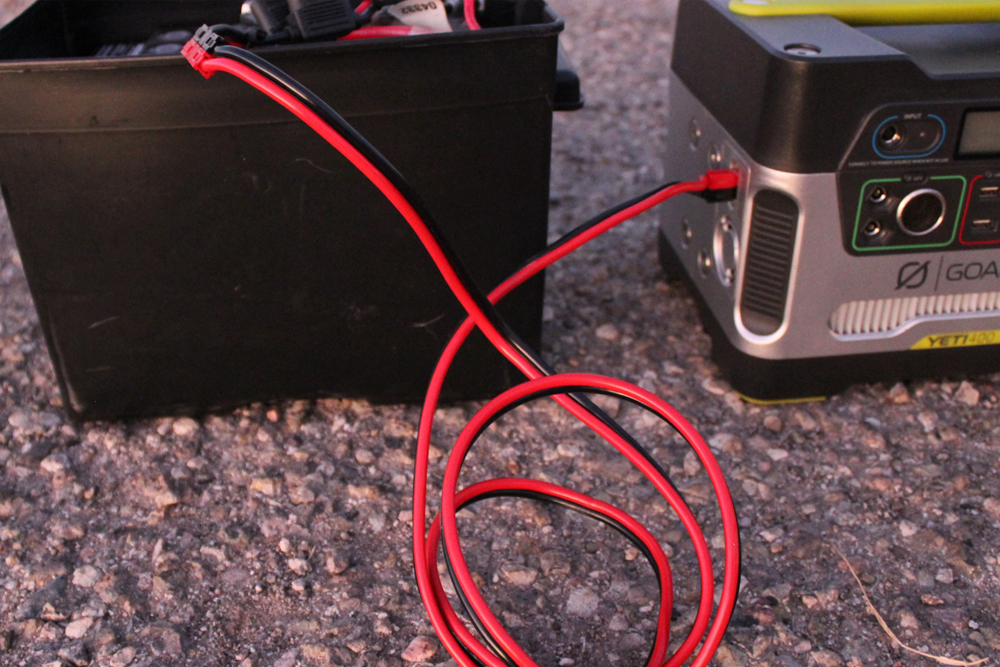 Then I connected the 5’ Anderson cable extension to allow me to remove the battery box.

This will allow me access to the Yeti 400 inputs and outputs without having the battery box in the way of more used items. 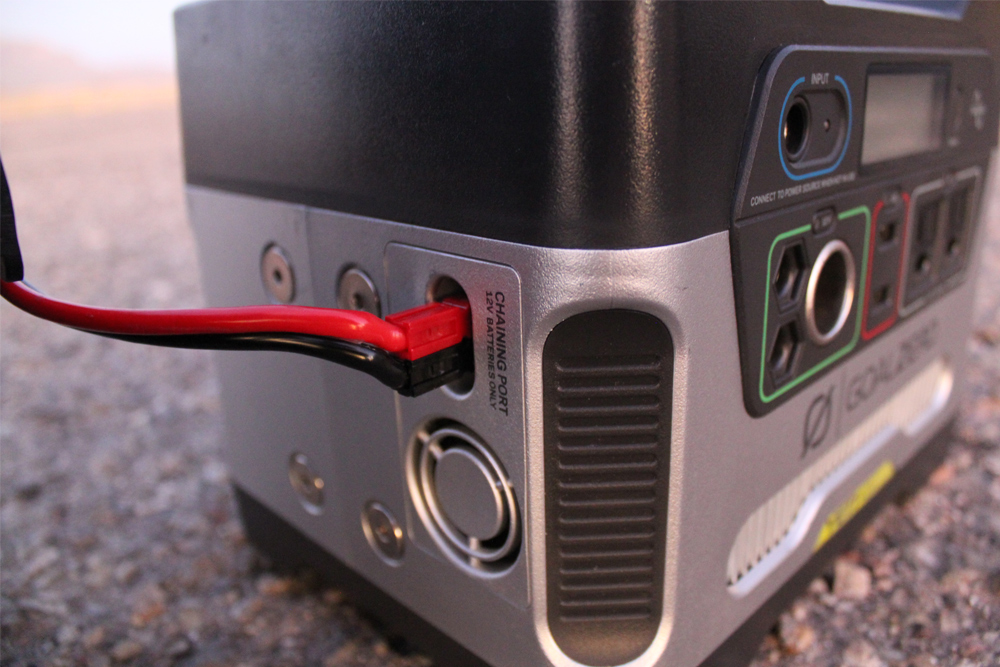 The Anderson cable can then be plugged into either side of the Yeti 400. 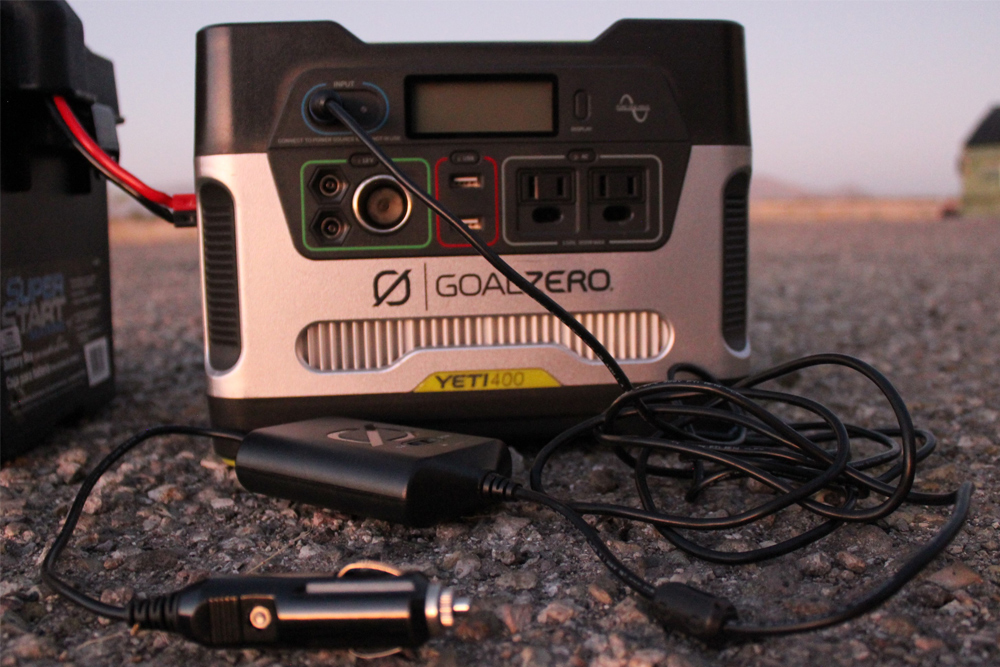 While just having the Yeti “1200”, as I have dubbed it, fulfills my original needs I wanted it to be even more adaptable and able to keep me in the backcountry longer.

The biggest challenge to living in Arizona is the heat. Higher temps will mean that the fridge has to work even harder, thus burning more battery.

Our first outing, with temps in the 90s, the system only lasted two days. Adding a solar panel was a no brainer as it allows us almost unlimited power.

While the Bolder 100 Briefcase is not as compact as the soft panel it is much more affordable.

So far we have spent one week in Arizona with the fridge running off the Yeti “1200” and solar and it never dipped below 80%.

Bolder 100 Briefcase is compact and is essentially two 50s hinged together. The stand is simple and sturdy and the extension cable can be placed inside to safe space.

For the cost, I wish the cover had some padding. To compensate, I added a thin foam packing wrap for protection. 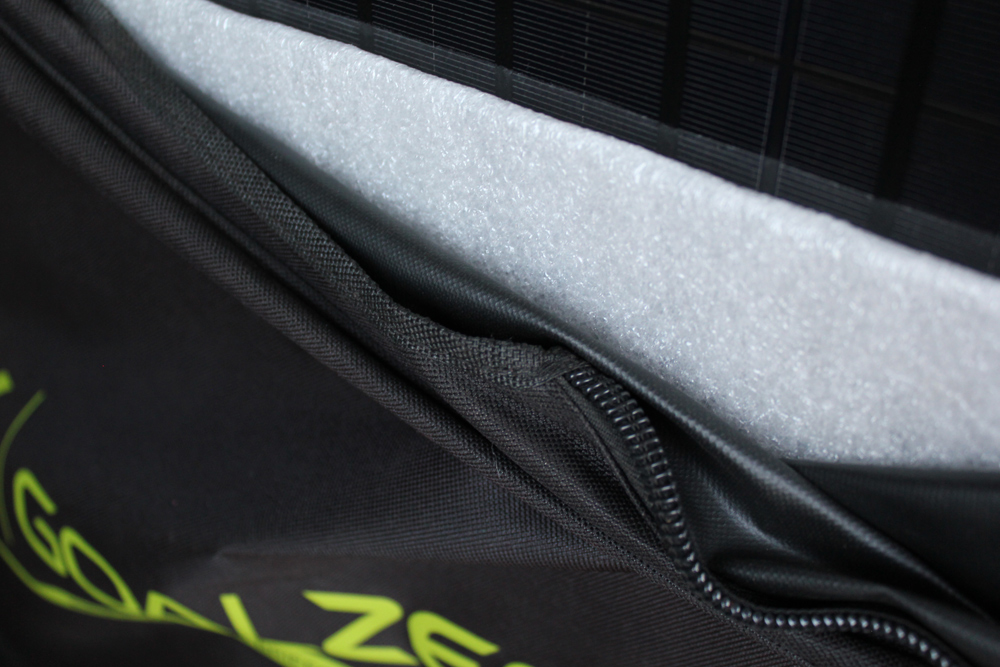 The next challenge is when you’re on the road constantly or in an area of low sun visibility.

On our trip to Washington over the summer, I pulled some long miles during the day and only stopped way into the night. Also, even when we were in camp and it was sunny the dense tree canopy only left slivers of light to chase with the solar panel and 30’ extension cable.

To overcome this challenge we only needed to get the Yeti Vehicle Charging Cable.

This allows the vehicle to charge the Yeti on the go or at least with the ignition in the ON position. There are two positions for either 5 or 10 AMP charging, however, even though the 10AMP would charge faster for some reason it will just stop while the 5AMP works consistently. 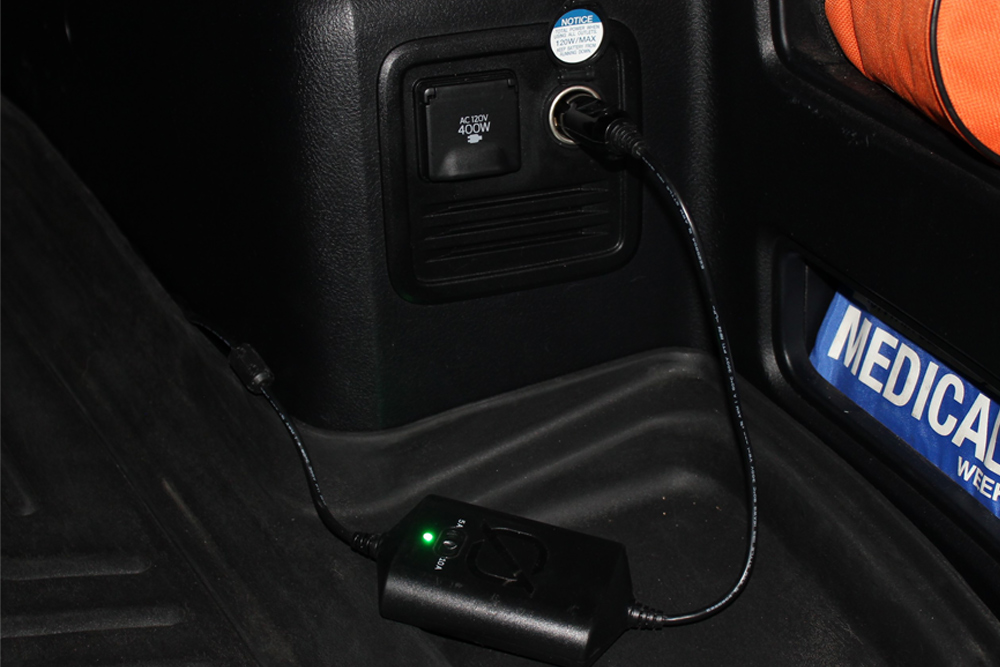 Plugging into the factory outlet and running the cable under the cargo mat keeps the cord protected. 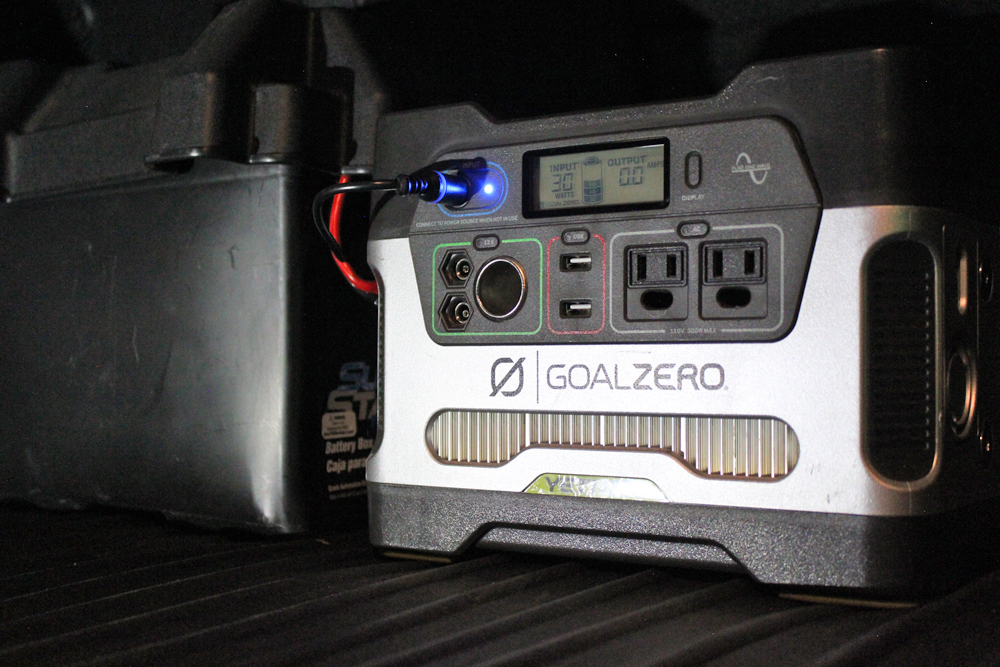 An unexpected problem was that the Dometic Fridge didn’t work when plugged directly into the Yeti cigarette output.

Another call to Goal Zero and they sent out a 6mm to cigarette adapter for free and that did the trick. Not sure why but the output works for other accessories that I have used. 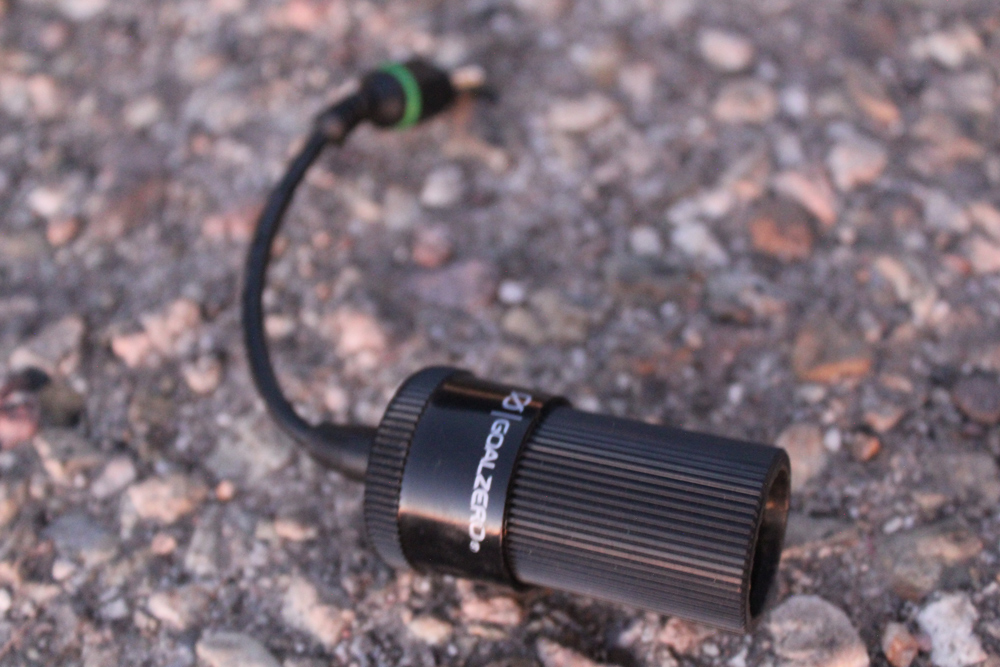 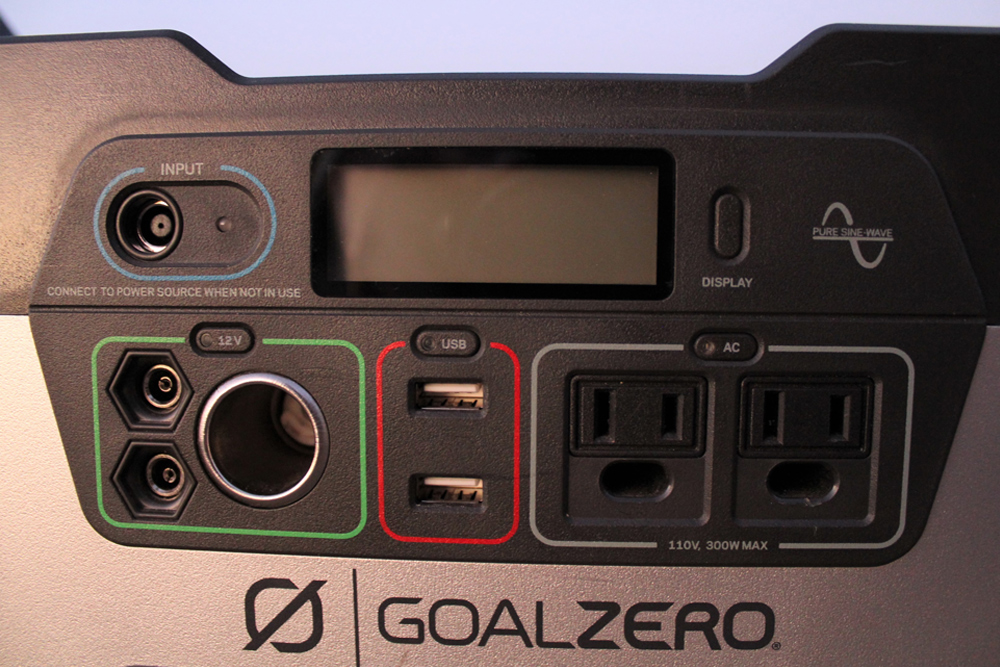 Trying to discharge the Yeti “1200” in this system configuration is near impossible.

In one night we have charged:

On a similar night, where we had to get on the road the next morning, the car charger had it back to 100% by the time we set up camp that night which was approximately 6 hours of driving. I stay away from using the AC output as the conversion is an unnecessary drain on power, but sometimes the laptop needs what the laptop needs! 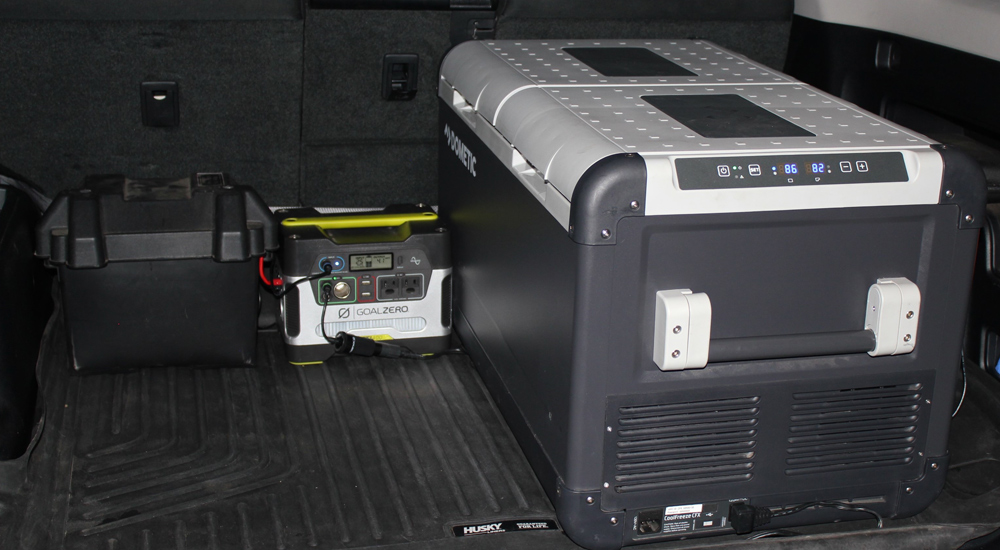 The Yeti 400 weighs in at 29 pounds and the additional batteries weigh in at 23 pounds each, bringing the total weight to 75 pounds.

Actually the Bolder 100 Briefcase is 25 pounds so the entire Solar Generator and Panels weigh 100 pounds. The Yeti 1250 also is $100. This system at full retail is around $900 and includes the Solar Panel!

So not only is this a cost and weight savings it also adds more versatility and adaptability. I don’t always need the full capacity of the Yeti 1200. By disconnecting the battery box I am lighter and more portable, but its always there when I need it.