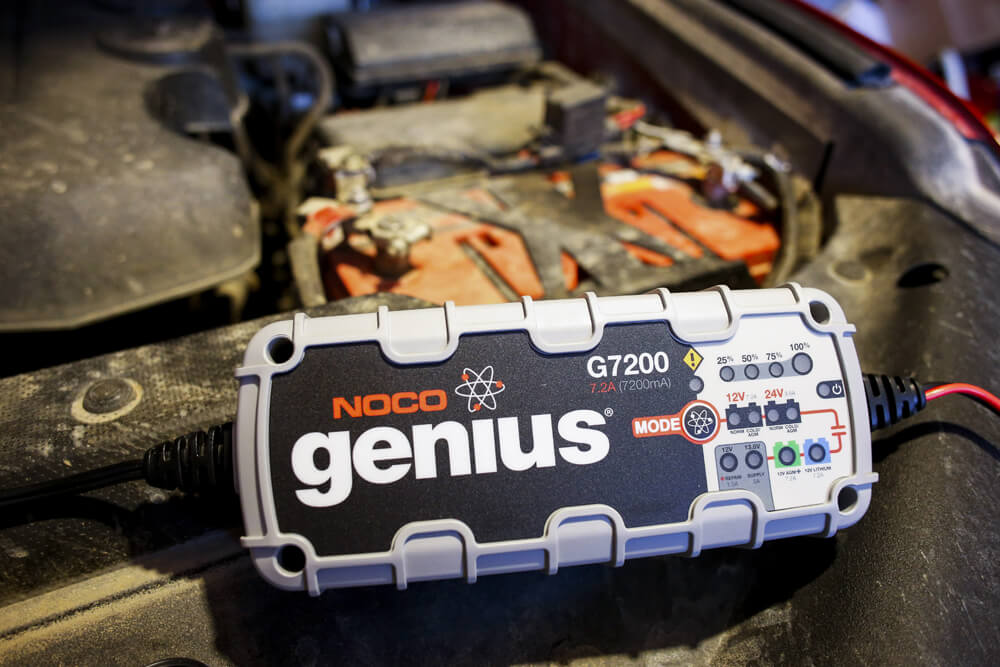 Have a deep cycle battery to handle loads of power your lights, winch, fridge, and other accessories draw? How about something to charge that battery?

Odds are you may have skipped that important step, or haven’t even thought of the importance of having something to charge the battery before going to a Group 31 battery.

While most skip the ability to keep their battery topped off, in the end, it will ultimately cost them big bucks.

The average Group 31 battery runs $400, meaning you may spend even more. The Odyssey PC-2150 in my 4Runner runs over $500 in a lot of places, and the PC-2150 happens to be one of the favorite Group 31 batteries used for single battery setups.

There are other options on the market, such as solar charging, trickle chargers, and voltage boosters.

Where to Find Products:

The issue with a lot of solar and trickle chargers is that they actually will overcharge the batteries resulting in them dying prematurely; one of the last things you want after dropping over $400 on one.

The voltage booster for the 4Runner is a good way to keep the battery receiving higher charge levels than what the OEM alternator puts out, but over time cannot handle keeping the battery topped off.

A battery charger can bring your battery back to full charge, in a safe manner.

Much like the solar and trickle chargers, you need to be careful of ones on the market as some have a habit of overcharging.

But when sticking to companies that have been around for a while, you are usually safe–especially if going with one made by your battery manufacturer. 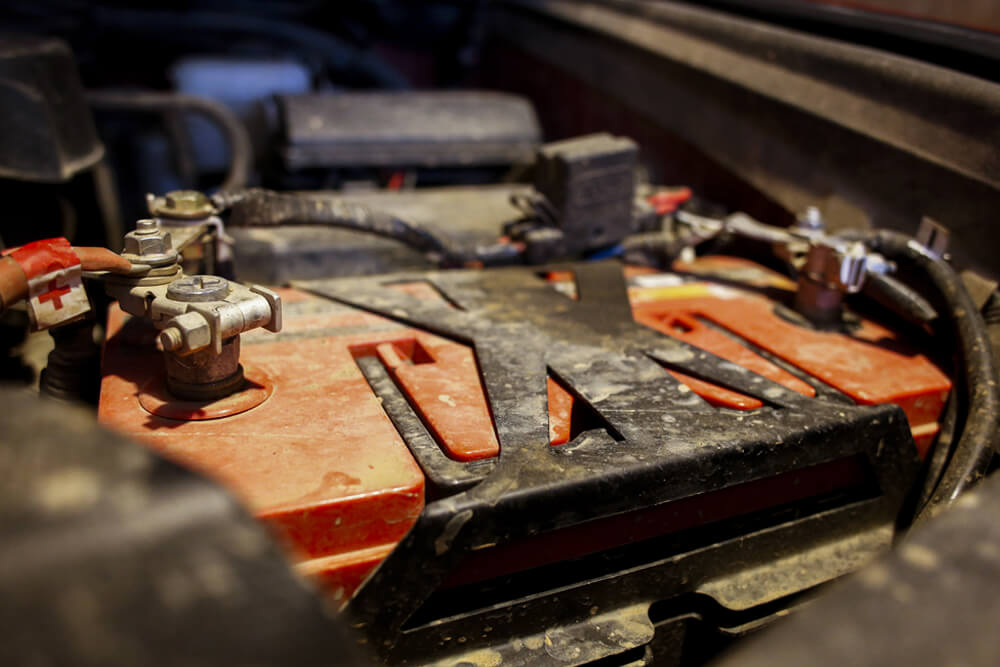 Pros to the NOCO Battery Charger:

After hours of research, I went with a NOCO G7200.

NOCO has a pretty solid reputation in many automotive circles and this is not their first appearance on the blog. Recently Frank did a review on their GB40 battery jump, which many people seem to be very happy with.

The NOCO G7200 has multiple modes to choose from:

So which one do you use? When do you use it? Let’s look a little closer into it. 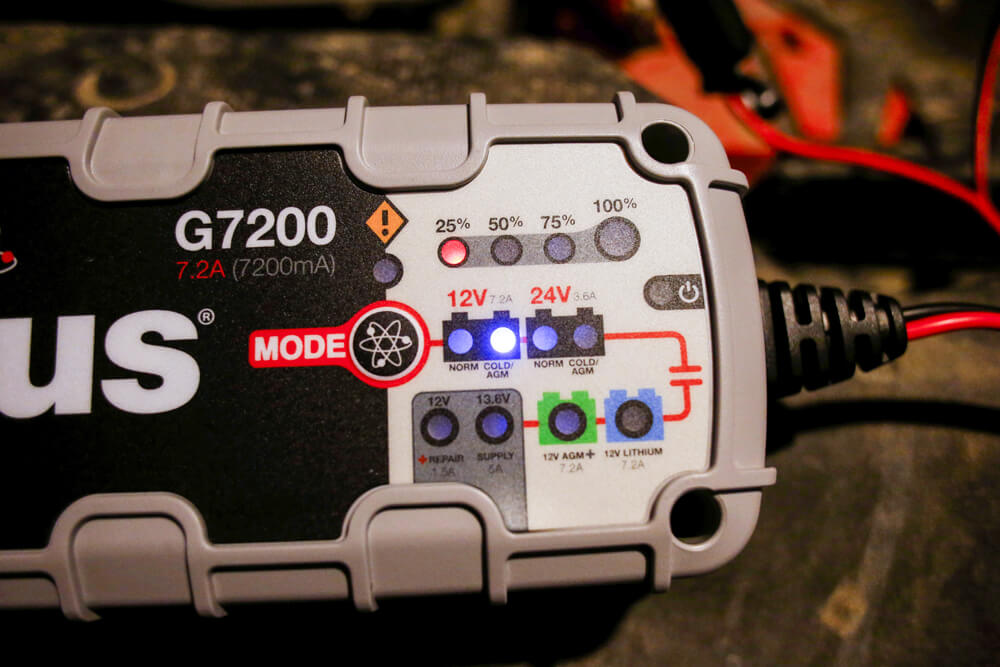 12V Normal and 24V Normal are for your standard battery setups.

The 12V Cold/AGM and 24V Cold/AGM are for both standard and AGM battery uses.

The only time you would want to use this with a 12V non-AGM application, is when you are in cold climates year round, or during the winter time.

Both of these areas should be below 50 degrees. If you have a standard AGM battery, which is more than likely what you are running in your 4Runner (be sure to check), you will want to use the 12V Cold/AGM mode.

Unless, of course, you have a dual AGM setup, then run the 24V Cold/AGM (same applies for dual regular batteries in cold climates).

12V Repair is for the regular style batteries such as those that come with the Toyota 4Runner stock and will be used when the battery is almost completely dead.

Contrary to NOCO’s statement of “recharge completely dead batteries,” there must be some charge left in order for the battery to be attempted to be brought back to life.

13.6V Supply is for converting to DC power, such as if you want to run a tire inflator or anything else that runs 12VDC. 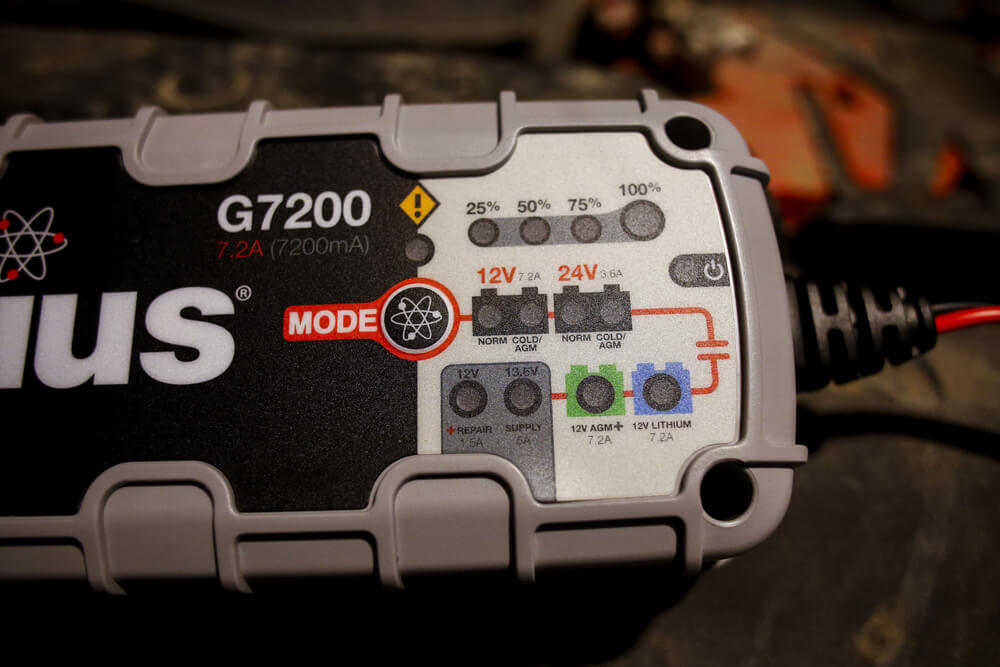 The 12V AGM+ is the one to pay attention to.

Doing so on a Group 31 AGM battery will result in what most trickle chargers will do, overcharging the battery and causing them to prematurely fail.

12V Lithium is for batteries that are similar to the AGM batteries but are made up differently.

A lot of these are used as replacements for the AGM batteries as there are some advantages to them. The difference, however, is they cost nearly 3x more than the $400 AGM batteries.

How to Set Up NOCO Battery Charger 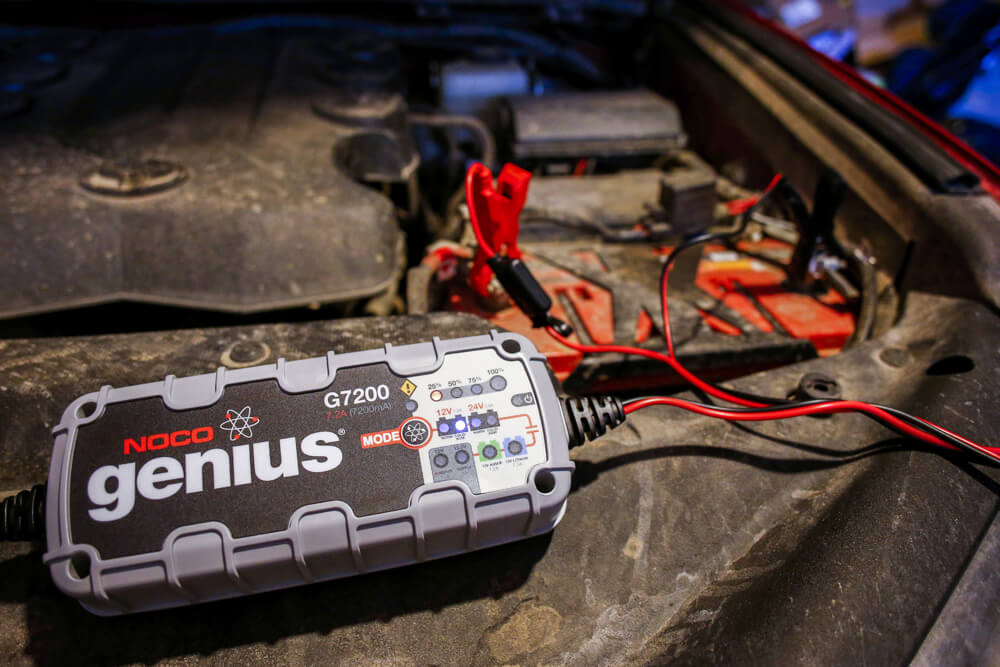 So how does it work?

The operation is pretty much dummy proof. As long as you follow directions nothing can go wrong.

As mentioned above there are multiple safety features built in to prevent overcharging, using in wrong applications, and causing fires.

First, you want to connect the cables to the battery with the correct coordination.

Typically power is on the left and negative is on the right. However, some batteries are flipped so be sure to check before doing so.

Normally the positive (red) stud will have a + sign on it so you know it is positive.

After the cables are both on their respective studs, you will then want to plug the NOCO G7200 into the wall outlet.

It will automatically start in standby until you choose the mode to put it in.

To choose the mode you want, simply click the “mode” button until the light illuminates in the correct circle for your application.

After waiting a few seconds the 25% light should begin to blink and will continue to progress to 100%. Once the 100% is solid green the battery process is complete.

Depending on where your battery is at, this can take anywhere from an hour to over eight hours.

My battery was reading 13.5 through the sPod, but to double check, I used a voltmeter on the battery studs themselves and got the same reading.

Each battery is different and normally will tell you on the battery somewhere (or in the manual) what your battery should charge at during cycle and float. 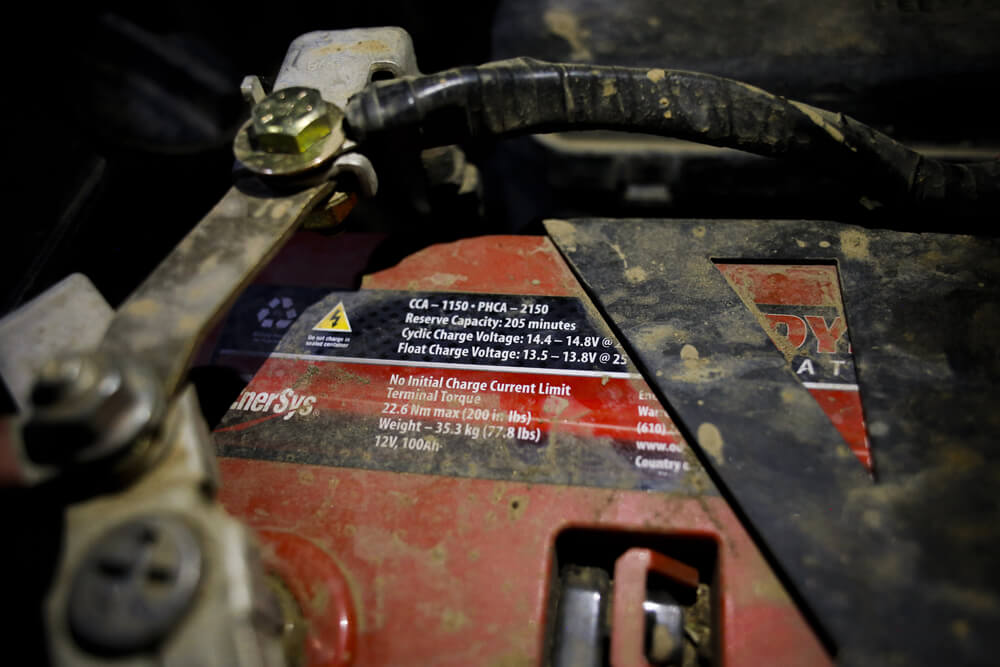 My battery has thankfully been well-taken care of–thanks to the ArcLightLED Voltage Booster.

However, over time, it had lost charge and needed to be brought back to normal levels before causing issues that cause premature battery failure.

I was technically .1 off from normal, but due to my batteries age and use, I find that to be extremely well.

Keep in mind AGM batteries typically last three to five years, but with proper maintenance can exceed that. 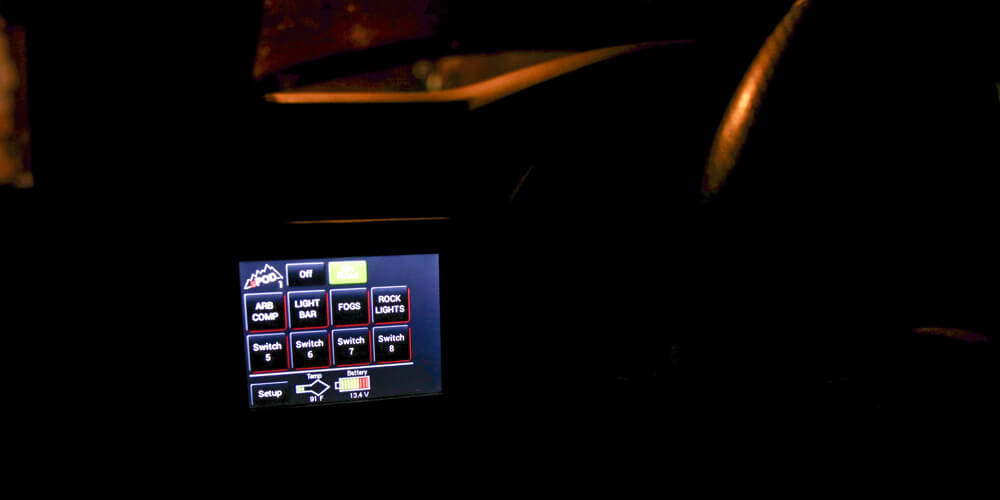 At the end of the day you can charge your battery anyway you want, but it’s important to make sure it’s being charged at the correct voltage, while also not being overcharged completely.

For the price, the NOCO G7200 is hard to beat and is one that I highly recommend to keep those expensive batteries we all rely on ready to go out on the trail.

I have the noco g7200. Charged one battery and now can only go from standby to 13.6 volt power supply
Any ideas what to do??

Hi,
I just wanted to clarify for any other readers. The 24 volt function is only for 24-volt systems (things like bulldozers and other construction and military equipment, primarily). In this situation, you generally have two 12-volt batteries wired in SERIES (positive to negative). (12+12=24). Using the 24-volt setting on a 12-volt system like our 4Runners (or any car, suv, or truck) will result in the batteries boiling, possibly exploding. (!!!)

This is different from a two-battery setup that you might have in a 4Runner, where the batteries are wired in PARALLEL (positive to positive, common ground). This maintains 12-volts, but combines the amp/hour capacity of both batteries.

Everything else above is correct. AGM batteries rock, this charger rocks, which it should for the price, and I would buy it again if I had to.