The ARCLightLED Voltage Booster for the 5th Gen 4Runner 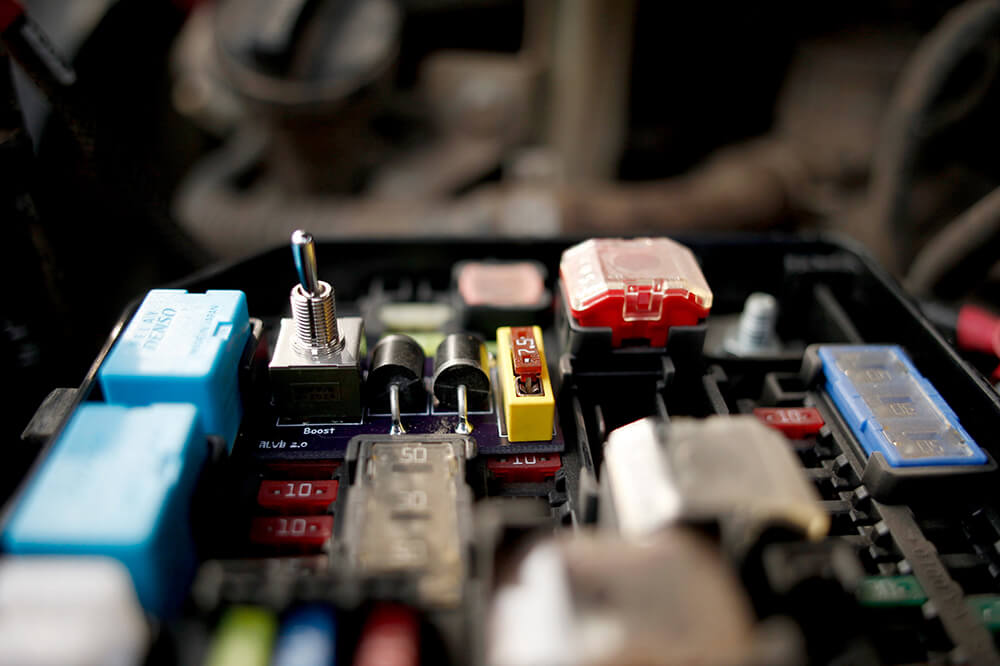 What is a Voltage Booster and Where/How do you install one on the 4Runner?

When it comes to AGM battery upgrades for your 4Runner, one thing you may be forgetting is how you are going to recharge your battery.

While there are multiple ways to do this, such as with a solar panel kit, wall chargers, and more. There is however another way to help keep your battery topped off, and that’s with a voltage booster for your alternator.

While some argue this can cause excessive wear and tear on your OEM alternator unit, there has been nothing to suggest that is done. In fact, the many people running voltage adapters have said they have had no negative impacts on their stock unit.

What is a voltage booster? 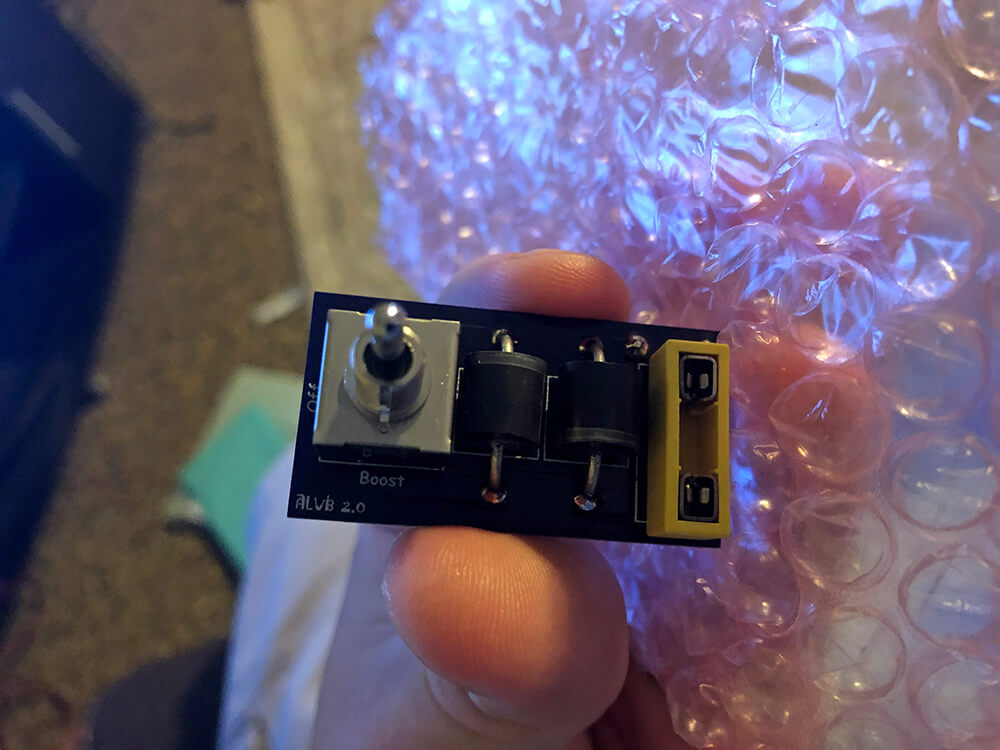 A voltage booster helps keep AGM batteries topped off by ‘boosting’ the voltage output from a stock alternator. AGM batteries require 14-14.7 volts to ensure the battery is properly charged.

When this does not happen the battery loses the ability to top off over time, and eventually fails sooner than it should. For batteries that typically run near $500, you obviously don’t want them to fail.

Is the voltage booster necessary?

You can also upgrade to a higher output alternator for a much larger cost. However, if you do not, then it’s a very wise purchase as it’s cheap insurance and can help prolong your battery life.

What kind of battery do I need?

You will need some sort of AGM battery, such as ones produced by companies like Odyssey, Optima, and Northstar. You do not need to use a voltage booster for OEM batteries as the OEM alternator can put out enough volts to keep those batteries charged.

There are three options with the voltage booster

Shut off your vehicle and open fuse box 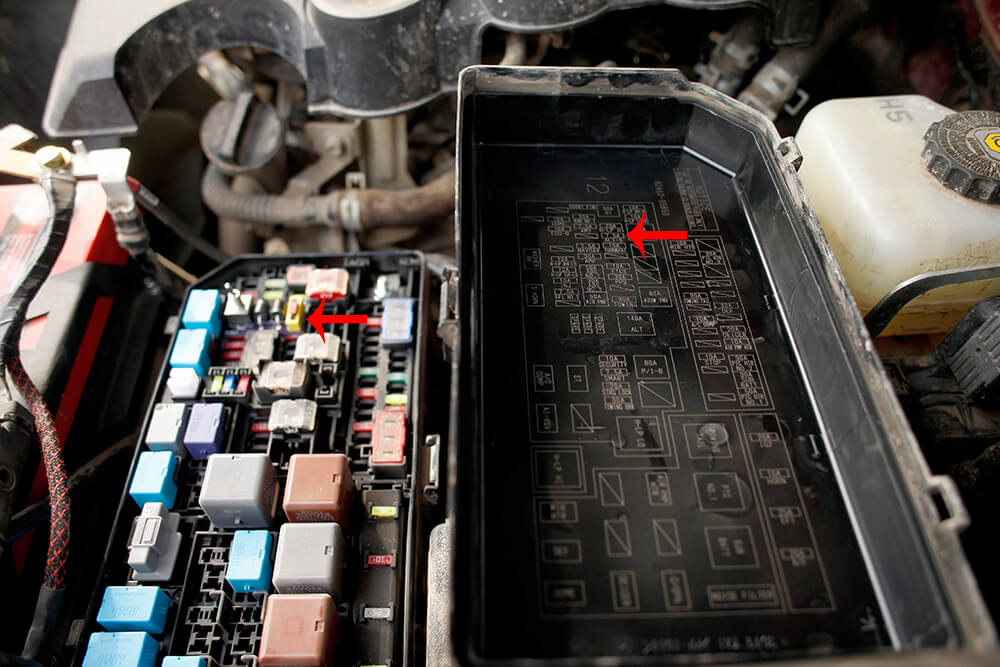 To install you want to begin by turning your vehicle off. Next, you will want to open the fuse box which sits directly behind the battery. If you have an sPod or air setup, you may have installed some sort of box on top of this panel. 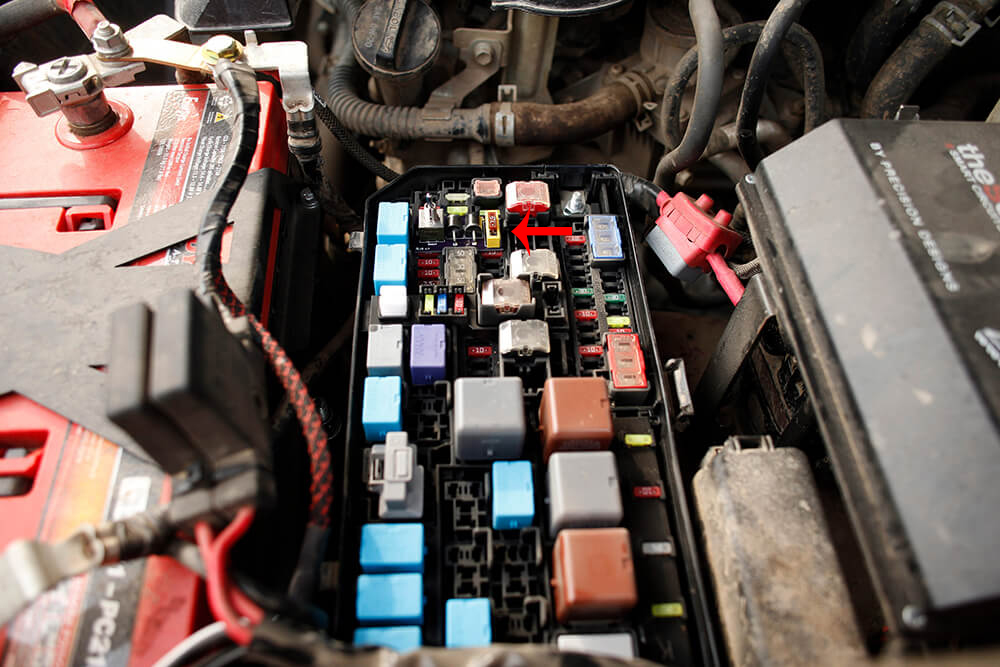 Once removed you want to locate the 7.5A ALT-S fuse. If you are unfamiliar with the layout of the fusebox, you can look on the underneath section of the top that you removed. Underneath you will find a diagram that will tell you which fuse is what. Look for the 7.5A ALT-S fuse and remove it. 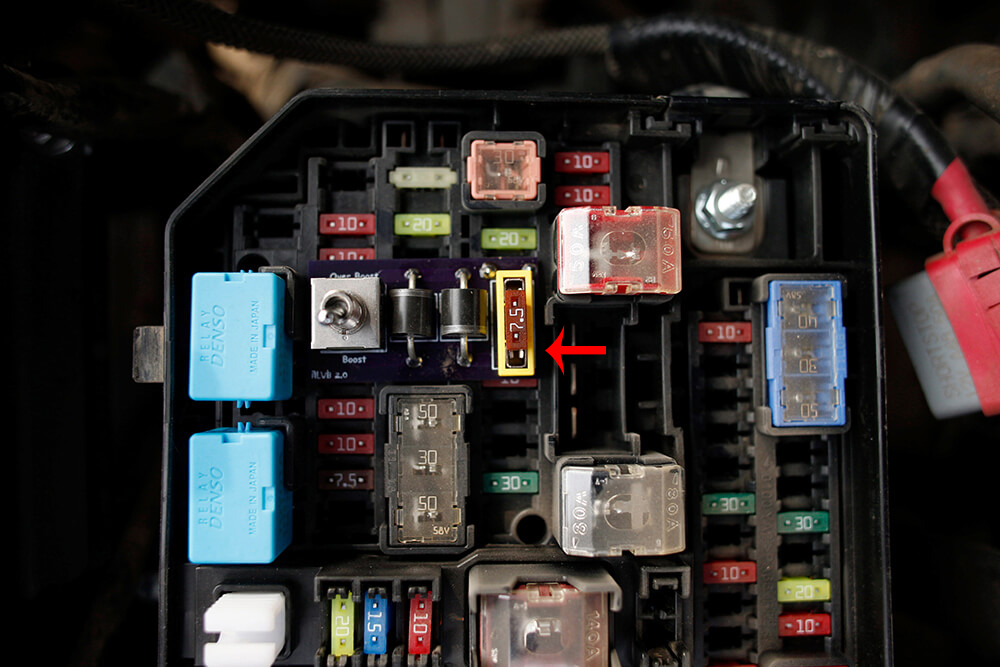 Once removed, you will want to place the 7.5A ALT-S fuse into the triple state voltage booster fuse spot. Being OCD, I decided to go ahead and replace the 7.5 fuse with a 10. This is not required and not necessary, but rather a personal choice.

Over boost or boost 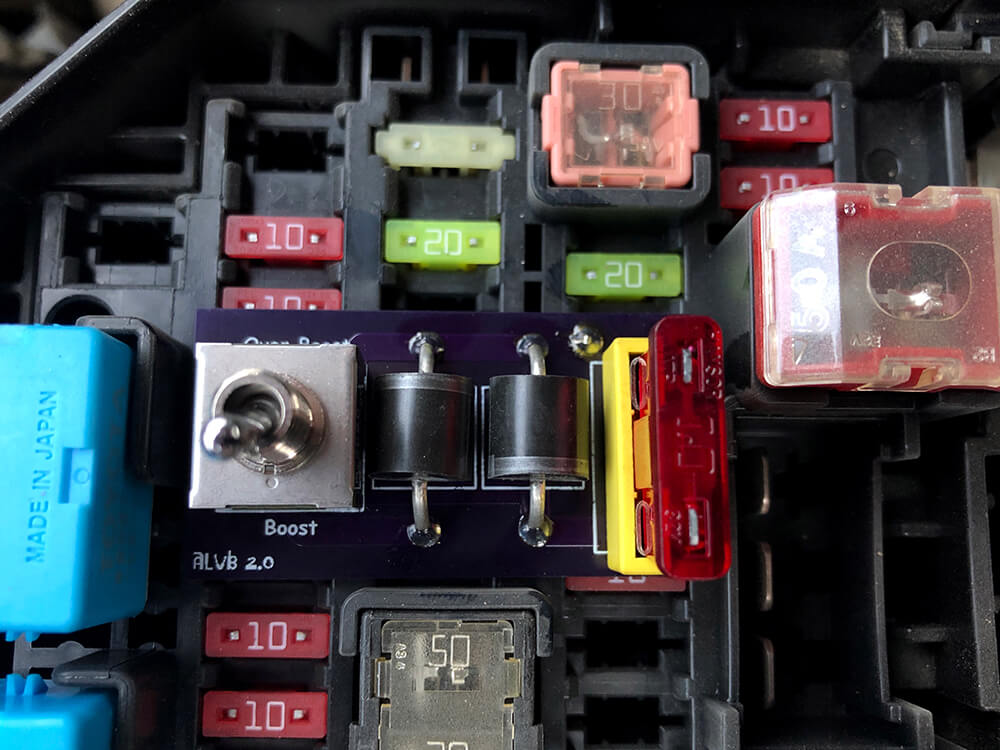 It’s then up to you to decide what voltage boost you want to choose — over boost or boost. It’s important to remember that you should only change this setting while the vehicle is turned off, not running.

Once you have decided what setting you want, put the top section back on the fuse back and never worry about it again, unless you need to change it for cold weather.

Before the ARCLightLED Battery Voltage Booster 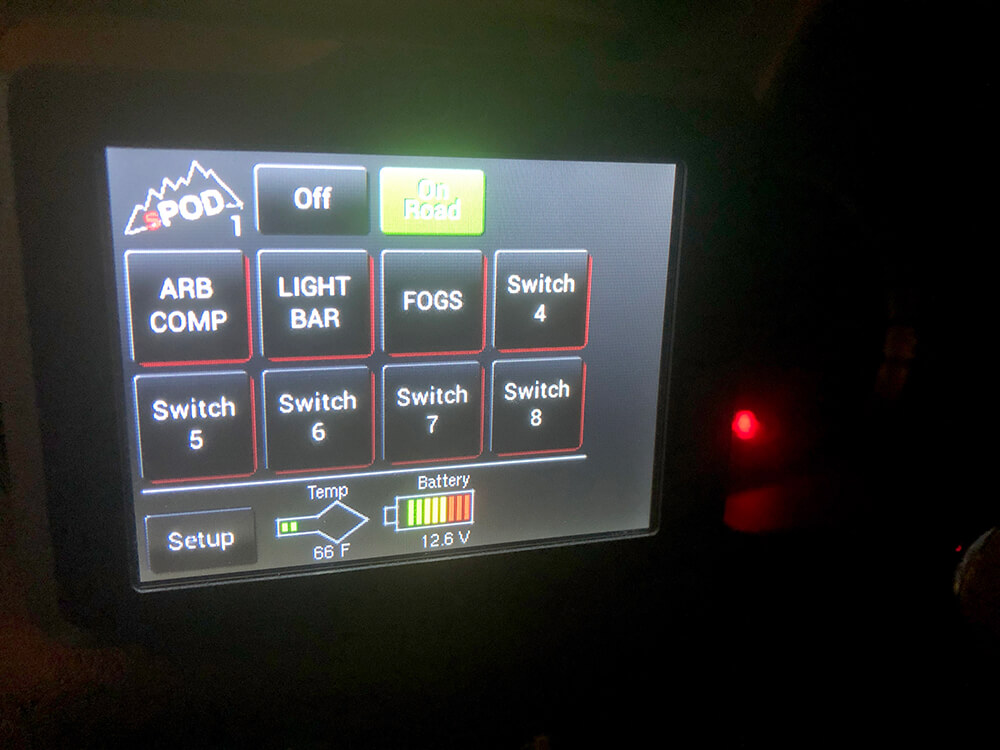 The main reason the ARCLightLED’s triple state voltage booster was purchased was that my battery voltage had dropped to 12.8 after quite a few trips to the Sierra Nevada while using my SnoMaster fridge, along with ExtremeLED light bar and Baja Designs Squadron Pro fog lights.

After Driving with ARCLightLED Voltage Booster (Charged to 13.5 volts)

After approximately 45 minutes of driving with the voltage booster turned to the boost option, my battery had already charged it’s way back up to 13.5 volts.

Quite an impressive improvement for such a short time being installed and used.

For a battery that costs close to $500, it’s important to take care of them, especially if you are on the trail a lot. The last thing you want is a battery failing on you quicker than it should, especially when we depend on them for much more than just starting the vehicle.

If you have an off-road fridge or freezer, or run multiple light options there’s a good chance your AGM battery isn’t sitting at the correct voltage it should be, and this is one way to help keep it there and not fail quicker than it should.

There are homemade options when it comes to making voltage boosters, but many of them don’t give you the three options the ARCLightLED triple state voltage booster does.

However, if you are technical you can probably come up with something for nearly a fraction of the cost. For those of you who cannot, for roughly $65 shipped you can have the voltage booster in about two days and installed a few minutes later.

When checking your voltage be sure to have the vehicle turned off, as you will receive readings higher while turned on as the battery is currently being charged. My sPod has a battery level reader built in, but there are other ways to check the voltage such as with voltmeters.

Installed this item on my 2016 4Runner with a group 34 AGM odyssey battery… put it into boost and the battery dash warning light came on. Is this normal?

Just curious if anyone knows how this works for a 2021 4Runner? Website says it does not work for 2020+ runners due to reconfiguration of fuse box. Just curious if someone put some sort of voltage booster and AGM battery in their 2020 or 2021 runner. Thanks!

Is there an ARCLIGHTLED voltage booster for a 3rd gen Tacoma?

An odyssey battery is fully charged at 12.84 Volts. The 13.5 Volt reading you got may have been because of a surface charge. I have the voltage booster and it works, but I think the best way to read the charge on a battery is to let it sit idle at least over night and read it the next morning. With boost, and having run it for about 15 days, I see a resting voltage of around 12.7 ish volts which should be around 95% SOC.

Triple Stage Voltage Boosters are sold out and discontinued due to low demand.

As of now, these are back in stock with about a 5-7 day lead time.

Yeah, noticed that too. I bought the HKB fuse that’s supposed to boost voltage. I just installed my Northstar 31M AGM last night and have a few more tweaks to my lights and adding a few more goodies (eg, ARB Twin Compressor, Switch-Pro 9100) before I add in the HKB. I want to make sure everything works well before adding another electronic variable to the mix.
I found this thread that be good to subscribe to, along with trail4runner, of course!
https://www.toyota-4runner.org/5th-gen-t4rs/216665-voltage-booster-31m-agm-battery-12.html