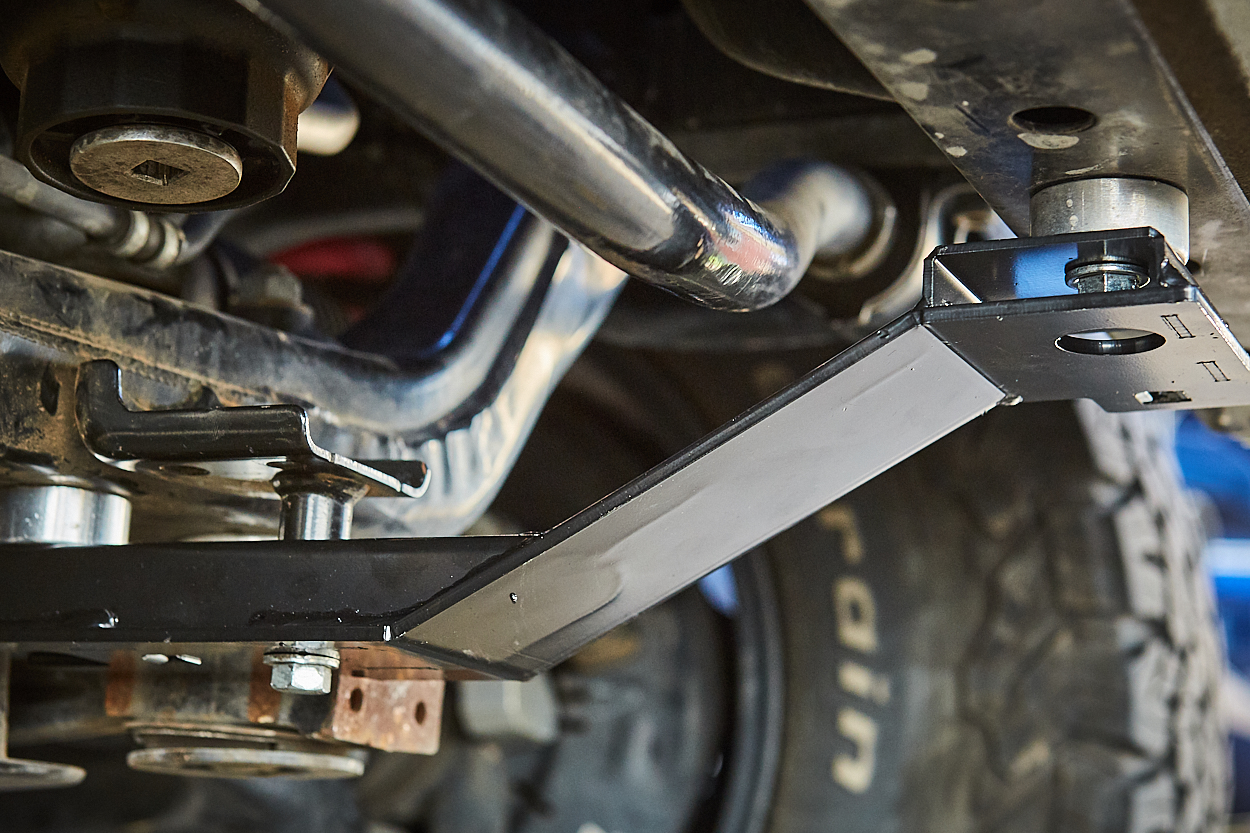 Shortly after adding a Toytec Boss Aluma Series lift on my 2018 4Runner TRD ORP, I started noticing a popping sound coming from somewhere under the front area when out on the trails. Oddly, this wasn’t a sound that I had noticed while daily driving.

Even on the first couple of off-road trips, It was something that didn’t happen very often. Or, perhaps those heavy jams while rolling through various obstacles drowned it out. After the new suspension components had a chance to settle in a bit, the mysterious and annoying popping (or sometimes tapping) noise started to become more and more noticeable.

At that time, my OCD fully took over and I was on a mission to find out the what, why, and how to solve this noise issue. Troubleshooting became a constant effort. I greased, wiggled, pushed, and pulled on every front-end component trying to narrow it down without much success.

During all the endless hunting, I started to notice how close the sway bar was to the driver-side stiffener brace (some refer to these as the radiator support brackets). 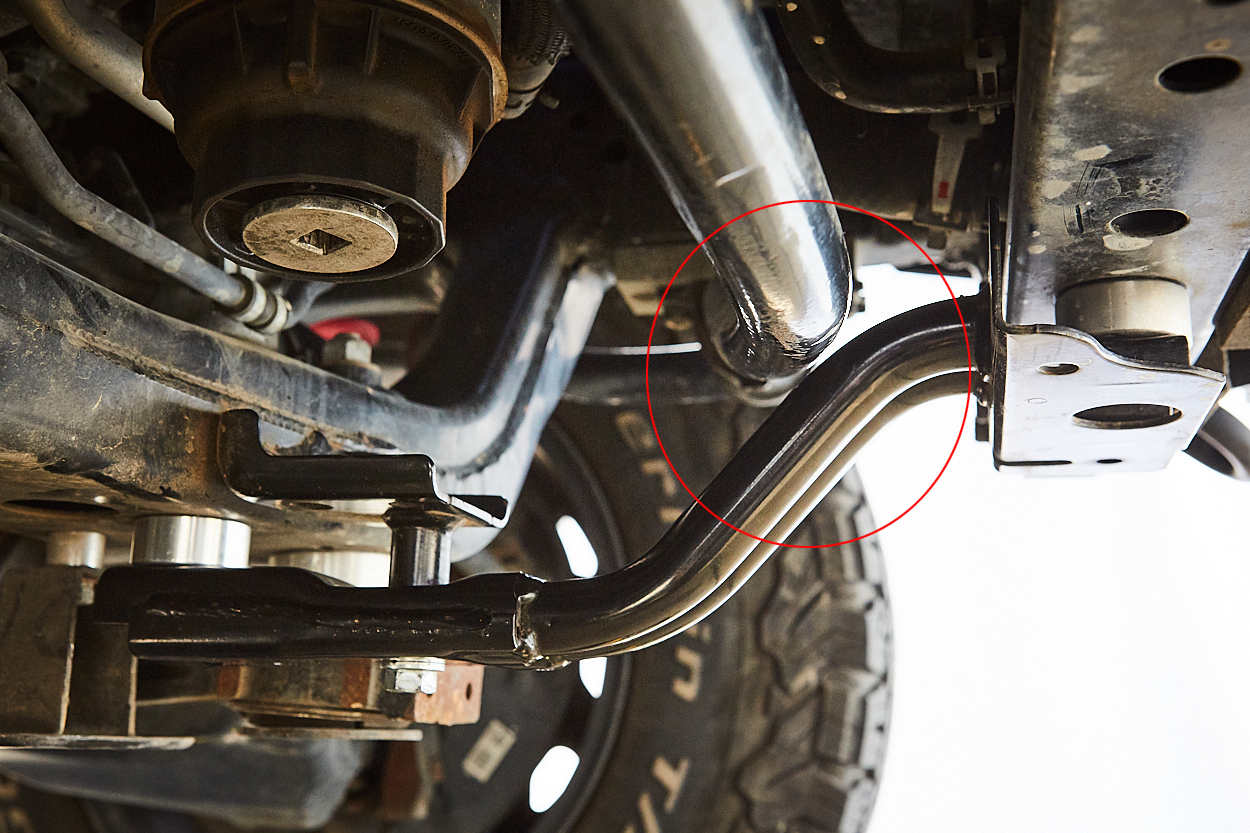 As you can see in the photo above, there just was not much clearance at all. It was literally between a 1/8 to a 1/4 of an inch of space. That’s while the rig was parked on level ground in my driveway. After a quick dive down the Google rabbit hole, I stumbled on other 5th Gen 4Runner owners that have had the same issue.

Solutions ranged from removing the sway bar to upgrading the stock skid plate with an aftermarket skid. The latter option often involves deleting the stiffener brackets altogether. Some people even took a grinder to that stiffener bracket to notch out a little more clearance for the sway bar.

After reading about those solutions, I was at a bit of a crossroads and unsure of how I wanted to proceed in solving my issue. I wasn’t really ready to drop the cashola on an aftermarket skid because my stock skid is still in pretty good condition. Removing the sway bar would give me a bit more articulation on the trails but didn’t seem like the safest solution on a top-heavy daily driver. That would also make navigating around crazy city drivers a bit sketchier than some of the most off-camber sections on trails.

In all honesty, I normally have no issue with cutting and grinding things on the 4Runner to get things dialed in. However, I didn’t like the idea of cutting out a section of something that is for stiffening support.

After a bit more research, I stumbled upon a product that was a safe, budget-friendly solution without all the grinding. In comes the ARB OME BP-51 Fit kit for the 5th Gen 4Runner. 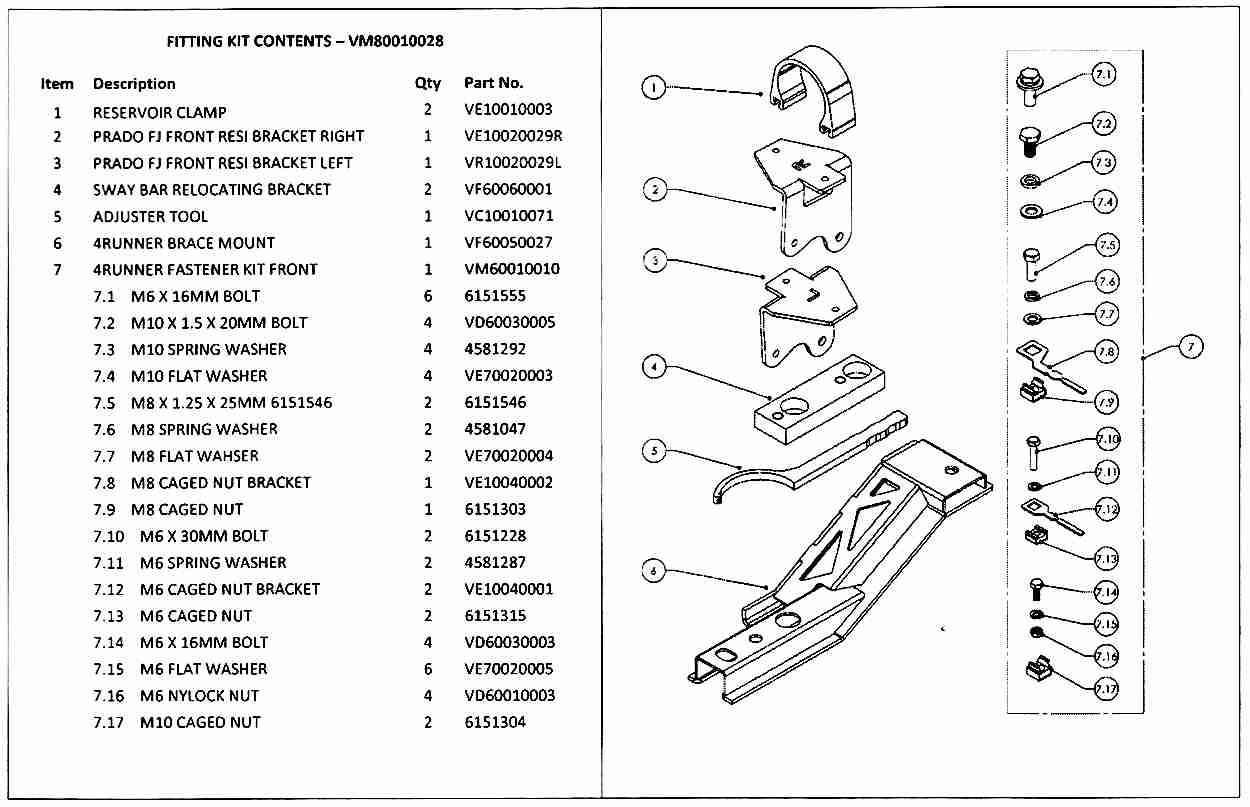 The ARB OME BP-51 Fit kit includes several clamps and mounting components to fit and install the complete BP-51 lift kit on the 5th Gen 4Runner. The kit comes with a reservoir clamp, some reservoir brackets, sway bar relocation brackets, an adjuster tool, and an assortment of fasteners needed for the complete kit install.

Also included in the kit is a specific part that I needed to solve my noise issue. This is the driver’s side stiffener brace mount. 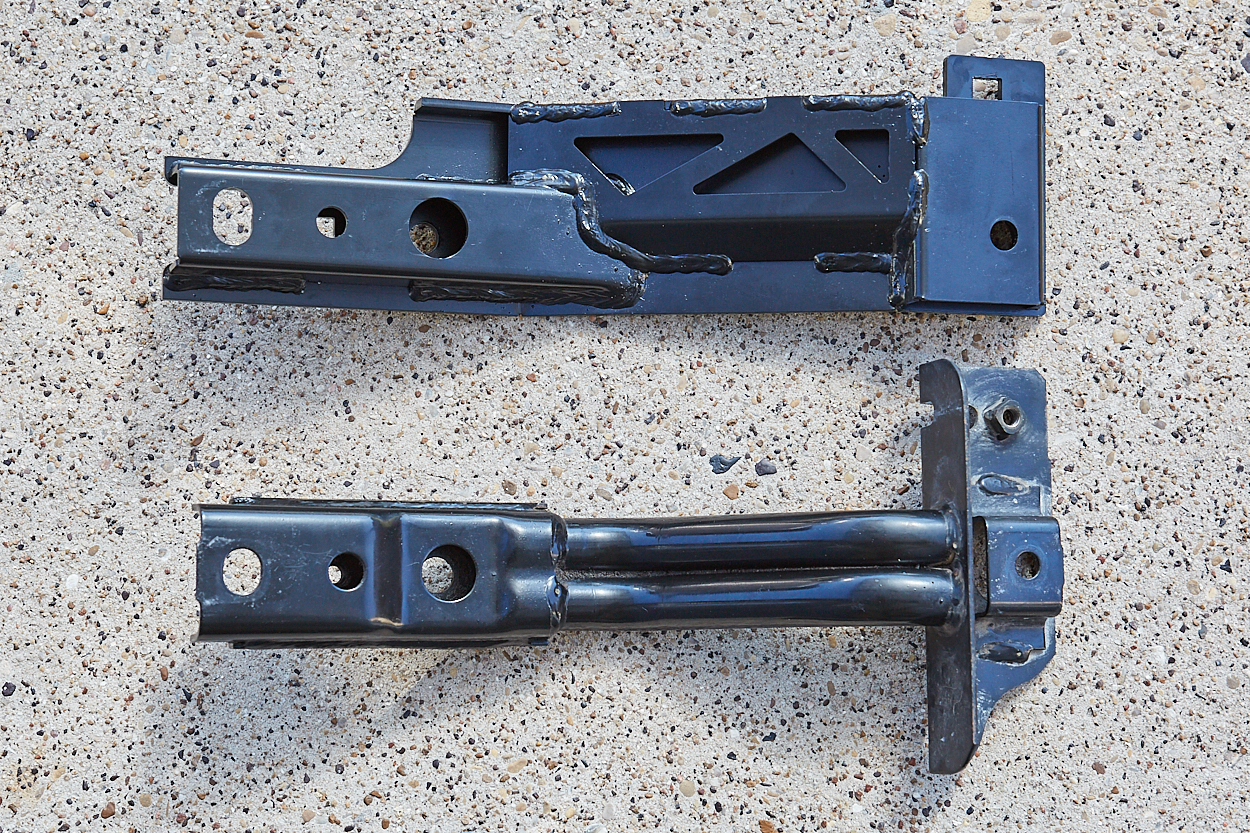 For this solution, most of the ARB kit is not needed. With my rig running a Toytec lift kit that included a diff drop and sway bar relocation brackets, I only needed the included stiffener brace mount along with two M10 caged nuts. 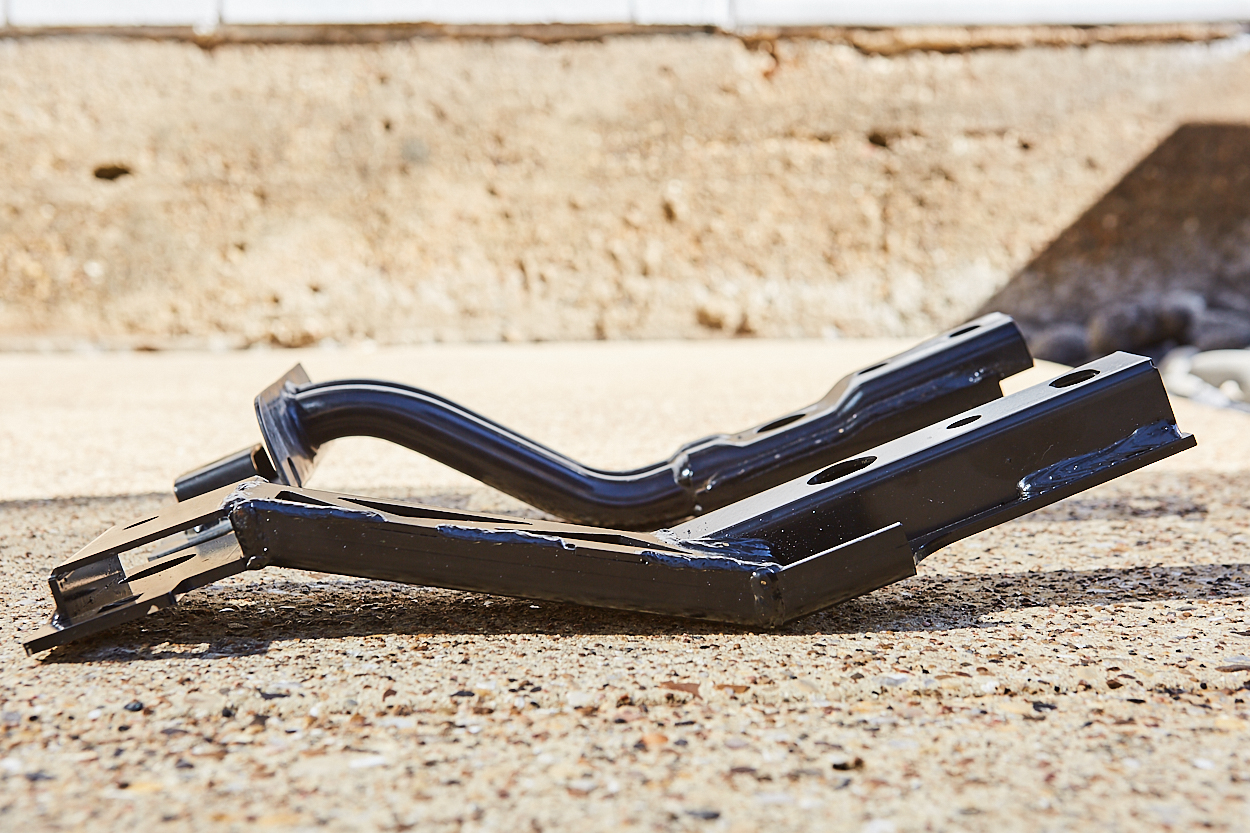 The new stiffener brace mount is shaped in a way that is more “low profile”. It gives the sway bar more clearance thus avoiding any potential contact. In short, it solves the issue of the annoying noise that I was hearing.

The installation only requires the removal and reinstallation of seven bolts in total. In total, it only took me 30 minutes and most of that time was figuring out which of the caged nuts fit with the stock bolts for the stock skid plate.

Before You Get Started: Remove Factory Skid Plate

To get access to the driver-side stiffener mount, we need to remove the front factory skid plate. To remove the skid plate, remove four 12mm bolts. Set the skid plate aside along with the four bolts. We will be reinstalling these again in the end. 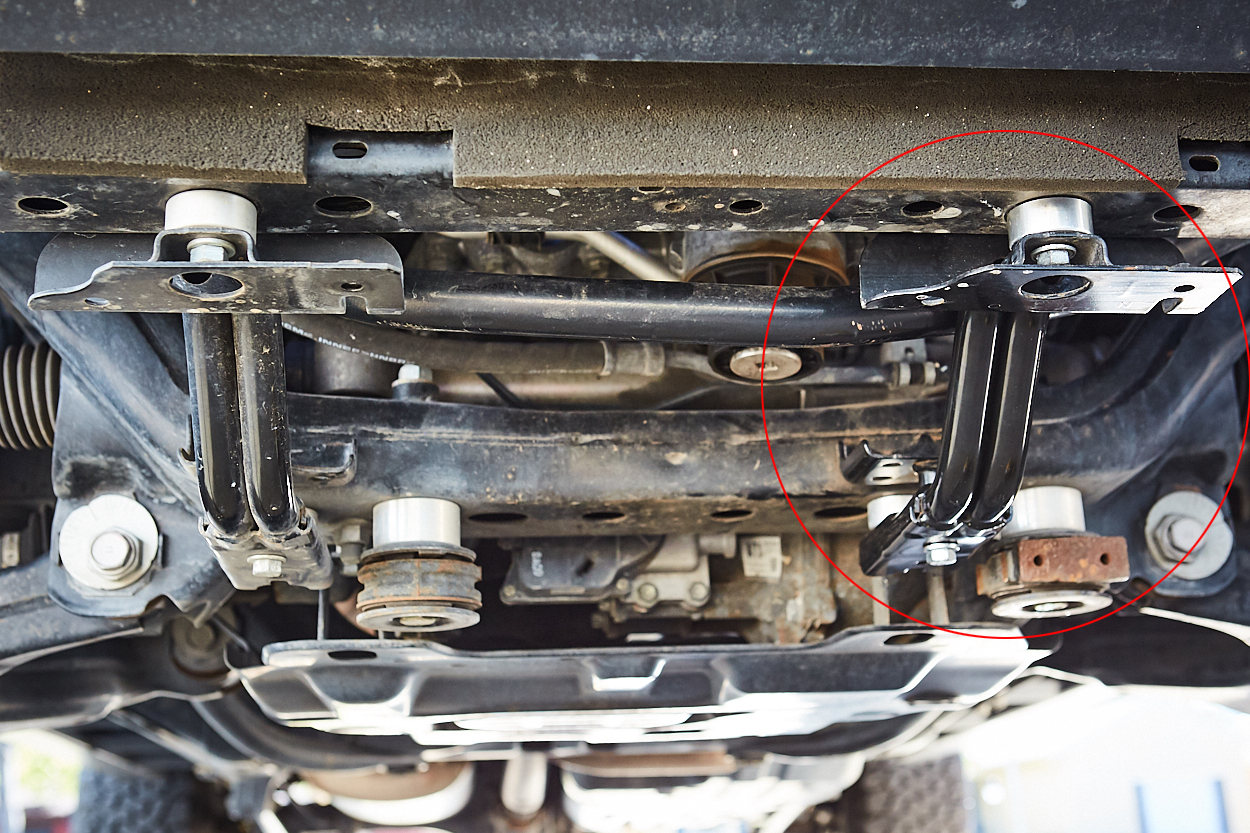 With the front skid plate removed, you’ll see the two stiffener brace mounts. We only want to remove the one on the driver’s side. 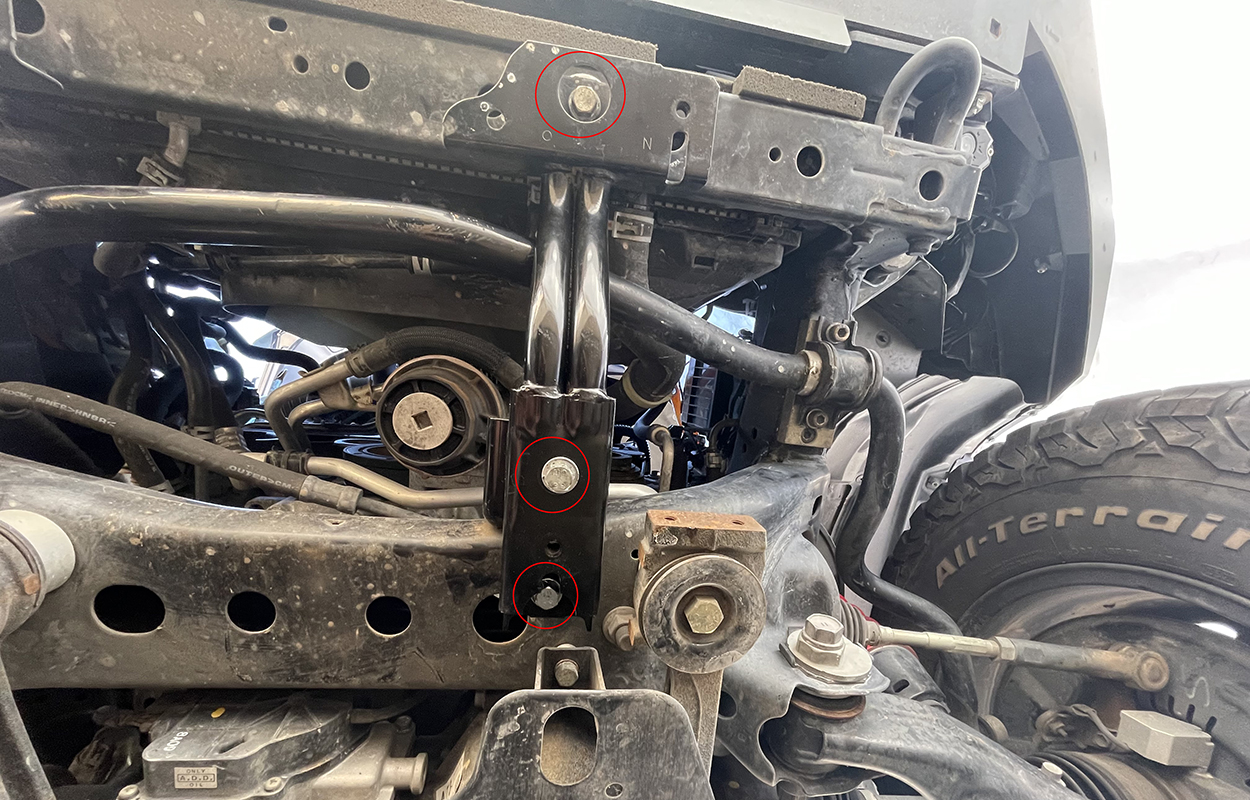 Once the driver’s side brace mount has been located, remove the three 14mm bolts. 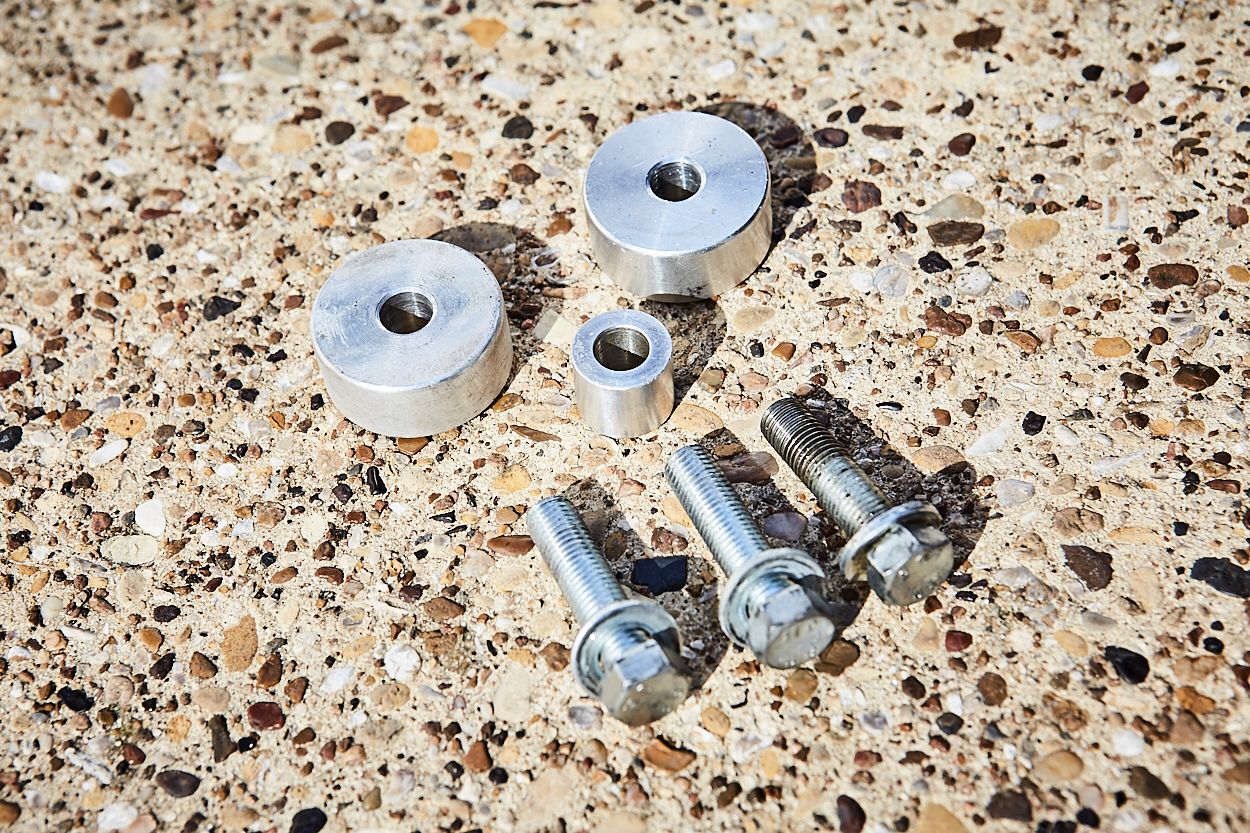 Set these bolts aside as they’ll be reused along with any previously installed spacers. 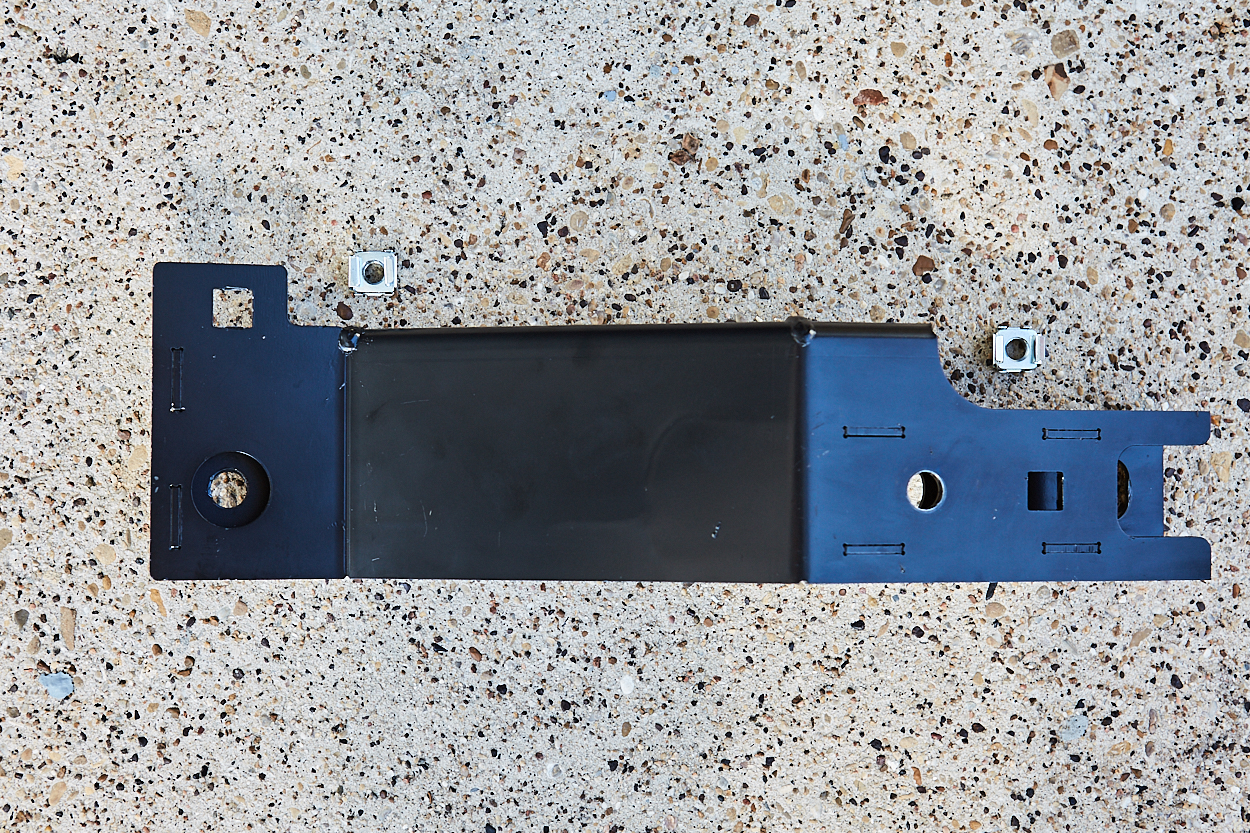 Get the new BP-51 stiffener brace mount ready by finding the caged nuts in the hardware bag. Be sure to grab the ones that will fit the original bolt holes for the skid plate. The caged nuts will fit and slide into the two square holes you see above in the brace mount. 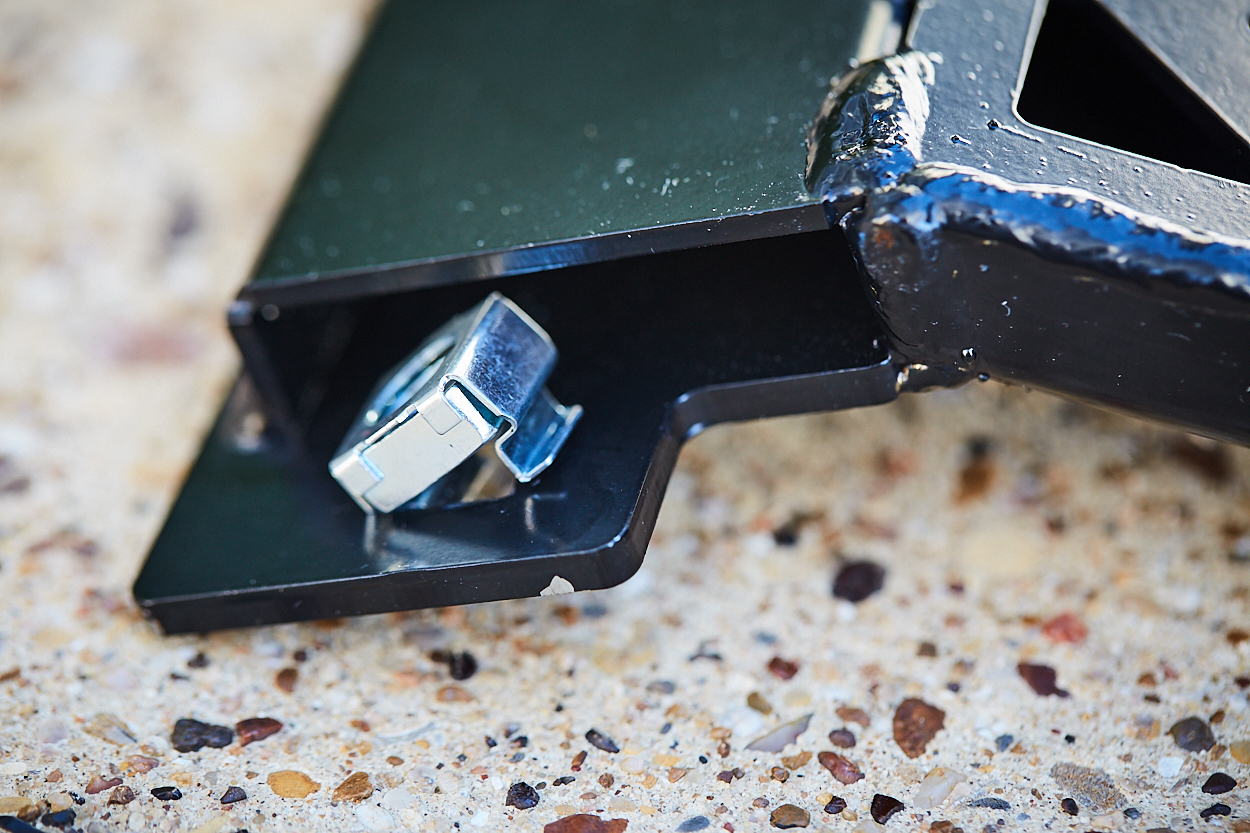 These caged nuts have little flared-out feet on them. Insert them by sliding one side into the square hole and pushing the other down into the hole till it clicks in place. 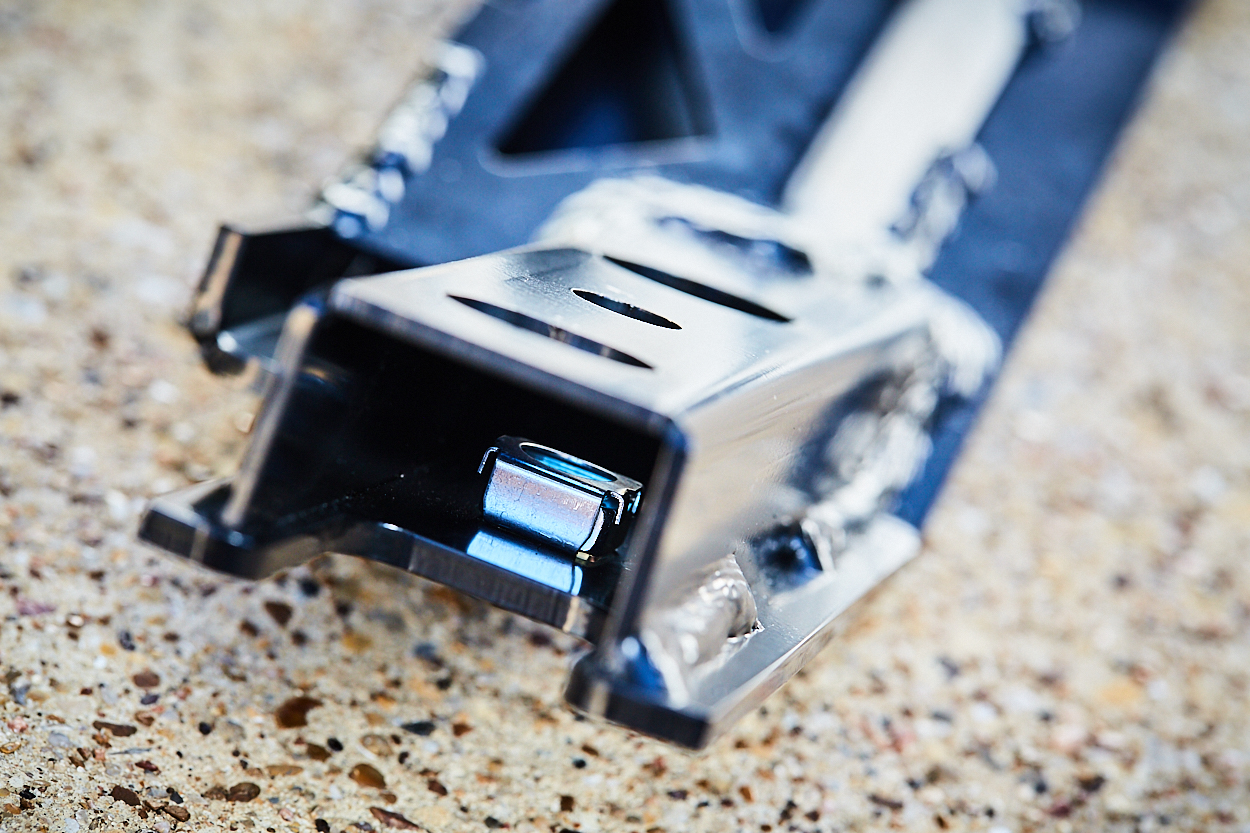 The second one takes a bit of some fancy fingerwork as you need to push it into the frame of the brace and get it to click in. The photo above shows the correct orientation. These caged nuts are what the stock skid plate will attach to on the driver’s side. 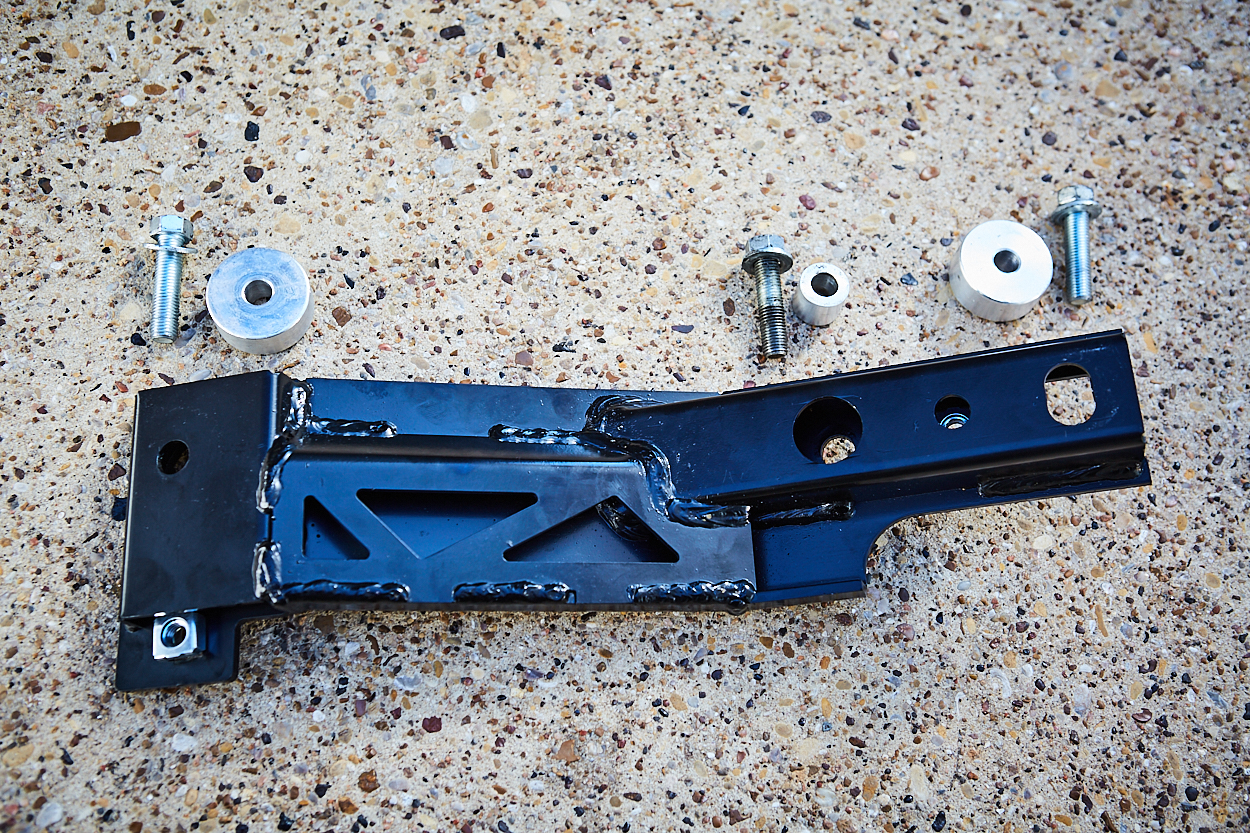 Once the caged nuts are in place and you have gathered all the original spacers and the three 14mm bolts. you are ready to start assembling it all back together. 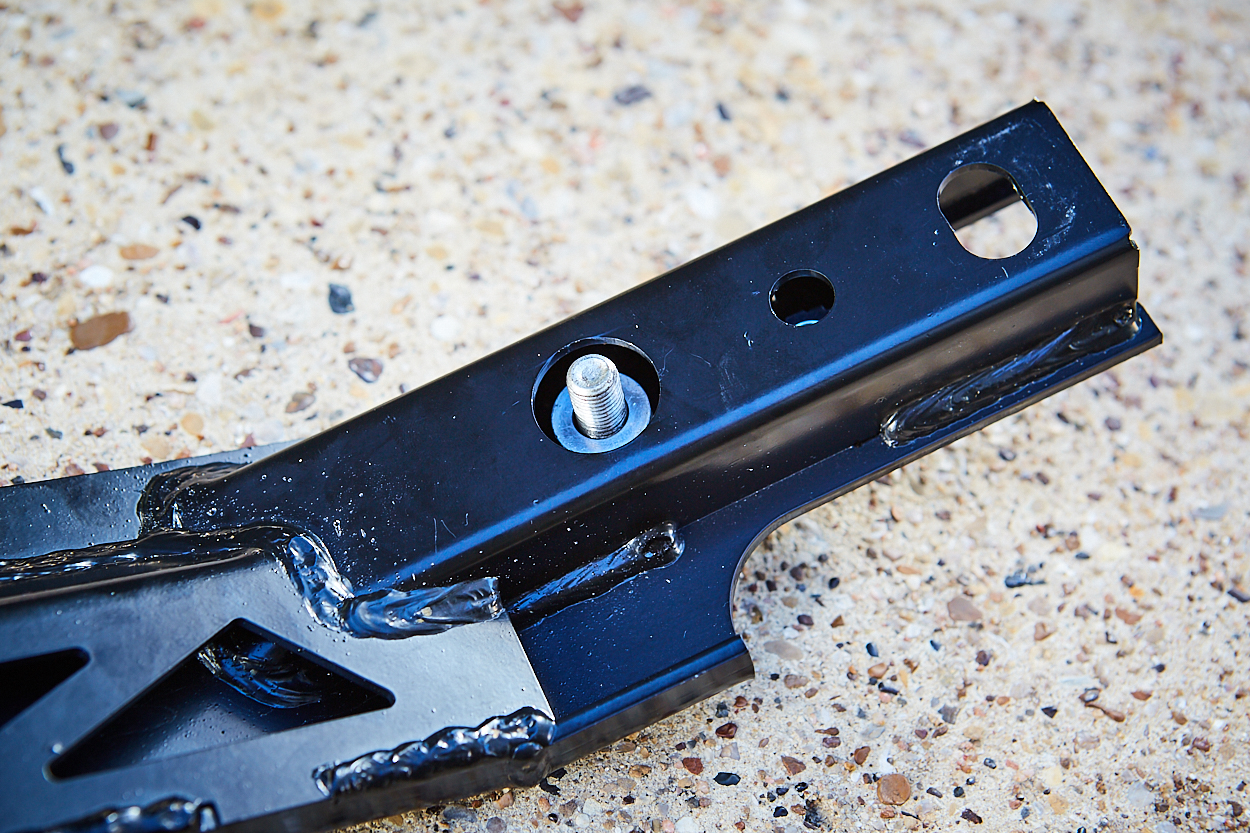 I like to start with the middle bolt by inserting it into the brace along with a small spacer.

Note: This was a part of the sway bar relocation kit from Toytec, yours could be different. 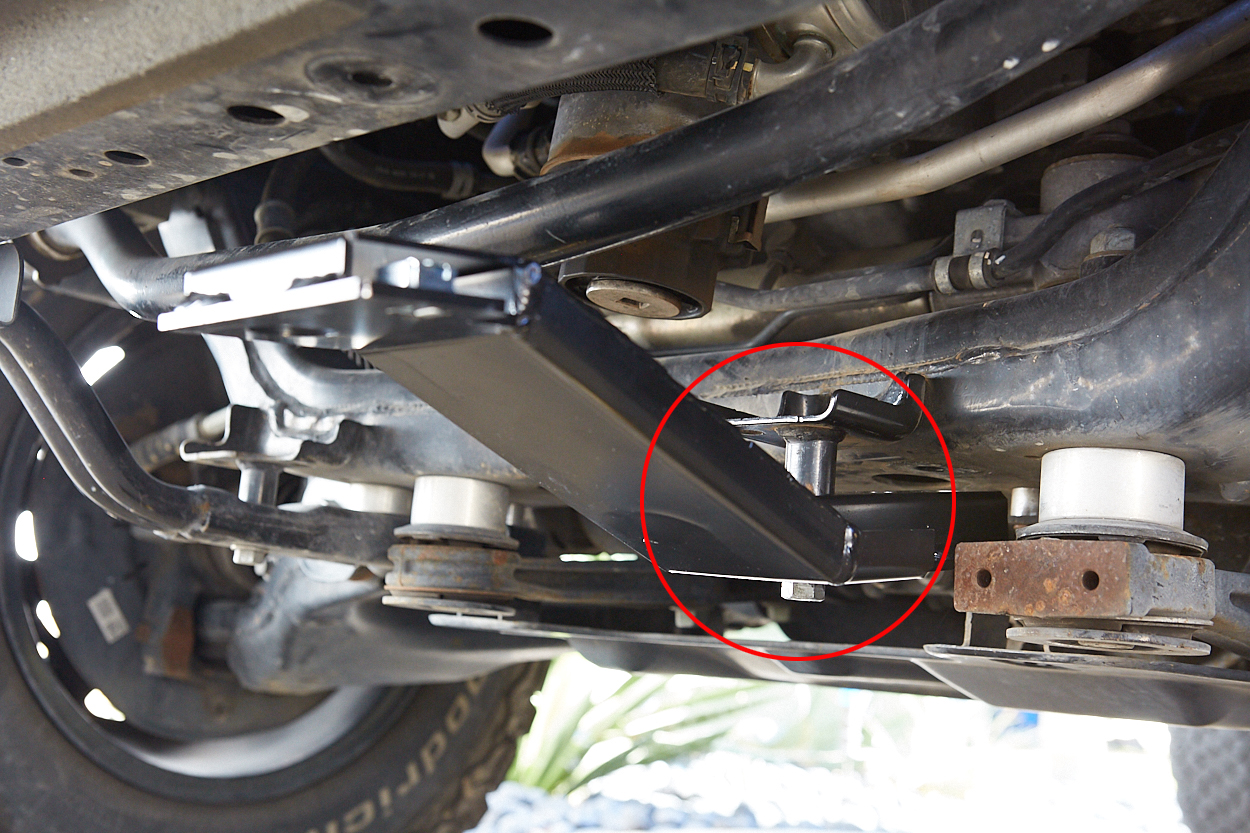 Line up the middle bolt and spacer to the mounting plate just to get the threads started. Don’t tighten it down just yet. 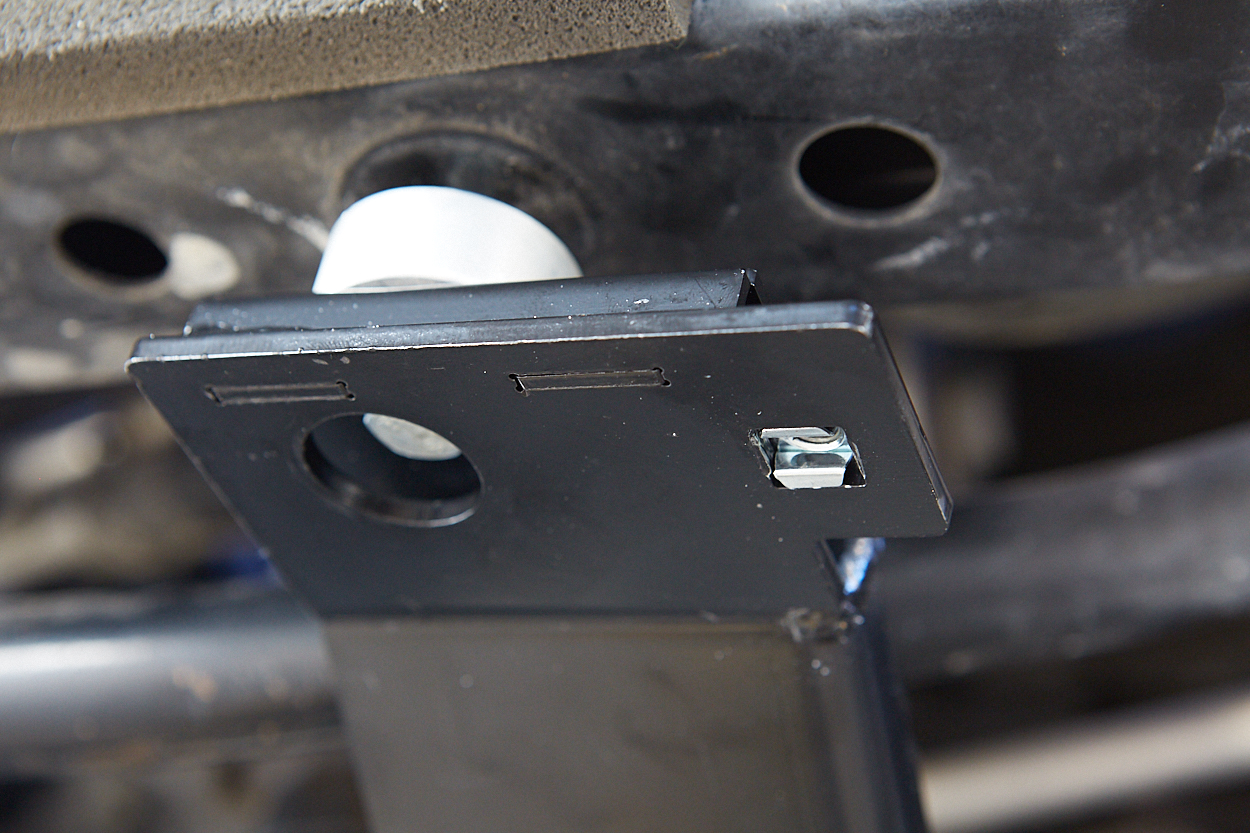 Get the front bolt and spacer lined up and threads started. 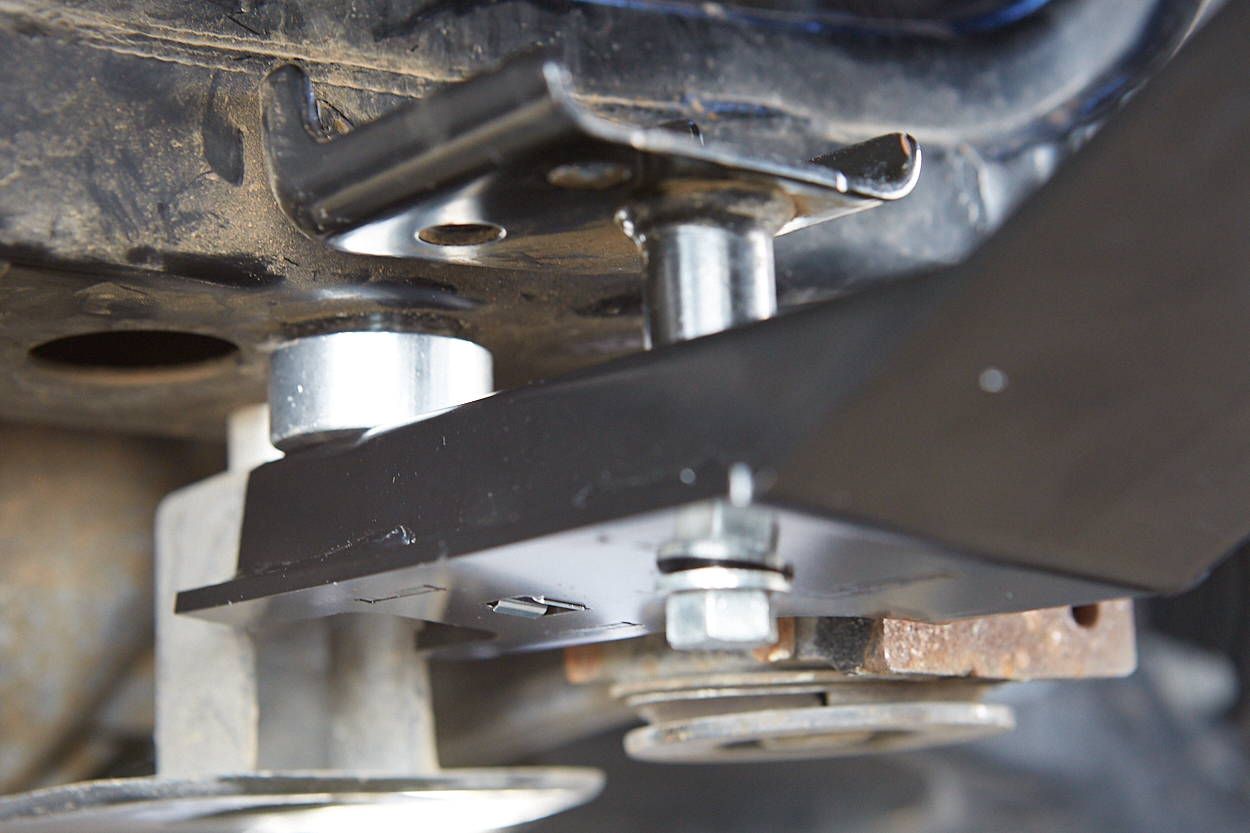 Once you have all three bolts and spacers in place, tighten them all down.

After all three 14mm bolts are tight on the new BP-51 brace mount, you’re ready to reinstall the stock skid plate.

Be careful when inserting the two 12mm bolts on the driver’s side and do not push on the bolts too hard when trying to get the threads started. It will not take much force to push those caged nuts out of the square holes on the new brace mount. I accidentally pushed them out and had to rework them back in, so just take your time.

It is best to get the passenger side bolts in first. Then, lightly get the driver’s side bolts started into those caged nuts. Finally, tighten them all down and that will complete the installation. 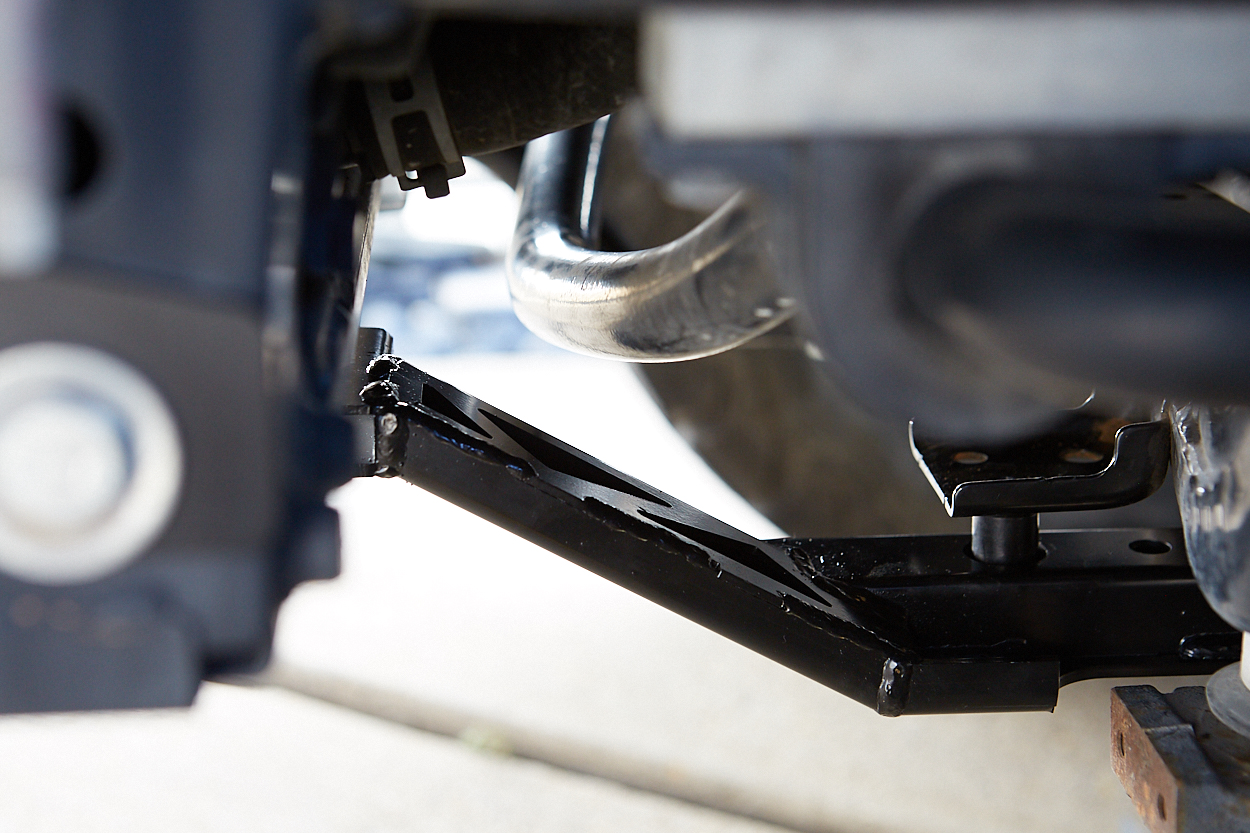 As you can see in the photo above, the BP-51 brace mount gives much more clearance for the sway bar. The only issue I can see in the long term is those caged nuts for attaching the skid plate. I’m hoping they will stick in and maybe seize into those square mounting holes over time.

I do all my own maintenance so I can be mindful to be easy with them. However, If you take your 4Runner to a shop for service, maybe getting some nuts welded to the brace mount instead would be better in the long run. Overall, it’s a nice solution to an annoying sound issue.

I had the same problem and I ended up removing those braces. I did have RCI skid plate that covers that entire area that also worked as radiator support to some degree.

worked perfectly fine for daily driving and also canyon carving when getting to/ coming back from the trails.

Hey, I also have the RCI skid plate. Can you be a little bit more specific about removing the brace?
My RCI skid plate goes through that brace at least underneath the radiator so when you say remove it, do you mean you just cut it off or you remove the whole thing?

This is probably one of the most helpful articles I’ve ever read because I’ve had the same problem and could not find out what or where the noise was coming from !!! Thank you very much. Just wanted to know when looking on the site to purchase this kit, there are several options I’m assuming since I have a 3 inch lift kit that I would purchase the 3 inch?