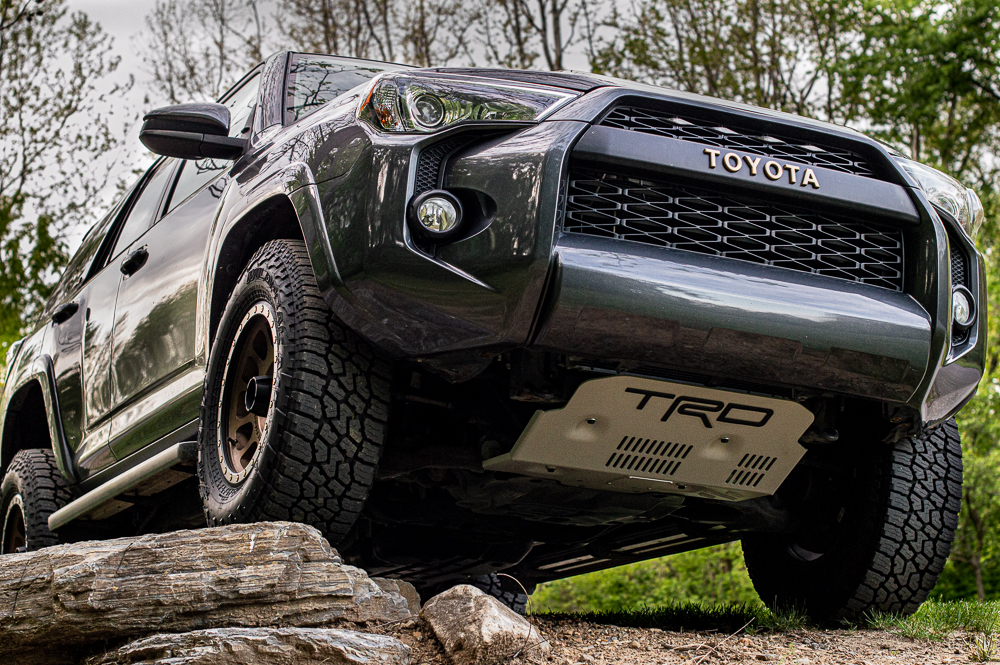 One of the most important things to do to prolong the life of our 4Runner’s is to protect them!

There are several ways to do this, such as regular maintenance, proper driver training, and installing armor for when you’re off-road. In this article, I’ll be highlighting a newer option for a skid plate from Car Trim Home.

They now offer an imitation TRD Pro skid plate for one of the best prices I have seen. It is an aluminum plate, finished with a grey paint job, and comes with red TRD letters, just like the original. The big difference though is that they offer two styles: the standard style you would find on the TRD Pro and a KDSS version. This allows those who have KDSS the protection and styling of the OEM style plate without having to take a grinder to a $300 skid plate. 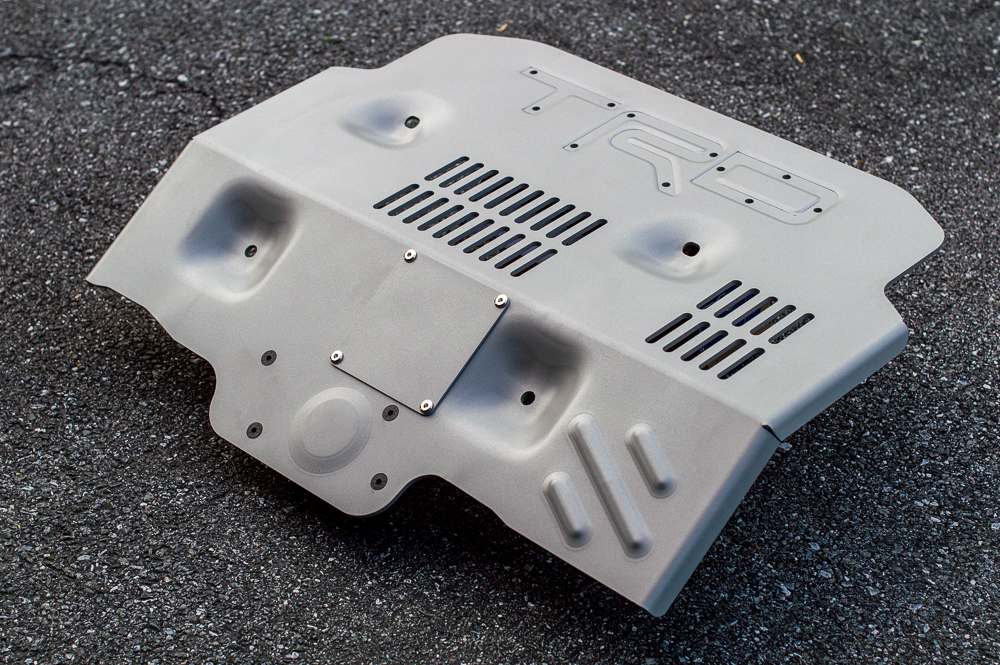 Out of the box, it looks almost identical to an OEM TRD skid plate. The Car Trim Home plate is ¼” thick aluminum like the OEM one. The finish is very similar in color and texture as well. The main difference is that the sides are cut down to about ¾” tall to allow room for the KDSS. 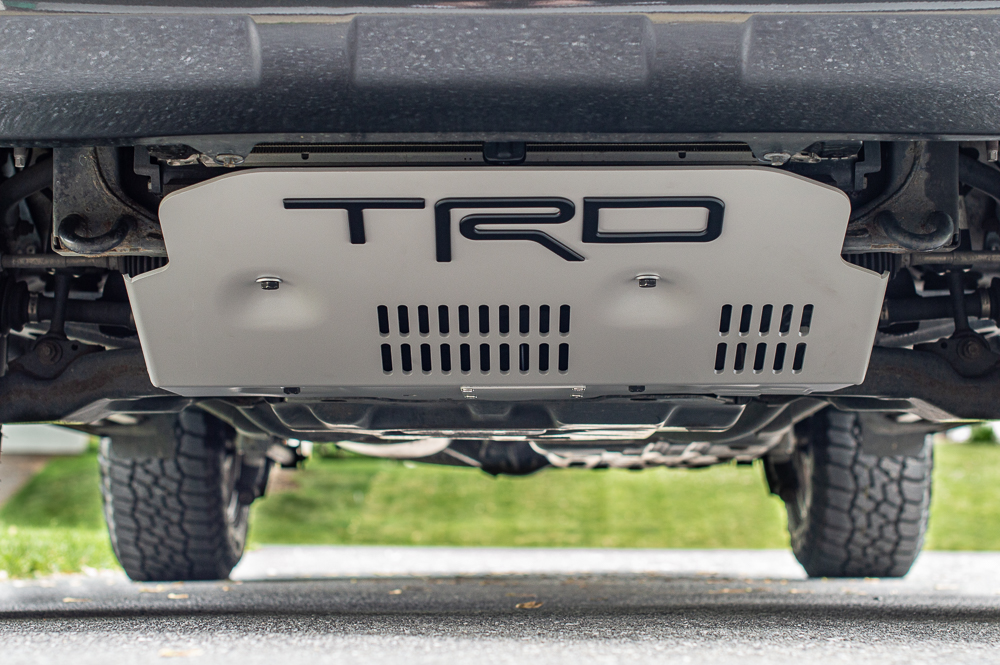 The Car Trim Home skid plate is very easy to install. Depending on your 4Runner trim level, you may have different stock skid plates to remove. My SR5 had a plastic guard and a very thin skid plate to remove. 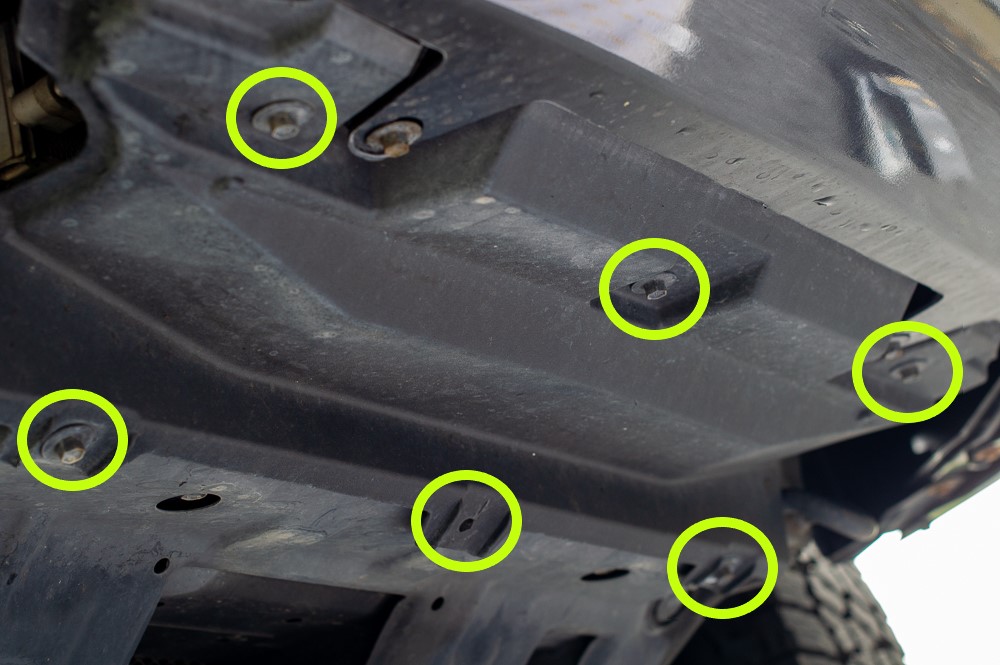 The plastic guard has six bolts holding in place. (Mine only had five so I think the prior owner lost one.) Remove the bolts and set aside the guard. 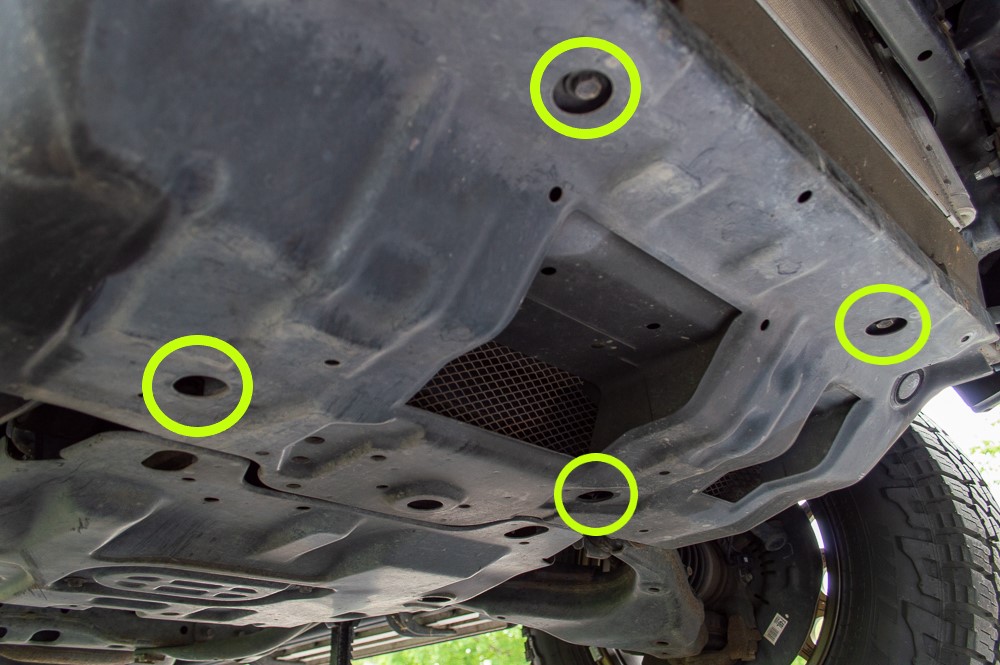 The stock skid plate has 4 bolts that need to be removed. Make sure to hold onto the skid plate so that it doesn’t swing down onto you when the bolts release. 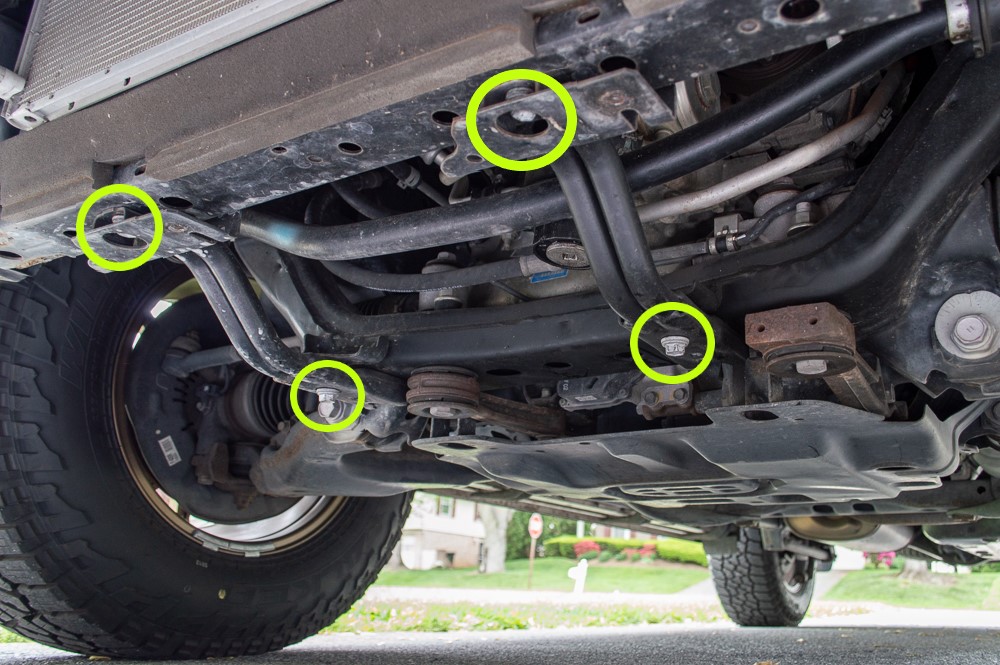 The new skid plate will bolt into where there were already bolts before. You’ll need to remove the four bolts on the frame supports. You’ll have four new bolts going in their place. And don’t worry, the frame supports don’t move after the bolts are removed. 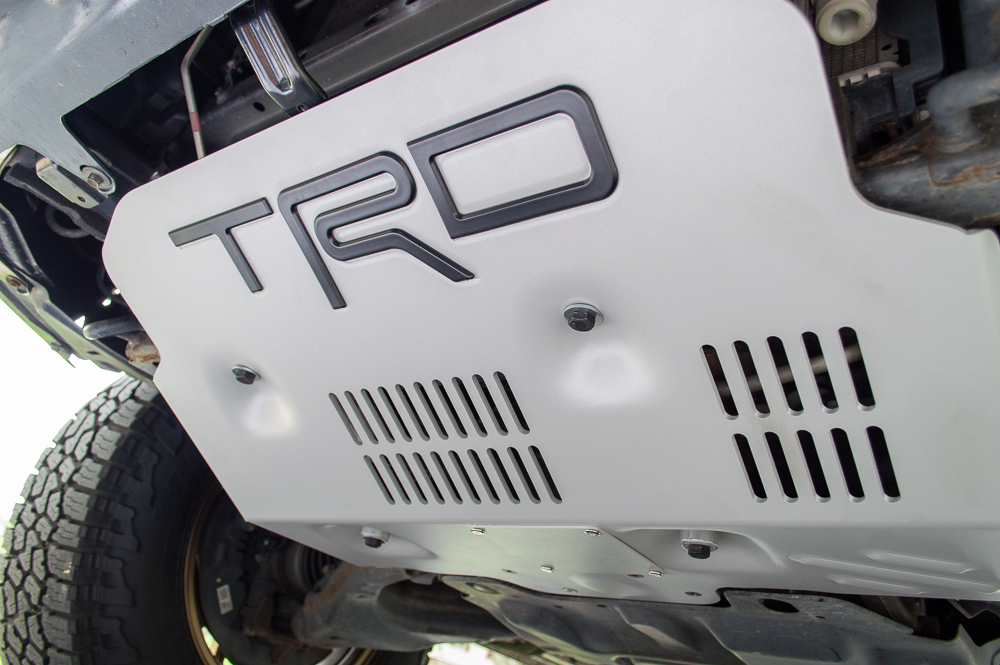 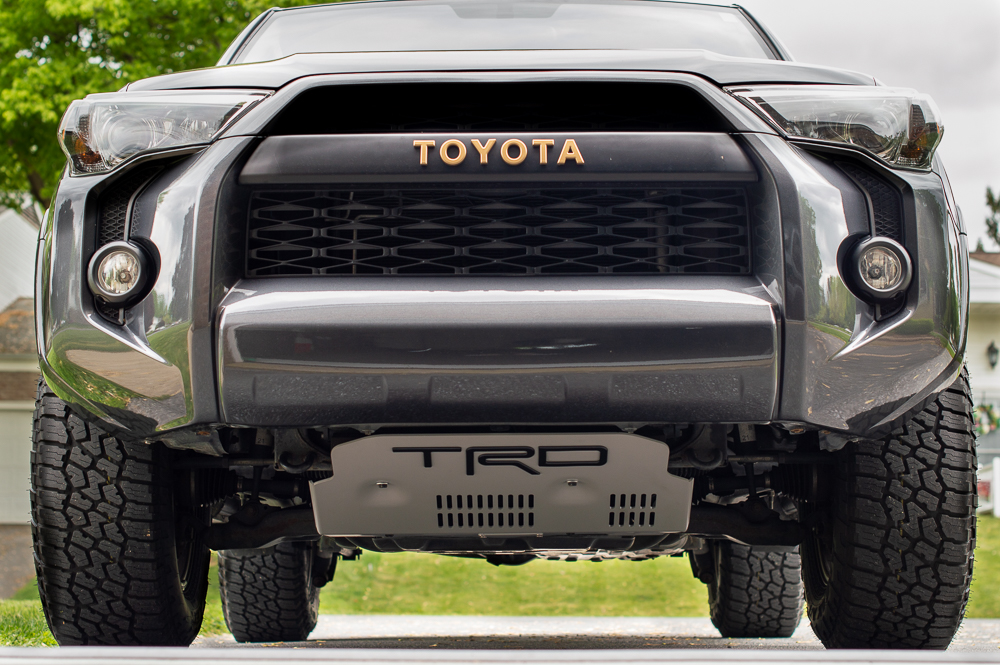 I really like the look of the TRD Pro skid plate. With the Car Trim Home skid plate being an almost identical match for a better price, it was a no-brainer. I’m still getting the same protection and aesthetics of the Toyota skid plate, but saving at least $30-50 depending on what prices you can find for the OEM version.

It’s also really nice that they offer two styles, with a version for those with KDSS. Unfortunately, I don’t have KDSS to vouch for the fitment, but the fact that you can get the “OEM look” without the hassle of measuring and cutting is a major bonus for choosing Car Trim Home’s skid plate. I also thought the letter inserts benefitted from having the pegs and cutouts. It allows for a “straightforward” fit, but it also helped when I painted the letters.

Personally, I didn’t want bright red letters, so the pegs kept the letters up off the cardboard when I sprayed them, keeping the fresh paint from sticking on the visible parts. Overall, if you’re looking for an upgraded skid plate, this one is at a great price, has the OEM look, and provides options regardless of your 4Runner’s trim level.

I'm a husband and a girl-dad, based out of southeast PA just looking for adventure with my wife and daughter. I've always loved learning how things worked so it's been incredibly fun customizing my Toyotas. I hunt, fish, try to stay in shape, and love spending time with my family.

This is not a good fit for KDSS 4Runners. I ended up sending mine back. I did try using the spacers on the front and rear and tried removing the support braces. The main problem here is that the edge of the plate is directly below the KDSS ‘piston’ and you risk them interfering. Some other skid plates that support KDSS get around this by making the skid plate more narrow so that the very bottom of the KDSS ‘piston’ mechanism is outside the plate. There is plenty of room for the sway bar itself using this plate but not the lower portion of the piece that I’m calling the piston that moves up/down – where it is directly over the edge of the plate. See pics… Hope this helps.

I just installed this, KDSS version, on my 2020 TRD ORP. I had to to remove the frame support as stated but it fits.

Just purchased, attempted install on 2021 TRD Offroad – can confirm this does not fit vehicles with KDSS

For the life of me, I can not comprehend why you would suggest this Chinese made garbage the is an imitation of a mediocre design, when you could be suggesting real deal American made great skid plates, from RCI, CBI, SSO anybody… but you don’t make affiliate sales from those sites. So this site will continue to push junk as long at the authors get kickbacks from the links… Let’s try and make a world that encourages and fosters better ideas and better builds. THESE ARE JUNK. RCI has a much better version for KDSS and Non-KDSS for around $295.00, AMERICAN MADE, with service openings for oil changes.

We cover all products, affiliate links, or no affiliate links, kickback or no kickback. It’s up to the user to decide what to buy. We’re not forcing anything on anyone. Sorry, you see it that way. This is one author’s opinion on a product we had nothing to do with. Not sure what the difference is between this guy sharing it here or somewhere like 4runners.com or t4r.org. The same use case applies it’s just more organized and detailed over here. I agree with you on RCI, I ran those skid plates for 3 years. I covered their full skid plate install/review years ago on the blog. It’s a MUCH better product, hands down. You are absolutely correct. No one is arguing with you. It’s just another option on the internet, if you don’t like it, that’s cool but don’t knock the guy running it or the platform it’s being talked about on.

Just installed the skid plate on my 2018 w/ KDSS. I ended up using the spacers in the front to allow more room for travel. I tested it out on the trail and it’s not rubbing or hitting the skid plate. I do have a 2.5” lift so not sure if that helps.

Did you have to remove the two support braces?
My concern is those braces are positioned to not interfere with the swaybar/KDSS so anything put in place higher the top of those braces runs a risk (As Justin mentioned in an earlier comment). Attached is an example (not mine) of the RCI KDSS compatible skid plate that goes under those support braces. Like others I’d really prefer the Pro skid look but worried on its position and contact.

How is the material? Not some cheap knock off stuff that’ll bend easily? I really dig the TRD skid plate and I totally want to pick it up but I’m a little hesitant. Your pictures made me more assuring it’ll be great 😀

This skid plate already took a few dings and scratches on the trail but nothing major. It’s holding up well so far. There’s a lot of angry people in the comments who are very concerned with what other people spend their money on. 🥱

It’s Chinese imitation. What do you expect? Just get the OEM.

Here are my thoughts based off of previous experience with KDSS and skids: I bought a TRD pro skid to put onto my TRD-Off Road (which has KDSS). I did the required cutting to clear the KDSS system (Cut off the vertical bits on the side). I even jacked up the front end and did a full slack hang of the front wheels to check clearance, cut off a little bit more of the plate just to be sure, and thought that it would be fine. Unfortunately, there is just not enough room to allow for full up-down, front-back movement of the KDSS system. There was contact with the sway bar and skid plate. This was just around town and on some graded dirt road. I can’t imagine what would happen in an actual off-roading situation, but I’m not willing to take that chance. Based on this experience, I feel strongly that this skid from Car Trim Home will not be able to clear a KDSS system. KDSS buyer beware.

Do you have step by step instructions for a 4runner with KDSS?

UPDATE: For vehicles WITH KDSS, you must remove the frame supports! The spacers will be used in the rear bolt locations and the others in the front. I just need to wipe the residue off mine, but here is a pic.

Removing the frame supports does not seem like a good idea. Do you see/have any issues with that?

Are you able to get us some pics with what appears to be an oil filter access door, perhaps removed from the plate?

I have just attempted to fit this to a 2018 TRD ORP w/ KDSS. The skid plate does not fit. The rear holes and bolts line up but the front ones are not long enough. The frame supports drop down lower than his example. I’m going to contact Car Trim tomorrow. Will take pics for reference.

Can you please confirm if that is an oil filter access door? If so, that really sets itself apart from the OEM skid.

Is that an oil change door that I see? If it is, then that’s definitely an upgrade from the OEM.

I am trying to understand why he bought the KDSS version if his 4runner doesn’t have KDSS.

Does anyone have a solution to help protect the now exposed underbody brought on by the skid plate? My main concern and fear with pursuing this upgrade is that it exposes a lot of components compared to the stock skids/panels on the SR5. I live in the NE and the fear of rust is preventing me from spending on it. Do you have any other skids you may recommend? I really want this just to finish the look of my SR5’s front end.

Basil–The front plastic piece can be reinstalled after some modification with a dremel to fit with the new TRD skidplate.

Last Saturday I installed my TRD skid plate on my 2017 4runner.
I modified the front plastic piece to fill in the front void.
Here are some pics.

What did you have to do to modify the front plastic piece?

First I messured the opening on how much I needed to cut.
Then I took my dremel saw and cut the plastic piece along a line per the opening to fit.Then on the back side I grinned down some flanges that were sticking out.