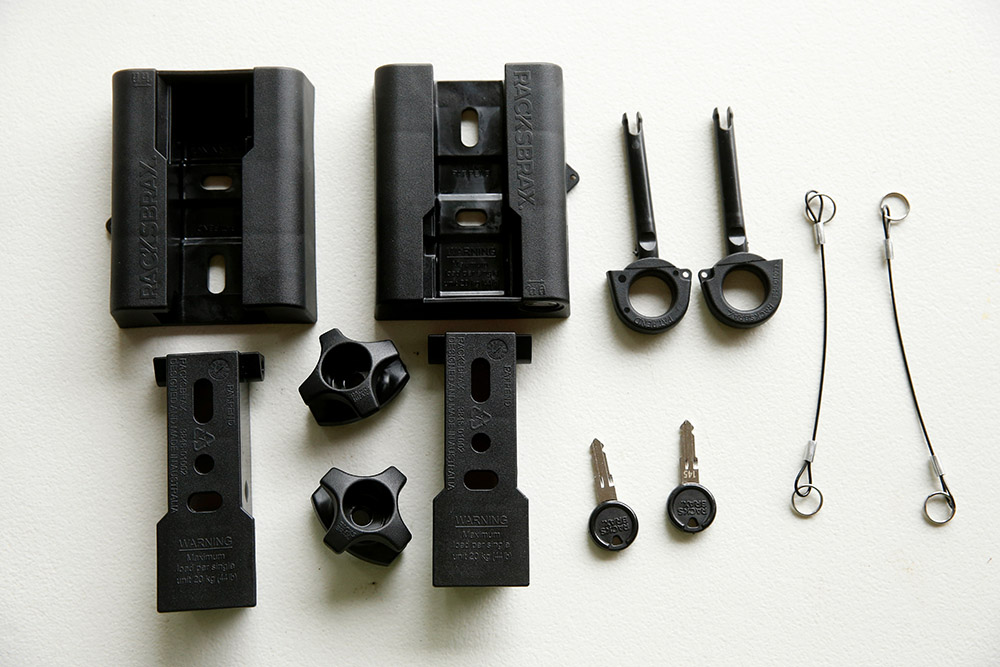 I’ve had a few awnings over the past couple of years, and while both of been great, the one thing I always wanted was a quick release option that was not only easy to install, but also easy to take off. A lot of companies seemed to have complicated installs or removal processes, but RacksBrax finally came through with the ultimate solution. 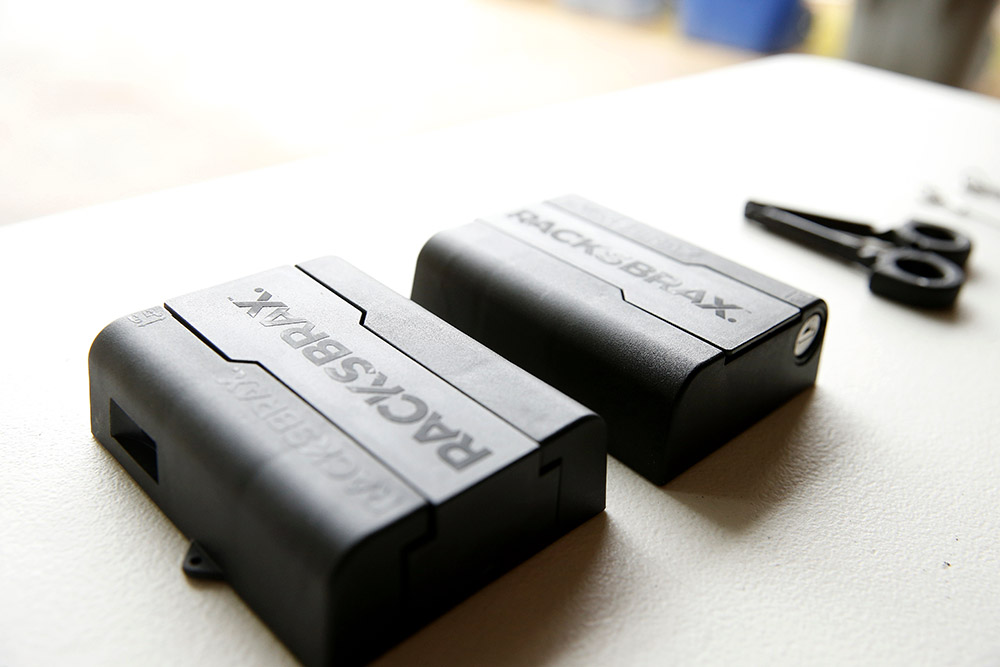 RacksBrax is a company based in Australia and focuses on solutions for those who are looking for quick release options for their awnings and other accessories. Thanks to Adventure Imports the products are now available for those of us in North America.

The answer was simple to me. The ability to install their quick release bracket with my already installed L bracket, without having to install an entirely new system. Additionally, their accessories allow you to mount them anywhere in your garage.

Unlike others on the market, they also had an innovative option where you can release the awning from the vehicle while camping, and come back to it standing up.

That is a true game-changer when out exploring. One less item you need to break down and pack up. 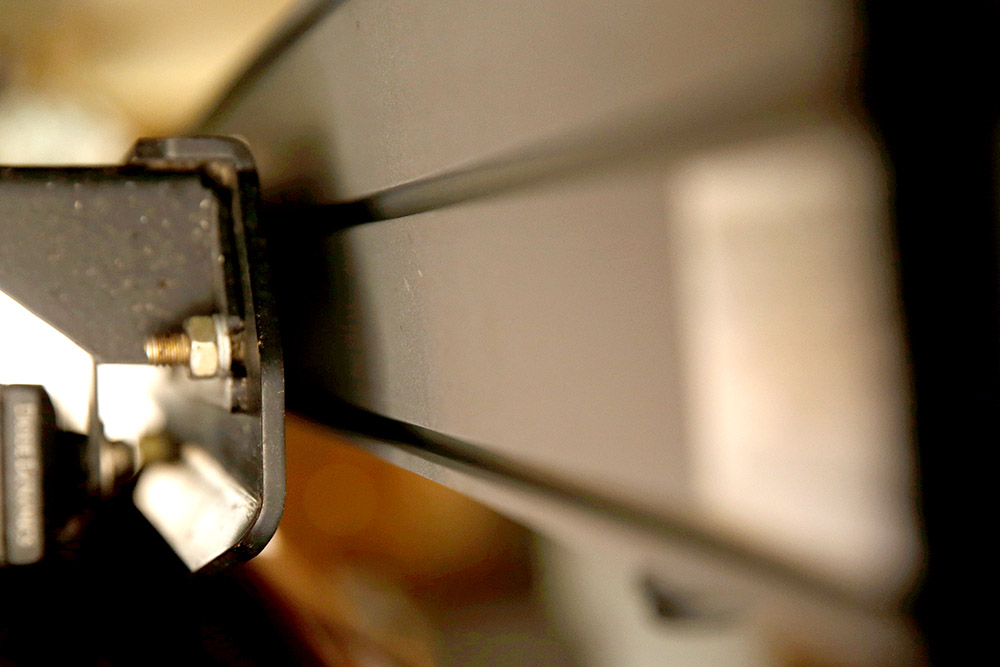 The first step in this entire process is likely going to be the lengthiest, and that’s removing the awning from the L brackets. If you are like me, your brackets sit in between the L bracket and the side of the roof rack. Because mine is as flush as possible, I’m unable to get any sort of ratcheting wrench in there, meaning I have to do it the old-fashioned way of using an opened end wrench and turning an eighth of a turn at a time. Very annoying and time-consuming, nonetheless something that had to be done.

During this process, it’s important to measure where your awning is mounted, so when you put it back on it sits in the same location, or close enough to it where you can make modifications to it on the fly, rather than being so far off you have to try to balance everything like a clown at the circus. 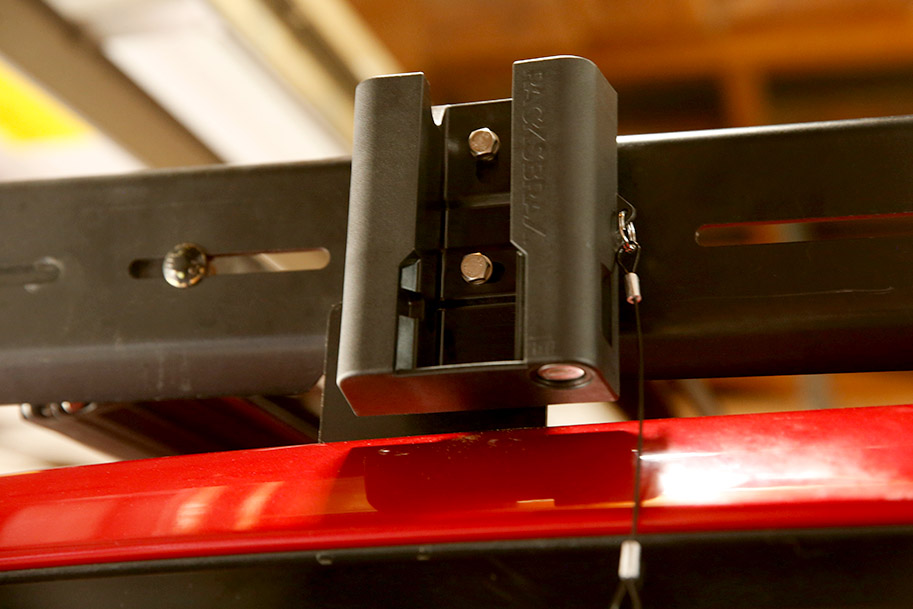 If you are using the standard L brackets the install is simple here. Push the bolt through with washers and attach the lock nut. Because of how flush to the body my awning sits I had to do this in the reverse of the directions, however, I have found no issues with doing it this way as everything clears as it should and is attached strongly.

You will also want to attach the side key ring to the bracket before installing the awning as the awning will be in the way of doing this. It’s your simple keyring style setup and is easy to do, but I recommend doing it on a table rather than having your arms up in the air above you which makes it a little more complicated.

This is a good time to measure the middle to middle of each bracket as the width is a lot wider than how the awning mounted traditionally. This could help save you some adjusting time later, as I had to adjust on the fly when trying to get the awning back on. 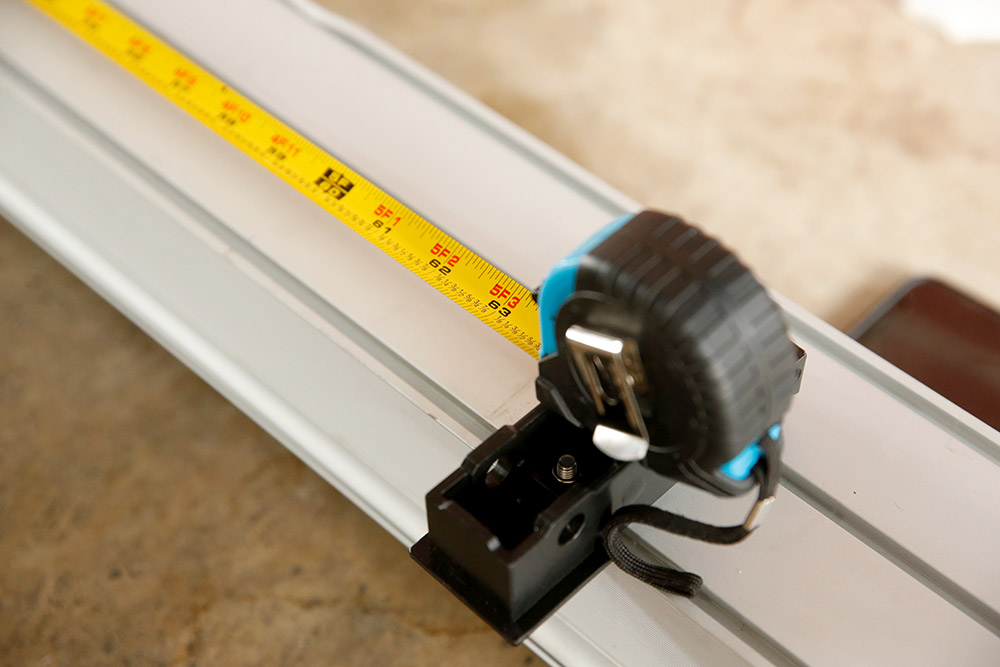 The first thing to do when adding the bracket to the awning is to loosely add the bolts so you can adjust. Then you want to take your measurements from earlier and match the brackets up to those same distances. While they may be off a bit, this will get you in the general ballpark and make life easier.

I always like to tighten them down semi-tighten and then check for fitment, this makes it easier to adjust than if you had them 100% tightened down. 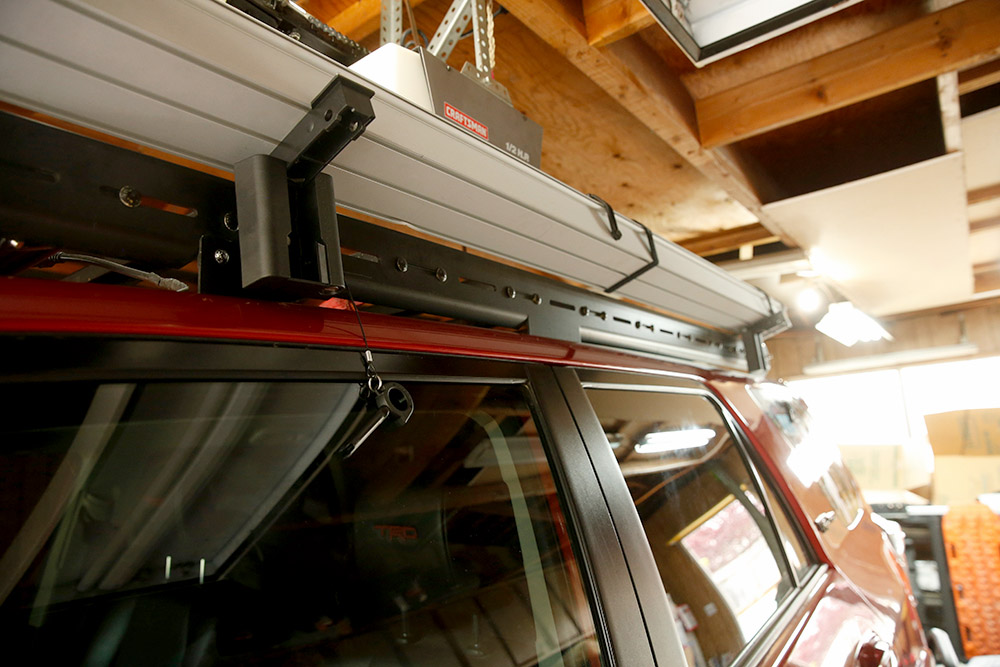 When you begin to test fit the awning you might need someone to help you. I was able to do this all with one hand, and I have what would be the heavier more bulk option with the ARB Touring Awning.

The easier way to do this is thanks to the design of the RacksBrax. Simply sit the top bracket knobs on the gaps at the top of the bracket. If your measurements are correct they will simply slide down in about a quarter-inch or so, and then the awning can come down and the bracket will swing into itself.

I was slightly off but was able to fix it with the awning sitting on top of the brackets because of how strong they were. As mentioned above, because I didn’t fully tighten them down I was able to slide the bracket over where it needed to be. Then I simply tightened everything down completely and the awning sat in. 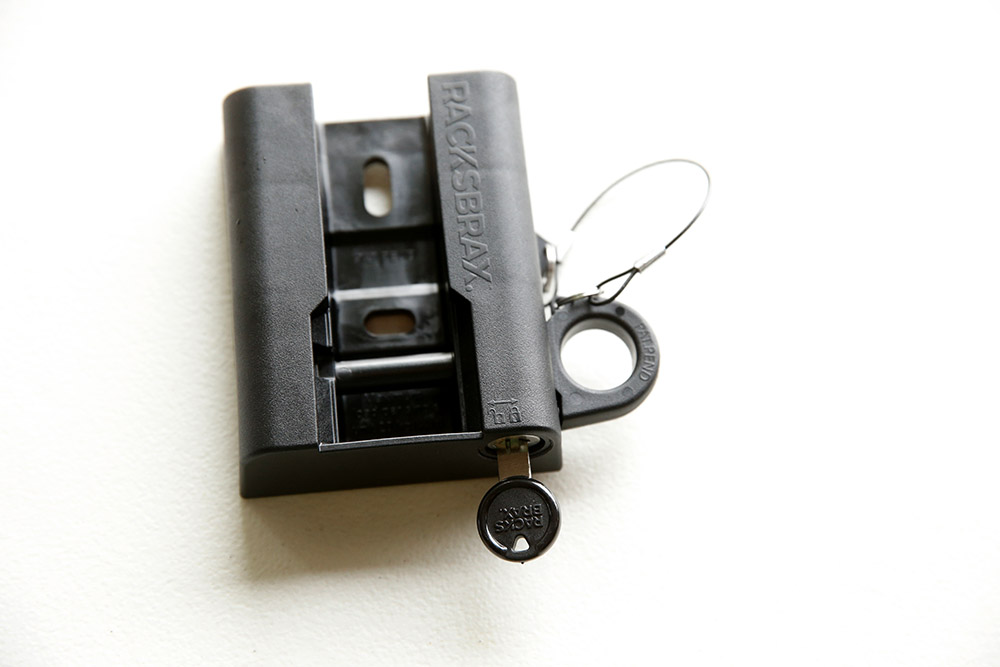 This was one issue I had with the RacksBrax, and depending on what roof rack and how you mount your awning could come into play. No design is ever perfect as well. We all have different setups and styles for what we’re running so not every device is made for every other device. In any case, we always manage to figure it out and get the job done. If you’ve been working on your 4Runner for any amount of time, you know this to be true; you always figure it out.

Because of needing my awning to sit as close to flush with the top of the roof rack in order to be able to fit in my garage, the key access holes for the awning are unable to be accessed. They are entirely too close to the body and making locking impossible.

While this may be a factor for some people it certainly was not an issue for me, mostly because I now only use my awning when camping or doing day trips to the mountains. If I’m parking in the city or working I leave the awning at home. In other words, the need for the awning to be locked is not an issue for me.

However, if you plan to use hotels or stay in the city for long periods of time where awning theft might be possible, make sure you have enough clearance for the locking mechanism to be accessed.

The easiest solution for me would be to move my L brackets further away from the vehicle, but I’m a little OCD and like to keep things sitting as nice as possible. 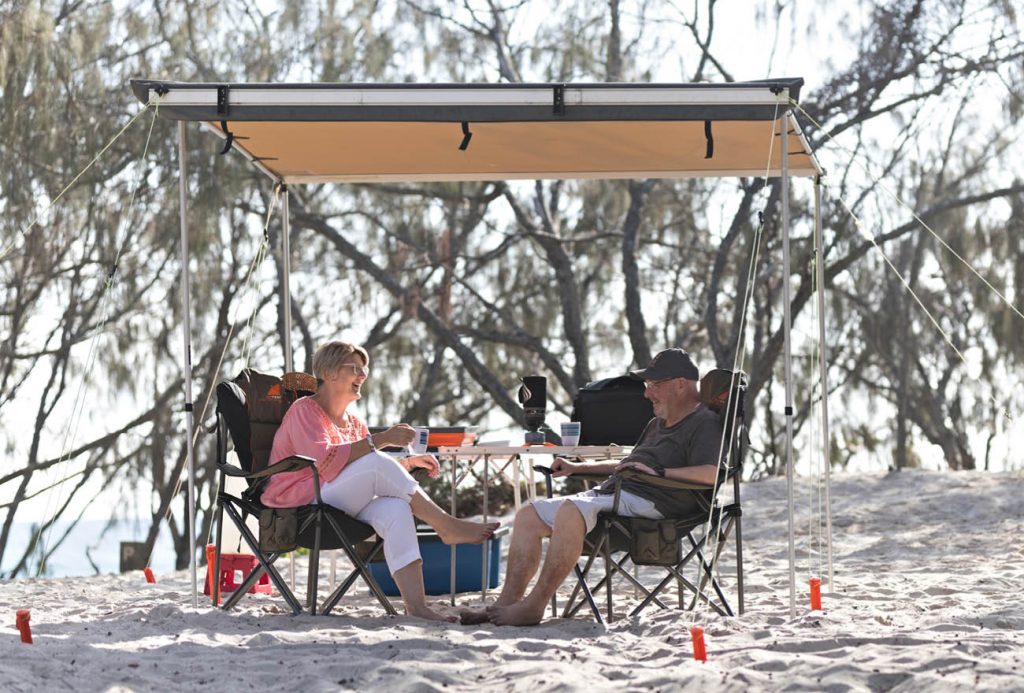 One of the most unique features of this setup is the ability to leave the awning in place, set up, and drive off without it. You will need two poles from your awning maker in order to make this work, however, this is something groundbreaking for the overland world.

You may want to leave your camp set up, or perhaps leave someone at camp with the ability to have shade. For instance, when I go to the Pismo to camp on the beach I like to go in the dunes to mess around. My wife isn’t a huge fan and usually stays back with my son. This is where something like this would come in handy big time to help them stay out of the sun at the coast.

RacksBrax offers an off-vehicle mounting solution as well. This allows you to mount the awning on the wall in your garage or perhaps on the backside of a shed or wherever you might want to store it. This isn’t exactly necessary as you could lean it somewhere, however, having it out of the way is a big deal.

I haven’t put this up yet as we are in the process of moving into a new home and haven’t closed on our current home, however, this is something that will be necessary as having it laying around in the garage takes up a ton of room, and if it were to fall while leaning could easily take out quite a bit of stuff. 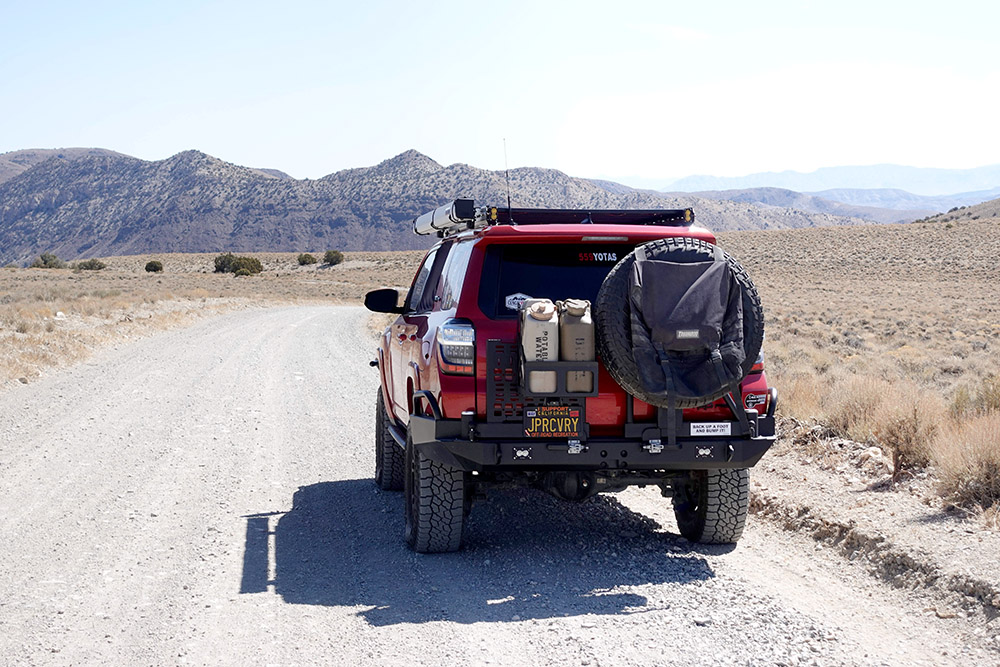 I have used this setup on the highways going speeds of 70-80mph for roughly 5 hours straight and found no issues or loosening of either the bolts or the awning itself. It is important to periodically check the bolts as you would with anything else on your vehicle.

The RacksBrax also was able to handle the countless hours and 150 miles of dirt in Death Valley National Park without coming loose or having any hiccups. This was a big deal for me as I wasn’t certain the plastic would hold up to the jarring hits, but it certainly did.

If you have an awning and need a quick way to remove and add the awning to your vehicle I highly suggest looking at RacksBrax for your solution.