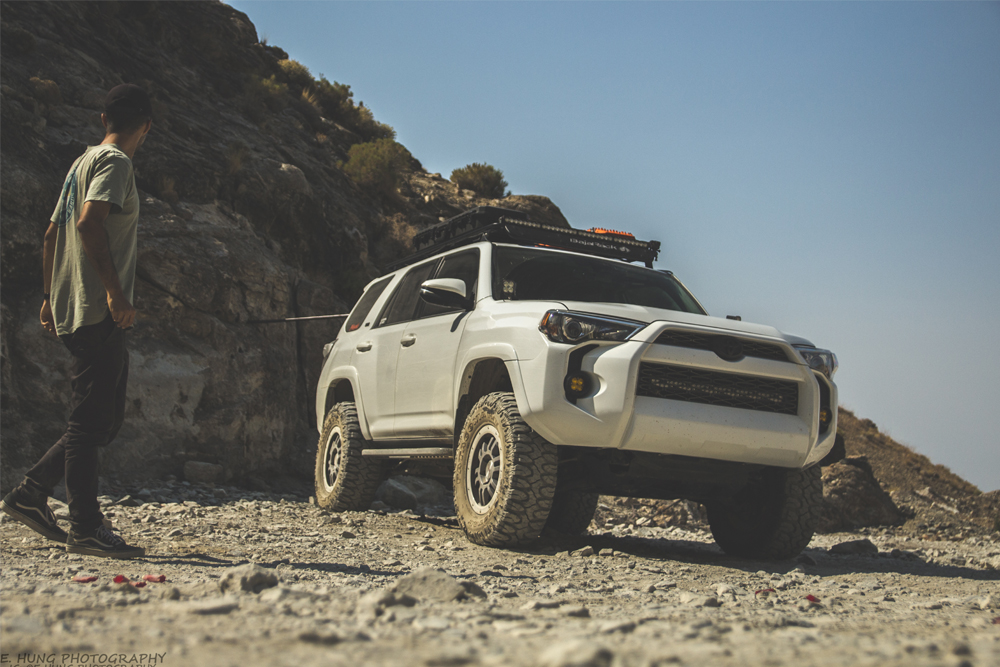 Anyone who spends enough time behind the wheel in the driver’s seat will agree that tires are the most important aspect when it comes to vehicle performance.

Those who off-road enough will also tell you that a set of tires can make or break your day while you’re out there. Problem is, big brand tires are extremely expensive (especially more expensive when you go up in tire size) and for people who wheel on a weekly basis (like me), spending north of $1.2K every so often would be a big, big problem. Especially during COVID-19 when people’s livelihoods are negatively impacted.

Upgrading From the Goodyear Wrangler Duratracs…

With my Goodyear Wrangler Duratracs reaching 3 years and 40k miles of service that consisted of desert running, crawling, and snow wheeling, it was time for new tires.

Don’t get me wrong, the Duratracs were great; they handled everything extremely well but due to their old age and high mileage, there were lots of missing chunks resulting in loss of traction while crawling at the end of my 1800 mile expedition to Moab in September 2020. Plus, I’ve been wanting to go 285 profile instead of sticking with the stock 265 profile for a while, so I figured it was time for an upgrade when I returned from Moab.

I had a few requirements to meet when I was in the market for new tires: 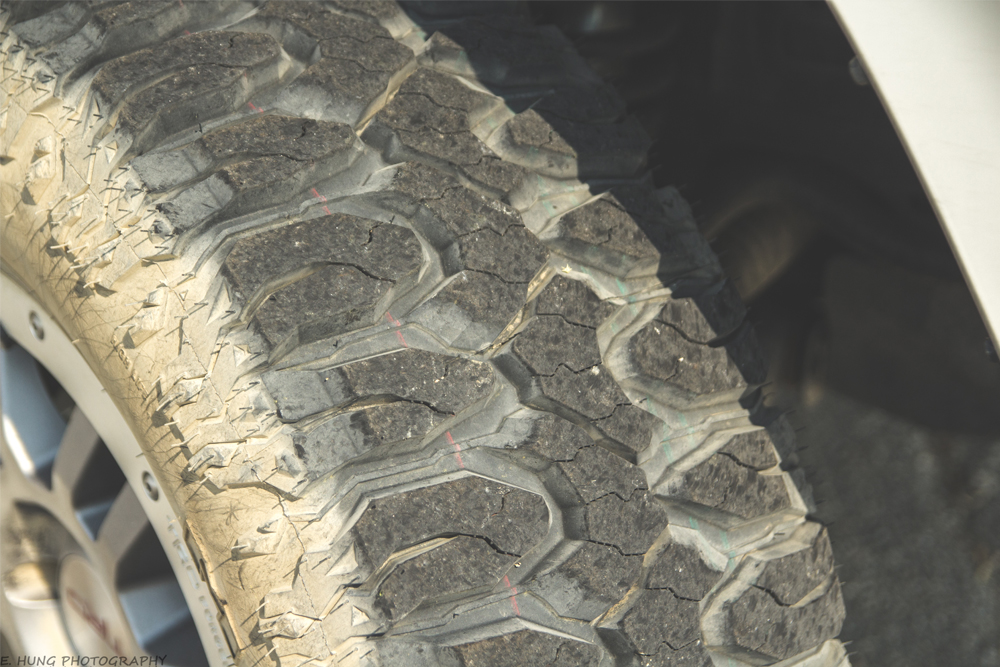 My friend at Miyaki Motorsports (@miyakimotorsports) recommended the Milestar Patagonia M/T after I returned from Moab and I brought up the tire situation while he was changing my oil. He said that he’s been running those on his personal 4×4 for years and they’ve performed extremely well, even in snow.

On top of that, these are more affordable compared to the big brands that people usually go for. After that conversation, I looked up the Patagonia tires and decided to give these a shot.

The features that sold me on the Patagonia Tires were: 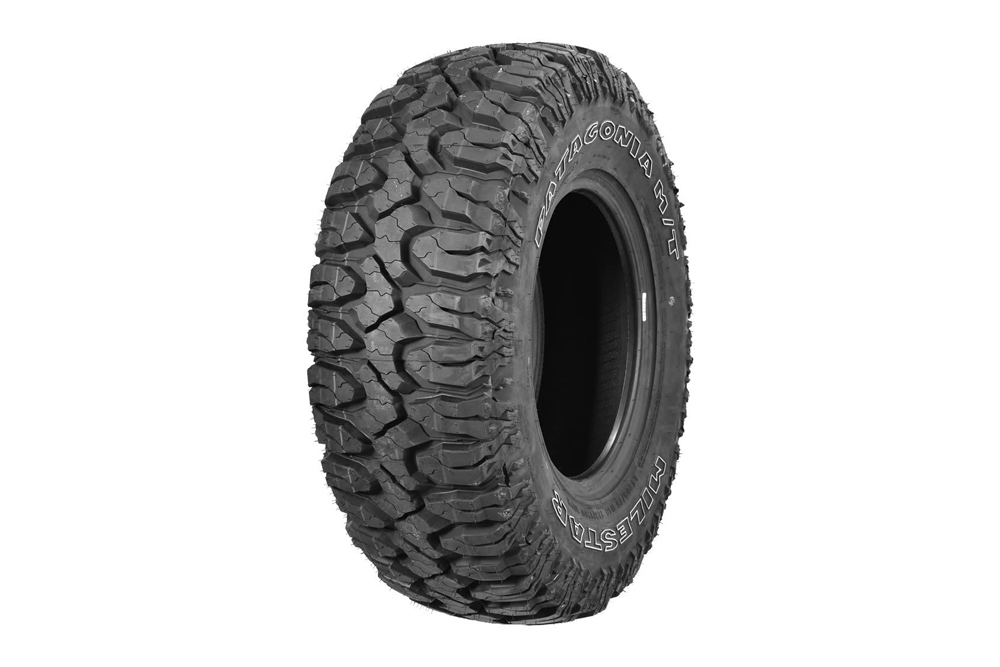 Upon inspection, the Patagonia M/T looks way more aggressive than the Goodyear Wrangler Duratrac A/T that I had. 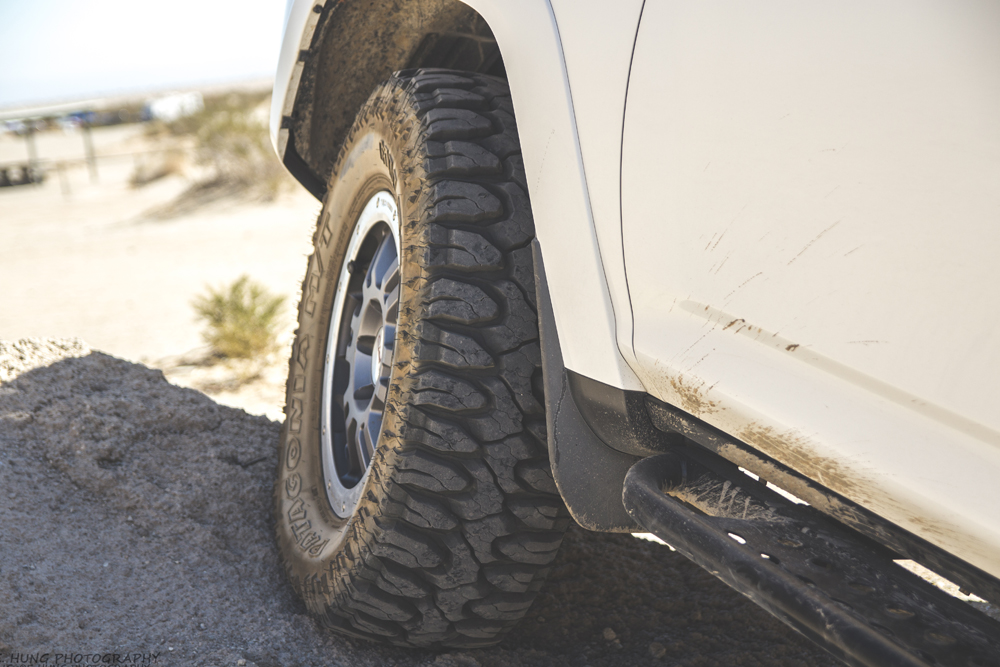 Installation is simple – have the shop install them for you!

However, as Brenan explained in the Biggest Tires on Stock 4Runner article, going 33” is a questionable fit and will require a lift, else you will suffer from massive rubbing issues and potentially break something on your rig. For me to run these 33” tires, we had to push the fender liner in (as detailed in this write-up by Brenan) and cut into the front mudflaps where tires and mudflaps touch.

No other modifications or adjustment was needed for me to run these on the trail. 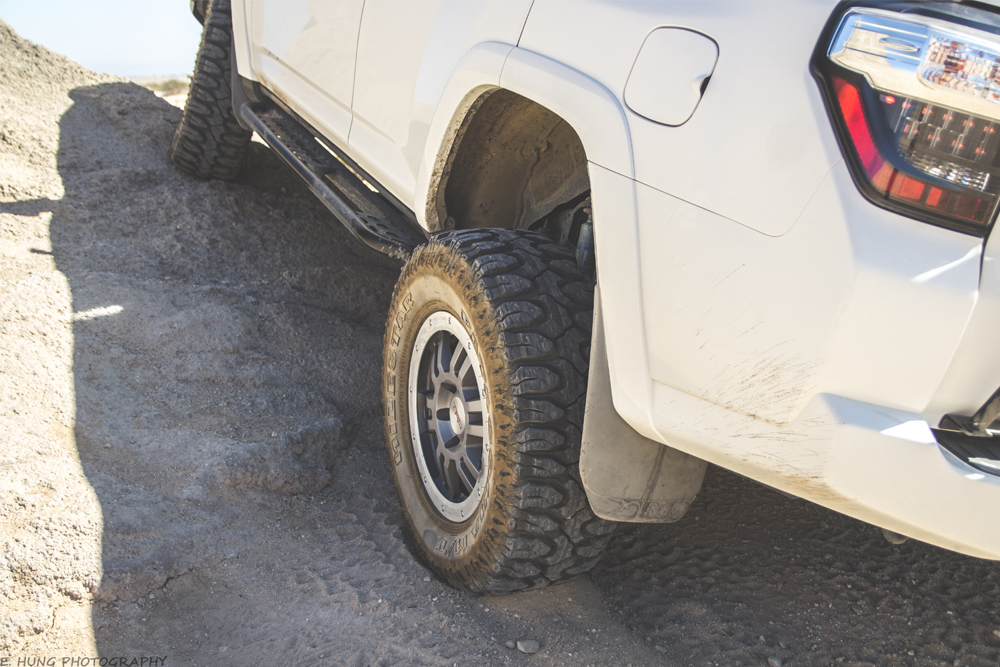 As previously mentioned in my BMC High-Performance Drop-In Filter article, my 4Runner is also my daily commute vehicle.

Despite wheeling it every weekend, 80% of the miles accumulated are from pavement driving and the on-road aspect was the first thing I noticed. People say mud terrains are noisy, but not these; I’ve put over 2000 miles on this set of tires through the pavement, sand, water crossing, and crawling since I bought them…

Below are my impressions of each aspect of driving:

These are QUIET on the pavement. I expected road noise on M/T as people always complain about it, but I’ve heard no road noise whether I was going speed limit or doing 80MPH. All I heard was the wind noise coming from the stuff I put on my roof rack. I am extremely impressed. Handling wise, I am now able to tackle turns at speed without braking too much or hearing tires scream. The tires just grab the road surface!

There was no slipping on the tire at all. The tires grabbed on to the riverbed and propelled the rig forward just like it was on dry land.

Crawling at 18PSI, I did Paiute Canyon Road in Lytle Creek, CA in 2WD. There were sections where we had to go through rock gardens and boulders, and the Patagonias handled all those like a champ in 2WD. I did not get stuck at all and there was no slipping while crawling through boulders. 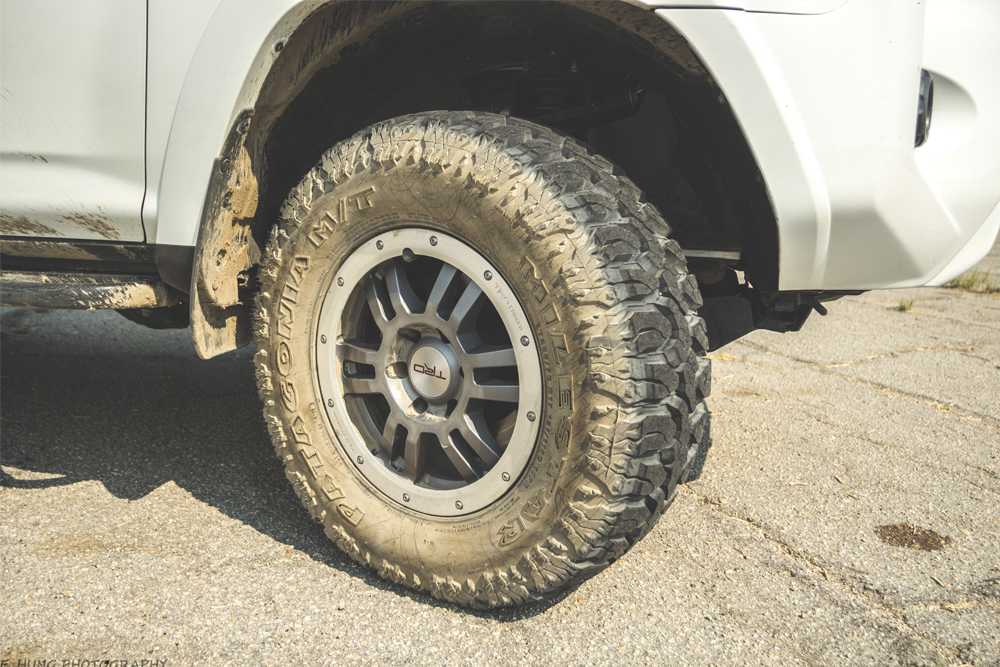 Consider how impressed I am with the performance of these tires, I would urge my fellow 4Runner owners to consider these when shopping for new tires.

You should give these a shot if you are looking for a set of off-pavement tires that: 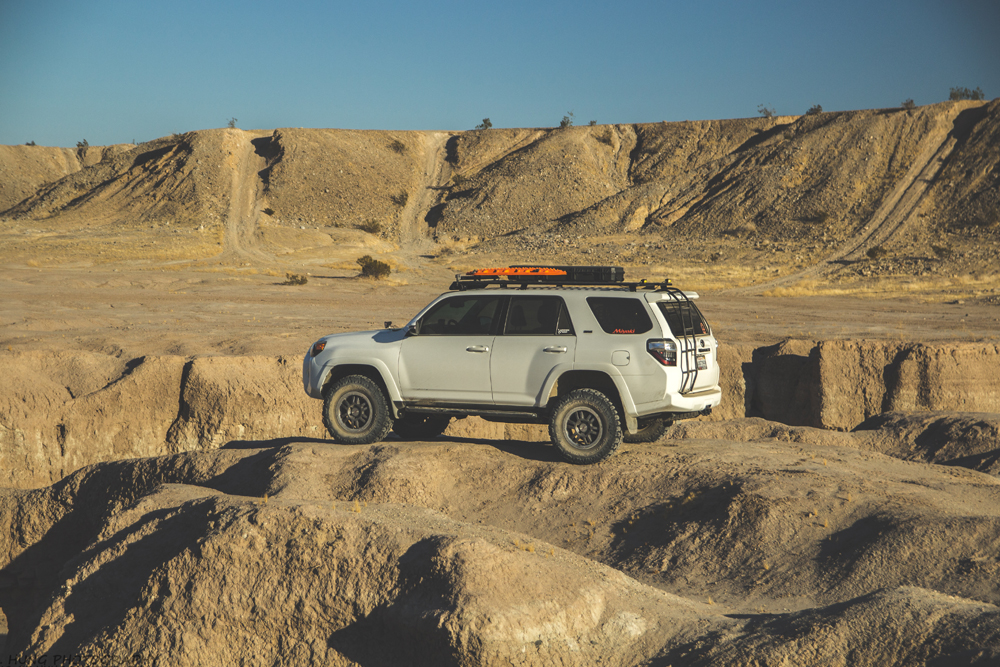 I’ve yet to test these out in the snow since it’s only October and snow season does not start in Southern California until late November or December. I will send an update once they see snow. 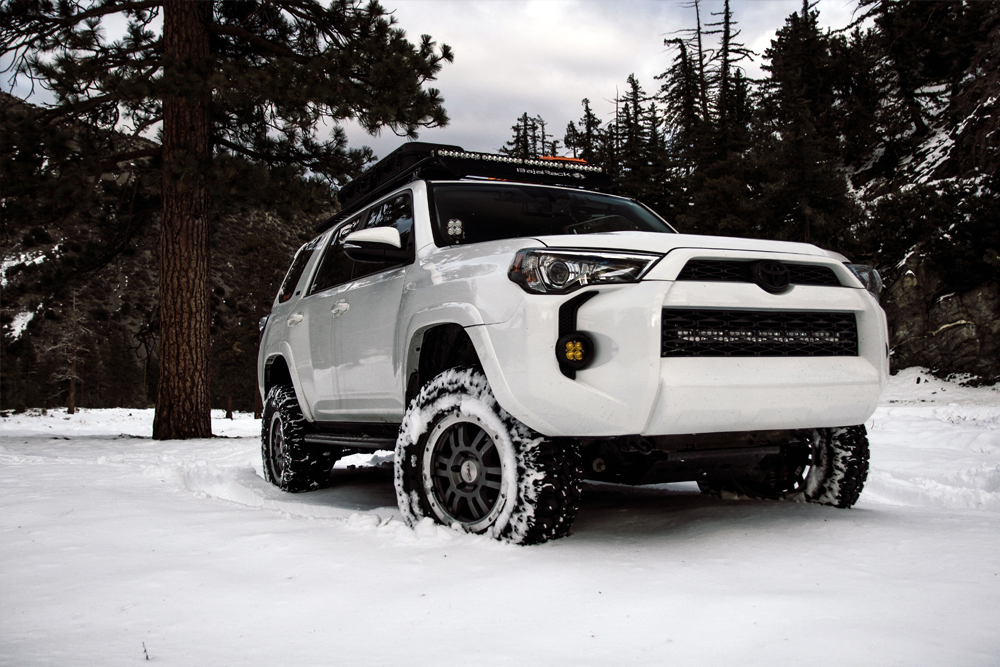 We enjoyed 2 days of rainstorm here in the sunny SoCal, which also meant higher elevations enjoyed a lot of fresh white powders. Because the storm didn’t happen until Monday, I had to wait a couple of days before heading into the snow to test out these M/Ts; which turned out to be a good thing because I was able to see their performance in both ice and snow. Talking about killing two birds with one stone. 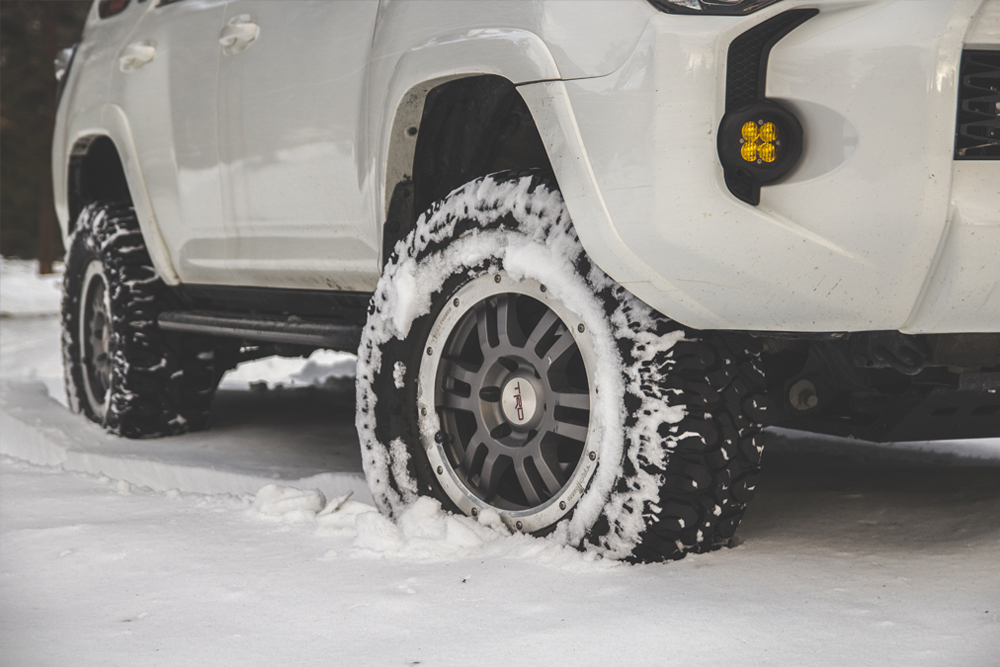 I was worried about getting stuck in powdery snow and losing traction on ice, but none of that happened. I even tried intentionally getting stuck in the snow by flooring my gas paddle to dig myself in, but the tires just kept on propelling the truck forward. I then stopped on ice and tried to break traction, but that attempt failed miserably as well. These tires just kept me going and going. 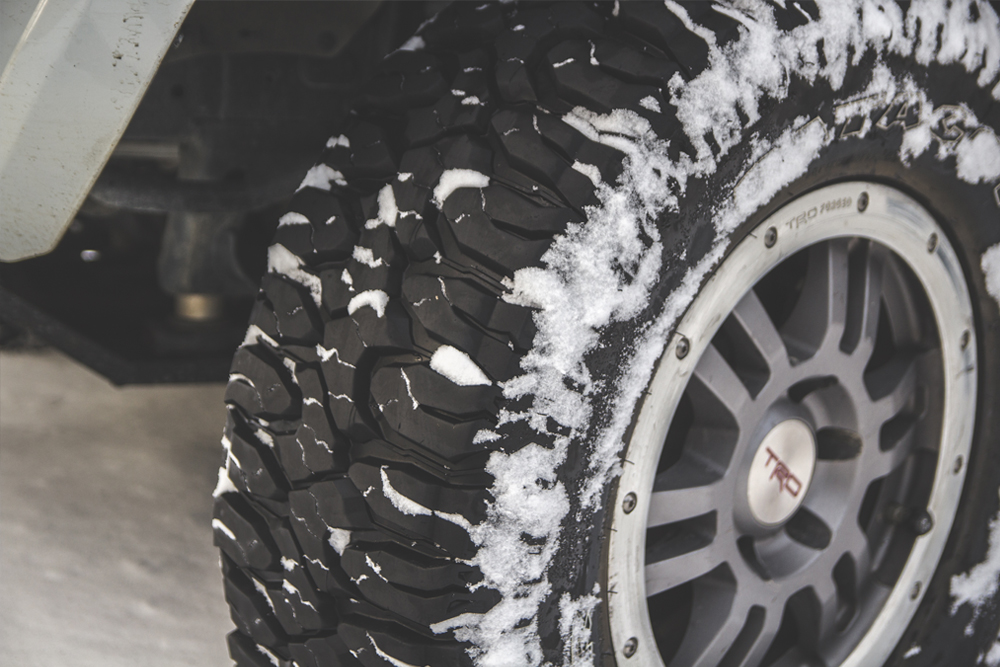 These tires are not exactly brand new when I took them for a snow run. I’ve put over 5000 miles of crawling, high-speed desert running, sand carving, and commuting. Yet, they still performed as well as my friend’s A/Ts. If you’re holding out on purchasing these because you’ve heard M/Ts are not suitable for snow, rest assured that these will not disappoint you. 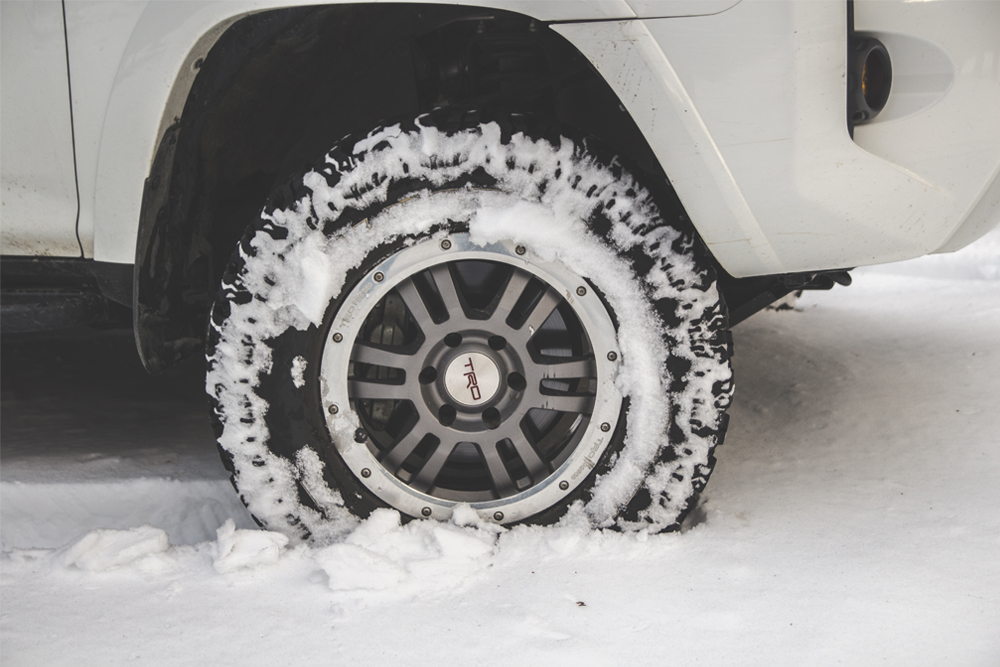 How are these tires holding up to mileage? Thats my main hesitation in buying them is wondering how treadlife is.

hey Will sorry didn’t get notification about your question. I swapped them out a little bit over a year after I got them. I had some cupping issues on the tires and I wasn’t sure if it was due to misaligned suspension or tire issues. In addition, being constantly abused on the trail almost every weekend, the treads went fast. I would say without constant abuse they probably could last about 20-30 k miles or so, and with my constant abuse they only lasted about 10k-ish miles.

I’m running a set of 35’s on my 85 Toyota pickup and so far I have no complaints. I was also very impressed with how quiet these tires are. I’ve always ran mud terrains on all my trucks and this is by far the quietest ones. Great Tire 👍🏽

How do these perform in rain? Any hydroplaning issues or do they channel water well? I have ridge grapplers now which have always been a bit tricky in the rain

Hey Brent,
These perform great in the rain. I was actually coming down the trail yesterday when it started raining, then hailing, then snowing (in middle of May in SoCal!!!) and these performed great both on and off road. Maintained grip the whole time and in turns. I was not worried about losing traction or anything coming down the mountain.

Awesome, thanks for the info!

Eryck, what psi do you run these at on the road? I just got a set from Simple Tire and have had a huge issue with balancing. Tried to get them road force balanced due to steering wheel vibration, and 3 out of 5 measured above 39 lbs of road force. I’m running them at 35 psi, so I’m wondering if that is contributing to the vibration and the balancing issues.

Hey Ryan,
I am unsure what could contribute to the vibration and balancing issues; I didn’t have any problem with that.

hey Mike!
Yes! I was able to fit the 285 spare in the stock location. Did so without any problem or trimming at all.

Is it me or do these appear to be running a bit small, at least in width for a 285/70? Most of the time you see a 285 on a stock width wheel there is always ballooning of the sidewall and the tread is always noticeably wider than the wheel itself. It’s more pronounced on the 7″ TRD wheels but still shows on a 7.5″ like the Trail wheels or the TRD Forged shown above.

i’m not sure to be honest. Even when I look at my friend’s KO2s I don’t notice a difference.

Thanks, I’ll check them out.

yes the wheel size will not be a factor. I went from 265/70R17 to these 285/70R17 using the same TRD Rock Warrior wheels. Specs for these TRD wheels should be the same as the wheels you currently have.

Great review Eryck, I just had one question for you. Do the 33’s fit on your 4runner with just the fender liner and mud flap modifications? I see in the article where you say stock (suspension) 4runner, but from looking at your photo, it looks like you have some upgrades.

Thanks for the positive words Charles! I am lifted 2.5″ front and 2″ rear, and I need fender liner and mud flap mods to not rub.

The only references to the stock from my article were the 265s that I had (stock sized tires) and the article by Brenan “Biggest Tire Size on Stock 4Runner.” I think I forgot to add the fact that I said my suspension was the same because it was lifted while I was on 265 Goodyear Duratracs (the setup has been on the rig for so long I completely forgot about it being there).

Generally speaking, if you want to do 33″, a lift is needed; how much to trim and if BMC or realignment is needed will depend on your setup. I’d recommend you to take it the shop I went to (Miyaki Motorsports in El Monte, CA) for them to take a closer look at your setup and go from there.