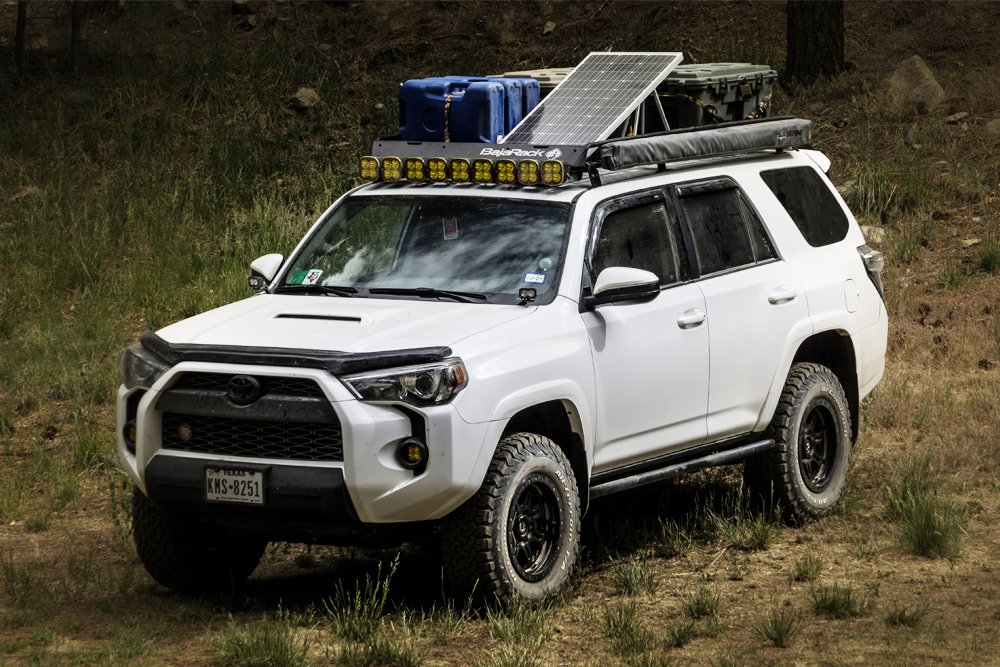 In preparation for a trip to Lincoln Nation Forest for 9 days, I wanted to install some sort of solar setup on my 4Runner.

My normal trips were just weekend trips where small battery packs were enough to keep devices charged. With this 9-day trip planned, I needed more than just a few battery packs.

For me, the solar setup will be used to power the following devices on or in the 4Runner: phone, tablets, Baofeng batteries, cameras, GoPros, compressors, and other small devices.

How The Setup Works 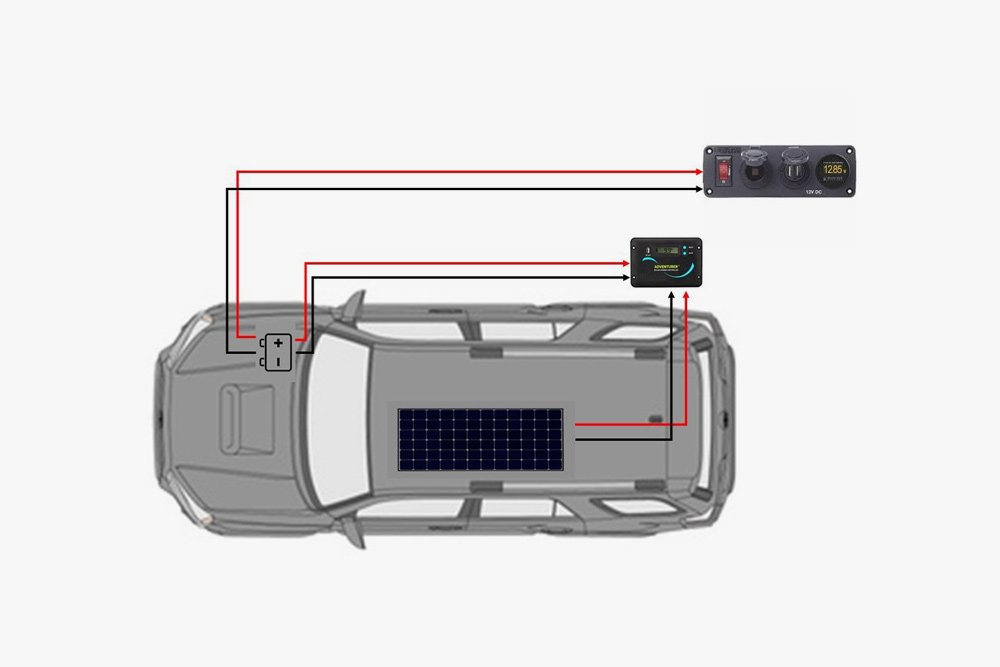 Here’s how my setup shakes down:

The setup is pretty straight forward. The first thing you want to do is mount the Renogy 100-watt solar panel on your roof. Then run the 100w mono solar panel to the Renogy Adventurer-30A PWM Charge Controller, which is mounted on the Rago Fabrication Molle panel. Next, run the charge controller to your secondary battery. Then finally run your auxiliary power unit to the secondary battery as well. 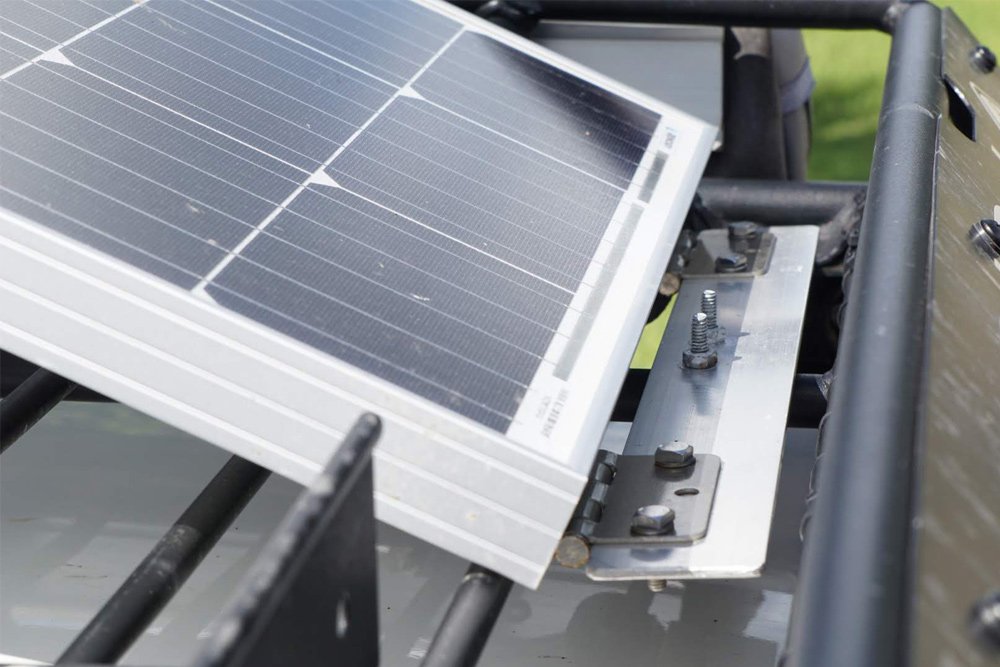 I fabbed up some aluminum that I got a Lowes along with some door hinges u-bolts and latches. The aluminum was cut to match the short side of the solar panel so it would have a place to mount once attached to the rack. 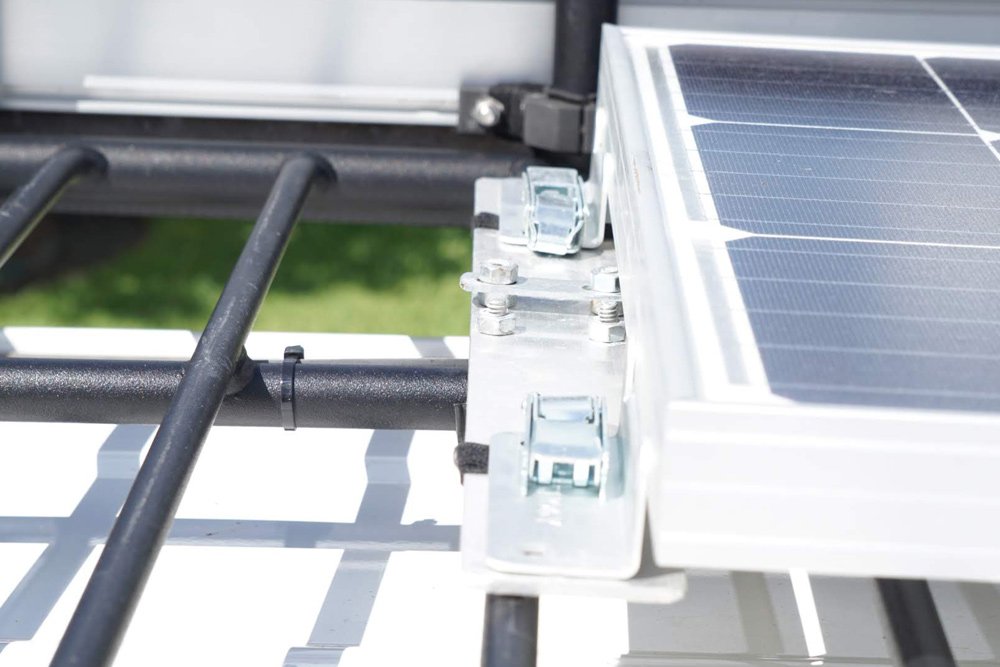 On the opposite side, I used the factory mounting brackets provided by Renogy that mount to the solar panel.

I used this bracket to mount latches that would secure the panel to the aluminum plate. I used pop rivets to secure the latches, but you can use the provided hardware or self-tapping screws.

The latching aluminum plate I used 2 u-bolts to secure it to the roof rack to prevent the mounting plate moving/ leaning forward or back.

With these latches on one side, I am able to quickly deploy the solar panel and prop it up when at camp to get maximum sunlight.

Propping It Up With a Small Tripod 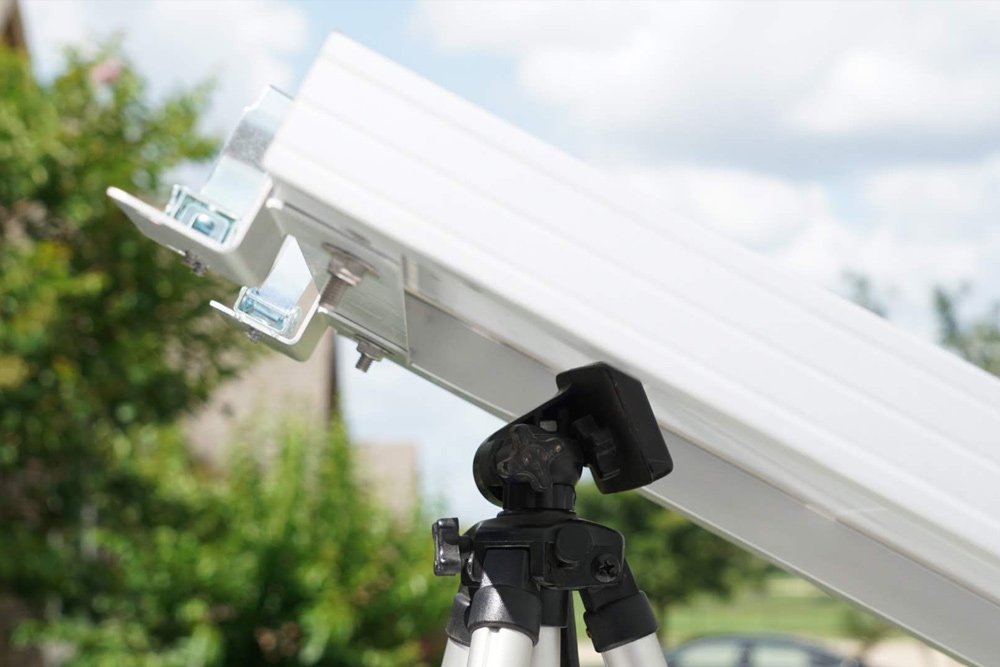 After the solar panel was installed, we needed to run the wires to the controller.

Note: Make sure to label the wires you are running.

I labeled my wires with a black zip tie on the negative wire to the controller. I ran the wire down on the underside of the rack, and into the back hatch rubber boot, sealed with 90min sealer. Once inside, I pulled back the roof headliner to run the wires to the passenger side near the taillight.

Because I have the Rago Molly Panels in the rear, I decided to Dremel the plastic where the aluminum spacer is to accommodate 4 wires running to the controller. This kept us from making ugly holes elsewhere.

Now that we had the wires inside the 4Runner, it was time to run the aux power unit and the + and – power from the battery to the solar controller. I followed these steps provided here.

I ran the exact same aux unit and mounted it in the same location as shown in the link above, the only additional steps that I did was run 2 extra wires that power the solar controller.

Pro tip: One tip is that I ran the wires up and over the cubby. Behind the grey and black plastic just below the rear window to the rear passenger’s taillight. Unlike in Step 5C where he runs it down and under. 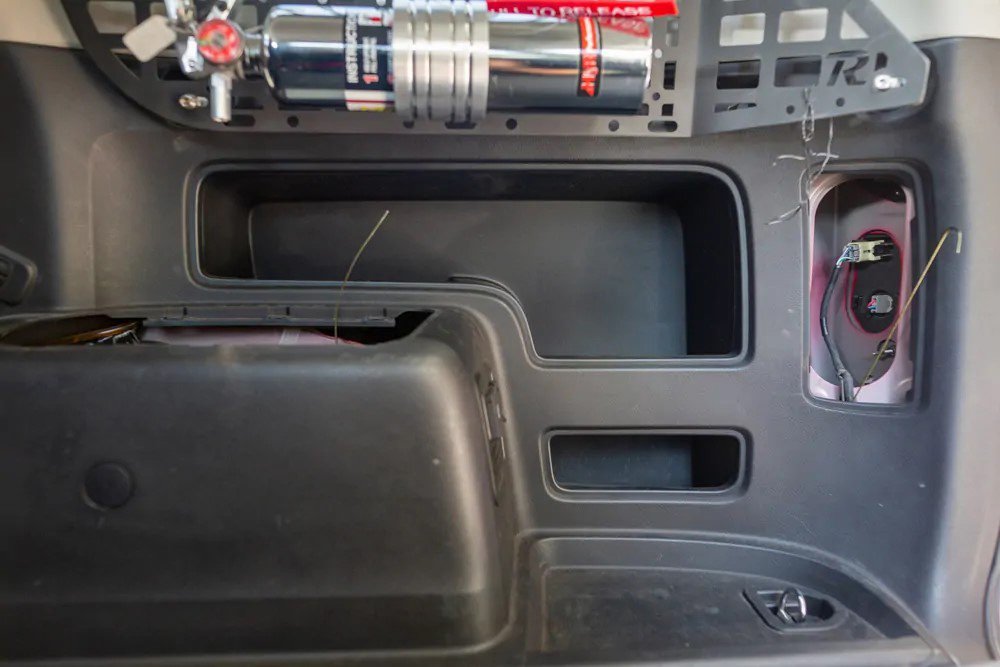 Renogy states to plug the Battery (+,-) to the controller first before plugging in the panels (+,-).

Following the Renogy instructions, you will see a battery signal charging when all systems are nominal. 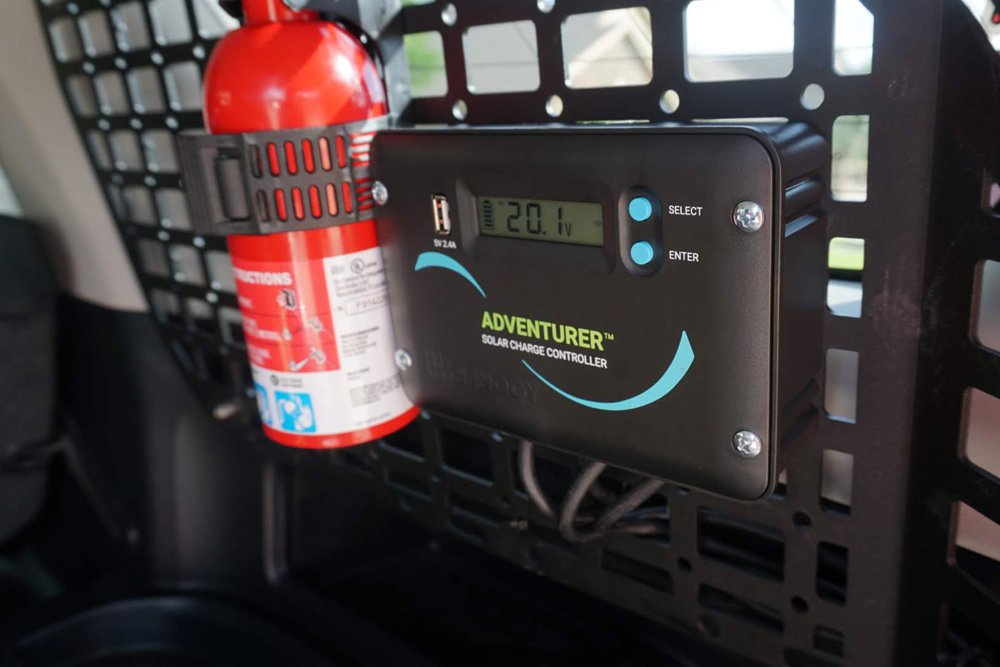 My controller came with a Bluetooth unit that you can plug into the back of the controller to see outputs on your phone as well as more detailed information about your consumption. The setting for an AGM battery is GEL. An AGM battery cannot be equalized.

Applying a periodic equalizing charge brings all cells to similar levels by increasing the voltage to 2.50V/cell, or 10 percent higher than the recommended charge voltage. An equalizing charge is nothing more than a deliberate overcharge to remove sulfate crystals that build up on the plates over time. – Battery University

Now that the solar panel was charging the battery, we can now utilize the aux power unit. Connecting the + and – terminals to the battery we can then power on our aux unit and begin charging phones and devices.

Having this setup was vital to my trip, the system worked flawlessly and charged up quickly.

I used the battery to power my compressor to air up all 4 tires for the entire trip as well as charge cellphones and cameras overnight. The lowest I have seen the battery get was to a 78% charge before going to bed, but by 10 am the next day, the battery was at a full charge, and that was in the shade.

This system was carefree for the whole trip. I would prop it up and forget about it. I had no need to reposition the vehicle to get maximum sunlight, it charged in shade better than I expected because, for 5 nights, we were surrounded by trees with only brief spats of direct sunlight around 11 am. Granted I wasn’t running a fridge for the trip but the system performed greater than I had expected. 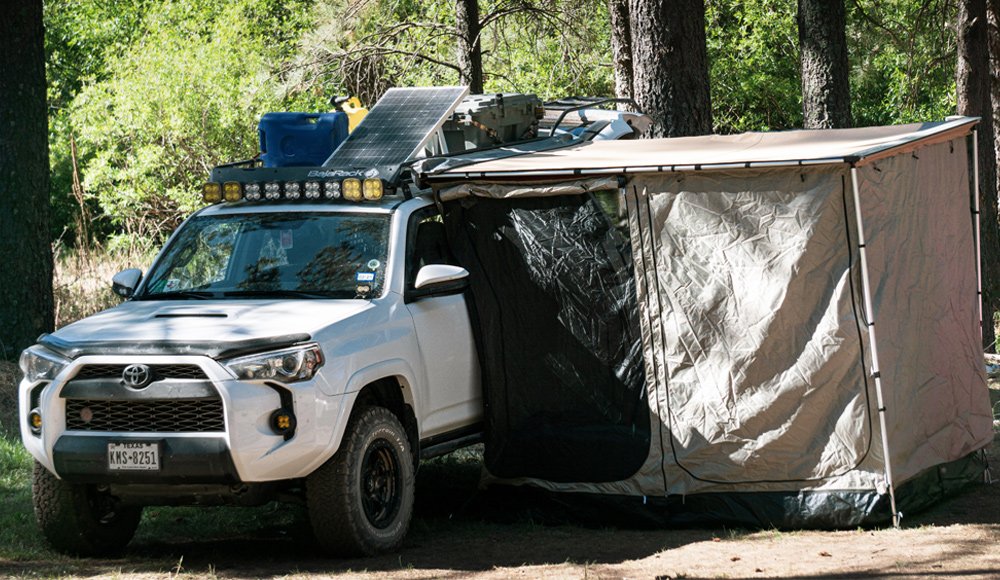 I’m super impressed with the Renogy Panel and OGE Aux Unit. Maybe one day I’ll get a fridge and see what it taxes on the system but, until then, this panel is amazing.

I have a great passion for anything car/truck related. Just went from the race car life to the lifted life and enjoying every moment and every adventure!

Exactly what I am needed to do!
What type of battery did you use? I am looking into this set up, my trips are usually 4 weeks long but I am only needing to charge small devices, maybe run a small heater during cold desert nights.

How did you route the wires from the rack the back hatch rubber boot? Do you just have it looped over the spoiler or is there some nicer way to tuck it into structure?

I tucked the seem where the tailgate meets the roof, then its wired through the rubber grommet.

lol – while I REALLY like this article and find it super helpful….. assuming you weren’t paid to do it or given free product and only receive revenue from your affiliate links which I totally support – this cracks me up that you took the time to find a way to power devices that camping is supposed to take us away from. lol. But I do indeed enjoyed the article.

Can we see a more detailed pic of how the latches were attached and where you bought them?

Aj, I bought the latches from Lowes. link is up above in the article. The latch is just mounted to the factory Renogy brackets, then the latch “locking” part is mounted to the aluminum stock that I have mounted as a baseplate.

What type of battery did you use? Li Ion, or Lead Acid?

Just a standard group 34 Super Start Premium battery, Which doubles as my main battery in my daily driver when not in use for trips.

Awesome, detailed write-up. What do you think the max amp draw would be to keep it indefinitely charged, assuming you had full sun?

To tilt or not to tilt. Well, there goes my weekend.

I wonder if this mesh with the Genesis Dual battery system?

Awesome!! Was wondering if anyone else out there was doing the same thing.

I’d find a way to put a bracket in a semi-permanent position to have a better hold of the panel when in a tilted position. That, or attach a telescoping support. I’ve had some freak gusts before that have blown over things you would not think could be moved by just air. The flat underside of the panel is just asking to be used as a sail. Something’s gonna give if that happens.

Having the panel definitely makes fridge-life much easier. I’m in Arizona, so before the panel, I’d have to run my truck for a half hour or so a day to juice up my 2nd battery enough to keep the fridge running, starting on the 2nd day of the trip once I reached my destination. Now, the solar keeps it running for days on end. I did do some testing over several trips, and here are some observations I noted. When parked in the shade, the fridge runs less overall, the ambient outside of the fridge is cooler, and there’s less direct radiation on it if I choose to leave the tailgate up. That said, there’s also a bigger dropoff in how much solar radiation is collected and passed on to the battery. I’ve noticed that parking in a sunnier location makes the fridge run more frequently, but the solar charges the battery much better, and in the long run, it works out better for me to park in a less shaded area and collect all those sweet UV rays.

I just made myself a second cable, this one much longer (50 feet), that I can use to connect my panel to my controller. It’ll be the best of both worlds that way: park in the shade, take the panel off the roof, and place it in direct sunlight. It simply requires you to make a removable connection at the panel and the controller.

I know what you mean on the freak gusts of wind. I like the tripod because its something I always leave in the truck for when Im out shooting pictures. I think I might use a small bungee cord to secure it from flipping when propped. can easily use the existing holes on the panel to latch into.

I like your idea of having the best of both worlds, one day I might need to make the panel more mobile once a fridge is added. I always try and park the rig facing north so that way I can collect the sun all day if the rig is stationary.

Nice setup! I really like the canopy system you have posted in the last picture, is that a commercial product or something you built?

Anthony
Reply to  Stephen B

Like Franklin said its the ARB 2000 awining with the Room attachment. Only gets deployed when I know Im not moving for at least 3+ days, because it does keep you from moving. I love it to death tho as it fits my cot in it and gives me a place to hide when the mosquitoes get bad.

Franklin
Reply to  Stephen B

That’s an ARB room/tent setup that attaches to an ARB awning. It’s pretty neat if you’re chilling in one spot for a few days. It’s less fun if you wanna go on some short day-trips or little adventures, because you can’t move the car with it up, obviously. I’d say 5-10 minute set-up time, plus the time spent putting your stuff in (mattress, bedding, clothes, etc). So it becomes a bit of a hassle to take it down to go somewhere, then put it back up. It works wonderfully well off a teardrop camper, though! That is, if you need additional sleeping space, or some covered and enclosed space (good as a baby play room).

great write up and install. clean and simple. I like the idea too of the solar battery being independent of the charging system (maintaining that OEM reliability)

me too, gives me that extra peace of mind.