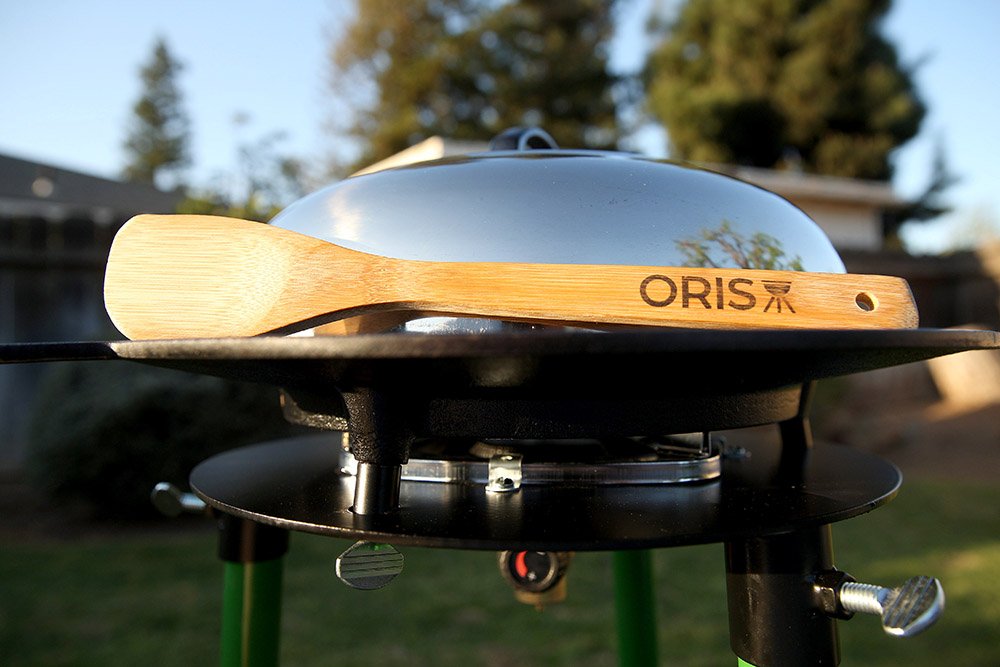 With so many options on the market, it might be hard to decide what the right cooking system is for your needs. Do you need a camping stove? A single burner? A dedicated kitchen? A Skottle style grille?

Depending on how you travel, cook and camp, portable stoves and grille units may benefit you. Some of these units more than others, but what if there was one system that could be you all-in-one solution? That’s where the Oris Skottle comes into play.

Oris is a one-man show dedicated to making the best cooking product on the market.

Oris saw a need for an improved cooking method, but one that could also be a multi-use unit. Whether you’re at home, tailgating for a sporting event, or off-roading, the Oris Skottle can do anything and everything you need.

Find it online at Skottle.com: 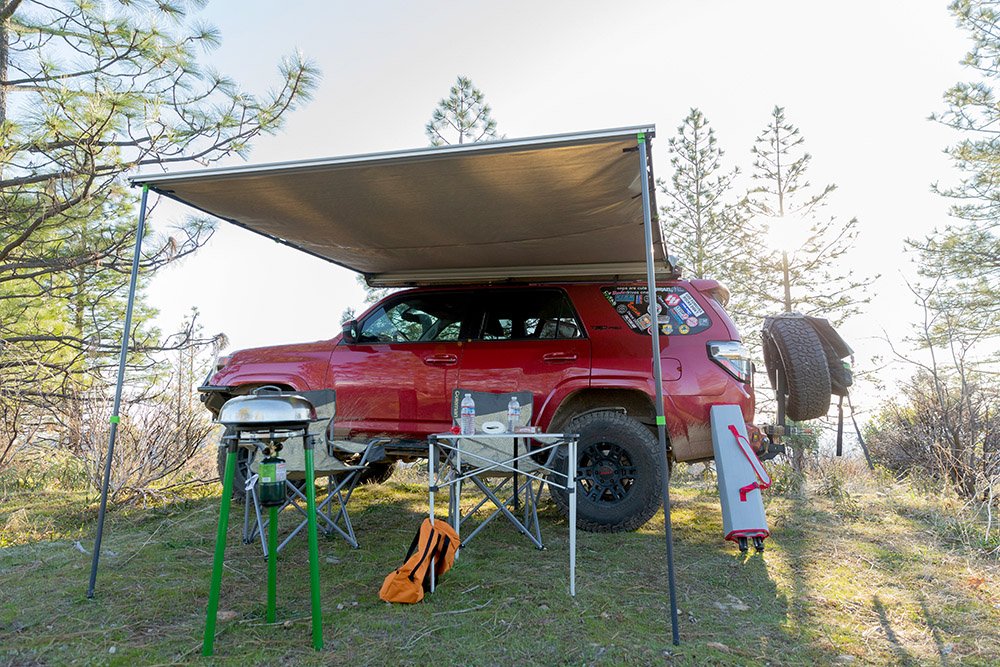 When I go camping for a quick overnight trip I normally keep it simple; hamburgers, hot dogs, something that doesn’t require the SnoMaster fridge to go with me, but rather can be made quickly and easily.

On longer trips things change a bit as you need food for three meals a day, for multiple days. Needless to say eating hamburgers and hot dogs that much can get old, and flat out isn’t good for you. That’s where I like to change it up and cook things like I normally would at home. Breakfast burritos, chicken and rice, tri-tip, fish, etc.

To make a lot of these things you normally would need something like a full-on kitchen, and because I’m not a full-time “overlander” a kitchen just isn’t practical to me. Not to mention would end up costing a few thousand dollars to build. Also, it would take up the entire rear of the vehicle, losing precious cargo space and adding substantial weight. And, as my 4Runner is a daily driven vehicle, that doesn’t make much sense.

Introducing the Oris Skottle. A complete kit that can not only cook everything you throw at it but allows you to use other items with it such as pots, pans, kettles, etc. The main thing compared to others on the market was the ability to cook on cast iron. 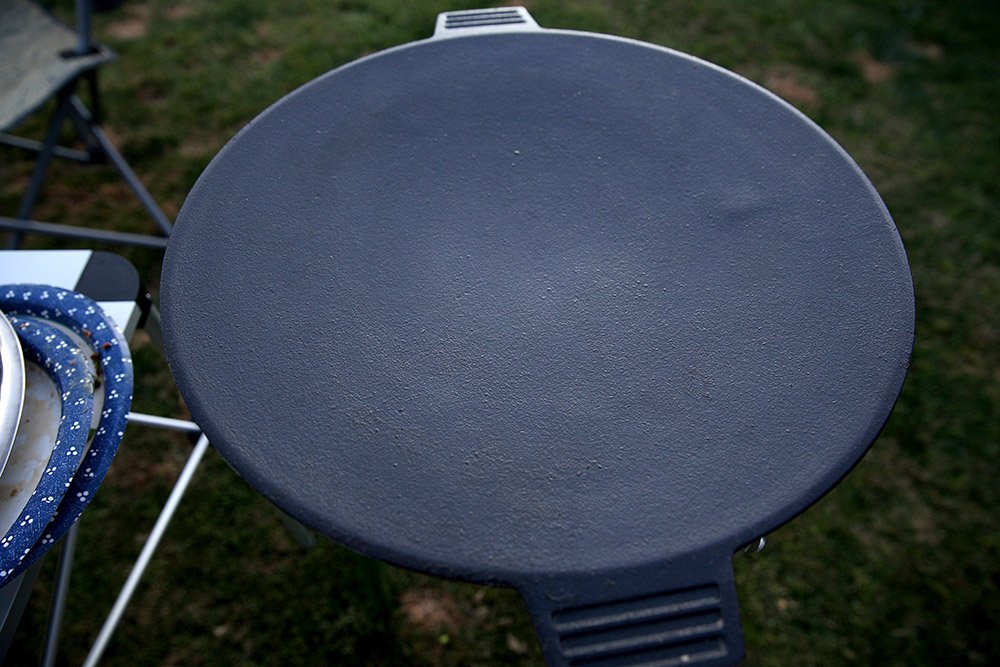 Growing up my parents cooked on cast iron a lot, and it was a material I learned to love to cook on. Cast iron is an extremely heavy and durable material.

This means if you happen to be clumsy and occasionally drop things it won’t break, nor will it ding or dent. On the contrary, it can do just about the opposite of everything in its way, so you’d want to not drop it on yourself or something else.

There are some things you can’t do with cast iron, but the main one is that you don’t want to use any sort of metal on the surface. Cooking something like hot dogs with a pair of tongs wouldn’t be the end of the world, but for other things, such as stir fry, wood or plastic spoons are a must! 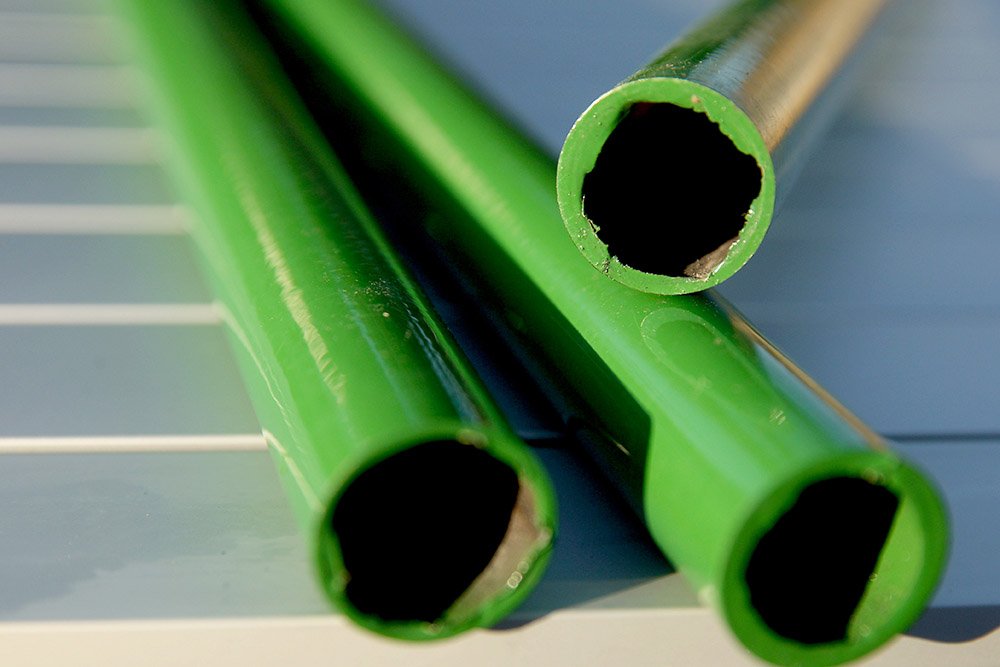 Unlike others on the market, the Oris Skottle weighs in at about 30lbs. While that is about double the weight of similar products, it’s important to note that the build quality because is much stronger as well.

Not only are the poles that hold the Oris Skottle up much thicker than the competition, but they are also taller. For those of you who happen to be tall like myself, slightly bending over can be nagging on your back for extended periods of time. Thanks to this taller design that is not an issue.

Keep in mind that while it is indeed heavier, it also is less likely to tip over — whether that be because someone accidentally hits it or because it’s windy. Wind or not you have to eat, and the last thing you want to worry about is a gust knocking over your meal.

One major standout is the ability to hold up to 150lbs! We don’t always want a steak for dinner, and that’s where your big pot of chili, soup, or stew can come into play. The Oris Skottle can and will support that big pot with no issues! 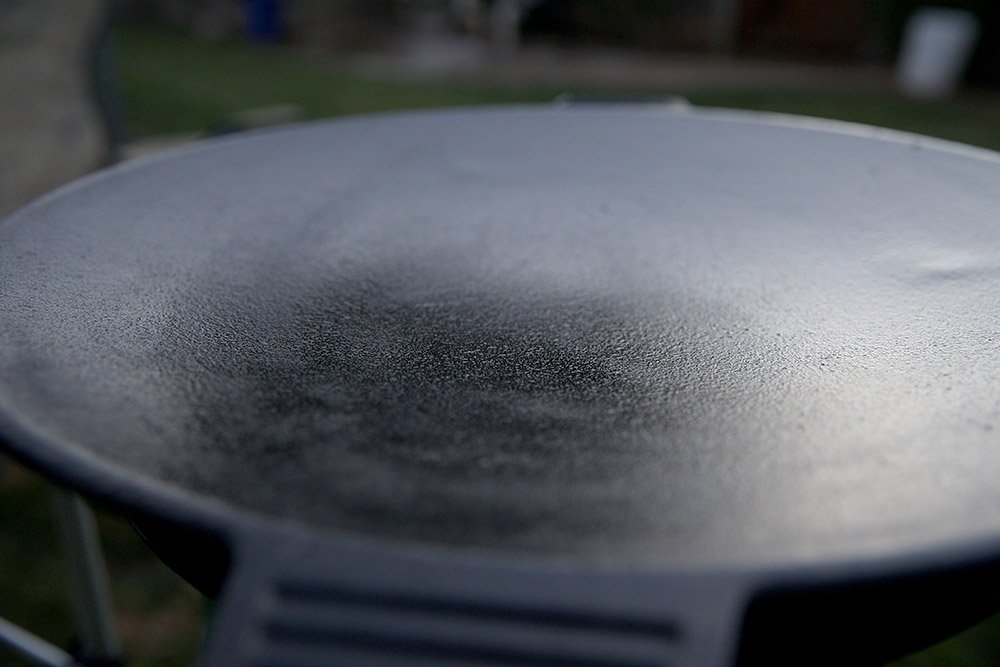 One thing that needs to be done with cast iron is seasoning. This ultimately adds a layer of “non-stick” to it, and over time will build more and allow an even better cooking surface.

Unlike steel, this coating does not leak chemicals or other things that can be harmful to you. In fact, cast iron is great for people who have an iron deficiency as iron is released into your food while cooking.

Thankfully the seasoning process is already taken for you by Oris, as their pans come pre-seasoned, however, if you happen to lose the seasoning coating it’s quite easy to apply a new coating yourself at home. 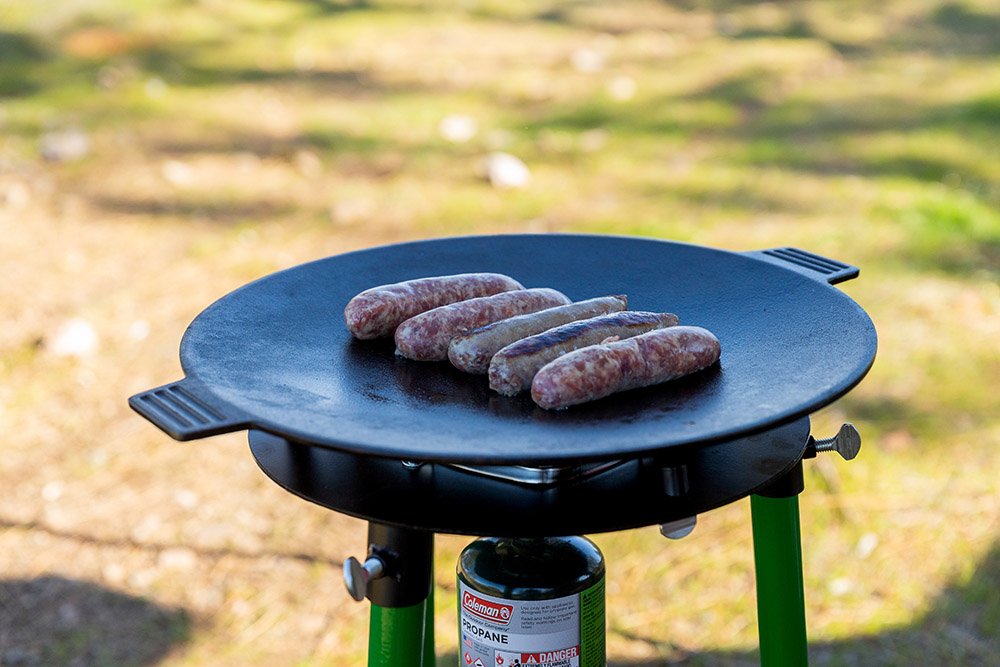 Unlike other items on the market, the Oris Skottle is nearly 100% flat. There is a slight curve to it for obvious reasons such as holding in food, but it isn’t wok style round like others. This gives it a range of unique features and benefits.
One happens to be the oil you use to cook. Whether it be for meat or vegetables, you want your oil to spread out evenly so everything can cook at the same time.

With other items on the market, you tend to get more of a puddle, rather than evenness. This means your vegetables are frying up at the same rate and same time, rather than only the centers sitting in a pool and the outers having none.

Pancakes usually require some sort of griddle or pan, but because the Oris Skottle is cast iron you not only have the ability to heat evenly, you also have a flatter surface that allows you to cook them and flip them without causing tears in your pancakes. 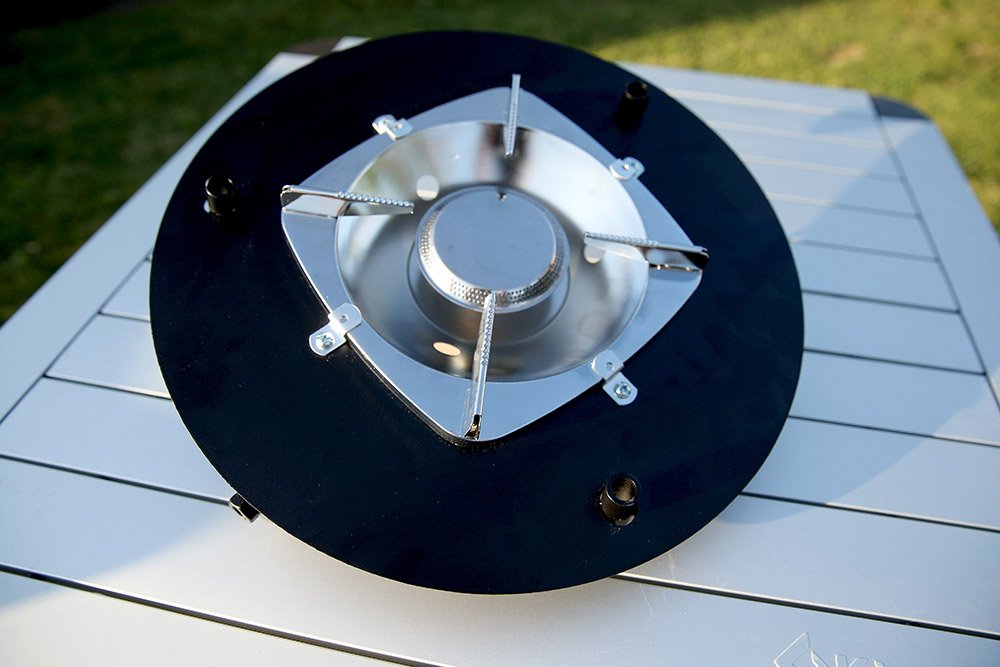 The functionality of the Oris Skottle may be my favorite thing about it all. The burner bolts directly into the stand and has the ability to cook just about anything on it thanks to its 10,000 BTU rating. While most people will use it for the cast iron flat surface, as that can literally cook anything you throw at it, what about other things that may need more of the burner style?

Others on the market may be able to still boil water in a kettle, or a small pot of water but can it support the weight of a big pot of liquid? This is great for something like chili on those cold camping trips. The Oris Skottle can tackle these tasks quite well.

This means if you want to boil a kettle of water for coffee before putting on your cast iron skottle you can, or if you want to make a pot of stew for dinner you can as well. The combination of the stand and the burner is a no brainer for larger, heavier meals that require pots. 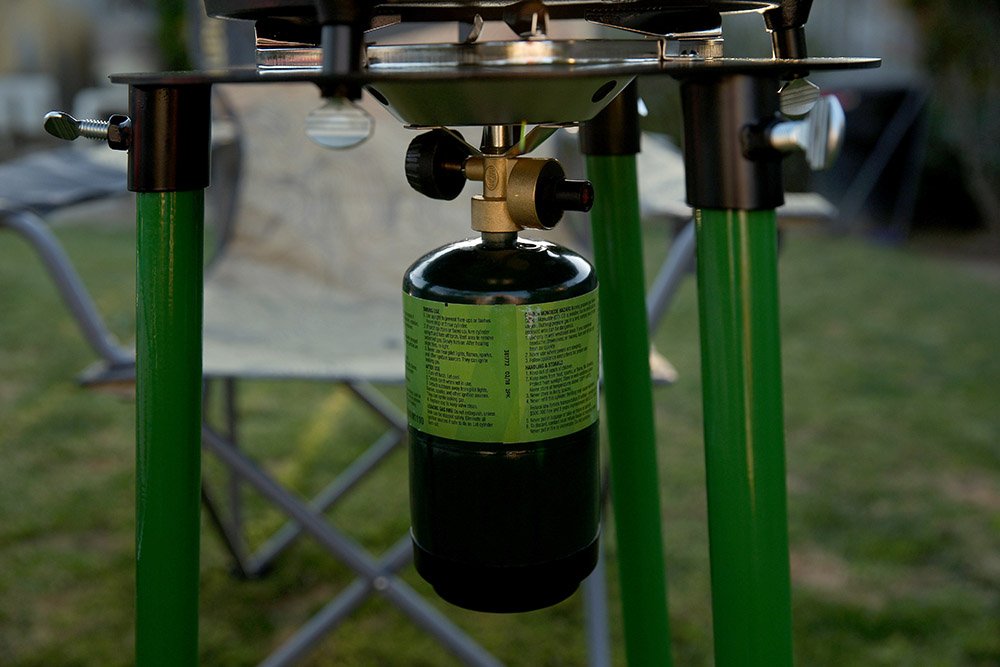 Whether you are going on a short trip and wanting to just take a small 1lb propane bottle with you, or a week-long excursion where you’ll need a propane tank, the Oris Skottle is able to accommodate both.

The skottle comes with the bottle attachment ready to go out of the box, however, for those who need a tank for much longer adventures, Oris has a propane tank attachment that will allow it to hook directly up to any propane tank. It is also made of stainless steel meaning it won’t rust and you don’t have to worry about a pet or critter putting a hole in it while camping. 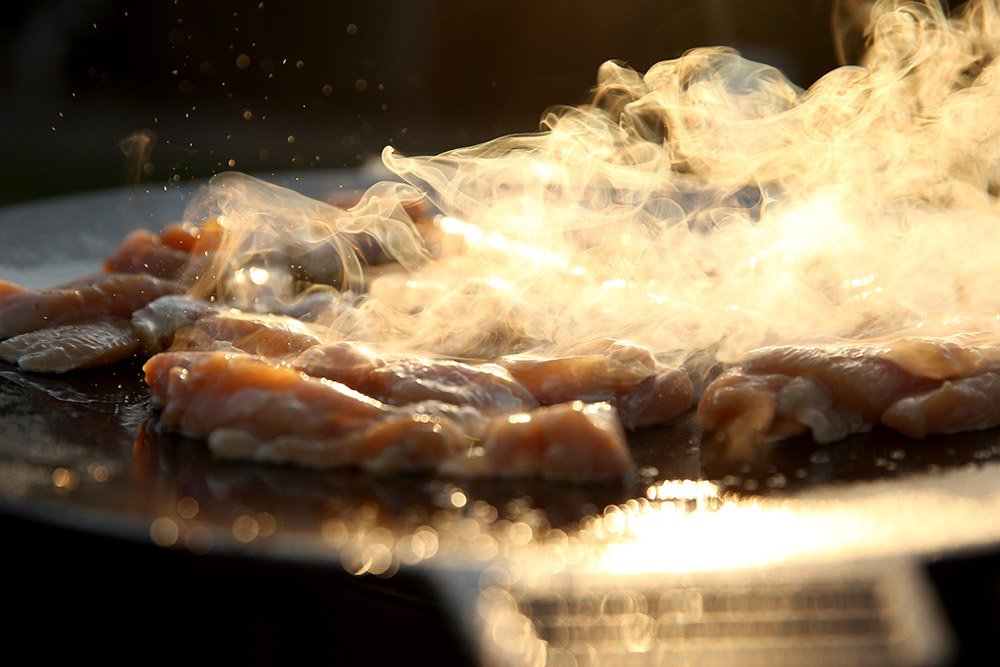 One of the biggest upsides to cooking on cast iron is that it heats evenly. This means there’s no “cold” spots on your cooking surface. When cooking dinner for multiple people you normally have a few pieces that cook slower because they aren’t directly over the heat. Or perhaps even cooking in winter where the pan seems to take forever to get warm.

Due to the cast iron heating more quickly and more efficiently you not only are heating your dinner faster, but are also using less propane for the entire heating process.

Because the Oris Skottle uses cast iron neither of those are a problem, as the pan heats evenly and quickly, leaving no spots on the surface that are colder or hotter than the other. With larger groups this is extremely convenient as normally everyone has a cooking job, and with cast iron it cooks meat perfectly, no matter how you like it cooked.

I have personally cooked a variety of meals ranging from Kung Pao Chicken, bratwurst, chicken fajitas, breakfast burritos, pancakes, and quite a few more. Not once have I had an issue with the cast iron not getting hot enough. In fact I think I was more impressed with it cooking my meals exactly how they always should have been cooked. 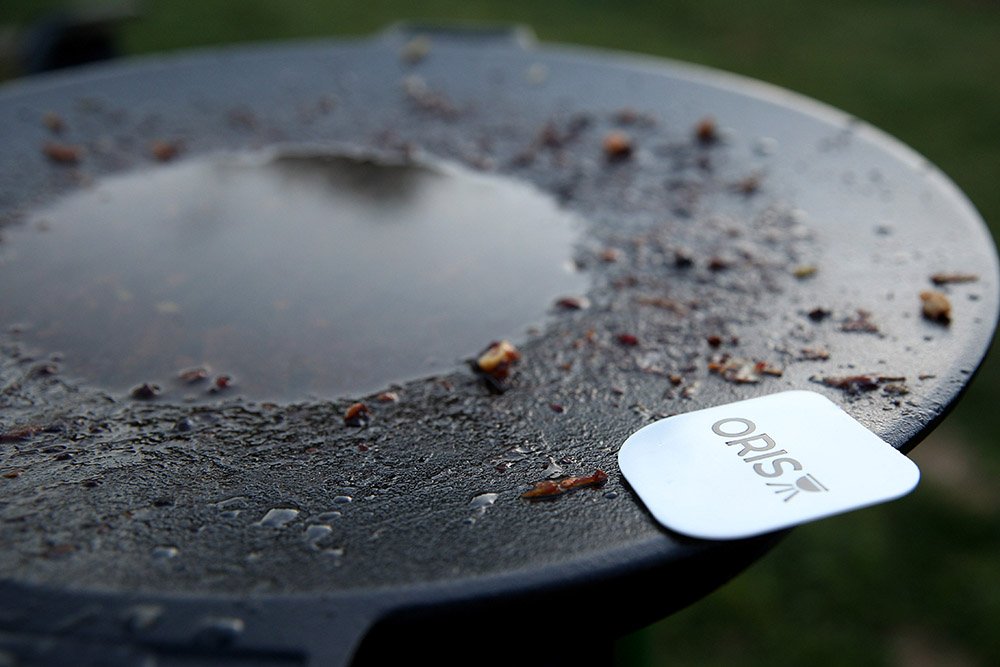 Cast iron is different than most cookware on the market and requires a special way of cleaning. This isn’t complicated nor hard, but people hear this and always steer away from it. Don’t be that person.

The facts are simple. You’re not supposed to use soap, nor steel wool brushes but rather a stiff brush made for cast iron.

All you need is water and a little vegetable oil to coat the pan once it’s done cleaning. The main thing to do is make sure there is no water on the pan, as it can and will rust.

Fits In The Bag 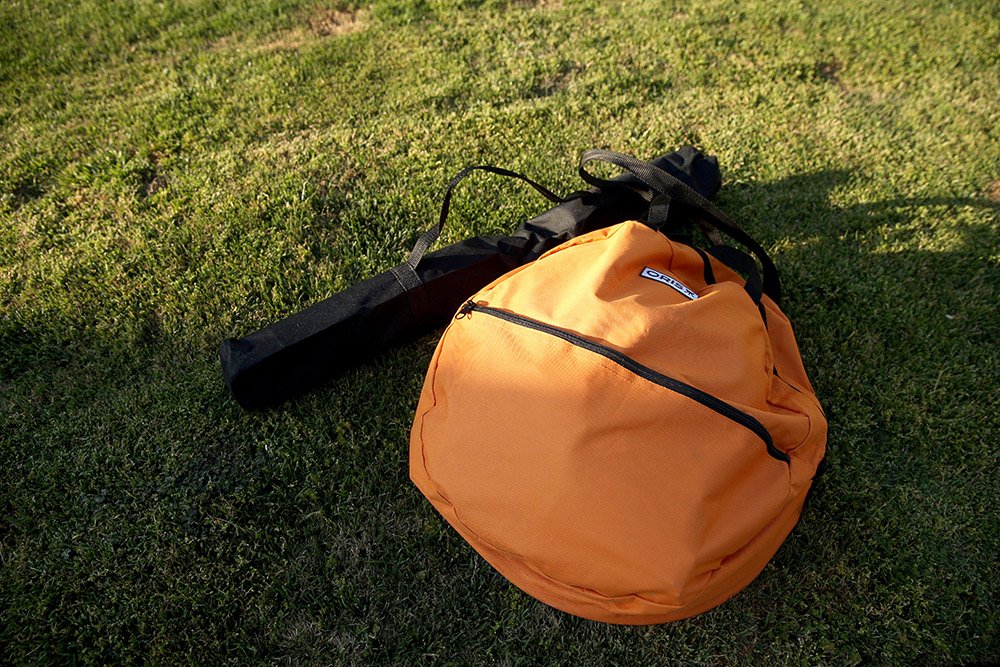 Everything fits in the bag! We’ve all been there, we buy something that comes in a bag or some sort of carrying case, but after using it one time it never wants to fit unless you do everything 100% perfect.

The Oris Skottle bag clearly took that in mind as everything fits in it perfectly, and it still has some room. That means if you buy extra attachments, such as the cleaning brush, lid, spatula, or propane tank hose, it will all fit with no problems.

There are a ton of good things to say about the Oris Skottle, but what about the bad? Well, there’s not too many I’d like to say. I’ve used the skottle quite a bit on trips and only found one thing that I could “complain” about.

That being the lack of a windscreen for the burner. While it is strong and can put out a powerful flame, in the wind it does tend to get pushed around, and though I’ve never had it officially burn out, I wonder if during stronger winds if it could become a problem. I would suspect this could be an attachment you could see from Oris later down the road. 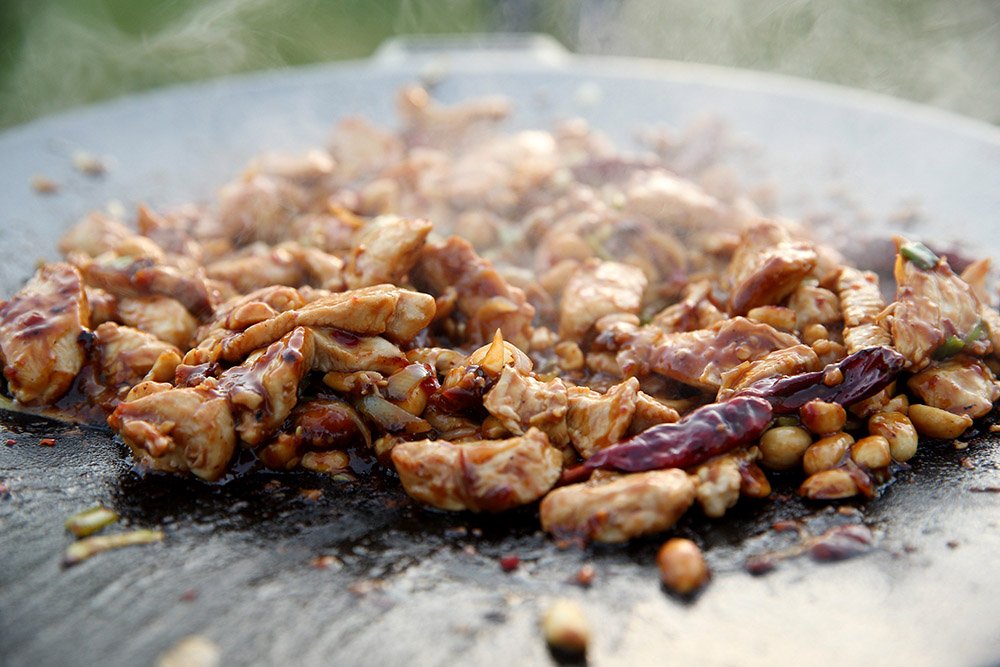 If you are looking for a cooking setup that covers just about everything in one kit, without the need of a complete kitchen, and more than just a burner, the Oris Skottle is the kit for you. Oris has various setups, as well as unique smaller features like bag colors to choose from.

This is without a doubt the easiest and best cooking setup I’ve used for camping, and don’t think I’ll ever replace it. With the current quarantine from the Coronavirus I’ve been able to put it to good use in both the back yard and breaks in the mountains. It travels extremely well, takes up little space, and gets the food nice and hot quickly.

This is the kit for just about anyone on the market looking to have a cooking setup that doesn’t break an arm and a leg, and can be used in various ways.

Great review! I just got my Oris Skottle last week. So far I cooked some fried rice and a pan of bacon and really impressed with the results. I am going to try and install a piezo ignitor and fab up a windscreen on mine.