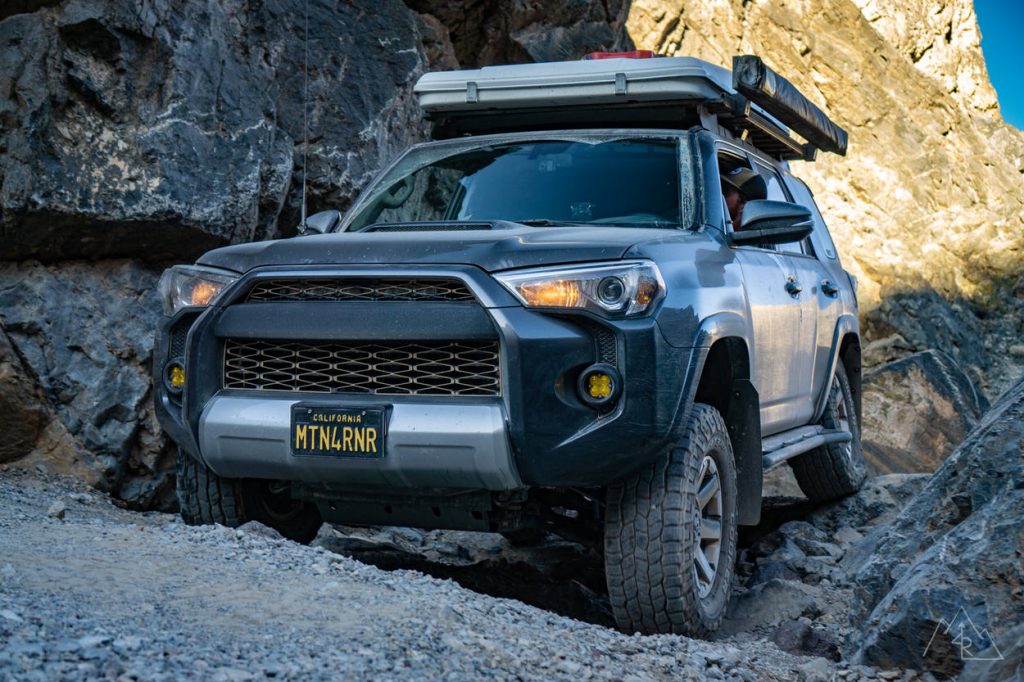 The dash camera has become a way of life for many daily commuters, backroads cruisers, and highway haulers. It wasn’t long ago that dash cams were for the “overly paranoid” and usually provided an image that was grainy and often made details unrecognizable.

In the growing tech industry, those cheap dash cams are becoming obsolete, replaced with some smaller models boasting better optics and more features. Leading the way in innovation, Garmin’s updated line of dash cams have upped the ante in a number of different ways.

They’ve given me one of their Dash Cam 66w units to install on the 4Runner. Let’s see if it stands up to our Trail Expectations. 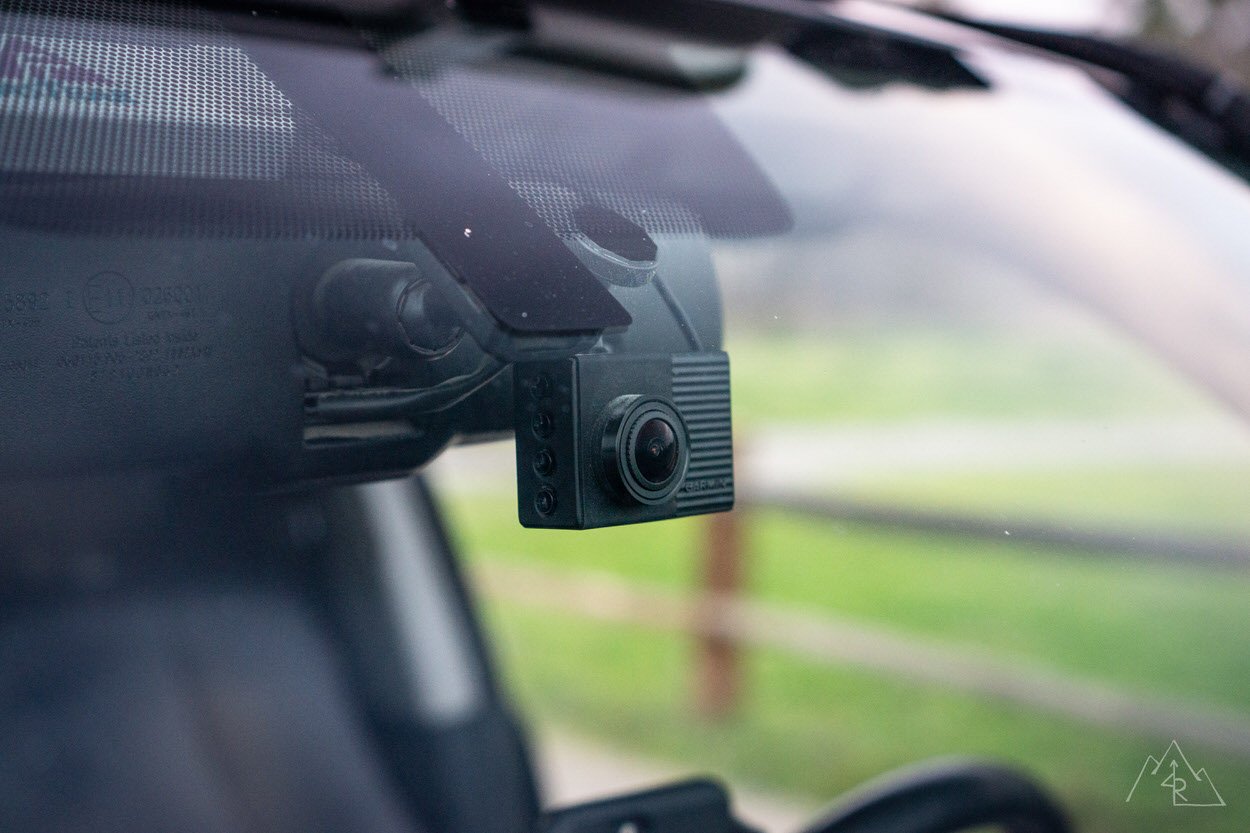 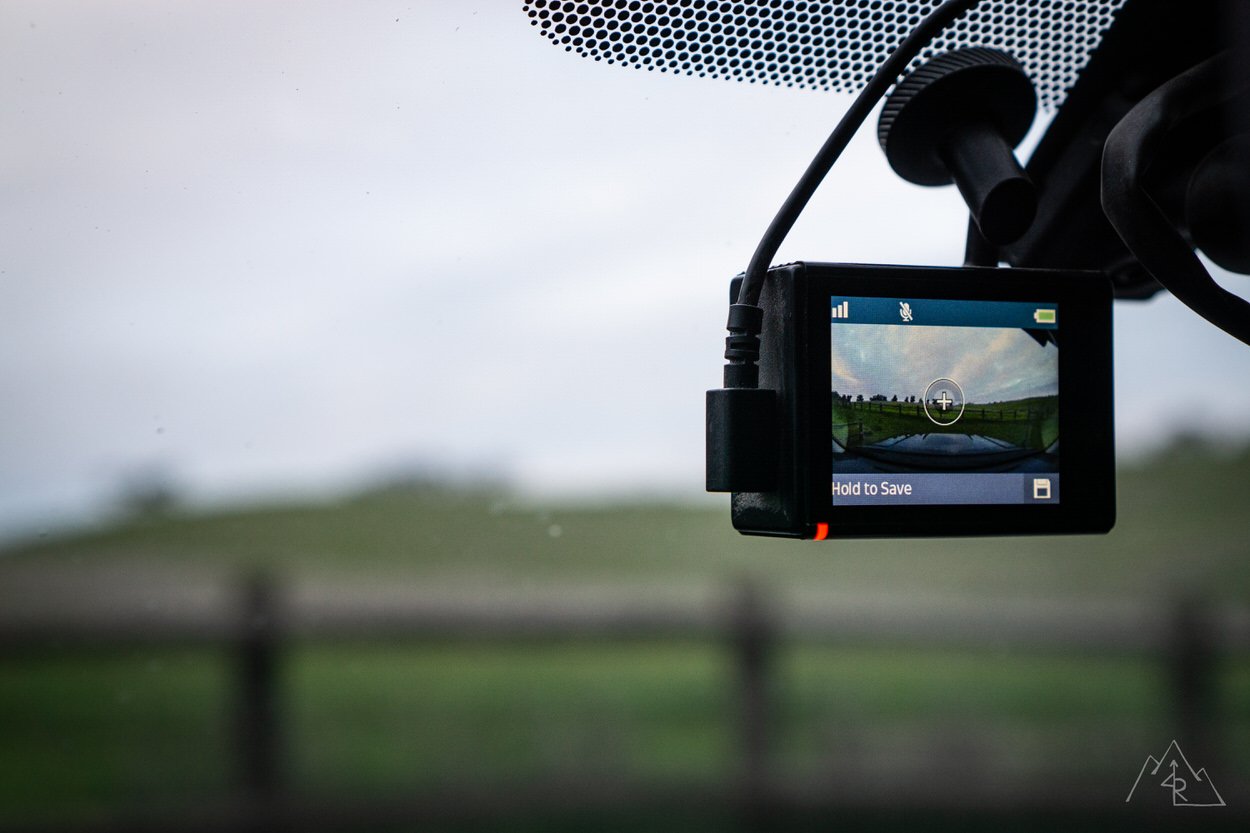 Why get a dash cam? 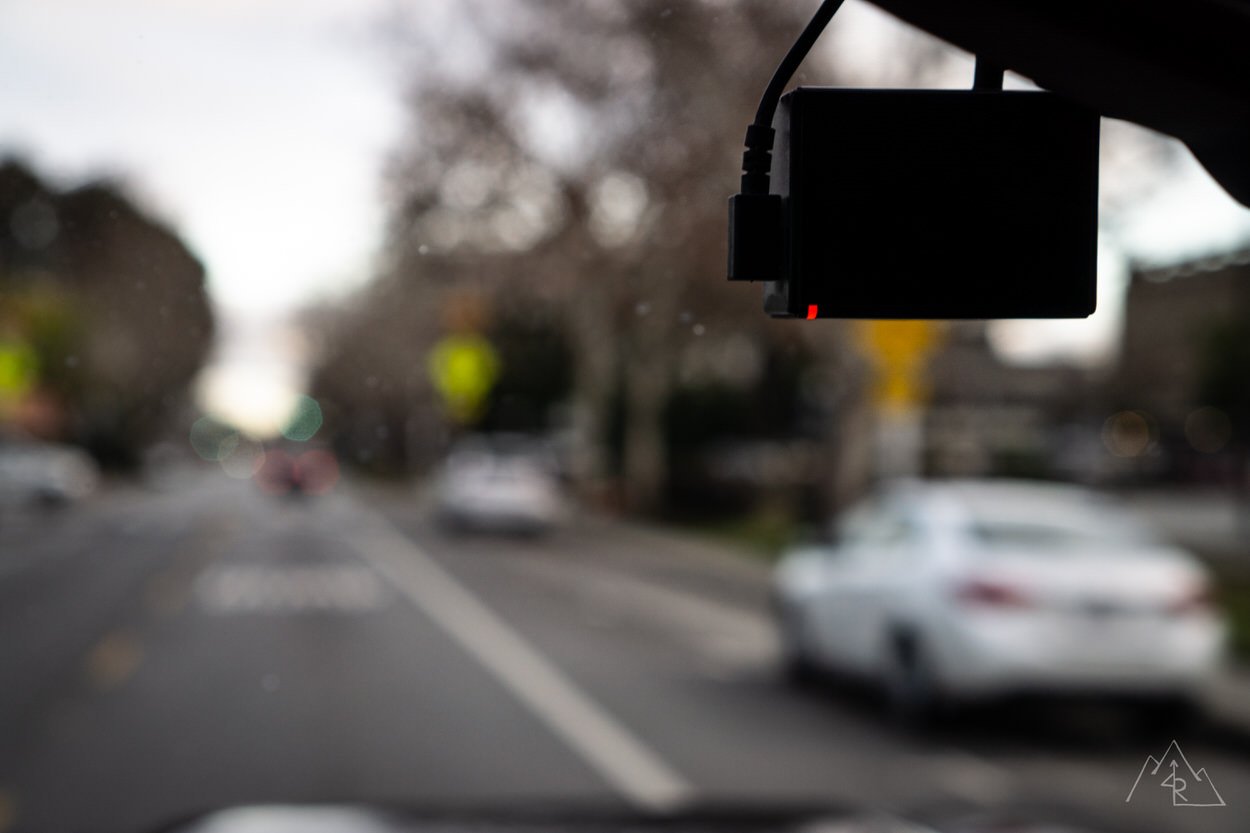 There are so many ways to use a 4Runner.

From the daily commuter to a weekend travel toy. For any occasion, a dash cam can prove beneficial to the owner by keeping a recorded eye on the road both while driving and when parked.

I wanted a dash cam for the 4Runner mainly to keep a record of any events that happen in or around the vehicle while I am in town or far outside of it.

Having this record gives you the ability to show or use the footage if needed to law enforcement or your insurance company. It could be the difference between you being ‘at fault’ or not in a collision with another vehicle.

More than a Dash Cam 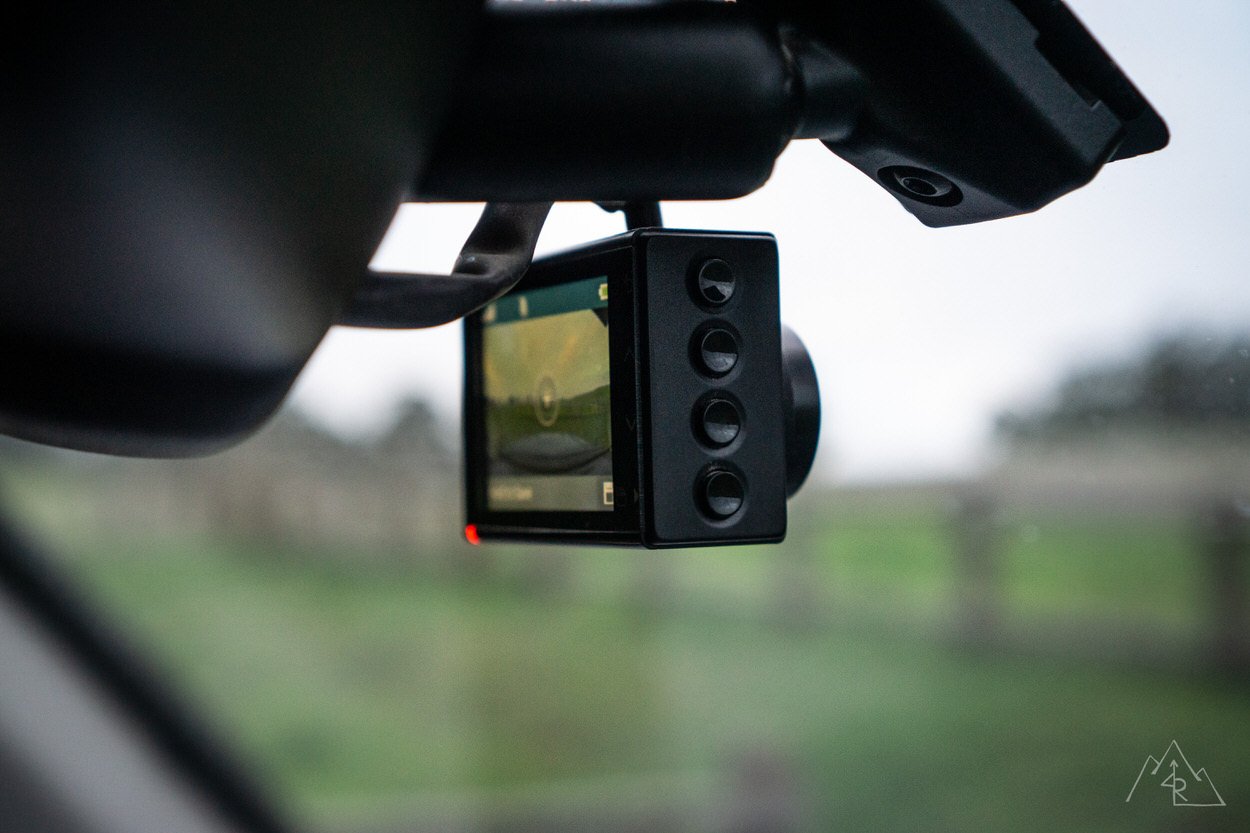 A dash cam doesn’t need to be limited to just recording video of accidents and roadside abnormalities (or meteors, if you’re in Russia). At least that’s what Garmin had in mind when they packed the 66w with a host of additional features.

“OK, Garmin.” That simple command can control the camera in a number of ways.

You can take a photo, save a video, start or stop audio recording, and create an on-the-fly Travelapse.

The voice control works very well and has no trouble understanding my voice, even with the windows down or music playing. This is a very helpful feature to keep your eyes on the road and hands on the wheel. 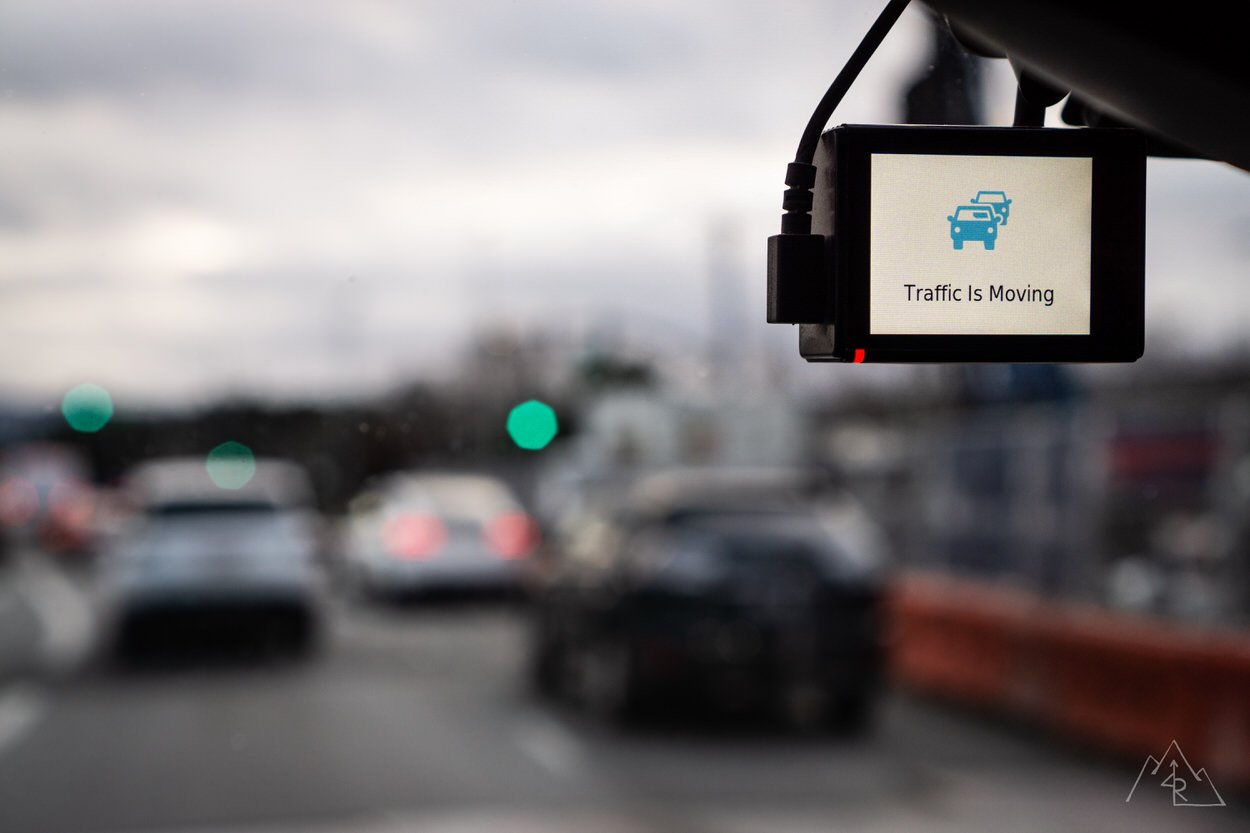 The Garmin is programmed to keep an eye on the road at all times, not just for recording.

One feature is monitoring traffic around you, specifically in front of you. When it detects that the car in front of you is too close, either while driving (tailgating) or while braking, you will get an alert on the screen with an audible alarm.

It will also tell you when the car in front of you has started moving at a stoplight in case you are distracted by something else.

Both features are rather helpful and are a good reminder for when you might be a bit too close to the vehicle in front of you. 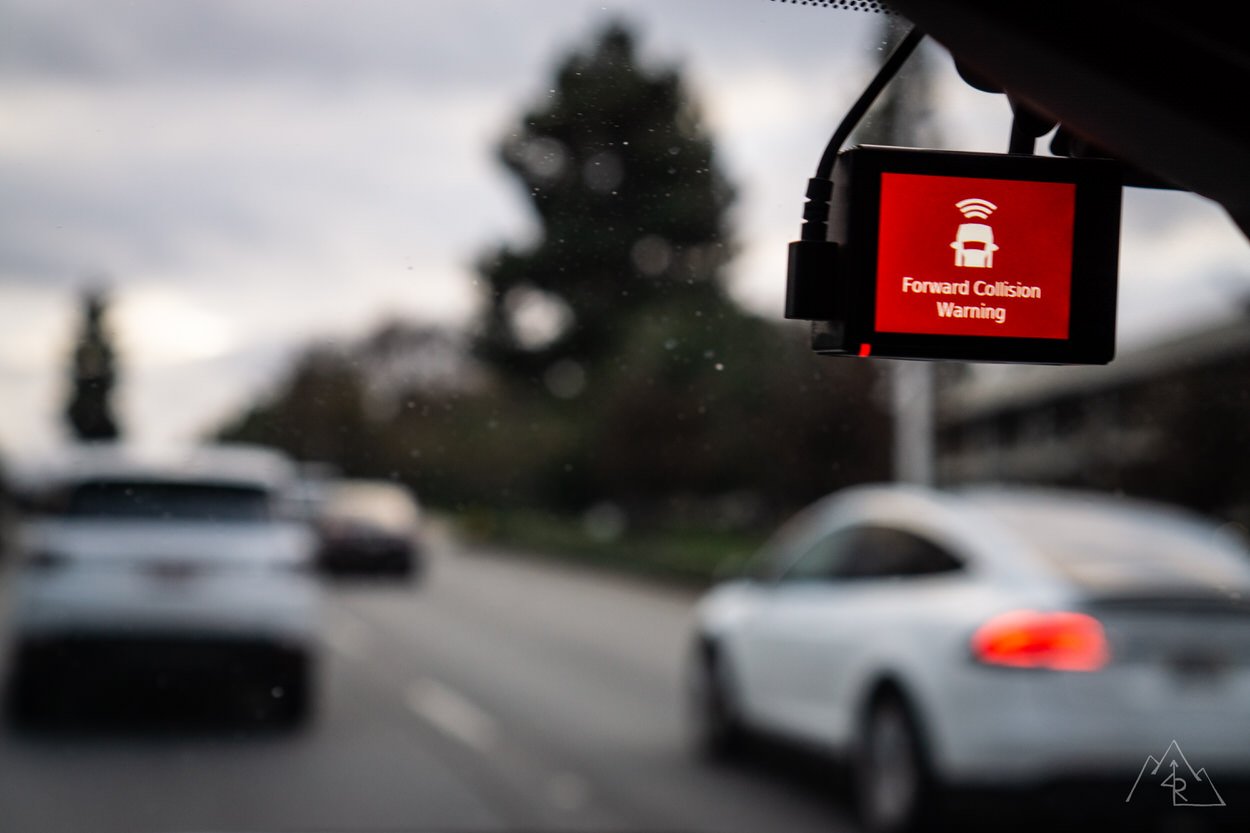 Another is the ability to see the lines on the road, informing you when you stray outside of them.

In my experience, the camera was able to detect solid lines consistently and ‘dashed’ lines less often.

The feature worked best on smaller roads where the outside line was solid continuously. When it detects you crossing the line, a notification pops up on the screen, along with an audible alarm. It doesn’t feel intrusive as an alert and remains quite helpful while driving. 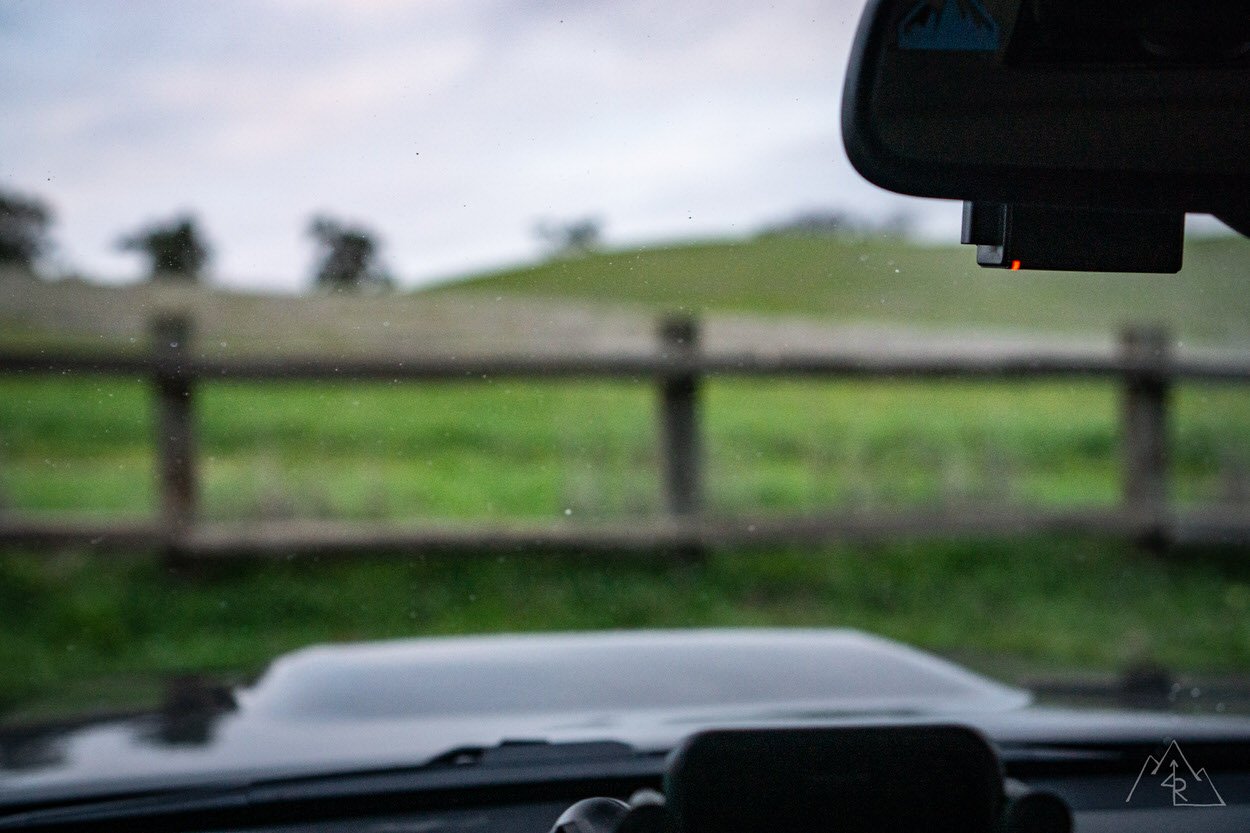 The 66w, when paired with the Parking Mode Cable, can monitor your vehicle when you have parked and left it. It uses an input from an accessory circuit (one that comes on when the key is turned on) to determine when the vehicle is on or off and will automatically engage Parking Mode.

It can be set to detect motion on camera or physical vehicle movement (G-sensor) or both to automatically start recording. When you come back to the car the dash cam will have an alert if a video was saved from when it was parked for you to review.

This can let you know if something happened to your 4Runner while you were out. While in parking mode, the screen remains black with a red indicator light showing it’s watching. 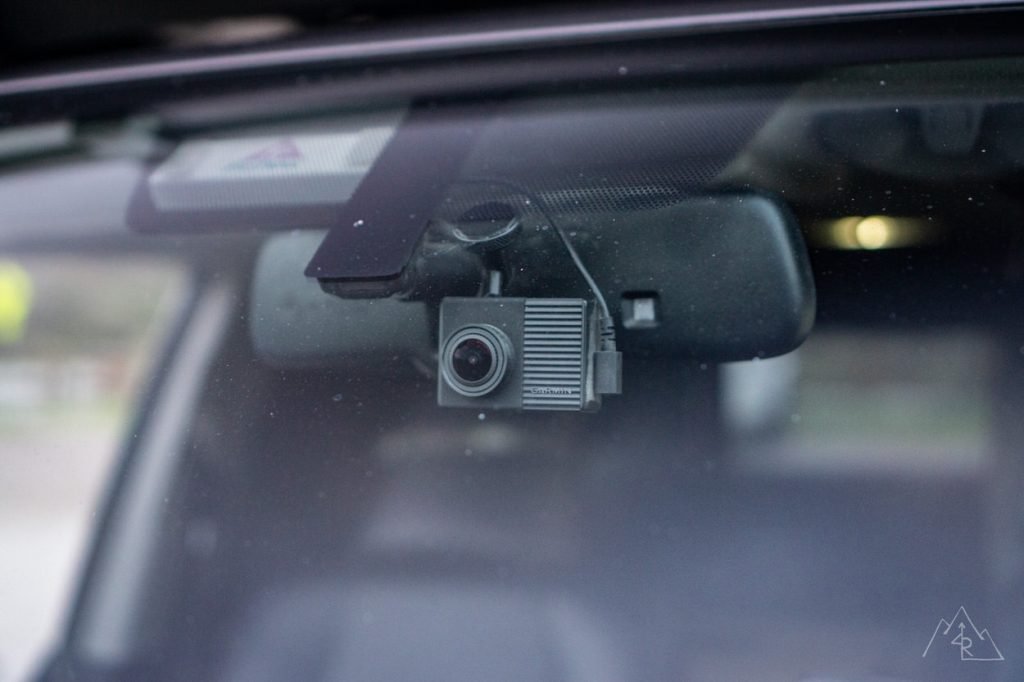 The Garmin is capable of automatically syncing with up to 4 additional units in the vehicle. It will sync saved footage together to provide a seamless loop viewable on the Garmin Drive app. This allows for front and rear cameras, monitoring the road all around the vehicle.

The 66w comes with a really cool feature that creates a time-lapse of your trip when enabled. It takes a series of still photos and automatically stitches them together to turn your long trip lasting hours into a short clip that takes a few minutes to watch. The best part is that this mode doesn’t interrupt normal recording and collision detection. You can still access and save the raw footage as it’s creating your Travelapse.

The Garmin Dash Cam comes pre-programmed with traffic camera locations, and can alert you to upcoming camera locations. This is a nice feature when you are in an unfamiliar place and have no knowledge of where they might be. The screen will show that a traffic camera is coming up, along with a distance count down so you can know exactly when to expect it. 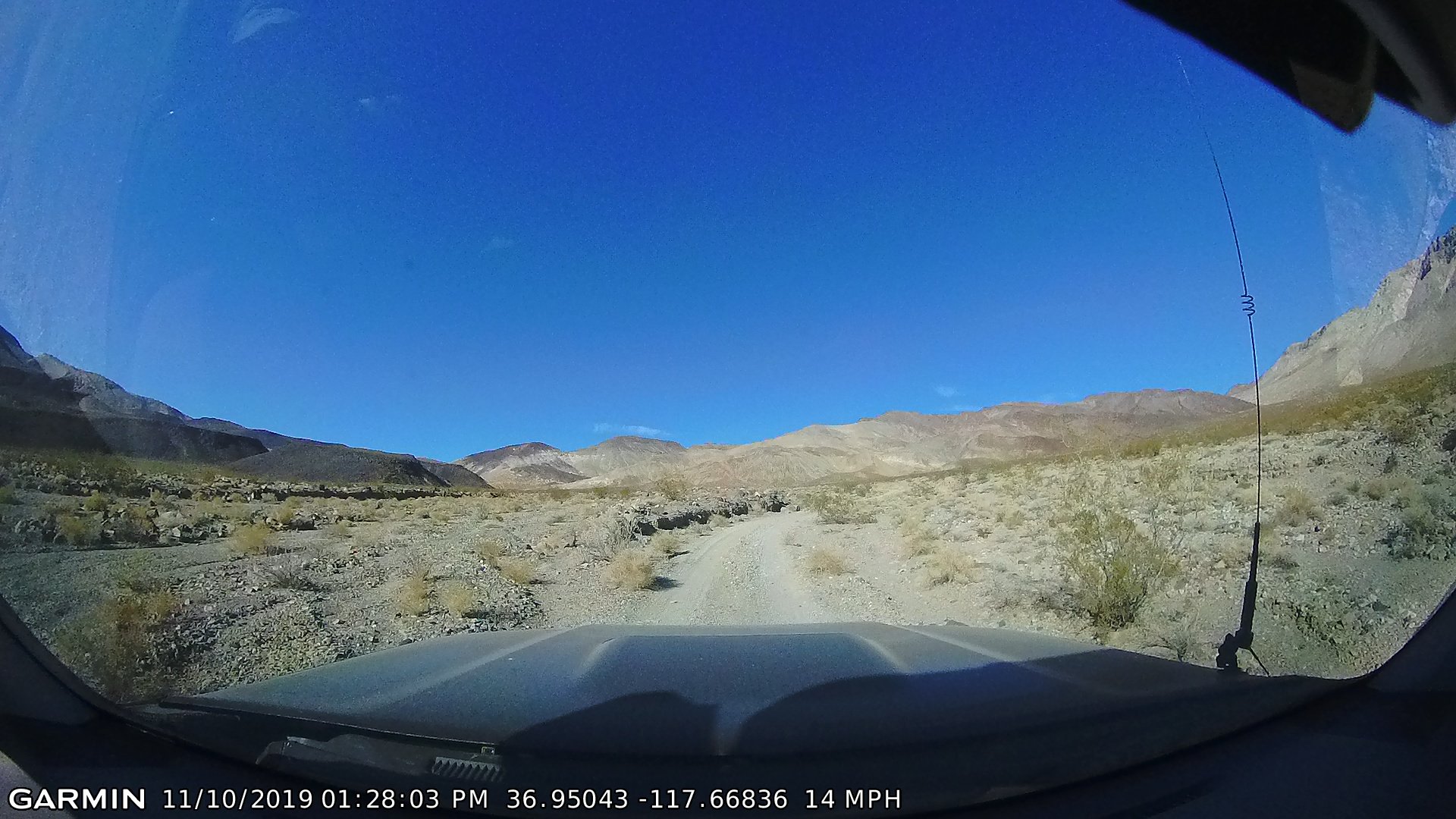 I have been using the Garmin Dash Cam 66w since November in the 4Runner. In that time, I have had it recording whenever I am driving.

I have documented a few close call scenarios with vehicles or wildlife, taken a number of Travelapse sequences, and even some photos of trails as I am driving!

The camera has been great for long road trips with its helpful vehicle and lane detection features, keeping my focus on the road. When reviewing video footage, the quality is high and seamless unlike potato dash cams of the past.

As an added bonus, the camera uses its GPS function to stamp the location and speed on the video playback to show where and when the video was taken along with how fast you were traveling. A good point of reference if there is an accident and you need additional data for law enforcement or your insurance agency.

The camera records well under a variety of conditions. I tested it during the day, night, rain, dust, and everything between. Reviewing the footage showed that under all conditions, roads and vehicles remained visible.

This is a sticking point for many other cameras because they will typically sacrifice performance under one condition to gain performance in another. The 66w does a good job balancing performance to give the best possible video output.

The only glitch that I encountered with the feedback was through the Garmin Drive App. Connection with the mobile device can be difficult at times when it becomes unpaired unexpectedly with the camera while accessing footage.

While it does happen, in my experience a reconnect usually solves the problem with little hassle. This might be repairable in future updates of the app.

Another minor issue with those who travel off-road with the camera involved it’s built-in G-sensor.

When the camera is passively recording and you hit a large bump or dip in the trail, usually at speed, the camera thinks you have had an ‘incident’ and saves the video clip.

It doesn’t interrupt anything else the camera is doing, so the only action needed is to remove the accidentally saved footage at the end of a trip to open up storage space on the card. 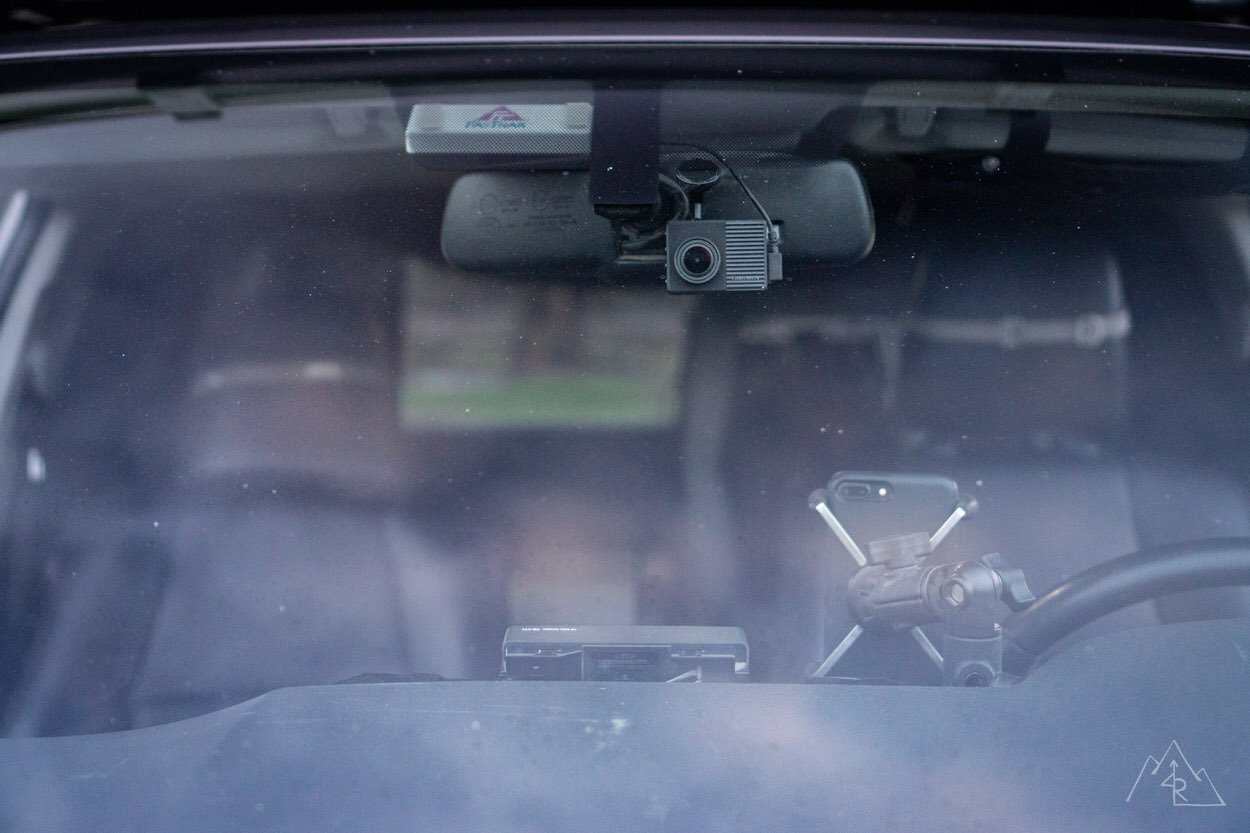 The Garmin Dash Cam 66w is a seriously impressive windshield companion. The features are very well thought out and perform to a high standard. Having it installed in the 4Runner has given me peace of mind when driving through the city center, and excitement that something is recording awesome trail footage while I’m out alone.

While I don’t feel the need to record every second of my adventures in detail, I do like having the option and the 66w is there to do just that!

Great review! How did you wire it up? Is there a way to permanently wire it?

Trevor // Sorry I missed your comment earlier! I have it wired using their Parking Mode Cable (purchased separately). The instructions give you a good detail on how to install for your vehicle setup!

Trevor, they sell a wire harness that will allow you to have permanent power.

Any issues with overheating?

None since I have been using it. That includes a November trip through Death Valley. If anything changes, I will update the original article!

Great write up Max. I absolutely love all my Garmin devices, and I didn’t realise they had a dash cam.

Thank you! It’s been great so far. I too have a number of Garmin devices and it follows suit with quality and function.