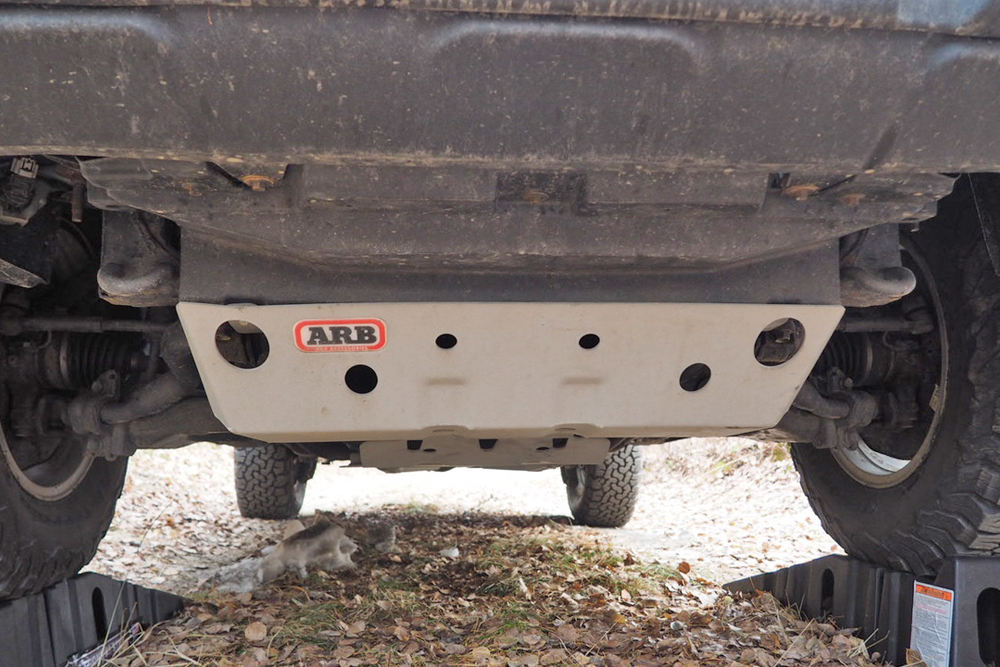 The ARB Skid Plate Kit Is More Than Meets the Ad: Quick Overview and Install Guide for the 5th Gen 4Runner

If you go by most advertisements for ARB’s 5th Gen 4Runner skid plate kit, then you might think a single skid plate is all you get.

I was underneath my 2013 4Runner a few weeks back finishing up my engine block heater install when I grabbed the oil pan skid plate to help pull myself forward.

Much to my chagrin, I instead pulled loose a fistful of rusty metal flake.

Closer inspection revealed that both forward skid plates had lost quite a bit of structural integrity, especially around the oil drain plug access hold and several of the mounting tabs.

This particular 4Runner, which I recently purchased with just over 50K miles, spent the first five or so years of its life in the Northeast. While most of the undercarriage features a durable rust-preventive coating, the skid plates had suffered a bit too much salt and come to the end of their useful existence.

Not wishing to tempt tetanus at the next oil change, or to have chunks of dilapidated rusty metal falling out behind me on road or trail, I had to accept that it was time for a replacement.

I had previously researched some of the popular 4Runner skid plates, such as those manufactured by BudBuilt, but in this case, time was a critical factor, as I was to leave within a week on a protracted trip to Alaska.

This ruled out several quality manufacturers due to having to wait multiple weeks for the merchandise to be built.

In the course of my search, the ARB skid plate kit kept popping up, but always with the same single outline image and no accompanying photos or a list of what was included.

This image makes it look like the kit is actually just a replacement for the forward-most skid plate.

What’s more, you will not find it listed under the 4Runner options on ARB’s website, as it is marketed as a kit for the FJ Cruiser, Prado 150, and Prado 120.

Due to the Prado 120/150, 4Runner and FJ Cruiser sharing the same chassis platform, the same skid plate design has been used for the four vehicles. However, a second kit has been built to suit the Prado 150 with Kinetic suspension system as a slightly different lower ‘bulge’ is required in the front panel due to the positioning of the kinetic sway bar.

Fortunately, at the bottom of one of the listings on eBay, one customer’s review included a wonderful picture of the installed kit on a 5th Gen 4Runner, showing that it provides protection from the radiator core support all the way back to the transfer case cross member.

Given the relatively modest price of $461.70, including shipping, and estimated delivery within four business days, I decided to pull the trigger. 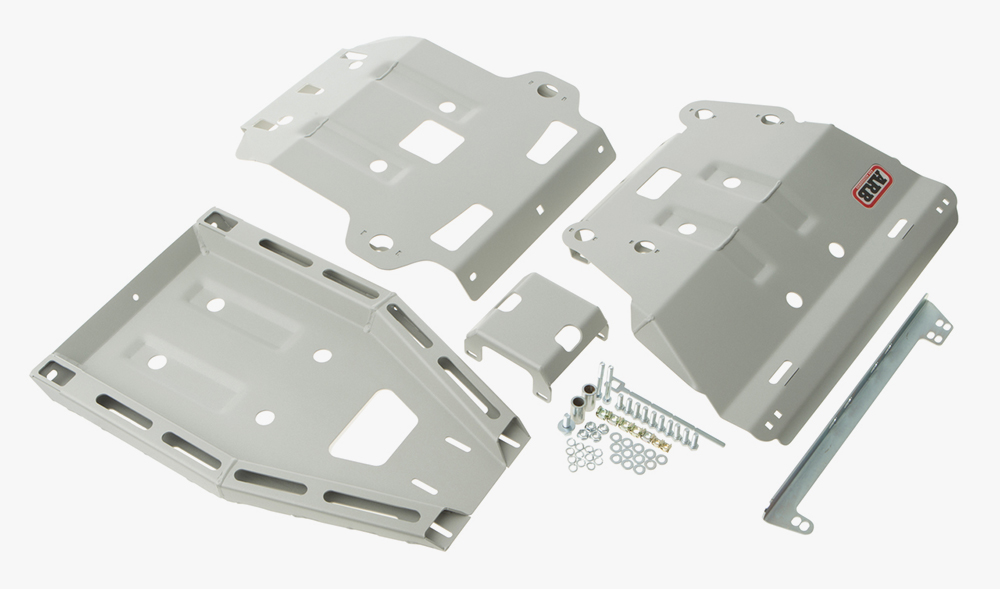 The kit includes three skid plates that provide protection from the radiator core support back to the transfer case cross member.

A few days later, a rather over-worked box was dropped off at the roadside in front of my house. Fortunately, everything on the manifest was still in the box.

The contents consisted of three large skid plates, each finished in an attractive silver-gray powder coat, plus brackets and mounting bolts.

In addition, there is a replacement for the skid plate which bolts to the low hanging portion of the skid plate. Please note that the kit does not include bolts to mount the forward skid plate to the frame or splash guard, only those needed to join the plates together, so you will either have to reuse your stock mounting bolts or source replacements.

Given the sad, rusty condition of my stock hardware, I opted to buy stainless replacements at Ace Hardware, which cost approximately $27. The oil pan skid plate does allow easy access to the oil plug.

Compared to other skid plates like a full set of RCI skid plates sitting at almost $1000.00, this might be one of the most complete and affordable skid plate options out there.

Find It On Amazon:

The steel used in the ARB skid plates is of considerably heavier construction than the stock ones, as the shipping weight of 57 pounds would indicate.

Another key difference is that the three plates are bolted together during installation in addition to being bolted to the frame. This makes it critical to follow the directions and work from front to back, leaving the mounting bolts loose until everything is in place before going back and torquing to specifications.

That being said, it would not be overly difficult to remove any of the plates if necessary for maintenance.

Given that the kit is made to fit multiple vehicle models, it is important to read the provided documentation to see what applies to your vehicle and what does not.

In my case, the most difficult part of the installation was removing the stock skid plates, as two of the mounting bolts required cutting, drilling, and retapping of threads.

Once that process was completed—followed by a thorough cleaning, rust treatment, and painting of the mounting surfaces on the frame—the actual installation of the ARB kit was simple and straightforward, taking less than 20 minutes. 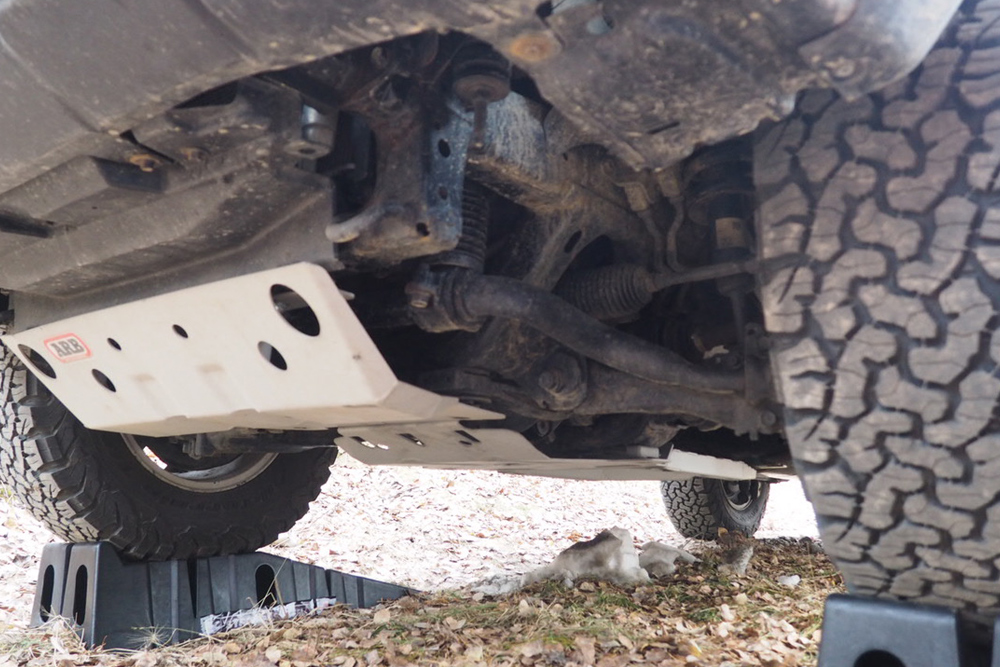 The front skid plate extends from the splash guard to the point where the stock oil plan skid bolted to the frame.

The ARB oil pan skid bolts to the rear of the front skid. 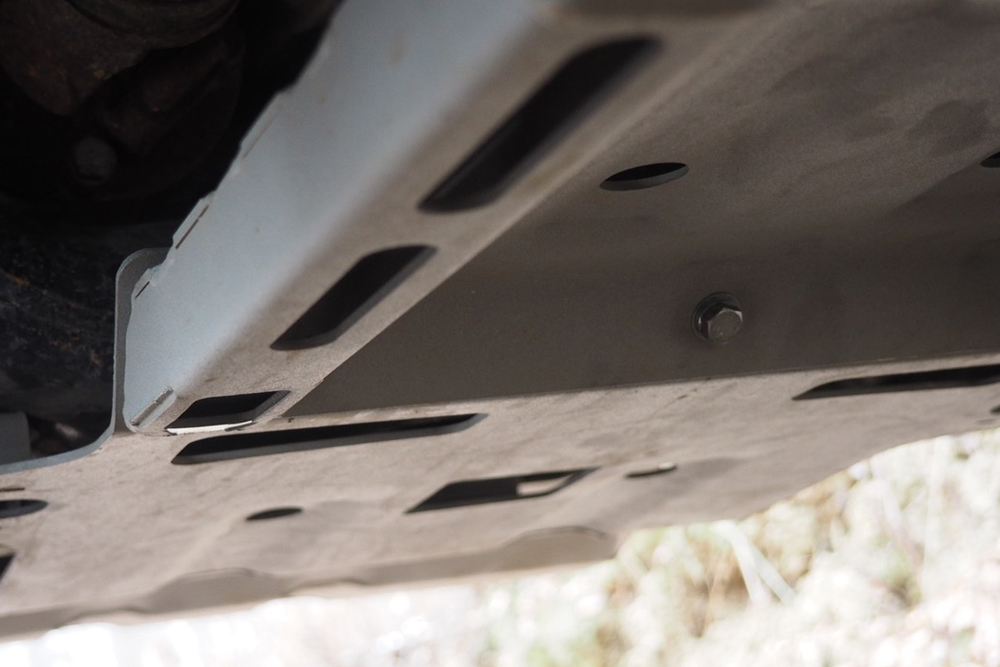 Note the access point for the oil pan drain plug.

The rear of Transmission Skid Plate 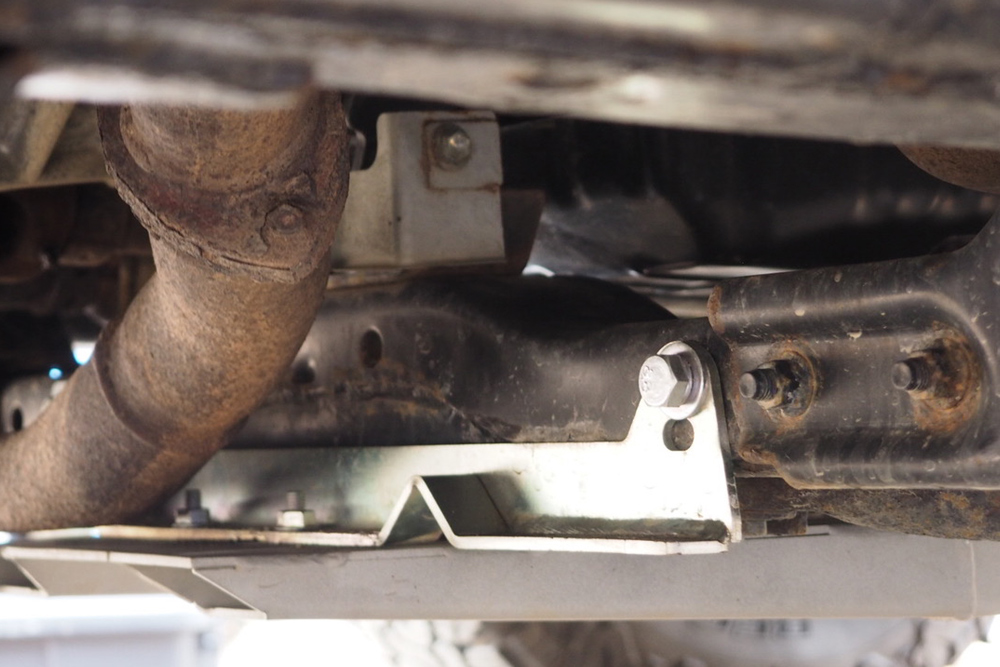 The bracket uses a single bolt on the passenger side. 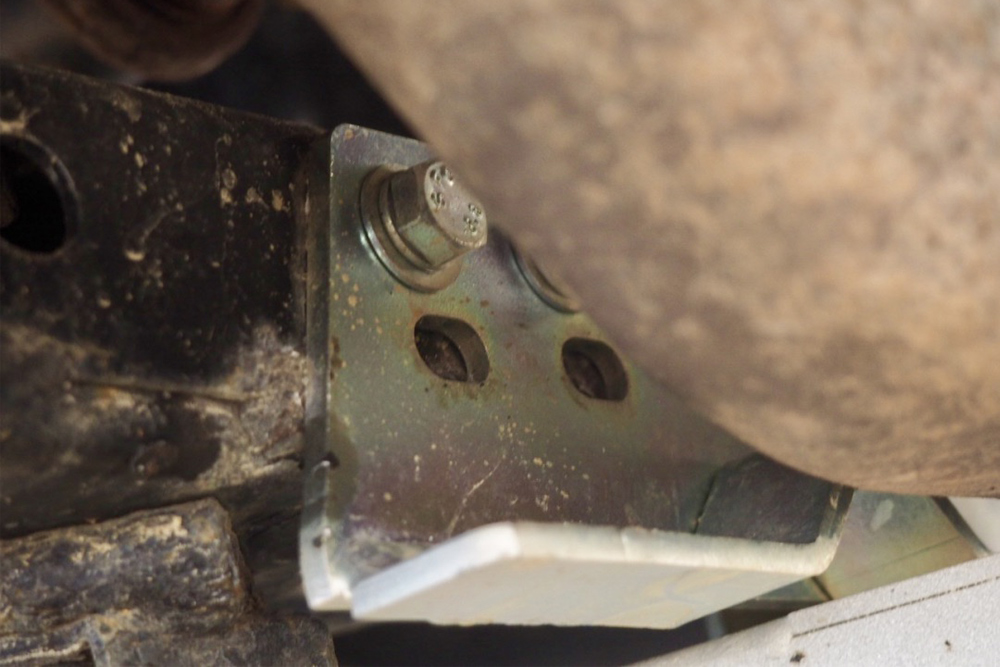 On the driver’s side, the bracket reuses the attachment point for the stock heat shield protecting the front driveshaft.

This heat shield can be reattached with the bracket, but mine had rusted away to uselessness. 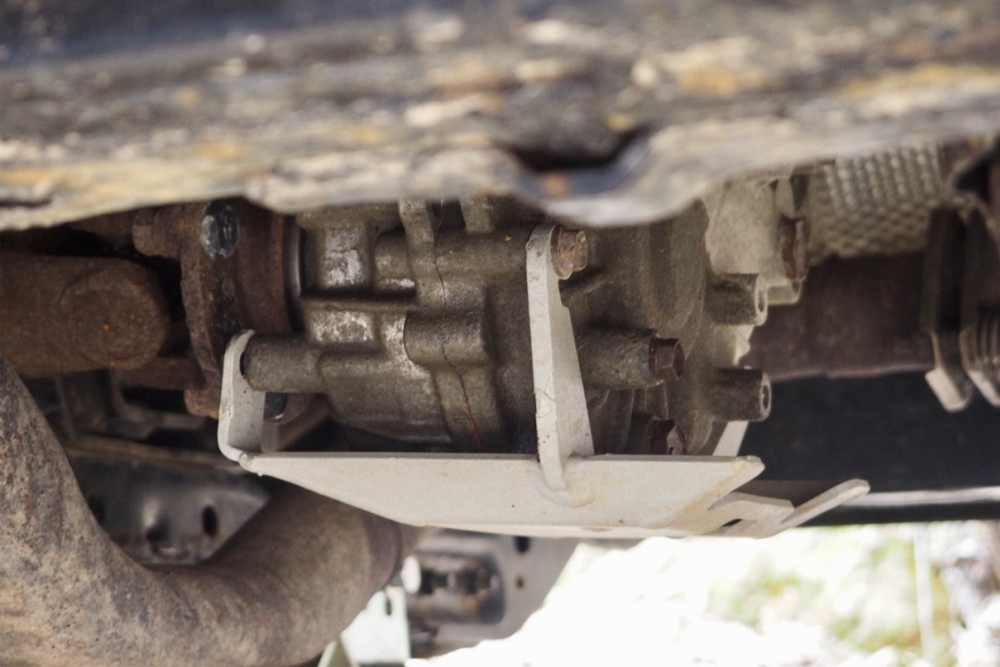 The kit also includes a replacement for the skid plate which bolts to the transfer case.

I found it helpful to raise the front of the vehicle on ramps.

It was also helpful to support the rear of each plate on my toolbox while I installed the front hardware, though you might find a floor jack works just as well.

I used an electric socket wrench to start each bolt. It was much easier for working one-handed than a standard socket wrench.

The tools required include:

This is a KDSS equipped vehicle.

At first glance, it appeared that the plate dropped a bit lower in front than the stock plate, but I believe that is due to an effect of the contrasting color fooling the eyes. The lowest part of the kit measured at 8.6 inches off the ground, again on a stock-height vehicle.

This may be different for the non-KDSS kit. 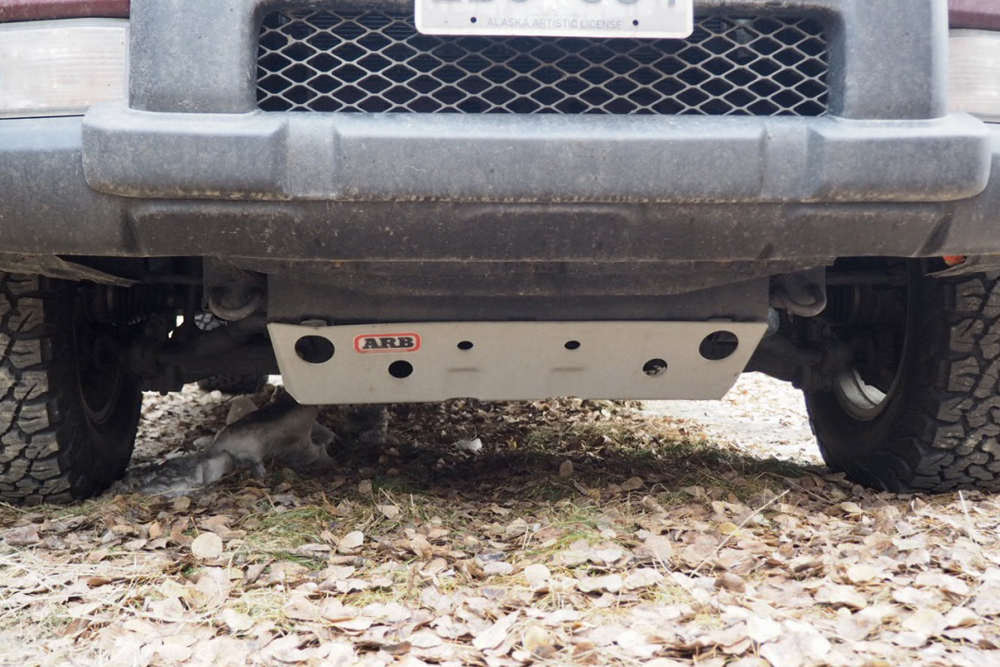 The ARB skid plate hangs about as low as the stock unit. Clearance at the lowest point measured at just over 8.6” on a stock height 4Runner.

After a few weeks and several thousand miles…

After a few weeks and several thousand miles, including severe weather driving in Alaska and the Yukon Territory, here are my initial impressions of the ARB skid plate kit.

On the plus side, it covers more real estate than the stock plate set. It’s also made of significantly thicker material, can be obtained within a week, is already powder coated, and is competitively priced.

Installation is simple and requires only basic hand tools.

As far as negatives, I may be reaching here a bit, but it does seem that the powder coating scratches easily, and might be harder to match than a matte or satin black finish.

That said, there is no law stating that skid plates need to be pretty! Further, in my experience it retains a LOT of snow around the front, but so does the stock skid plate.

Overall, I am happy with my purchase so far. If you are in the market for an upgrade over the stock skid plates on your 5th gen 4Runner, you might want to give ARB a closer look.

Dan - @LOTW
Hello, my name is Dan. I recently moved back to Alaska. My hobbies include exploring the North American backcountry by wheel and by foot and taking long road trips in my 2013 Trail Edition.
Recent Posts
Subscribe
8 Comments
Inline Feedbacks
View all comments

I do not change my oil. Does the arb have access to oil drain and filter for mechanic?

From a mechanics perspective, these are absolute bullshit. Not needed and make the vehicle a nightmare to service. Have fun not being able to get to your oil filter anymore without countless bolts and spacers and garbage. Silly, heavy, pointless, cool guy shit.

To access the oil filter, only the front skid plate needs to be removed. It really isn’t that difficult–just a couple of extra attachment points vs. the stock skid plate.

Nice article, I’m definitely going to go with these after your review. Can’t beat the price for the coverage. I noticed in you shots, a few of the pieces look to not be painted. Any concerns with those pieces rusting quick?

Hi Dillon. All of the skids are powder coated, and the hardware is either stainless or zinc coated. Thus far, nothing has rusted. Thanks.

Thanks for sharing this! This kit went under my radar as I’ve been looking at skid plates because there’s not a lot of information out there on it. I didn’t even realize it had more than just the front skid included since a lot of vendors seem to be using the wrong photos. I do have a couple of questions about it I’m hoping you might be able to address: -Can you still use the front skid as a jacking point? -Is the front skid any worse than the stock skid to remove for access to the oil filter? -How… Read more »

Hi Kevin. I think I can answer your questions. First, I do think you can use the front skid as a jacking point if the Jack is placed where the skid bolts to the crossmember. The skid is made of heavier material than stock and has more attachment points, so it should be stronger than the stock skid. That being said, I’m not an ARB engineer, so it may be worth contacting them if you have concerns. In my experience, the front skid isn’t too difficult to remove, it just has some additional attachment points, including to the oil pan… Read more »

Thanks for taking the time to respond, very helpful! Hope you’ll post an update after you’ve gotten a chance to beat them up for a couple years. 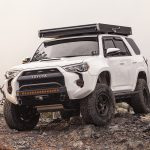 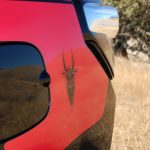