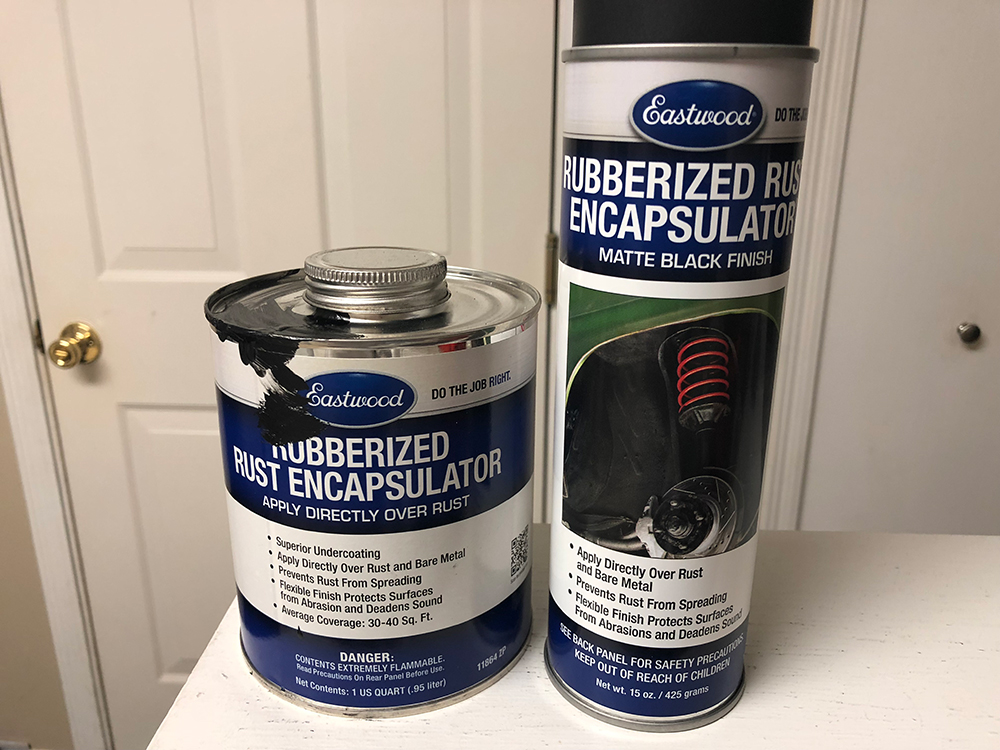 Prevent Rust with Rubberized Rust Encapsulator on your Car, Truck or 4Runner

Growing up in the Orlando area, I had only a vague concept of the damage that rust could do to a vehicle. Hanging out in my friend’s hotrod shop, I had heard about the lengths that people would go to get classic cars that were from the Southeastern and Southwestern US. Moving to Minnesota, my vehicle wasn’t ready.

My previous vehicle, a 2007 Toyota Tundra SR5, came with me from Florida a decade ago. The body had largely been spared any serious rust in its decade of Minnesota winters, but rust was appearing on the bottom of the doors and the frame.

I purchased my 2015 4Runner SR5 from a dealership in Minnesota back in April. I knew that I wanted to do everything that I could to protect it from the elements. I spent about $100 on all of the supplies, the dealership wanted to charge $600 for undercoating. This seemed like a good fit for a DIY project.

The frame looked good when I bought it, with the exception of a little bit of surface rust starting to appear at the welds. Through a little research, I found Eastwood and their Rust Rubberized Encapsulator. Their website and the label on the can claims that it can be applied directly over rust and to bare metal surfaces.

I do not mind a little prep work, but this sounded like the perfect product for a frame that was in pretty good condition, to begin with. I ordered three cans of the Matte Black spray paint and one quart of the coating for the skid plates and other large surface areas.

You can do this project without a number of the items listed above, they just make things easier. The jack and jack stands make it easier to get underneath your vehicle. I can roll under with a creeper, but the angle was tough for coating. If you do, use jack stands and the tire chock for additional safety.

The coating seemed to come off of my skin easily, but I was glad that I wore latex gloves. If your rust is not that severe, or your vehicle is new, you may not need the drill and stripper.

As with any paint projects, preparation is the key to the best results. I took my truck to the car wash to rinse off the road debris and dirt. You could also use a pressure washer at home. Once the vehicle is dry, you can assess the rust that you currently have.

If there are loose pieces, remove them with a scraper or the drill attachment. I also used it on the surface rust, and then cleaned with acetone to remove the dust left from the rust stripper. I wiped down the areas that I planned to paint with a microfiber. You can also use a compressor to dry surfaces or remove dust. 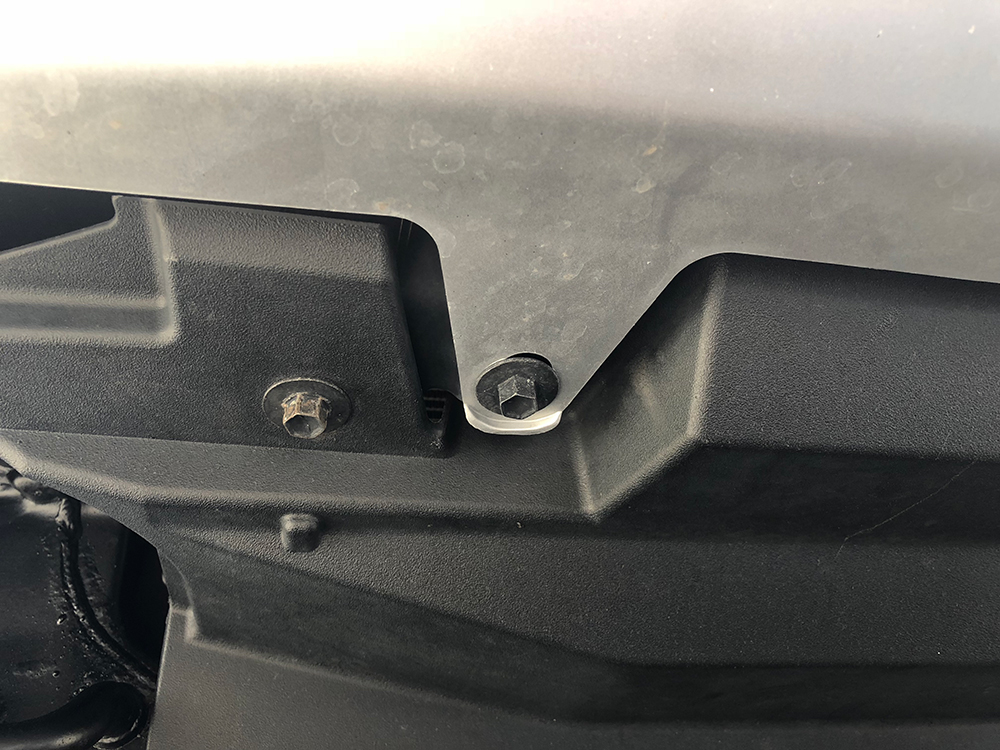 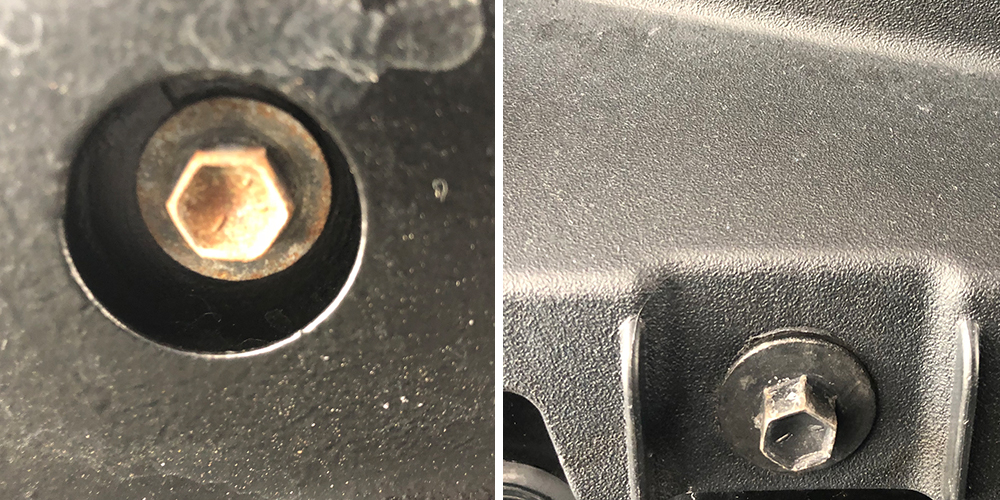 Next, I removed the factory skid plates. I have not upgraded any of them yet, but I decided to undercoat them while I decide which aftermarket one to go with. I started by removing the screws from the bottom of the front valance and the black plastic covered between the valance and the skid plates.

Like with any other spray paint or coating, you need to shake the cans. Eastwood says to do it for 2 minutes before the initial application. Shake them throughout the process too. It keeps the coating consistent. I applied the coating to these skid plates first.

I live in a townhouse, so space is at a premium. I laid out some cardboard on the table to keep from getting undercoating on my patio table. I could have sprayed these pieces too, but I had the quart to use. The paint did not level when applied with the foam brush, so I dabbed it on.

This allowed me to see where I had applied the coating, and it gave it a better-looking texture. I then used a spray can to get in some of the harder to reach areas. In order to make sure that the brush did not dry out, I wrapped it in plastic wrap and covered the container that I was using for paint.

While one side dried, I got underneath my 4Runner to take care of the frame. I started in the front and worked around my vehicle counterclockwise. 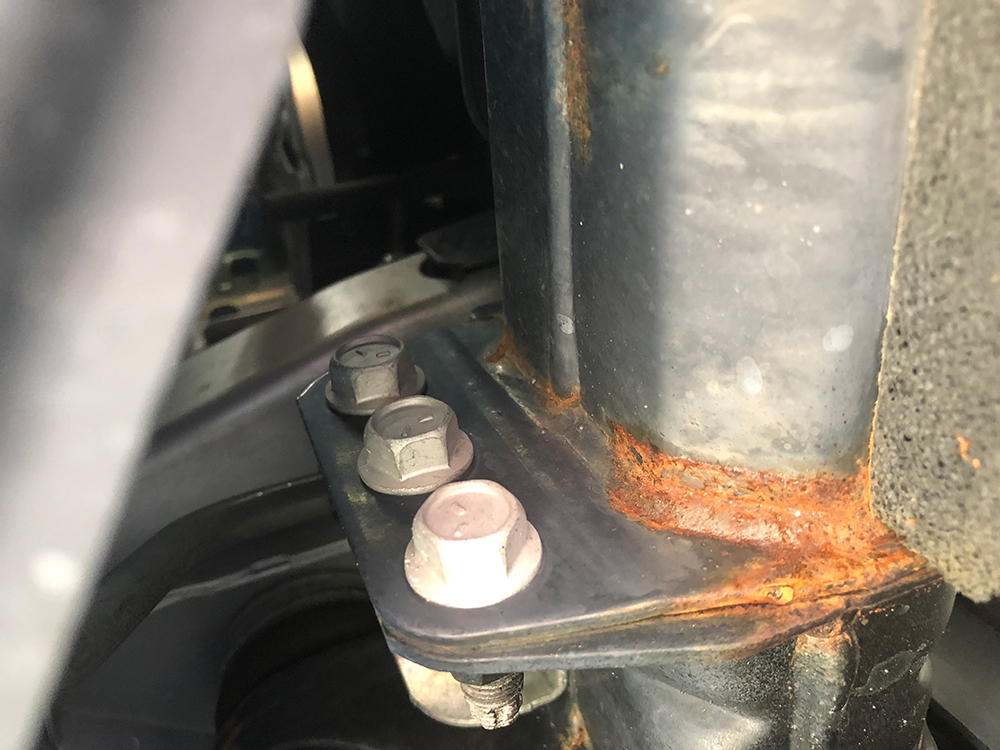 Be sure to avoid spraying the power train and any exhaust components. Eastwood recommends holding the cans 10-12 inches away from the surface, which will make the chances of overspray higher. This product is not intended for the temperatures of the power train or the exhaust, and it will smoke and burn off. If you happen to get some overspray on the exhaust system, wipe it off with acetone and a rag. Also be careful of overspray when you are closer to the painted panels on the sides of your vehicle. Either use painters tape, plastic, and newspaper to avoid overspray, or just use caution.

The trailer receiver seemed to have more surface rust than anything else, so I coated it as well. The rubberized coating says it will help with sound dampening, so I coated the wheel wells too. I have not had any issues with road noise, but it couldn’t hurt.

After completing the frame and the axels, I went back to do the other sides of the skid plates. The coating is supposed to be dry to the touch after 30-60 minutes. Despite 80 degree temperatures, it was still a little tacky after an hour. Do not rush it, let it dry.

Once it was no longer tacky, I repeated the steps above. I dabbed on the undercoating, spraying the areas that I could not reach with the brush. As I had more time to wait, I used this opportunity to get a closer look at the components that had been hidden by the skid plates.

Everything looked good, except for one rusted screw under the center of the front valance and a broken clip. I’ll have to head to the dealership to grab those parts this week. Once the underside of the plates was dry, I reinstalled them on the 4Runner. 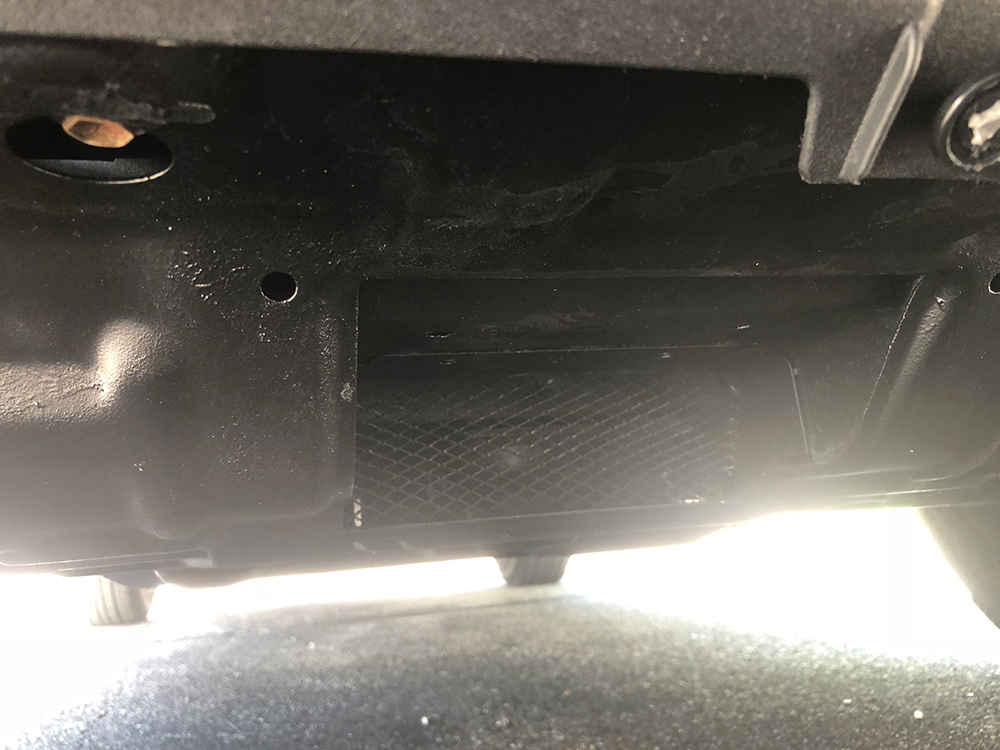 I am really quite happy with the way it turned out. Toyotas are known for their longevity, I hope this will help to keep mine on the road a bit longer. 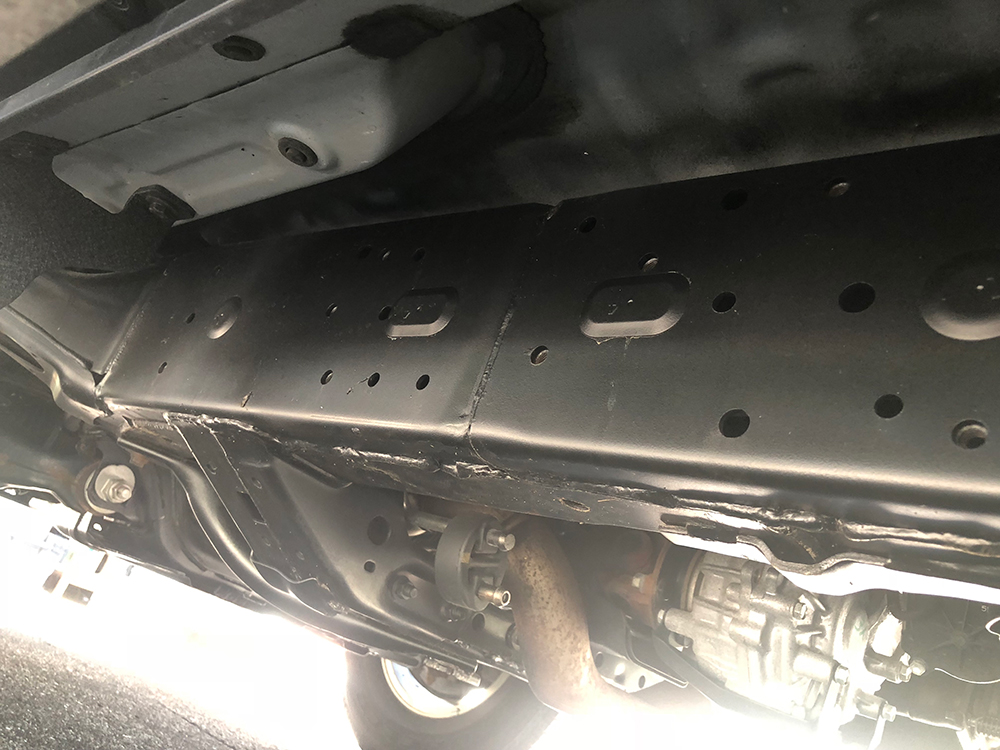 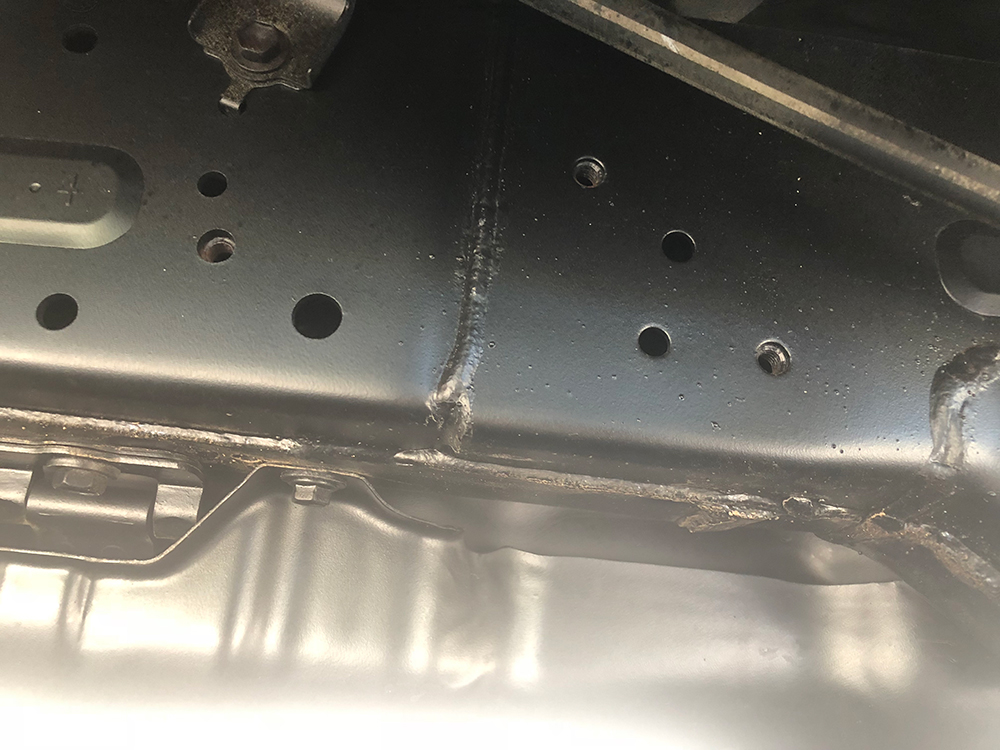 My name is a Josh, I’m a long time Toyota truck owner but this is my first 4Runner. Whether it is family trips to the cabin in the summer, or getting around town in a Minnesota winter, this is exactly what we needed.

You encapsulate even the tiniest piece of rust your done. And nobody preps well enough to notice, a quality rust inhibitor like KBS coating company will bullet proof anything. Living in the salt belt there’s no more work needed than just stated but buddies of mine have literally destroyed their undercarriage by “prepping” the light surface rust then using the rubberized coating spray and brush on. Its like spraying cologne over a dog turd…

Hey! Love your site! Recently bought a 2014 4runner trail that has the same surface rust at the welds as you had and am thinking about doing this. How’s it holding up? Do you know anything about por15 for an undercoating? Also, did you end up doing the inside of the frame? If so would love to hear how that went! I appreciate your help! Thanks for all he awesome info and reviews!!

Hey, Ronnie. It is holding up really well. When I saw what the dealership wanted for the undercoating, I did my homework. I wanted a product that would hold up, prevent rust, and seal the existing rust. I have not done the inside of the frame yet, it will likely be next summer. I will do a full write-up when it is done. I am out of commission for a bit, had to have shoulder surgery and winter is coming. I am not familiar with por15. As with all coating projects, take the time to do the prep work.

Hi Josh, any update on how this product holds up? is the frame looking fresh still?

As of this past fall, it was in good shape. It’s covered in snow right now.

Nice! How do you apply the product to the interior of the frame?

Aerosol can with a hose on the end and a multi-directional tip. They have some videos on their site.

This looks great, but I think the problem with these rubberized undercoats is they’re actually trapping the rust in! Next time look into Fluid Film. It’s a lanolin oil/wax based undercoat that sticks to your chassis. Rather than creating a rubber barrier, it acts more as a waxy protective coating to keep salt & water away from your precious undercarriage. I’ll be doing a write up on it later this year…

Alex, while that is true of many products on the market, Eastwood did not simply make a rubberized coating product. This product penetrates into the surface and does not create air and moisture pockets, preventing the rust from continuing to develop under the finish. They also make a product for coating the interior of the frame, which I will likely be applying next. With that being said, I look forward to seeing your write up.