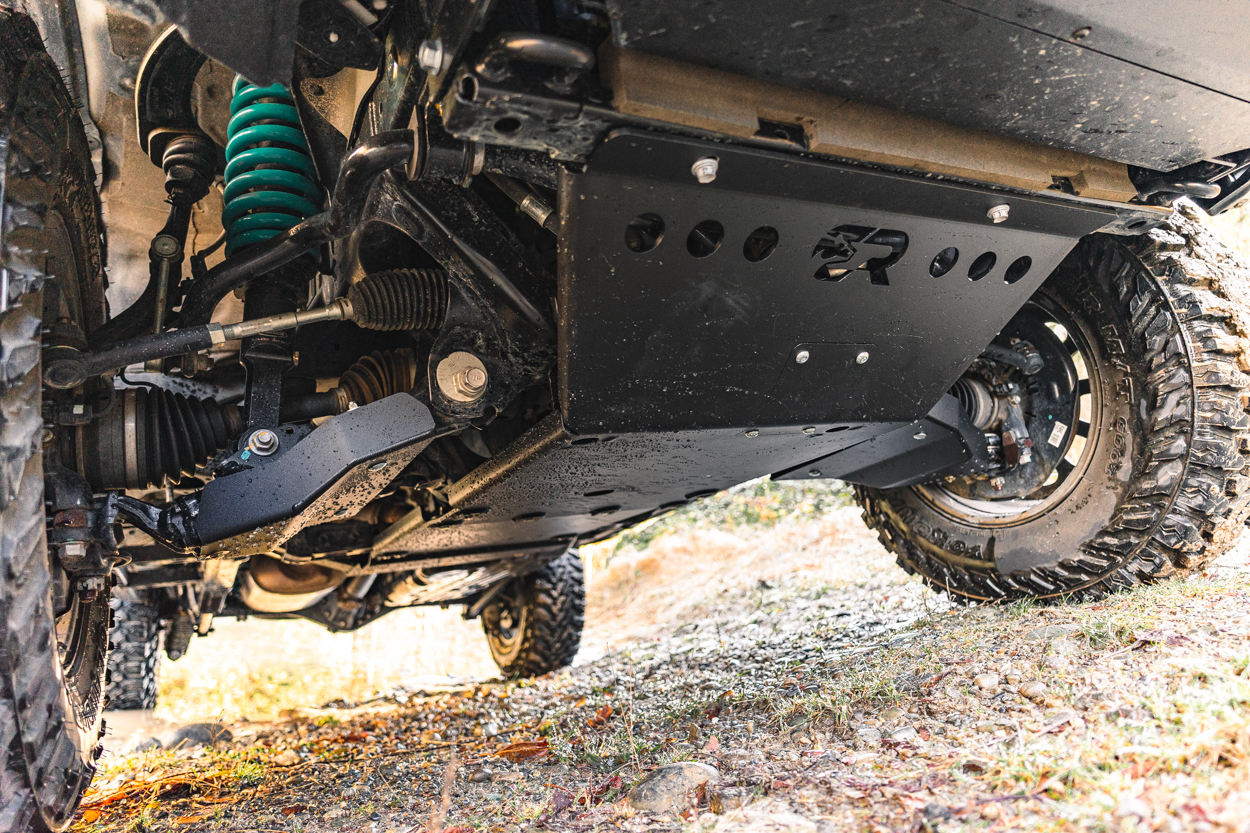 The 4Runner is born to venture off of the pavement. At the same time, however, we want to make sure we keep our investment protected so that we can enjoy the trails for years to come.

While it may come from the factory with mild protection underneath, aftermarket replacements vastly improve that level of protection. This is where the Cali Raised LED skid plate package has you covered (pun intended).

These Cali Raised LED skids are offered in either aluminum or steel and raw or powder coated. If you’re unsure about which material best suits you, be sure to check out Trail Tacoma’s article on steel vs. aluminum skid plates. 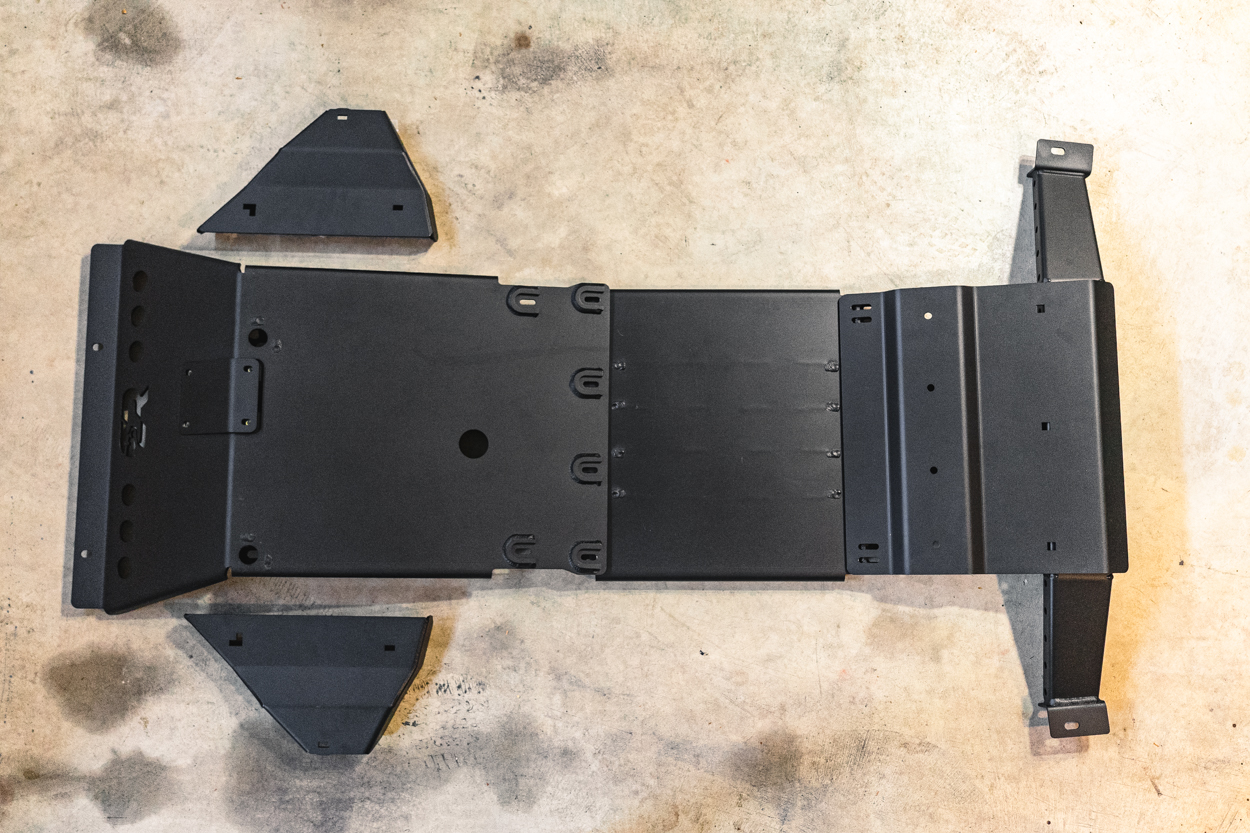 I opted to get all of the skid plates in aluminum. Aluminum suits my needs as moderate protection against trail debris and bottoming out on ruts when I’m likely driving over them too fast. I don’t do any hardcore rock crawling, so even with full aluminum skids, I should be well protected.

My favorite part about aluminum skids is that when I scrape them, I don’t immediately need to touch them up with paint. Unlike steel, aluminum is highly rust-resistant. That also means you can wear those battle scars with pride!

What I like most about these skids is that they’re all made in-house. That means the same craftsmanship, powder coat finish, and customer service for everything. I’m pretty big on continuity, so having everything match is important to me. All Cali Raised LED skid plates also come with a 2-year warranty from defects in workmanship and materials.

This post will only cover the front, transmission/mid, and transfer case skids. I’ve linked the complete skid plate package and where to find everything below.

Like many Cali Raised LED offerings, you can either buy the entire set (which saves a bit of money), or you can purchase only the components that you need. 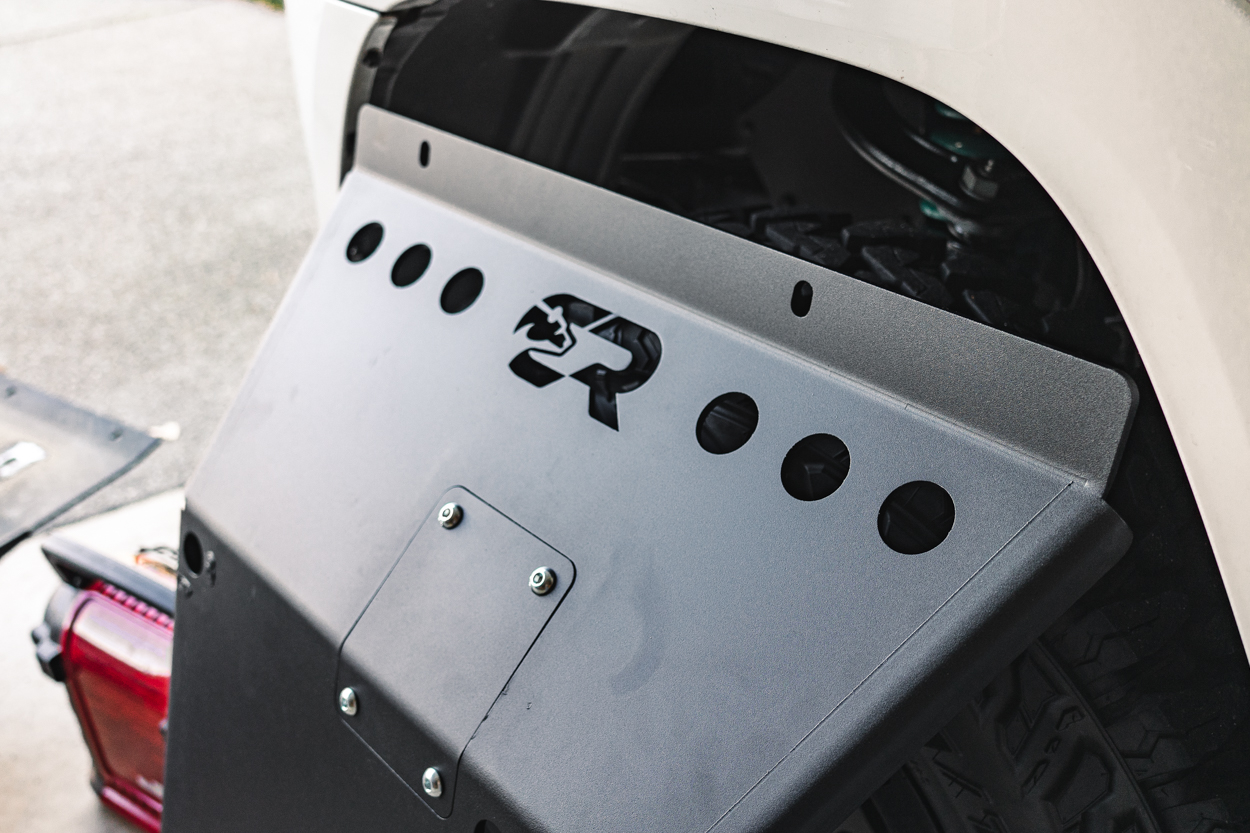 Think of the front skid plate as your first line of defense. This is why it’s often the first and often only piece of underside armor that 4Runner owners will upgrade. Ideally, you want to approach obstacles slowly. If your front skid plate makes really solid contact, that’s a good indication that you either need to take a different line or take a bypass route.

Cali Raised LED’s front skid plate offers solid coverage, easy oil filter and drain access, and water drainage ports. They are bolt-on and differential drop compatible if you have one.

From a coverage standpoint, I’d say this is in the middle of the pack. There are some brands that offer wider coverage, and others that are narrower. The former costs significantly more, partially because of the larger shipping size. The Cali Raised LED engine skid plate flairs out up front for added coverage. 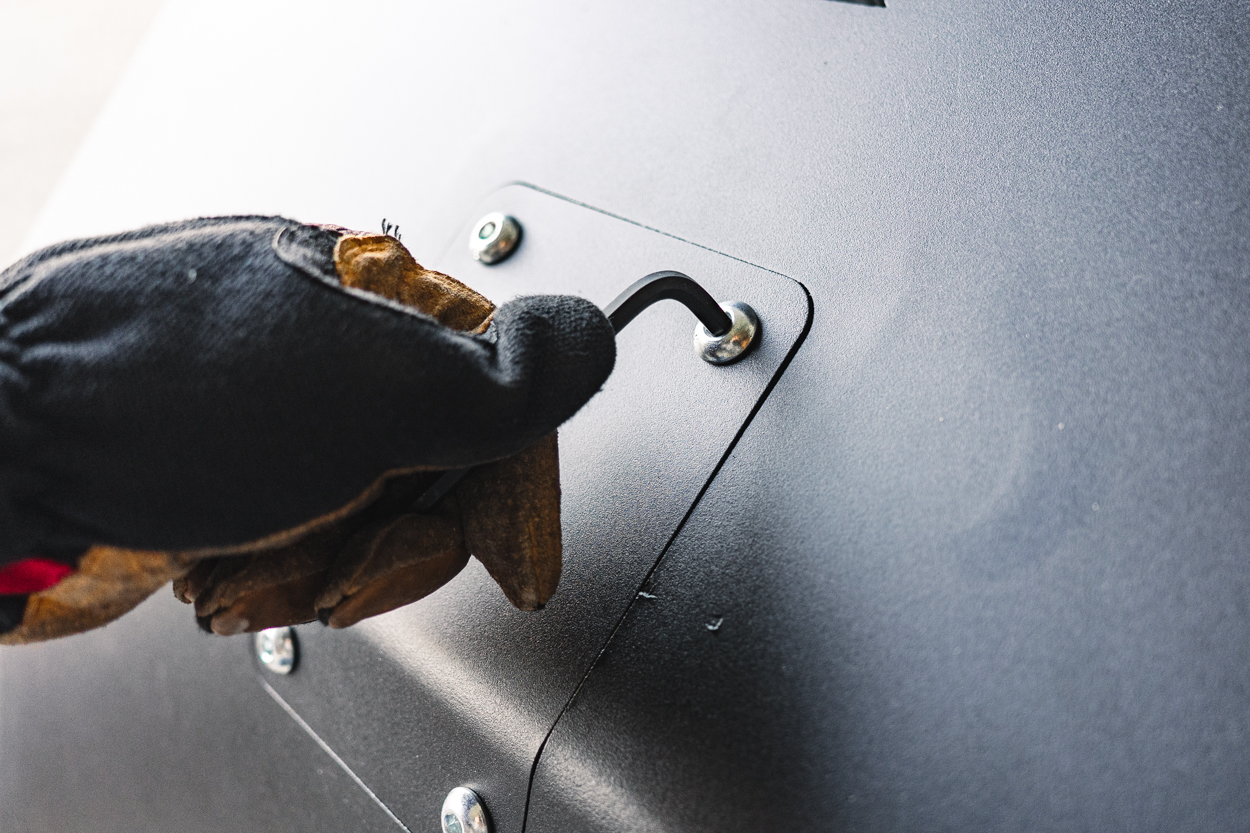 Install the supplied bolts with a 7/32 Allen key. 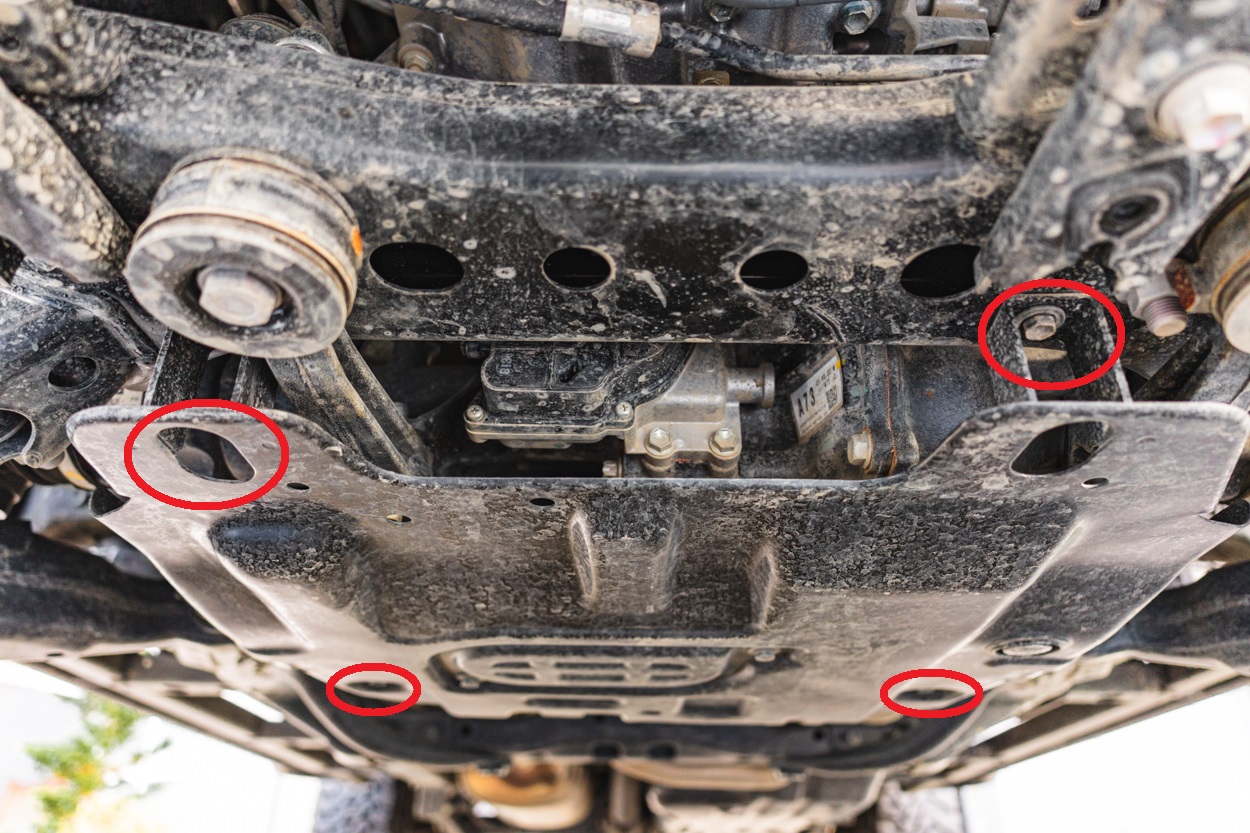 For the factory or TRD Pro skid plates, there are four bolts in total, two in front and two in the back. There is also a second plate that also has four bolts to remove. 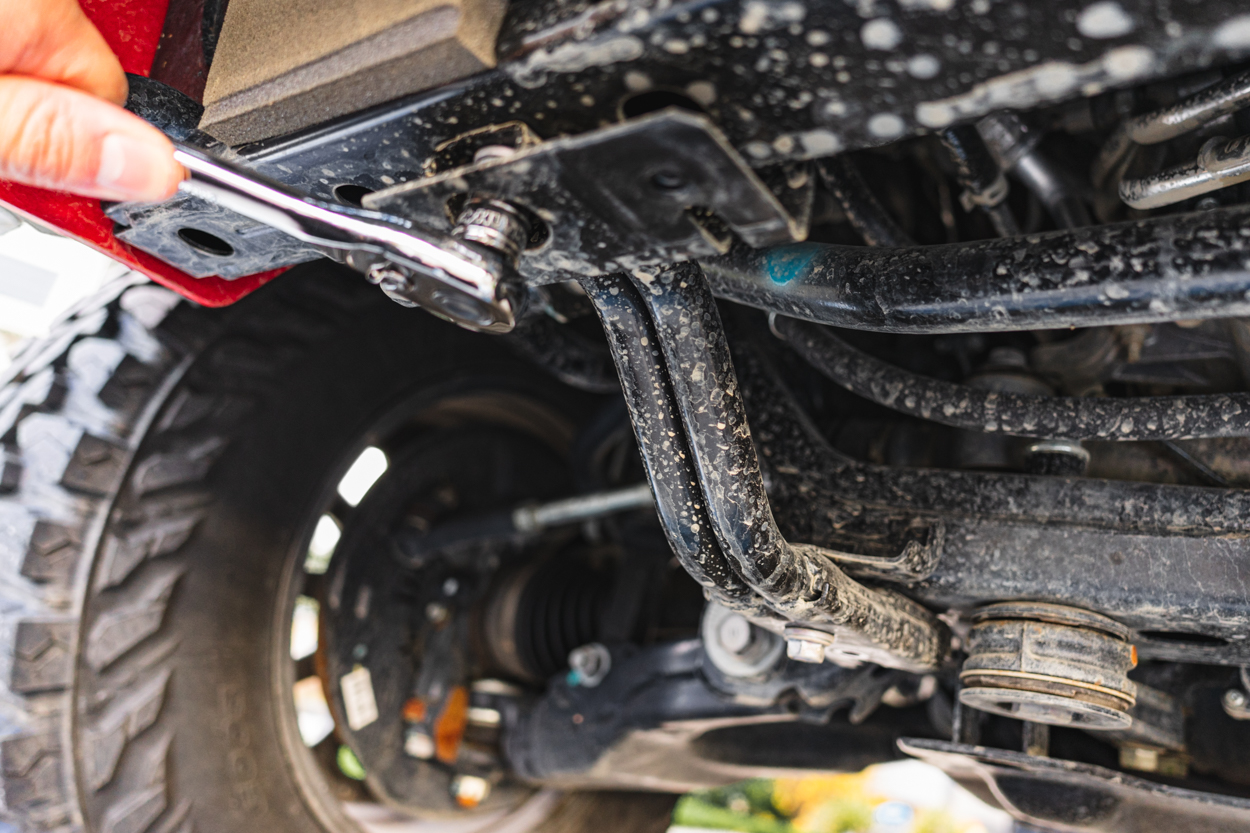 There are two front supports that will need to be removed. 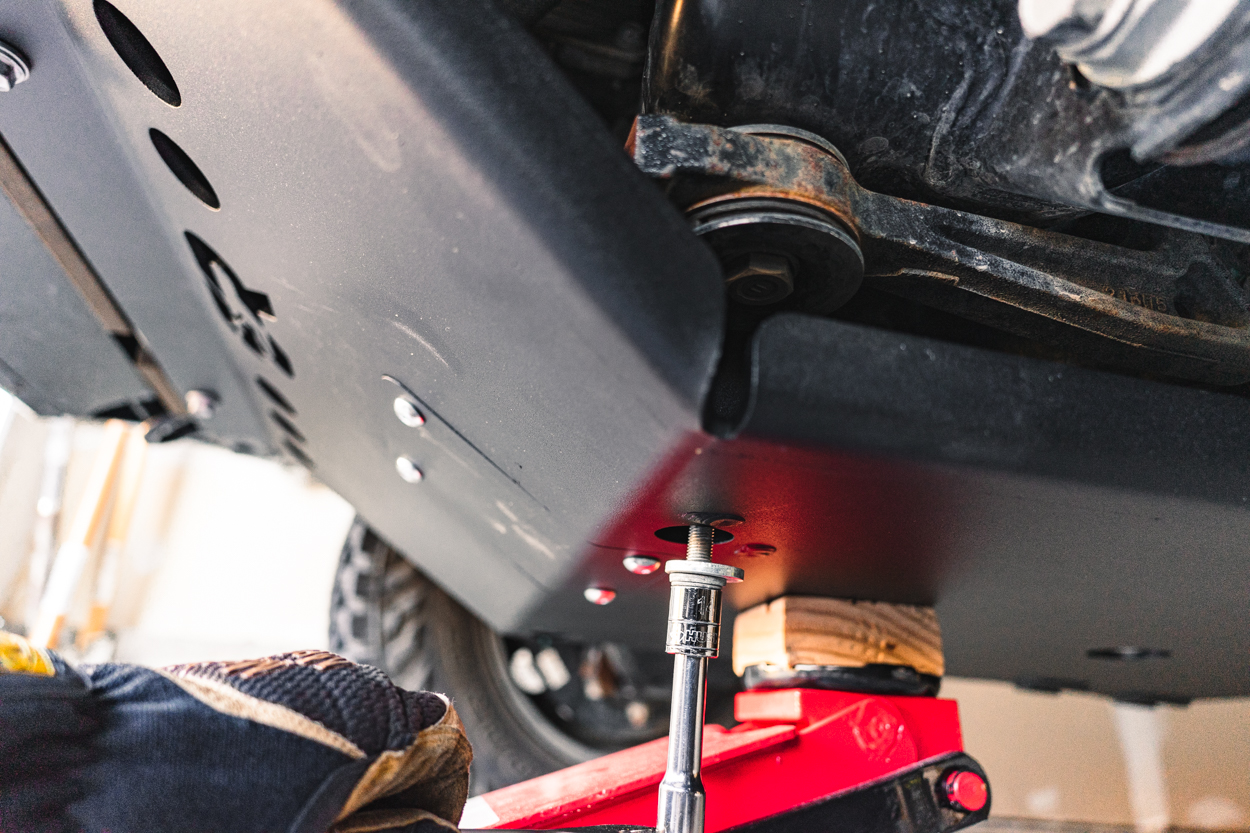 Reuse four of the 14mm bolts from the factory skid plate to loosely install in the front and middle of the Cali Raised LED skid plate. 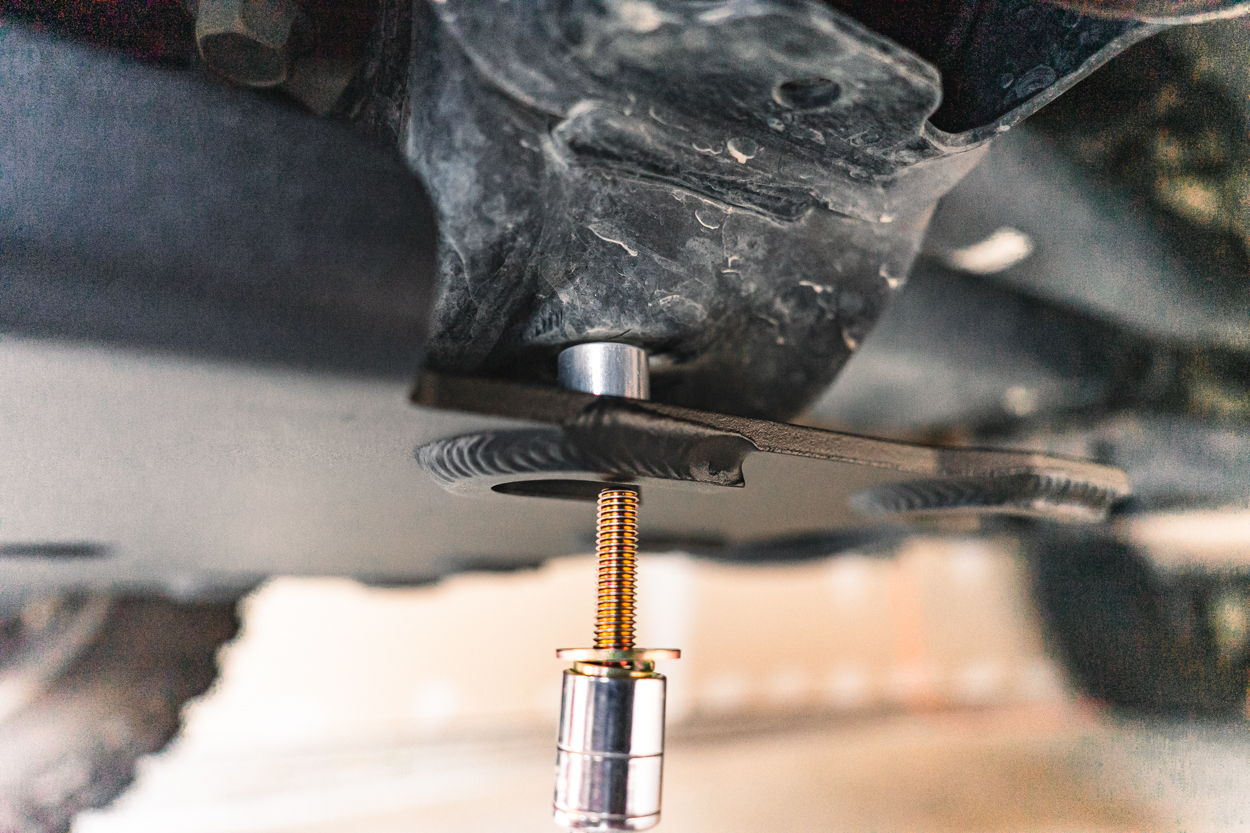 Cali Raised LED supplies hardware for the two rear mounting bolts (13mm), a spacer will be placed between the frame cross brace and skid plate here. 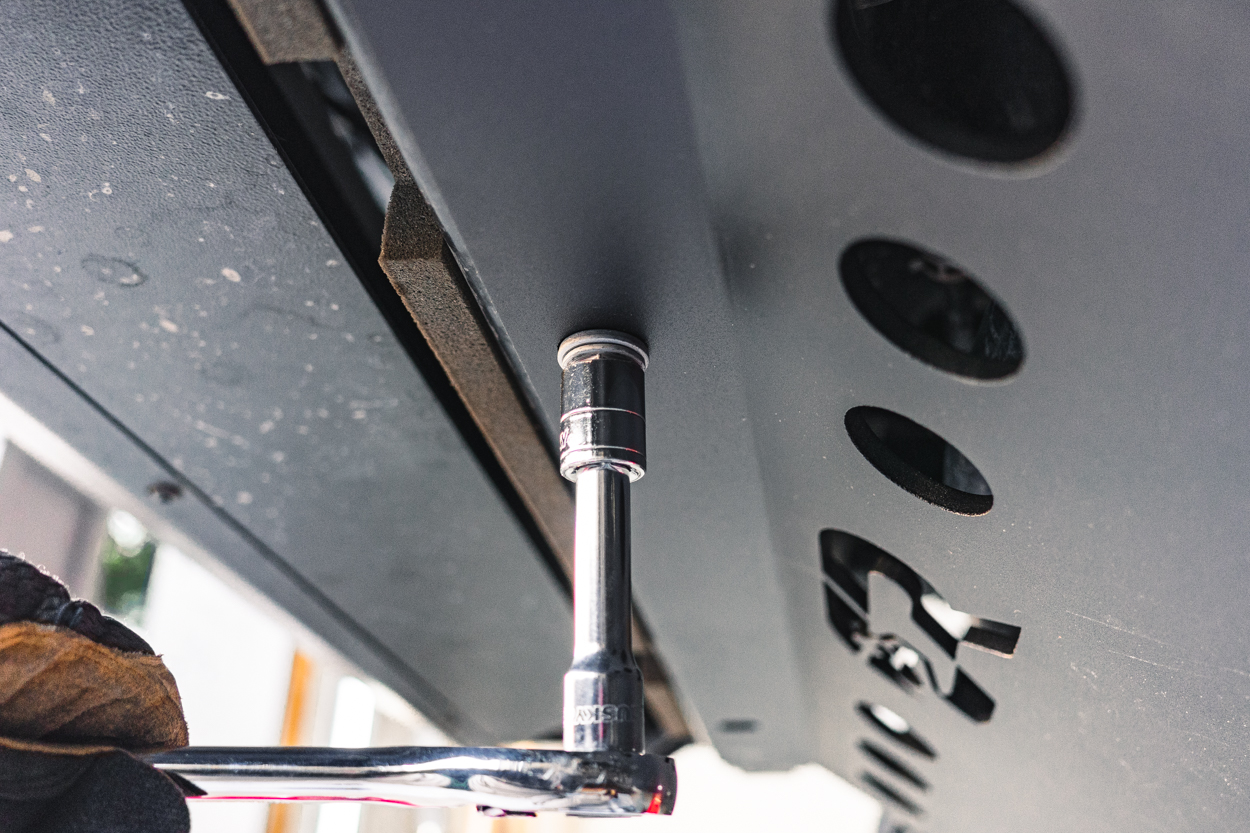 If you’re only installing the front engine skid plate, position it how you’d like and tighten down all six bolts. If you are also installing the transmission and/or transfer case skid plates, don’t tighten them down just yet. 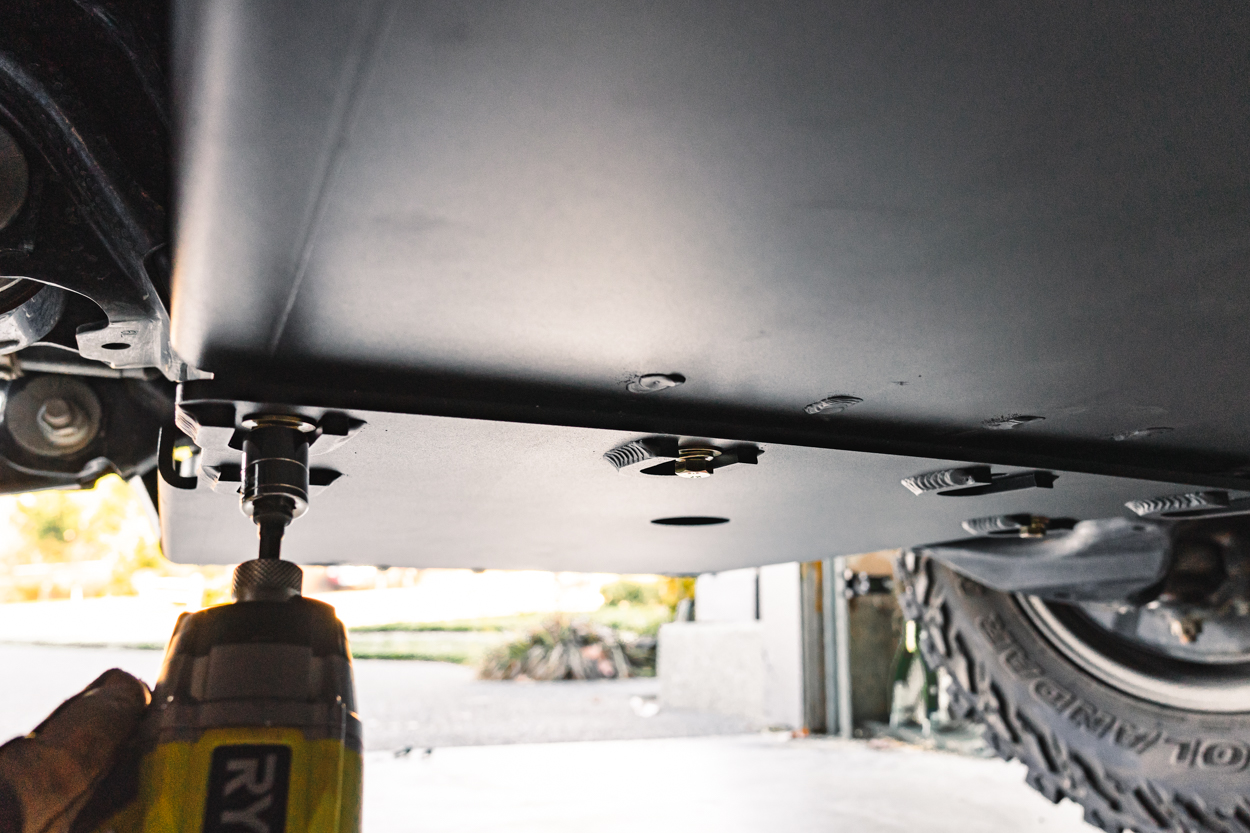 Damage to your transmission can mean potentially losing all power from your engine to wheels – and a costly repair bill. This is a simple, flat plate, but provides vital protection. 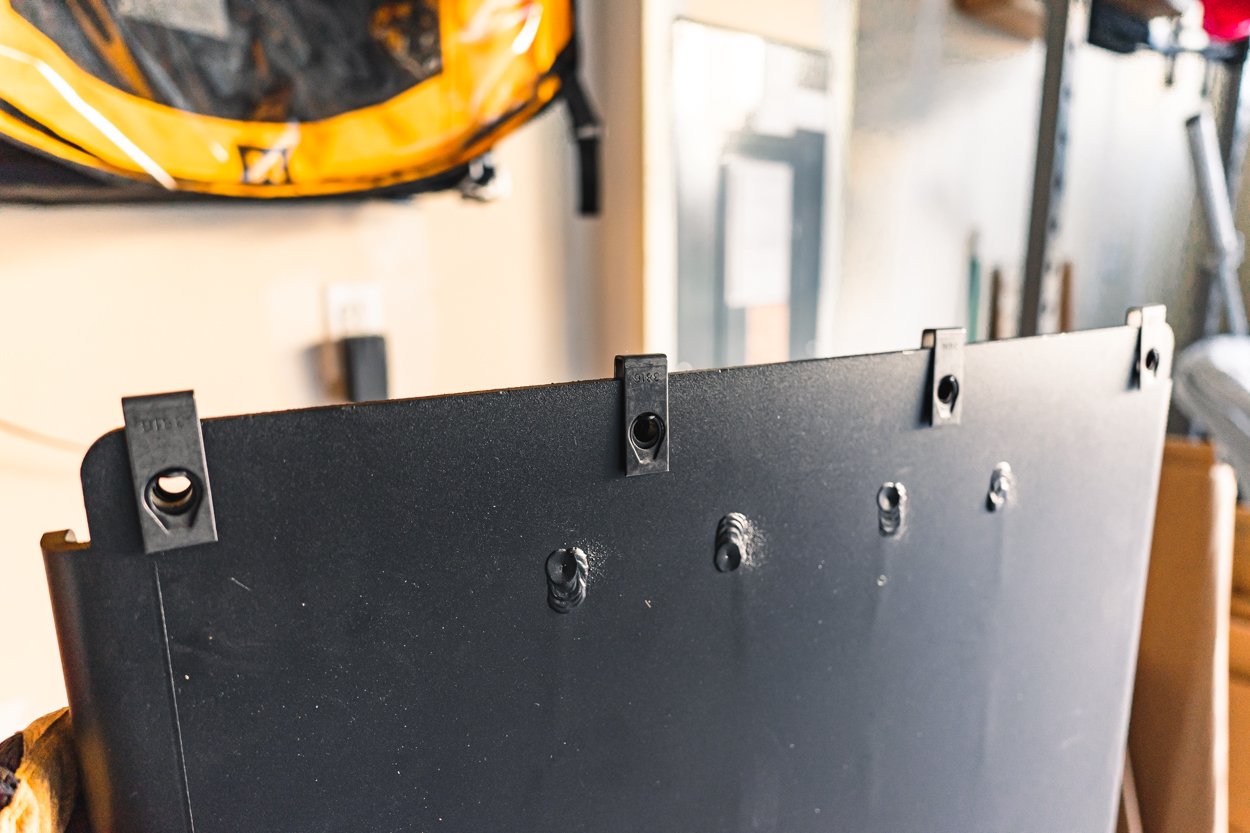 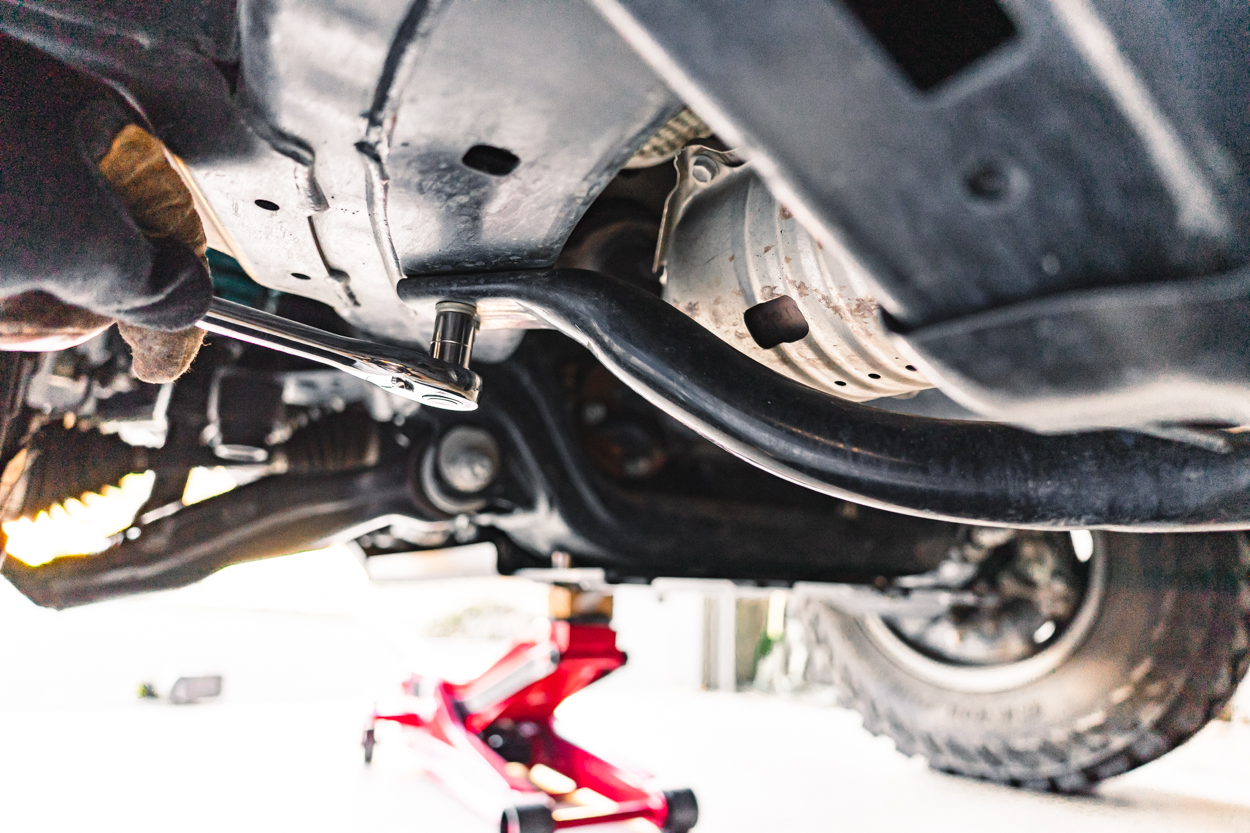 There are two cross braces on either side, they are each mounted with four bolts. 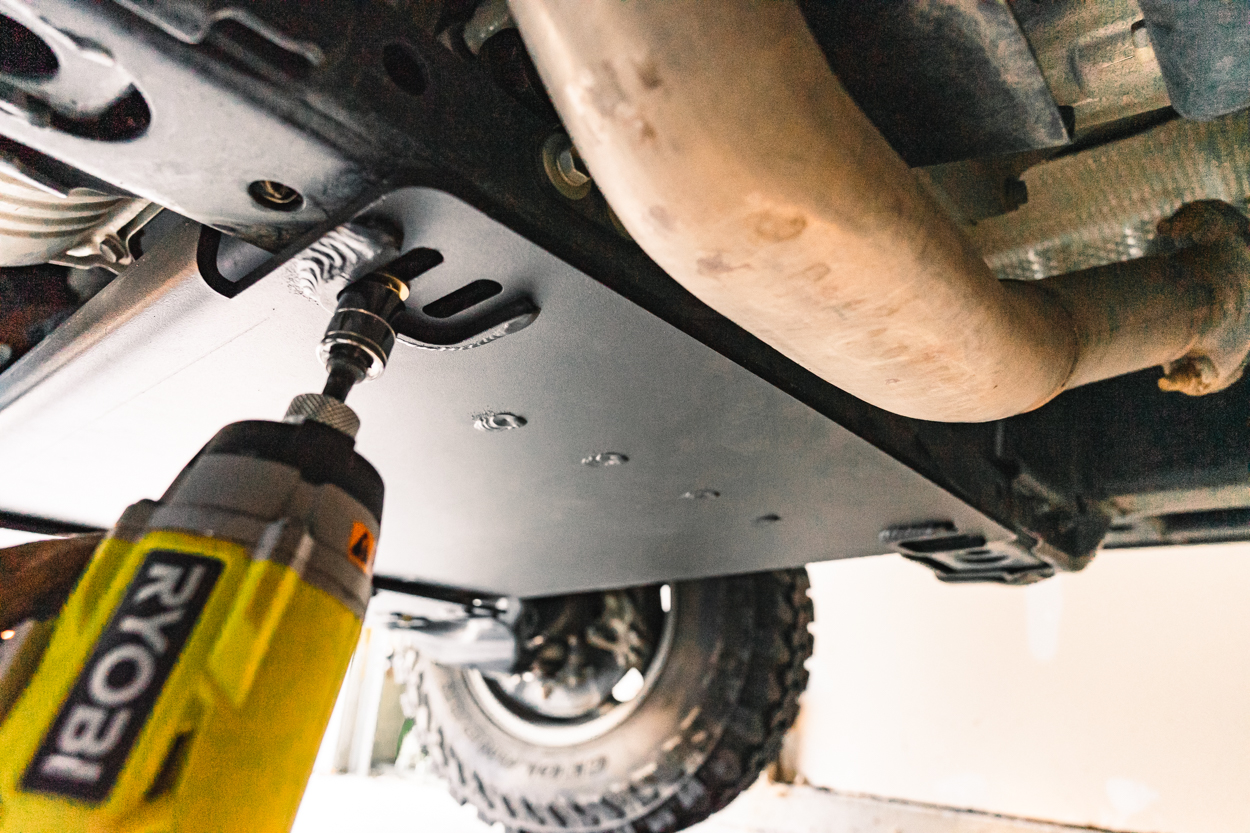 First, position the transmission skid plate so that the slide-on nuts (as seen in the first step for this skid plate) are between the front engine skid plate and frame crossmember (you want the plates to “step down” towards the back).

The rear of the transmission skid plate will be secured with the provided hardware (four 13mm bolts). Loosely install these until final positioning.

Next, loosely install the front four 14mm bolts that attach the transmission skid plate to the front engine skid plate. 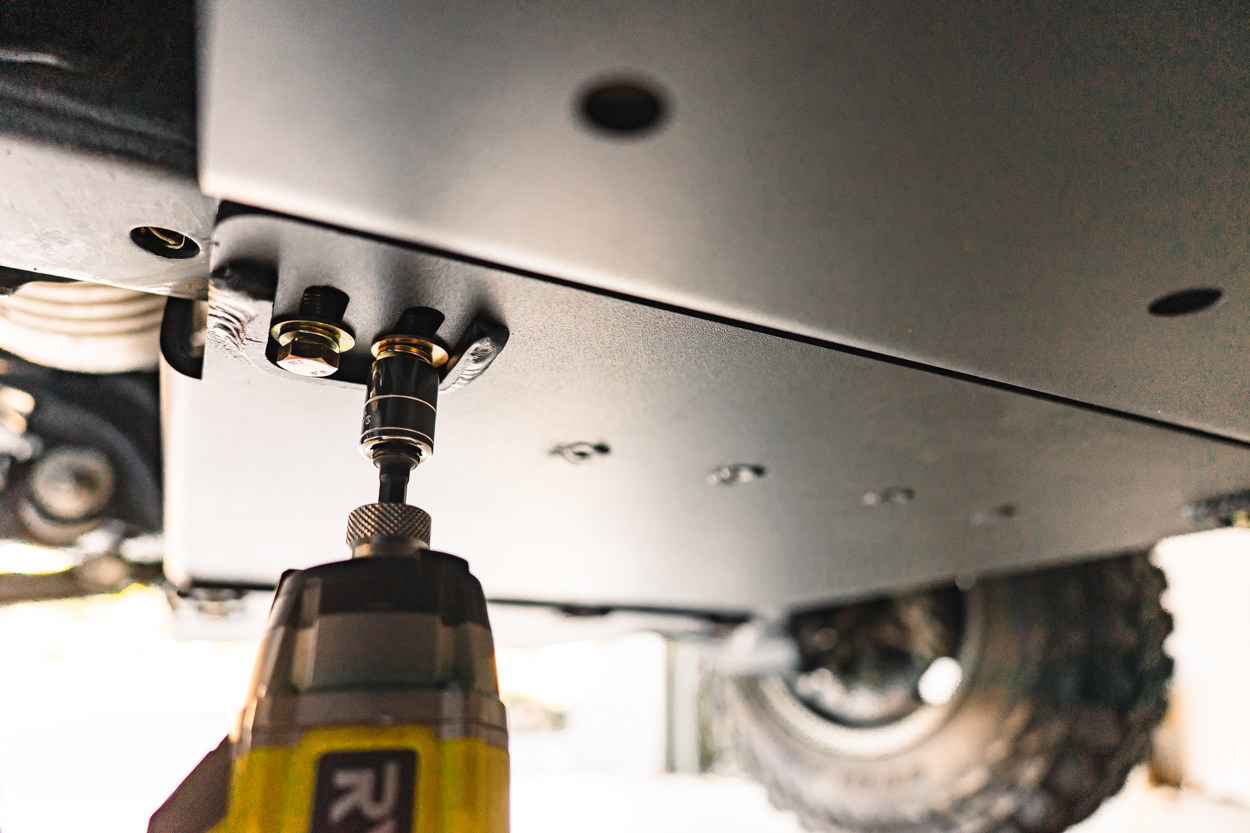 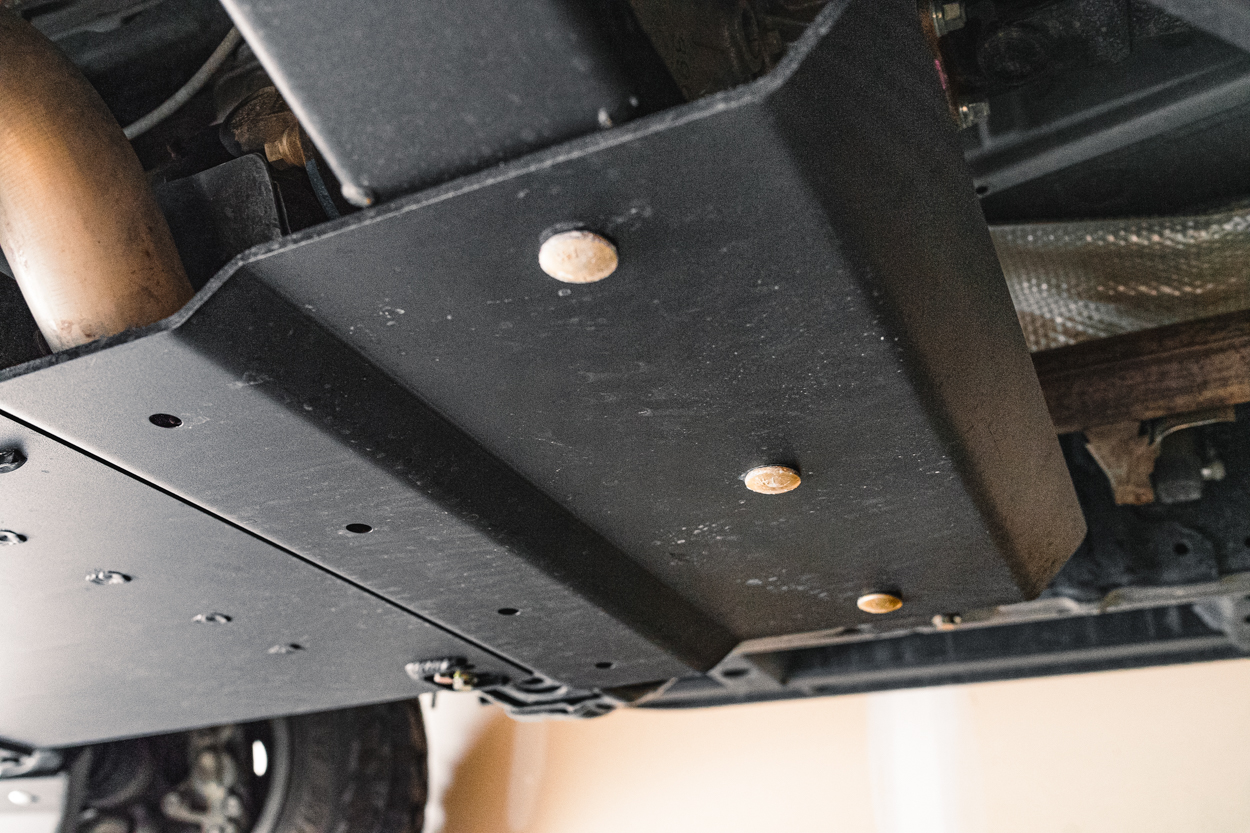 The transfer case skid is the last piece in what’s considered a “full skid set”. It also takes a little more work to install than the previous two. This is because to securely mount a plate over the transfer case, an additional bolt-on cross-member is required. This is partially why full skid plate packages cost significantly more than just a front engine one.

Protecting your transfer case is just as important as protecting the rest of your undercarriage, especially if you’re off-roading. The transfer case is responsible for your 4×4 and 4LO functionality. Catastrophic damage to this component means you’ll be limping back to the trailhead in 2WD. 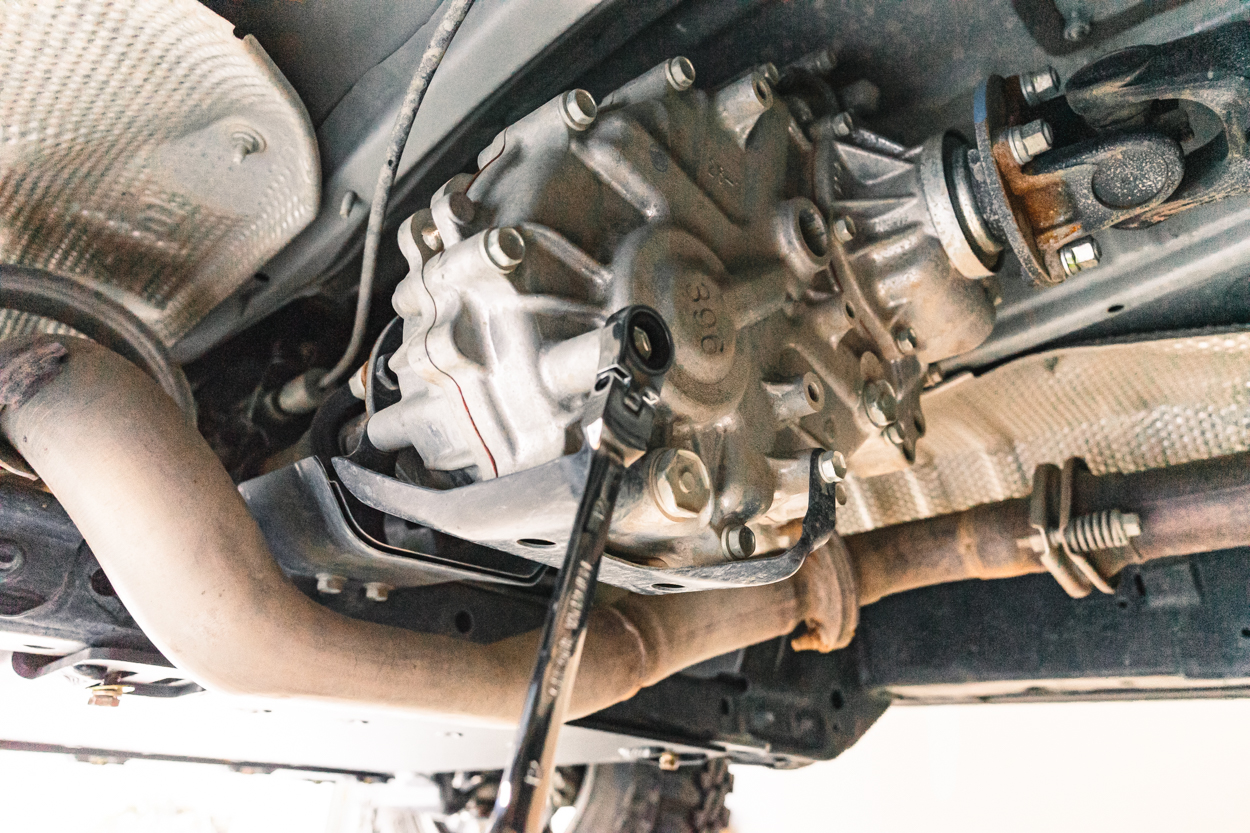 There are four 14mm bolts to remove this factory skid plate. 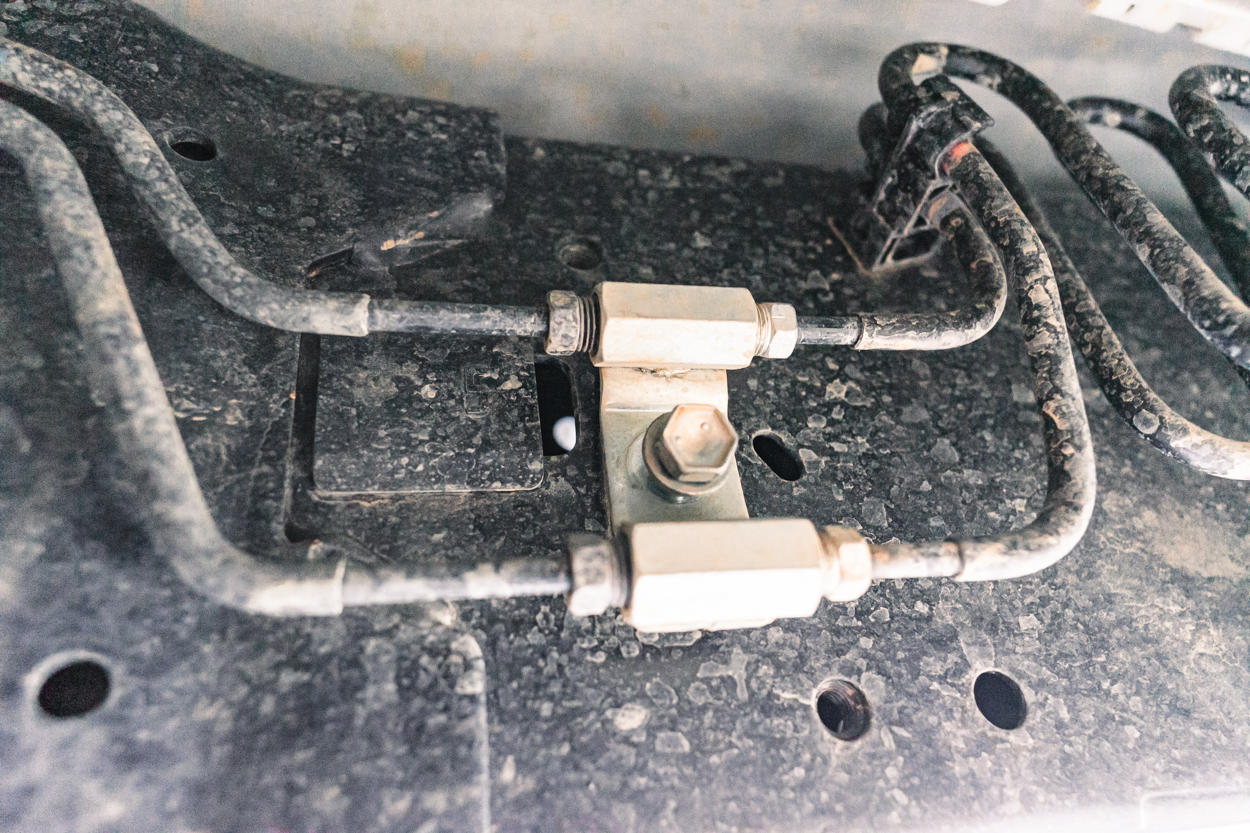 Remove the single bolt securing the brake line and the adjacent plastic clip. The plastic clip can be removed from the inside driver’s side of the frame. Save the bolt for later as it will be reused. 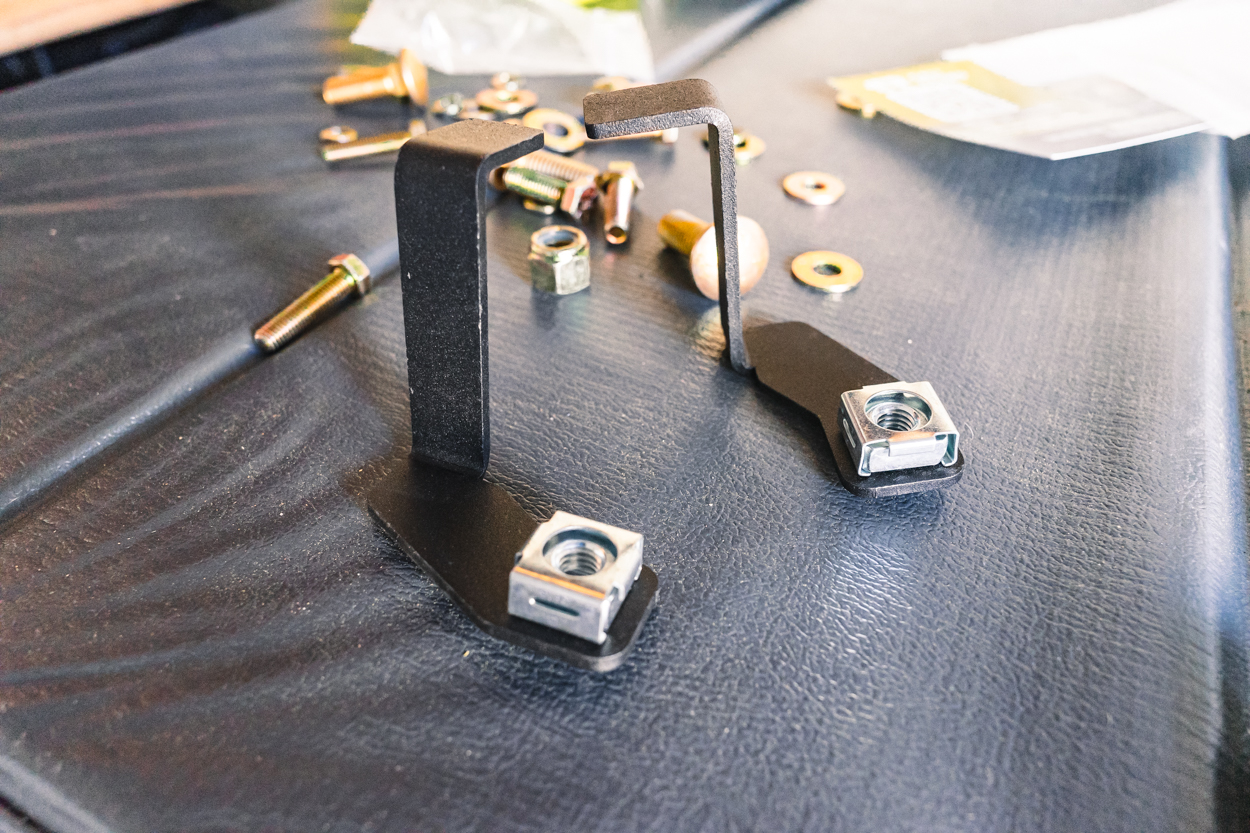 First, you’ll need to assemble the metal holders for the crossbar nuts. Install the provided square nuts into the brackets by squeezing and clipping them into place. There is a 1/2″ sized hole in the front where the brake line is that the square nut will insert over. 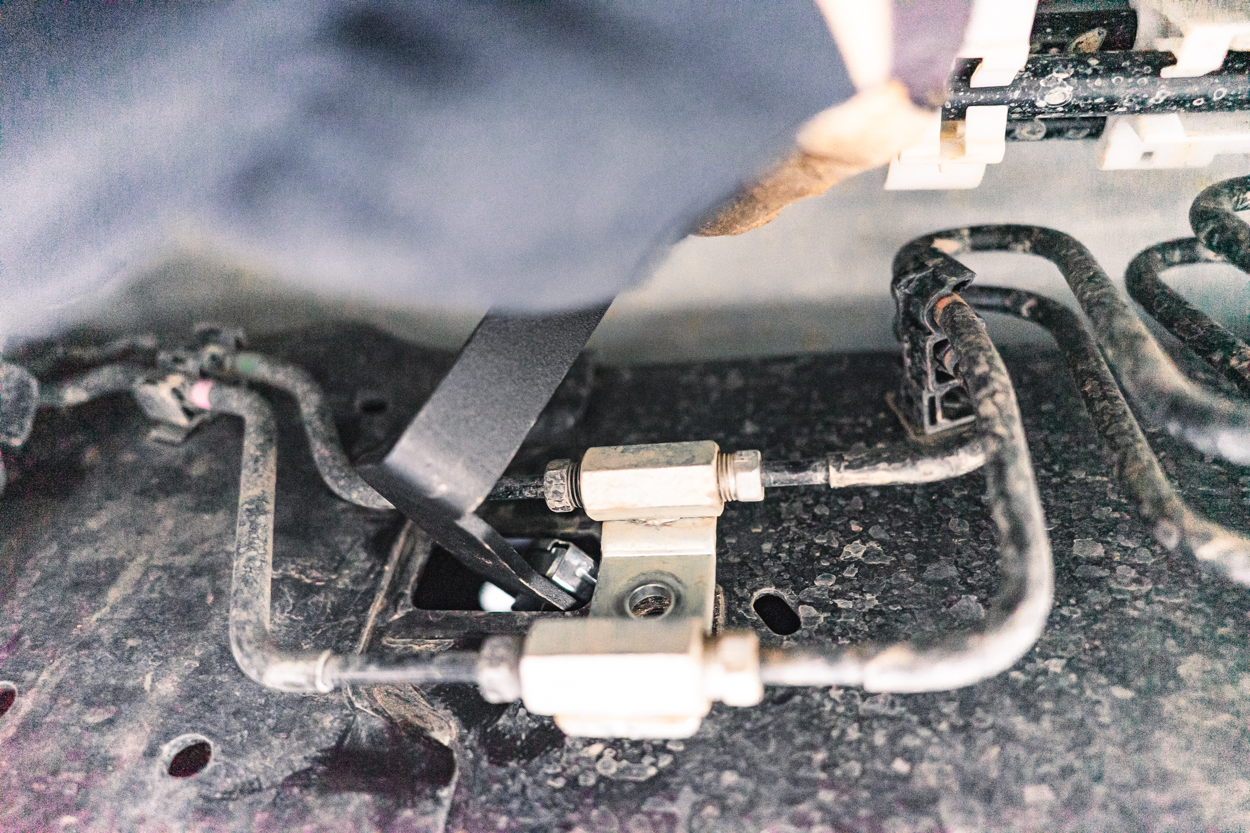 To position the handle, insert the square nut end through the frame where you removed the plastic slip earlier. There are driver and passenger-specific handles, so keep that in mind. 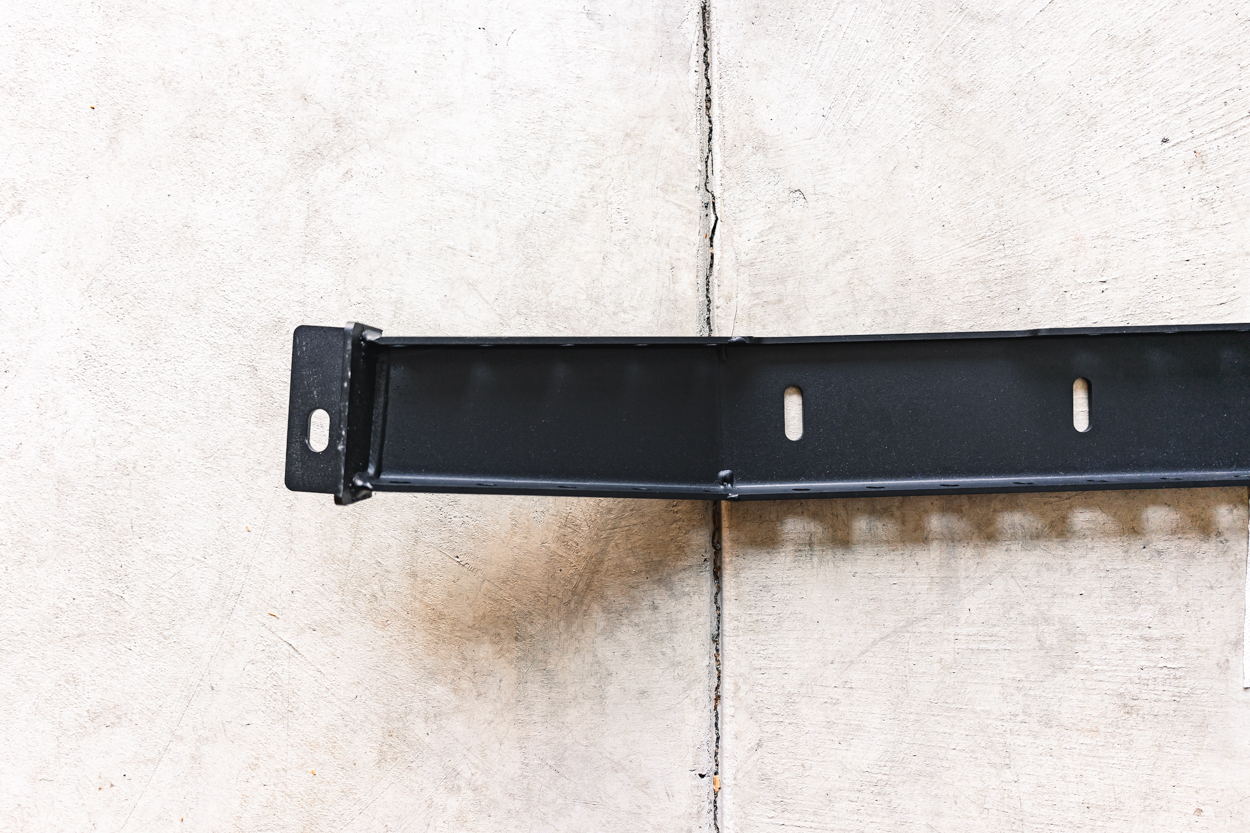 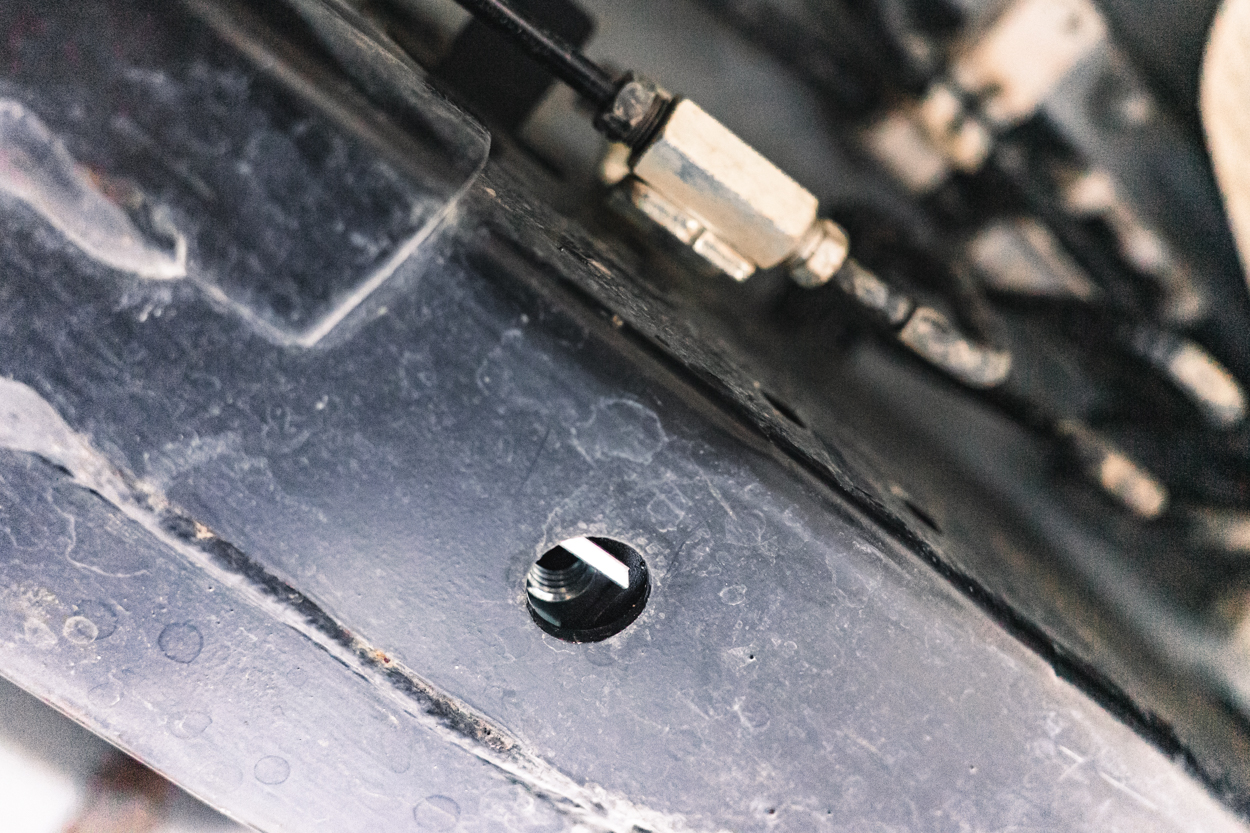 Position the crossbar so that its outer mounting holes line up with the hole your square nut is placed over. 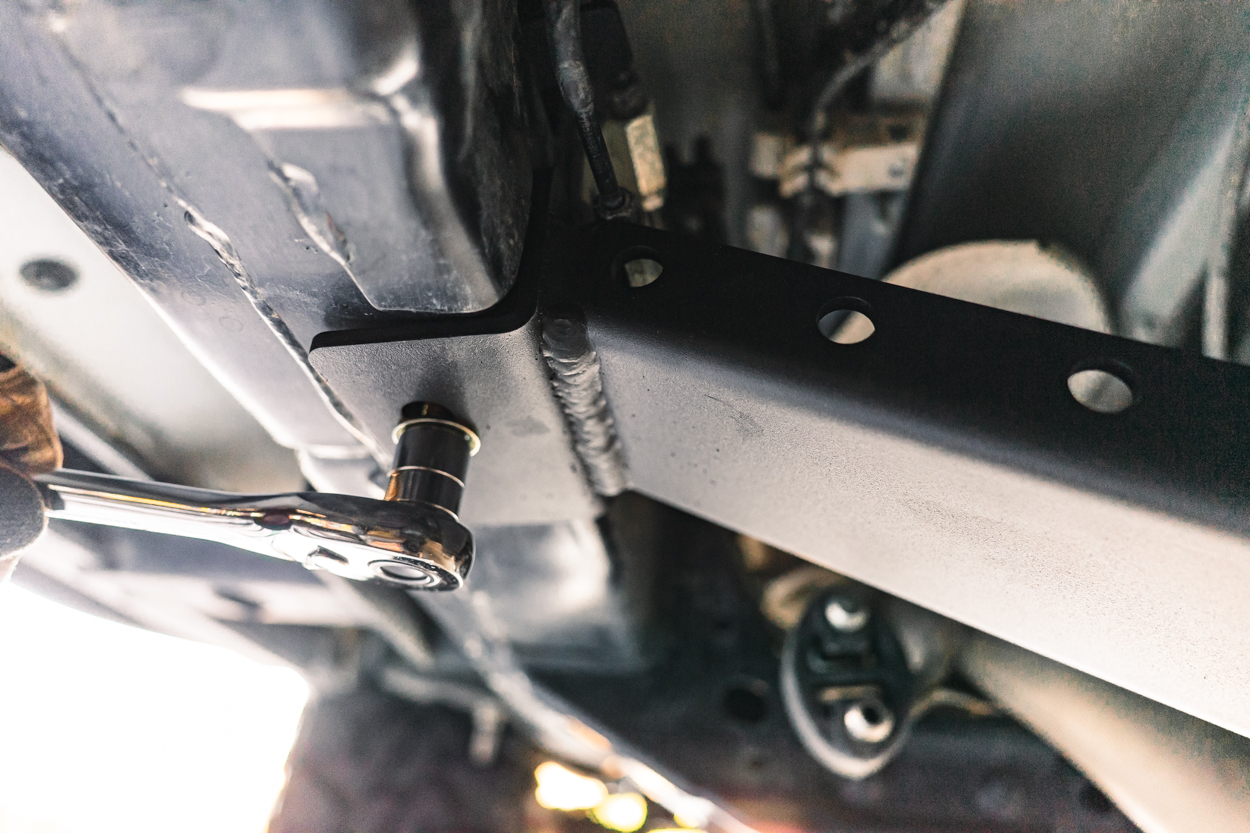 Thread and tighten down one supplied bolt (14mm) on each side.

Reinstall the brake line bracket with the single bolt that you removed earlier, the plastic clip will not be reused.

Remove the rear hardware that secures the transmission skid plate and slide the transfer case skid plate under it. Next, reinstall the four 13mm bolts. 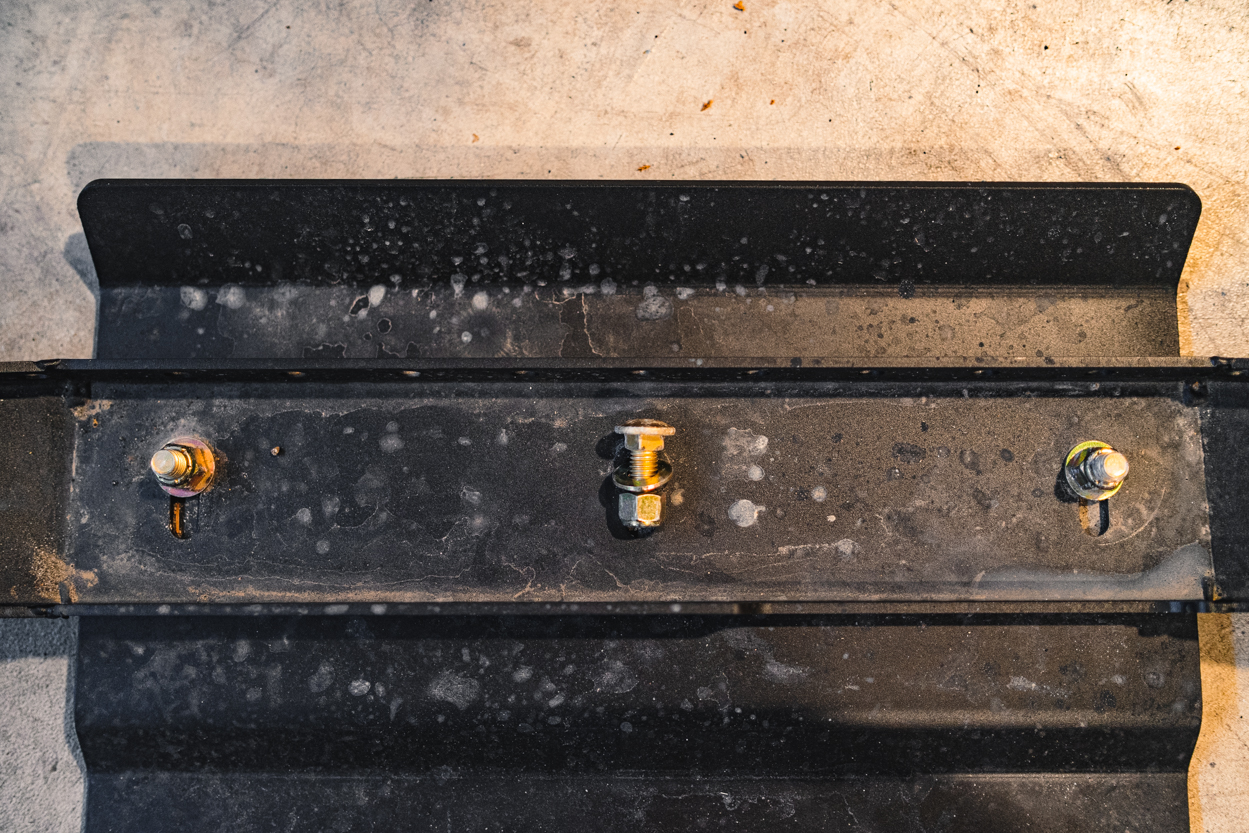 Use the three supplied carriage bolts, 19mm nylon locking nuts, and washers to install the skid plate to the crossbar. I recommend using a ratcheting flex-head wrench as the space is tight. 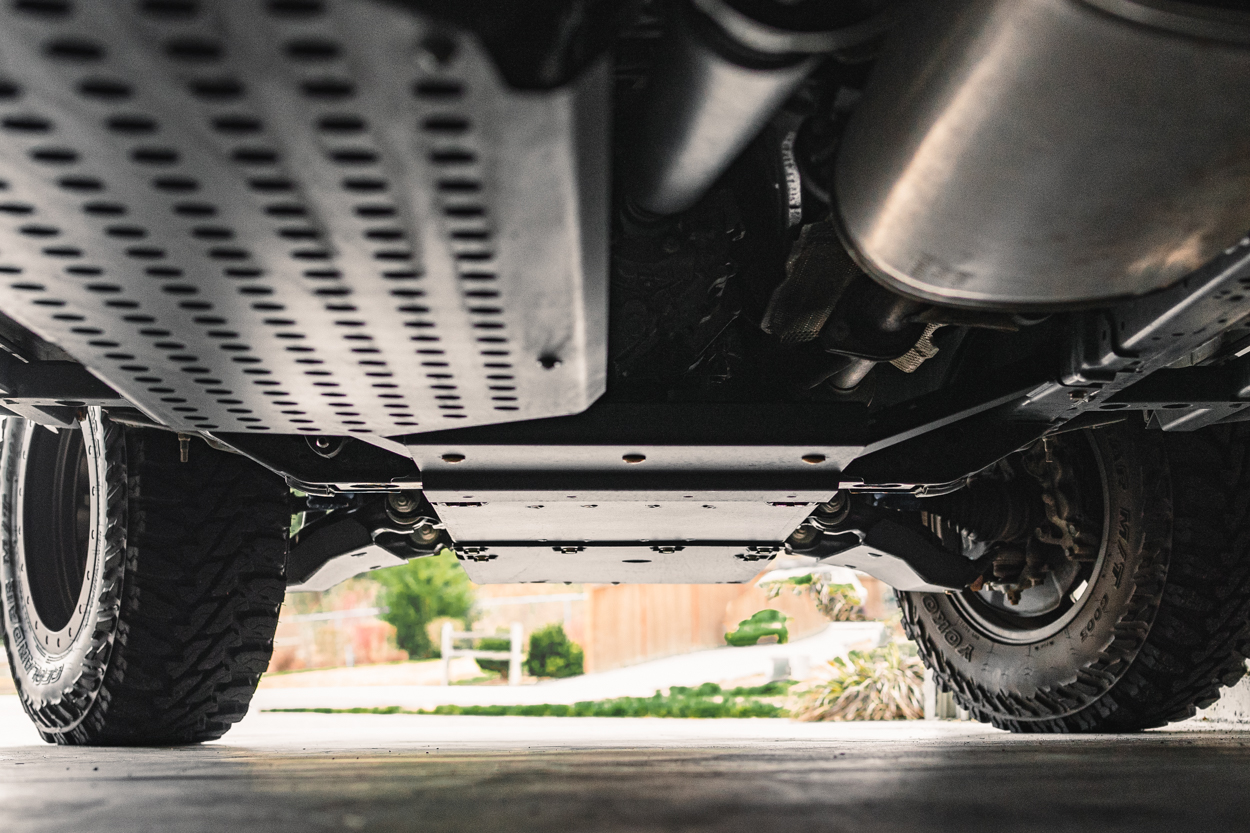 Once all three skid plates are in position, tighten down all of their respective bolts; there should be 19 in total. 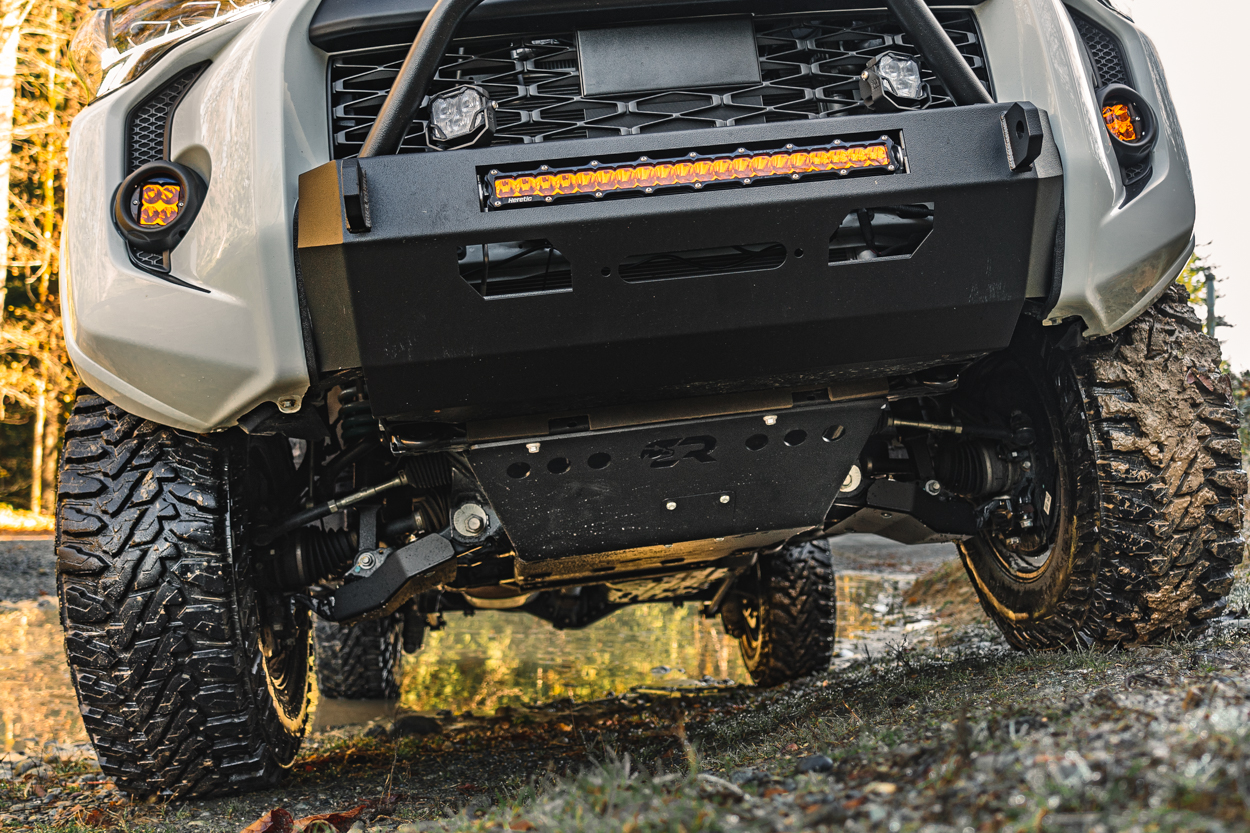 If you’ve ever shopped around for skid plates, there are a handful of companies that make skid plate sets for the 5th Gen 4Runner. The Cali Raised LED full belly skids are unique in their unmatched comprehensive coverage. This ensures that not only can your underside protection be a one-stop shop, but that they’ll also work perfectly together and have a consistent fit and finish.

In total, you’re looking at about 55 lbs. total weight for the full belly skids (aluminum). That’s roughly only 20-25 lbs. more than all of the thin steel factory skid plates. If you’re still running on the factory suspension, this shouldn’t warrant the need to upgrade it (yet). Albeit, if you’re looking to add aftermarket skid plates, that’s probably on your shortlist anyways. 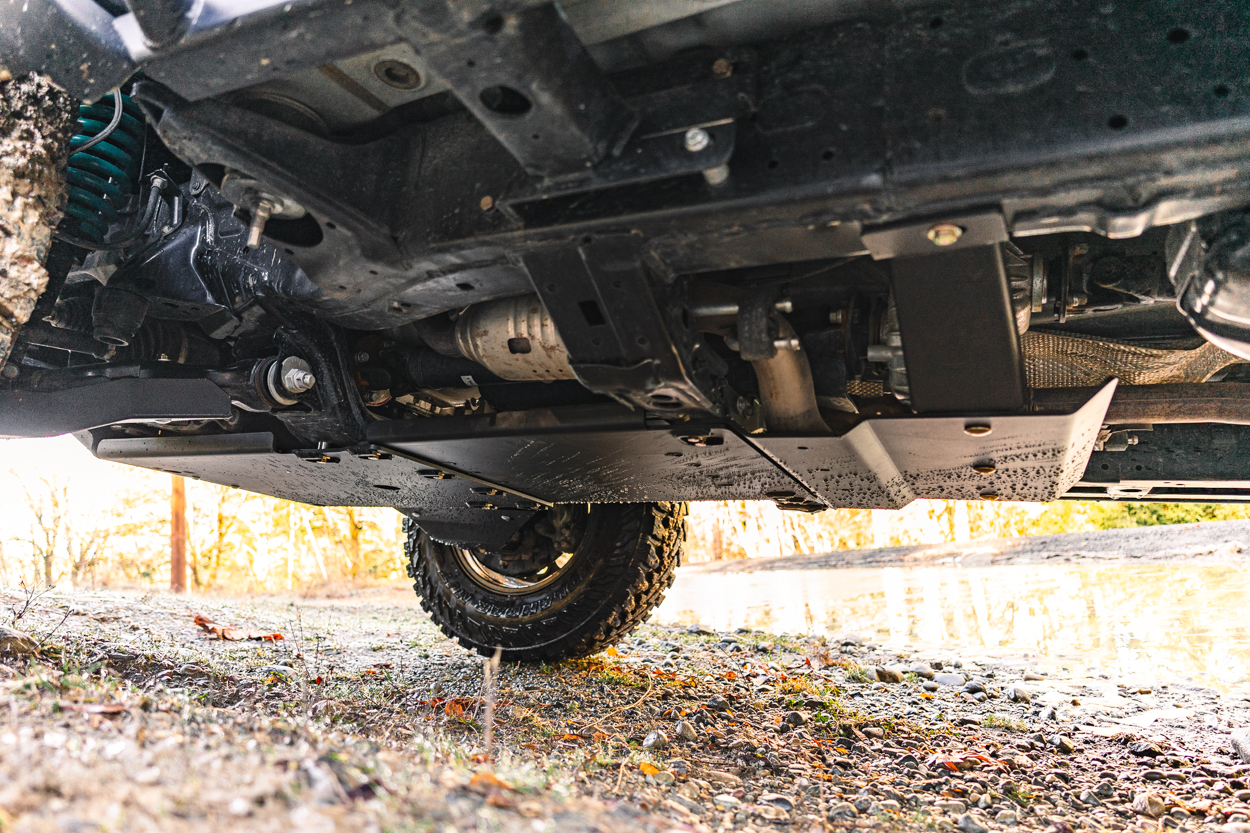 I’m also excited about the catalytic converter shield that Cali Raised LED also just released for the Toyota Tacoma. It will seamlessly integrate with their skid plates, so it should be an easy add-on if you already have them. They’ve already confirmed that a 4Runner version is in the works, so keep an eye out for a review of that one! This certainly adds to how much coverage the Cali Raised LED full belly skids provide.

Cali Raised LED may be a new entry into the 4Runner armor market, but they’ve been making Tacoma armor for years. Quality and coverage shouldn’t be a concern because of this, so if you’re in the market, definitely check them out.

Any thoughts on the fuel tank skid? Are you going to cover it in a different article? Thanks!

Yes there’s an article coming for that real soon! It’s been good so far, I like that there are plenty of drainage holes for water.