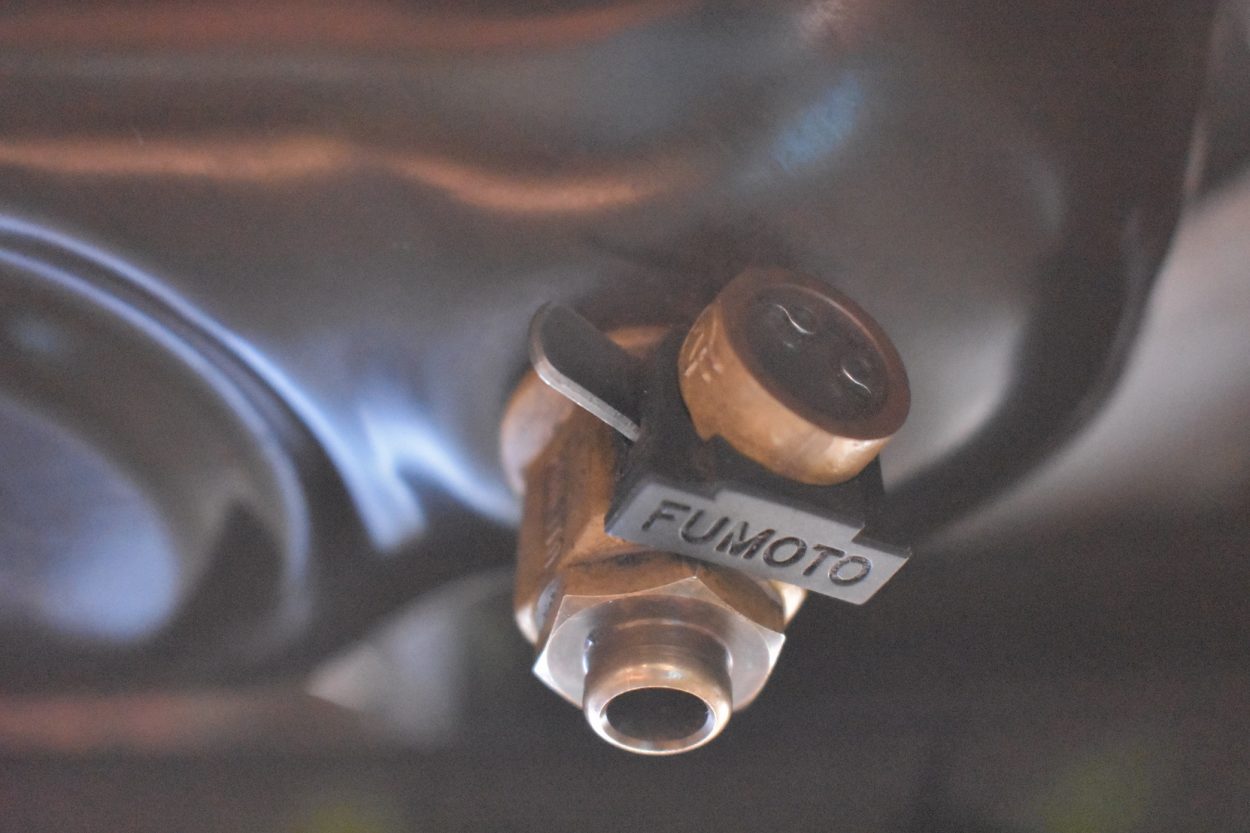 Have you ever wondered if there is an easier, faster, and cleaner way to drain your oil? If you are like me and perform your own maintenance, this was a question I’ve asked even before owning the 4Runner.

With a normal oil change, you pull the drain plug and you hope to not have oil splatter everywhere. Even with a large oil pan, this can be a challenge. Those days are over with the Fumoto oil drain valve. This was one of the cheapest yet also one of my favorite mods that I’ve added to my 4Runner.

The Fumoto oil drain valve is just a small brass valve that threads into your previous drain plug location. It comes with a lever to shut the oil flow on and off. To prevent the accidental flow of oil, the lever locks into place with a tough plastic guard. To make things even better, the company offers a hose kit that connects to the valve so you can direct the oil exactly where you want it to go. I mean come on, it doesn’t get any better! 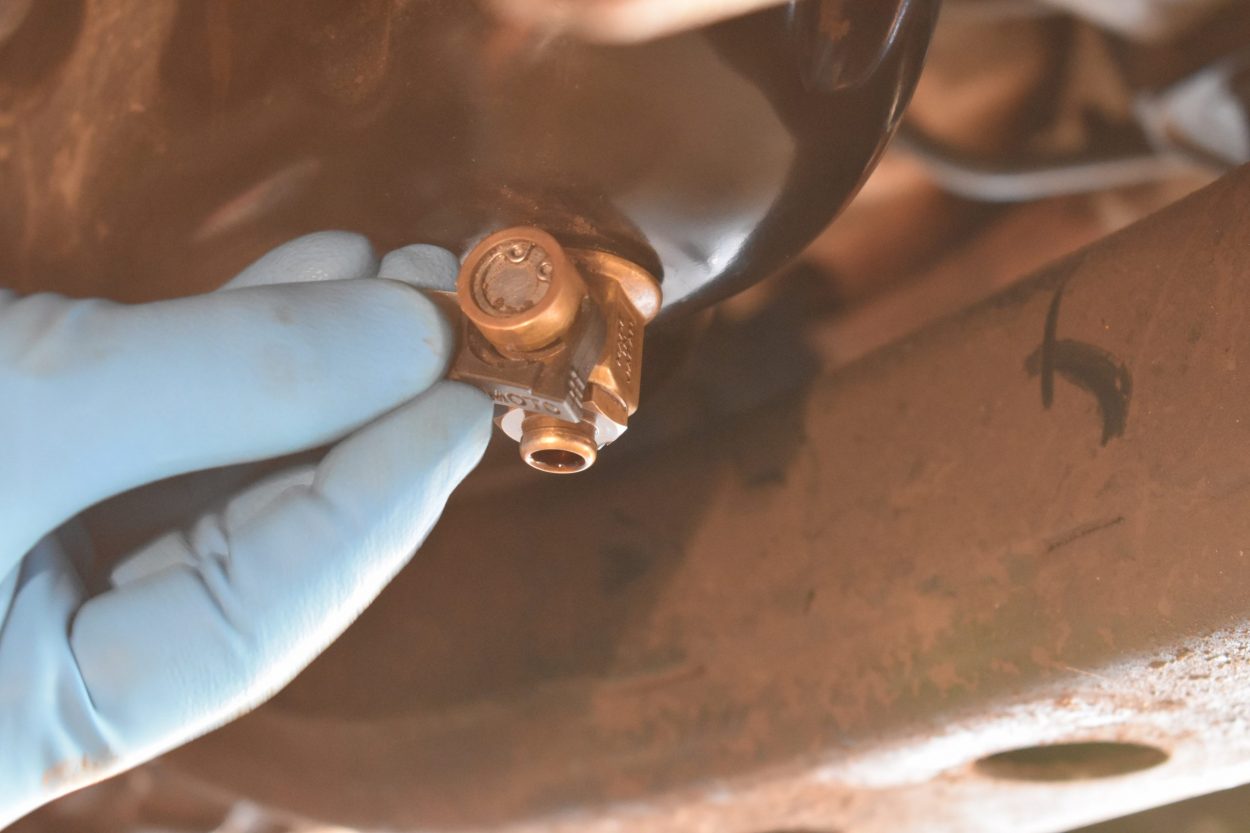 Fumoto has been around since 1976, making valves for many different applications and vehicle companies. They have even been granted genuine parts status in Japan and the United States by some of the largest companies, including Toyota. Stateside, they supply companies like Cummins, Caterpillar, Peterbilt, and many others. With trust like that, you know you are getting a quality well built product.

The valve itself will not open on its own. The lever locks in place and comes with a clip that can only be attached when the lever is in the locked position. It is double-sealed from both sides to prevent leaks. Construction consists of a forged brass body with stainless steel internal components. To top it off, you get a lifetime warranty. 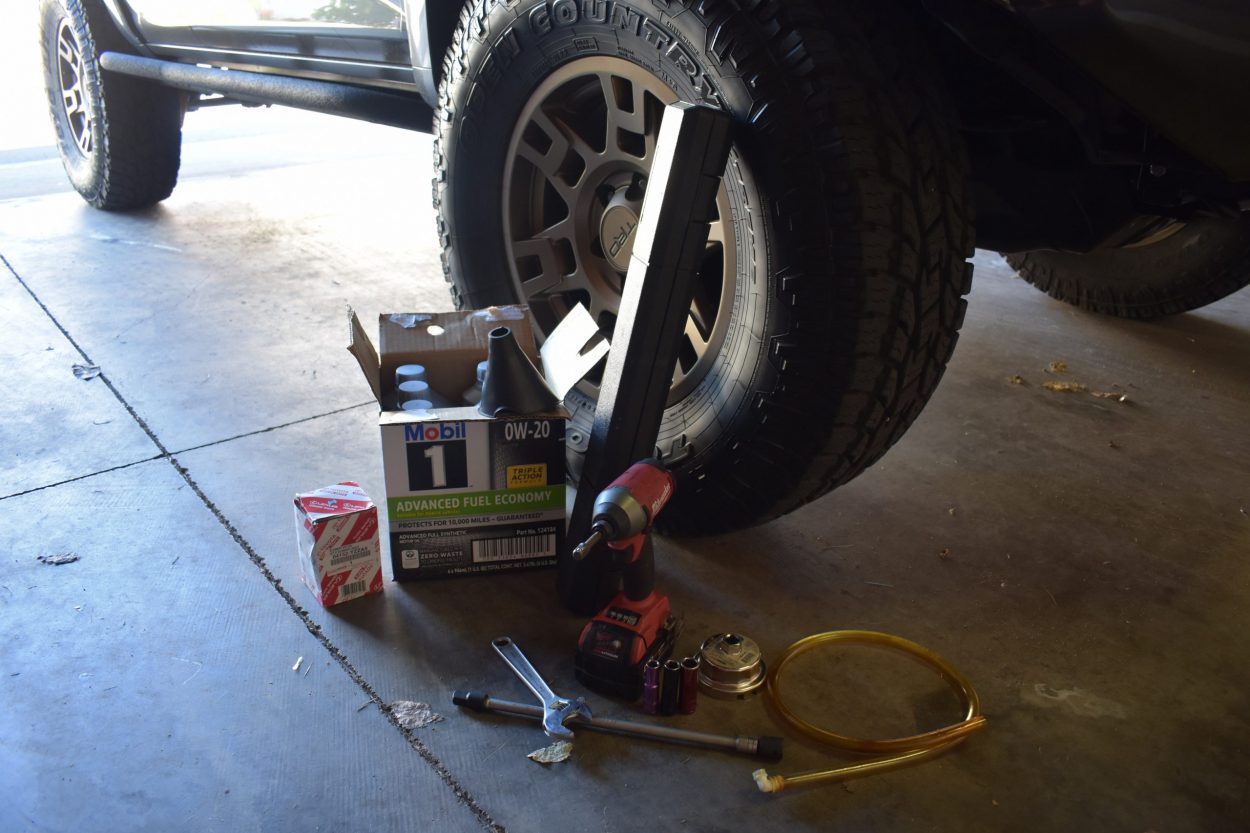 The tools and supplies required to do this would be the same as if you were to change your oil. The only added tool would be a crescent wrench in order to tighten the valve to your drain pan. No need to get a new gasket, they provide one when purchasing the valve.

You don’t have to purchase the hose kit, but it is a really nice thing to have, and only costs $6. Without the hose kit, the oil will still come out of the valve in a cleaner, way less messy fashion than without the valve. I personally love being able to direct the flow of oil so you can have the oil container in a different location out of your way while you work. 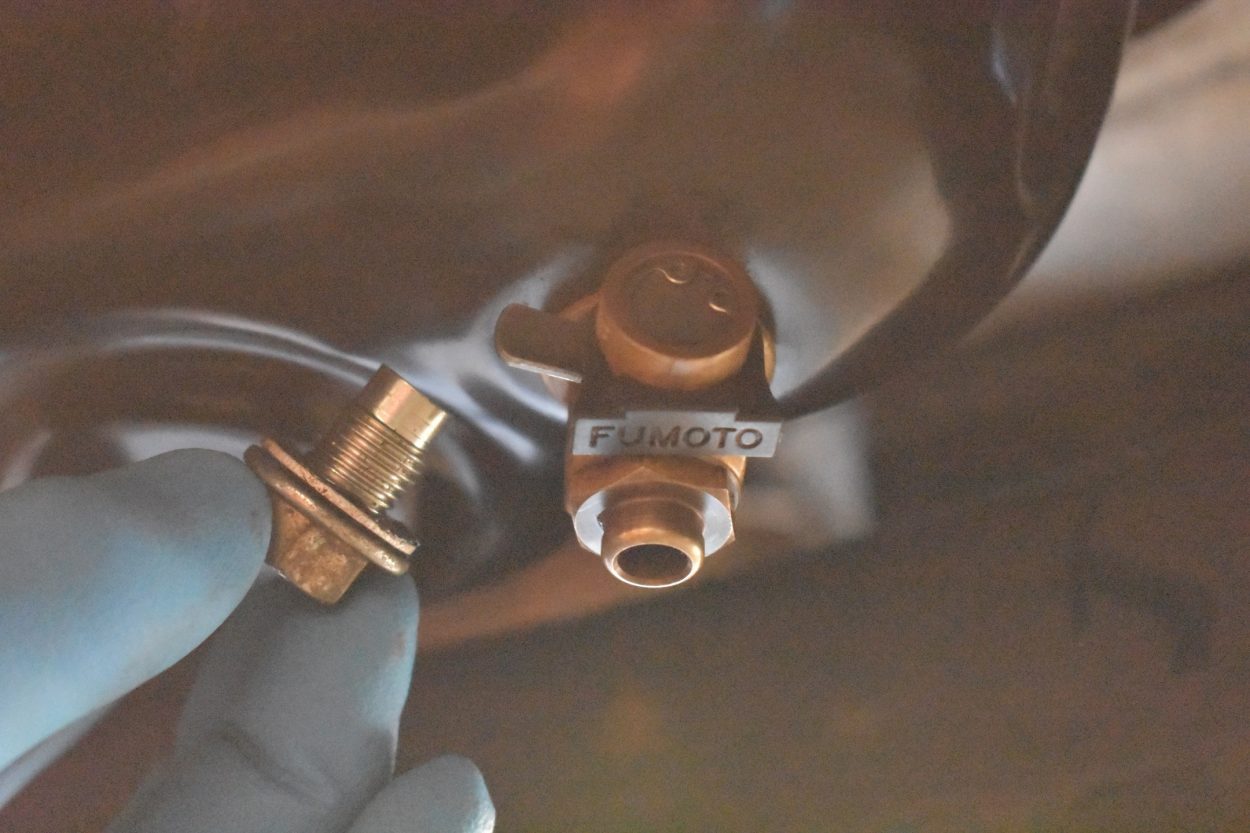 I don’t know if I would claim this to be a “process”, it’s too easy. The only pitfall to this installation is you would need to initially pull your stock drain plug for your oil pan in order to install the valve. I recommend doing it when you have to change your oil, that way you can do it all at once. Plus you get to test out the product, which is awesome. 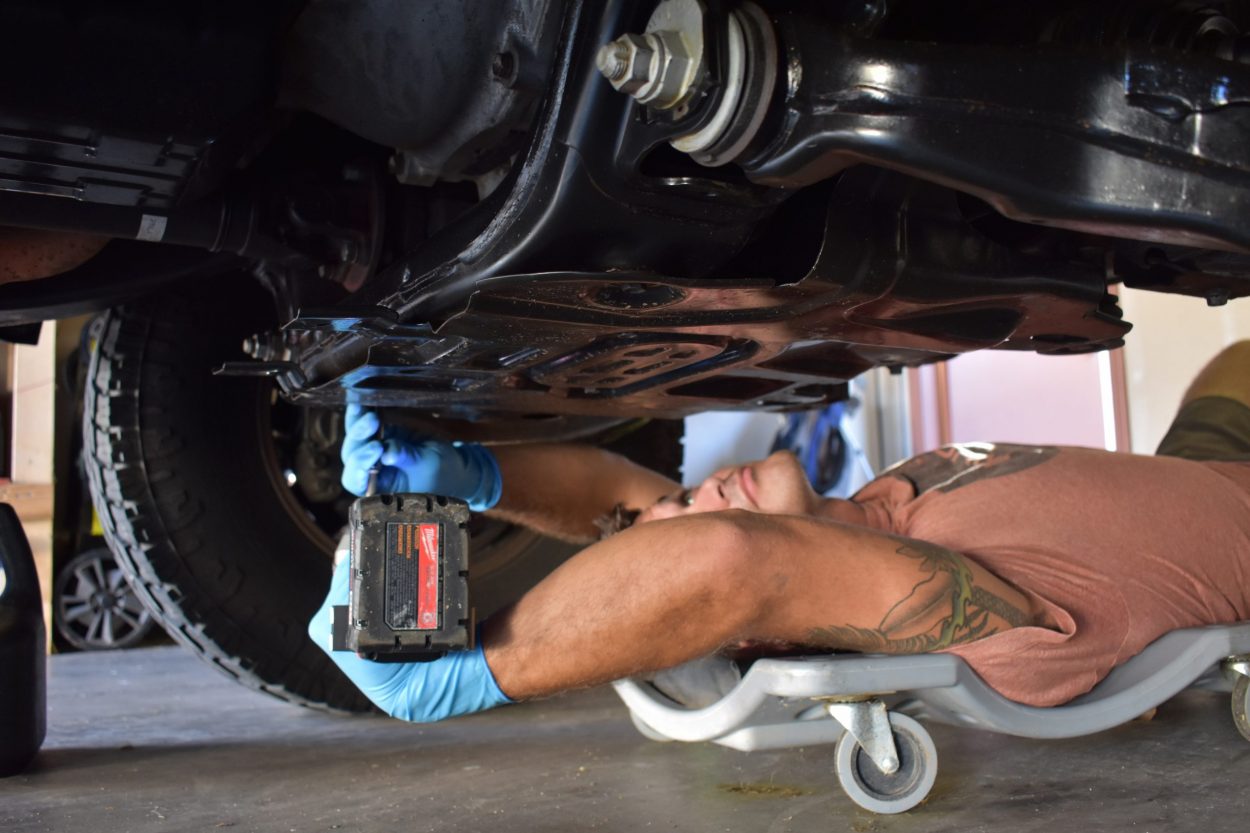 Using your 10mm and 14mm sockets, remove your front and center skid. You will need to pull the center skid to make your life easier by installing the valve. I also like to inspect as many components as possible when doing maintenance. 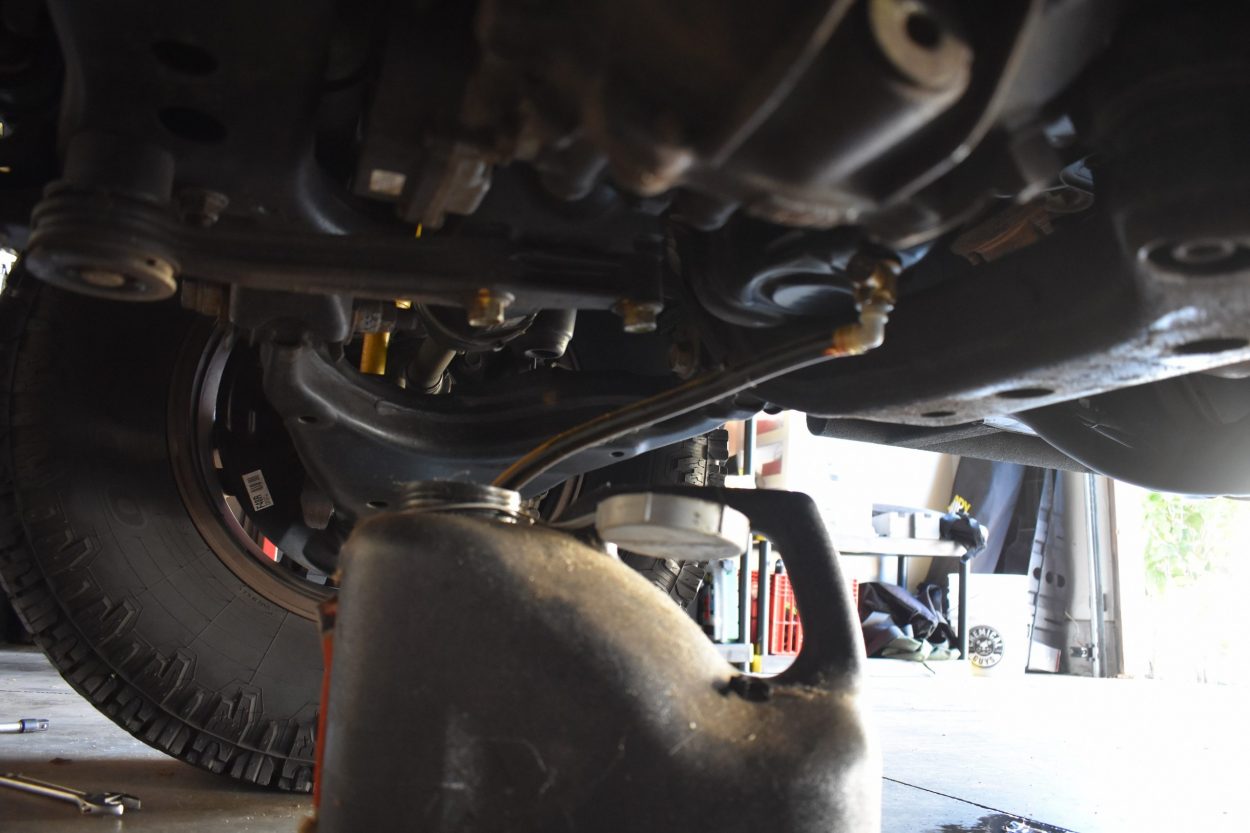 Personally, I wanted to use the valve upon installation, so I installed the valve they connected the hose to test it out. Just quickly pull out the OEM drain plug and install the Fumoto valve. Then, complete the rest of your oil change with ease. If you are not down to swap over really fast, just drain your oil as normal and install the valve after the oil has drained. 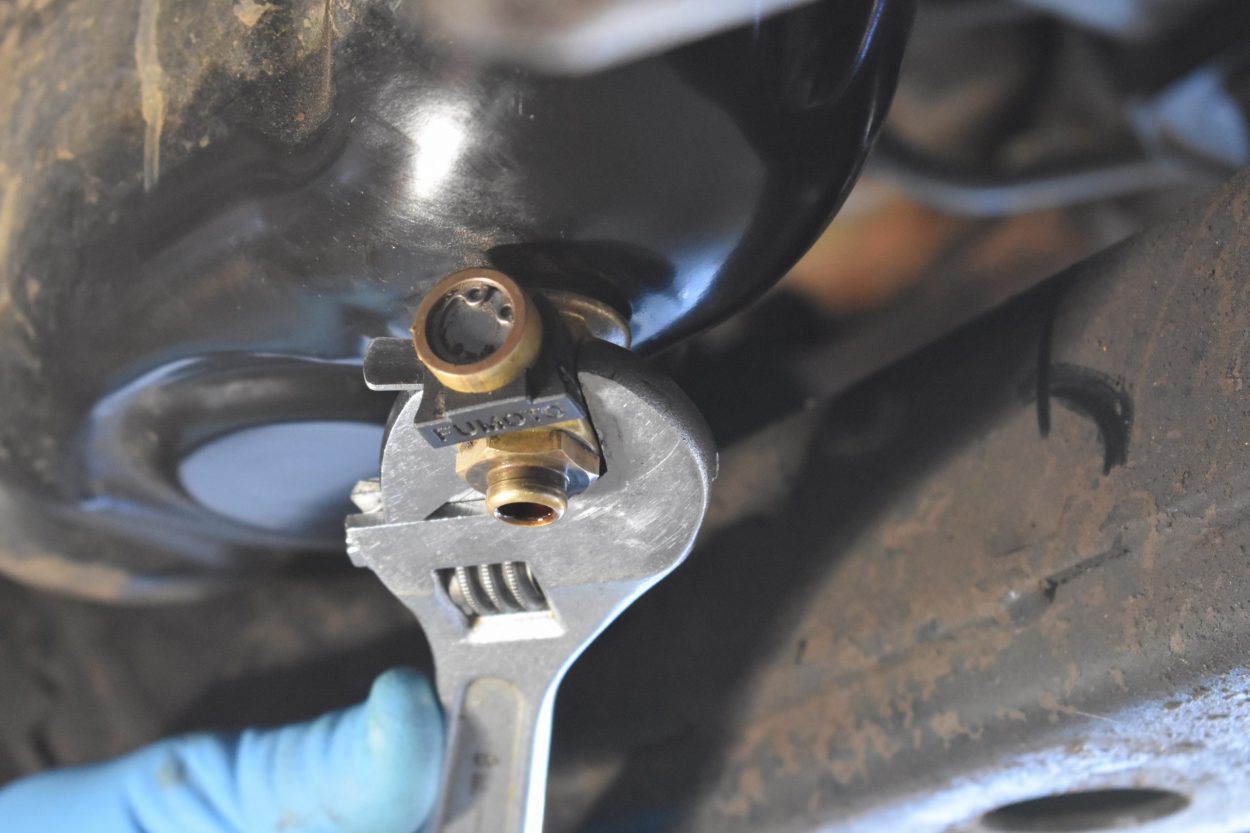 Fumoto recommends installing hand-tight, then using a crescent wrench to tighten a 1/4 turn more. Do not over-tighten! For reference, the stock drain plug torque is 30ft-lbs. 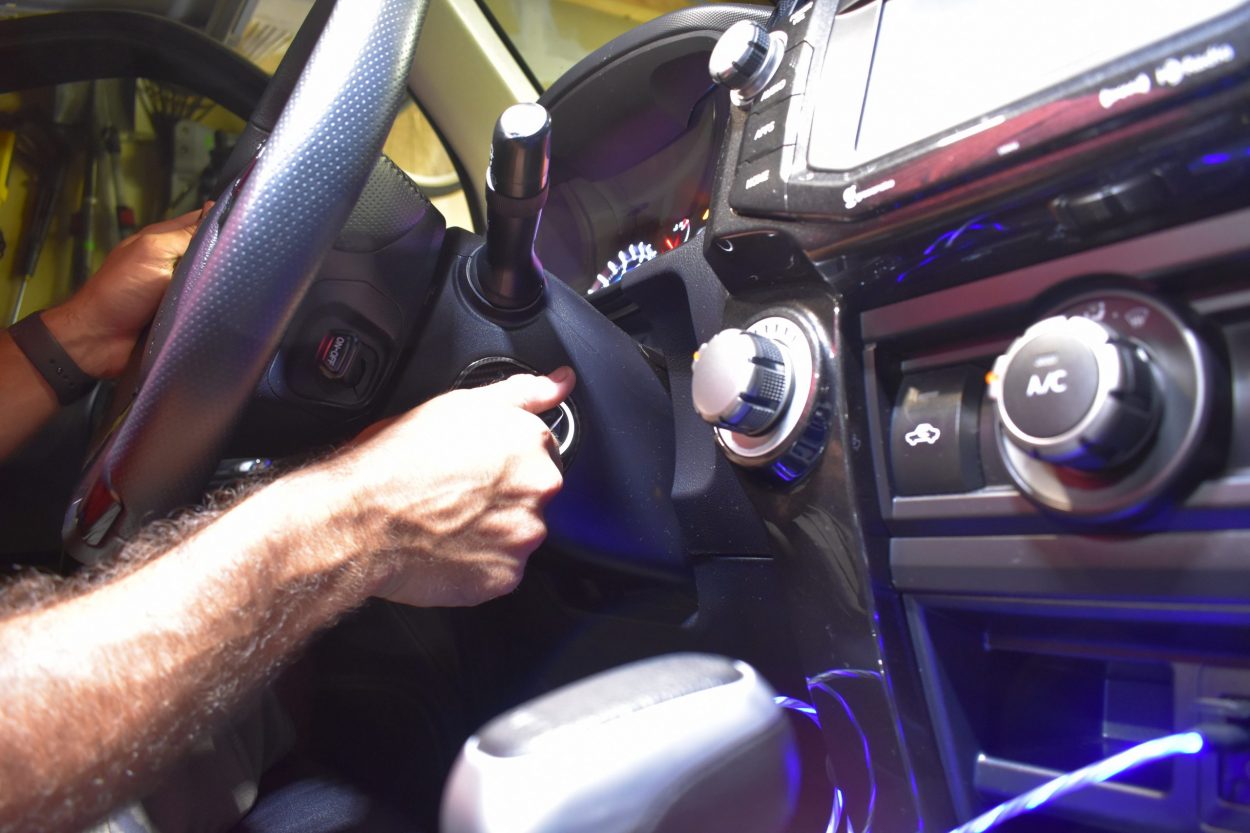 Once you have either completed an oil change or just installed the valve, make sure you have no leaks before installing your skids. 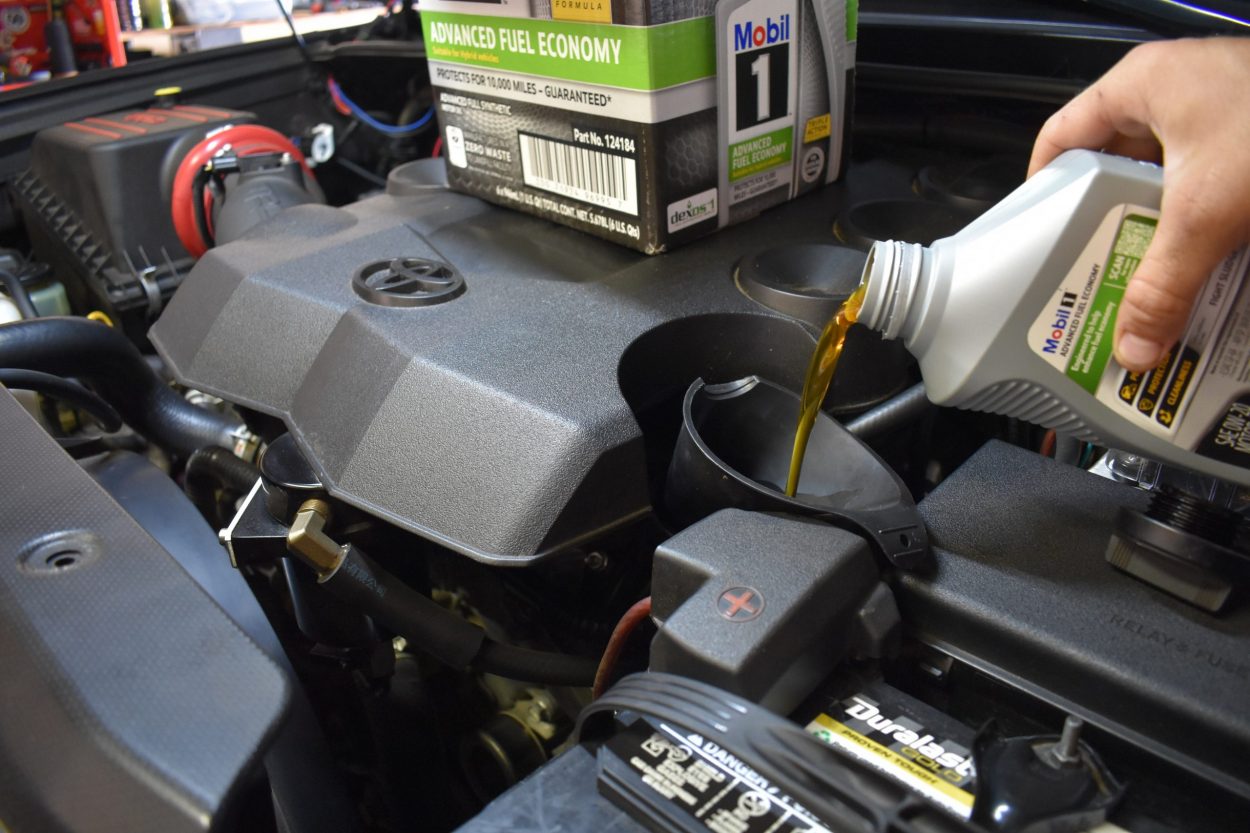 Continue with the remainder of your oil change as normal. Even if you didn’t completely drain your oil to install the valve, you’ll likely need to top off your oil after what was lost when removing the original oil plug.

When installing the oil filter, the filter drain cover is 9ft-lbs and the housing is 18ft-lbs. When finished, don’t forget to install the locking clip over the lever, Then install your skids. It probably won’t hurt to add a splash of oil as well if you lost any while swapping over to the valve. 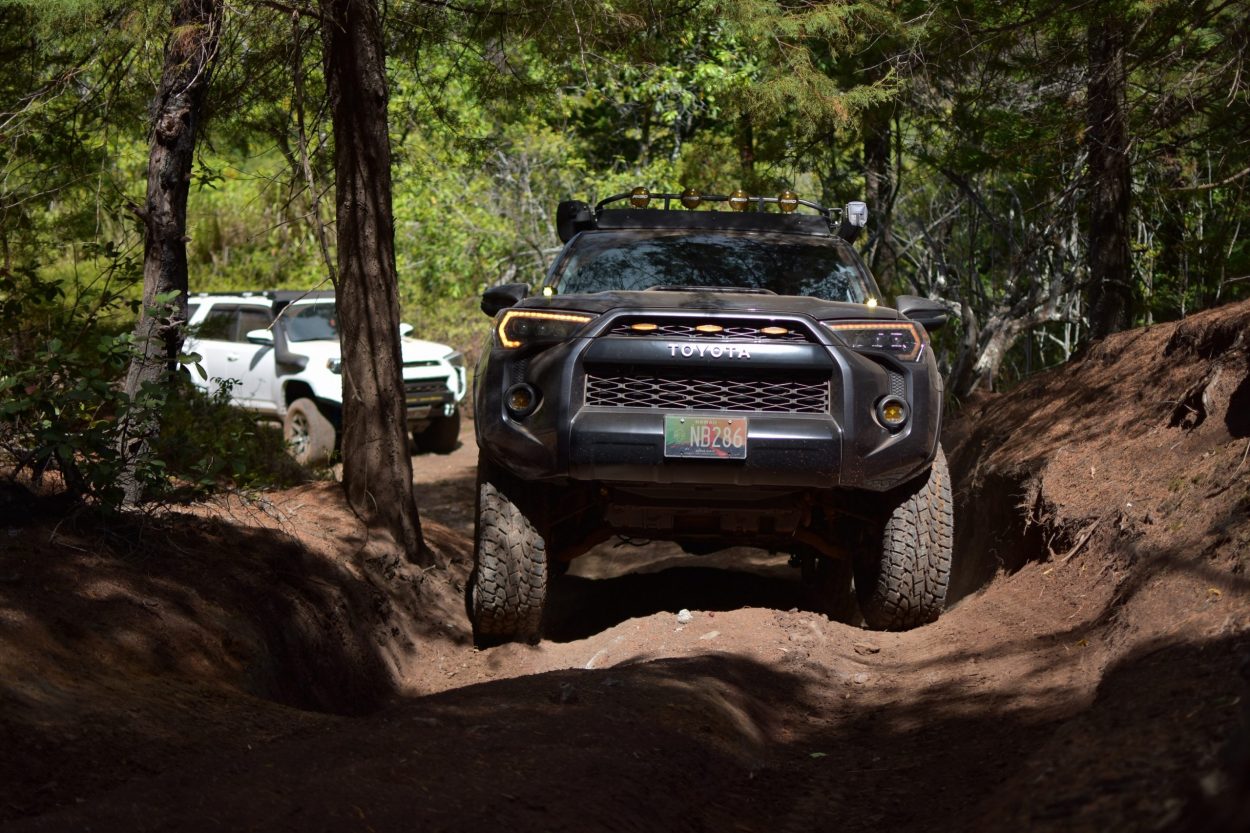 The valve has held up flawlessly against the elements, and many oil changes. One of my main concerns was the valve being able to come unlocked somehow, with the clip installed it doesn’t seem possible. Then again, my next concern would be the locking clip falling off, getting bumped off, or getting washed away. I still have the same clip on the valve from when I purchased the kit, so don’t worry about the locking clip.

After seven oil changes and approximately 45,000 miles, there isn’t anything I can complain about. There aren’t any leaks, and the hose kit I purchased for $6 has held up as well. I do recommend trimming the hose to your desired length as it will make it helpful during oil changes, especially when underneath the vehicle that isn’t on jacks or ramps.

The only way I could foresee something happening to the valve or its components would be landing directly on your skid very hard, where the valve sits. I have stock skids and have had zero issues, but it wouldn’t hurt to have aftermarket heavy-duty skids if you are worried about landing directly at the valve. 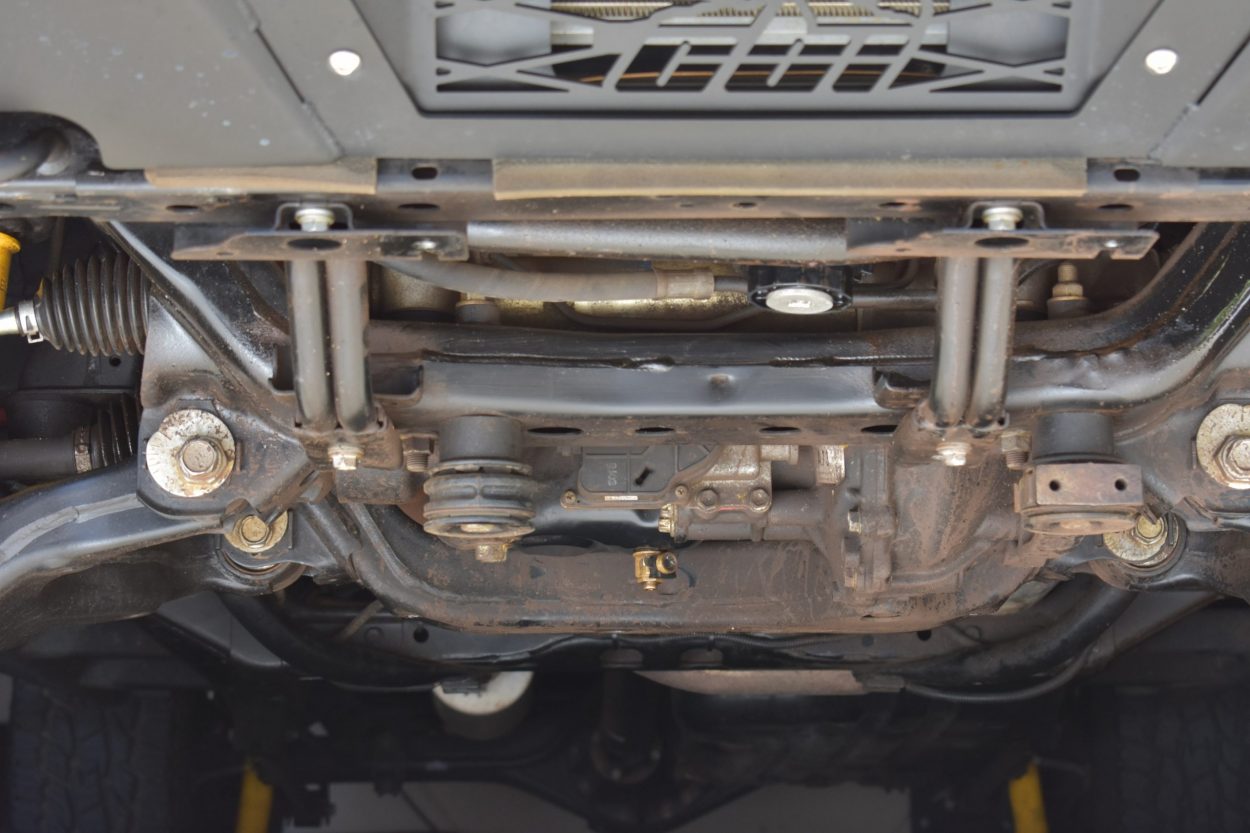 Overall I love this product and recommend it to all vehicle owners that perform their own maintenance. Fumoto’s website allows you to search for the vehicle you want a valve for. The price of everything together is $36 so it’s hard to turn down. Next time you are coming up on your oil change, just spend a little extra and thank me later.

I don’t mind performing my own maintenance. Most of the time I enjoy getting the chance to turn a wrench. When it came to doing oil changes, I was tired of trying to soak up oil messes on the ground and on undercarriage components.

With the Fumoto oil drain valve, I look forward to how easy it is to change oil without making a splattering mess and coating my hands in oil. Now I can unlatch a lever and walk away knowing there is zero oil getting anywhere else besides my catch can. Save the time, and mess, and go grab one of these sweet valves for your future oil changes!

Near a coast line is where I belong. As long as I have surfing, or snowboarding ill be okay. Off-roading and getting off grid has become a newer passion that I\'ve grown fond of. Doing it all with the magnificent 5th Gen.

Been thinking about doing this upgrade. The only thing stopping me is, when you pull the stock drain plug the oil has a clear shot at getting out of the pan. If the valve sticks above the pan bottom at all, you’re left with a small puddle in the bottom of the pan. Not a big deal unless there’s some debris in the pan that now can’t get out. Probably over thinking this. Have you ever checked to see how far the valve extends into the plug hole? Thanks.

I see what you mean, and I never considered that. With the way the valve is designed I’d imagine that there would be a small amount of oil left in the pan along with possible debris. The threads on the valve might be a little shorter than the stock plug. It makes sense to want to see if there was debris in the pan. What you could do if you were considering buying a valve would be to drain the old oil first, then every oil change after it has drained, pull the valve off to check. Or just pull the valve every 2nd or 3rd oil change, just to check. On my next oil change ill pull mine to see if there is anything, I’ve not pulled it off since I installed it.

So if you pull the valve off 30% or more of the time, why use it at all? And why use something that could be a possible failure point for keeping oil in your engine? I just don’t see any advantage in this.