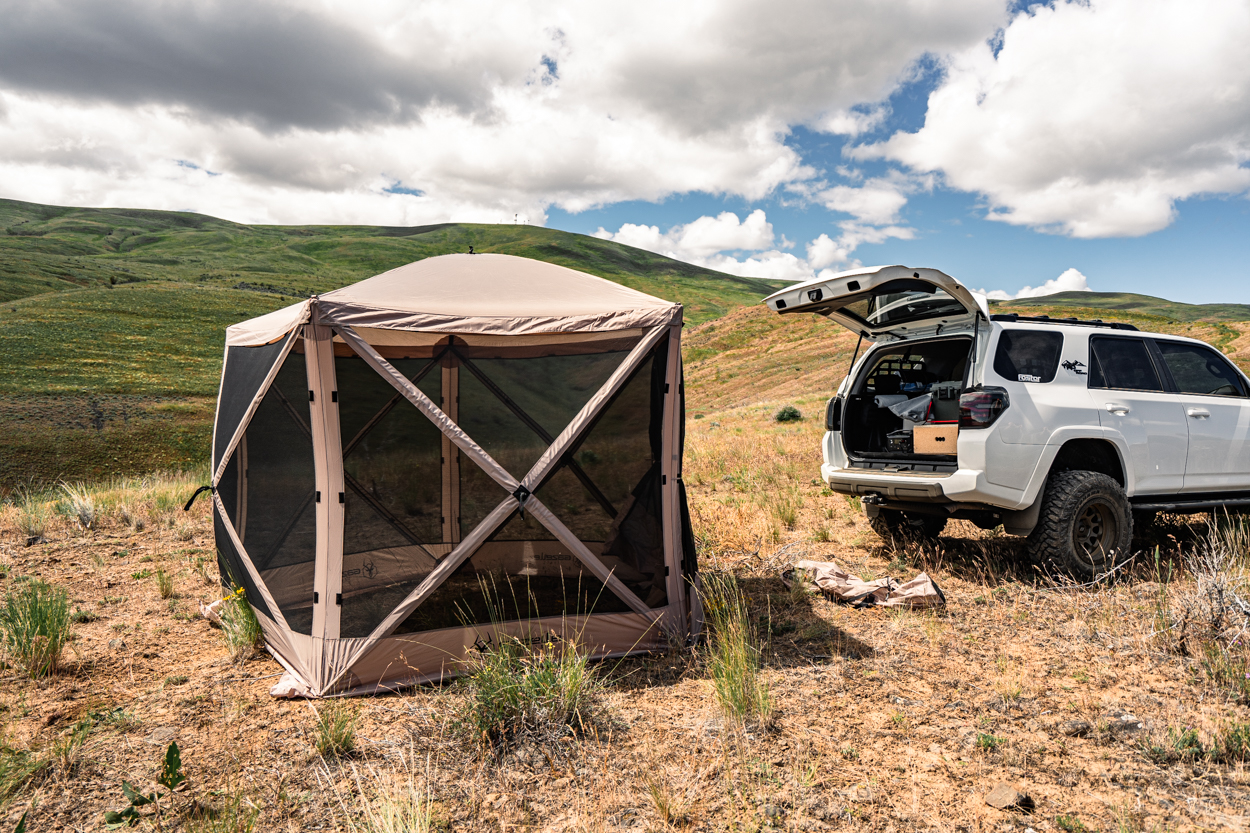 Have you ever found yourself needing shade or shelter from the elements? For those of us who don’t have a 270-degree awning or need coverage away from the rig, there is the Gazelle G5 portable gazebo.

The G5 is a 5-sided gazebo that sets up in less than a minute. It provides 60 sq ft. of shelter in a portable package that weighs only 23.5-pounds. Not enough space for you or your family? There’s also the G6 6-sided portable gazebo that has all of the same features and materials but provides 92 sq. ft. of covered space weighing in at 34-pounds. Both models stand at 7-ft tall at their center, creating the perfect space for hanging out. 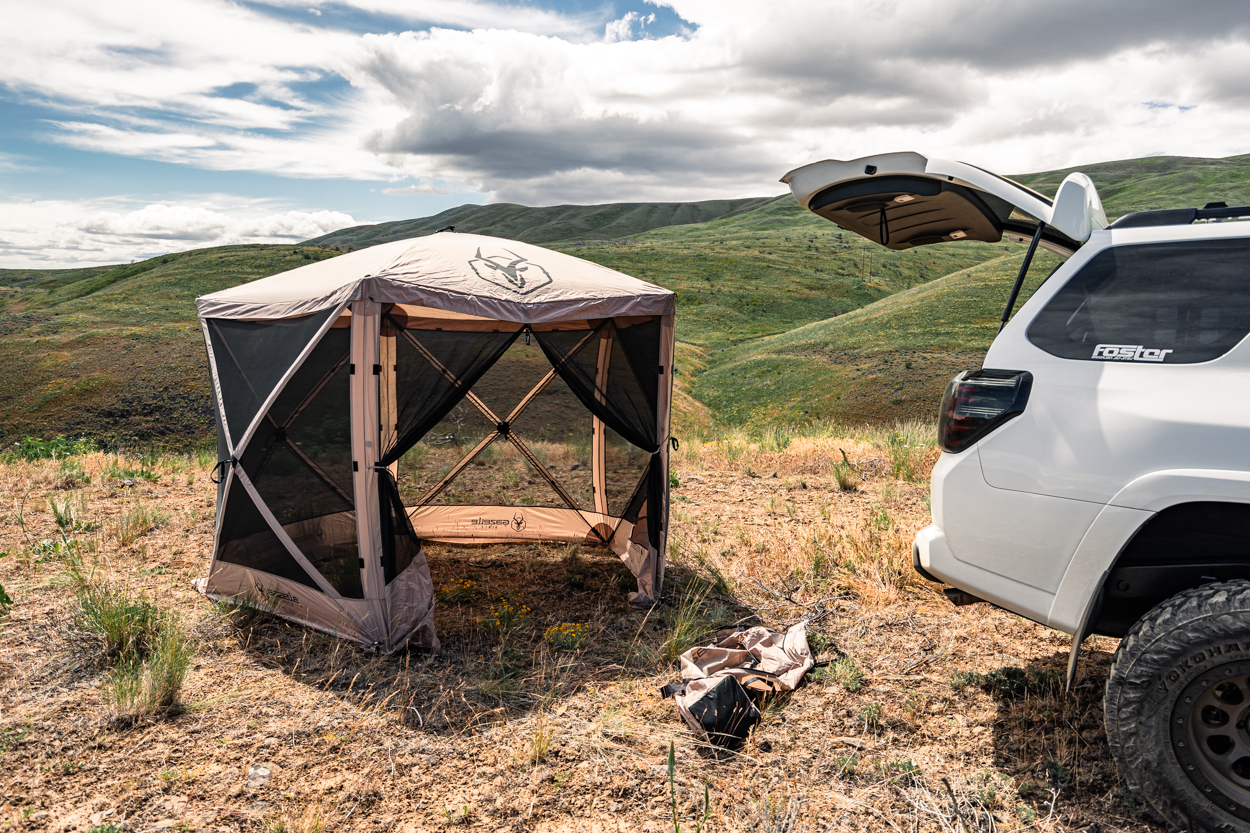 Gazelle offers several products that are geared toward those who enjoy the outdoors but also want a bit of coverage from it. They make tents and portable gazebos, both utilizing a hub-centric system that allows for super quick setup and take down. For sizing, there are two gazebo options that are suitable for either four or eight people. For tents, there are options from three people all the way up to eight people.

All of Gazelle’s products come with a 1-year limited warranty.

How Does It Compare To A Canopy? 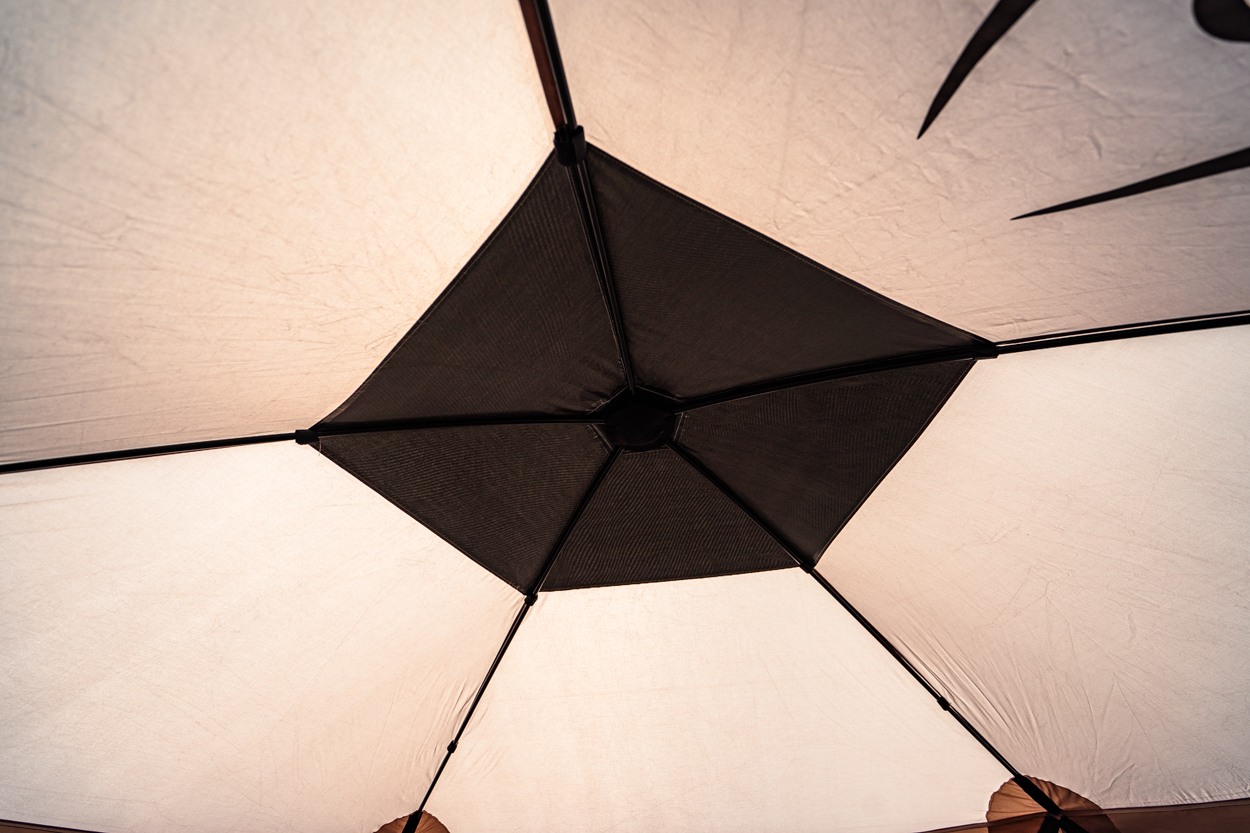 If you’ve ever set up a traditional four-sided canopy, you know it sucks. It usually involves the coordination of four people to simultaneously pull away from each other and maybe even a fifth person in the middle to push up the center post. While this may work in a group setting, that’s not feasible for a family of three with a toddler.

More often than not, I need to set up shelter on my own, so a traditional canopy doesn’t work for me. The Gazelle G5 portable gazebo is lightweight and easy enough for me to load up, set up, and take it down without any additional help. Not only that but the setup takes mere minutes with the takedown being even quicker.

I’ve set up plenty of canopies and now appreciate not having to fumble around with those accordion frames. I especially don’t miss the separate roof canvas that has to be installed every time. The gazelle portable gazebos are one-piece construction with no extra parts to worry about. The only detachable pieces are the screen door structure pole supports. 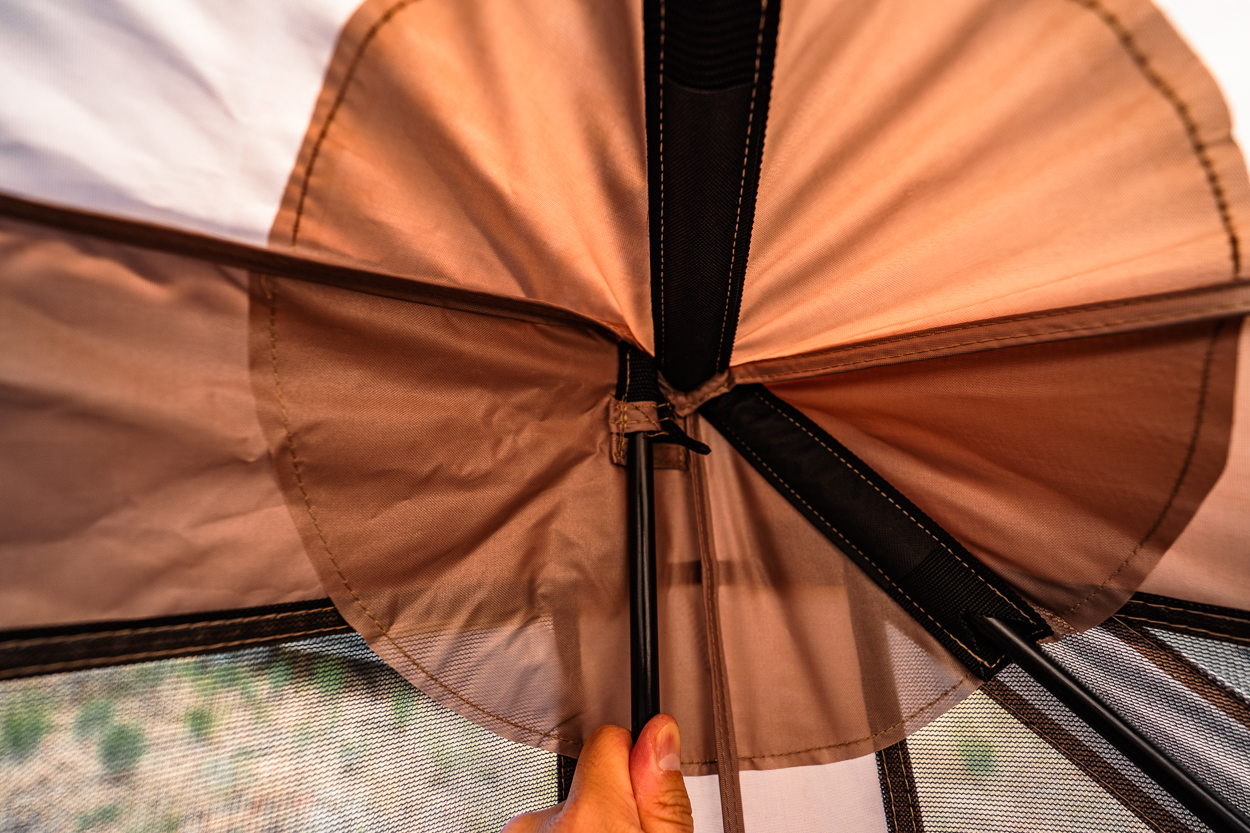 The Gazelle portable gazebos comprise tight-weave mesh sides and zippered screen door with a 210 denier Oxford weave polyester roof that is waterproof and has a UV50+ rating for rain and sun protection. The sides and roof have a waterproof rating of 2000MM while the optional footprint is rated at 3000MM. Apparently, any fabric rated at 1500MM is considered waterproof, so you are well protected from the rain.

The actual build quality and stitching all appear to be top-notch. I’ve noticed that in their most recent revision of the gazebo, they’ve sewn fabric covers over all hub joints to protect them from dirt. That’s a nice little attention to detail that I’m sure will contribute to their longevity.

The tight-weave mesh used for the sides and the zippered-screen door do a great job at keeping the bugs out. It’s actually so tightly woven that there’s almost no cross-breeze present inside the gazebo. I would have actually preferred a little better ventilation, but I can appreciate the protection from even the tiniest of bugs. 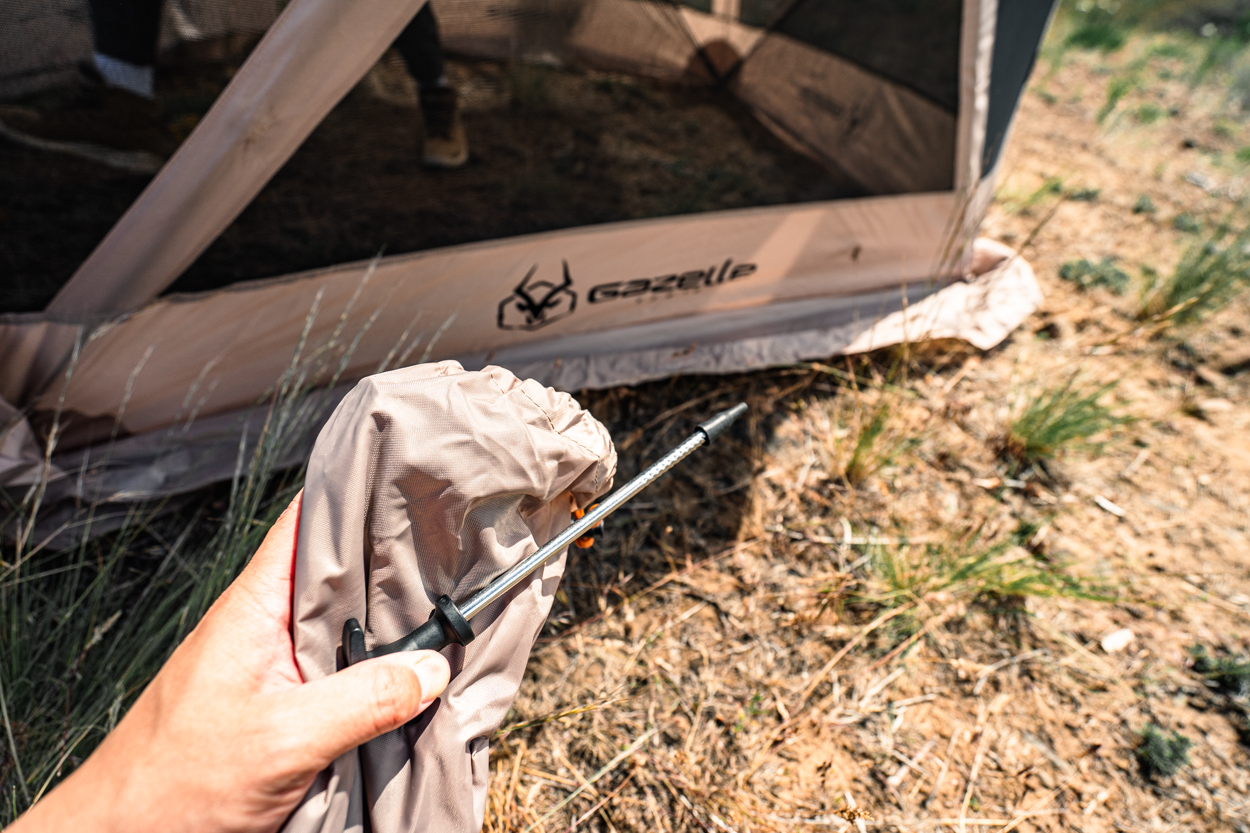 Included also are all-terrain ground stakes and guy lines to secure the gazebo in windy environments.

Gazelle products come with oversized storage bags to make putting them away a breeze. If you’ve ever deflated an air mattress and tried to cram it back into its storage bag, you’ll appreciate this thoughtful feature.

Gazelle’s gazebos are compatible with optional windscreens that quickly attach with velcro. These are great when you need a little extra privacy or extra shade from the afternoon sun that shines through the sides. They are sold in packs of three and you can choose to either cover one side or all sides.

There are also custom-fit footprints for each gazebo model if you want a fully enclosed space or if the ground is wet. 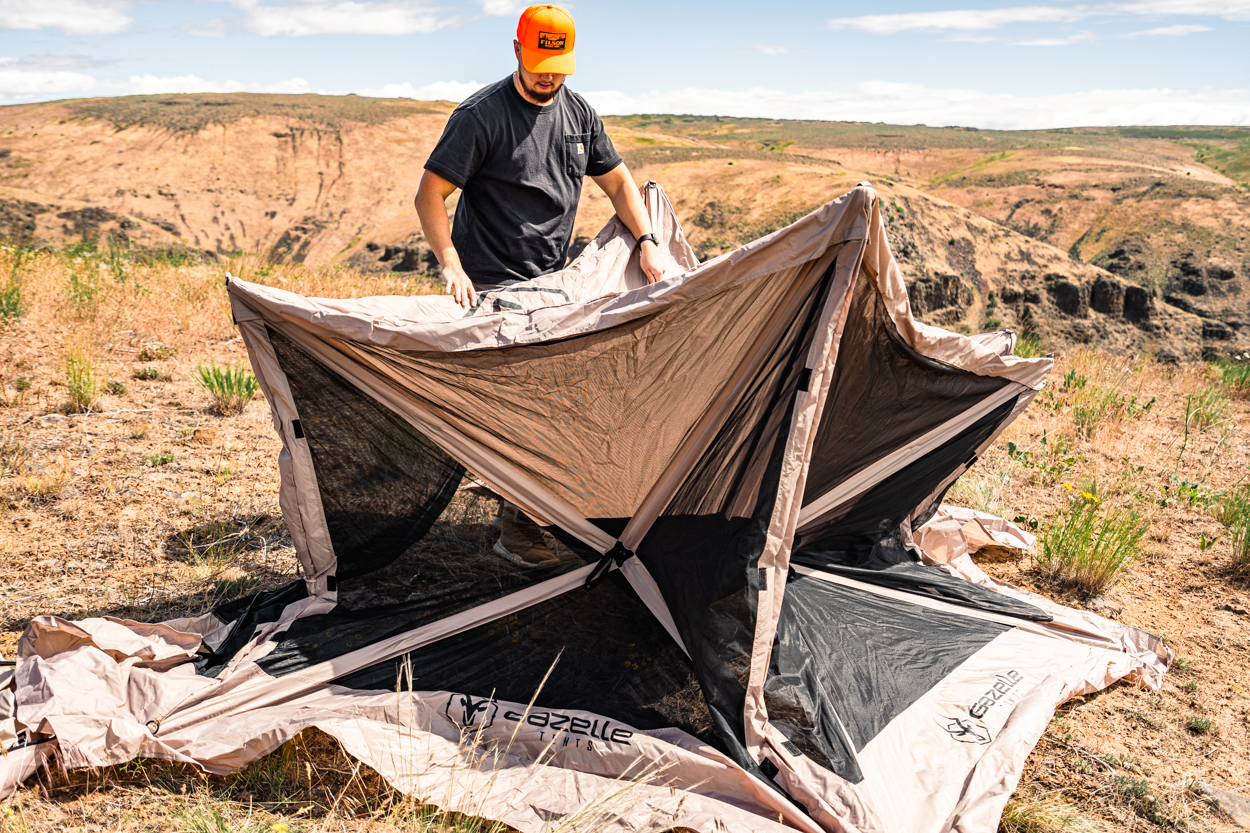 Setting up the Gazelle G5 has a bit of a learning curve, but it doesn’t take long to get the hang of it. 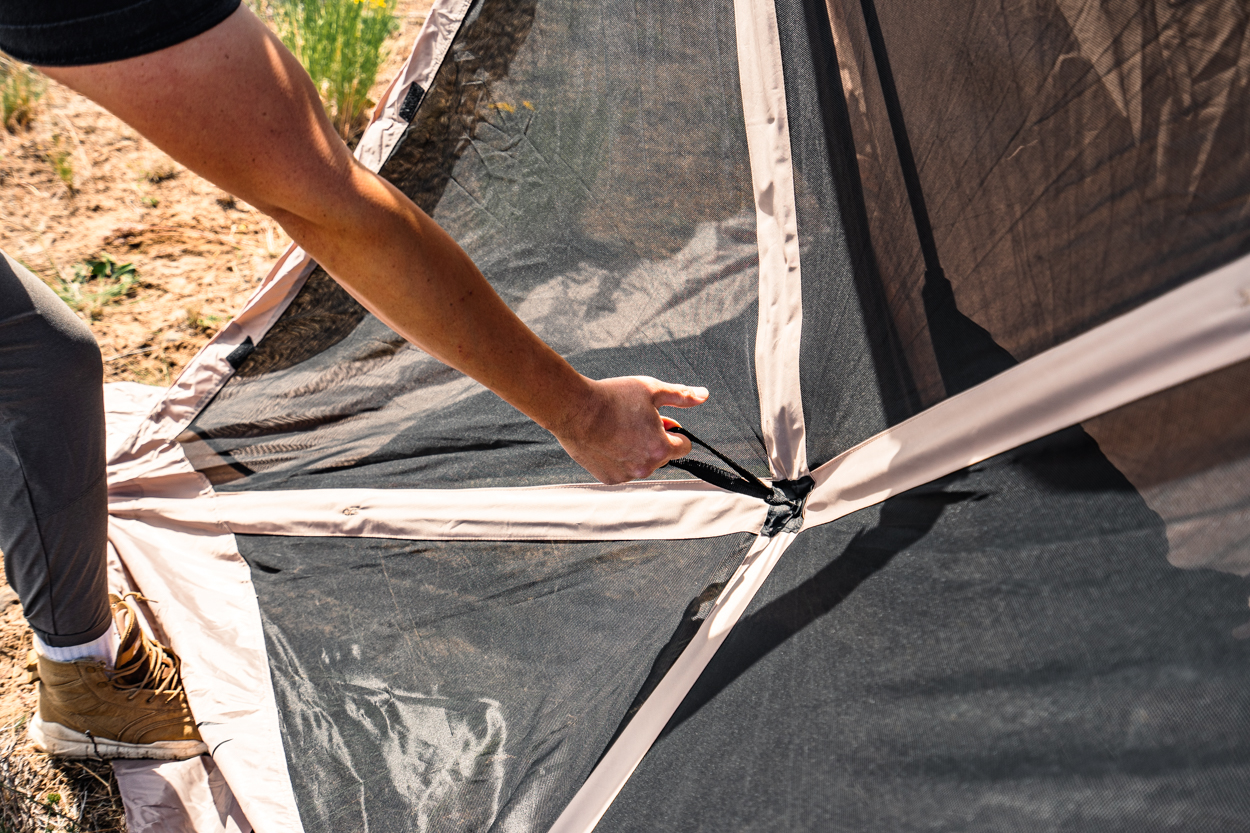 Each side has a pull strap in the center that is used to pop it out. I found that putting your leg in front of the side that you’re pulling out gives just enough leverage to lock out the hubs.

Repeat this on all five sides or six if you have the G6 model. Once all sides have been popped out, you just push up on the center hub from the inside. You can either have someone hold down a side or do it yourself from inside as you push. 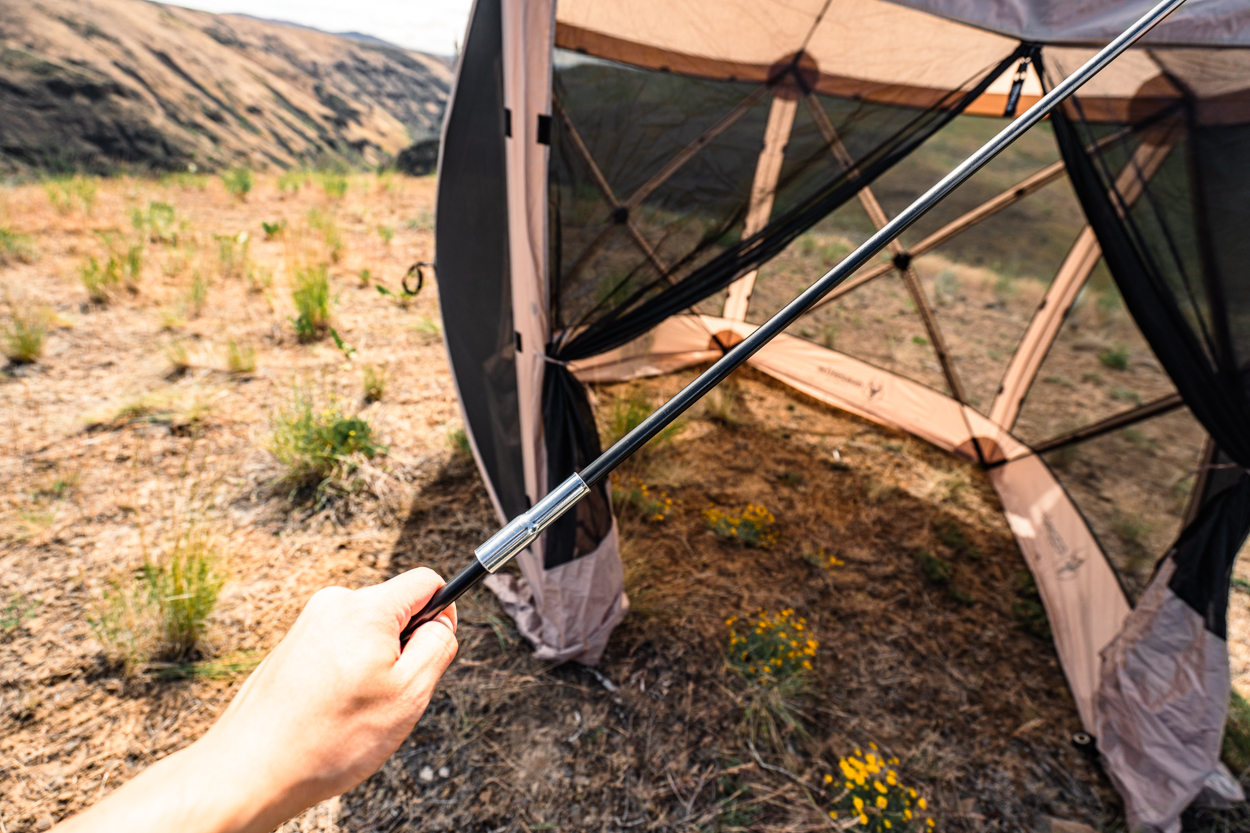 There are two tent-style poles that are used as structural supports for the screen door. Insert the ends into the top and bottom stitched corner pockets on the inside of the door panels. 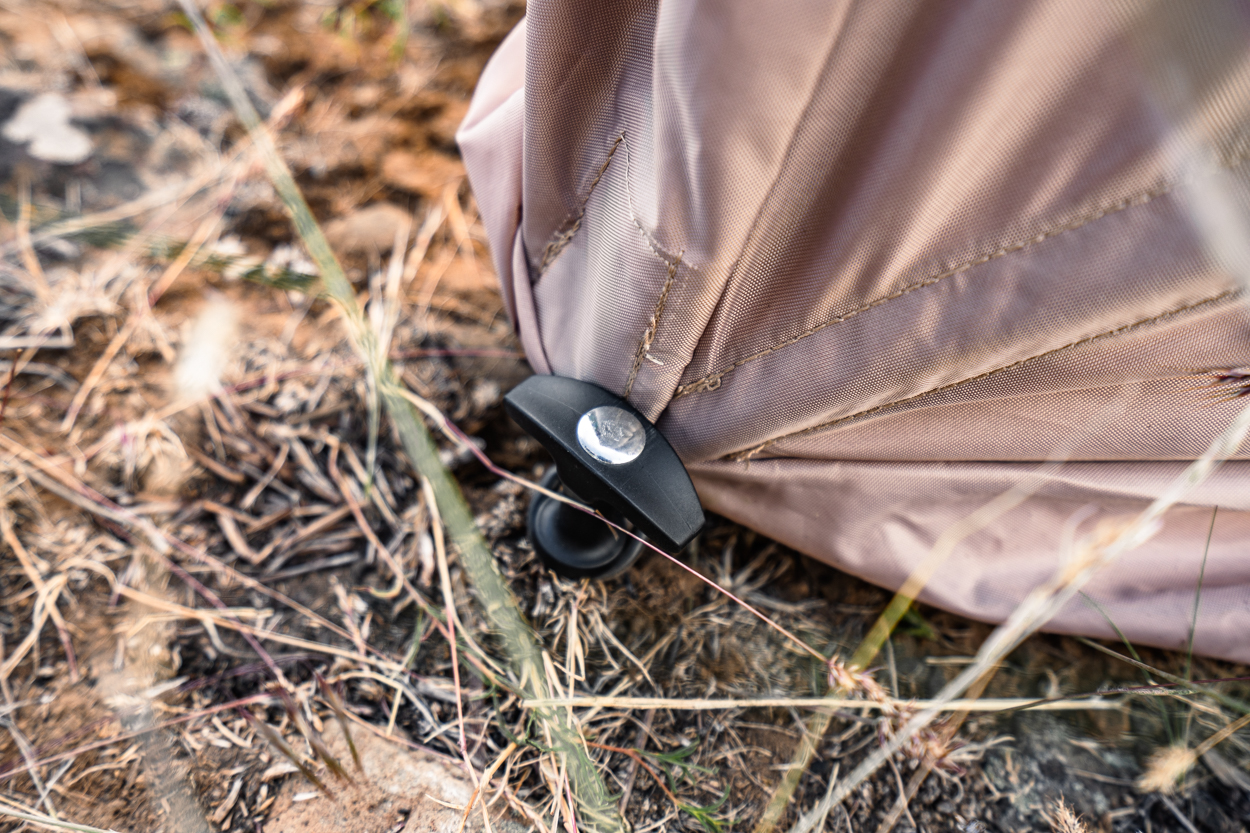 Lastly, you can use the provided ground stakes and guy lines to secure the gazebo if there’s any wind present. The fine mesh sides don’t let a ton of air through, so the gazebo basically acts like a giant umbrella with the right gust of wind. 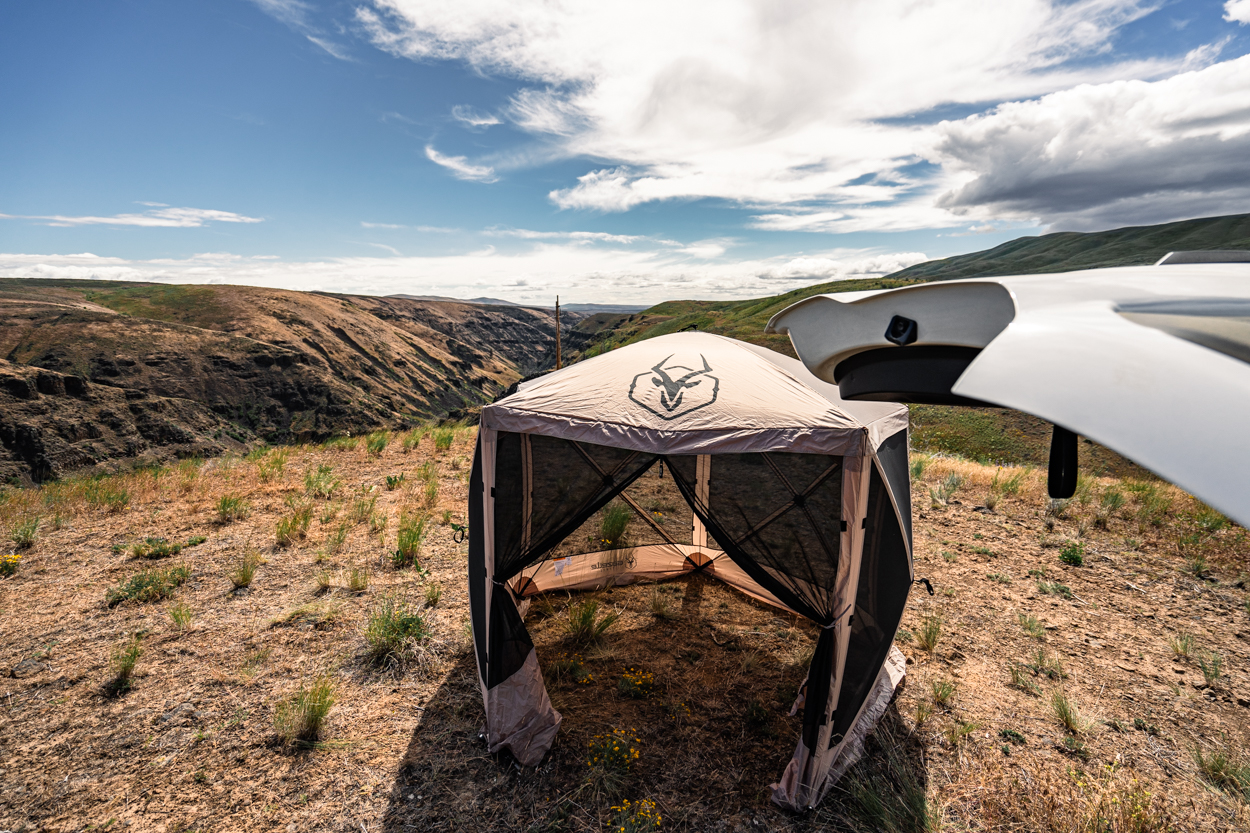 I couldn’t ask for a better portable shelter than the Gazelle G5. In our month of ownership, we’ve already used it plenty. Our house is West facing, so the afternoon sun can get pretty intense. The Gazelle G5 is so simple to use, that we’ll break it out even for short durations, not just full-blown day camp.

It definitely turns heads at the park because one minute, people just see a large storage bag. They will turn away and look back to all of a sudden see a giant shelter. It’s been a real game changer and basically allows us to hang out regardless of the weather.

I’ve really enjoyed using the Gazelle G5 so far and can see why it has so many rave reviews. If you’re in the market for a portable shelter solution, definitely check it out!