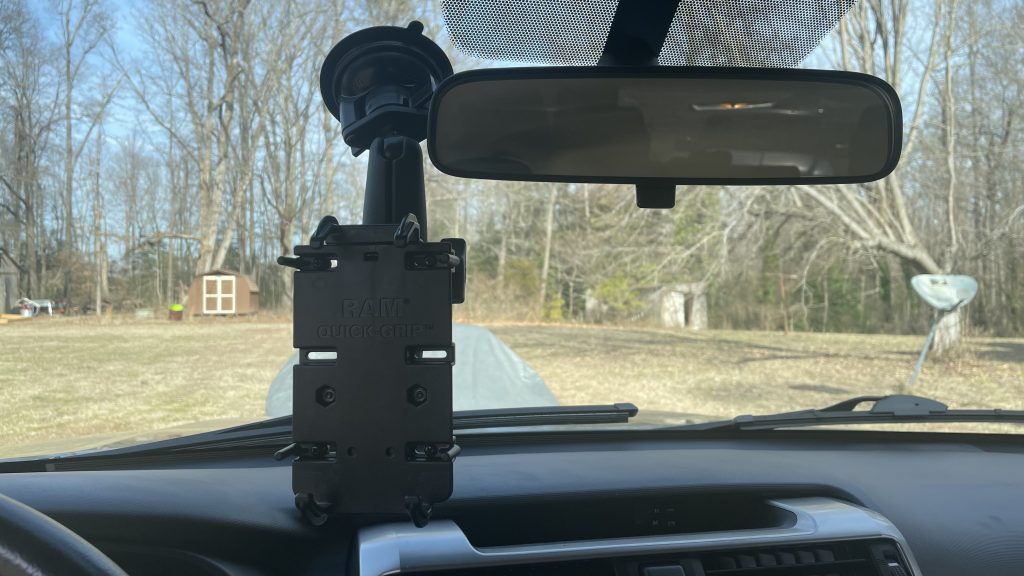 I’ll be honest… phone mounts? I have never been a big fan of them. I’ve seen many friends buy them from random retail stores only to watch them fail miserably. The suction promotes itself like a saltwater fish on a shark, but they fall every 10th bump on the road. Or, they’re made with some cheap plastic that breaks after two months and you’re left paying for another mount… and maybe even a new phone screen.

Me? I’ve mostly been fine with throwing my phone in the cupholder, or in some vehicles, it’ll fit perfectly in my dash (though that’s not recommended if you have a lead foot).

In order for me to buy most things (let alone, a phone mount), the cause must result in a decent amount of daily annoyance that inclines me to try and solve the problem. What can I say, I’m frugal! However, insert a scenario with:

With these scenarios at play, I told myself I just couldn’t do it anymore and I knew I wanted to give the RAM Mount Quick-Grip a chance after some comparative research. 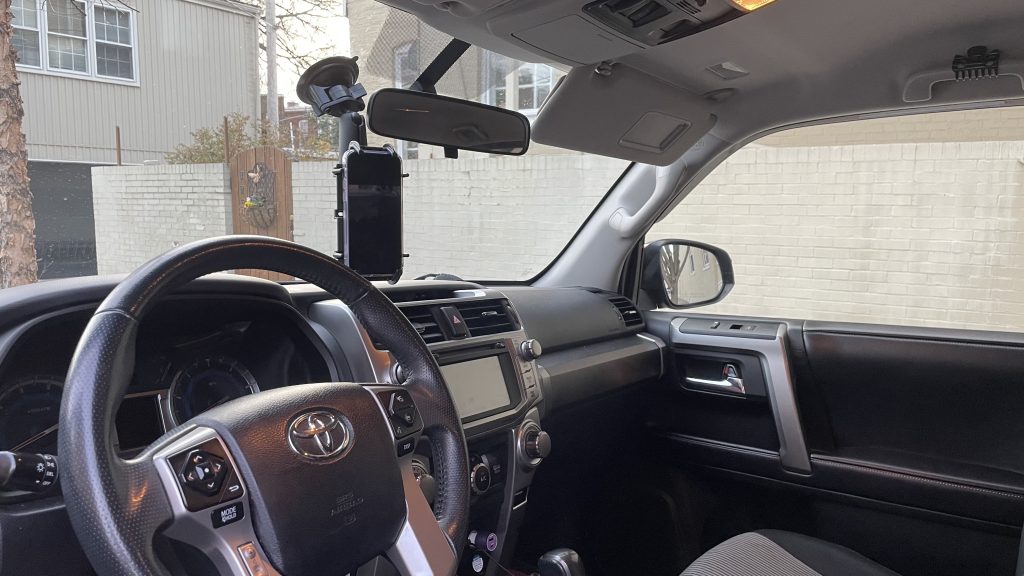 Some overlanders and their electronics can make their dashboard look like a control center for the CIA. Don’t get me wrong, I dig it. At this stage of the game where laptops, iPads, multiple phones, even additional cupholders needed to be of use (while also being kept safe), RAM Mounts seemed to be pretty popular. Plus, I’m only talking about solutions for vehicles here; RAM makes many products for use with ATVs, aviation, heavy equipment on construction sites, marine, agriculture, etc.

Some boxes I was looking to get checked include:

While I don’t get off-road as much as I’d like to, I knew that the highway driving I do wasn’t the only test I wanted the mount to succeed in. I wanted it to endure some trail driving. 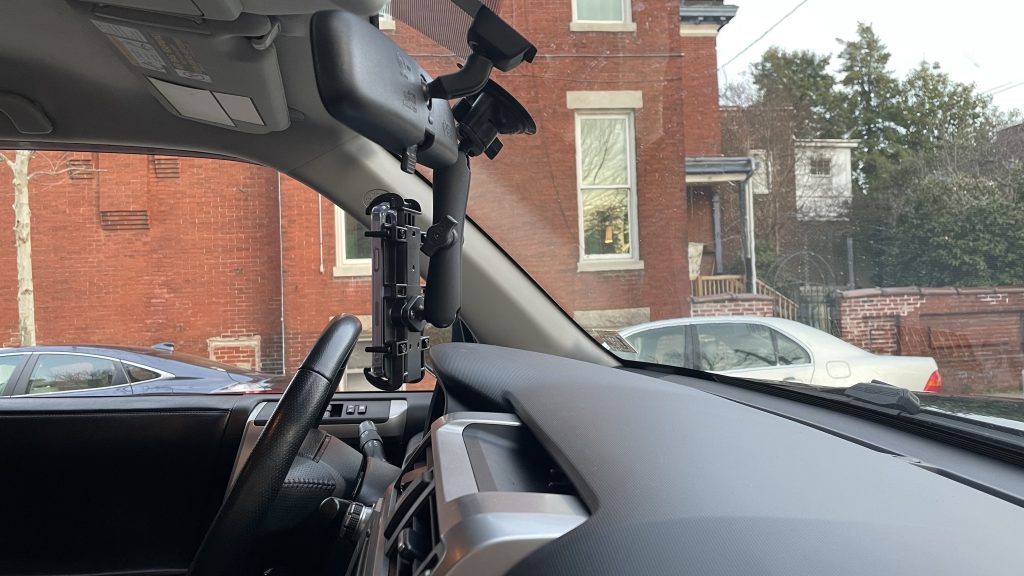 Though many of Ram’s products checked a lot of my boxes, their X-Grip was one option I looked into.

Its quick access seemed limited due to the web/tether (recommended for rugged environments). This would hinder me from quickly grabbing the phone when needed. Without the web, however, the mount only secures your phone from the sides via the spring-loaded arms. I was concerned that these springs could give out over time since the phone wouldn’t be supported from the top or bottom.

Releasing my phone from the mount with one hand was also limited since you’re supposed to pinch the two arms to release and grab it with your other hand. I wanted to take a look at other options.

RAM also has mounts that can charge your device (compatible with Apple MagSafe) via adhesive magnets. However, I’d still need a proper phone case that’s MagSafe. It also wouldn’t hold up well during rough driving as well compared to the twist-and-lock suction cup.

As for the larger charging mount, I wanted to keep in mind that there is an added electronic component. At some point, there may be a situation where the MagSafe charger itself isn’t working entirely. Or, it works fine but there’s a connectivity issue while it’s mounted. Maybe I’m thinking too much about it but I wanted to be cognizant of variables.

The Quick-Grip with the tight, twist-lock suction cup kept things at eye level, This is unlike the cupholder base mount or the tough-wedge-based mount (the one that extends out from the crack of hell in-between the seat and center console). It relies on solid arms on the bottom (an open space between them that allows for a charger to still be plugged in), screwed in smaller arms on the sides that are adjustable in width, and a spring-loaded top that’ll be expanded to secure the phone.

One-handed operation is easy, keeping the phone accessible through all kinds of travel. 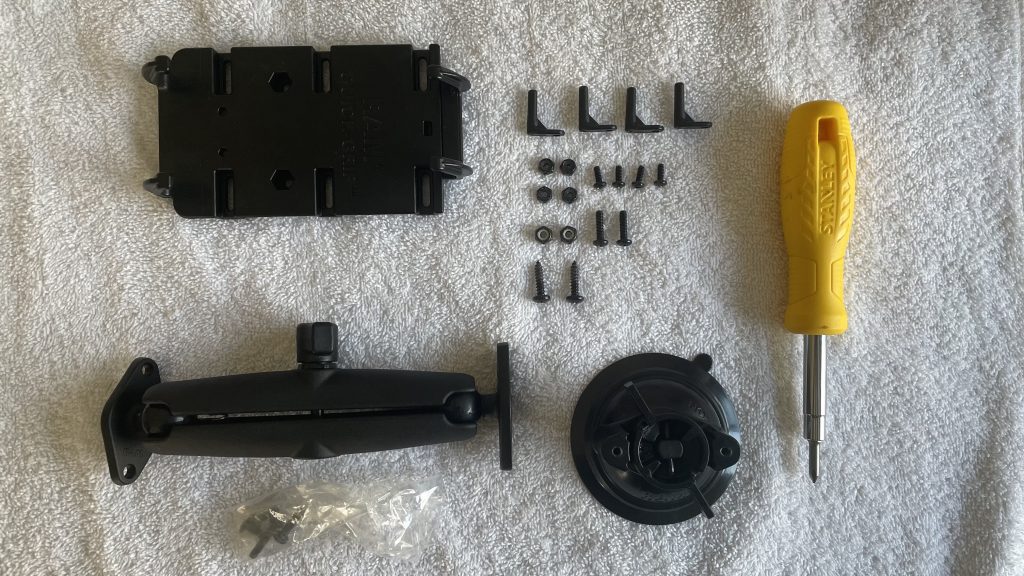 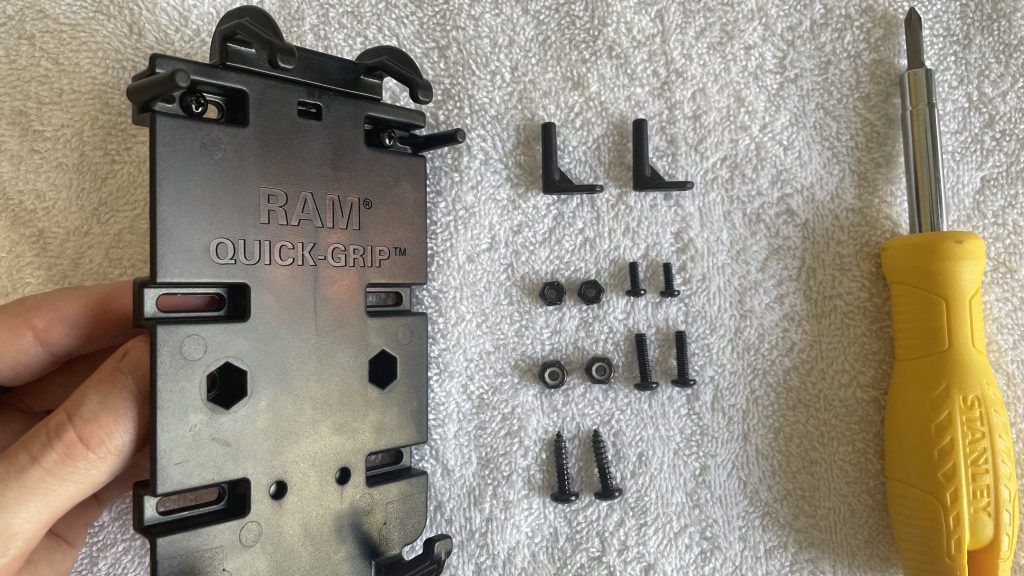 Beginning with the side arms, find a width that fits your phone or that you’re comfortable with.  From the front, insert the smaller screw through the hole of the L-Shaped arm. Tighten with the nut on the back. 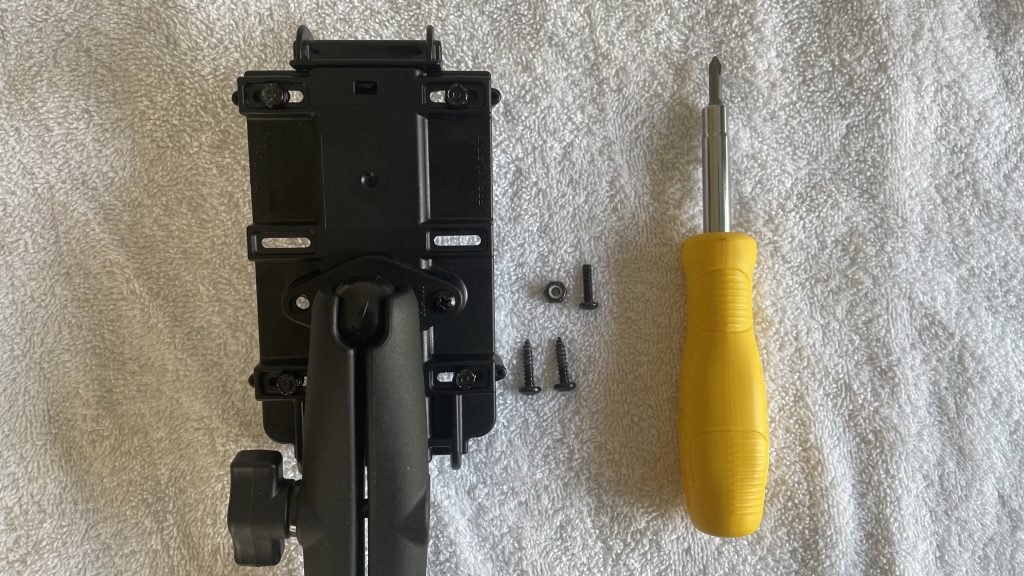 Once the arms are in place, tighten the larger flat-tip screws (you may be provided length options in the box for this step). It’s all preference and the rest could be saved for future instances from the back after placing nuts in the front two (2) hexagon-shaped holes.

Either side of the arm can be screwed into the back of the case. The arm can easily be rotated when untightened, allowing the user to switch which hand tightens the arm depending on mount placement. 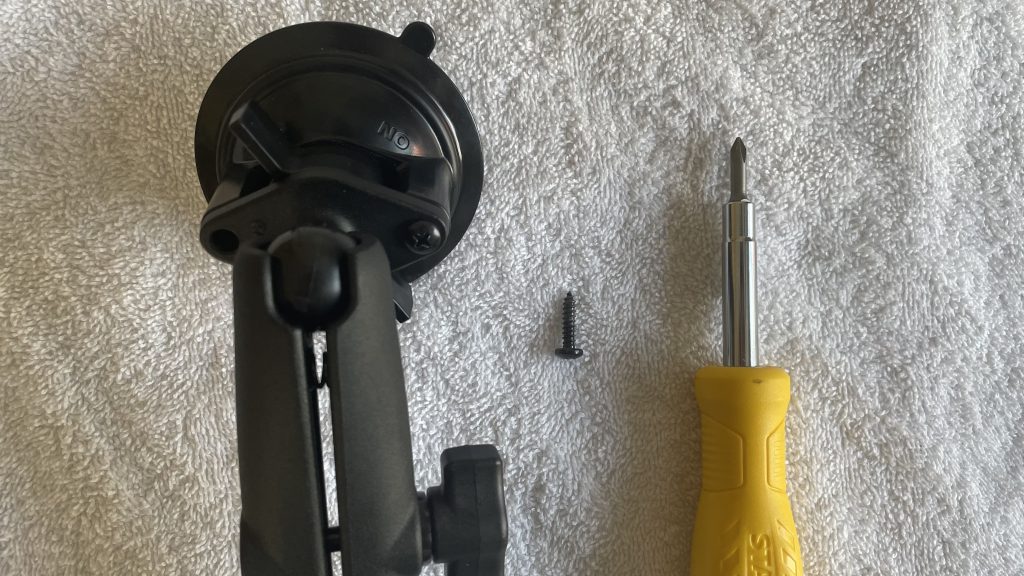 Lastly, hand-tighten the self-tapping screws to attach the arm to the suction mount. Do not over-tighten, as directed by the instructions. 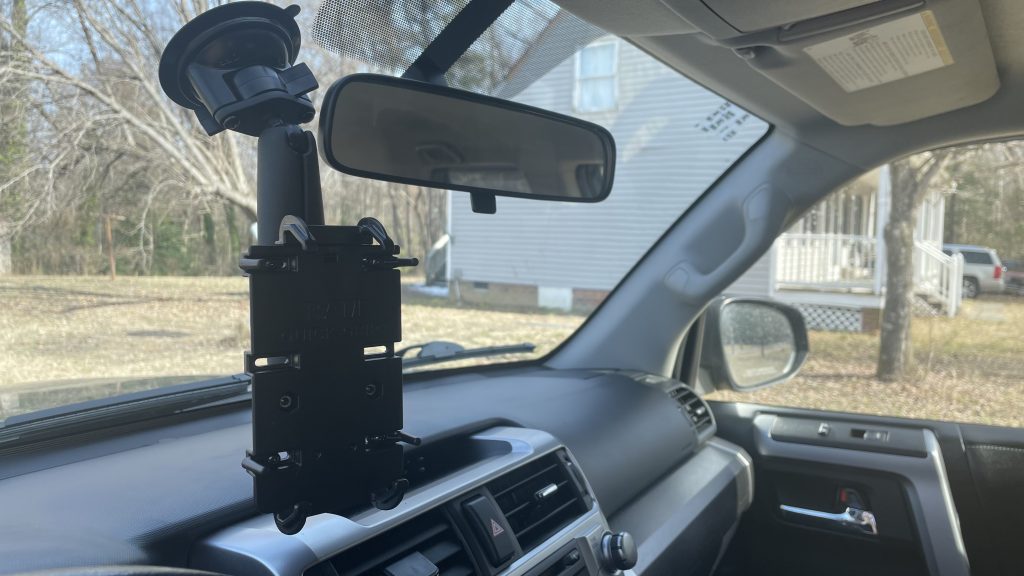 With the assembly easily completed, place your RAM Mount in its desired location. 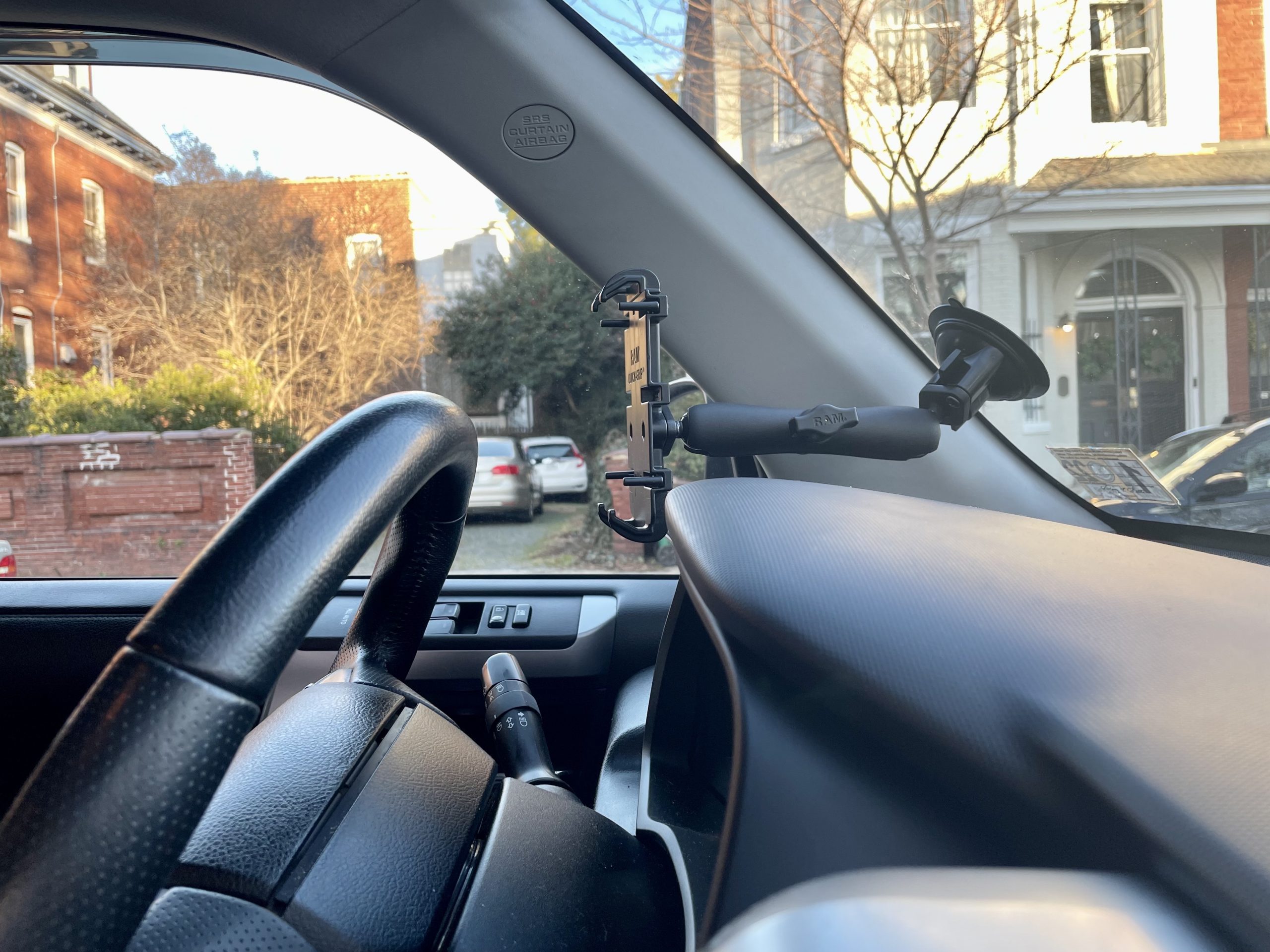 One last thing to consider is the angle of the arm when mounted.

The more horizontal the mount extends from the suction, the more give there will be up and down when springing the phone in and out. This is due to the fact that the case with the mount contains two different joints and not being one solid piece.

The more vertical position the mount is (like in my set-up), the less give there is and it’s almost non-existent since we’re pushing the joints straight into each other. Though it may seem insignificant, over time the force will add up and increase the inevitable wear-and-tear.

The RAM Mount Quick-Grip has been a solid buy. Considering the strength of materials used and design of the product, I’d say it’s worth the price already after a month in. One-handed operation is easy and your phone doesn’t slide at all. This holds true even without the side arms on both the highway as well as the trails.

Hello! I'm Kyle and I reside in Virginia. Among many hobbies, I enjoy a good campsite; allowing myself to get out of the city whenever possible. Here's to adventuring, with a good 4Runner.