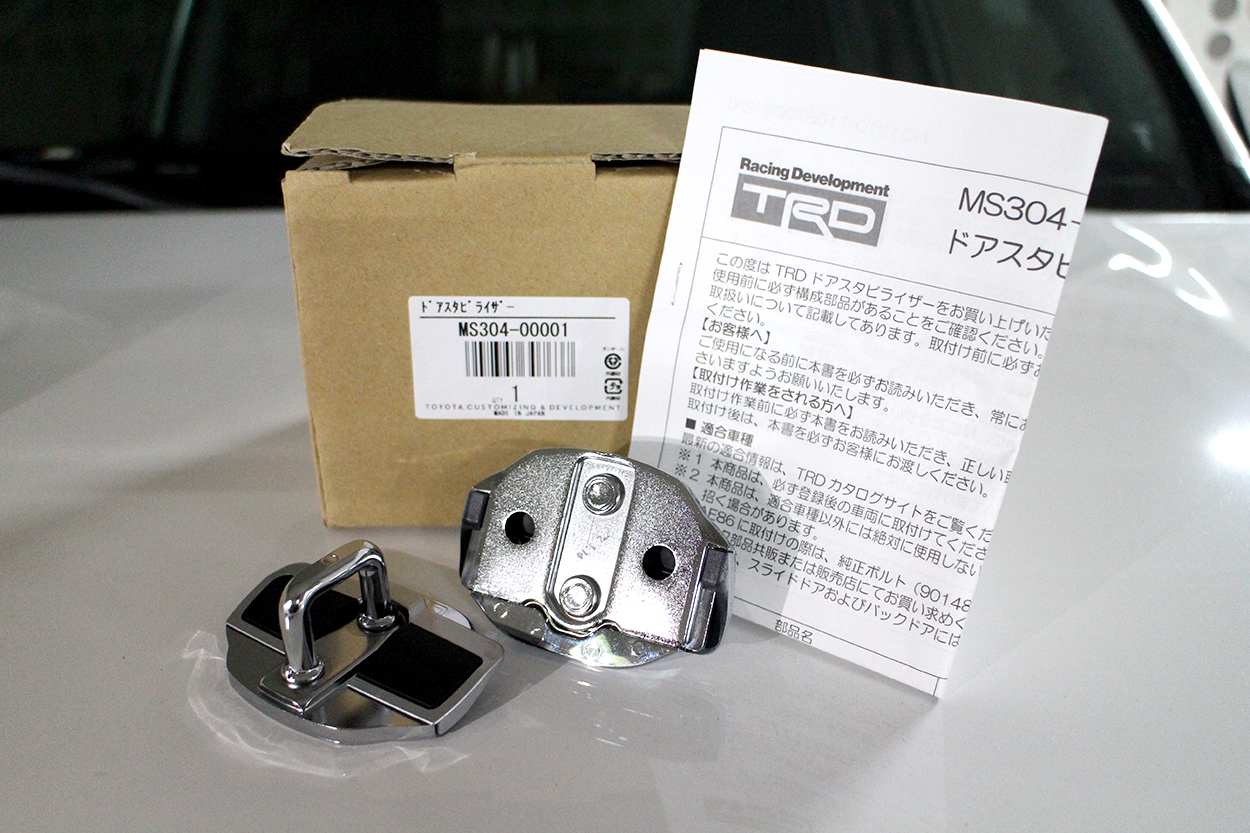 TRD Door Stabilizer For The 5th Gen 4Runner – What It Is, Installation, and Review

Originally developed by Aisin Aftermarket, door stabilizers are parts that are engineered to fill the gap between a door and a body. The components of door stabilizers are stainless-steel door strikers with a spring-loaded sliding mechanism and nylon-resin cushions on the door that meet it. The purpose of a door stabilizer is to reduce the lateral sway of the vehicle by increasing body rigidity, thereby increasing steering response during daily city and highway driving.

The TRD Door Stabilizers are universal parts that fit 37 different Japanese Toyota models (11 US models as of January 2013); including the FJ Cruiser and Hilux (Asia-region Tacoma). According to this fitment guide, they are also compatible with nine Suzuki models and one from both Mazda and Subaru (as of December 4th, 2019). 4Runners, however, is not mentioned on these lists but it should still be compatible.

Neutral or negative reviewers were unsatisfied because of the requirement for additional tools (most people do not own Torx bits nor torque wrenches), the claimed handling improvements were not felt, and the high price tag. With this mod being so popular, there are slightly cheaper non-TRD and non-Aisin counterparts in the market as well.

Note for Japan listing: If you have a friend in Japan, great news – U.S. Dollar to Yen conversion rates are good now (as of May 2022) and you could potentially save some money. Some retailers won’t ship overseas and you will need someone in Japan to send it to the States. Having a friend ship overseas also means that they can use cheaper shipping options compared to a business that typically uses faster, albeit more expensive shipping. 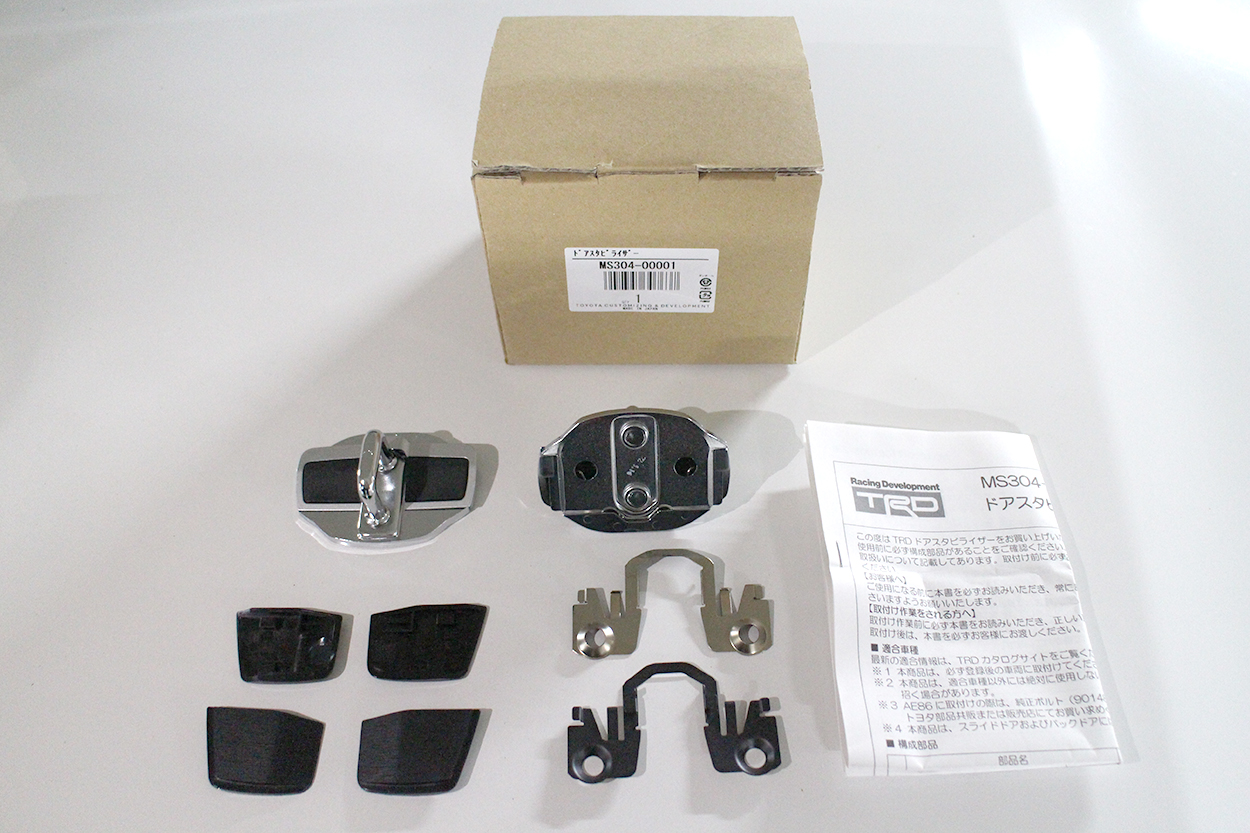 This kit covers a pair of doors, therefore for 4Runners, you will need two kits to cover both front and rear doors. The instructions state that this product cannot be used on the rear hatch door as it does not have any holes to bolt on the mounting plate.

Optional (in case you strip or want to replace rusted bolts): 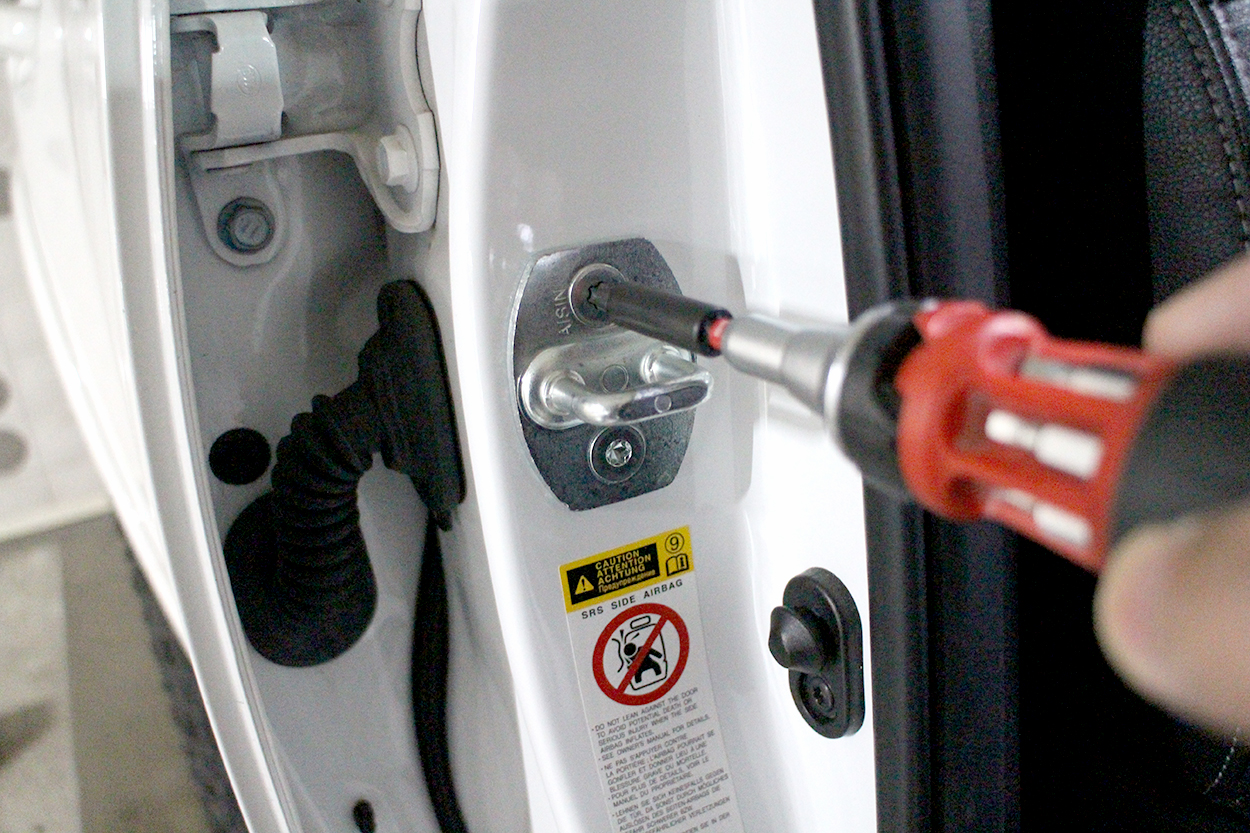 The following steps are for the passenger’s side. Use a driver with a T40 bit to remove two bolts securing the door striker on the body. You will be reusing those bolts so do not strip or lose them. 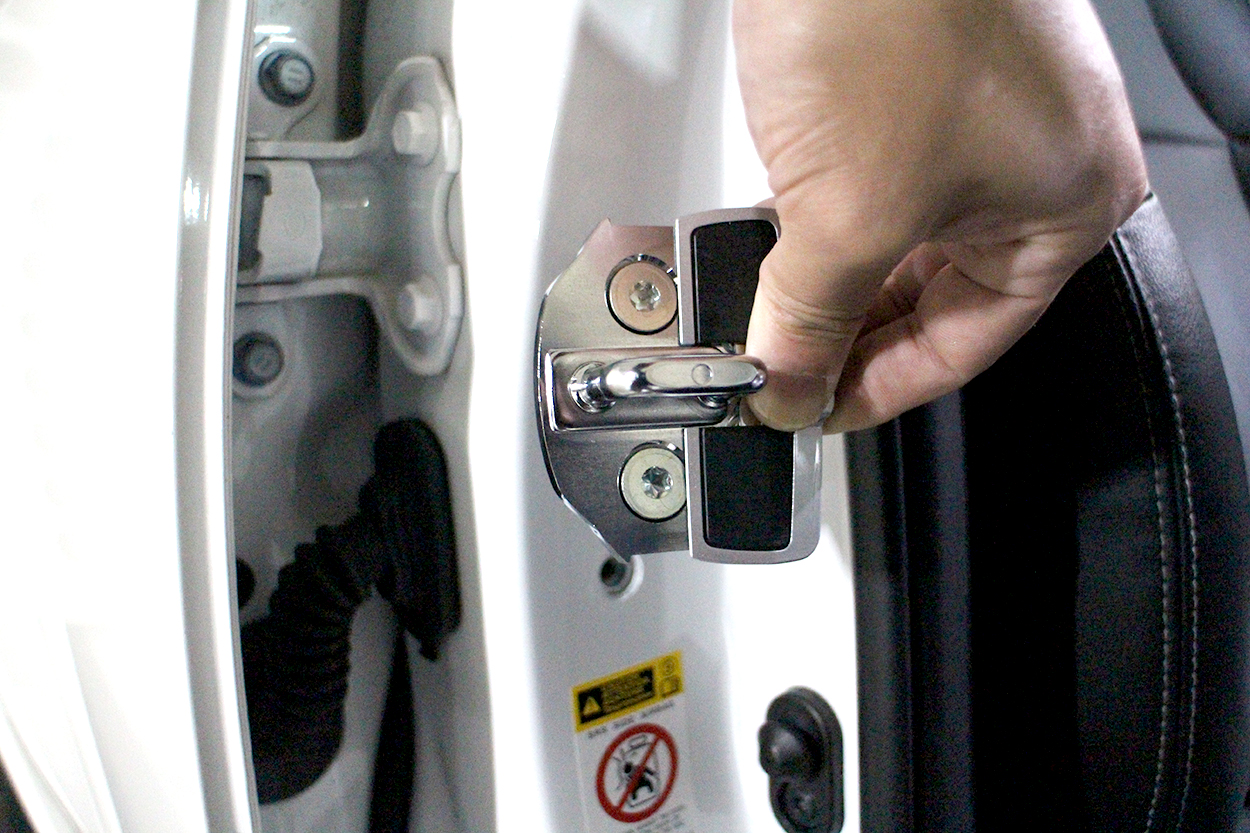 On the new door striker, slide the cover towards the TRD logo to reveal two holes where the bolts go in. Position the TRD door striker on the body location so that the sliding mechanism slide towards the cabin (TRD logo inside, not outside).

While paying caution not to slide back the plate, gradually and evenly bolt on the TRD door striker to 23 N m (17 ft/lbs). 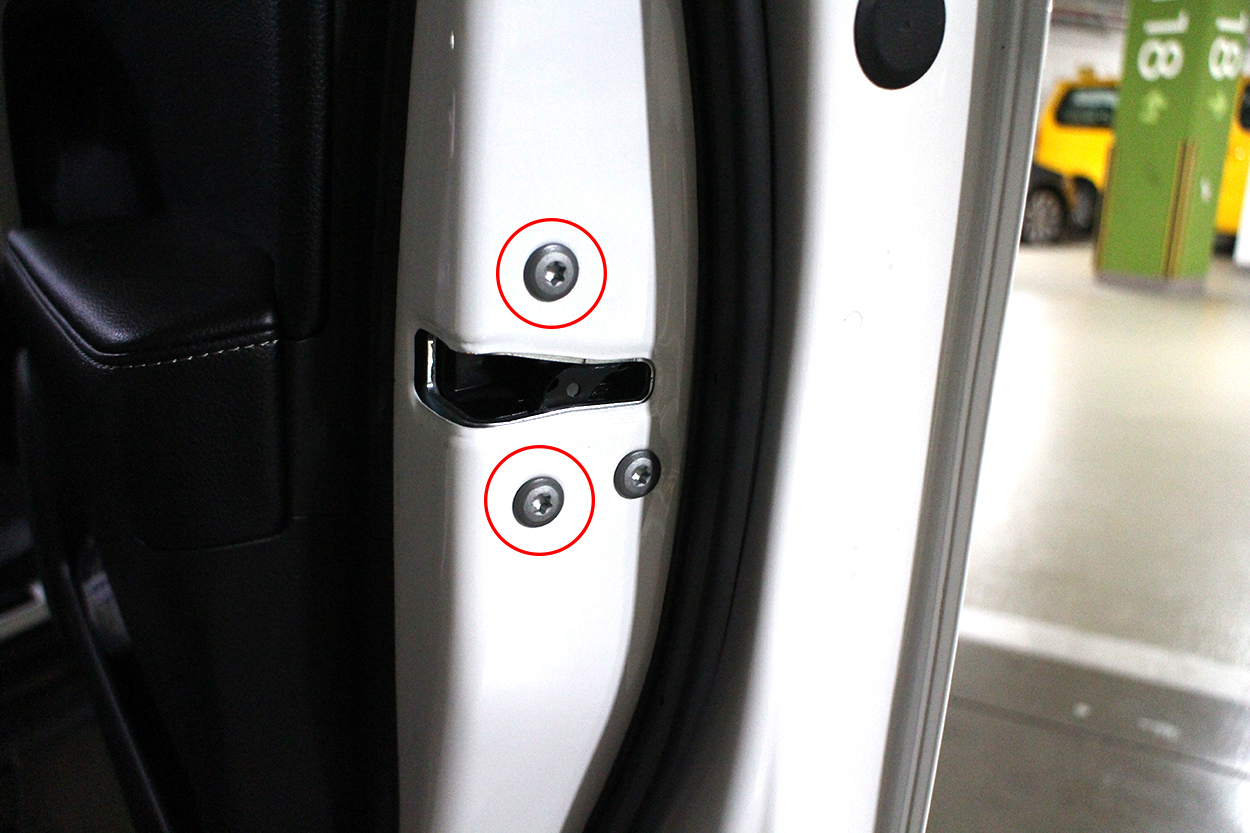 On the door, there are three T30 Torx bolts. Only remove the vertical pair (marked with red circles above) and not the third bolt. Again, you will be reusing those two bolts so do not lose or strip them. 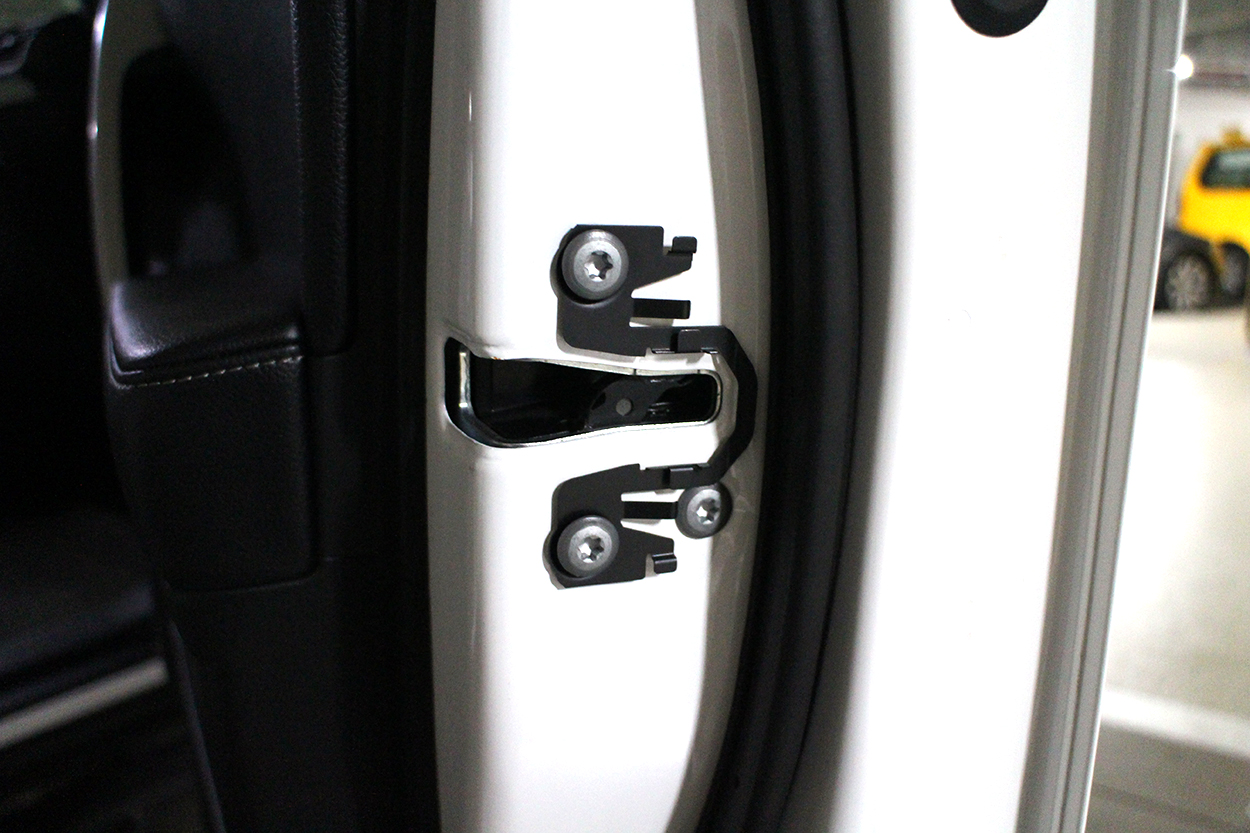 With the black painted surface facing towards you, position the “U” shaped plate base perpendicularly on the door so that the bottom of the “U” is oriented outwards. Make sure this piece does not cover or interfere with the slit for the striker on the door. The torque for the door stabilizer is set less than the door striker, at 5 N m (3.69 ft/lbs). Gently screw in the T30 bolts, realigning the plate base as needed. 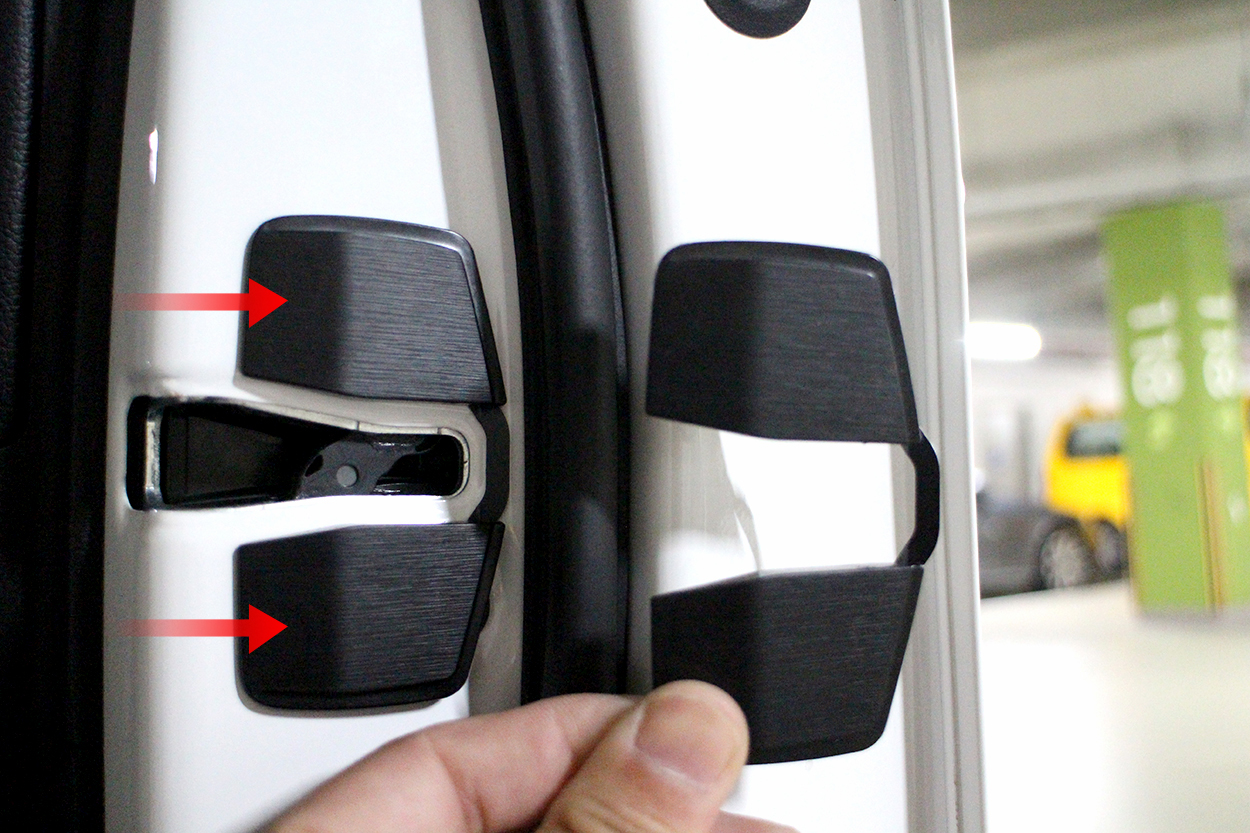 To avoid confusion about which plate goes where and in which direction to slide the plate, partially pre-assemble a set to use as a guide. Comparing with the pre-assembled set, slide the top and bottom plates onto the plate base on the door. The plates slide outward, in the direction marked with red arrows (above). 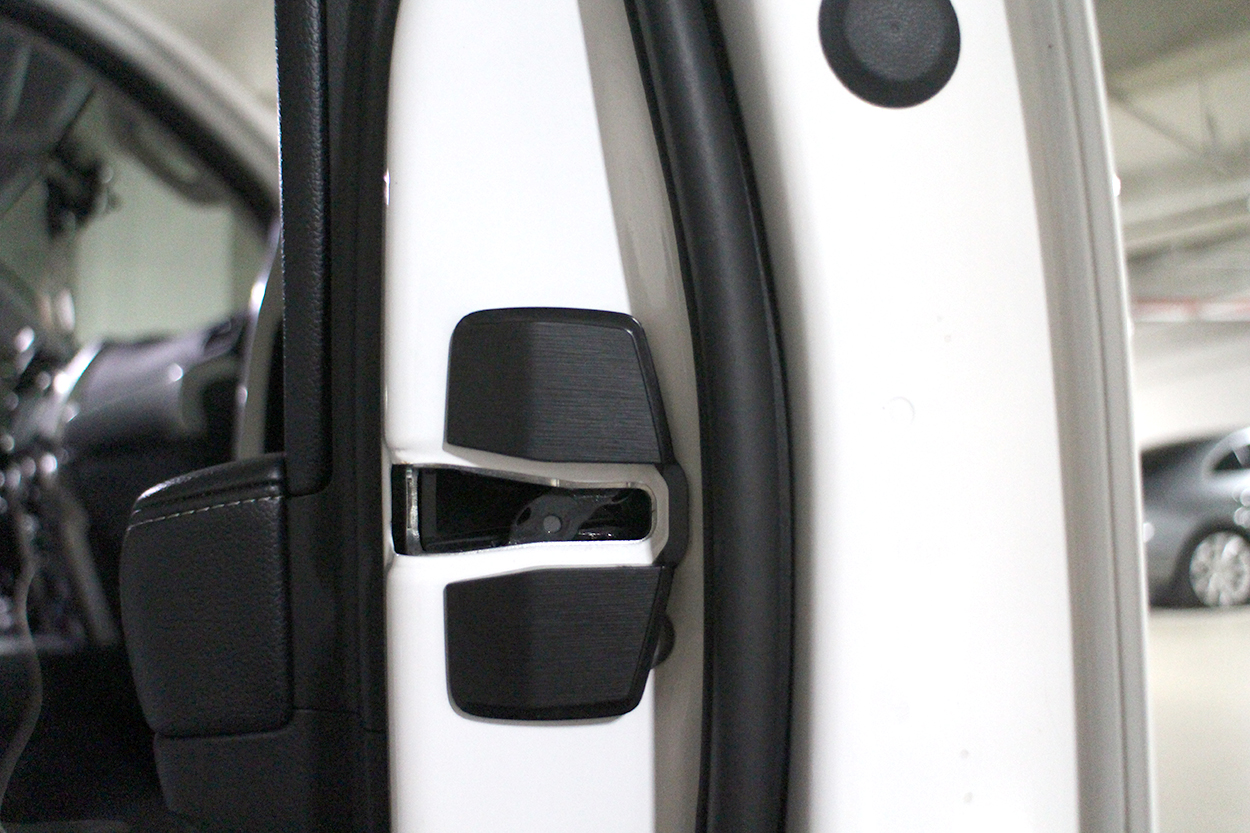 Make sure the outer edges of the top and bottom plates align flush with the outer edge of the plate base (plates are not all the way on the base plate in the image above). 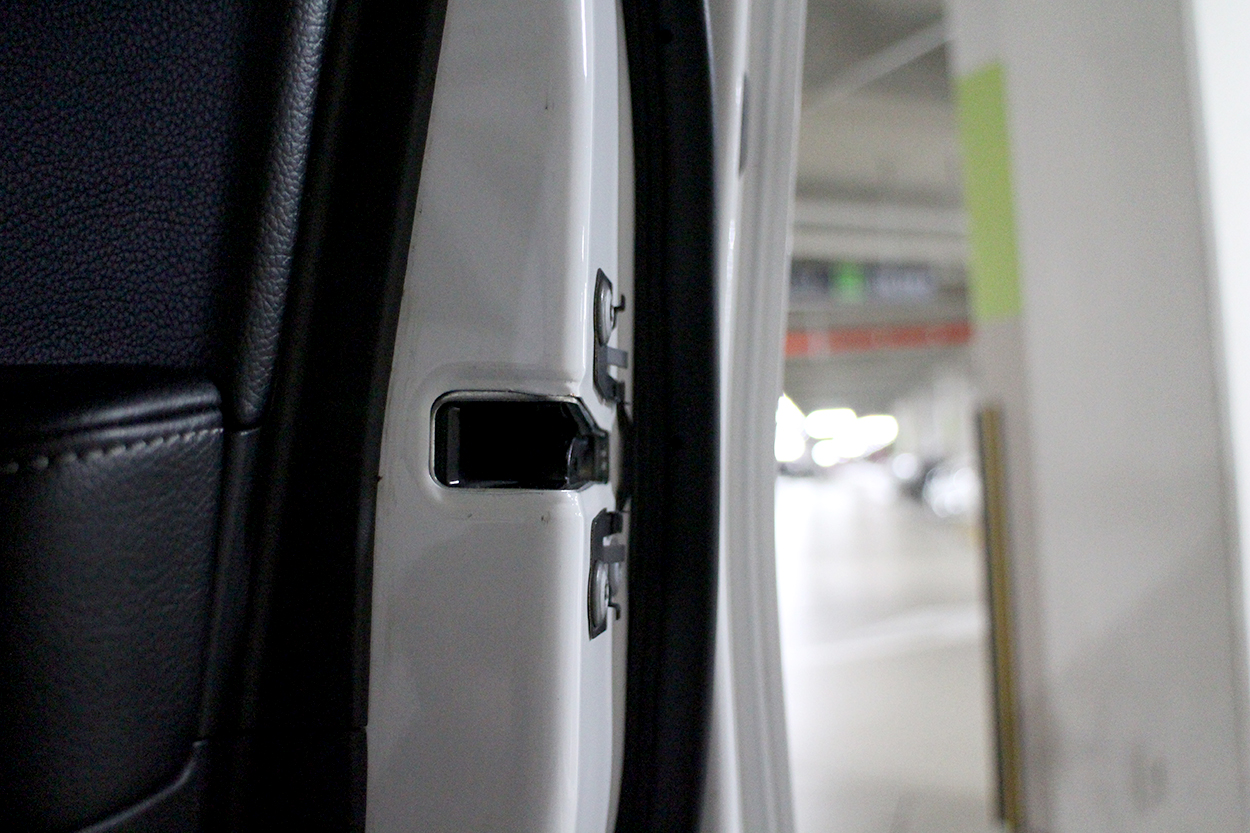 Also, make sure that there is no space between the base plate and the door. After initial installation, close the door gently to check for any interference with closure. It may now take slightly more force to shut the door, however, mine did not. Proceed to install on the remaining doors, repeating steps 1 through 5, reversing the door stabilizer orientation on the driver-side doors. Installation was easy and only took about 5 minutes per door.

I drove around the city, turning at intersections, and went over speed bumps in the parking lot to see the effect of the TRD Door Stabilizers. I didn’t go on a highway because I don’t make sudden lane changes driving at high speed.

Does it work on a 4Runner? 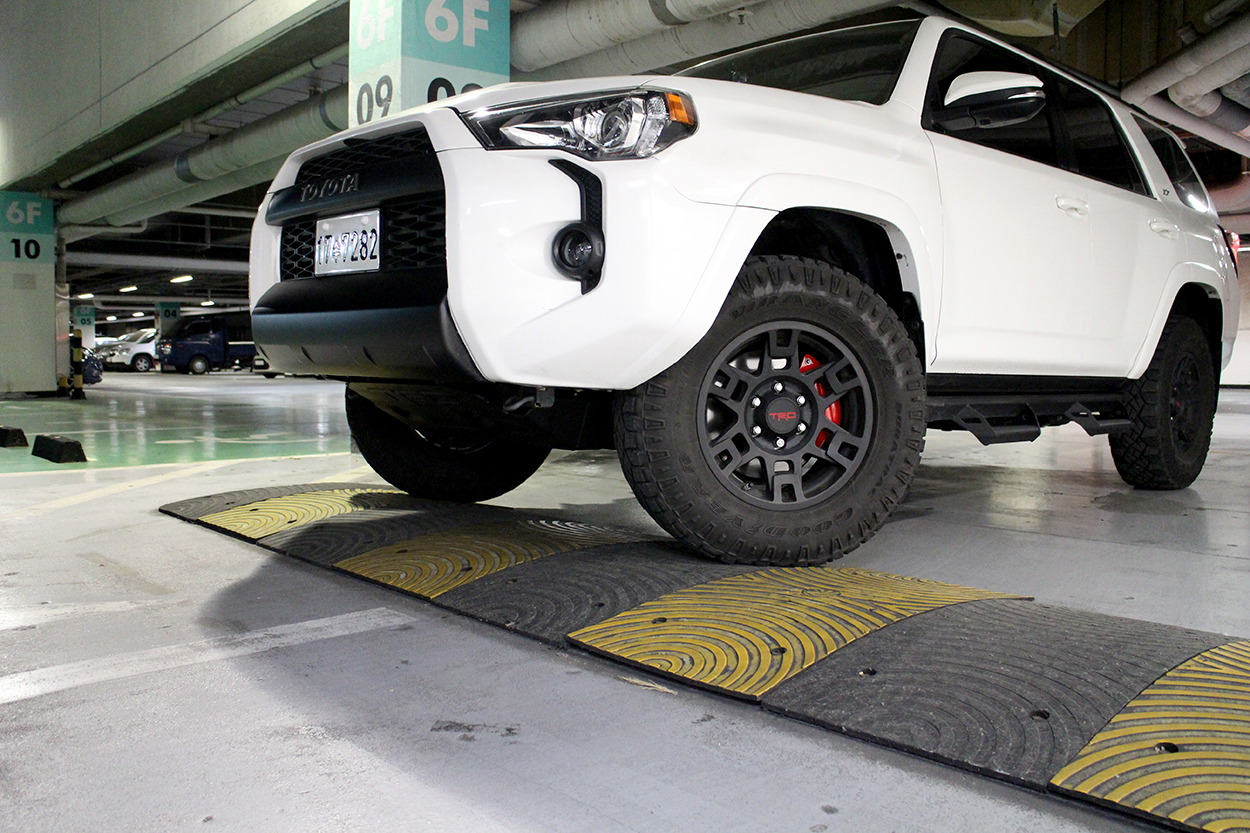 Is the lateral sway reduced? Somewhat. Being an off-road SUV, the body of 4Runners are already quite rigid compared to other compact cars and sedans. Furthermore, having a separate body and frame, most of the claimed flexure would probably happen on the ladder frame, rather than on the body (rather than with the unibody of most other cars). Therefore, it is unlikely that door stabilizers would have much effect on steering response for the 4Runners. Still, I felt a slightly better response when turning at an intersection.

Are road shocks from uneven surfaces reduced? Yes. 4Runners are already well equipped with better suspension than most vehicles. However, the body still sways quite a bit going over large speed bumps at an angle or driving on bumpy roads. By increasing the rigidity of the body with the door stabilizers, shocks from speed bumps dissipated much quicker. I tried going over speed bumps at a 45-degree angle and straight on, and on both trials, there was less body wobble with the door stabilizer compared to before installation.

Some positive reviewers also mentioned that the sound of their door closing became deeper and muffled after the door stabilizer installation. This could be true because the point of contact at the door striker is increased, thereby reducing the vibration of the sound through the door. However, on a fully deadened door, no effect was felt. 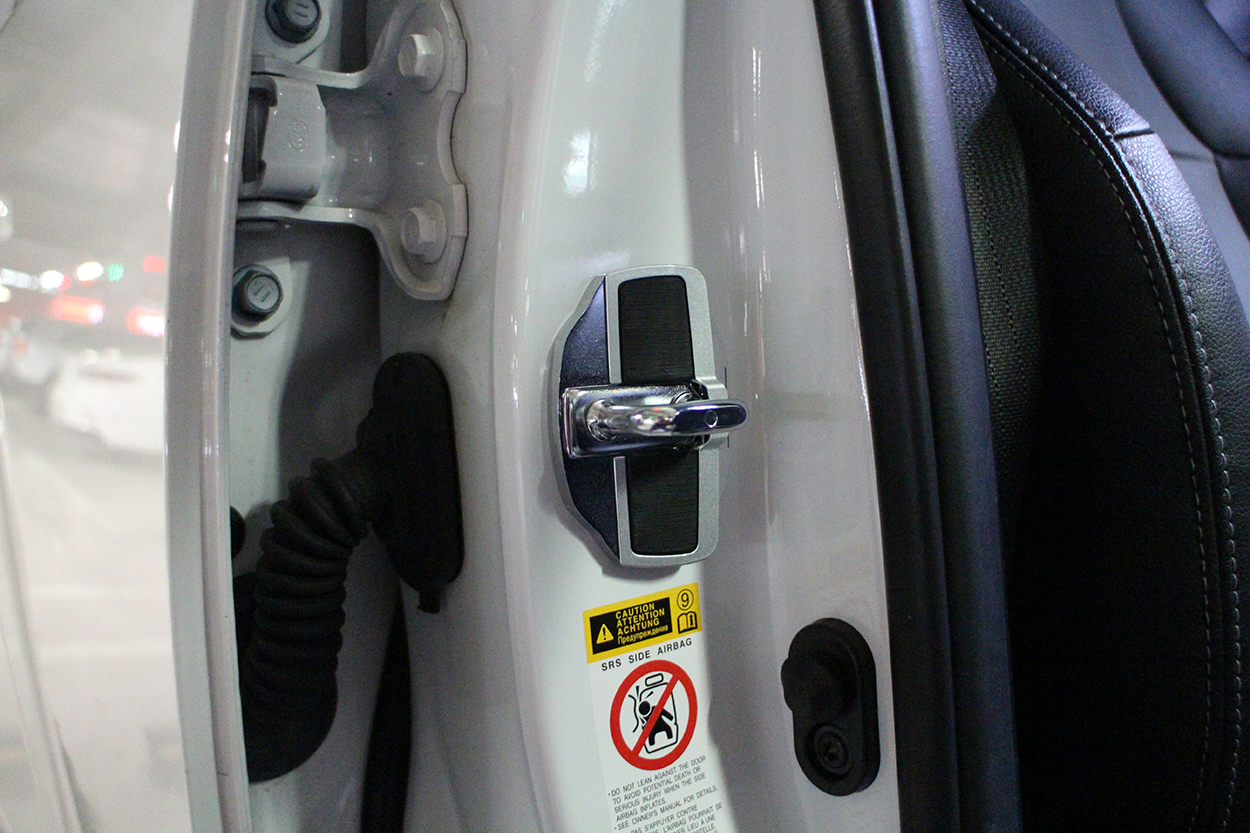 Do we need TRD Door Stabilizer on our 4Runners? Functionally, maybe not so much, but I like it because it’s another TRD part! Seriously, I was amazed at how much the wobble was reduced going over a speed bump. I haven’t tested but it would probably make driving over mogul terrain more comfortable, too.

I also like the aesthetics and engineering of the parts. The door striker parts are well constructed and when properly installed, the sliding mechanism does not touch the body, leaving about 1/16″ space. For this reason, I would stay away from purchasing the fake models as they could damage the door pillar.

The door stabilizers also dress up bare door bolts and it looks more luxurious—not that many people are going to see them. So, if you want a more comfortable ride with less than an hour’s work and without spending thousand dollars on a suspension upgrade, this mod could be for you.

Hello Trail4R-oids. People call me \"Jack-of-all-trades\" and my new hobby since owning a SR5 Premium in 2018 has become 4Runner mods. I also do all my maintenance since I now live where 4Runners are extremely rare, outside of American continents.

Does this product still allow for the use of foot steps that connect to the door striker? The ones that allow you to step up and access the top of the vehicle/roof rack?

I picked these up but had issues with my driver door – the door would not close (2022 ORP). Anybody else have issues?

Sorry to hear that Travis, Have you looked from the side and made sure there were no space between the base plate and the door? Does the sliding mechanism on the door striker slide in towards the cabin? If you still can’t close the driver side door, try swapping the unit with passenger side,

Installed these awhile back. Nice mod actually. The ride has become a bit more solid if that makes sense. The chatter when closing the door has been reduced. The sensation of the body swaying and twisting when overcoming speed bumps has been reduced (this is where i’ve noticed the biggest improvements). It’s actually a pretty noticeable difference once you experience the before and after

cal baker> Right on! I agree.

Last time I saw that truck it was in Miami! Glad to see you finally got it home with you.

Interesting review but very hard for me to believe with that much of a small contact will stabalized the door during bumps, turns, etc. I would think that the door hinges, which is the main support of the door would cause majority or if not all of wobbly body/door roll or the stabalization. Nice you tested it out but i’ll pass.

Hi Bob, I was skeptical as well but turned out that shakes from road bumps were reduced and the ride became much comfortable.