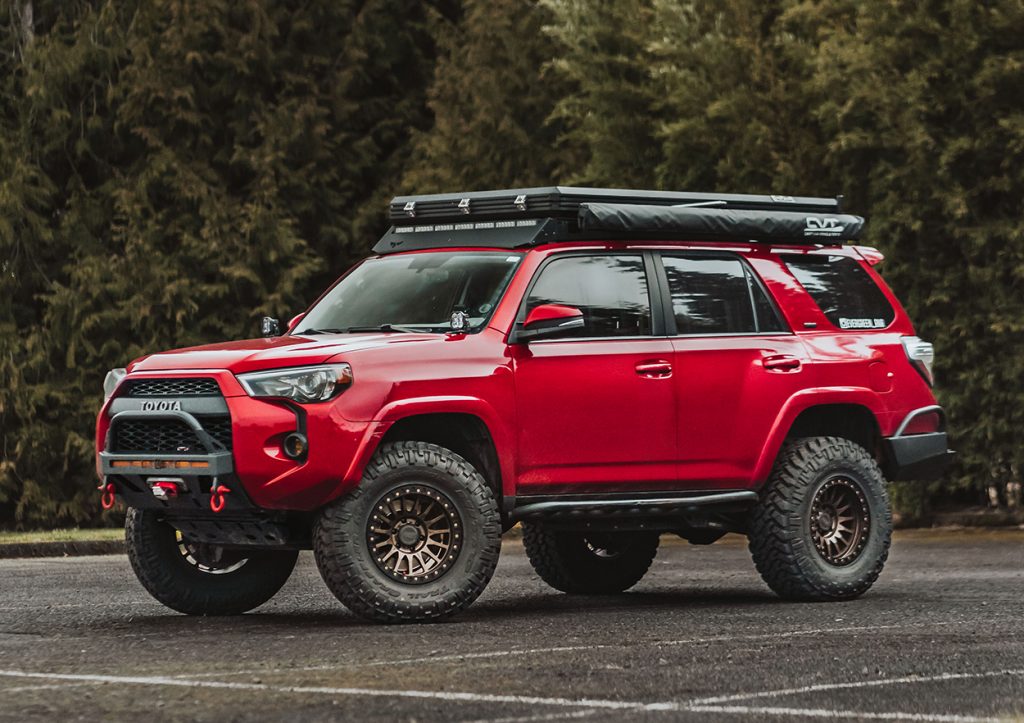 As we hit the end of the first quarter in 2022, there have been quite a few new wheel design releases. I wanted to quickly put together an overview of the most popular wheel companies and or the most popular wheel designs to look at throughout 2022. Last year, we drafted a post on the top wheel companies and wheel designs in 2021 and then before that a post back in 2019, so I wanted to draft up an article on what’s new for this year.

Sometime in late 2020, machined wheels started taking over, and they’re only getting increasingly more popular. Machined wheels combined with wild colors such as bright purples and bright blues seem to pop up left and right throughout most wheel catalogs. And with the big release of the BR6 in a massive -38 offset from SCS, wheel companies continue to push offsets within their current catalog as well.

Wheel styles such as the Fifteen52 Turbomacs started to make some traction in 2020 but quickly fell off. I think the chunky design with little to no spoke was just a bit too much (or not enough for that matter) for most of us. Cool idea, but it flopped. Very few guys are running that look.

Some of the timeless companies such as Method, SCS, and Relations Race Wheels continue to bring designs forward with a simple and refined look. And, of course, Black Rhino Wheels continues to push their limits in what’s possible for wheel designs, although their design style is a bit strange right now.

All that said, I just wanted to round up some of the wheel designs that are either new in 2022 or holding strong in terms of relevance from years back.

RRW (Relations Race Wheels) is launching a massive group buy. RRW is offering a very exclusive, one-time opportunity to get in on this sale. This has never been done before, likely won’t happen again, and is at a massive savings off retail. It took a lot of convincing as RRW, as a company, doesn’t need help with selling wheels. There are only so many wheels allocated, and when they’re gone… they’re gone. Up to 30% off, which is about $622 off a set of 5 with aluminum protection rings. Going live 4.13.2022. 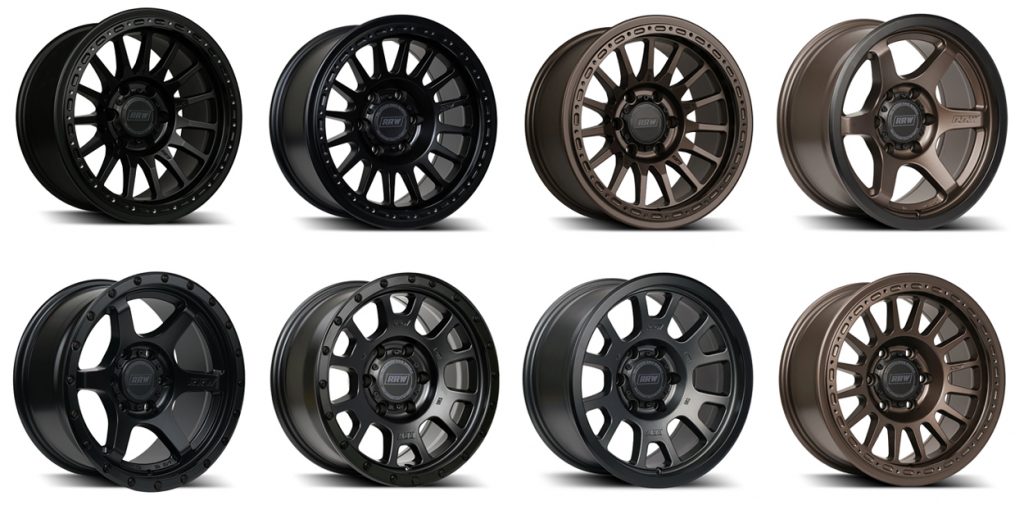 Relations Race Wheels or RRW is a standout company to look at in 2022 as they’ve been continuing to push the limits with new designs, hybrid beadlocks, forged wheels, protection rings, beadlock rings, and more. They offer a really high-end design style, almost similar to that of the SCS style; however, their designs are a bit more original. Relations Race Wheels is a company to keep your eye on in 2022 and into 2023 as they are set to possibly release two-tone hybrid beadlocks with massive offsets; we’re talking -25mm and -38mm – lots of exciting stuff in the works. 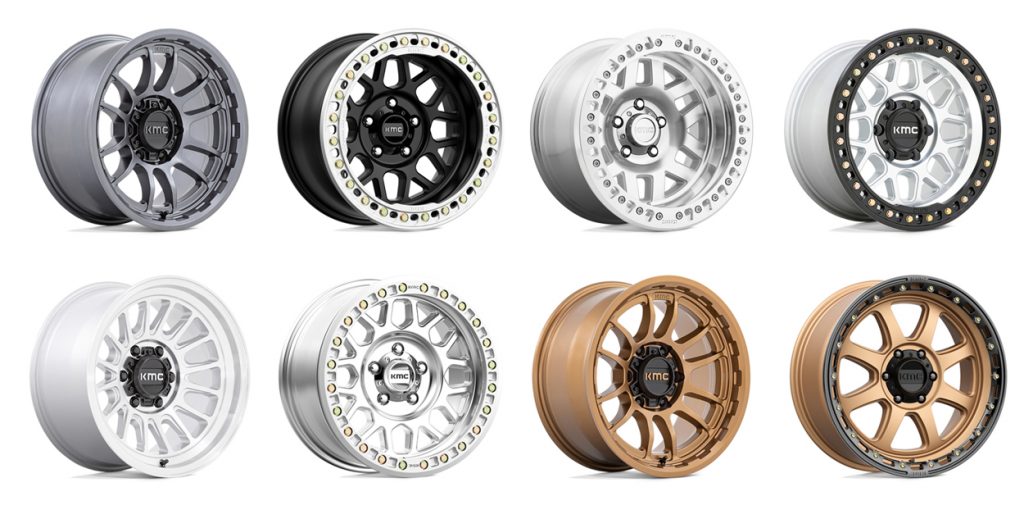 KMC is currently crushing the wheel game. They offer a super fire lineup of machined wheels as well as run-of-the-mill black, bronze, gold, and gunmetal offerings. They offer a pretty extensive line and are backed by a big budget from their parent company, Wheel Pros. That being said, you can expect consistent wheel designs to drop from KMC well into late 2022 and into early 2023. I really like most of the designs in this lineup. 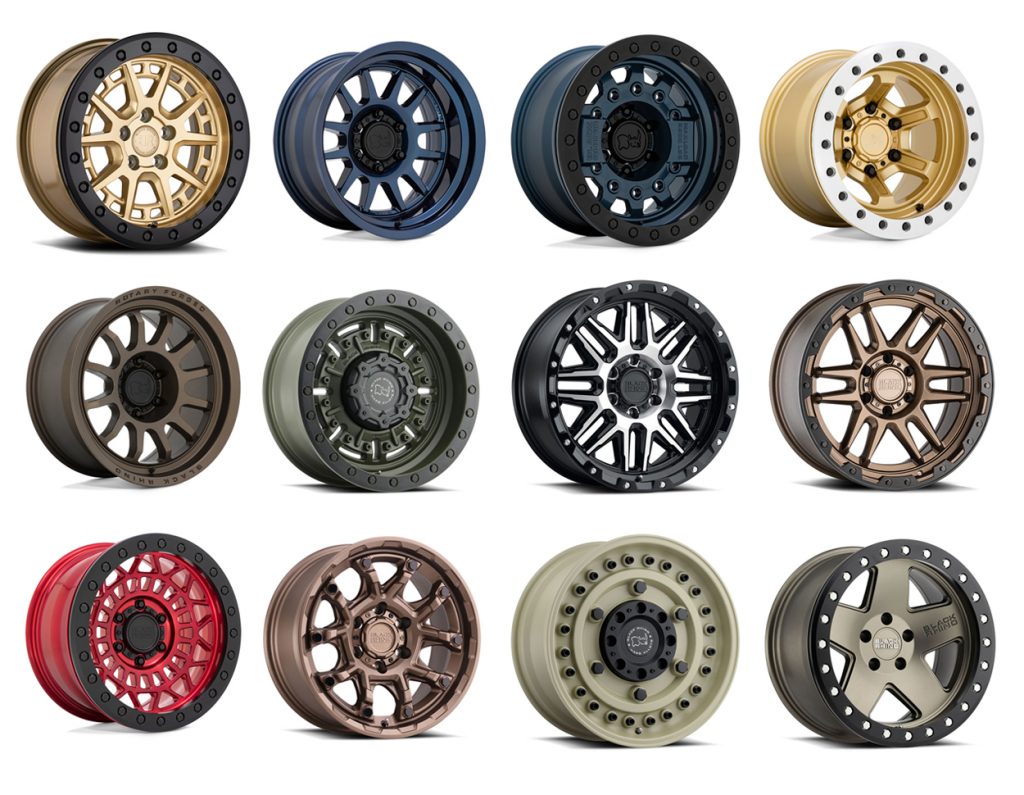 Black Rhino Wheels has been a leading company in the aftermarket will game for a few years now. Wheel Pros recently acquired them, and although Wheel Pros as a company has some outstanding wheel designs and companies (KMC, Fuel, etc.), Black Rhino seems to have shifted their design style a bit. A few of the new designs are leaning slightly on the bro side, which is cool if that’s the look you’re going for, but Black Rhino used to have that military-focused design only. They still retain this look on some of their wheels, but I am personally not a fan of some of these new designs. Maybe in 2023, they might circle back to what they were best known for. 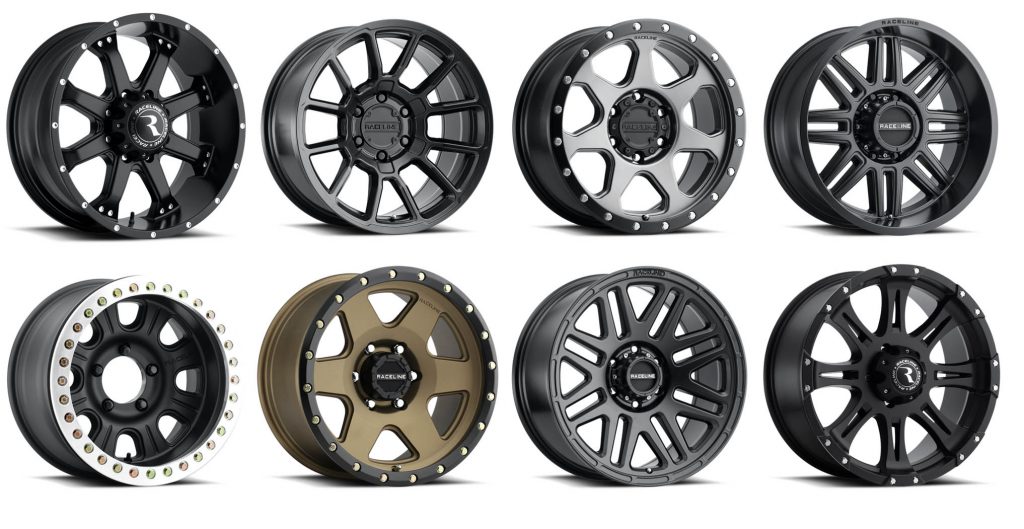 Raceline Wheels offers quite a few options, including standard truck and SUV street wheels along with off-road beadlocks. They have a huge offering that includes more than just truck wheels, but they are known for their beadlock offering.

SCS has carried the same line of wheels since 2014, and they continue to hold strong with that line. Hopefully, they will start pushing out some new designs soon. When I bought my first 5th Gen in 2014, these were the pinnacle of refined off-road wheel designs. It’s hard to stare at the same wheels for almost ten years. Let’s go SCS… Let’s get some new designs going!! 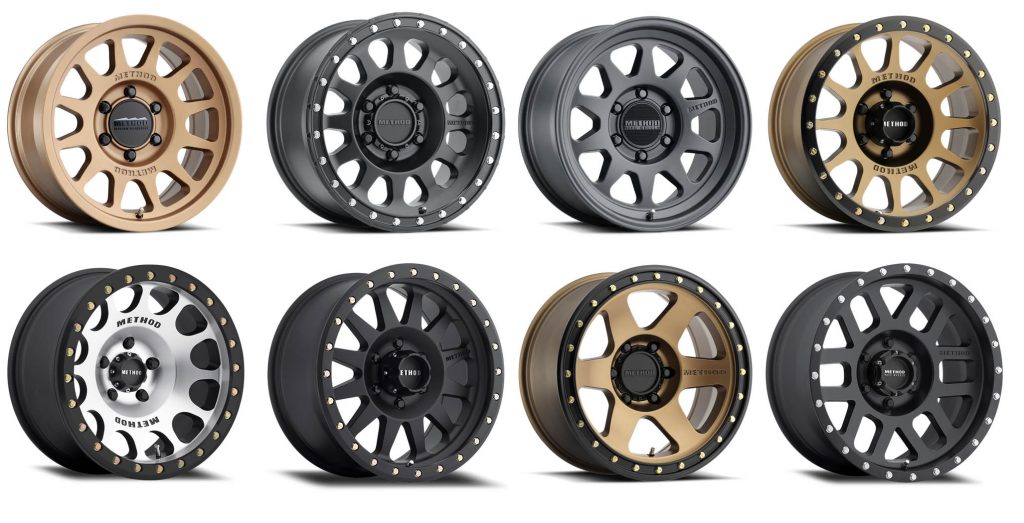 Method is another company that’s been around for a while and continues to offer the same line. Although Method seems to add a new design each year, the new additions are minimal and aren’t “game changers” either. The 605 and 108 are some of their newer wheels and seem to be doing well, but nothing stands out as absolutely mind-blowing from Method lately. 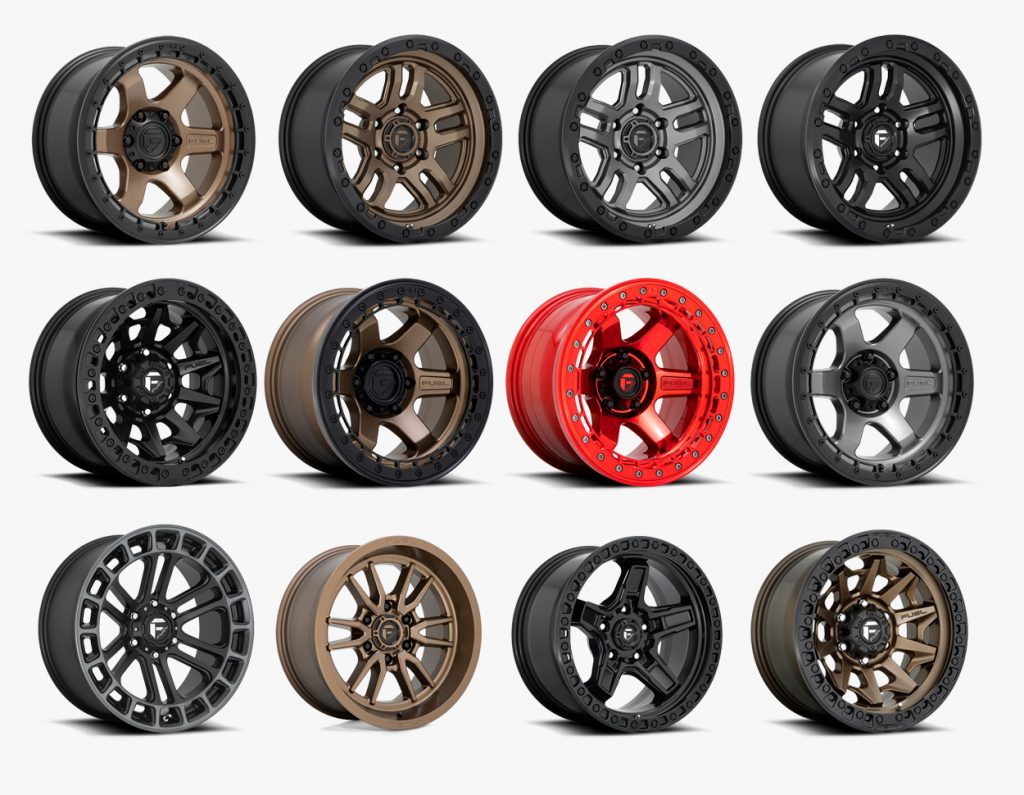 Fuel has been around for decades and continues to add to its lineup each year. Fuel is owned by Wheel Pros and is backed by a pretty massive budget. They sponsored Ken Block recently and launched a new wheel under his name… “Block”. They also launched the Ammo this year, which is incredibly similar to their super popular wheel, the Anza. In any case, Fuel is still a big player in the wheel game, even though there are quite a few Fuel haters out there.

One of the most prominent players in the wheel game for sure is the Rays Wheels Volks. The entire Volk line from Rays Wheels is incredibly impressive. A must-see line if you have not heard of Rays. Within their 4×4 line and offered in the 17″ size are the Gram Lights and Team Daytona wheels. Anything from Rays Wheels is a win in my book. These wheels are not cheap at all, but they’re really nice. 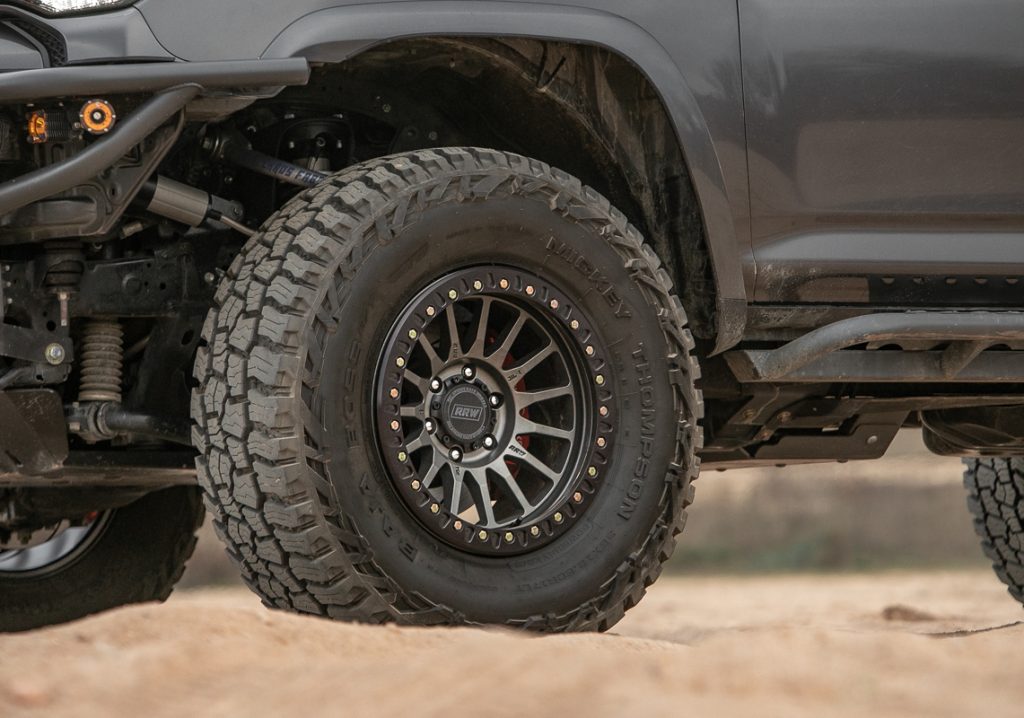 There you have it. The top wheel designs and wheel companies to look at in 2022.

Is there a way to get a spec list of the red 4Runner at top? Such an amazing build

no Hutchinson rock monsters? Too bad, seem to be the only two-sided beadlock wheels.

Great write-up as always!
Summit Offroad has some really nice designs for our Yotas. I’m really liking the Dakars as they just fit the look of our 4Runners so well.
Also looking at RRW and SCS too, so many choices!

I’m a big fan of the RRW wheels, that being said, If the look of the protection ring was as detailed and nice as the true bead lock ring, I’d be much more interested. It looks so plain compared to the bead lock ring!

How do you get in on the group buy? is there a code?

the link is in the RRW IG Story, should be live at 12 PM PST