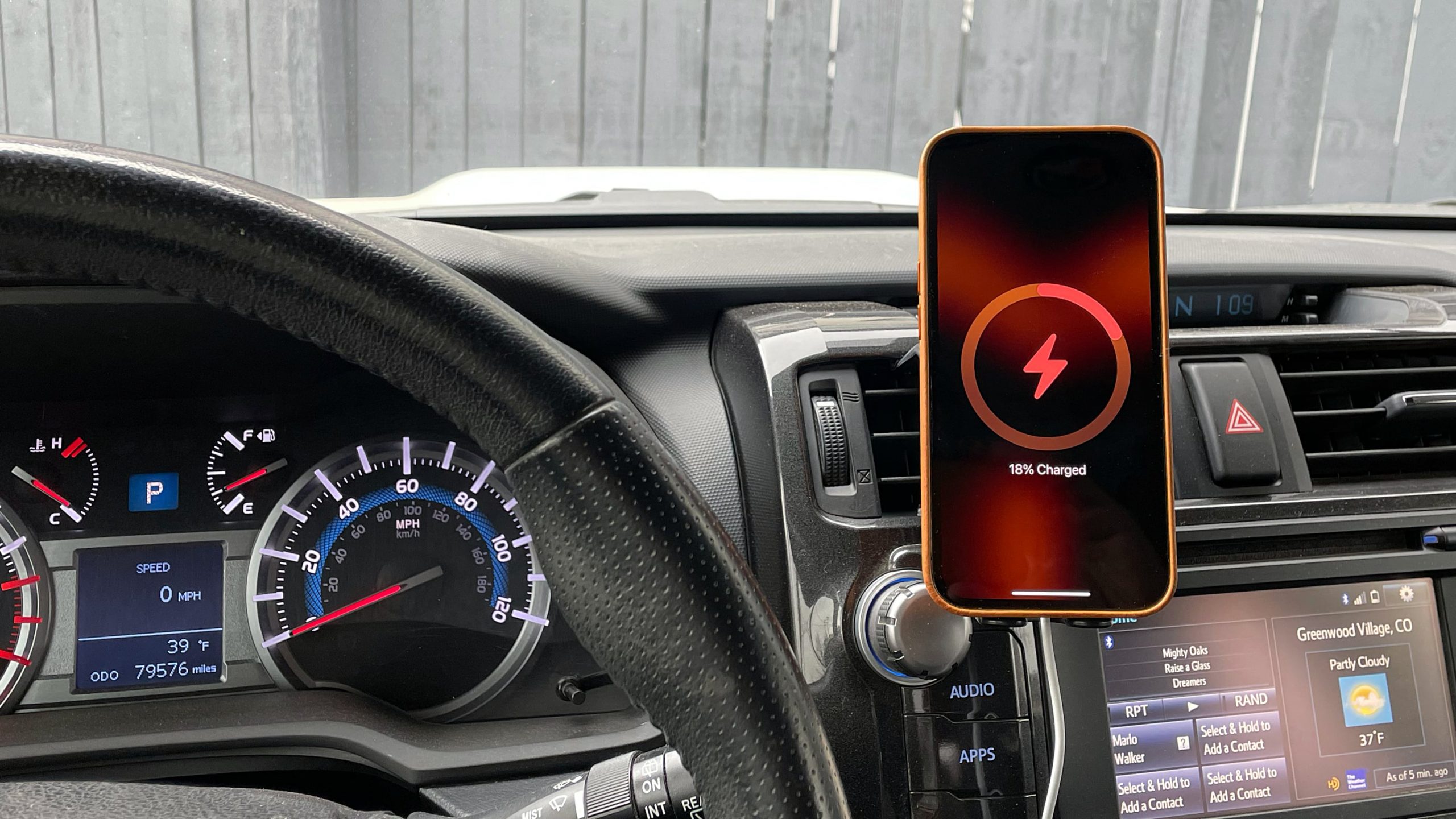 Introducing the Toyota 4Runner Center Dash Mount from ProClip: Attaches To The Center Vent on the Dash

We can all agree that a new lift, fresh tires, and body armor are all great upgrades for off-roading and overlanding, but I think that upgrades inside the vehicle can also be quite useful.

One of my first interior mods was replacing all the interior lights with LEDs, followed by an improved sound system. In today’s article, we will focus on a simple and cheap upgrade – an all-in-one smartphone mount and charging solution.

I don’t know about you but when I think of the 4Runner entertainment unit (especially the one before the 2020 Apple CarPlay update) I think of a system with very limited capabilities, since it’s basically 12 years old now. In my 2014 4Runner Trail Edition the only thing I use is the Bluetooth connection to listen to the music and podcasts; for all the other tasks like navigation, weather forecasts, making calls, and messaging I rely on my smartphone, an Apple iPhone 13 Pro.

For the past 3 years, I’ve been using a cheap, generic smartphone mount that attaches to the vents of the dashboard. So far, it has worked well enough to hold the phone in place most of the time, but it’s not really solid and when off-roading the mount starts to bounce left and right. I also don’t like the locking mechanism because I have to squeeze the side brackets every time I set the phone down and push a button on the back to release those brackets so I can grab the phone.

I eventually felt the need to upgrade to something else with a better design – something more robust and functional. Since the new iPhones support wireless charging I also wanted a mount that was compatible with MagSafe so that I wouldn’t have to manually plug the charging cable every time I wanted to charge the phone. Also, the MagSafe can double as a locking mechanism which would remove the need for any type of clamp and also make the mount look cleaner.

As many of you may know, one of the most popular companies that make great device mounts is RAM Mounts. They offer many different mounting solutions like a mounting plate that requires drilling, a suction cup, and an adhesive base. I wanted to avoid drilling or gluing stuff to the dashboard and I didn’t want suction cups because I like to have my windshield free of clutter. What I was really looking for was to keep the dashboard vents as the mounting location, but with a better product.

After some further research, I came across a company I hadn’t heard of before called ProClip USA. They’re based out of Madison, Wisconsin and they import and distribute the ProClip device mount solutions which are engineered and manufactured in Sweden. The reviews were good and they had sales at the time so I decided to try that out. 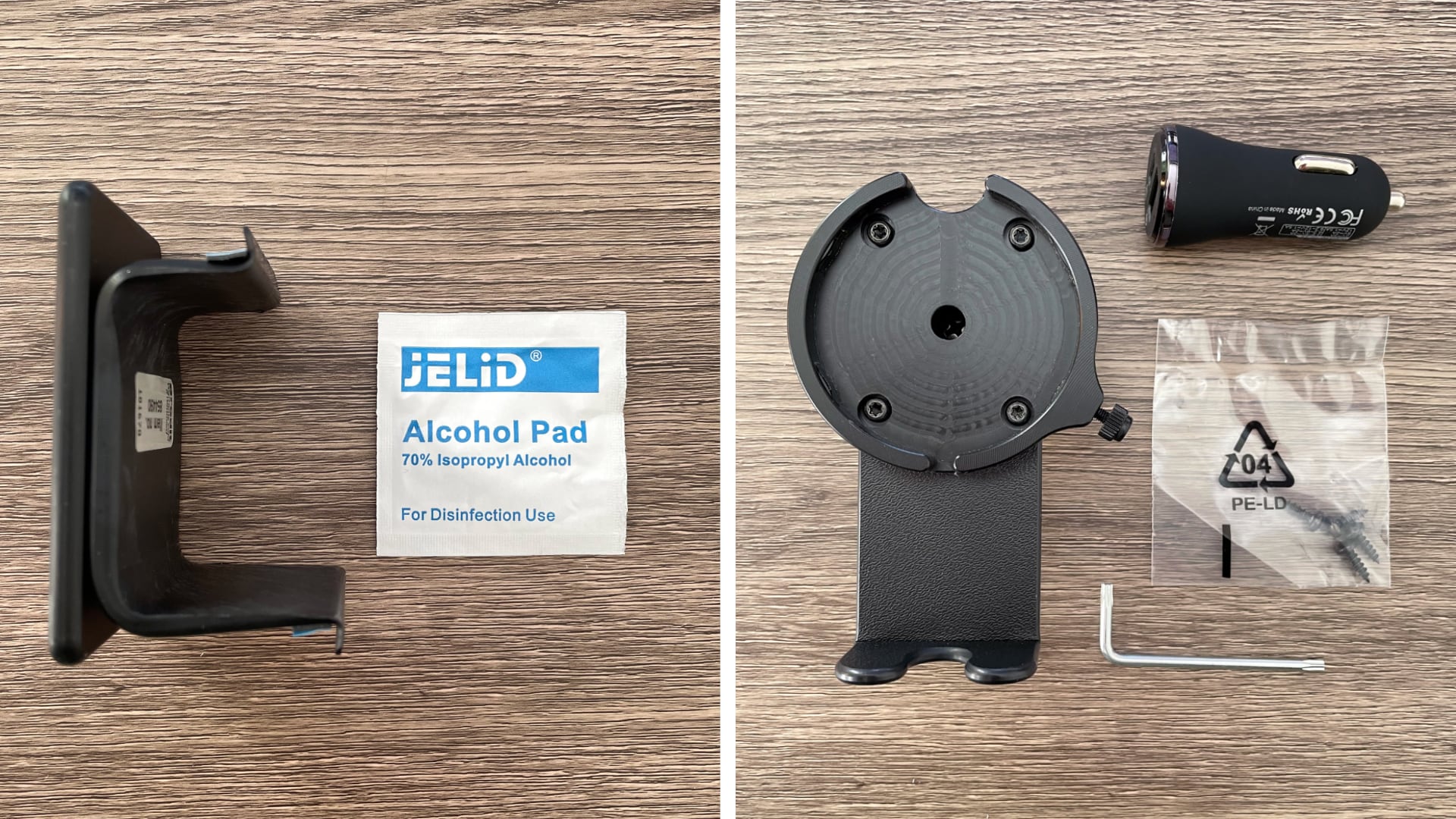 The ProClip mount purchasing process was easy thanks to a well-built website. Right from the homepage, you can find an option to guide you to build your mount step-by-step. In the first step, you are asked to input the make, model, and year of your vehicle so that you can filter out the mount base specific to your vehicle. All their options are listed above.

I chose the center dash mount option because that’s what I like best and I’m used to that. It sits just next to the steering wheel so I can peek at the phone while driving and it’s also in a good position to run power cables down to the lower console 12v/USB ports. My second choice would have been the A-pillar mount, but perhaps I will get that for another device in the near future.

In the second step, after choosing the base you are asked to select the type of device you want to use the mount with. Depending on the phone, there is a different custom-designed option to best the model you have (also accounting for a protective case).

This option is designed to work directly with the Apple MagSafe wireless charger, which I find convenient because I can remove the charger at any time without having to remove the whole mount and use it somewhere else when needed (at home or around camp, for example). I also opted for the phone holder version of the mount with supporting feet because I thought they could provide additional support and prevent the phone from sliding downward when the truck is bouncing up and down on the trail. The feet can be removed at any time if you want a more minimal look, but alternatively you can just buy the variation without feet at all.

ProClip USA provides detailed instructions tailored to which mount you bought and which vehicle you have. I found the installation very quick and easy; the only additional tools needed were two screwdrivers – Philips and Torx. 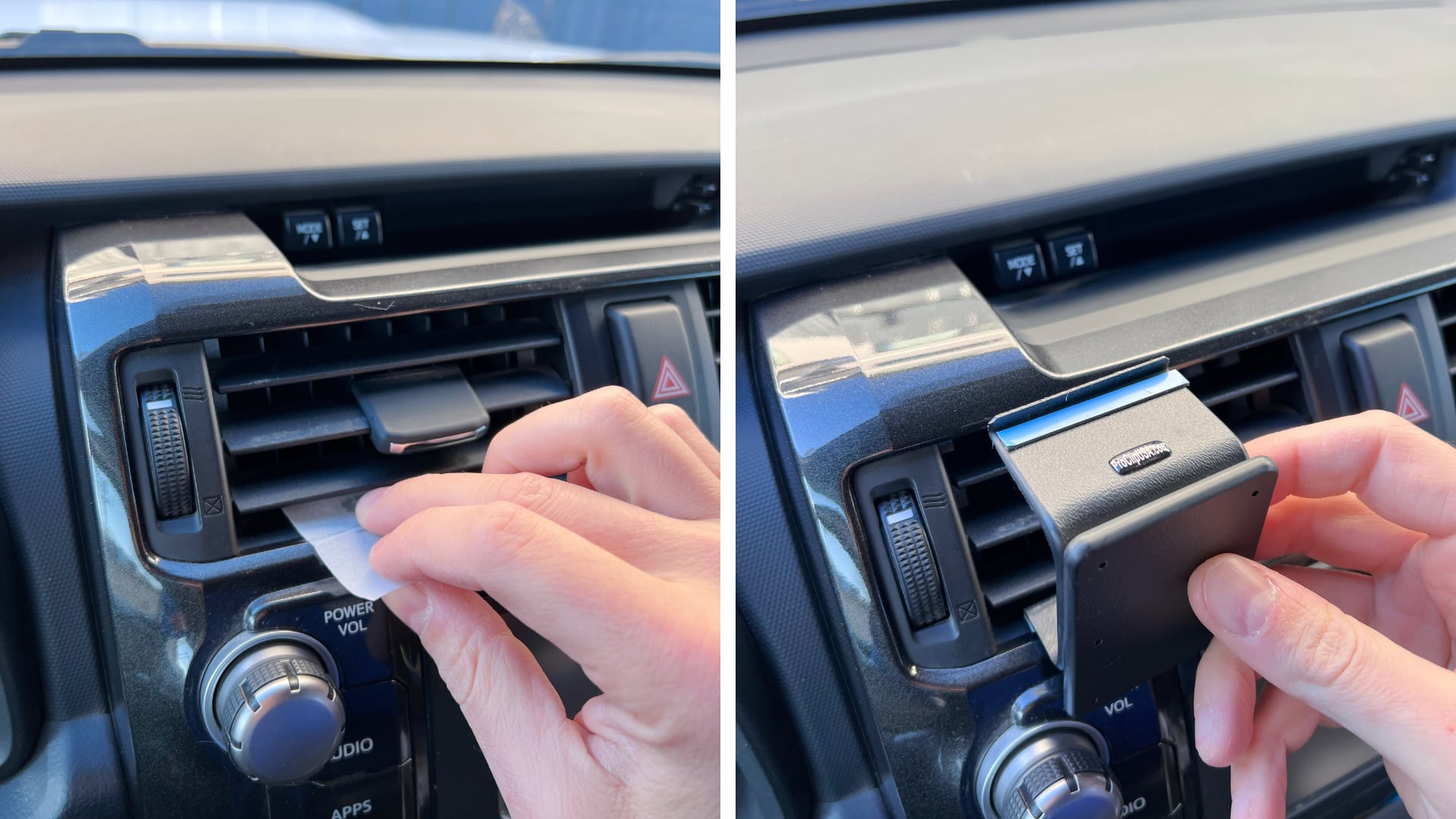 Before installing the mount it’s a good idea to clean the area on the dashboard you choose for the installation. Included in the package you will find a small alcohol pad that you should use to wipe the surface clean to maximize the adhesive. This is a good time to test fit and decide on the mount location you like most.

Step 2. Install the Base Mount 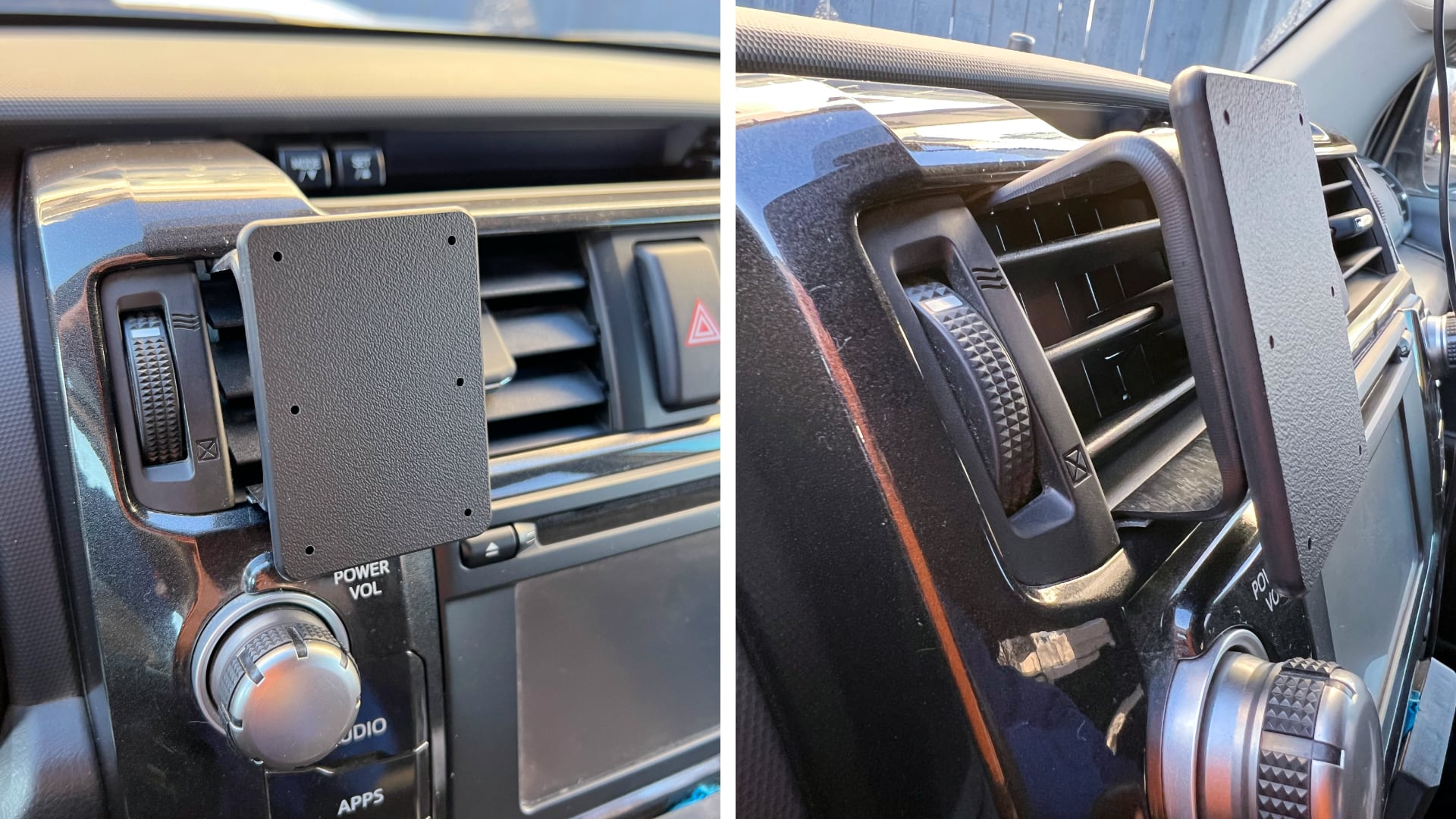 Once you’ve decided on the location, peel off the cover from the adhesive tape from the top and bottom lip of the base mount; the part with the ProClip sticker logo should face up. Next, press the thin angled edge on the lower part of the mount into the seam/gap between the air vent and the surrounding panel frame.

With the bottom part in, try to push down a little so the adhesive makes full contact. Then, press firmly on the top to slightly bend the mount and repeat the same process for the top angle edge. Finally, push up with your finger to make sure the top angled edge is all the way into the gap and the adhesive is making full contact. If the final position is not what you wanted, you can push on both edges to release the mount and make adjustments. This mount extends approximately 1″ from the air vent so it can easily be adjusted, without blocking the airflow.

During this step, I had some difficulties while trying to “insert” the bottom edge of the base holder into the dashboard. The top edge went in just fine, but the bottom one was only halfway through. After a few tries, I decided to stop forcing it down to avoid damage to the dashboard and I decided to contacted ProClip USA for support.

They were very quick to reply and they told me that the bottom edge lip should go in with no problem. They offered to send me some small pry tools and additional double-sided tape to help with the installation, but unfortunately, that didn’t make any difference. What I ended up doing was just adding two additional layers of tape to fill the gap and have full contact between the tape and the dashboard. 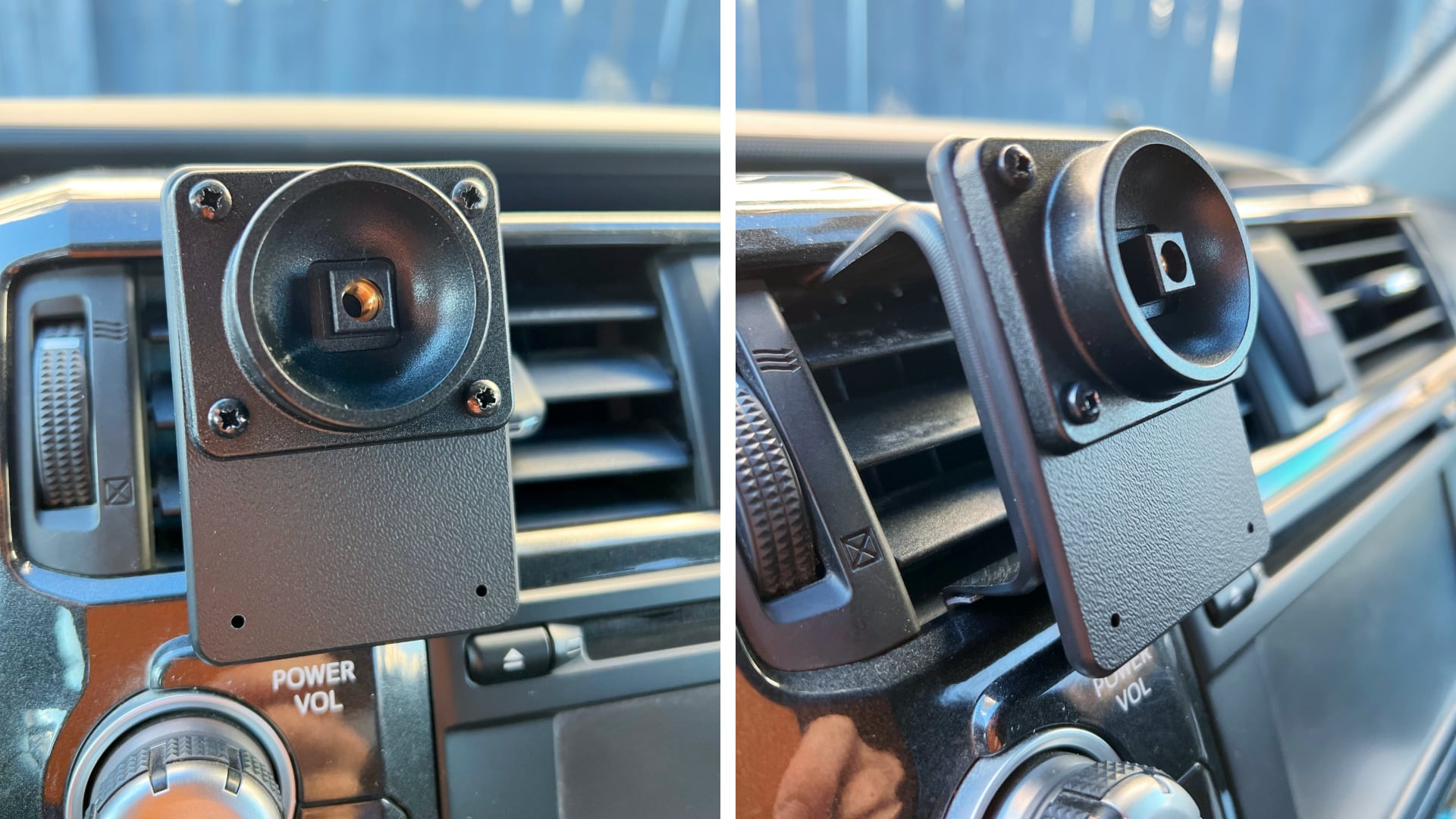 With the base mount in place we can now move to the phone holder. This is composed from a base plate and a holder. With a Philips screwdriver loosen the screw in the center of the holder so you can separate it from the base. Then place the base plate on top of the previously installed dash mount and screw it in with the 4 screws at each corner.

When that is done, reattach the holder to the base. The back of the holder is round allowing you to swivel it and orient in the way you prefer. 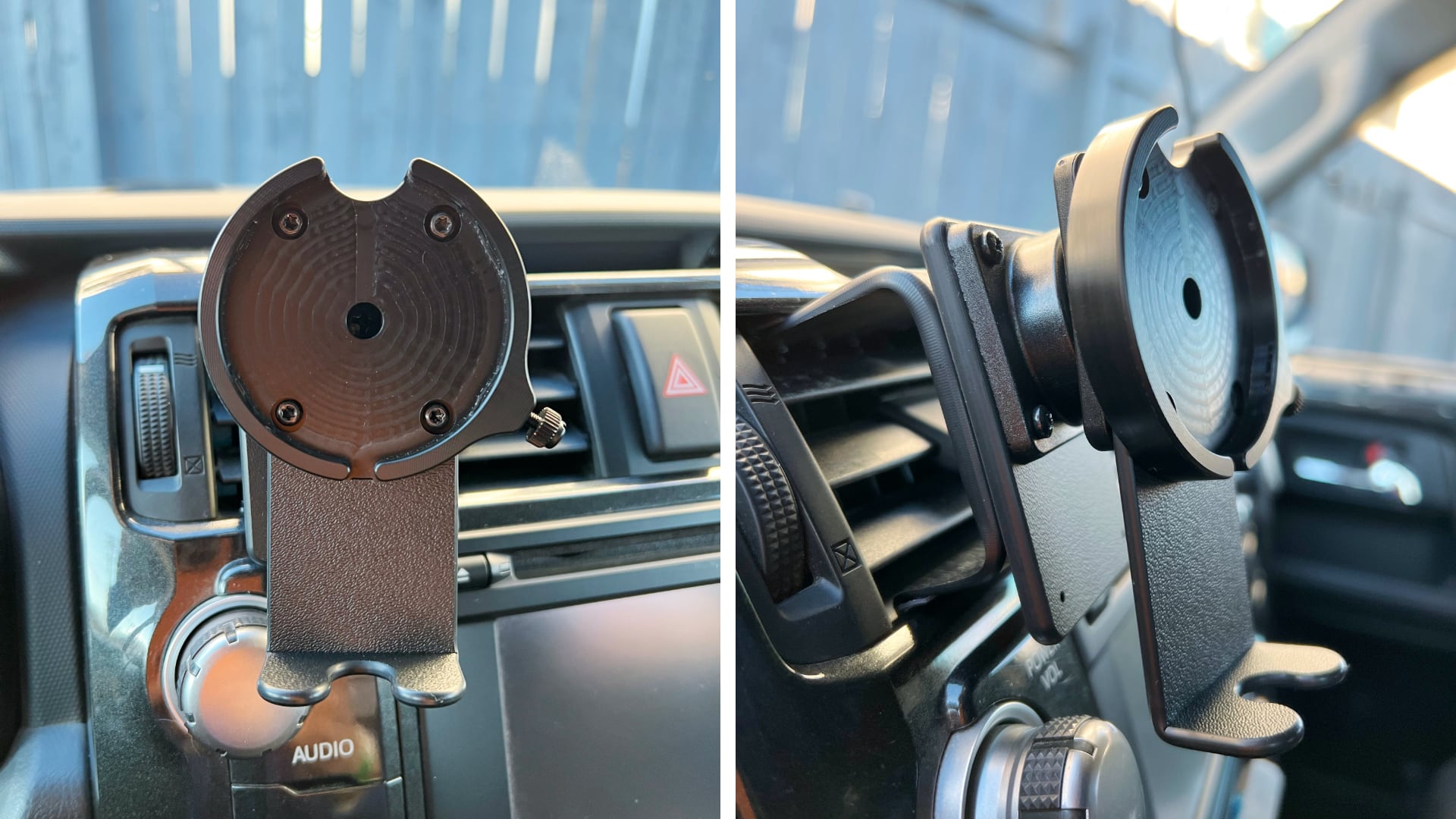 Finally, locate and loosen the 4 Torx screws on the base of the MagSafe holder. Then take your phone and test fit it so that the height of the support feet will match with the location of the magnets on the back of the phone. 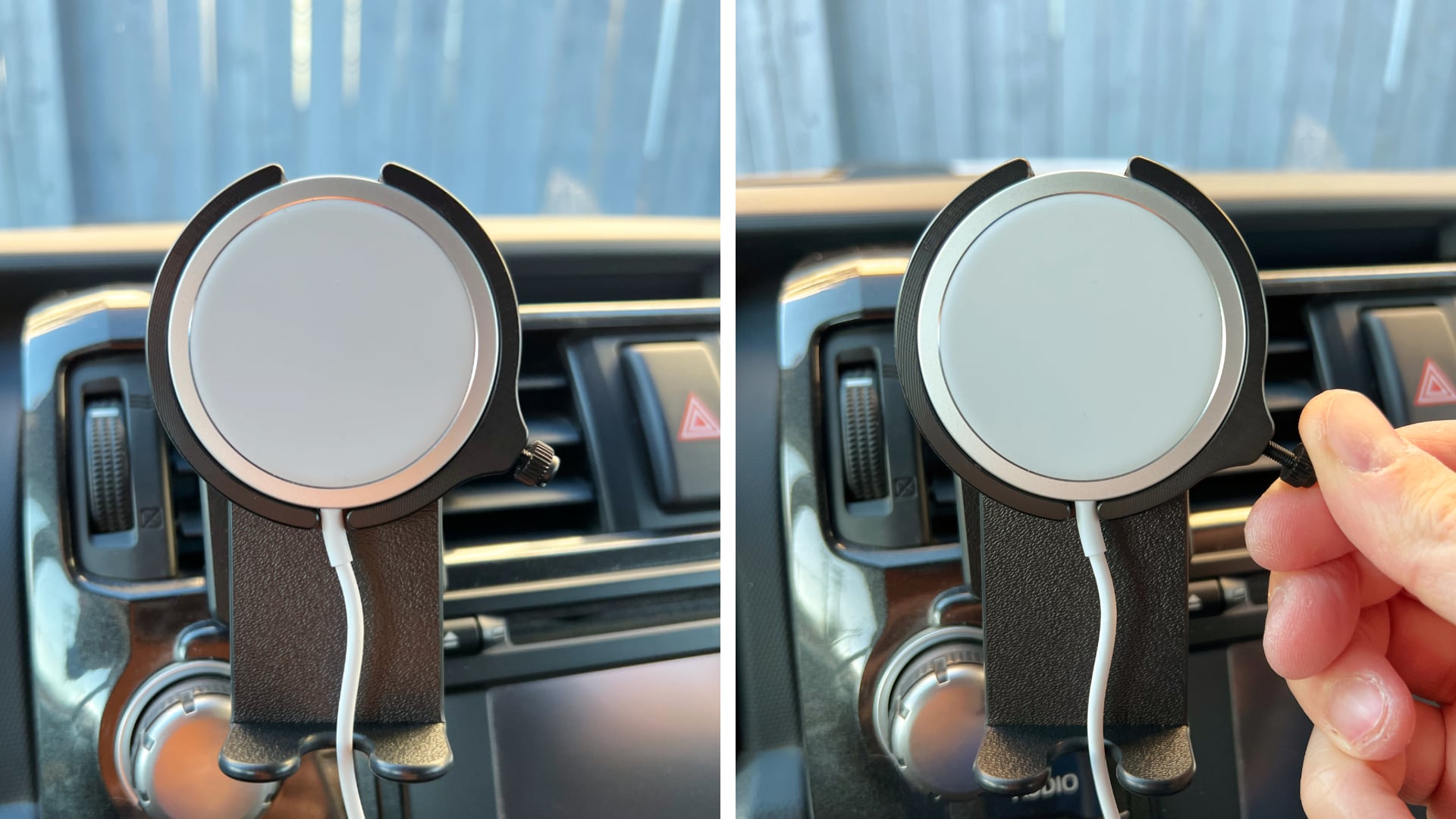 The last part of the installation involves placing the MagSafe into the base of the holder, with the charging cord going through the small opening in the bottom. It’s a tight fit, but with a bit of pressure applied, the MagSafe will snap right into place. For some added security, on the side, you will note a small screw that you can use to put some extra pressure and lock the MagSafe in place. Do not over tighten it, or you might snap the screw. 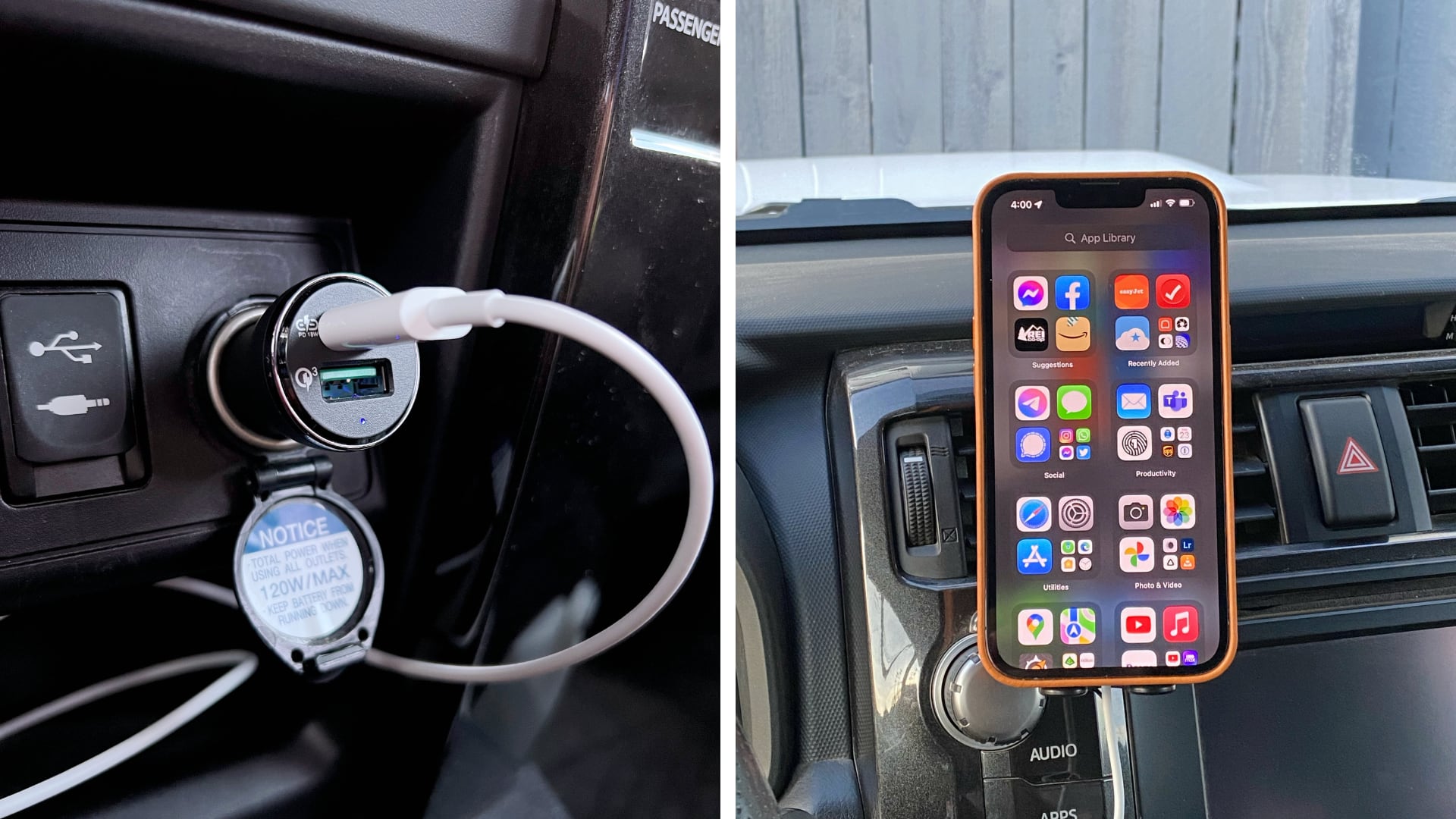 For the last step, plug the provided 12V adapter into the cigarette lighter port (or anywhere else you want to run power from), then plug the MagSafe charging cable into the USB-C port.

With everything connected, it’s time to place the phone on the mount! If you aren’t familiar with MagSafe, whenever your phone gets close to the charging base it should self-align (thanks to the magnets), snap into place, and start charging. You’ll see a little animation on the screen to confirm that it’s charging. Now is a good time to check the final result and make sure you’re satisfied with the position; you can make any final positioning adjustments needed.

Aside from that small issue with the base mount mentioned above, the installation process was pretty fast and easy. I tried to shake the mount with my hand and it really feels solid and sturdy. After a couple of off-roading trips I was happy to see that it didn’t move at all and it kept the phone right in place.

I also played around with the MagSafe’s magnet which turned out to be surprisingly strong; I was able to use the phone in landscape mode while using maps navigation with no issues. Finally, I love the fact that I can just grab and put down the phone in an instant, without having to push buttons, unplug cables, release clips, etc. Something I might change in the future is to remove the phone support for a more minimal look and improve the cable management.

If you have any additional information, please leave a comment below or hit me up on Instagram, @trail_runn4r. Thanks for reading and see you on the trails!