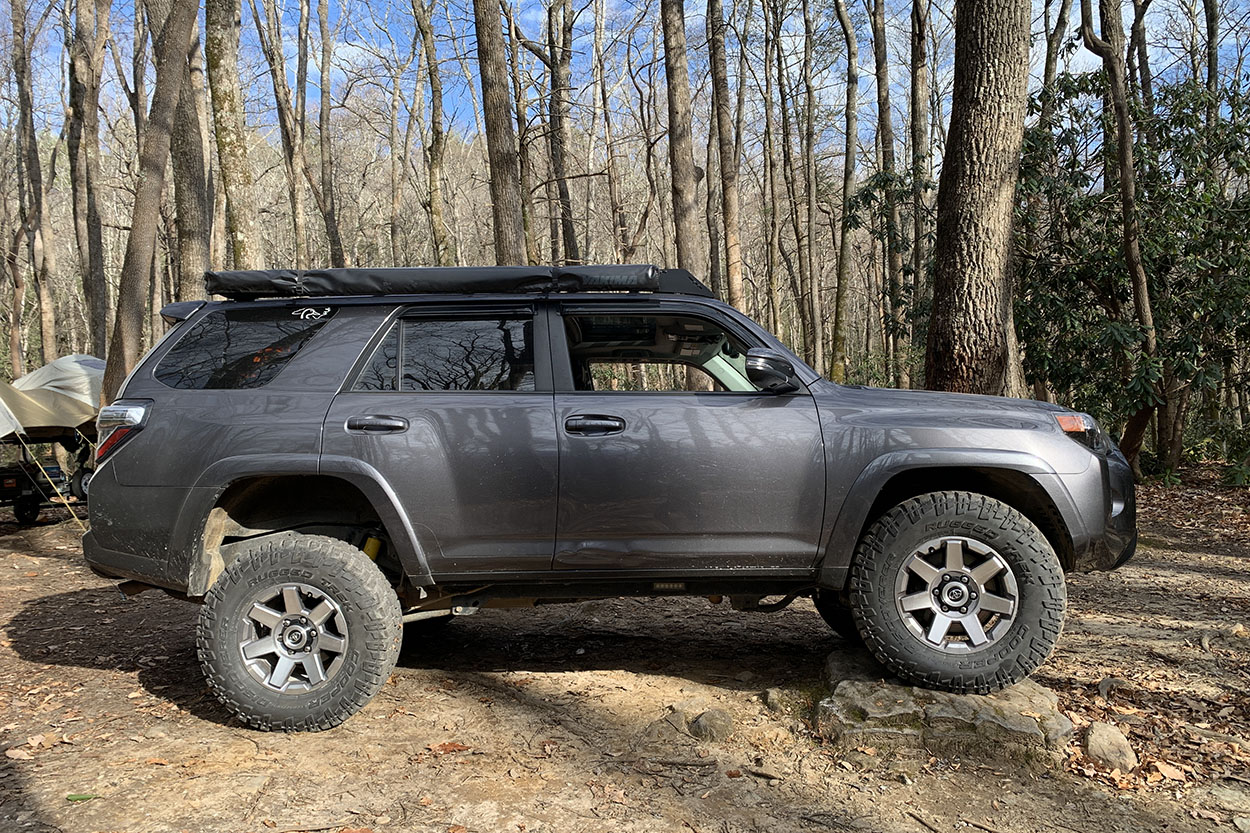 A relatively newer tire from Cooper (released in early 2021), the Cooper Discoverer Rugged Trek walks the line between an All-Terrain and a Mud Terrain, being loosely classified as a “hybrid” tire.

I knew this when I ordered them, but was admittedly shocked by the amount of tread/overall beefiness of the tires when they arrived. Featuring two sidewall options, they provide a small style choice to accompany their rugged look. The tires mounted extremely easily and took to road force balancing pretty well.

Two out of four tires balanced almost perfectly, leaving the other two needing a bit more attention, but I attribute a lot of this to my stock Toyota wheels which have a history of being difficult to balance.

These tires are mounted on a 2016 Trail Premium, with a Dobinson’s 2″ suspension, Spidertrax Spacers, and the factory Trail wheels. This setup required a body mount chop and a decent amount of trimming to the fenders/wheel wells. On this 4runner I have had the following tires for comparison:

Why I Chose the Cooper Discoverer Rugged Treks 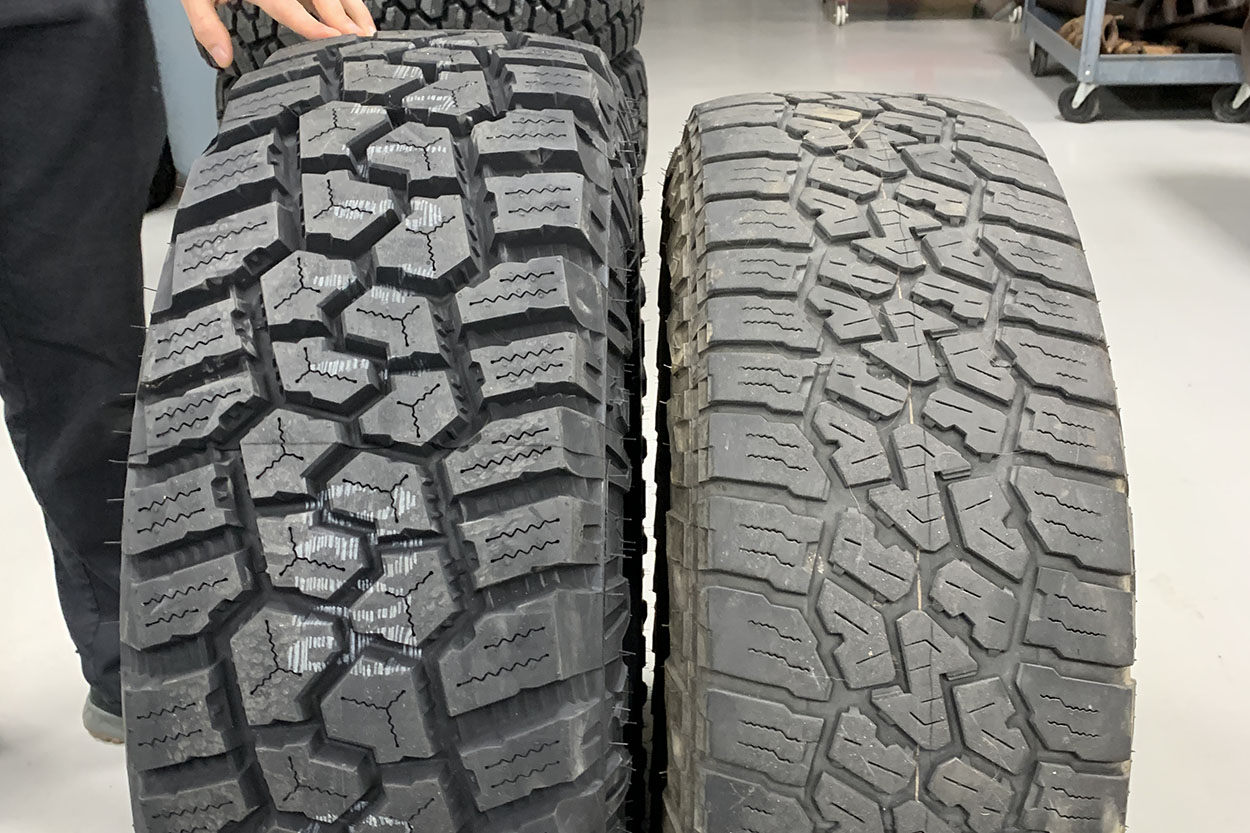 After installing a 2″ Dobinson’s suspension, I had a great excuse to bump up to a larger tire. Personally, 285s fit the bill for me of maintaining visual proportions, adding a bit of height/width, but keeping things practical for a daily driver. The two obvious (and popular) choices were BFG KO2s and Falken Wildpeaks. Personally, I did not like the wet traction of the KO2s when I had them, so they were out, leaving the Falken Wildpeaks as the other choice.

The Falken’s have been great, everything about them, and I have zero complaints, but I also wanted to try something new, which led to a long excel spreadsheet and countless back and forth moments of tire comparison.

Ultimately I landed on the Rugged Treks due to the sweet spot they fell in as it relates to weight, cost, performance rating, and of course looks. Not to mention, I have had Cooper’s (ATP/AT3 lineup) in the past on a 3rd generation 4runner and knew their quality and longevity.

Features and Performance of the Rugged Trek 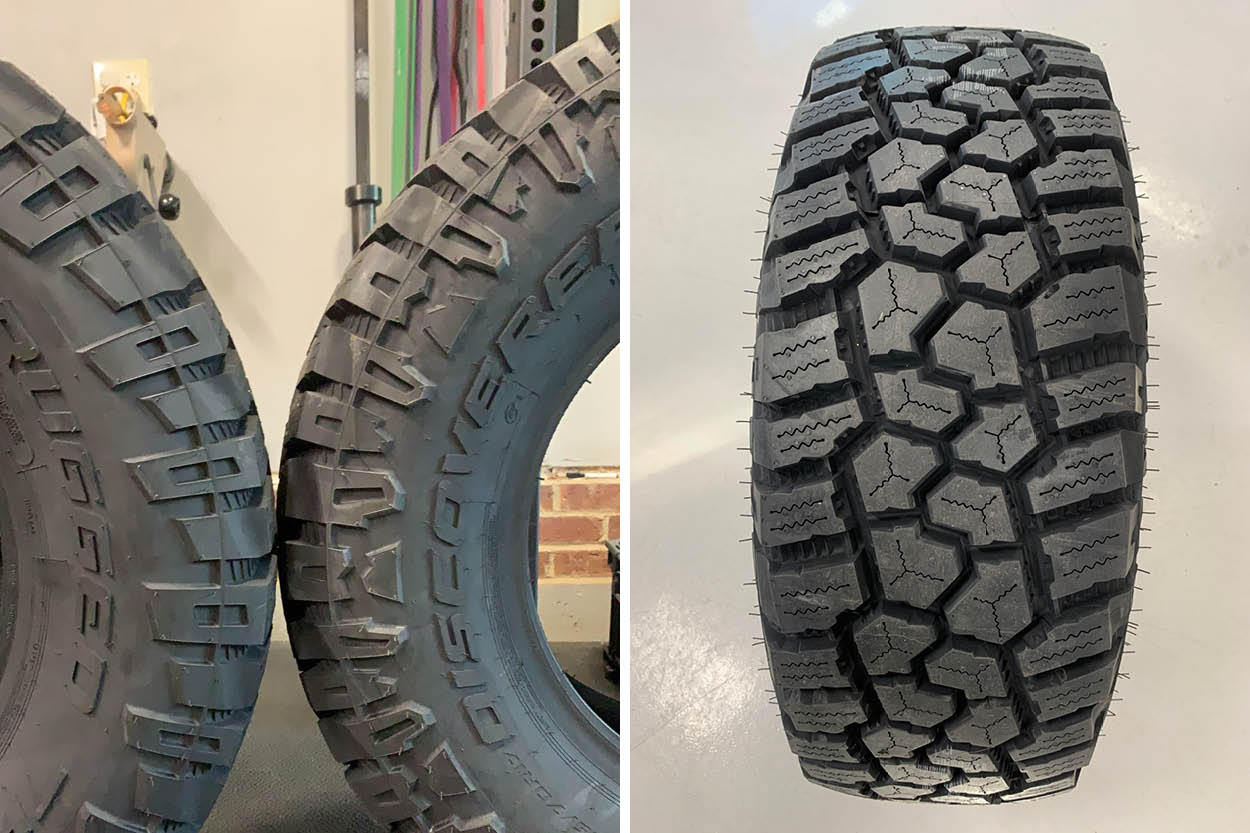 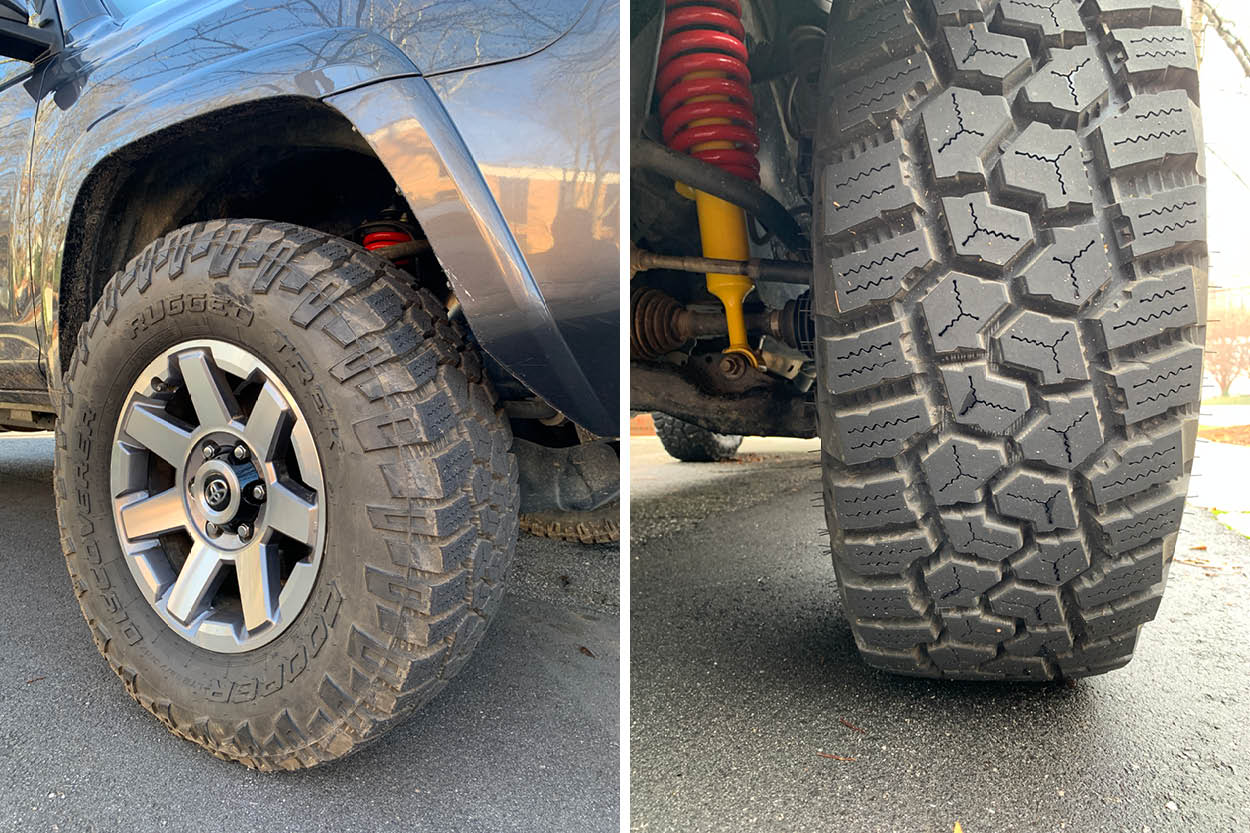 I have only had these tires installed for about 800 miles, so this is a very early overview, but so far I am impressed with these tires.

Because I made a lot of changes at once (most notably, suspension), it is hard to assess a 1:1 comfort rating. I went from a stock size SL (31.56″) to a larger E load (33.03″), so things obviously felt different on the road, but all in all, I am very impressed with the overall comfort from such a large, aggressive tire. At commuting speeds (below 45mph), they feel amazing. Smooth, grippy, and controlled are all words I would use to describe them.

Reaching interstate speeds (70mph-80mph), this still rings true, but you “feel” the road more. The lugs follow the grooves in the pavement a bit and the inconsistencies in the road are carried through the stiffer rubber into the steering wheel. For anyone with larger, heavier ply tires, this is all probably common, but it was an initial shock from a stock SL size.

If you believe in the accurate scientific properties of a decibel meter app for your phone, then I can tell you that these tires are actually several decibels quieter than my stock size Falken’s with ~50% tread. That’s hard science there, a 285/70 with 18/32″ tread is quieter a 265/70 with 7/32″ tread, at interstate speeds. I was pleasantly surprised. Audibly I heard nothing more than the typical AT hum. 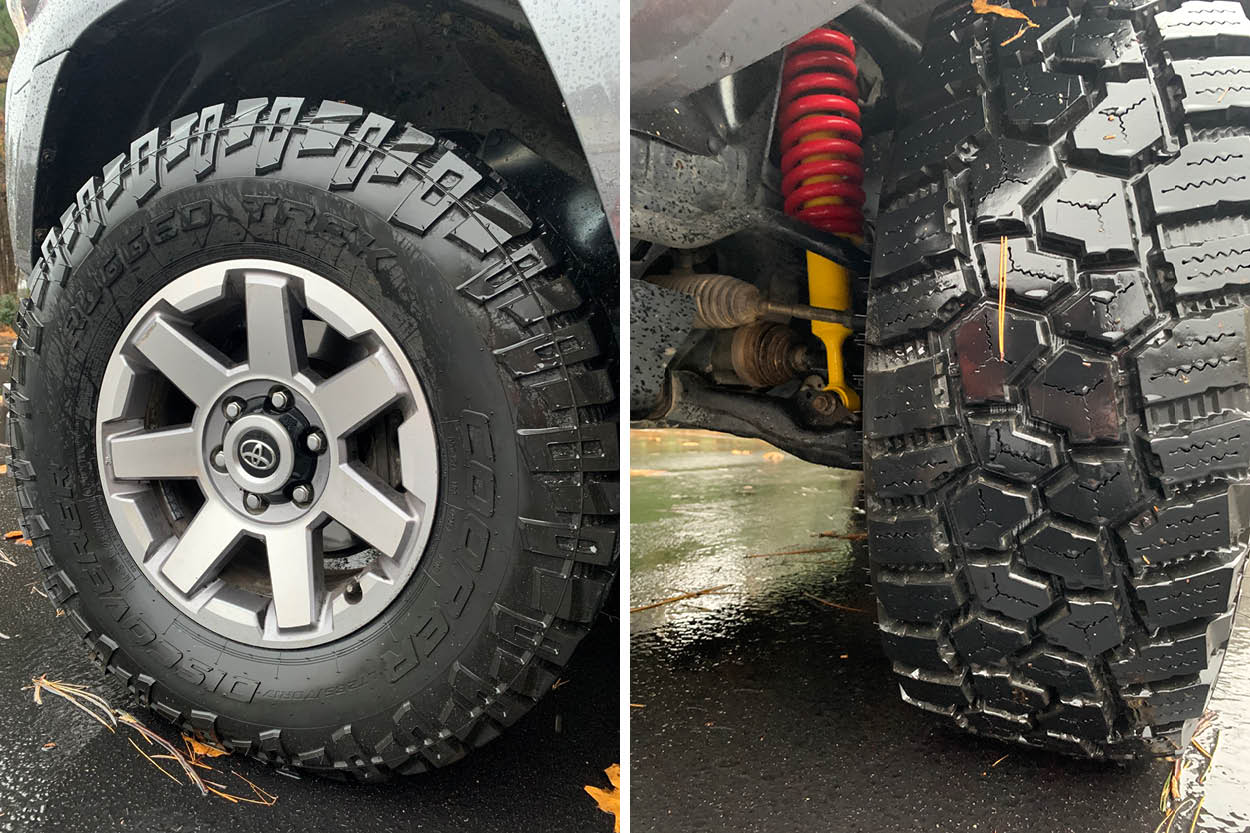 When I had KO2’s I noticed slipping in wet conditions almost immediately after installing them, on a hill, on a flat turn, etc. I could easily get the tires to break loose. I was excited to try these in the same conditions. I can’t get them to break loose.

Cooper has done a great job with their siping to expel the water from between the treads. These tires seem very planted on wet pavement, from slow speeds all the way up to interstate speeds. Obviously, they’re an AT, not a dedicated road tire, so they incur a little hydroplaning, but nothing that seems unsafe. 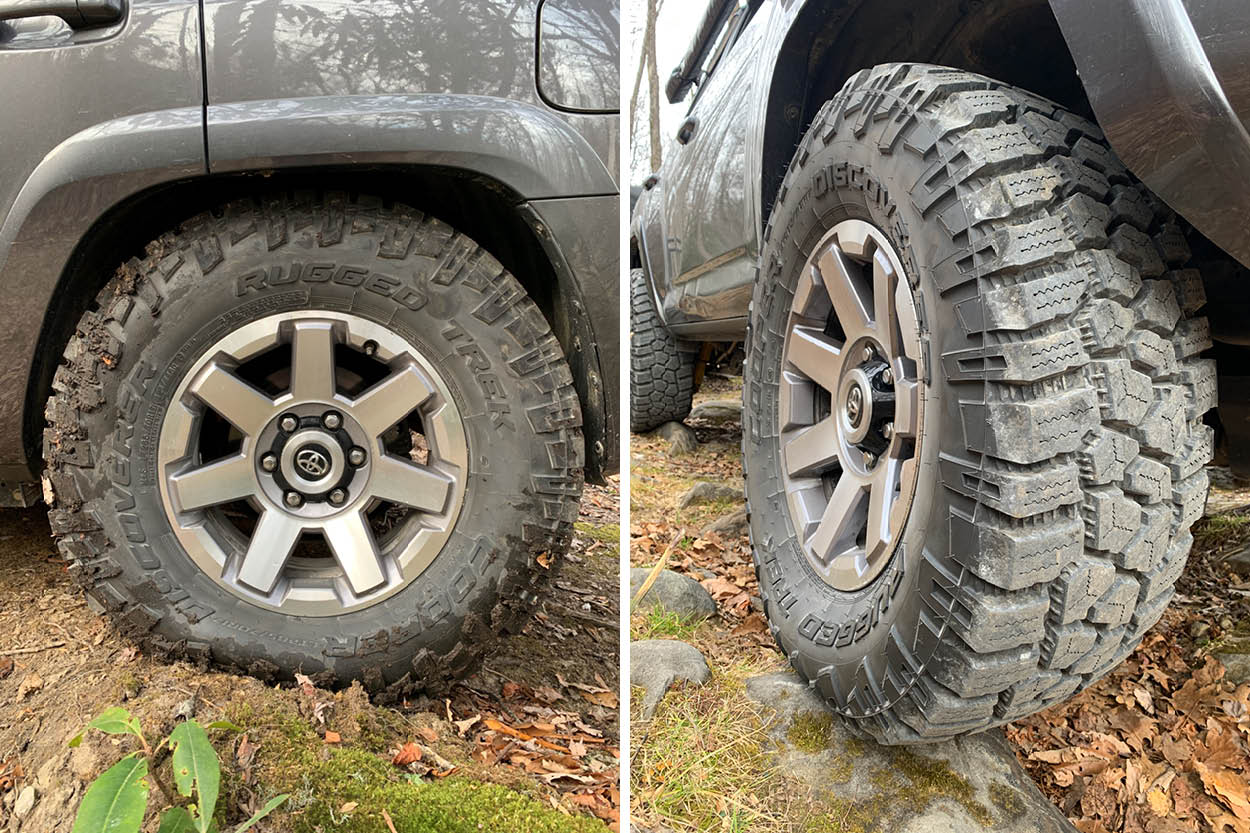 Aired down to about 20psi, these tires stuck to the gravel forest service roads like it was pavement. I also had the opportunity to pull a small trailer as well and they performed flawlessly, there was no wondering or harshness to the ride, the tires felt planted and in control. Leaving the gravel and engaging 4×4, these tires continued to shine.

The tire conformed nicely to the rocks and the aggressive sidewalls kept them from just sliding off of anything they touched. They handled small to medium size rocks and roots, uneven terrain, and loose dirt with ease. My testing was limited, but for the short amount of time I’ve been running them, these tires have been impressive. 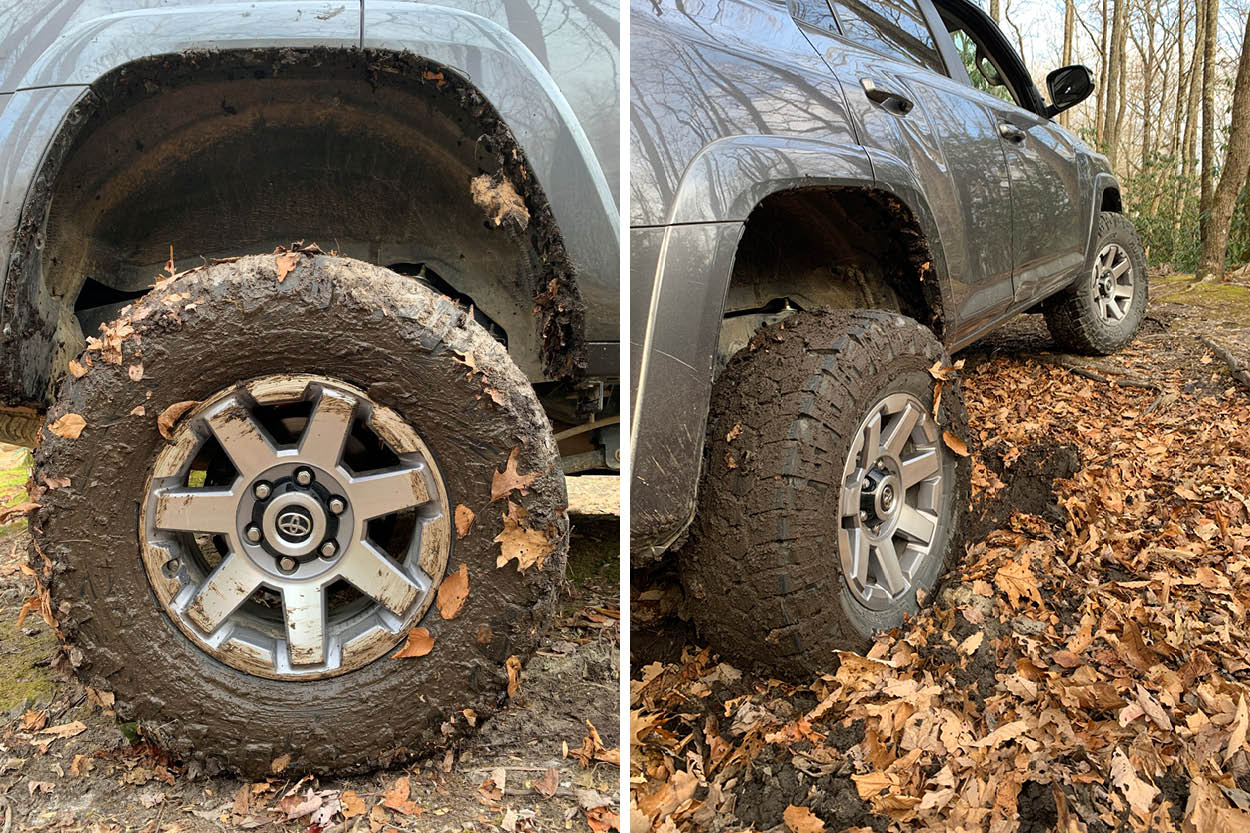 This isn’t a dedicated Mud Terrain tire, but I was able to test them a little in the two types of North Carolina mud we have; slimy, stinky brown mud, and slick peanut butter clay. In the former they preformed well. They were able to gain and maintain traction, and the lugs cleared extremely well. In the latter, it was like driving on an ice rink.

Although I didn’t have a great testing ground, and didn’t have a Mud Terrain to compare to, I do feel that the increase in tread depth and space between lugs help these tires to perform better in mud than a traditional AT tire. If I were to be driving in a lot of mud often, I would look to a MT, but for the performance, and the benefits gained in other ways, this fits my needs perfectly. 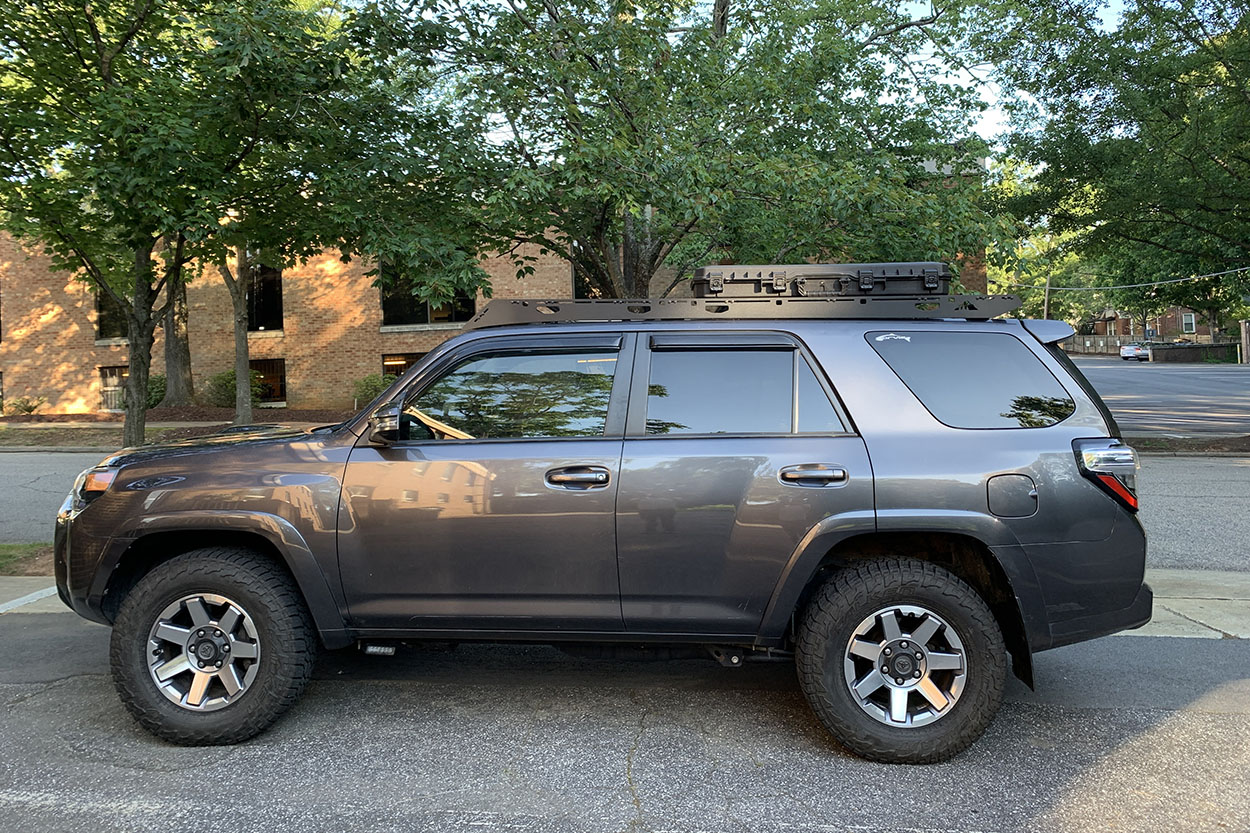 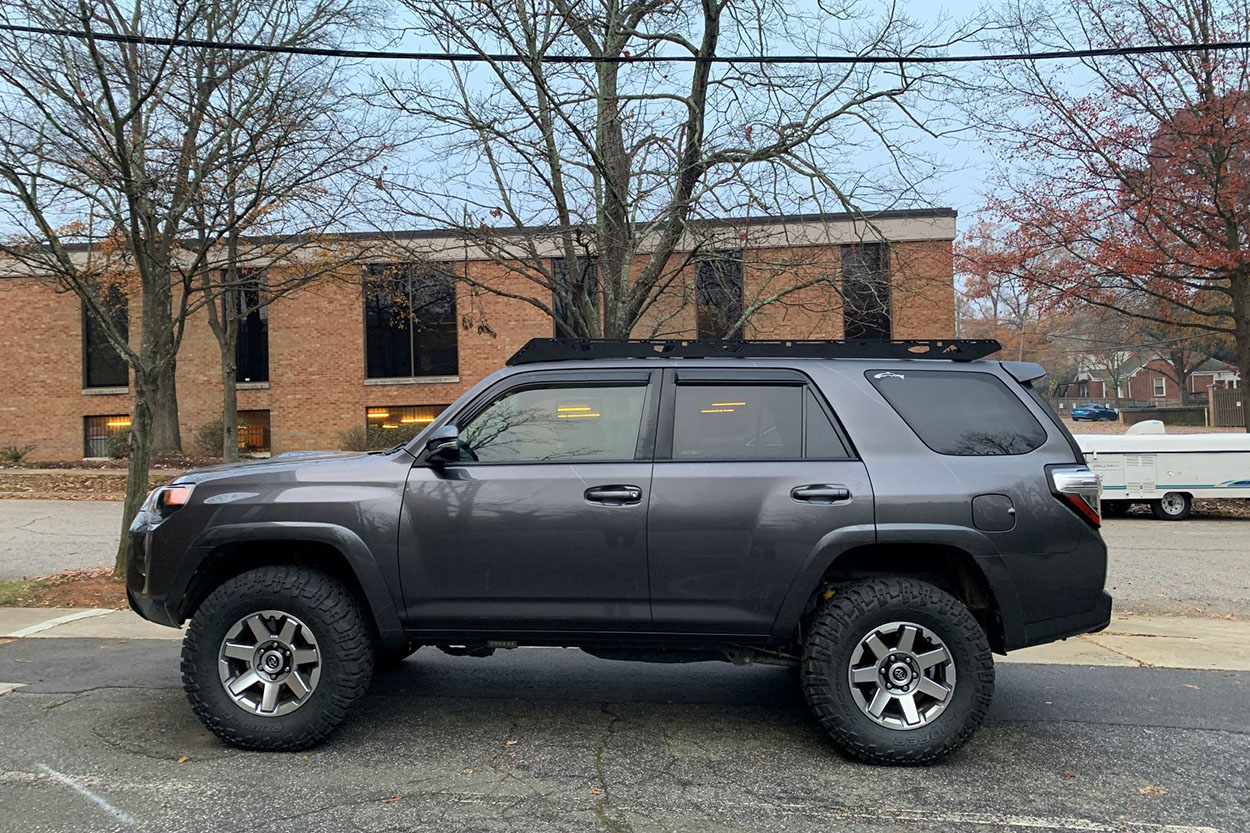 Previously I thought the Falken Wildpeaks had an aggressive tread and looked pretty beefy, but after looking at the Rugged Trek’s, there is no comparison. Obviously, the increase to 285’s helps, but these tires look good!

Albeit an initial impressions review, so far I have nothing but good things to say about these tires. If you acknowledge the repercussions that come with an E-rated tire weighing 58 pounds, then all the rest is positive from me. Out of the multitude of tires that were on my list, I am happy that I settled on these and finally committed. I hope to see more of these on 4runners in the future; if for no other reason than to break of the sea of Wildpeaks and KO2s.

Would I recommend them?

Absolutely. I would recommend these tires to anyone looking to run an aggressive AT without wanting to commit to an MT. They nicely fit the bill between the two and behave well on road for a daily driver as well. Time will tell on longevity, but if they are anything like the Coopers I have had in the past, this will be a tire I keep coming back to.

Your setup seems similar, and you wrote that you needed extensive trimming and a BMC. Various other articles suggest no need for trimming/BMC with AT 33”.

Any more info on your experience would be incredibly appreciated. Thanks!

I know I responded to you via email, but I wanted to give a brief response here for others benefit:

Trimming / fitment / rubbing has a lot to do with wheel offset, exact tire, alignment, and general use (off-roading vs road driving). Generally speaking you will at least need to trim your front bumper / inside wheel well to fit 33s, but a BMC is dependent on the above factors mentioned, primarily wheel offset. The further your wheels / tires sit outside the wheel well (negative offset), the greater your turn arc and higher potential to rub places.

With the above in mind, I took the safe route and had a BMC, but after having it done, and running 1.25″ spacers, I 100% would have rubbed without a BMC and front fender trimming.