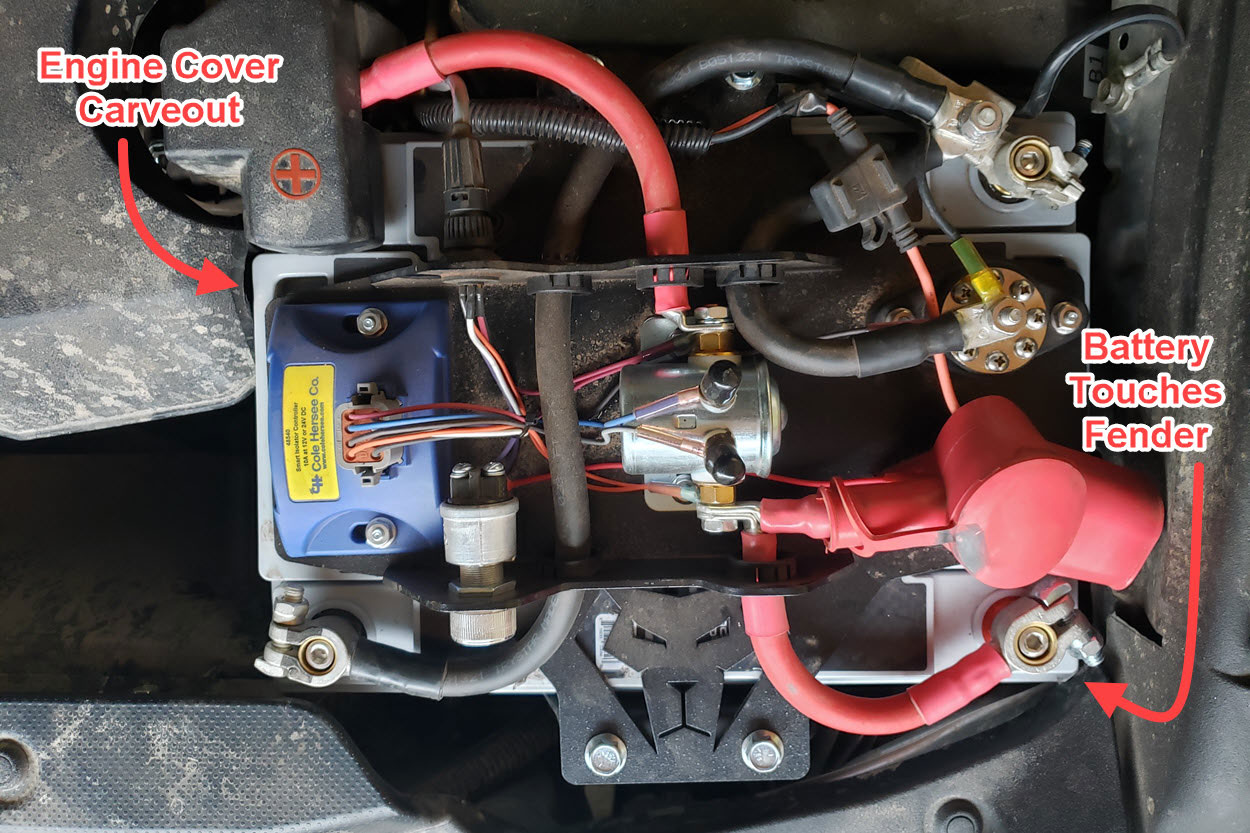 To give a little background about myself, I’m an amateur photographer who travels to relatively remote areas. Before retiring, these trips entailed a flight, a rental car, and then a road trip to my destination. I’d buy a cooler upon arrival, stock it with ice and food, and keep replenishing ice during the trip. Finding ice and draining melted water was a nuisance, but the biggest issue was that food sitting atop the ice was never cold enough.

After my recent retirement, I purchased a 2019 4Runner TRD Off-Road Premium with KDSS (I had to travel from New England to Chicago to get the model/color I wanted, but that’s a different story). I made some basic upgrades to my suspension and lighting. I also bought an ARB 50qt fridge/freezer. But, how was I going to power the fridge? This article describes my real-world experience in the field with two different power solutions for the fridge.

I was not eager to install anything permanently and after reading articles on this site about various battery configurations. So, I purchased the Lion Off-Grid Camping Package including a Lithium NMC battery and solar panel. I found that the battery and charging brick could sit atop the passenger-side wheel well beside the fridge where it could plug into the rear 110v receptacle. Testing at home showed that the battery could easily run the fridge for more than 24-hours, but the battery then required a few hours to fully recharge. 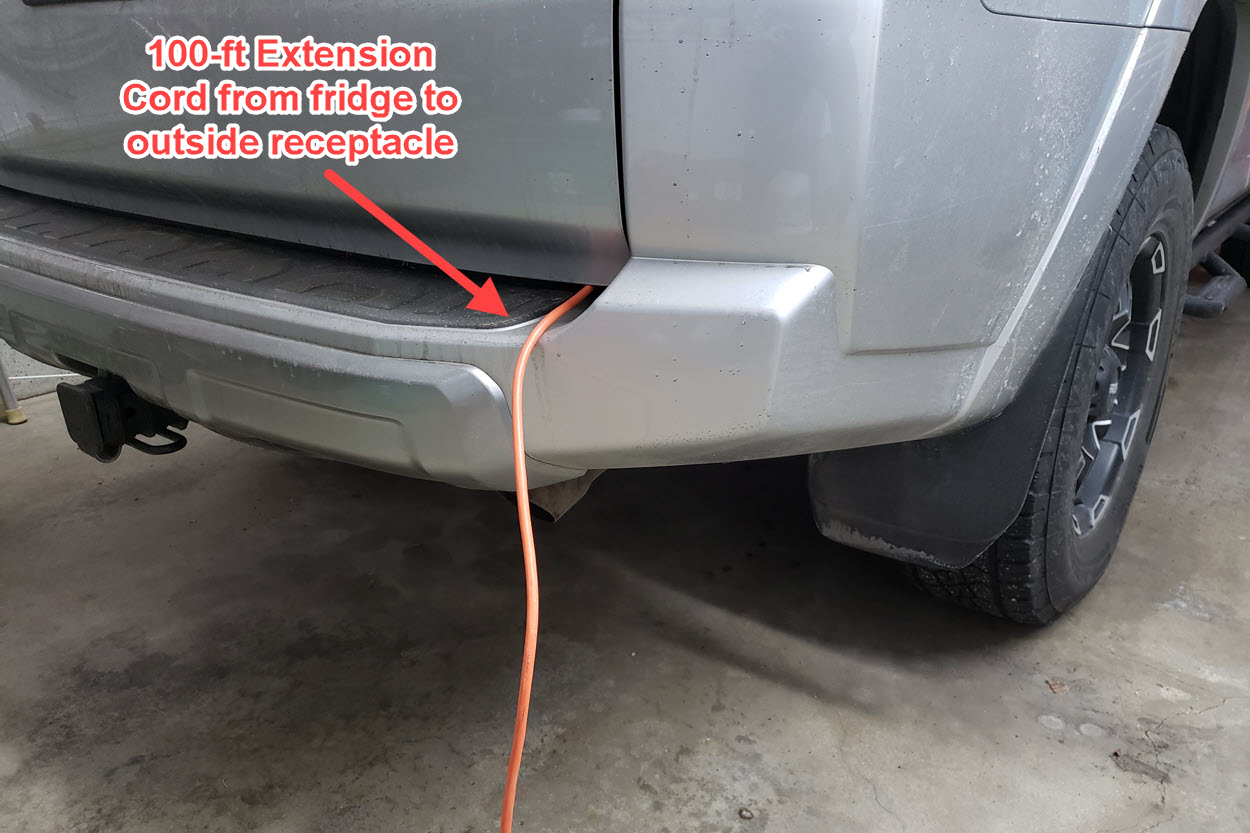 The Lion Safari LT battery performed well, keeping the fridge running as expected. However, there were some convenience issues: 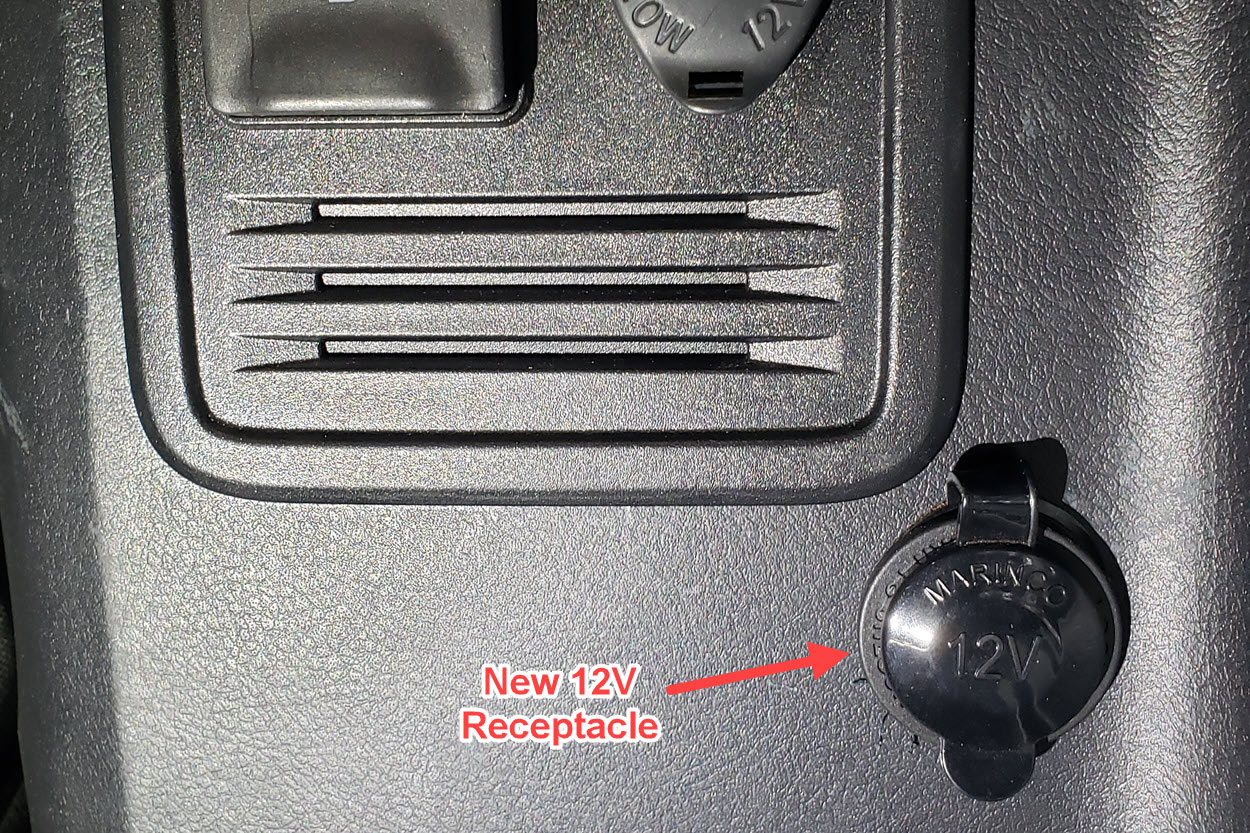 Deciding that this situation was untenable in the longer term, I researched other solutions. I settled on the Genesis Offroad Dual Battery Kit. The kit included two (2) Full River batteries, a 12V power outlet, and the “G Screen” for remote monitoring. 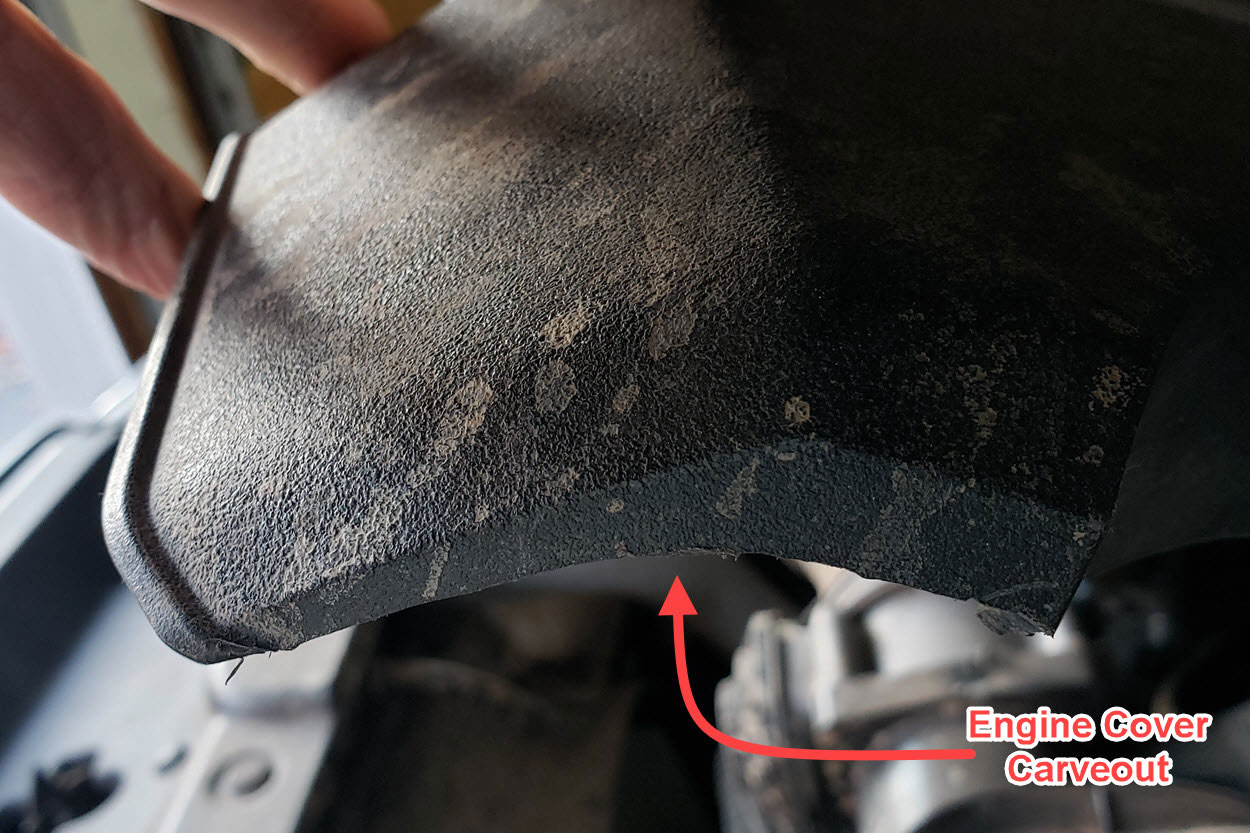 Installation of the dual battery kit was more challenging than described by the instructions and installation video. While it doesn’t make sense to repeat the install instructions here, below are a few things to consider when installing this setup: 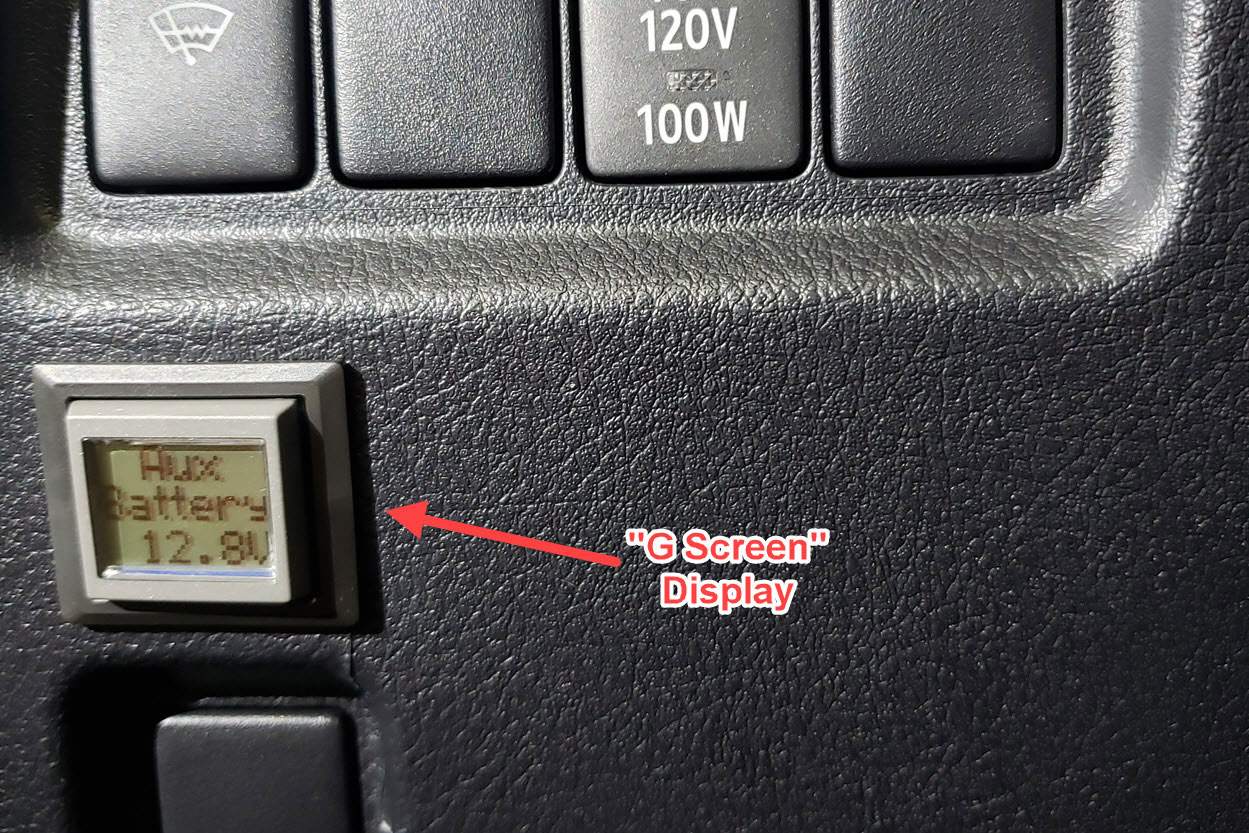 So how was the performance of the dual battery kit in the field? In a word, astonishing. In a pre-trip test, I ran the fridge with the new batteries for 24-hours, then drove the truck and checked the “G Screen” at regular intervals to see when it indicated full charge for the auxiliary battery. I was astonished when it turned green after just 5-minutes. I found a place to stop safely and checked the voltage with the engine turned off. Sure enough, the auxiliary battery was already at full charge.

During a four-week trip in October, I found that the “G Screen” turned green very quickly. Early in the trip, I would drive out of a car park and proceed a couple of blocks to the first traffic light, check the G Screen, and find that it was already green. The performance of this solution is nothing short of amazing.

There was only one issue with the dual battery setup on the trip; the tray loosened and rattled on dirt roads or off-road. Once I determined that the ever-louder rattle was the battery tray, I decided to leave it until the end of the trip. Upon return, I disassembled everything and discovered that all four bolts holding the tray had loosened. I don’t know whether the “nutserts” were not tightened enough or the bolts simply vibrated loose. I re-tightened the four (4) bolts and everything seems secure now. We’ll see what happens on rough terrain on the next trip.

For my purposes (everyone’s needs are unique), the Genesis Offroad Dual Battery Kit is by far the superior solution. Because the auxiliary battery charges so quickly, I don’t need to bother with heavy, bulky, solar panels if I’m off the grid for a few days. I can simply run the truck for a few minutes every day. And I no longer have to worry about whether I remembered to switch on the rear 110V receptacle, or whether I’ll be running the truck long enough every day to charge the Lion battery. The space used by the Lion battery is now available for something else.

Now I just need to find someone who could use the Lion Camping Package!

Steve Carter is a retired healthcare executive whose passion is exploring and photographing the natural world. His photos can be seen at carterfoto.com.

I like the concept but having to tweak the A/C hard line is a hard pass. Is moving the A/C line likely to be needed in a ’21 ORP?

I have been using the Genesis product for a year now and have run some tough tracks. Installation was tight for sure but I made it work with less effort than you describe. Running power to the rear of the truck was simplified by searching Youtube for guidance. It looks OEM! My only challenge is the power consumption of my fridge. Yes, it is BIG. a 75 liter Dual Zone Dometic unit. I require ice in the field for my evening cocktail. (I’m a camper not a savage.) The Genesis keeps it powered through most of the night but the battery protector shuts it down causing morning temps to rise to 40 degree in fridge and about 37 degree in freezer. A quick idle in the morning solves the issue and every thing remains as it should – Cool food and Cold Ice with no melt. I love my Genesis but I am getting a dedicated power block for the fridge reserving the Genesis for all other auxiliary needs.

If you’re running the Genesis kit, I’d assume you’re using dual AGM batteries. I’d check the voltage that the batteries require to properly charge. Been down this rabbit hole for a while and the more I dig the more I’m finding that our alternators aren’t designed to fully operate any sort of AGM battery set-up reliably. What I mean by that is, the alternator doesn’t put out the correct voltage at idle to fully charge an AGM battery (depending on said battery’s voltage requirement). I’d look into grabbing a voltage booster and seeing if you don’t make it further into the night after having properly charged the AGM battery to its full capacity on your drive up.

I’m gearing up for the genesis off-road dual battery install, but I’m also going to grab the DC Power Inc 270 AMP Alternator (bumps idle voltage to 14.8) as well as do a big 3 upgrade, possibly big 7 kit by JeepCables/ToyotaCables.com.

Again, I’d highly suggest looking into your voltage at idle, and cross-referencing that with what your AGM batteries require.

I just installed Genesis system two days ago. So far so good. Installation was actually not too bad. I had trouble moving the fuse box up, but with a lot of pushing and loosening of other wires, I was able to get it to move. Otherwise I was able to get everything done fairly quickly.

Oddly enough, cutting the g screen cutout was the worst part as I cut it too small and had to continually shave it down to have it fit. That part took me a lot longer than I thought.

The Genesis System has been on my list for a while now. This is a great write-up and makes the decision even easier. Nice!

Nice write-up! Thanks for the illustrations.