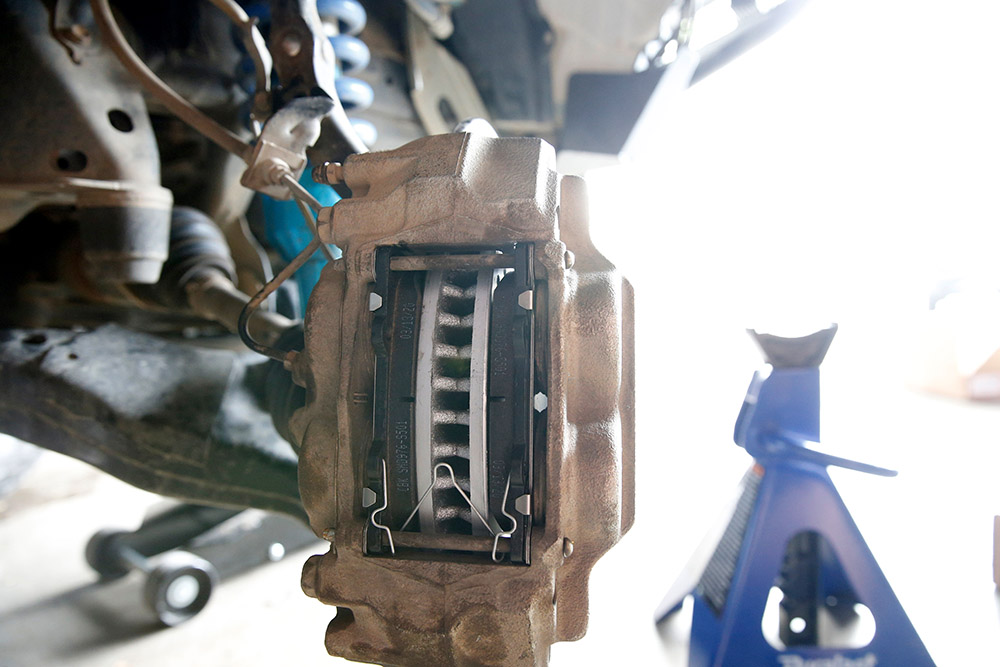 When it comes to large heavy SUVs like the 5th Gen 4Runner, nothing is more important than braking. That task becomes harder and harder as you begin to add weight from skid plates, steel bumpers, rooftop tents, and other options on the market. Throw in off-roading at extreme angles and those brakes can feel quite squishy real quick. Thankfully, Remmen Brakes has the perfect solution for all that heavyweight and off-roading.

Who is Remmen Brakes?

Remmen Brakes is a company based out of Ontario, Canada, and provides braking solutions for everyone from racing cars to emergency vehicles. They have been in the business for years and have been proven to perform.

With all of my bumpers, skid plates, along with my typical camping gear for a weekend trip, I estimate I have roughly 1,300 lbs of added weight. While the stock brakes were able to handle this, I could tell they struggled because I would get vibration on steep declines.

Typically this means you have warped rotors or something wrong, but even after changing the brakes, it immediately did it again. The only answer I could come up with was that the brakes were overheating and, after installing the new brake pads and rotors, it was clear that was the case. 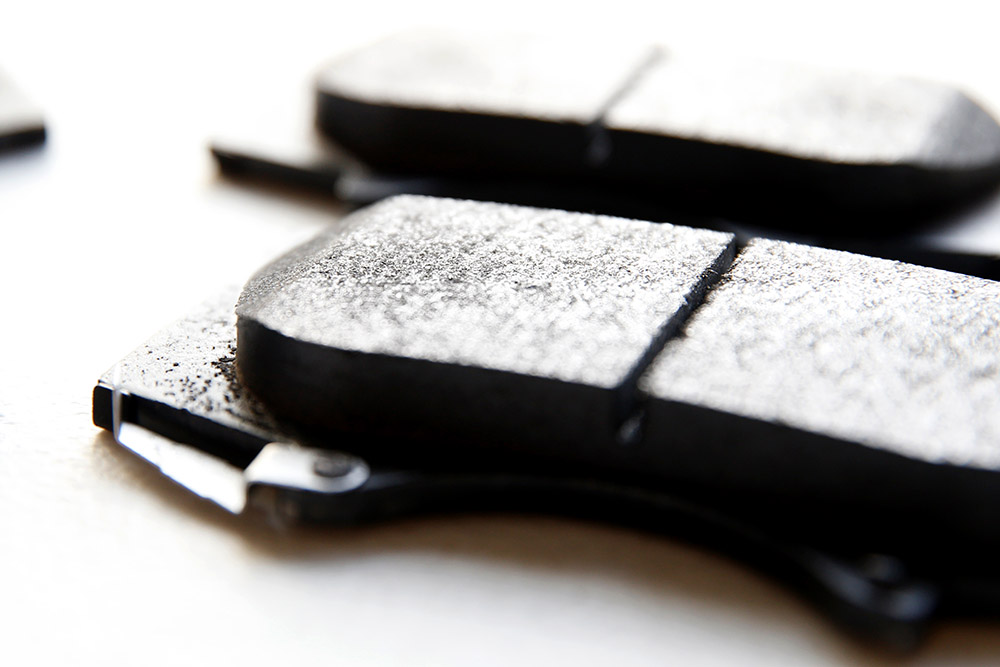 Remmen Brakes offers two kits for the 5th Gen Toyota 4Runner. The BA400 and the RK205. These are two options you can choose from, but depending on your vehicle’s upgrades and driving style may determine which option to go with.

The BA400 is their Bathurst series brake kit. This is a ceramic compound brake that is for your daily driven 4Runner. This would be most comparable to your standard brake kit, however, they are lower in the dust when braking, and have a lot more bite. These are a perfect option for those of you who spend the majority of your time daily driving on pavement.

The RK205 is their Rockies kit. This is a much more heavy-duty brake made up of more of a metallic compound. This can result in more dust being produced while braking, as well as a bit of noise while the brakes are cold. However, the bite of the brake can not be unnoticed, as it is by far more aggressive, making it perfect for the off-roader.

Remmen officially recommends the RK205 for the 5th Gen 4Runner as the braking is by far more superb. While the BA400 certainly is a safe option, if you have added weight and off-road frequently, the RK205 is your best option according to them. 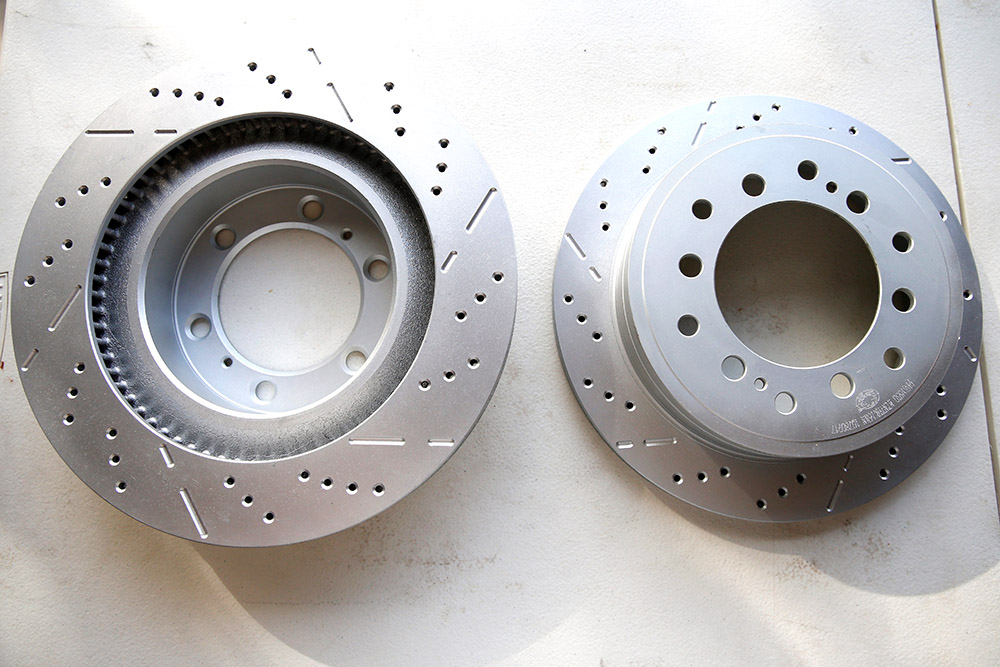 One thing you’ll notice right away between the stock rotors and Remmen rotors is that they are cross-drilled and slotted. OEM Toyota rotors are 100% flat, meaning they are unable to get rid of debris on the brake pads, but they also heat up quicker.

The rotors are GEOMET coated. This means rust will not be an issue for the rotors as is the case with many factory and factory replacement options on the market. If you go through water crossings, live in areas that receive precipitin frequently, this is a perfect replacement for those rusty results.

The benefits of drilled and slotted rotors.

With the drilled holes in the Remmen rotors, you are able to have better cooling abilities. That means less heat, resulting in fewer chances of the rotors become warped, which typically is the reason you will feel shaking in your 4Runner steering wheel when braking.

Additionally, the slots in the rotors allow for debris to be pushed away from the rotor. For most of our cases, that would be dust on the trail. One of my major gripes with the OEM style rotors is that when going through dirty powder they would always squeak. That has not been the case with the Remmen brakes.

One of my favorite features is the tight tolerance the rotors have with the brake pads. This allows for a much better contact point when braking, but also increased resistance to fade. That means you can expect these rotors to last much longer than your traditional stock ones, but also give you a much better braking connection between the pad and rotor when and where you need it.

Each is sold in pairs, meaning you only need one set for the rear and one set for the front. They are side specific so keep that in mind, but each box lets you know what side they are intended for. 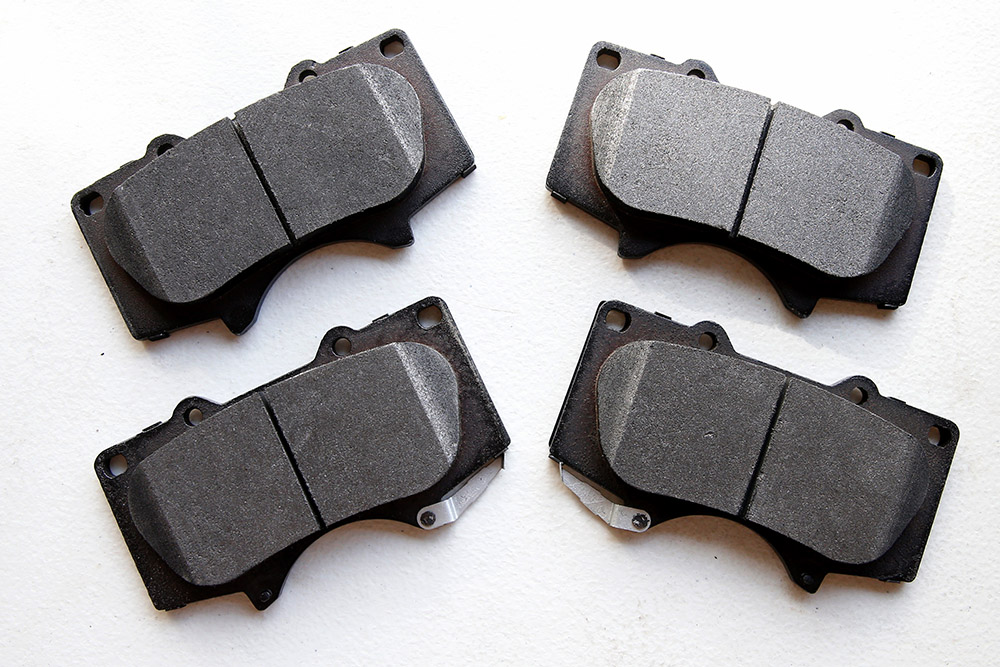 Obviously, you want a good rotor with your brake pads, but the brake pads are just as important. With the Rockies kit, you have a brake pad that can handle the need to slow down in a quick and fast manner. The pads are also designed to specifically wear evenly. When they aren’t wearing evenly they can also give the feeling of warped rotors.

The Rockies pads were designed to work with ambulances in the Canadian Rockies, where steep terrains are a constant issue with the weight they carry. In California, the Sierra Nevada mountain range is equally comparable with some very steep grades. Sonora Pass for instance in places has a 26% grade and will put your vehicle to the test.

Whether in California, Canada, or other sections of the United States, you can trust these brakes to handle whatever you throw at them. They were in fact designed for ambulances, as well as users towing trailers and boats. 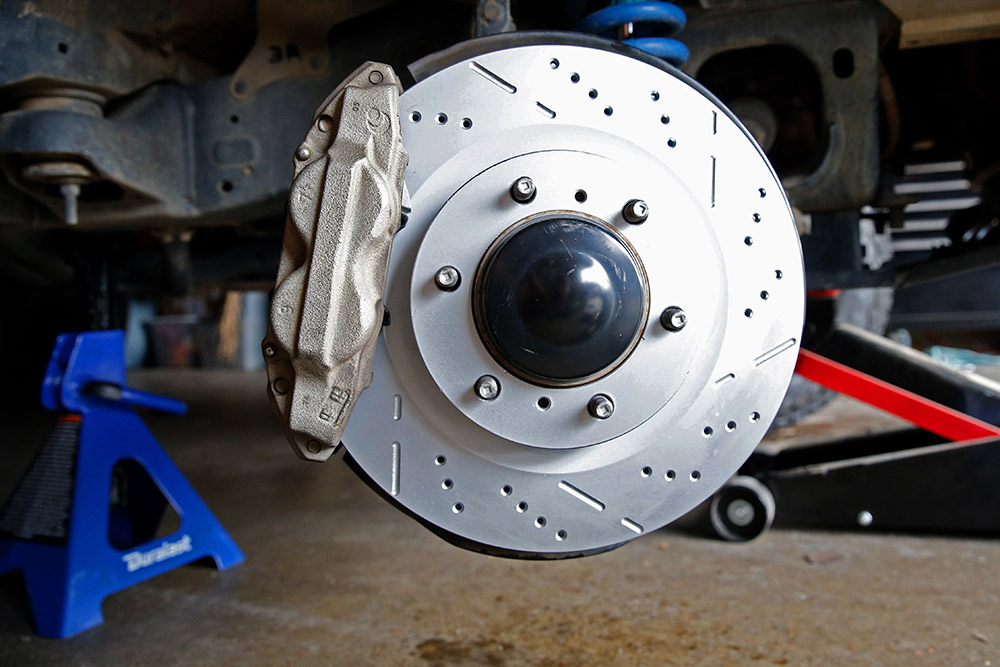 Installing the rotors and brakes was as simple as could be. They are no different than your typical brake and rotor change with factory parts. No special drilling, cutting, or anything of that nature is necessary with these brakes.

The front set of brake pads comes with new locking clips for the pins, as well as the lower spring. While these pieces can be reused if there are no signs of wear, it’s wise to replace them as they come with the brakes anyways, and new hardware is always better than used.

If you have never changed brakes on a 5th Gen 4Runner it’s a rather simple process and an easy way to build up confidence in doing work on your vehicle. This was my first time doing a complete brake change, and the hardest part was getting out bolts that didn’t want to be removed. Easy enough to do with some PB Blaster and a breaker bar.

If you need a step-by-step process on how to change brakes go ahead and give this article on brake replacement a look. Keep in mind to check on torque settings for your vehicle. Earlier 5th Gen 4Runner’s required different torque specs for the front brakes. 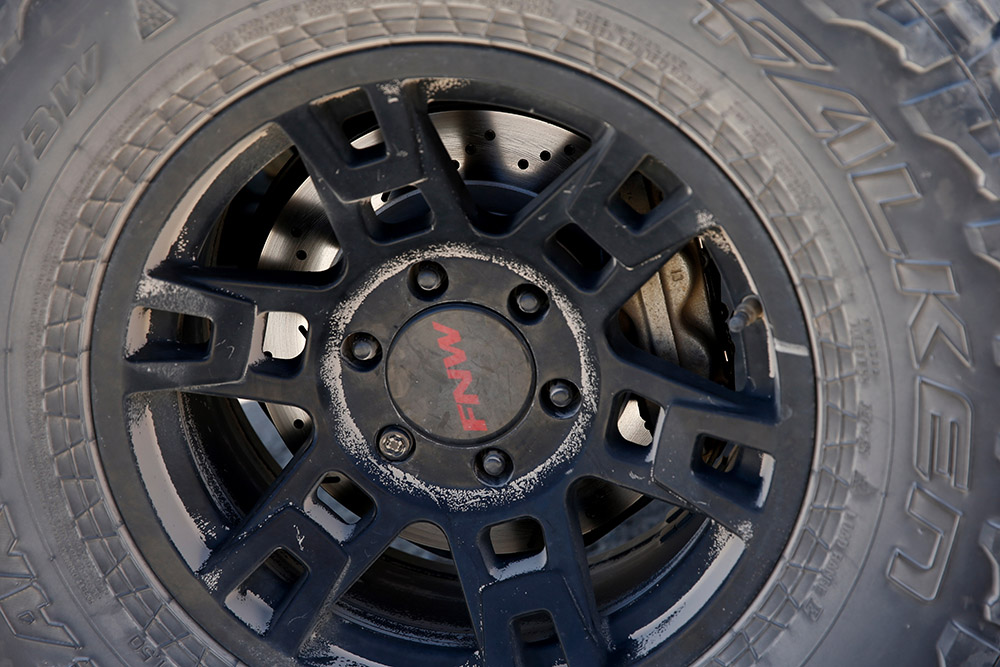 It’s important to break your brakes in, this is called “bedding” for the official people out there. This allows the brakes and rotors to essentially make grooves in each other for contact points. I have to admit I wasn’t fully aware of this until a buddy pointed it out to me. It requires doing some heavy braking from 40 mph to 0 mph, as well as 60 mph to 30 mph, and back up. This is needed to be done numerous times.

If you don’t do this, your brakes will feel slow and delayed until it breaks in overtime. Not recommended, especially being if you have to panic stop you might not stop as soon.

You may also want to take the time to bleed your brakes at this point. With over 70,000 miles and extending brake lines in the rear, I decided this probably should be done. While there was some air in the lines, it wasn’t a drastic amount, but if you are off-roading or have done extended lines without a brake fluid change, you likely have some air in the lines as well. 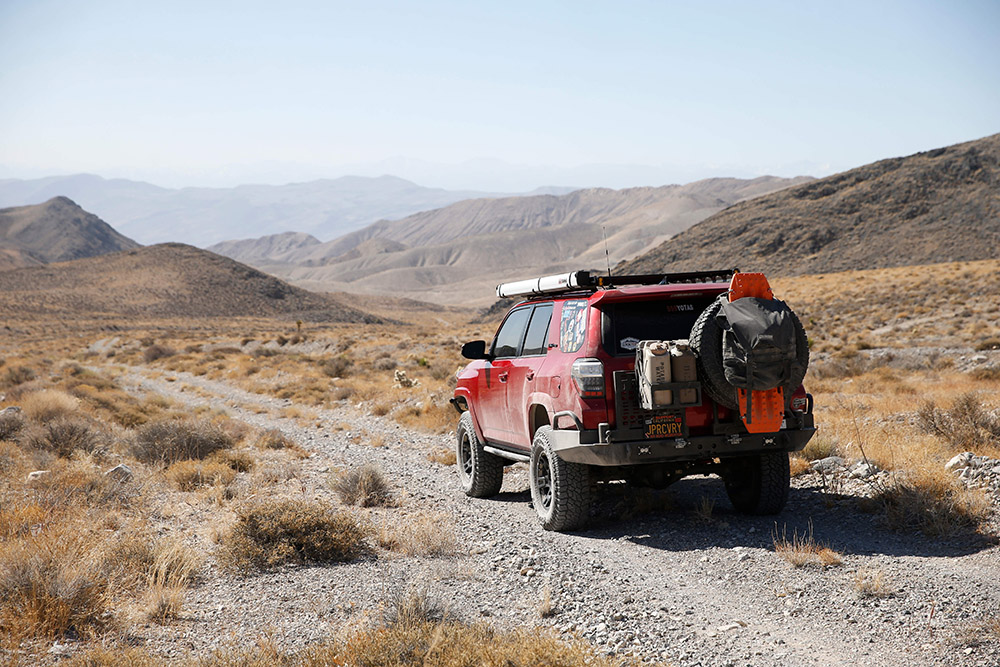 When I went to Death Valley National Park, I knew I would hit some steep grades. Both on and off-road I experienced massive drops into valleys and saw the hardest of them all on Towne Pass, a 9% grade over 16 miles. Needless to say, this area tests your brakes. In the past, my 4Runner would shake pretty hard on this spot, and after dealing with a snowstorm in it I decided I needed to get new brakes.

This time, I did exactly what I would do the previous times. Lock the 4Runner in 3rd and let it coast the entire way down the mountain. Even if the brakes can handle the stopping, there’s no need to ride them and diminish their life.

This time, when needing to brake, I had zero shakes. The vehicle slowed as it was supposed to and continued to do well the entire way down. There is one stretch of the 190 within Towne Pass that requires you to stay on the brakes for a bit, even while locked in 3rd gear. If there was one place it would have shook it would’ve been there, and it didn’t!

On the dirt grades, I had similar experiences, except one that was even better. No squeaking! With the old OEM brake pads and rotors, I would always have some sort of squeaking happening. It was immediately obvious that the brake compound mixed with the drilled and slotted rotors made the difference. 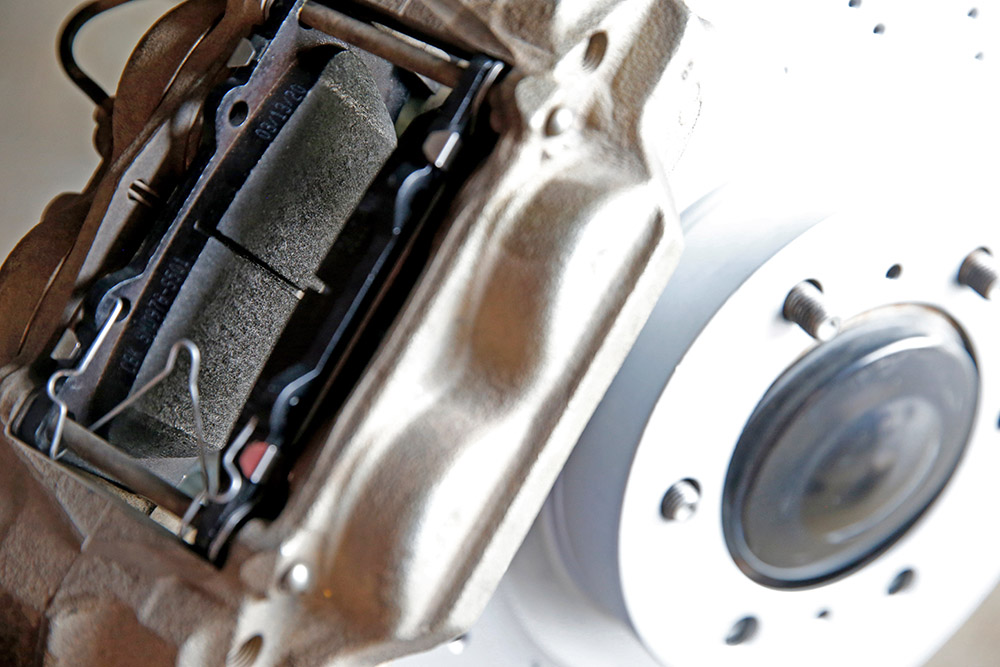 Not only do the Remmen brakes and rotors give you peace of mind while using them, but they also give you the feeling of safety that you might have felt you were missing or didn’t have. Obviously adding fresh brake fluid in the mix is a bonus, but even without it, I could tell the difference immediately.

Between my last time in Death Valley and this past week, I had added on roughly 500 lbs of extra weight and the rotors and brakes handled everything flawlessly compared to factory.

If you are like me and have a lot of added weight to your 5th Gen 4Runner and are looking for superior braking quality, you should consider Remmen Brakes as your first option. They have so far proven to be exceptional in both city driving, highway driving, but more importantly, in off-road driving where I spend the majority of my time.

I wish I would have found Remmen Brakes the first go-around instead of buying factory brakes for a second time which had proven to already be a concern.

Thanks for the overview. I’m looking for new 4Runner pads soon and looking for options on the best product for off road application. Just a few thoughts on rotors and pads based on almost 10 years of high performance driving experience (HPDE).
Pad material can have a big impact on stopping power. As you stated, better ‘bite’ come at a small cost (albeit not too dramatic for a 4Runner) of extra dust and noise.
However, I’d say rotors have little to do with ‘stopping power’, as they are consumable discs of iron. Bigger rotors can help a bit at dispersing heat. Fancy rotors such as two-piece with lightweight hats ($$) or carbon fiber ($$$$), reduce rotating mass and have better heat properties…again, probably not a huge issue for a 4Runner (I doubt anyone even makes 2-piece or CF unless its for competition use).
But I will say that drilled rotors are only for appearance and have zero impact on stopping. They cannot be ‘turned’/machined. The drill holes create weak spots when under stress/heat and increase the possibility of premature cracks. Slotted rotors do help scrub off dust and debris, so there is some benefit. At the end of the day, blank rotors, occasionally machined are a better value. But if you like the sportier look of drilled/slotted they will perform fine, but there are some trade offs to be aware of.

What this gentleman has stated above has been proven, redundancy, true on every point. He can absolutely be trusted. As a 80 year old Physicist and much more, I research everything in extreme detail and depth.