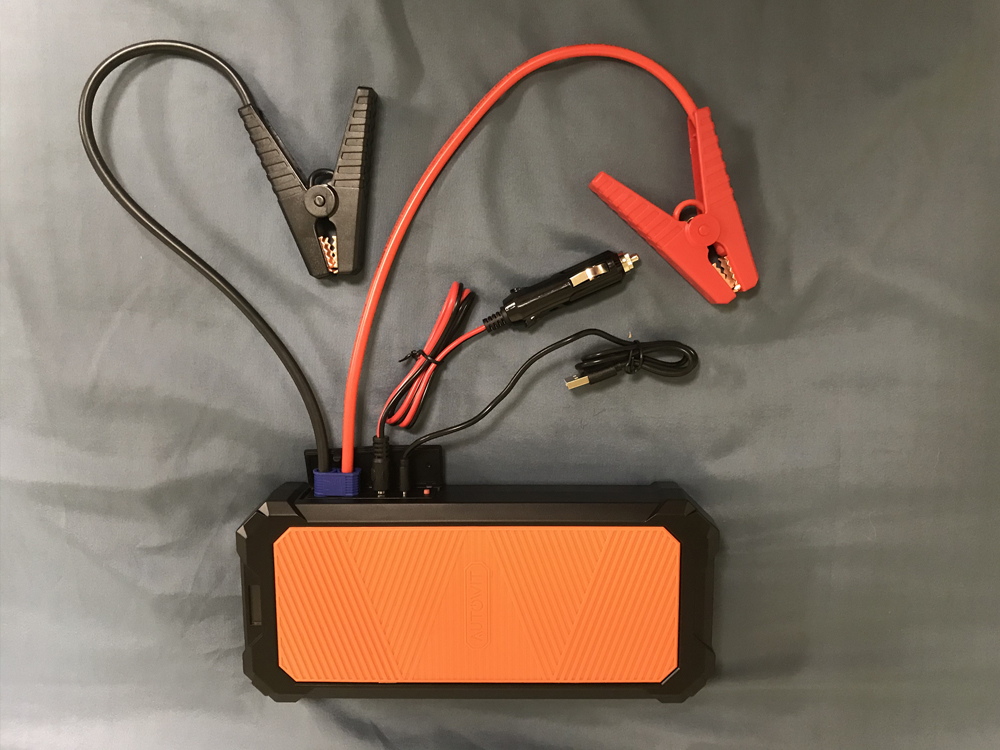 Car batteries seem to go dead at the most inconvenient times.

When the weather is bad, when you are already running late for an appointment, or when you are in the middle of a fun vacation. Having a dead battery stinks.

I was able to test the SuperCap 2 and see it in action to determine if the many positive reviews about it are true. Keep reading to see what the experience was all about.

What Exactly Is It? 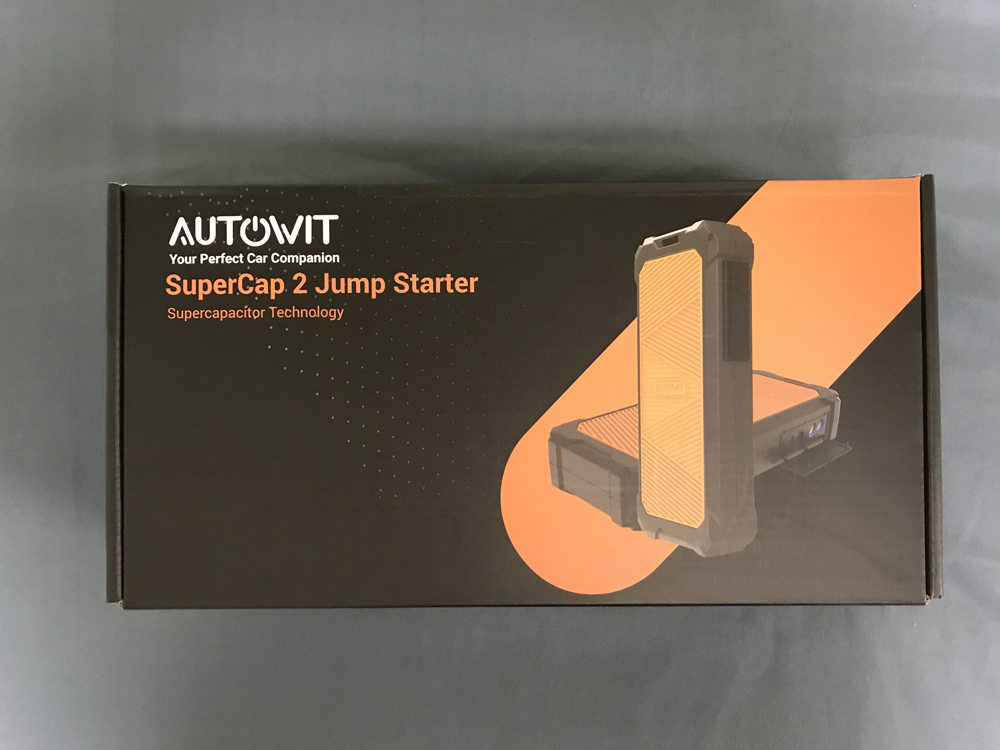 The SuperCap 2 is a portable jump box with one difference from the jump boxes you may be familiar with.

The SuperCap 2 doesn’t use a battery, instead, it uses a large capacitor to store the energy it needs to jump-start your vehicle. Why is this important? Capacitors can discharge electricity at a much faster rate than a battery because the potential energy is stored in an electric field instead of in chemical form like a battery.

When it comes to jump-starting your vehicle, you could use a small battery box and wait for it to transfer its energy to your dead battery. But what if your battery has an internal problem? What if it won’t take a charge at all. If this is the case, the engine will require all its power (current) from whatever you are using to start it.

If you are using a battery backup, you probably won’t be able to draw enough power to get the engine to rapidly crank and start. If, on the other hand, you use a capacitor, you will have its full potential energy at your disposal that the starter needs to turn over the engine.

Why Not Just Use Jumper Cables?

I have always kept a set of quality jumper cables in my vehicle. You may be reading this and wonder why I would use the SuperCap 2 over a set of simple jumper cables.

Well here are a few examples:

I could list more examples, but you get the idea. This device gives you the ability to take power from a USB outlet, a 110V outlet, a small 12-volt system, etc., and charge the SuperCap 2 to build up enough stored energy that can then be connected to your vehicle to jump-start it.  Unlike traditional jumper cable, you don’t have to have another vehicle around in order to provide the power.

The compact size of the SuperCap 2 makes it easy to stash away in your truck or tool bag. In fact, it tucks away nicely in the compartment or tray in the back of the 4Runner, ready to use.

Every type of cable needed to charge the SuperCap 2 is included, such as:

The cables all attach to their respective plugs which are found under a rubberized dust cover on the side of the device. The cables give you the option of charging the SuperCap 2 from several different power sources. All the cables seem well made and the SuperCap 2, itself, is a solid piece, not overly heavy at only 2.5 lbs., but it feels solid and has a well-built case.

How To Use The SuperCap 2

Using the SuperCap 2 is very easy. To begin, it needs to be charged. Remember, this is a capacitor and not a battery so you cannot just leave it charged in your car and have it ready for use. The capacitor will slowly drain over time. In my own testing, it dropped from 100% to 30% in about 3 days.

To charge the SuperCap 2, you can use any of the included adapters. The estimated times to charge are printed in the manual and range from 3 to 30 minutes. Obviously, connecting the SuperCap 2 to another automotive battery with a running engine and charging alternator will feed it the most power and will charge it the fastest. But if another car isn’t around and you have USB power, then you have that option as well. This can be very handy if you are by yourself at a hotel, cabin, or campground and no one is around. Or if you are carrying a battery system like the Lion Energy Safari LT Power Station.

The digital display shows you the voltage and charging capacity percentage. If anything is attached incorrectly or anything is wrong, the display will show a warning callout. The display also guides you through the jumpstart process. These callouts are referenced on the back of the SuperCap 2 to guide you if you have a problem. 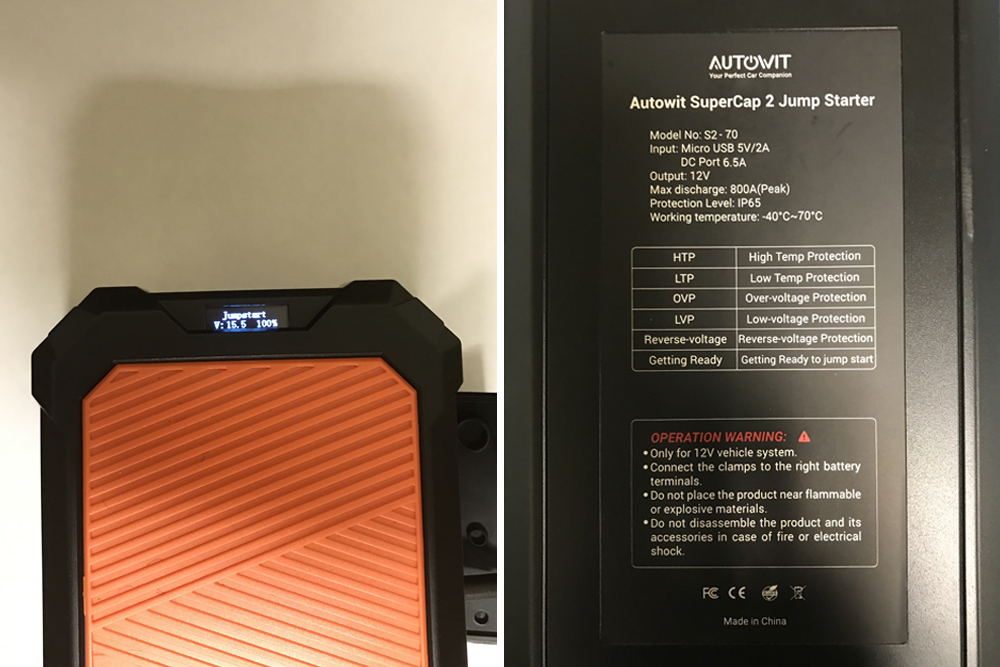 Once the SuperCap 2 reaches 100%, it’s ready to use. Simply disconnect the cable from the power source you are using and connect the alligator clip style battery connectors to the positive and negative side of your dead battery.

Once it’s connected, push the red charge button on the side of the SuperCap 2. Once this is pressed, the device does a 10-second audible count down. These 10 seconds allow you time to get in the vehicle and prepare to start it. Once the countdown is complete, the SuperCap 2 emits a loud audible beep as it discharges to your dead battery.

After the beep, you can turn the key and start your vehicle. With the vehicle on, simply disconnect the battery connectors and pack the SuperCap 2 and its cables back into its case. That’s all there is to it.

Time to Test it Out

I received the SuperCap 2 and immediately hooked it up to a standard 5v, 0.15A USB adapter you get with a cell phone or tablet. Immediately the screen came on to tell me it was charging at 4.7 volts and showed 12%. I left the SuperCap 2 plugged in to charge to 100%. The literature with SuperCap 2 says this should take 30 minutes. The charge percentage ticked up steady for 42 minutes when the SuperCap 2 reached 90% charge and then it slowed to a crawl. It took another 20 minutes to get to 100% for a total of just over an hour. I was a little disappointed in seeing this but at 0.15 amps output, I can see that 30 minutes was a little optimistic.

I packed the SuperCap back into its case and into my truck. A few days later, I made the drive over to where I had a small Ford Escape that I have been working on for my daughter. This Escape has been sitting up most of 2020 and the battery is flat dead and attempts to charge it has failed. It has a 3.0 V6 which will require a decent amount of power to turn over.

Opening the door to the Escape, the dome lights were very dim and yellow. Turning the key didn’t even make a click from the starter solenoid. It had been 3 days since I charged the SuperCap and it had discharged to 30%. I connected the alligator style connector harness and connected it to my 4Runner’s battery. The SuperCap 2 screen lit up and the percentage charge meter started quickly counting up, getting to 100% in just under 2 minutes. I think their estimate of 3 minutes charge time from a 12v input listed in the manual is accurate. 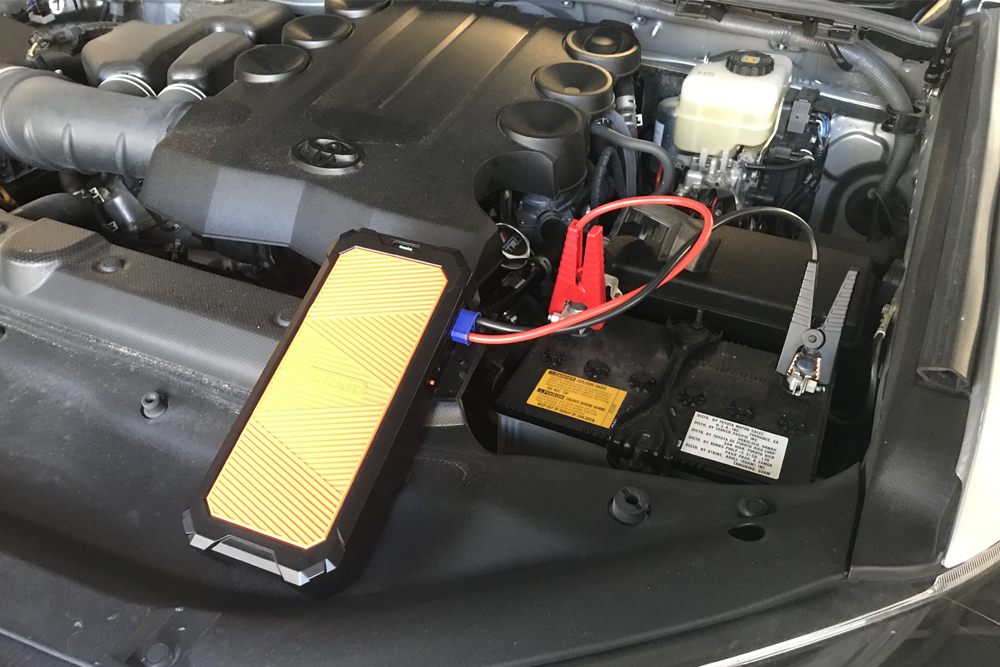 After charging it up, I disconnected it from my 4Runner and walked over to where the Escape was parked.

I connected it to the battery terminals and set the SuperCap 2 on the cowl away from the battery as the directions state. I then hit the red charge button on the SuperCap 2 and the 10 second counter began. I hopped inside the Escape and listened to the countdown.

When it finished, I heard the loud, steady BEEP as the SuperCap 2 began discharging into the Escape’s battery. It was crazy to watch as immediately the dome lights and other courtesy lights lit up to full brightness. I turned the key and the engine spun effortlessly to life. I got out of the Escape and disconnected the SuperCap 2 from the battery. The power meter still showed it had 70% remaining. 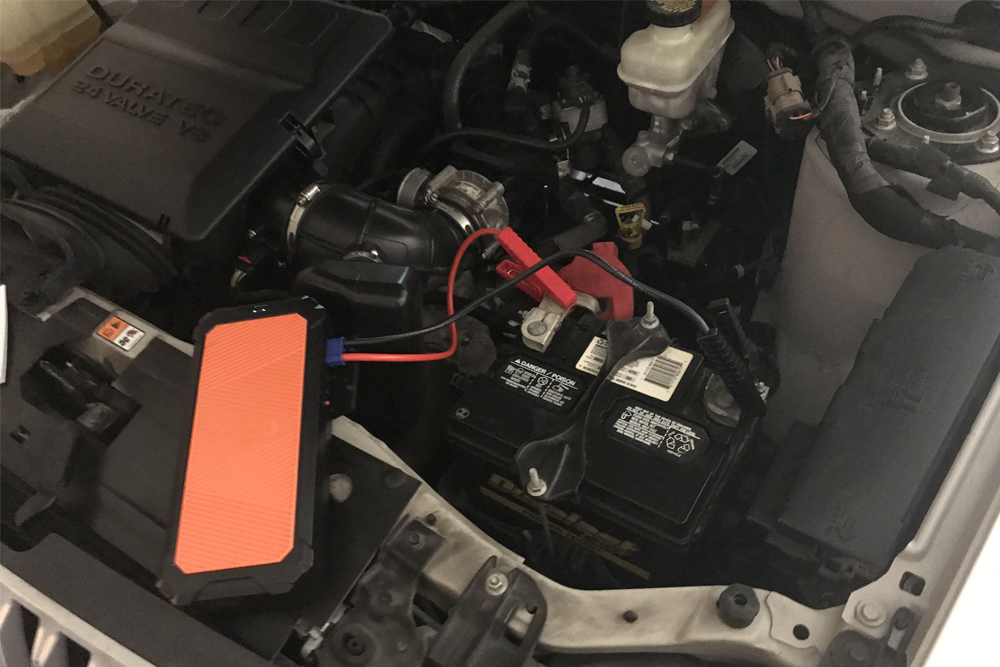 Since I had some capacity left, I wanted to see what else it could do.

There was an old 19 hp riding lawnmower that has also sat unused for years. The battery in it was also completely dead. I connected the SuperCap 2 to the small battery and hit the charge button. When it beeped to signal it was discharging, I attempted to start the lawnmower.

The lawnmower hadn’t been started for a while, so the engine spun and spun and tried to start. It took about 15-20 seconds for it to sputter to life, but it finally did. The SuperCap 2 easily provided power for the starter to spin for that length of time and checking the battery meter showed I had only used up 23% of the capacity.

At this point, I was more than impressed with the output of this little guy. Unfortunately, I had no other dead batteries to test it on. 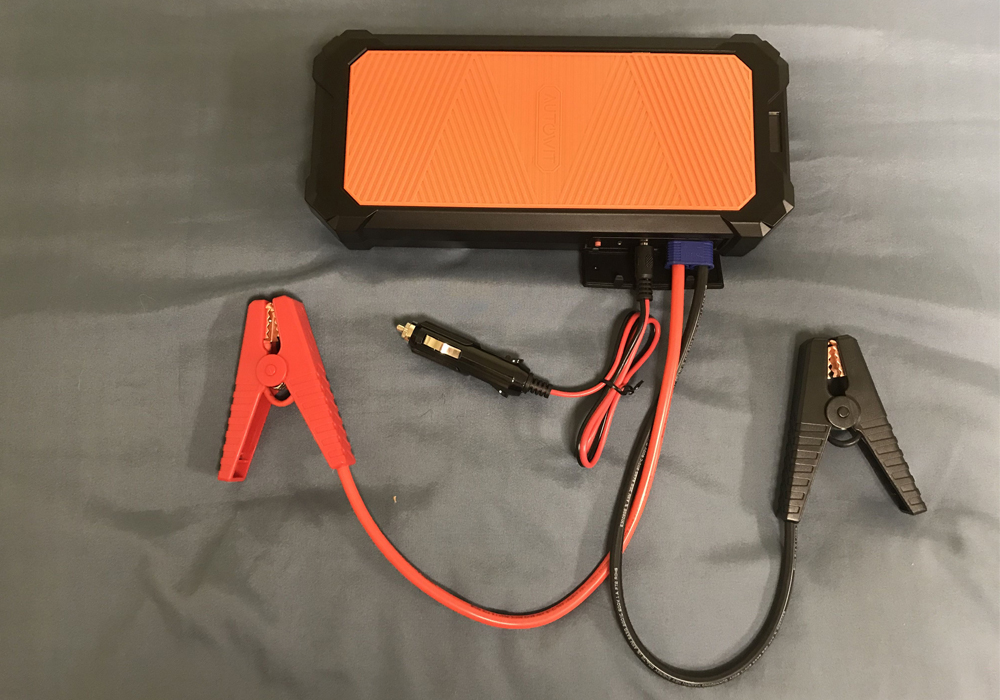 Even though I’ve only had a short amount of time to test out the SuperCap 2 I am very impressed with it and can see it has a replacement for my bulky jumper cables.

Here are my pros and cons:

Overall, I think the SuperCap 2 is a perfect fit for your vehicle’s tool collection. Toss out those bulky cables and replace them with the SuperCap 2. The SuperCap 2 can be purchased here and, as of this writing, there is a 15% off coupon available active.