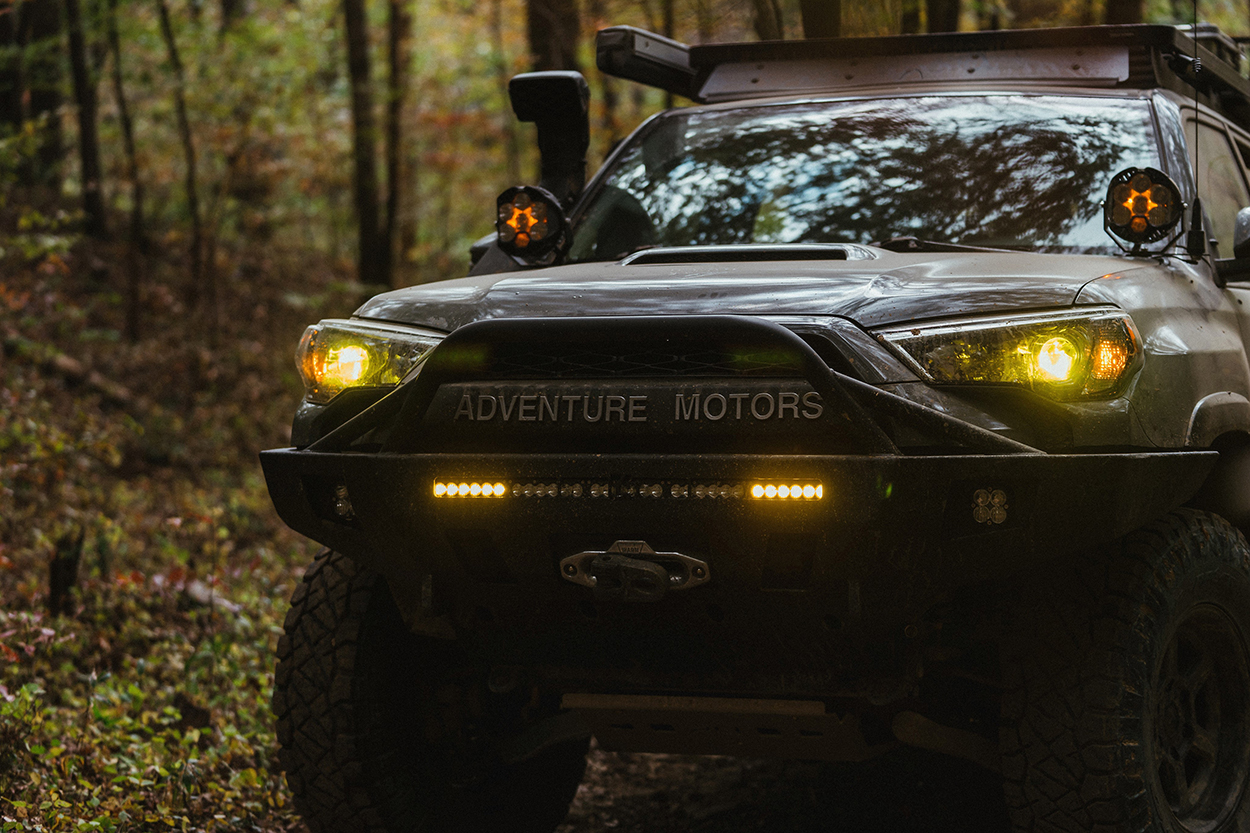 Looking To Buy A Toyota or Lexus 4×4 for Overlanding? Your first phone call should be Adventure Motors!

It’s rare when you meet a company that does so much and at the same time, does it well.

I would call Adventure Motors a two-fold truck outfitter with a hyper-focus on the overland community.

Located in Lee’s Summit, MO – Adventure Motors is a used car dealership; however, it would be more accurate to call them a used off-road/overland Toyota-focused dealership. On top of featuring some pretty epic Toyota’s for sale, they also have a massive 7500 sq. ft shop – where they custom build off-road and overland rigs.

The company was founded and currently run by Michael Fuller who oversees the operations of selling Toyotas and outfitting/building Toyotas on a daily basis.

When I asked Michael whether they were more of a dealership or a build shop; he replied with “Definitely both. I can’t really say we’re one or the other. Our company stands on those two pillars and they definitely support each other”.

Regardless of what you call it, Adventure Motors is one of the only places, if not the only place in the world where you can purchase an overland platform and have it fully built out to your exact specs and travel requirements. This is truly a special place. Michael and his team have really done quite well in building this company into what it is today.

Whether you are looking to have someone build you an overland rig from the ground up or just looking for a really nice used Toyota truck in the midwest, call Adventure Motors.

Before we get into the interview, find Adventure Motors online:

Without any more, let’s jump into it!

How did Adventure Motors Get Started? 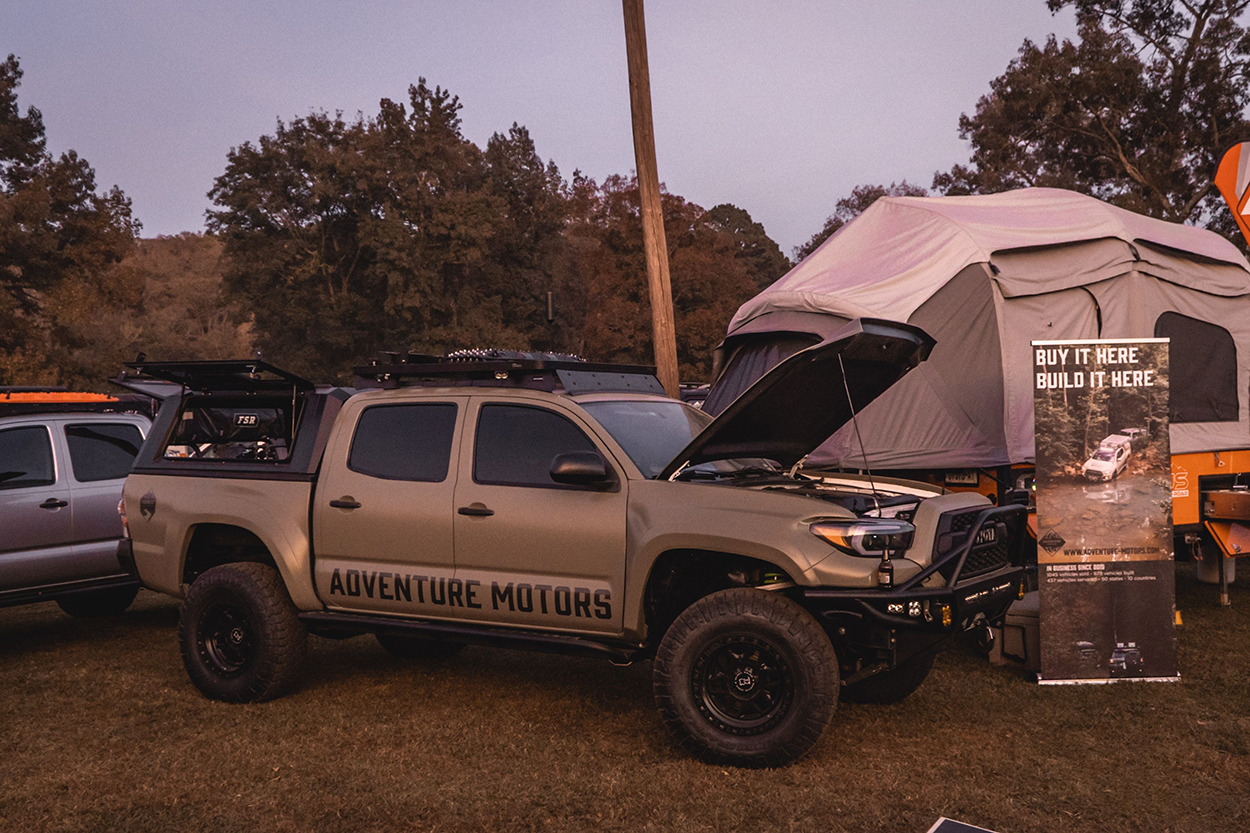 Without sounding dorky, it started out of a passion to see the Toyota/Lexus off-road and overland industry grow. Back in 2014 in the KC area and really the midwest in general, there was no shop focused on providing specialized services for the Toyota/Lexus community.

We had been operating as a dealership selling a vast array of vehicles, however, our passion and experience really was with the Toyota/Lexus platform. On top of that, we were avid travelers and off-road explorers.

After months of thinking about it, the owner said “you know what, let’s completely rebrand the company and just focus on selling Toyota/Lexus 4×4’s and starting a build shop to outfit them.”

The general response was “in Missouri? That will never work!”

Fast forward over five years now and we’ve sold 1068 vehicles, outfitted 886, and serviced 437. On top of that, we have customers now in every single US state (including Alaska and Hawaii) as well as in 10 different countries. Pretty neat!

Your Slogan “Buy It Here, Build It Here” – What does that mean? 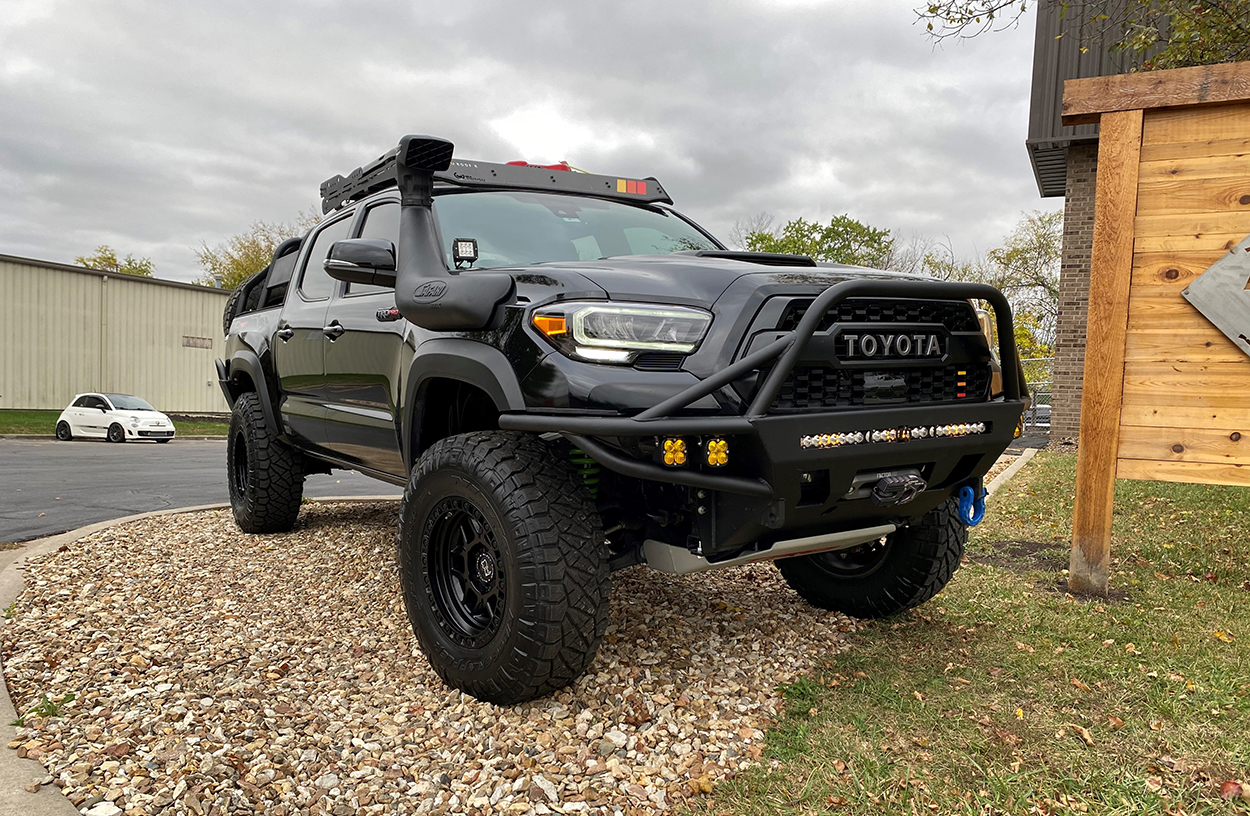 I’ll answer that with a longer slogan and question.

Are you looking to get yourself and/or your family into Overlanding, off-road traveling, or backcountry camping but don’t know where to start?

You can come in and say

Our answer is “done.”

You can buy a rig from us, build your rig with us, and the day you pick it up load up your gear and head on an adventure.

So you Build Cool Trucks… What’s that like on a daily basis? 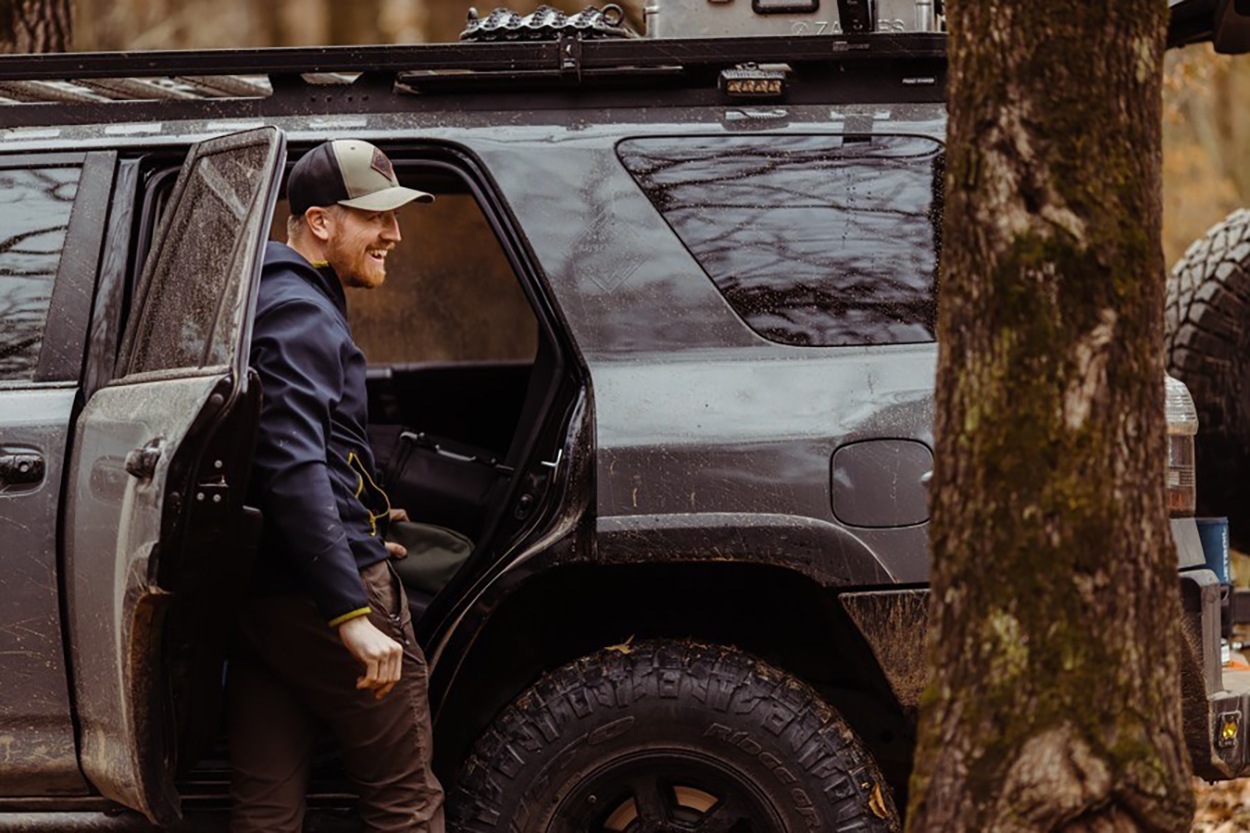 Well, today we’ve got a 2017 Tacoma in the shop getting a Magnuson supercharger installed along with a wheel/tire combo and Iron Man 4×4 front suspension.

We’ve also got a Tundra in getting a Magnuson supercharger installed along with a load of maintenance and repairs done. Next to that, we’ve got a 2016 4Runner getting a 5.29 re-gear, suspension kit, and wheel/tire combo put on.

NEXT to that, we’ve got a 2013 Tacoma getting a re-gear, air locker, nomad valve body, and some maintenance items done.

Last week we did a clutch kit on a fully restored and long travel built ’88 4Runner, did a complete engine re-seal and axle rebuild on an 80 series land cruiser, a few suspension installations, some bumper installs, etc.

The week prior to that we did a bunch of general maintenance on rigs including heater cores, timing belt/water pump jobs, CV axles, brakes, etc.

Some weeks in the shop look like the coolest mods/outfitting you’ve ever seen, other weeks are simpler bolt-on jobs. Regardless of the job, it’s always fun and it’s always a Toyota / Lexus 4×4.

What does your average customer look like? Buyer or Builder? Both? 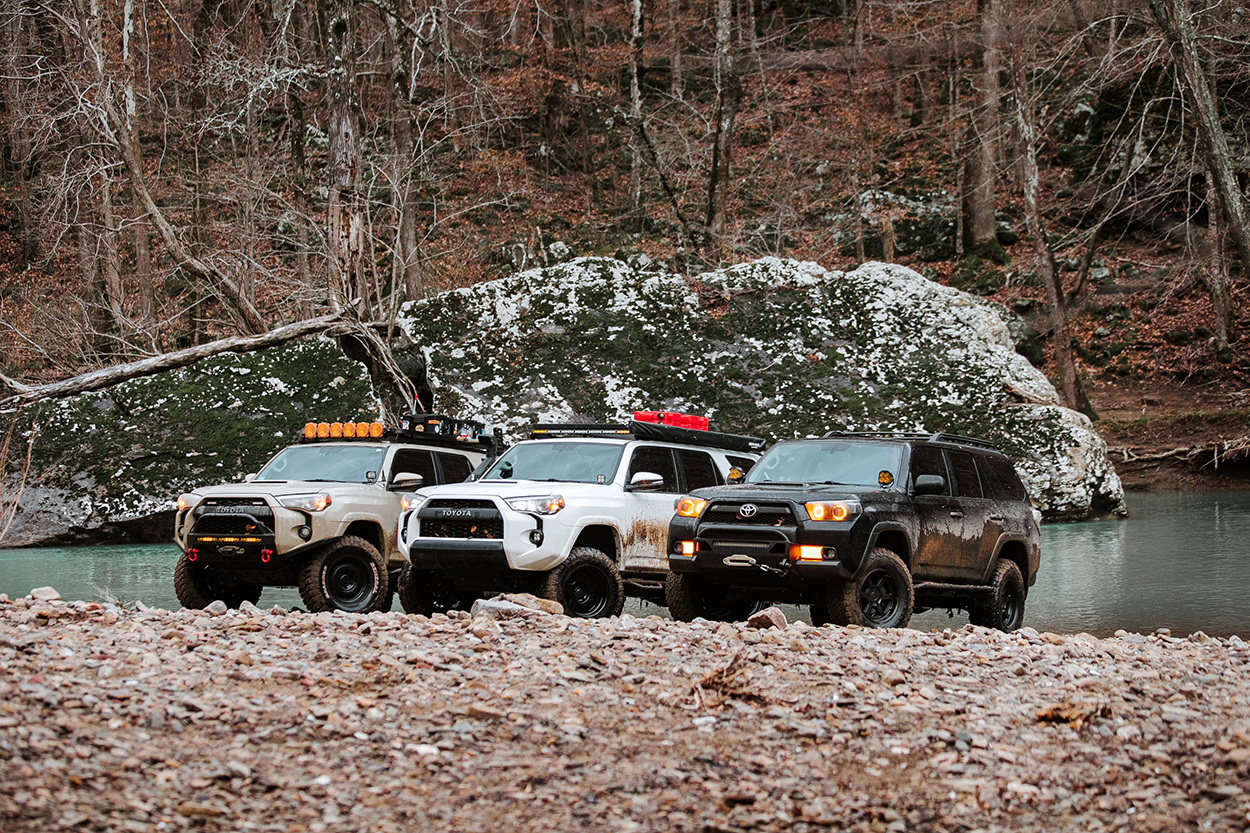 More than half of our shop hours are filled up with customers bringing their vehicles to us and getting outfitted or worked on. The rest of the hours are customers that bought vehicles from our sales department and subsequently having them built out.

How big is your Shop? Any Plans on Growing? 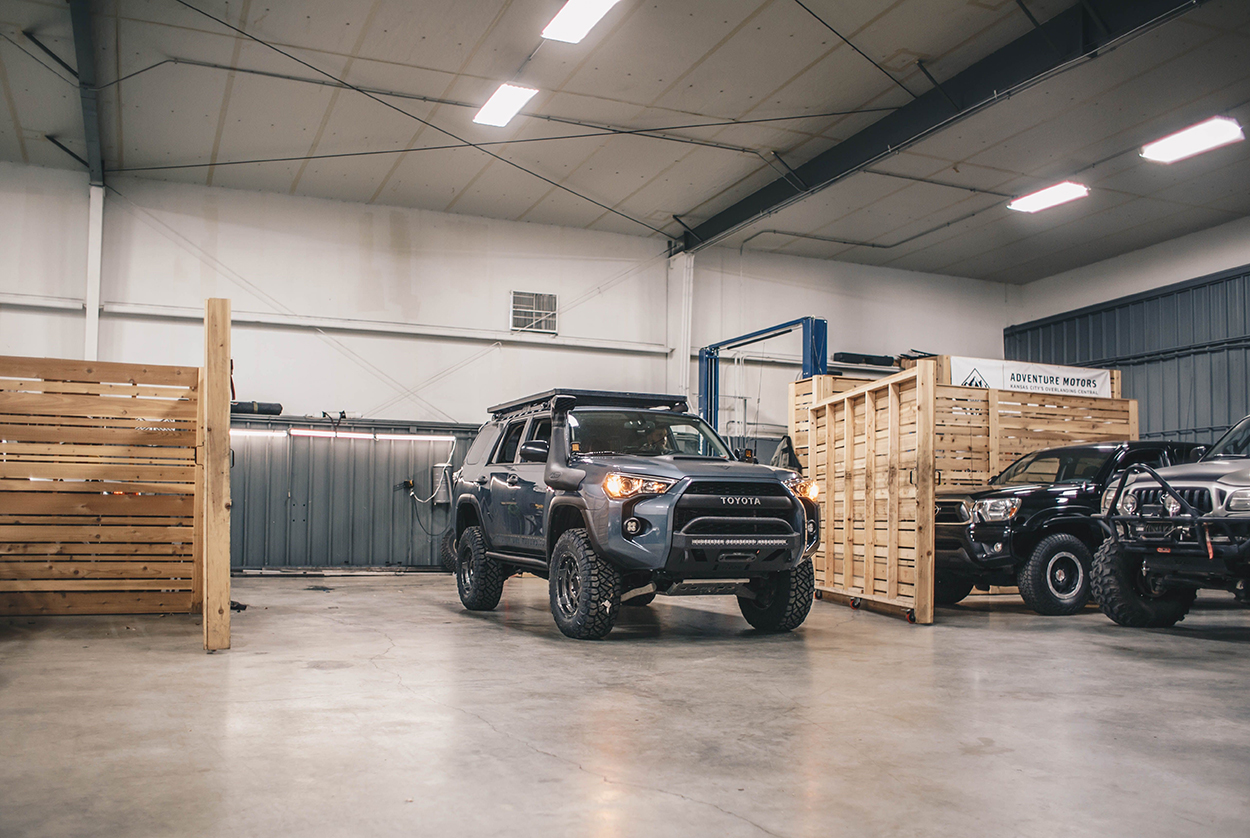 We actually just moved into this facility in August of 2020. Our plans right now are to be in this building for roughly two years and hopefully double that space. It can get a bit cramped at times, however, our old shop was a good bit smaller and we learned over the years to make very efficient use of our space.

What Services Do You Offer? 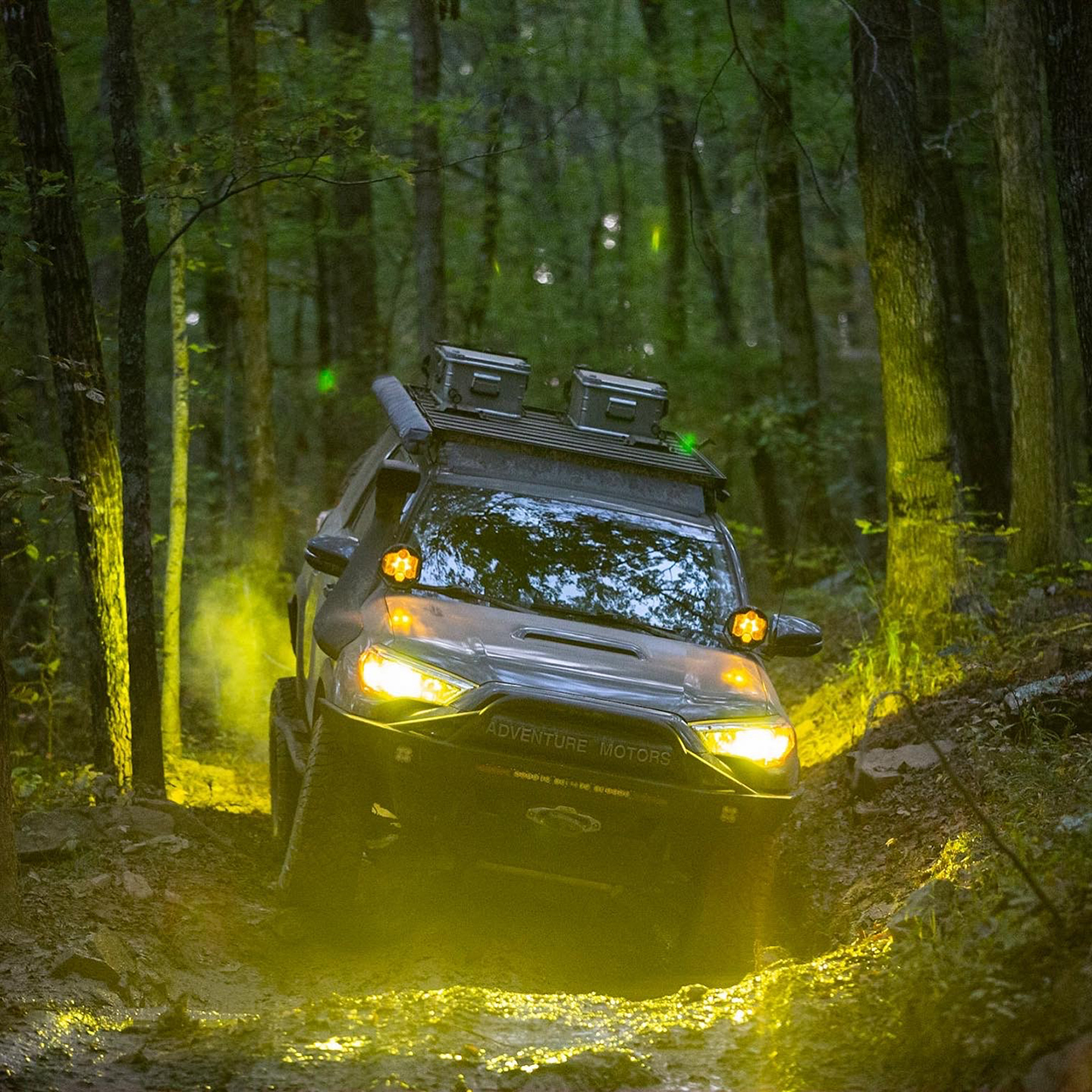 Need a lift kit? Need a 2015 4Runner? We can make it happen. Want a supercharger? We’re your spot.

What Is Your favorite Overland Build Platform and Why?

The 4Runner or the Lexus GX460. They are the most versatile for ALL around use.

Let’s face it, 90% of folks can’t build a vehicle that will have its EXCLUSIVE use as an overland vehicle. It’s got to be a daily driver, grocery-getter, AND overland vehicle. The 4Runner or the GX460 is the BEST vehicle for that application in *my personal opinion*. Other guys in the shop may say the Tacoma, or a 200 series Land Cruiser… However, I have what I think a pretty good argument to say that the 4Runner or the GX460 takes the cake.

What’s the coolest 4Runner you have ever built and Why? 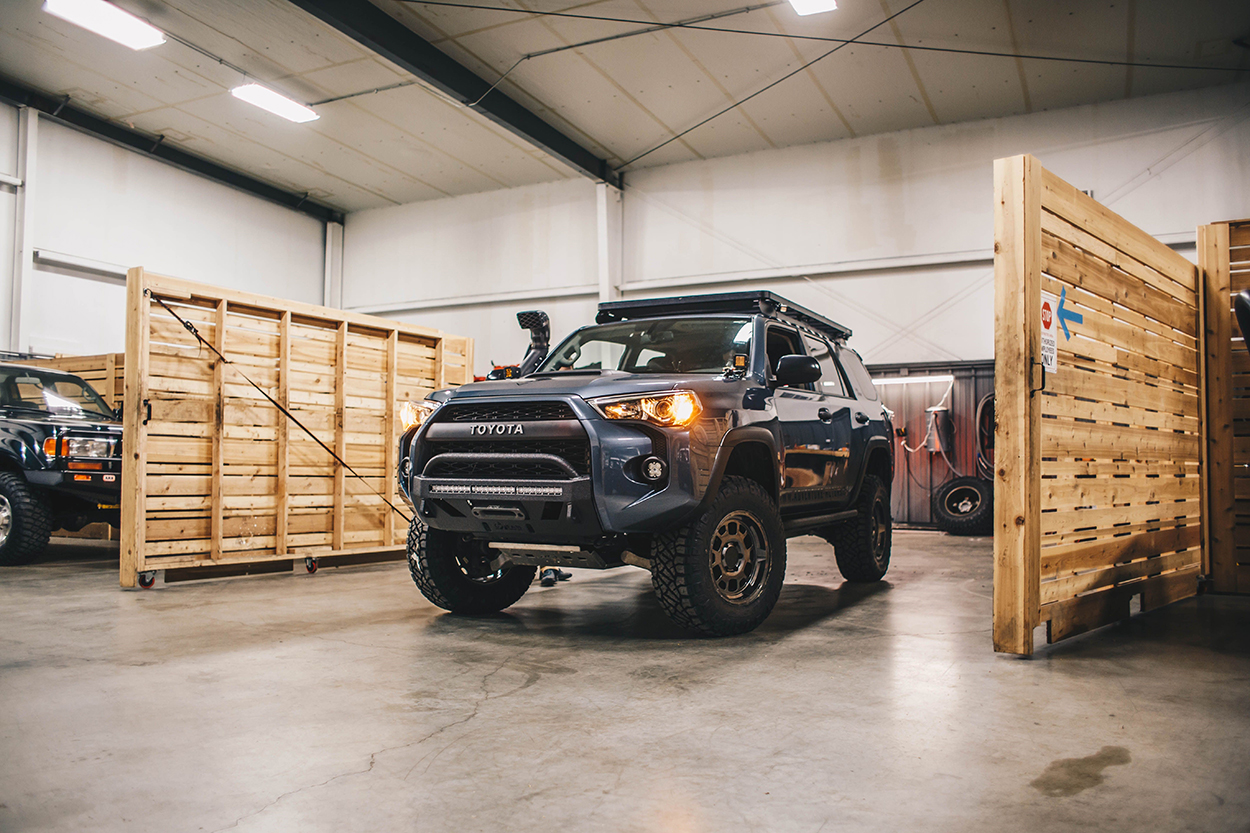 Probably our second to last shop truck. We took a shoreline blue pearl 2013 Trail edition, fully built it, and then converted the front end to a 2014+.

We retained the awesome aspects of 2013 (the rare paint color and black fender flares), updated the look, and fully built it with the best products available. HOWEVER, it was not overdone.

It was such an incredible daily driver but was a beast off-road and a killer overland rig. It was by no means the most built rig we’ve ever done… just the coolest in my opinion.

We did little things like hack up the center console and custom fit in a Snomaster 12L fridge. It fit so well that if you just glanced in you couldn’t even tell.

What are your plans for 2021 and will we see you at any events? 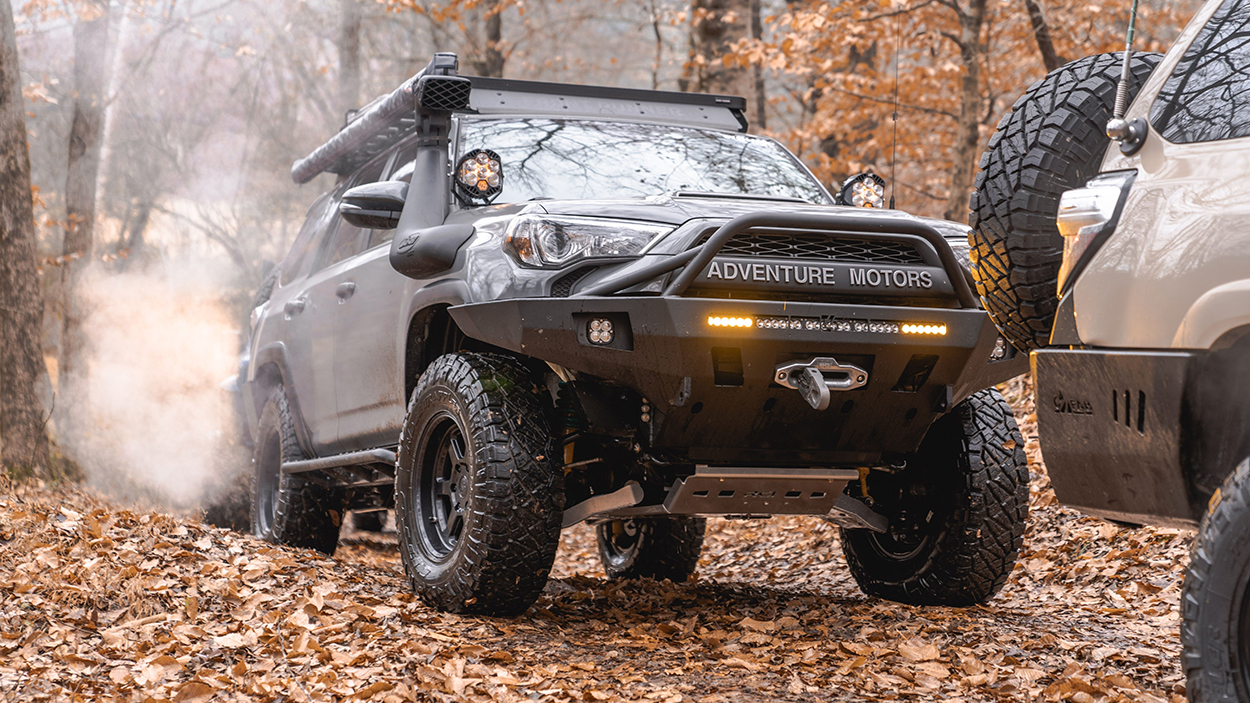 The tail end of 2020 has felt like the 2015 starting phase for us. In 2020 we’ve started offering a lot more services and our goal for 2021 is to continue to expand at an exponential rate.

We’ve also started up a group called the Midwest Adventure Club and we’re planning a massive Overland Festival next fall.

On top of that we’ll be at MOORE Expo, Rendezvous in the Ozarks, HOPEFULLY, Overland Expo if it’s going to start back up in 2021.

Great folks at Adventure Motors. I have contacted with them to do a number of upgrades and simply mods to our 2019 TRD Off-road 4Runner. Great quality work, open and honest staff and friendly bunch!

THESE FOLKS ARE THE BEST !!! always get their take on what needs to be done with your 4×4!

love this shop, its my go to for about 3 years now!