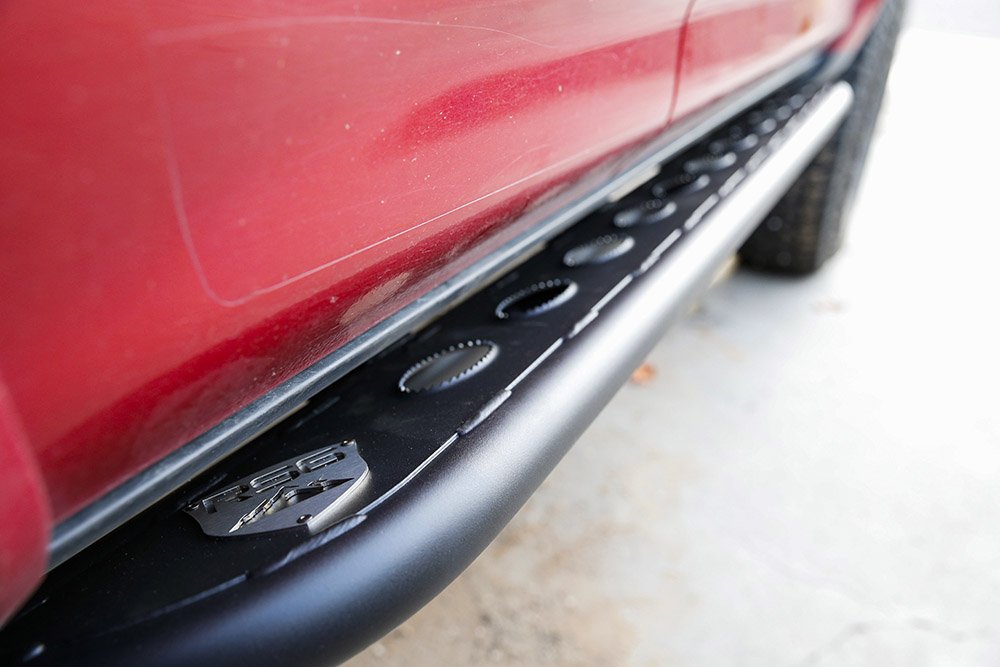 When you go off-roading it’s important to protect your vehicle, especially on those trails that have tight, rocky spots that can cause your vehicle to drift into them; whether by sliding or by bouncing. Unlike vehicles made in the past, nearly everything is less sturdy, and a lot more expensive.

Why risk having thousands in damages, when you can prevent them with a few of hundreds of dollars from RSG Off-Road?

Who is RSG Off-Road?

RSG is a fabrication company located in Lakewood, Colorado, who specializes in rock slider armor for the 5th Generation 4Runner, as well as a variety of other products. If you haven’t heard of them before, you’ve likely seen their solid axle swapped 5th Gen that is on 40” tires on the gram‘.

With so many companies on the market, it’s hard to decide who is best, which rock slider is the best fit for you, etc. I always take things like this into account and decided to go with RSG after owning a pair of C4 Fabrication rock sliders for years.

Most of the change was due to two things. I had improper powder coating done, and like all steel products on the market, if they aren’t protected they begin to rust, which started to happen to me. The other was I no longer wanted a kick out, but also wanted the rock sliders to fit more snug to the body.

RSG fit all of these needs and wants, not to mention they came powder coated from RSG, and they offered a new, never seen before in the rock slider world, grip top plate. 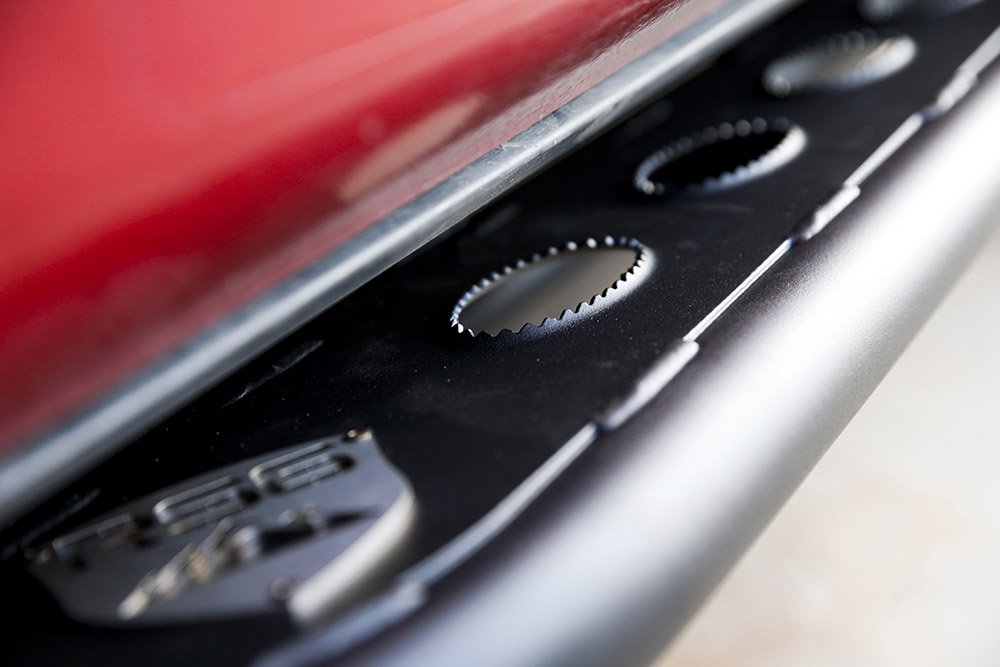 One of the main reasons I looked at RSG was because of their new grip top plate.

When purchasing rock sliders you have the option of getting a top plate, which makes it easier to step on, as there are no gaps in-between the supports. For myself, with my wife and infant child, I decided this was the way to go for when they want to get in and out of the vehicle.

Unlike other top plates that typically have a little molding to help support grip on your shoes, when wet they don’t always do that great of a job and can still cause you to slip. You obviously can always add some sort of grip tape to the rock slider, but ultimately that looks tacky and, over time, they wear down.

Thankfully RSG put both of these together and created a slight rise on the top plate section for grip, but on the circle cut out they made a jagged cut, which allows your shoes to literally “grab” onto the rock slider. Whether it’s dry, rainy, or snowy, you no longer need to worry about the foot slipping on the rock slider, especially if you have important cargo like your wife and child.

One thing to keep in mind is the grip cut is a big jagged, which means if someone were to step on it with their bare feet or fall on it, they could possibly rub some skin off. 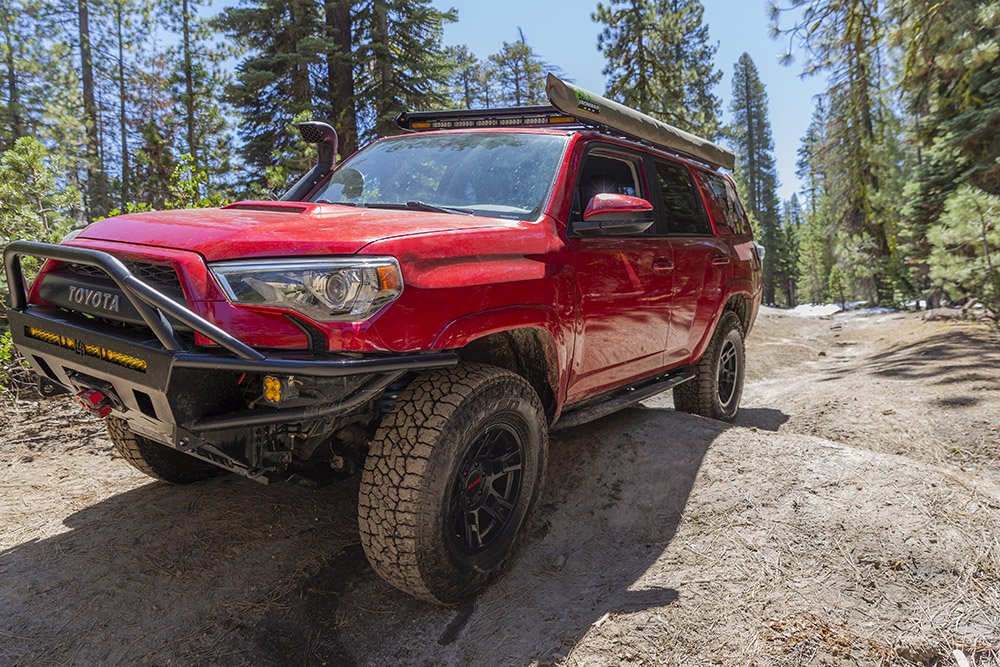 When choosing rock sliders you want to know the features. There’s a lot of people on the market making them, and a lot of them are using thin metal, as well as not strengthening them correctly. Meaning when you smack a rock, that piece that’s supposed to protect you may cause more damage than if it weren’t there, to begin with.

All of RSG’s rock sliders are made to work with KDSS and non KDSS systems. This means you don’t need a special version of the rock slider to fit your vehicle, as any setup will work. Unfortunately, the limit is a little different and requires the removal of the XREAS system, as well as some of the rocker trim. This isn’t an RSG thing, but rather where Toyota has placed such items on the Limited.

The main tubing of the RSG Rock Slider is 2”, a lot of sliders on the market don’t even come in at a full 1” thick. RSG is not only stronger but nearly double as strong, meaning you can feel confident when your slider hits a rock that the only thing that’s being damaged is the rock.

RSG does offer HREW and DOM tubing options. To put in layman’s terms, DOM is much stronger than HREW. If you are doing fire roads or very mild rocky trails, HREW is likely all you need, however, if you are on trails where you find yourself squeezing through rocks and banging against them, DOM is the better option for you.

Like most on the market, RSG rock sliders are bolt-on, meaning no drilling required to install them, just a jack stand or some buddies to help hold them up. Of course, you can tap weld them on or fully weld them if desired, but for what most 5th Gen 4Runner owners are doing, bolt-on will be more than sufficient. 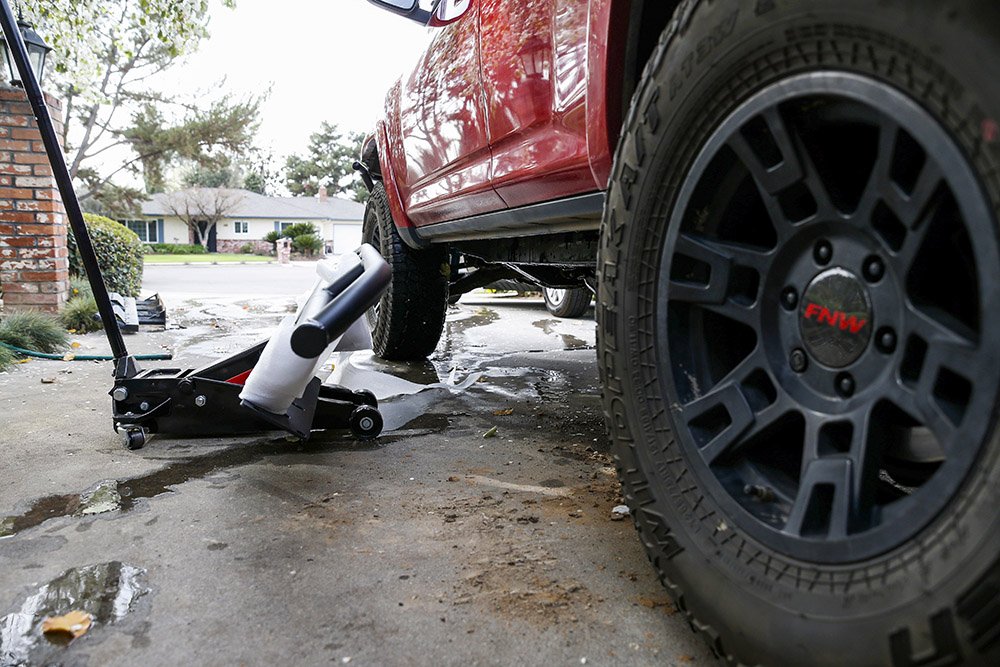 Installation is very simple for the RSG Rock Sliders. The main thing is to match them up on the side of the vehicle they’re going to go on first. Weighing in around 50lbs each, they are heavy and aren’t something you want to have to carry around more than expected.

Next, you’ll want to clean out the holes in your factory frame. If you haven’t been off-roading before, or on any dirt roads, then you can more than likely skip this step. However, if you’ve had your vehicle awhile, and have been on off-road trails, you likely have dirt built up, needing them to be cleaned. Installing the dirt can not only cause issues of tightening down properly but can also strip holes easier. The main thing to remember is to let the holes dry completely before installing the rock sliders.

It’s recommended to use anti-seize so you don’t have any issues with bolts getting stuck in or being harder to get out, should you ever want to remove them. I had an issue getting two bolts out on my C4 Fabrication rock sliders because of dirt and what not keeping them locked in.

Here’s the full-on, step-by-step RSG rock slider install guide you can check out utilizing an earlier style of RSG rock sliders from the one’s I installed for this post. 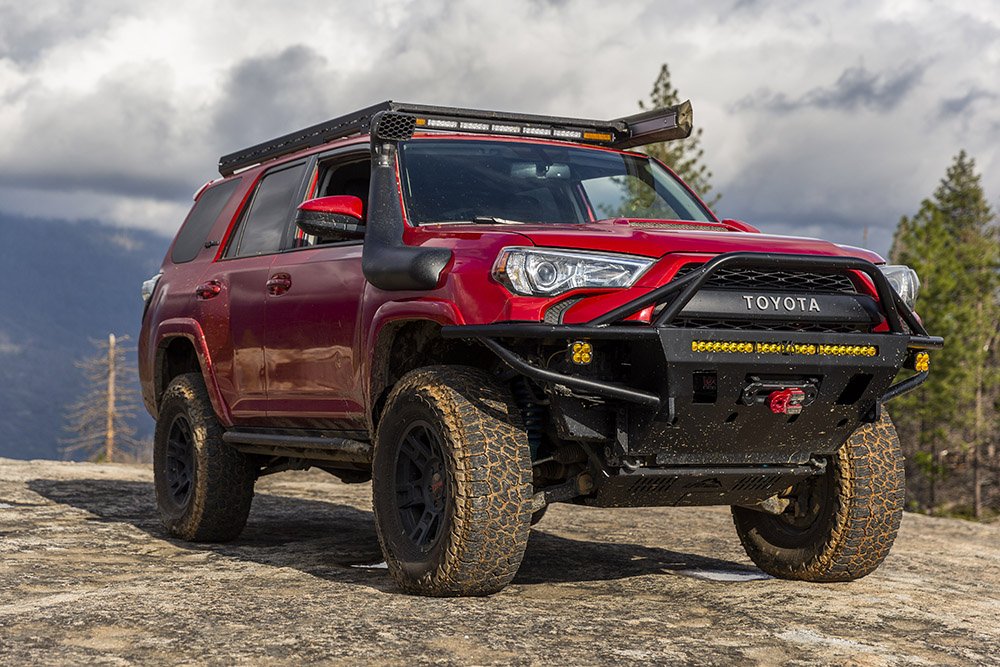 The newly released grip top plate by RSG Off-Road is a game-changer for rock sliders, especially for those of you looking for some sort of way to grip your feet, or your family’s feet, to prevent possible falls when the rock sliders are slippery or muddy.

Unlike others on the market or the use of tape, all of which become ineffective once semi-covered, the RSG “teeth” edges will catch your shoes once the weight is put down on them.

I bought the flat top kickout with grip top plate about a year ago. They have been amazing. Great step for the wife/kids. Easy access point for the roof rack. I hit a rock in a narrow riverbed this weekend it definitely saved some damage. Installed by myself with a jack. Great company.

thanks for the review! are these the 15degree versions? how are they so far as steps? i like the look of the angled ones being more tucked in but my primary use will be for making my way to the roof rack for my snowboards.

These look really well made. Do you know how much they each weigh? thanks

Reached out to RSG, they said 60 pounds each.