Complete Step by Step Install of the Mount Tray

As many of us know Switch-Pros announced that the power module needs to be mounted in the engine bay in a vertical or near-vertical orientation in order to preserve one’s own warranty.

It sounds like they’ve been having issues with water or moisture collecting and corrosion in the plastic connector where the connection pins come out of the power module.

From Manufacturer: “Recommended installation of Power Module is the VERTICAL position, so that water runs off and does not collect on the top of the connector, or face of the module. Improper mounting will allow water to collect on the connector and allow for water intrusion and/or corrosion.”

Regardless of many people’s opinion that “water will never get up in there” or “one will have to be doing some pretty deep water crossings” or whatever other justification for mounting the power module in a horizontal position, I decided that it would be a good idea to seek out a place to mount it as Switch-Pros require.

After little research, I found one product that was a simple flat plate.

I ordered it without thinking much about it but then decided that I wanted a more comprehensive way to have access to the wires and continued to search for other options.

Much to my surprise, I could not find any.

The next logical step for me was to try and find someone to fab one up for me… fail… too small of a project, nobody took me seriously… next step, find someone that would.

I went through the design process and came up with what I am writing upon today.

Since I already had a business practice in place, that side of things was easy, So I present to you the MT-4R5.SM2 Mount Tray for the Switch-Pros 9100 Power Module, by DC Distribution, specifically designed for the 5th Gen 4Runner.

At this time, I have NOT verified if the Switch-Pros 8100 has the same bolt pattern so I cannot say that it can be installed as well, but it has been suggested, by others, that it’s the same. Switch-Pros did not return my email request for information on it.

Future mount trays will be available including a Mount Tray Blank and a tray designed around the Blue Sea fuse block (6 Circuit 5025 and 12 Circuit 5026) and the Blue Sea (Blue Sea calls it ‘Bussman’) circuit breaker (100 amp 7187), but not today as they are still in the design phase.

Well, really they are not far off. I could really use some feedback on user interest on the subject.

Another thought is the Mount Tray with an ARB single air compressor (I doubt the dual would fit).

Overview on Mount Tray for SP9100

The Mount Tray is manufactured from one piece of 1/8″-thick 5025 aluminum.

It bolts in place on the driver’s side of the vehicle in the existing OEM threaded holes and the support brace attaches to an unthreaded OEM hole in the fender, so no drilling is required.

There have been several write-ups, by other people, on accessory trays for the Switch-Pros 8100/9100 in the 5th Gen 4Runner.

I’m not really interested in reinventing the wheel here, so this write up is introducing the Mount Tray and goes through the installation process for it, but not the wiring of the SP9100 itself. 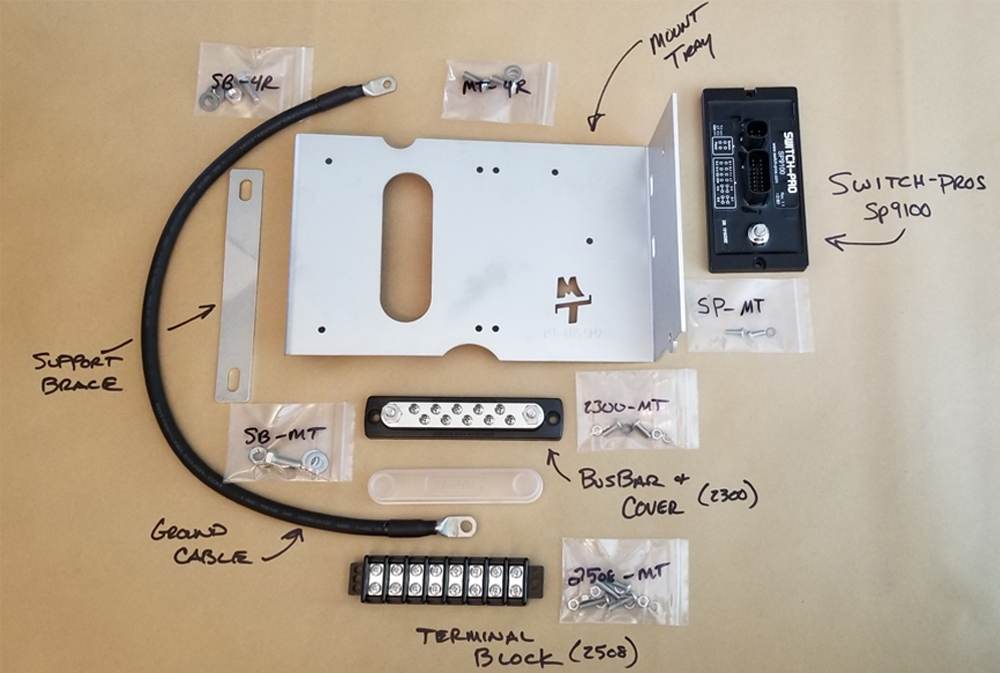 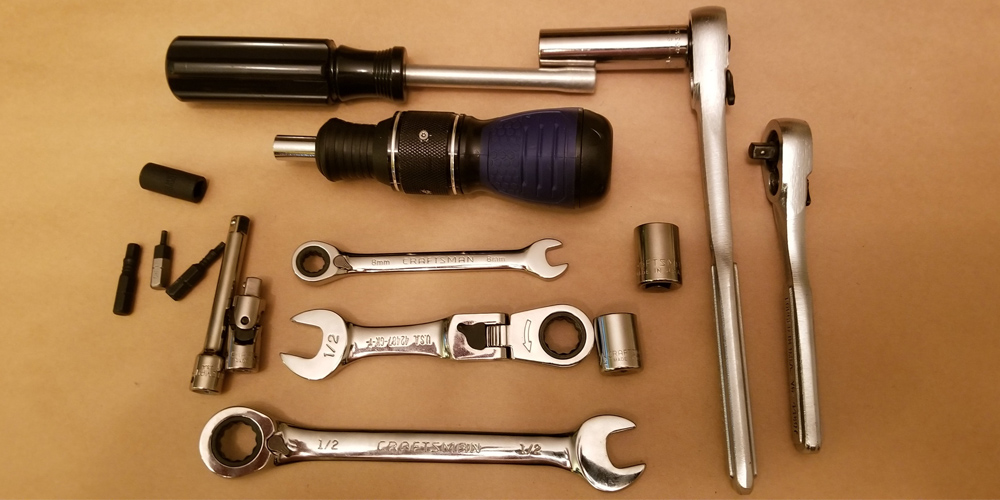 Included with the Blue Sea Package:

What you’ll need that’s NOT included: 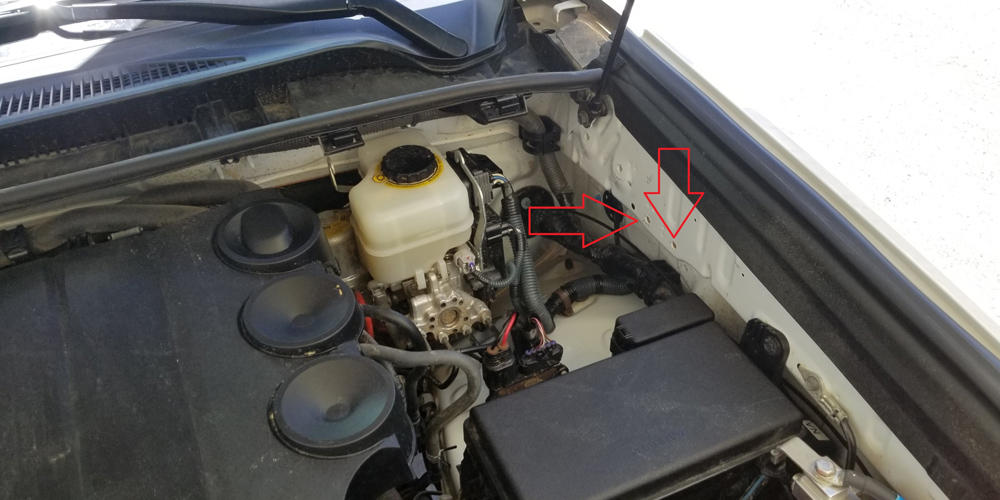 A couple of days before installing on the 4Runner, clean your engine bay…. At least in that area.

Pay particular attention to the location that the Mount Tray will be installed in. Trust me, it’ll install easier if you’re not fooling around with holes filled with dirt or sand.

These are the mounting holes, so be sure to clean these out specifically.

Note: Use of anti-seize on the stainless-steel bolts is recommended. Thread locker, such as Loctite Threadlocker Blue, is highly recommended to help prevent bolts from coming loose from vibration. I have not included instructions as to when to use it because that is up to you. Your methods of installation may differ slightly, so you do not need me telling you when to apply it. 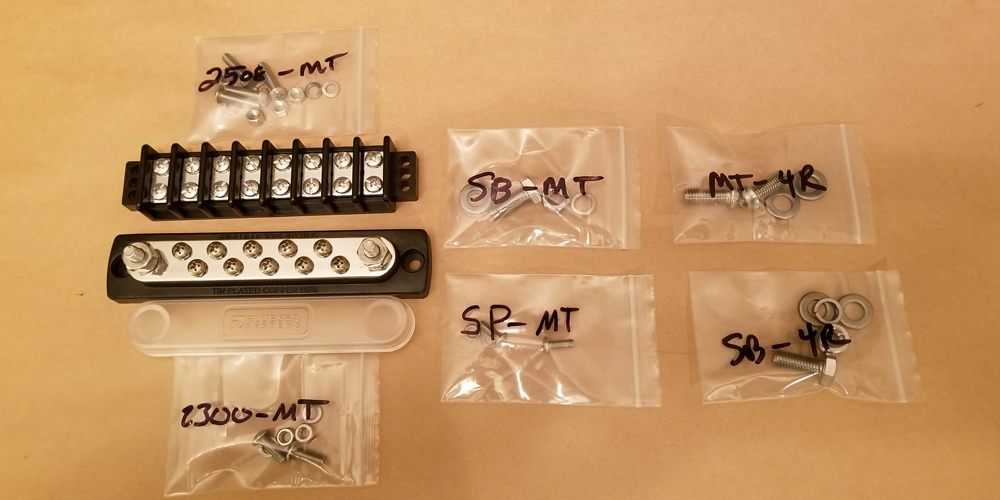 Start by identifying and matching up each labeled package of hardware with it’s a corresponding part.

The bags are clearly labeled and hard to mess up.

Once it is loosely installed and you’re happy things are positioned to your liking, tighten down the nuts.

Note: Make sure to not over tighten them so as to not crush the plastic housing. 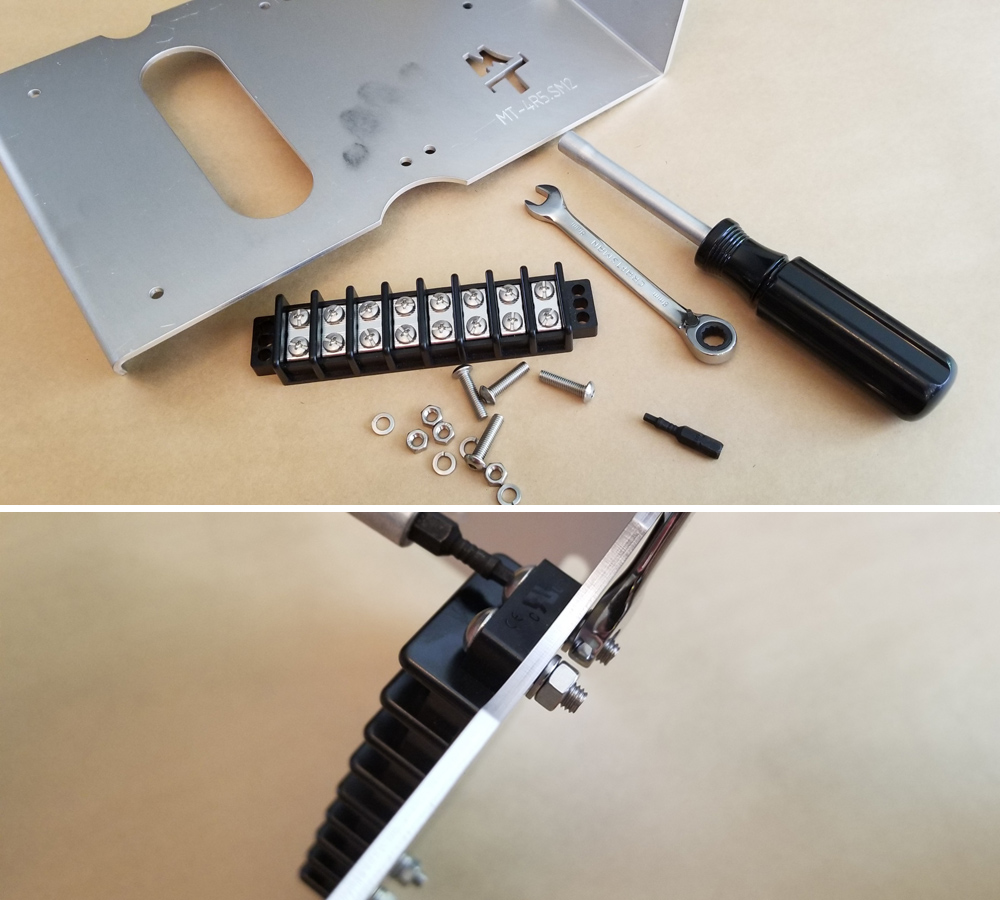 Next, install the Switch-Pros SP9100 power module onto the Mount Tray. You’ll need the 3/32” Allen/hex bit to tighten the nuts, making sure not to over-tighten them.

Ensure you’re installing the power module upright with the power stud to the right.

Now its recommended to work towards connecting your accessory wires from the power module to the Blue Sea 8 Circuit Terminal Block.

This is going to be the part not covered by me here as it is not part of this scope, but you’ll want to make these connections happen while not leaning over the engine bay.

When you’re done with the Terminal Block/SP9100 connections, install the BusBar with the same general procedures from the previous step.

After prepping the BusBar hardware, setup the (+) and (–) terminal ends.

The next thing to do it loosely attach the support brace to the Mount Tray.

Because space is tight under there, this will prevent dropping the brace down into the 4Runner engine bay during installation or possibly onto the skid plate

Note: Make sure that the bolt, nuts, and washers are loosely tightened.

The direction does matter on the support brace.

I had to remove the brace from the Mount Tray and test it to see that the bottom of the brace lined up correctly with the 4Runner fender. The brace is labeled with an “MT” on the face that should be installed up to the Mount Tray. 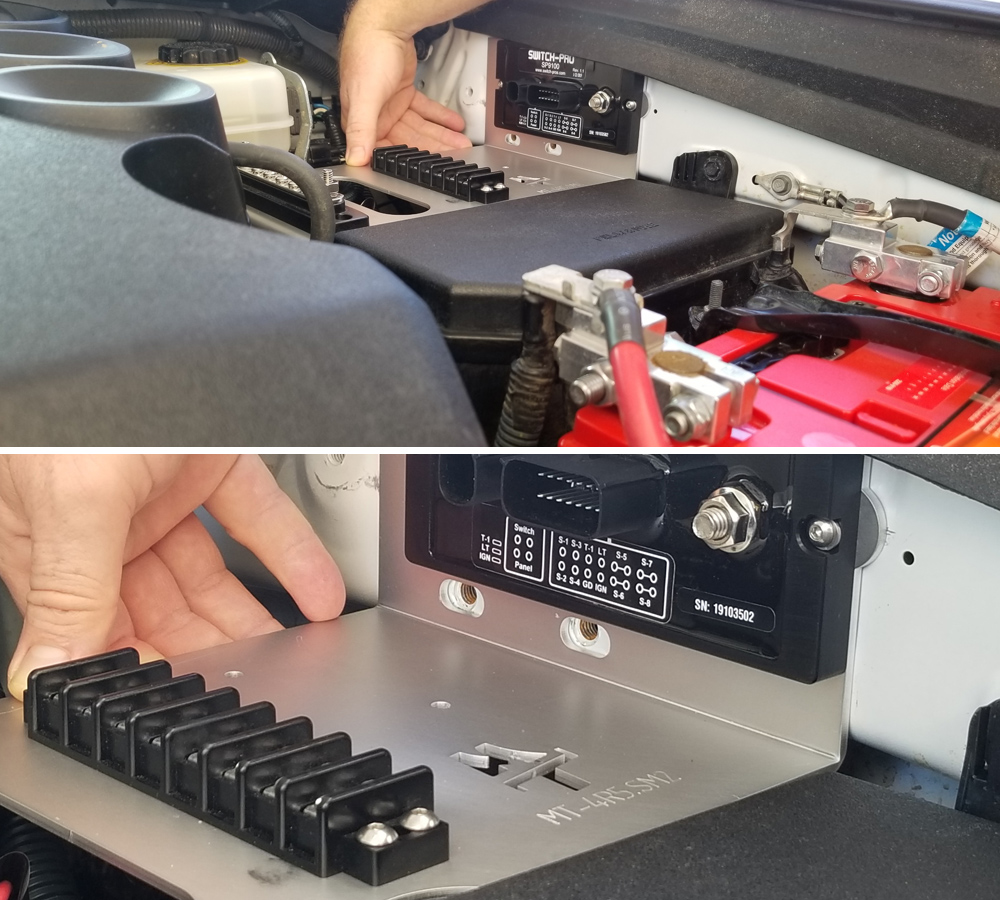 Once you get the Blue Sea parts installed, all the wires connected from the SP9100 to the terminal block, the BusBar and support brace correctly aligned, then you’ll install the Mount Tray onto the 4Runner.

As mentioned before, it is smart to clean the engine bay and the mounting hole locations prior to the day of the install as you want it to be dry in there too.

With the Mount Tray in position, lightly thread the fender bolts into their designated positions.

Note: Be careful to not cross-thread; Be sure to use Loctite. 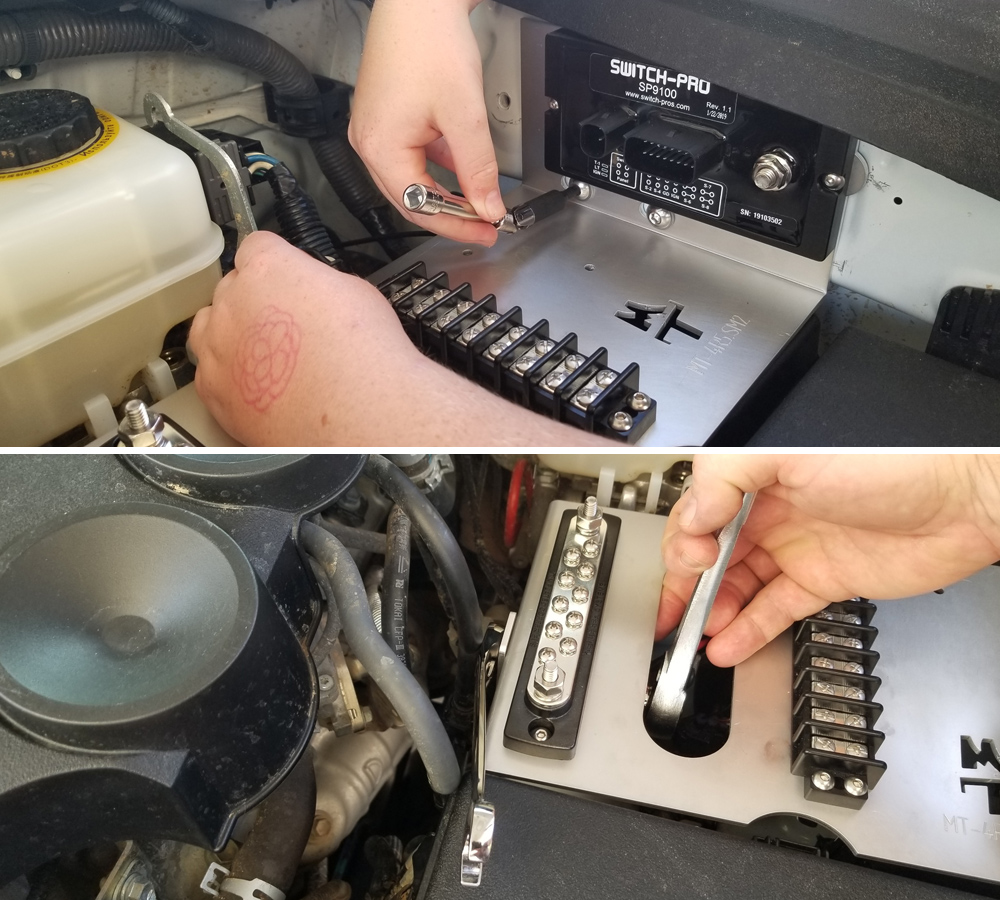 Line up the bolts for the Mount Tray through the slotted holes under the SP9100 and thread them into the OEM tapped holes.

Screw them in most of the way leaving them loose enough for you to be able to adjust and shift the Mount Tray to your liking.

Note: Making sure in loosely installing mount tray to upper fender wall, I used a universal joint with a ratchet extension and the Allen/hex bit holder to get the right angle.

At the bottom of the Support Brace, loosely install the bolt, washers, and nut through the non-threaded hole of the 4Runner fender and Support Brace.

Tighten the Mount Tray to 4Runner bolts first, and then tighten the support bracket bolts, top, and bottom.

Tightening (but still loose) the Top of the Support Brace to the Mount Tray… 1/2” Wrench and a deep 1/2” Socket worked well. 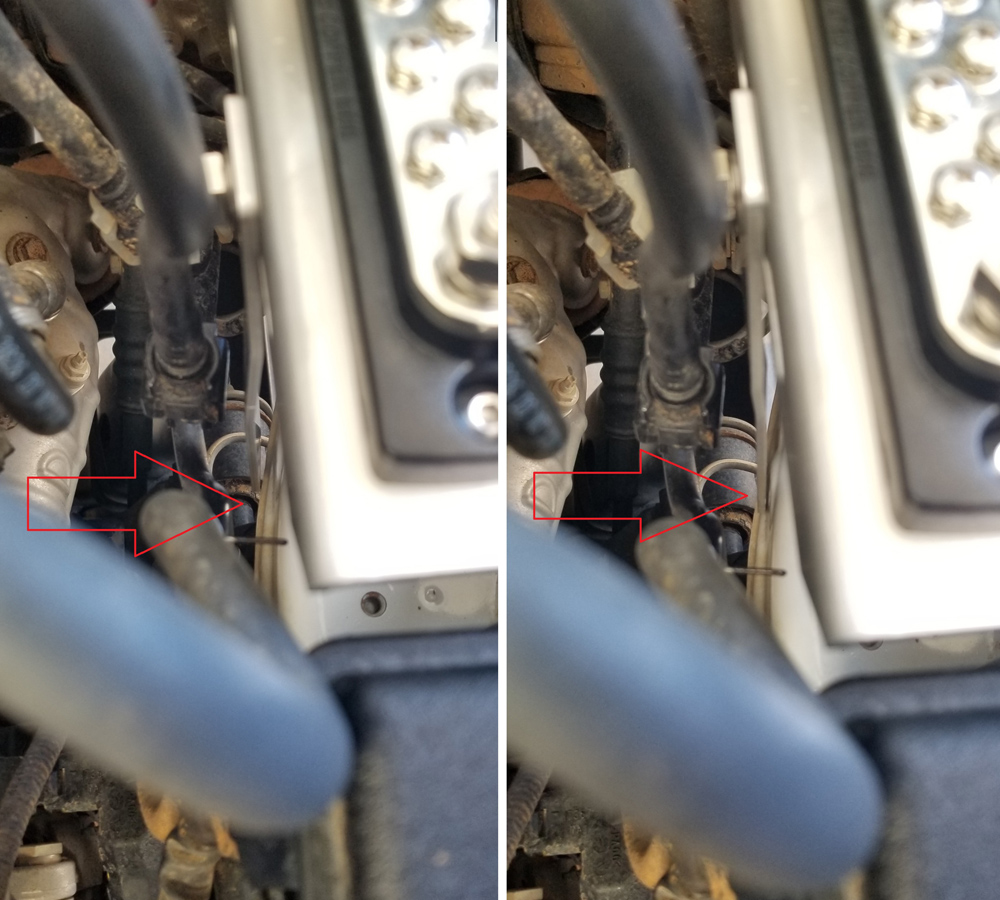 Lower 4Runner Fender where your helper came in handy 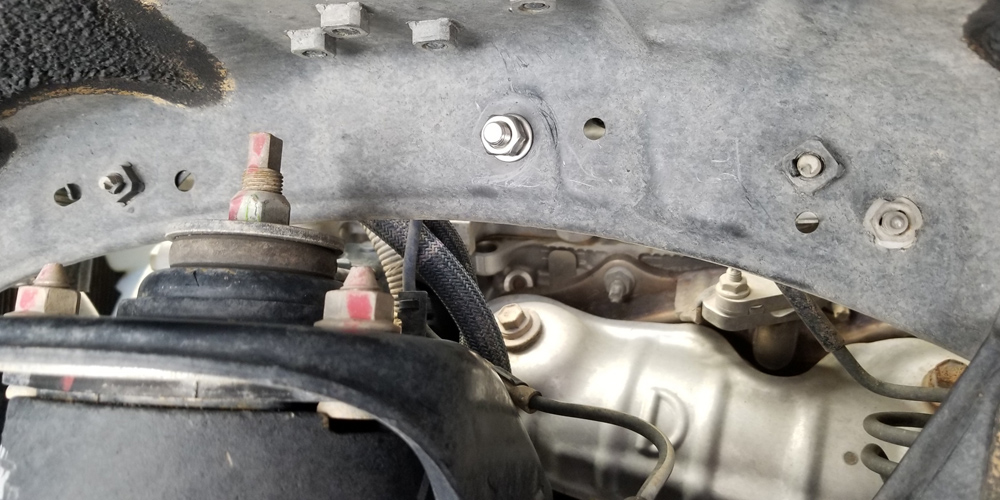 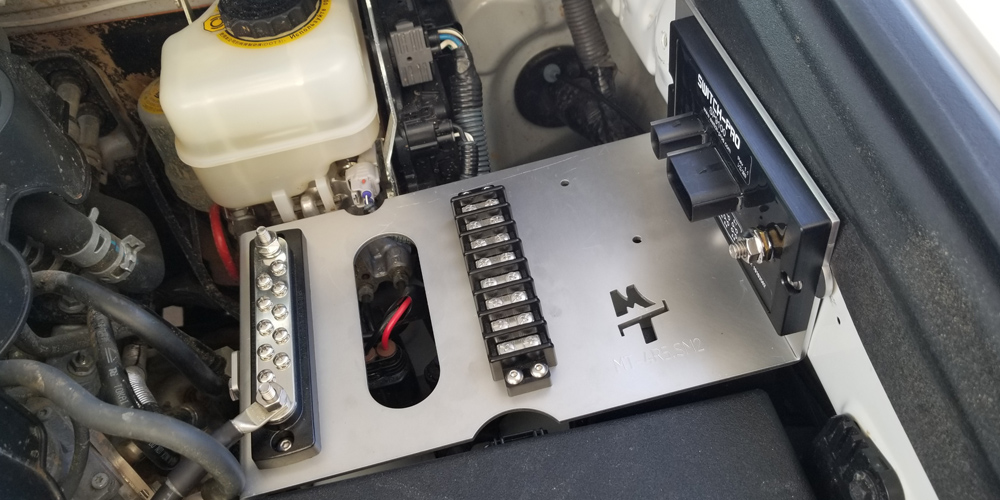 Install the ground wire to the Blue Sea BusBar 2300 stud using the ratchet and 1/2” socket. The stud torque specifications per the Blue Sea website is 60 in-lb.

Before tightening everything down, recheck that the Mount Tray lines up as you wish. You want the SP9100 to have as much room as possible, so down and forward is preferred.

You are now ready to proceed with the installation of the SP9100 and wiring up your mods!

I highly recommend checking on your Mount Tray periodically to make sure the bolts and nuts are still tight.

4Runner Engine Bay – Before & After 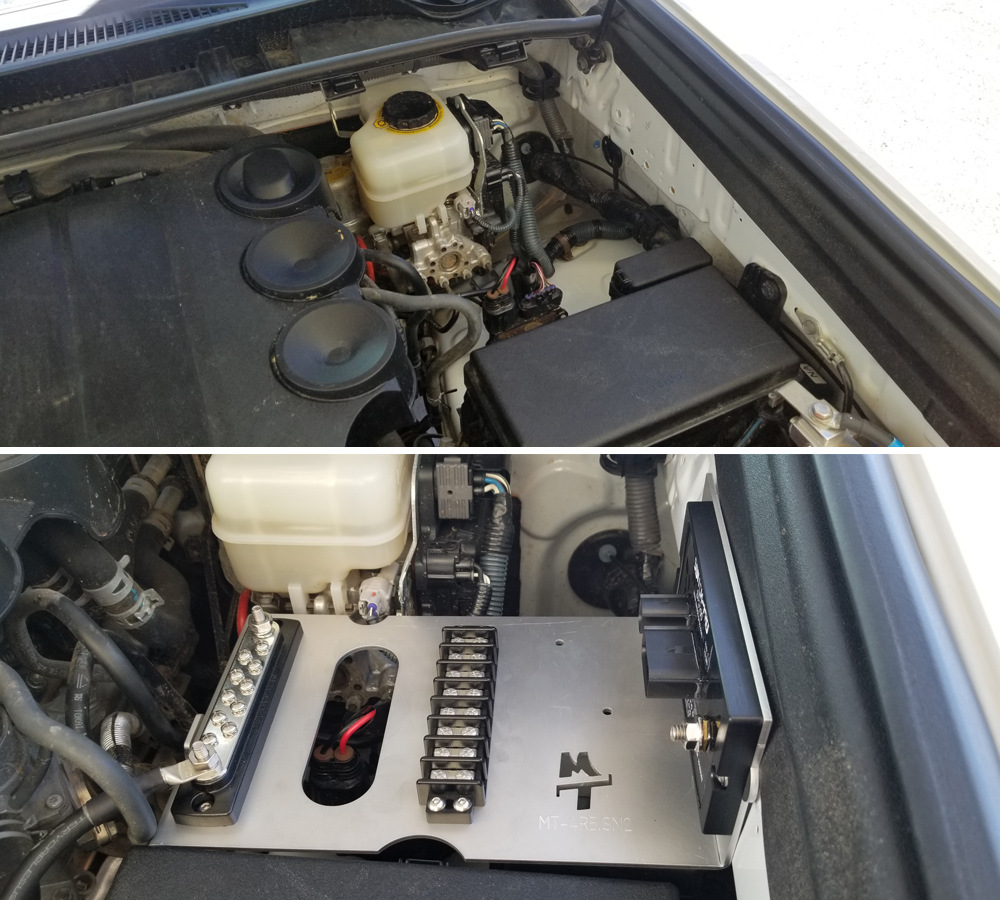 In conclusion, the Mount Tray provides a nice clean way to hook up your mods in conjunction with the Switch-Pros SP9100.

It’s pretty basic to install, setting aside the installation procedures for the SP9100 wiring itself. You’re going to need to decide where that fits into your install methods, but that’s why we have the Terminal Block, isn’t it?

Feedback on the Mount Tray is encouraged along with ideas on what’s next for DC distribution.

However, it looks like that’ll be the blank mount tray and/or the fuse block/circuit breaker.

What do your mods require?

Several versions of the Mount Tray products available now including the:
2020 MountTray for the 5th gen 4Runner…. This is set up for the Terminal Block, but it will accommodate the 6 Circuit Fuse Block, Terminal Block, BusBar and Circuit Breaker on one.
Just bringing this information forward….
4th gen 4Runner available as well

2020 5th Gen 4Runner Mount Trays with the vertical mounting of the Switch-Pros Power Module are on their way !! (May 2020)

Looks like a great idea for sure and absolutely recommended but at the end of the day, how much does it matter mounting vertically vs. horizontally? Will you have multiple configurations available? Do you have a website?

At the end of the day, its about choices. If you mount it horizontally, it fails and you have to replace the Power Module, then it just cost you a few hundred dollars… It matters to those that have mounted it horizontally and had it fail, I’ve read and seen it. It can be seen as an end user preference as well. With options, we get to choose what suits our needs best.
There is a Blank Mount Tray (no holes or slots for accessories) and a Fuse Block Mount Tray which has holes for the Blue Sea BusBar as well as the Blue Sea 6 or 12 Fuse Block. Slots are on either side of the FB. These two Mount trays are available in about two weeks.
Interested people may contact me as described above. No website yet.

This is great to see. I was going to get the powertray option only because there was no good option to mount the switch pro vertically. I plan on including a 5025 fuse block so I am looking forward to seeing that design. It would also be nice to have some built in spots for relays.

Hi Bryson, thank you for the feedback. The Fuse Block Mount Tray is on its way, 2-3 weeks out. Relay spots did not make it into this build, but i’ll add it to my thought processes. If you’d like to email me at the email address above (sdoffroad@…..) I can communicate updates to you on delivery of this one.