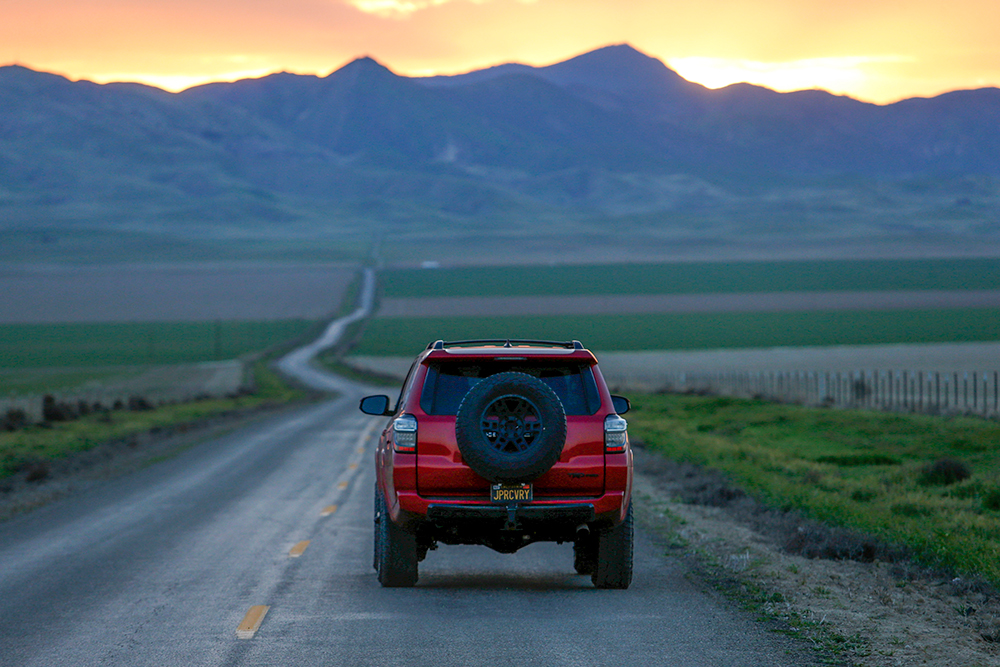 Have you been looking for a spare tire carrier for your 5th Gen 4Runner? Another generation? Another vehicle?

There are many options on the market for such an addition to your 4Runner, but one you may want to consider is the Detours Knucklebone Tire Carrier.

When I started to off-road more serious with friends from OC Overland, I decided that it was time to get the spare out from underneath.

Some of the reasons included being worried the spare would be sliced on rocks when the rear drooped. And if I were in a situation where it was muddy, snowy, etc, it would be a pain to get the spare down from underneath.

Of course, the look of having the spare on the rear rather than underneath was a perk for me as well.

Tire Carrier Companies To Choose From 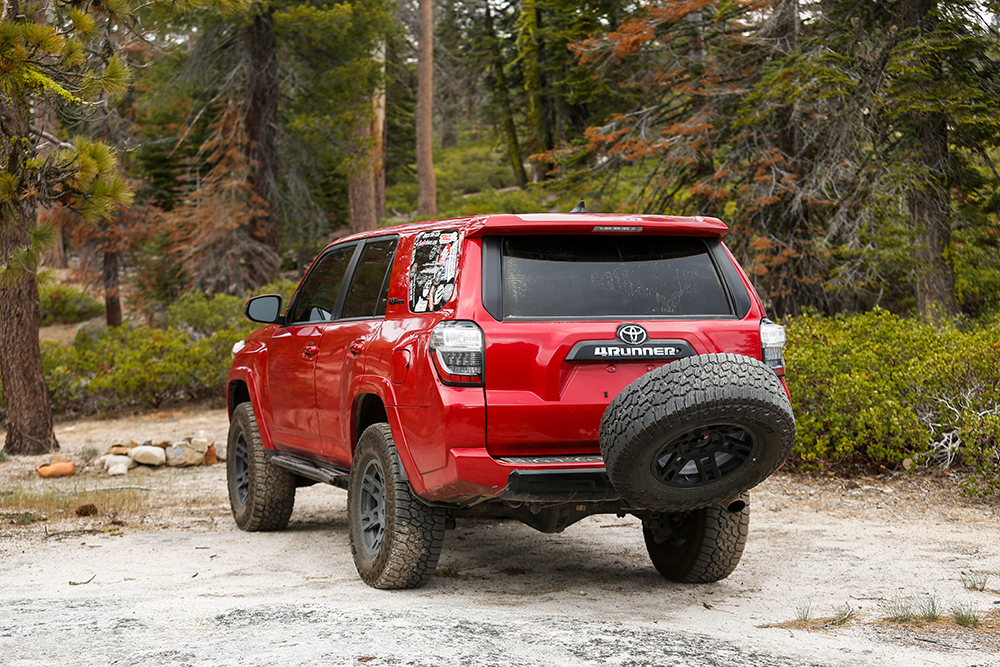 I looked around at various different versions I could find online at the time, most of which all led to Wilco. While Wilco is reputable and quality made, I hated the look of theirs, not to mention the price.

I found random other small companies that I can’t remember anymore who made them, but again they just didn’t look so great.

This was well before the RIGd UltraSwing came out, and had that been released while in my search, it may have been a contender, although the price is still a little high compared to the DK.

At the time (about a year ago), I somehow ran across someone who was running the Detours Knucklebone.

I liked the way it looked, it had multiple options for tire size, swing out or swing down, and was made by a small business owner here in the United States. Basically, everything checked out to what I wanted, including the price which was just a fraction of the cost of the Wilco.

At the time, for my tire carried I paid $330 shipped, the owner was even nice enough to paint the carrier for me for free as I caught him between a move when business was slower for him. 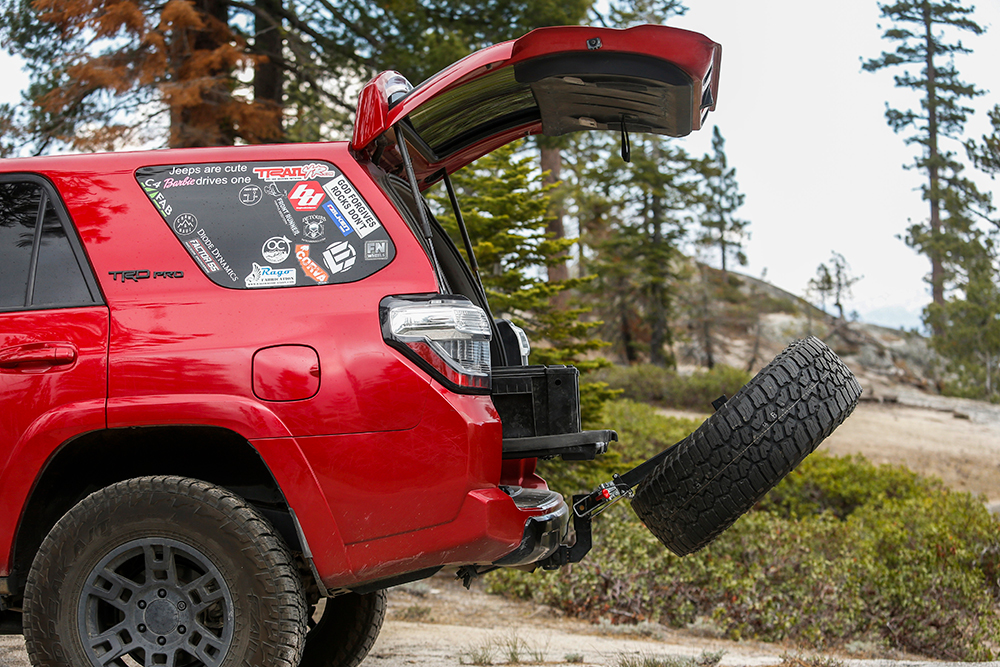 For my Detours Knucklebone, I chose the following options:

The 70% drop allows you to lower the tire carrier to a point where you can get around easily in the rear hatch.

Additionally, if you have a rear cargo slider as I do, you can fully pull it out without any issues. I suppose if you were putting something large in the back, such as a dryer or washing machine you could run into an issue with the tire, but daily life and off-road/camping will cause no issues.

Another reason I went with Detours is because of the ability to choose how close or far away the tire sits from the rear of your vehicle.

The carrier slides into the hitch of your 4Runner and then is tightened down using the hex tool that comes with the carrier. You will need an extension for your ratchet to tighten the wedge lock that the carrier uses to keep the carrier nice and firm. 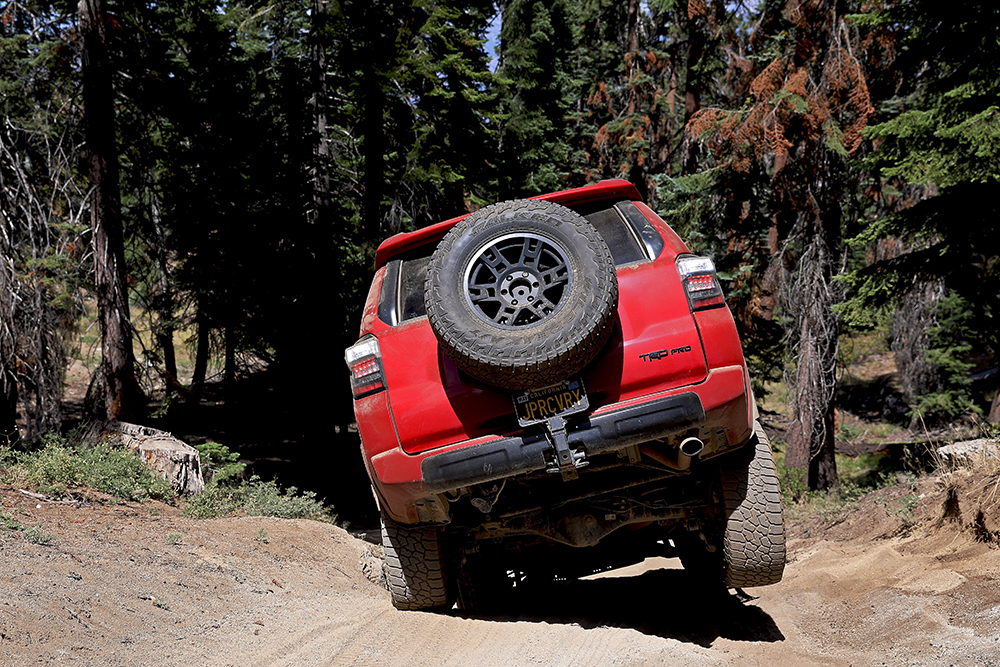 I have off-roaded on many trails from your basic fire road to black diamond, and have had many people say how well they liked it not moving.

I really have nothing negative to say about the carrier.

If I had to nitpick it would be for two things. Both of which are done so it can be universal for all tire sizes (up to 40″) and wheels.

The carrier uses a pressure bolt style system for the wheel holder. This means the bolt pushes against the “arm” of the carrier to keep it in place.

Though extremely safe, I am a paranoid type of person, so all I could see was it somehow falling off on the highway.

Because of this, I decided to mark and drill a hole the entire way through so the bolt would go through. I then had a friend weld the bolt in place, as well as the wheel holder to the “arm” of the carrier for extra security.

The second thing would be the bolts to hold the tire on.

They come free, meaning if you were to get stuck in a deep area of sand unless you have someone holding the tire or watching, the bolts will drop and possibly be lost in the sand.

Because of this I again had welding done with the bolts to the wheel holder so whether I was putting the tire on or taking it off the bolts would go nowhere.

Again that is more nitpicking and shouldn’t be a complaint as that’s done for the universality of the carrier. 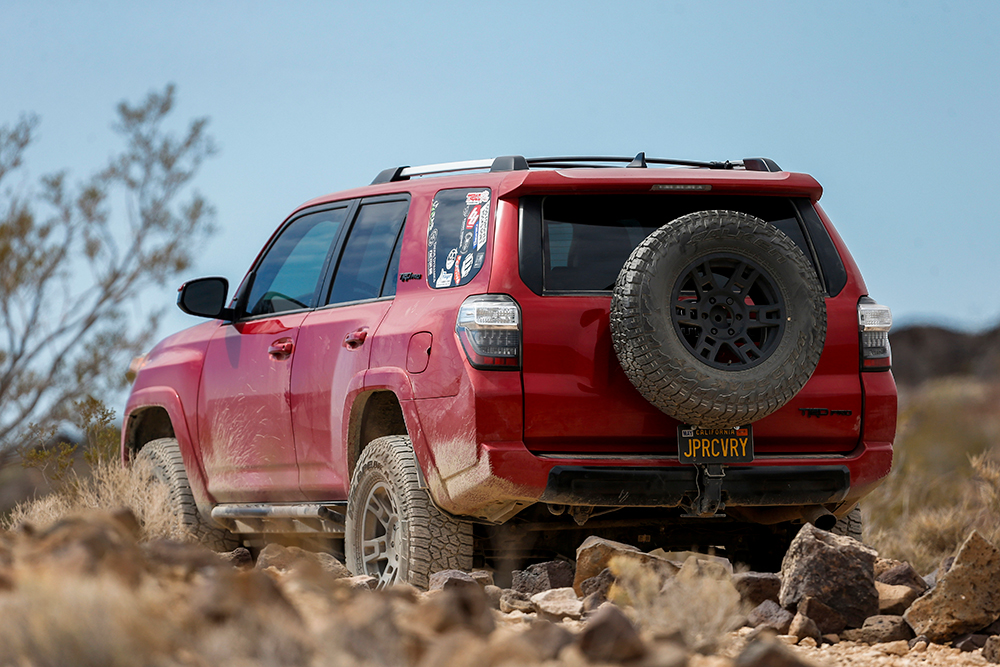 If you are thinking of owning one you may want to do the same. Though keep in mind if you were to change tire size (larger or smaller) you may have a larger gap, or the tire could be rubbing against your hatch.

70% of that would be off-roading. Dirt roads, black diamond, washboard roads.

It has also been on a 5 day, 3,000 mile trip from the East to the West Coast. The carrier has also experienced everything from 110-degree weather to snow and ice.

It hasn’t budged, failed, or anything of that nature. I have had to tighten the carrier down three total times since the install. Once after the first 50 miles (per instructions), another for when someone tapped my bumper and it needed to be repaired, and lastly since the last 10,000 miles I put on.

If you are interested in a tire carrier and don’t want to pay the $1,000 of a Wilco, give Detours USA a try.

I would recommend staying away from this vendor. There have been numerous complaints about lack of response and some people are waiting over 1 year with no product or communication.

Does the tire carrier fit a 4th gen?

Can you post a picture of your backup camera screen? I wanted to see how much of the view is blocked…i’m guess all of it. 🙂

Thanks for the review, I went with RuggedRidge Swingout version. It should be here at the end of May or first of June. I ordered SSO backup camera relocation kit and trailer end connector wire to power license plate light.

Can this work on a 4th gen 4runner

Thanks for the review! I’ve been looking at Detours of Maine for a while now and am between this knucklebone, and the swing away.

What were your personal reason for going with the knucklebone instead of the swing away?