It is very sturdy and has an angled edge to prevent it from catching up on rocks.

In this guide, I will show the full install process. 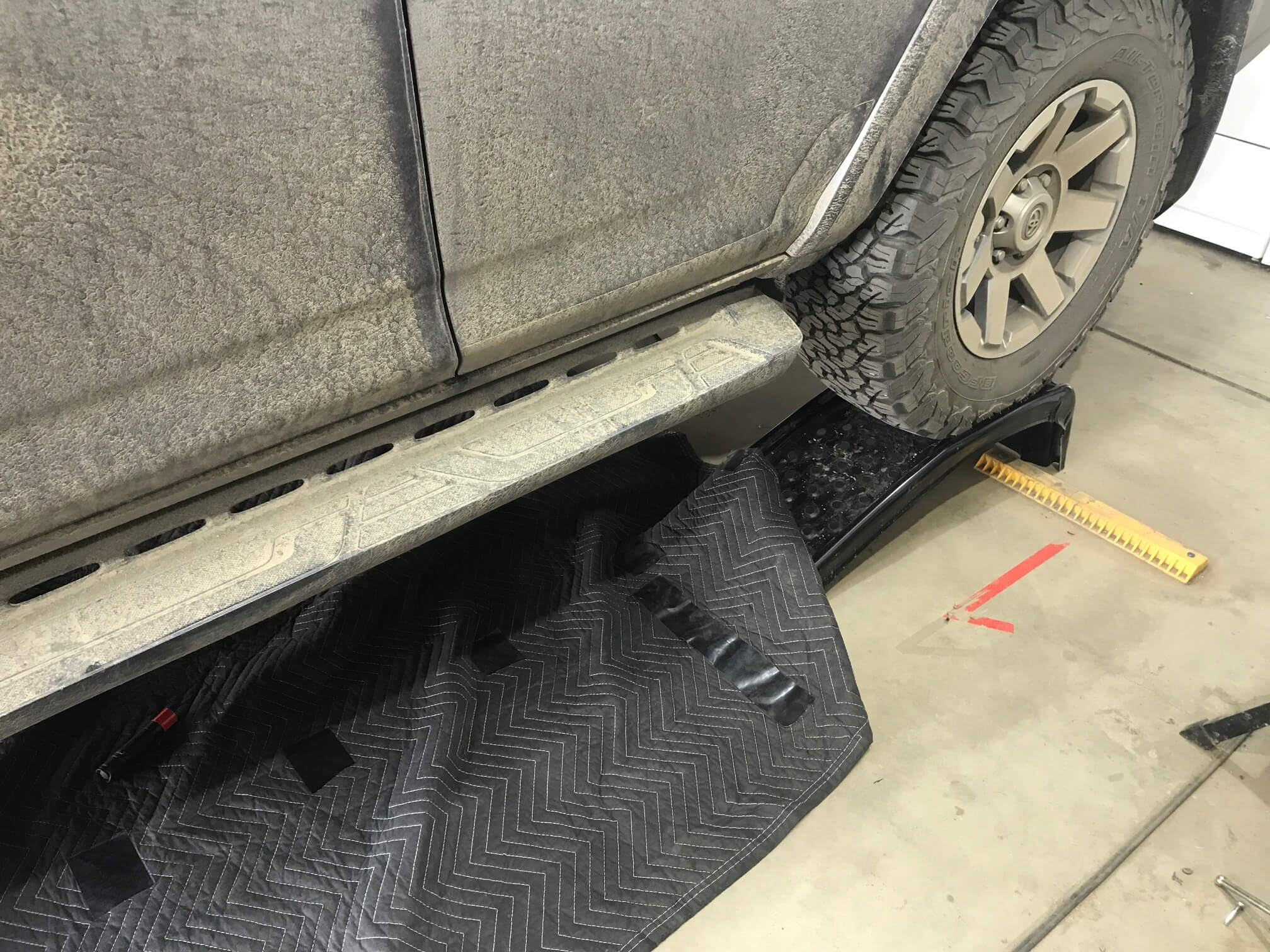 Start by either jacking up the car or driving the rear tires onto ramps.

Make sure that you use jack stands in addition to a jack for safety. You will need the jack later anyway.

Optionally, place a moving blanket below the car where you will be working.

This makes the work more comfortable, keeps you from getting covered in dirt, and keep the plate from getting scrapped up before you hit the trails.

The gas tank is supported by two steel bands so there is no need to drain the tank before installing the skid. 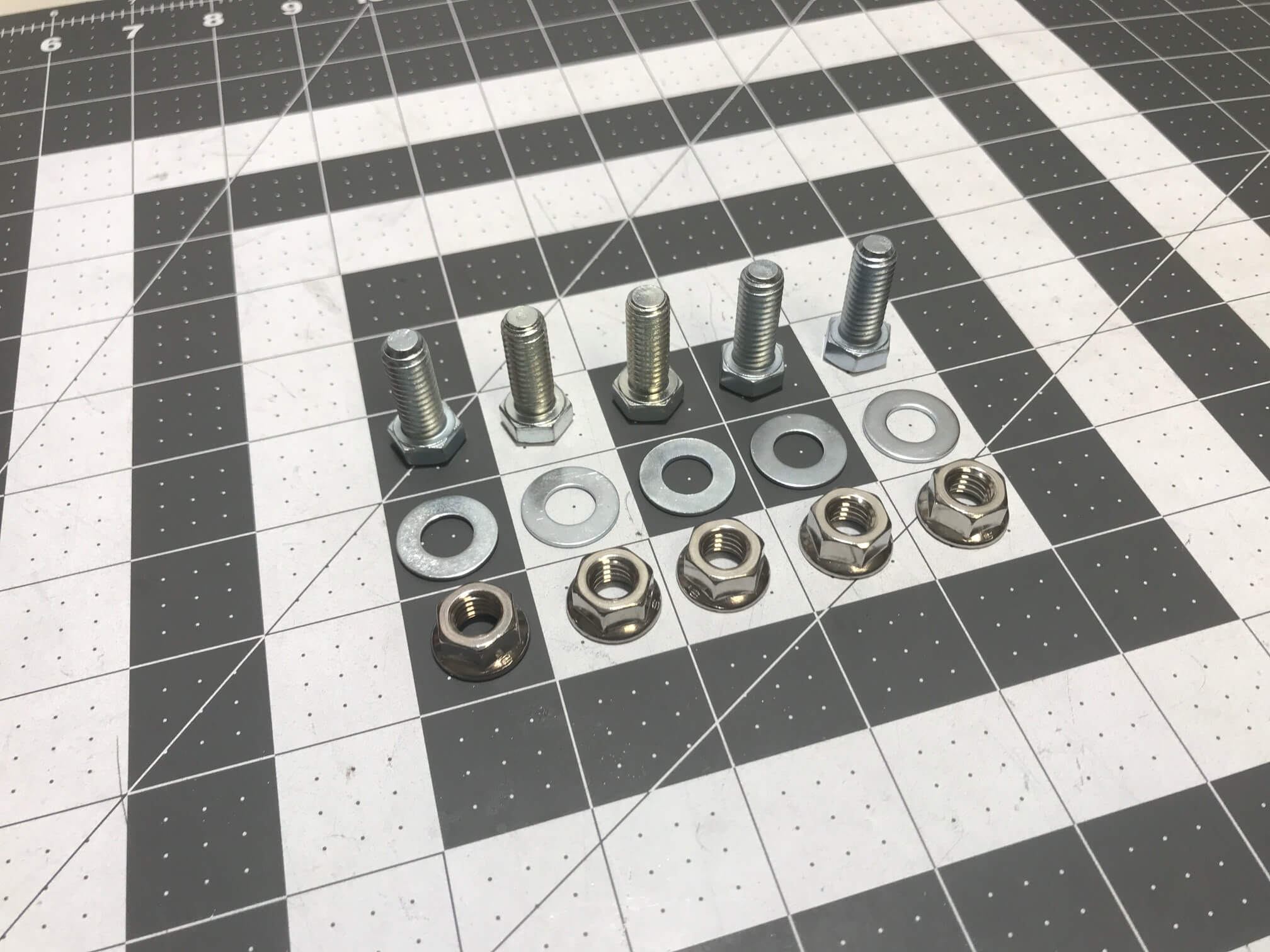 You will re-use all of the bolts that you take off the stock skid, so do not dispose of them.

These provided bolts are just for attaching the support arms to the skid plate. 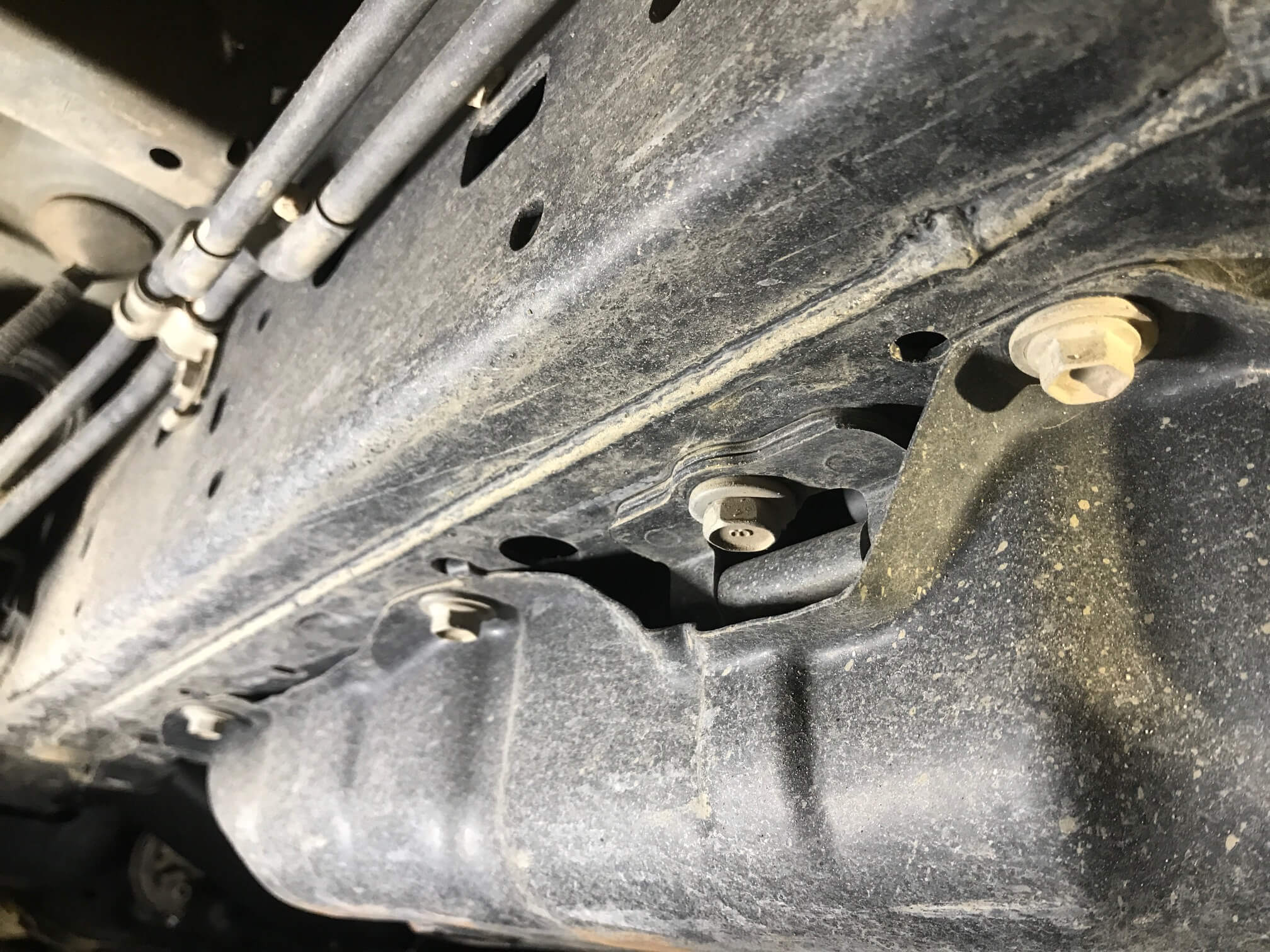 There are 3 bolts the connect the stock gas tank skid to the driver’s side of the frame.

Remove them and keep them. 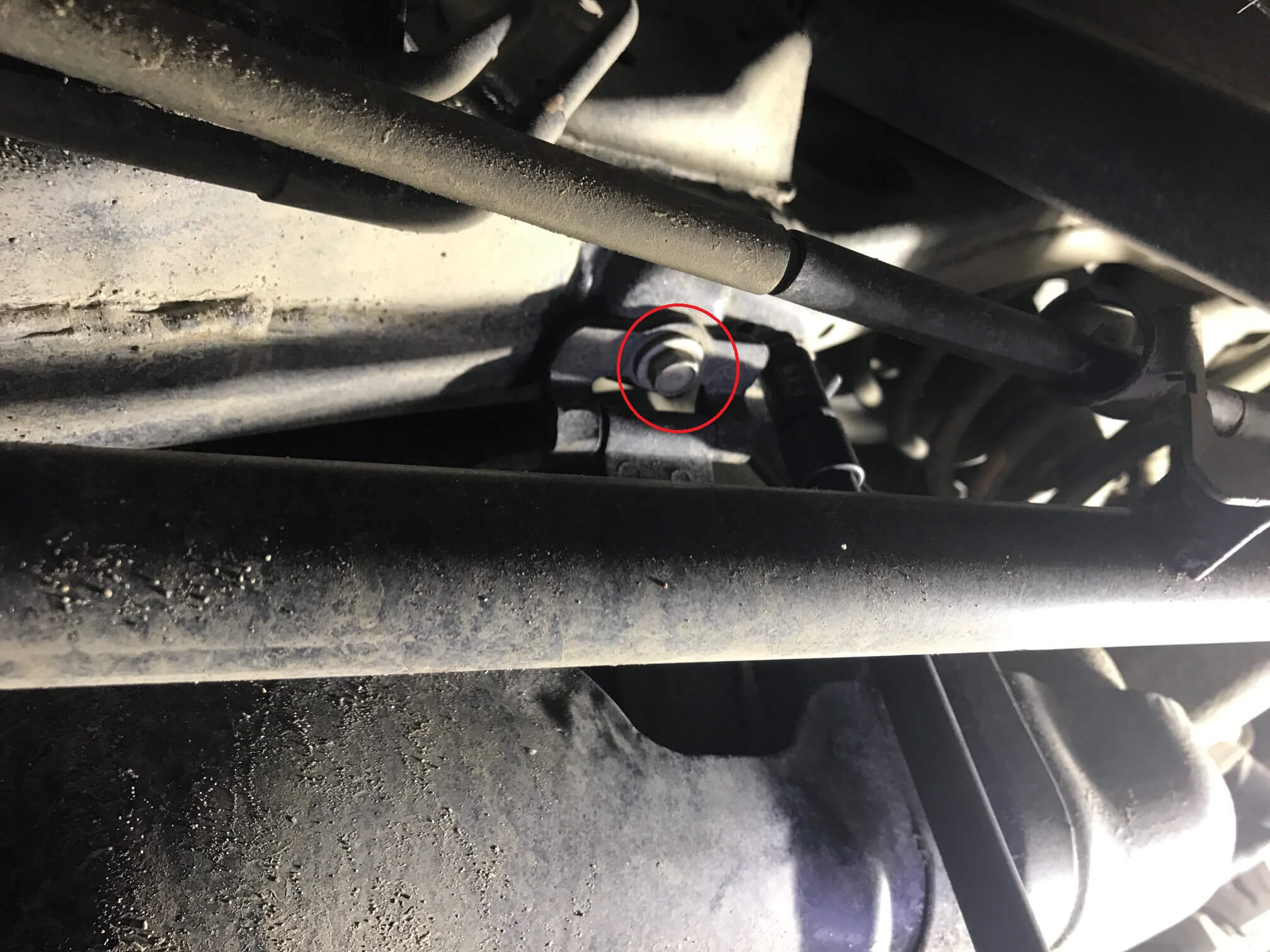 There is a bolt near the back of the skid plate on the driver’s side that can be removed with a socket and extension.

Remove it. There is also another bolt directly opposite of it on the other side of the skid. 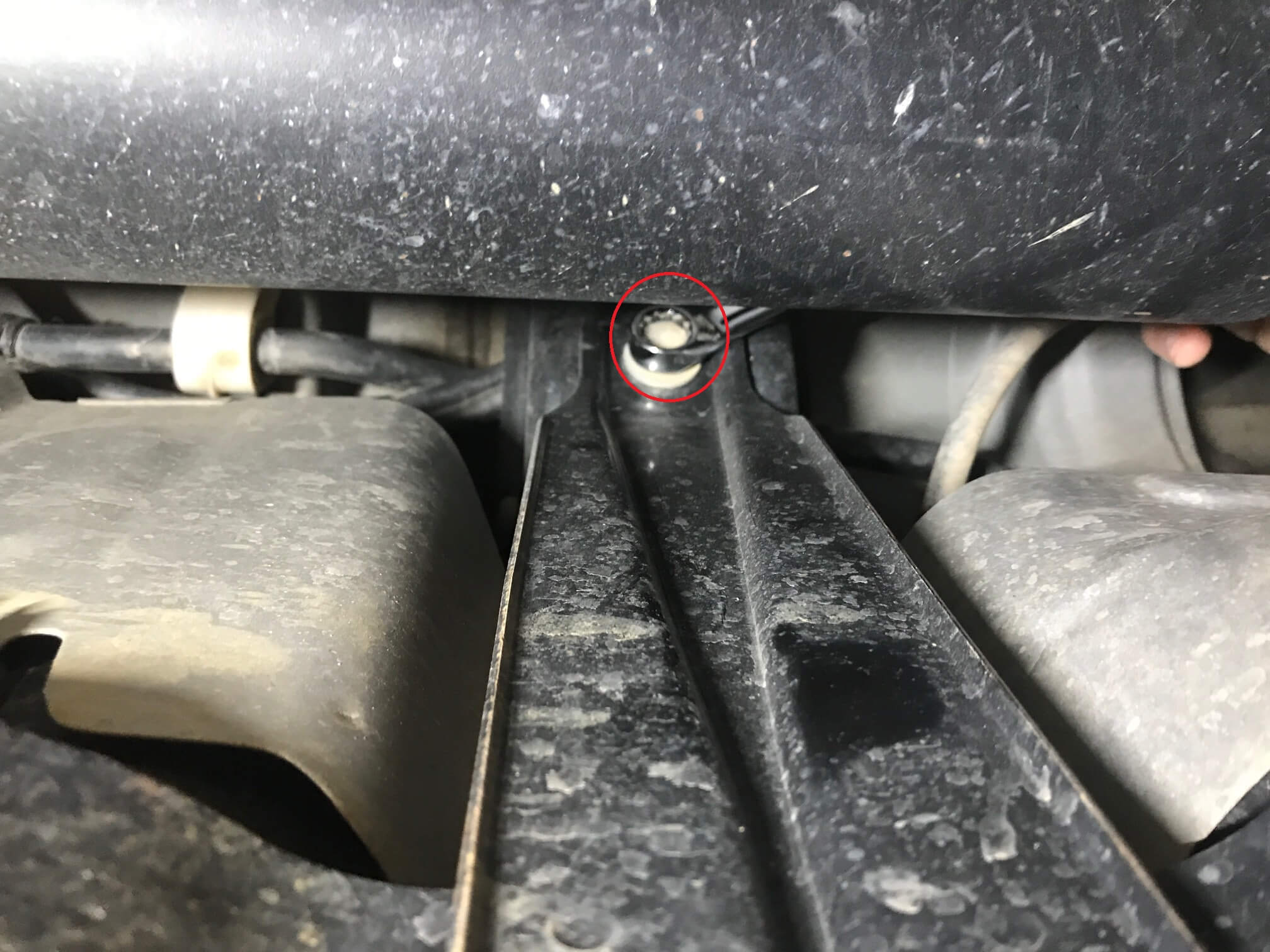 There is a bolt near the front of the skid plate on the passenger side that can only be removed with a standard wrench.

A ratcheting wrench with a socket will most likely not fit because the driveshaft is in the way. 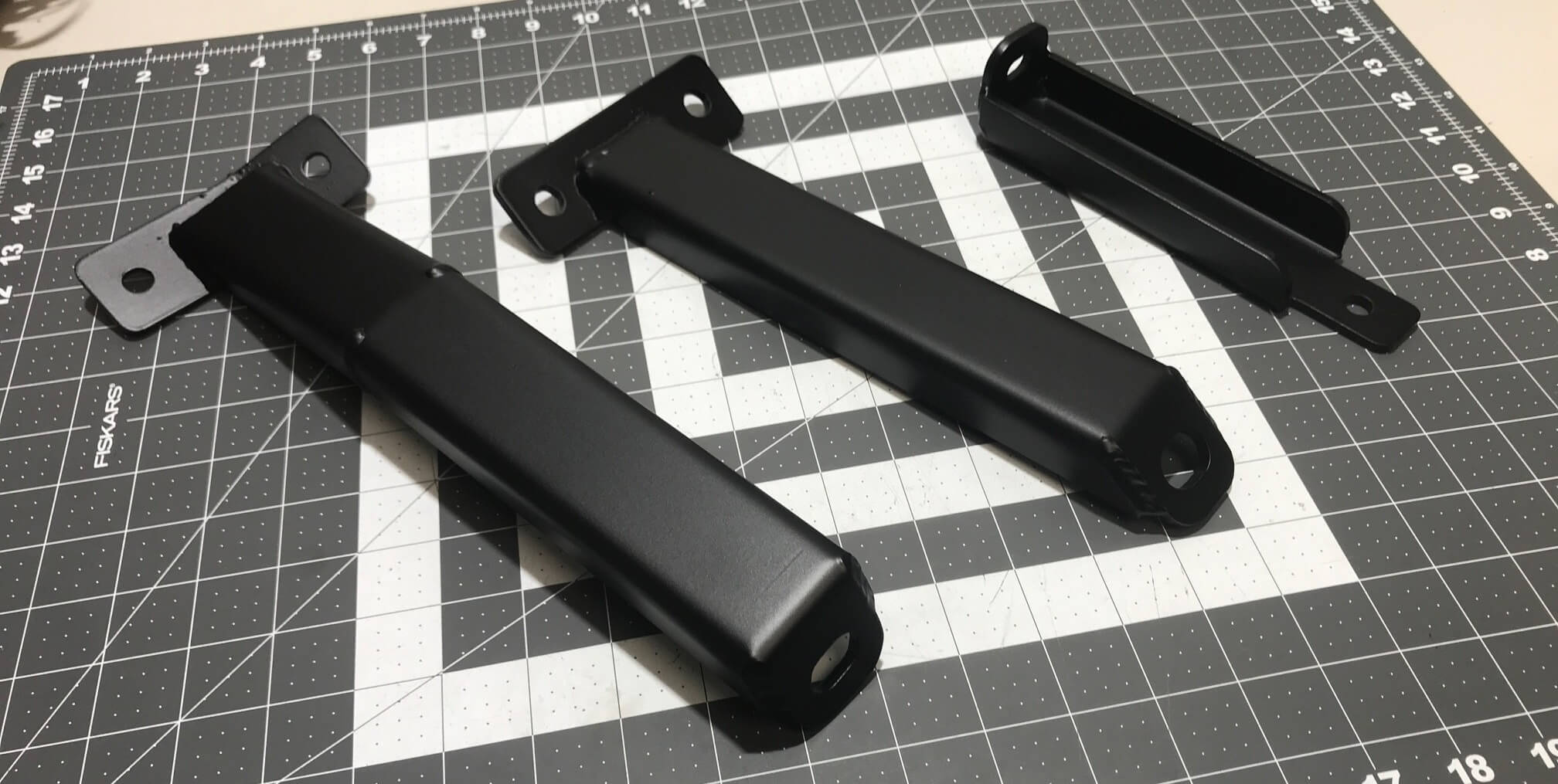 The kit comes with 3 support arms.

These will replace the much weaker arms built into the stock skid. It is much easier to install the arms first and then the skid.

The shortest will go near the rear on the driver’s side. Install all of the arms loosely for now. 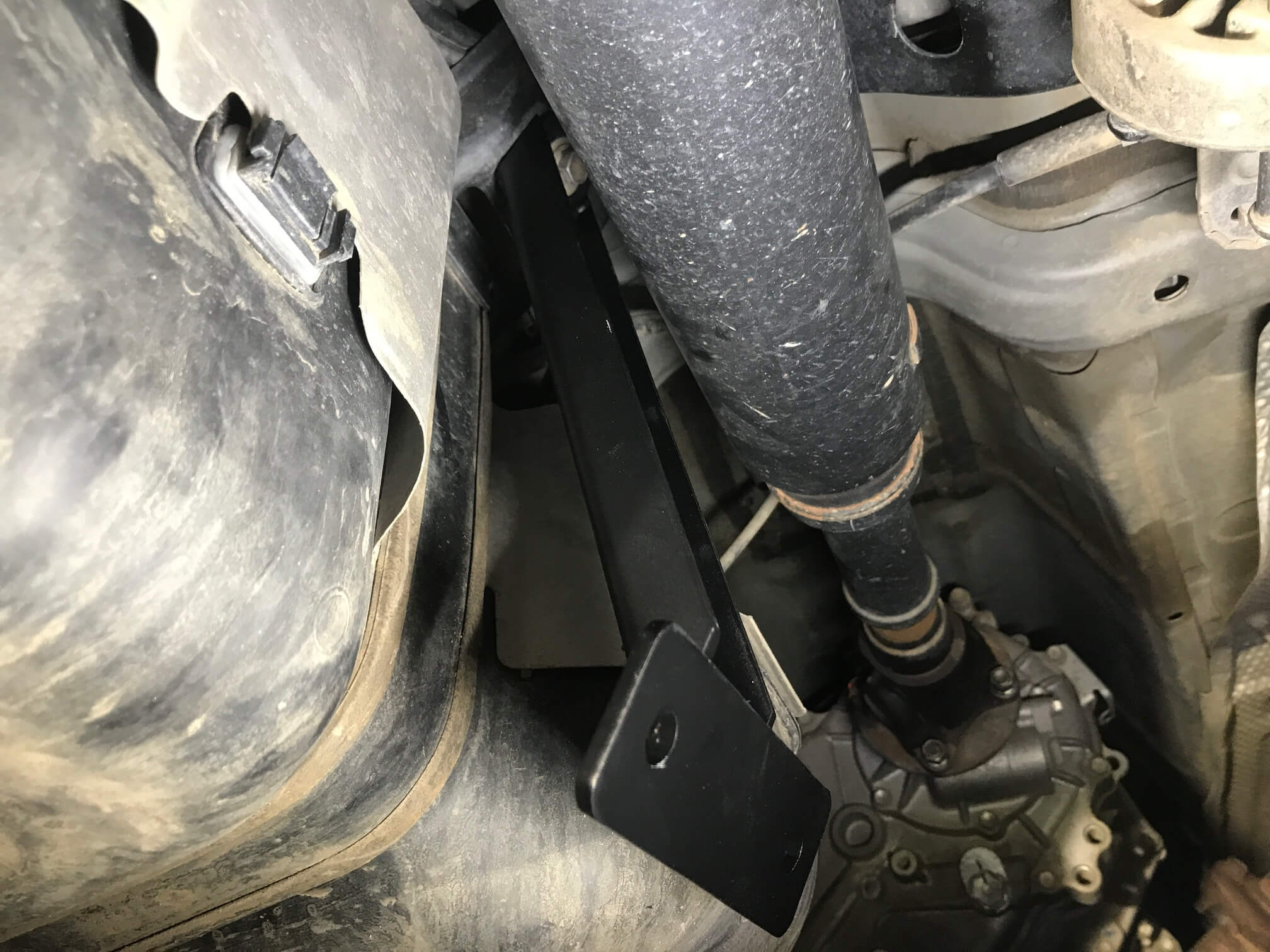 This will be the most difficult to install of the 3 arms due to the small area to work with near the bolt. Loosely install for now.

If you find that it is too difficult to get the bolt in place you can remove the driveshaft, but you will need to make sure all of the bolts are installed to the proper torque during reinstallation. 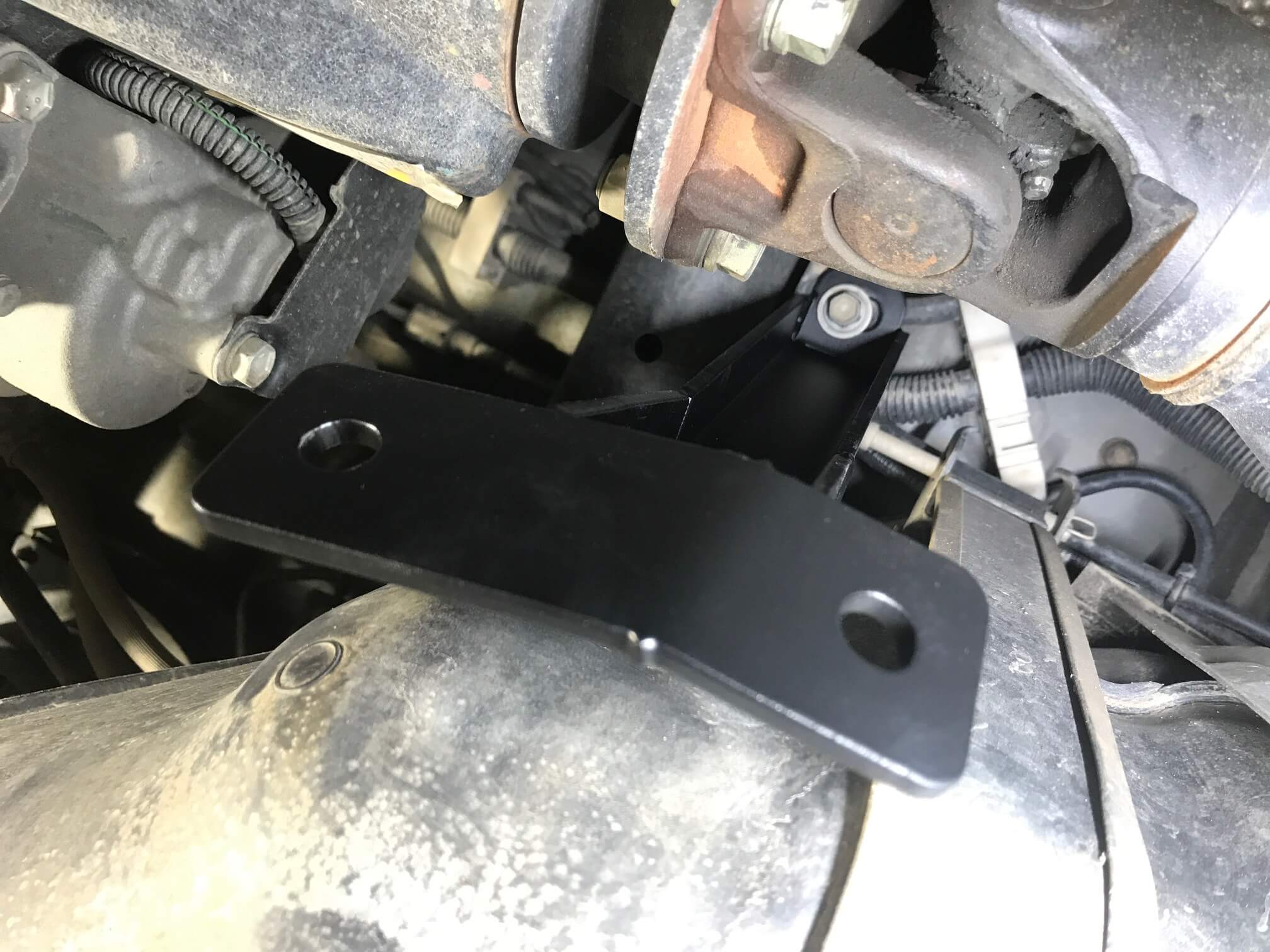 This will be fairly easy with the help of a socket extender. Loosely install for now.

Install the short arm on the opposite side of the gas tank using the same method as the long arm. 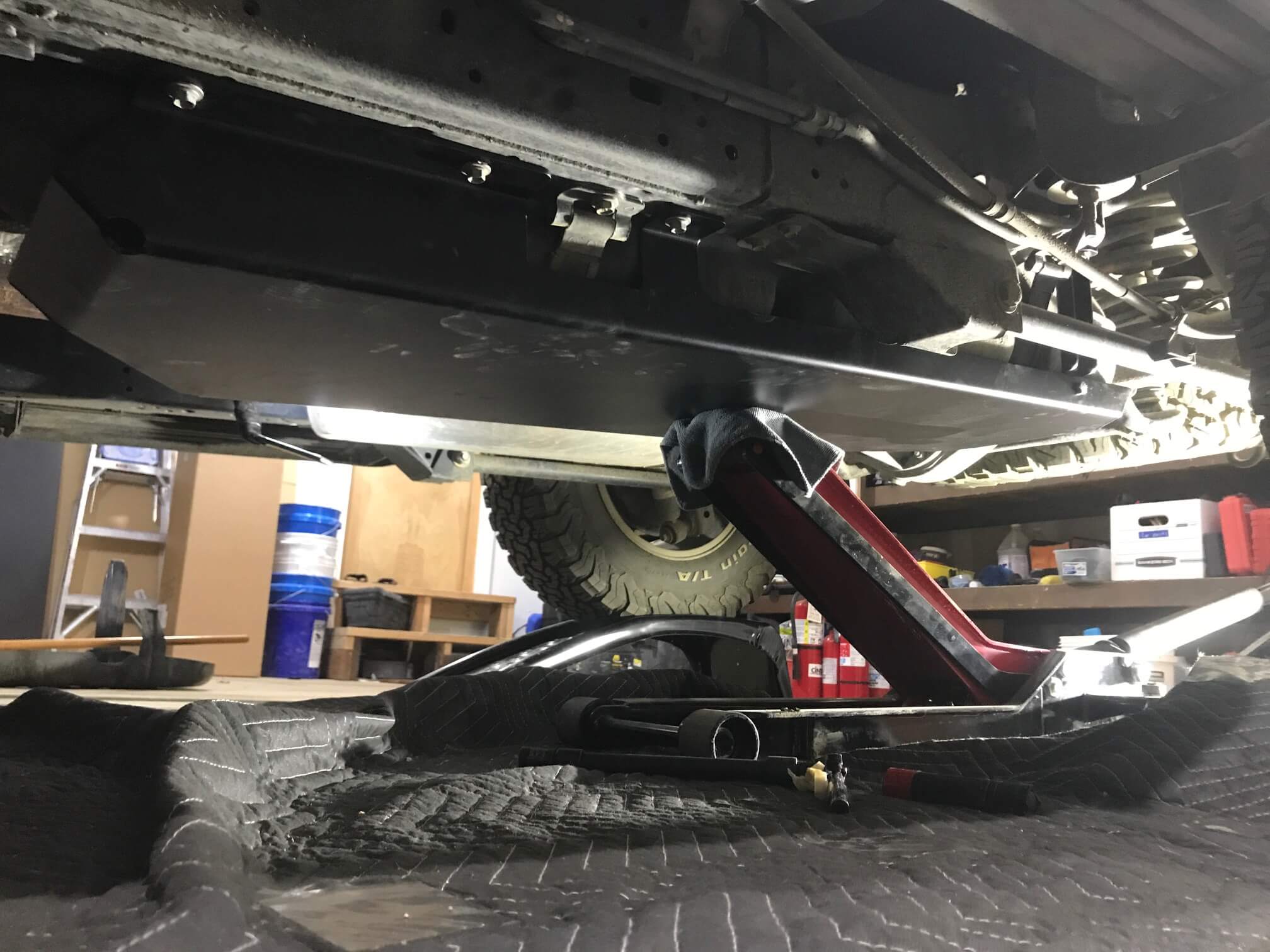 Using the help of a jack, lift the skid plate into place.

Use the 3 stock bolts to connect the skid plate directly to the frame.

Step 8: TIGHTEN UP EVERYTHING 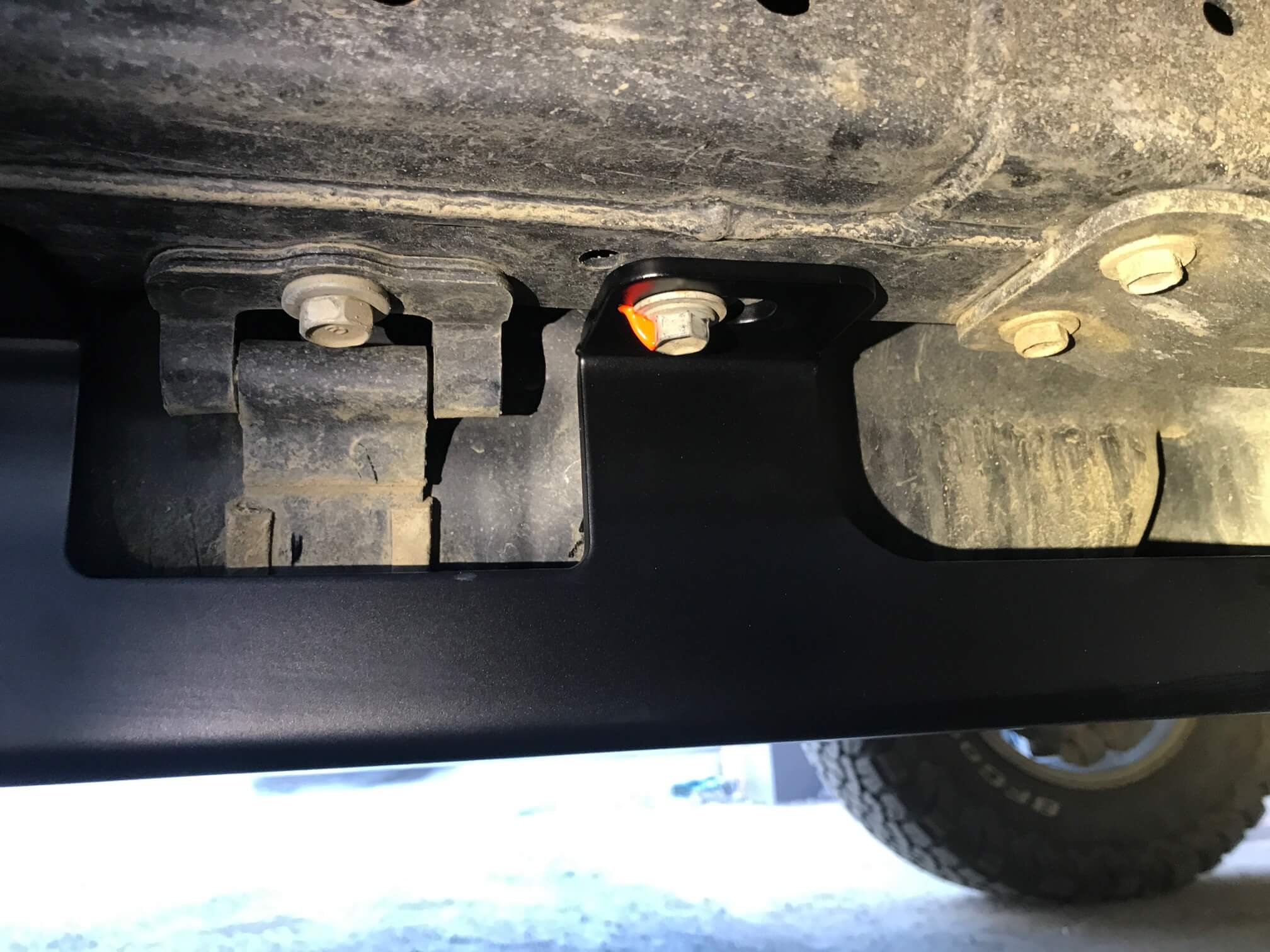 Manually, by hand, tighten each of the bolts at the top of the arms.

Finally, as an optional step, you can add some torque location marking using a sharpie, or even better a product like Cross-Check.

The cross-check will dry in place and make it very clear if the bolts are beginning to loosen up.

This will make checking all of the torques in the future very quick and easy.

I was very impressed with the sturdiness and build quality of the skids and provided arms.

I found the arms to be especially sturdy in comparison to most of the other offerings on the market.

I would feel confident in jacking up the vehicle using the skid. The angled edges are a great addition to prevent the skid from getting caught on rocks.

My only complaint is that the front of the gas tank sticks out and is exposed, but it would take a very tall and pointed rock to actually cause damage.

In fact, the stock gas tank skid actually provides more protection in this area than the upgraded skid.

However, all of the other gas tank skids that I saw on the market have this vulnerability.

This skid plate looks like it fits up much closer to the gas tank than the RCI gas tank skid. How is the gap towards the front?

Great writeup. Do you know if the CBI gas tank skid would interfere with the C4Fab rear differential/e-locker skid plate?

It does not. I have both installed.