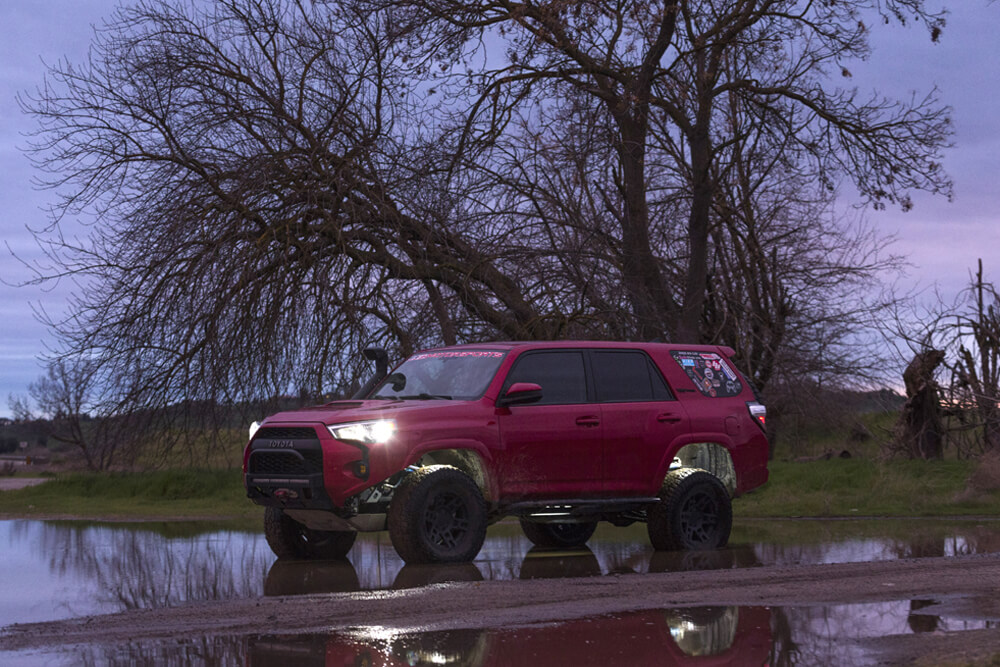 When wheeling at night you think of the usual lightbar and ditch lights to help illuminate the trail and keep you on the correct path, but what about those rougher sections where you need to check the undercarriage to ensure you don’t get high centered or hung up on your diff?

Today, we are covering the Pixel rock lights from Pixel offered by The Retrofit Source. When it comes to the lighting industry, many of you know by now that TRS is a superior name in the game.

They carry this line of rock lights from Profile.

Check out this blurb from The Retrofit Source on Pixel:

We’ve been representing Profile’s products for over a year now and could not be more impressed with the quality, performance, and unique flavor they bring to each of their offerings. Far from a generic Chinese rock light with a new name etched on it; the Profile Pixel rock lights are an all-new design from Profile’s industrial engineering house in California, led by Yoshitaka Ishida. – The Retrofit Source

What are rock lights?

Rock lights are small circular, or somethings square-like lights that are roughly 1-3” in diameter and mount to the undercarriage and wheel wells of your vehicle to provide light at night in areas that normally would be dark, helping expose possible trail dangers.

Why would you want rock lights?

There are a few reasons you may want rock lights, the obvious being trail runs at night. Much like trail runs during the daytime where rocks and other trail obstacles need to be carefully driven over, the nighttime can make these same ones worse.

The reason being you cannot see what is happening under your vehicle as you can during the daytime. By adding rock lights you are able to illuminate the underbody of the vehicle to help you or your spotter guide you over these obstacles safely, without causing trail damage, some of which can leave you stranded on the trail.

Another less popular reason is for more lights in general. If you happen to live in a more rural area, setting rock lights up to work with your courtesy lights can illuminate the area surrounding your vehicle when unlocking the doors. This can help you spot things such as animals, mud, ditches, etc, while getting into or out of your vehicle at night. This can be super beneficial on camping trips.

Are they road legal?

One thing you can’t do with rock lights is run them on public roadways, as they are considered a distraction to drivers and can cause accidents. Fortunately just about everywhere else you can use these, but it’s always important to check your state and local laws before doing so.

There isn’t a requirement of tools for this install as everything will be different depending on the year of the vehicle and where you want to mount the rock lights, how you mount them, and how you plan on using them (switch, sPod, etc), but a few tools that will help are the following: 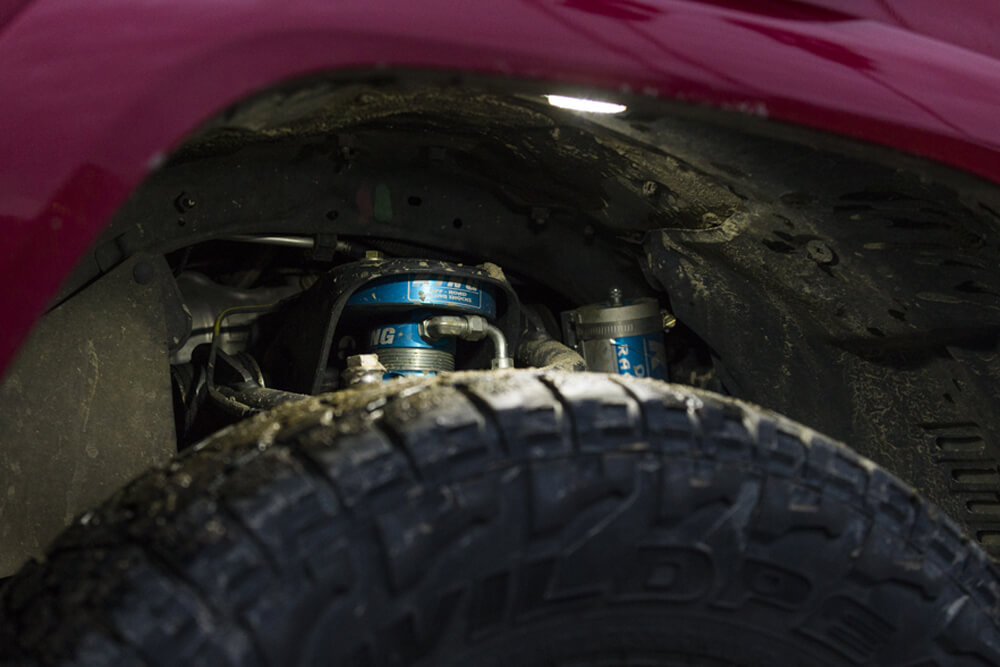 The first thing you want to do is find the area where you want to mount them and make sure you can do so. For instance, if using the magnets you will need to find areas that have direct metal contact to ensure the strongest connection possible. Otherwise, you can risk them falling off during rough roads.

Don’t forget about the wiring and where you will need to run the wire. You don’t want them to be put in a place that is going to require all sorts magic to get them to their power source.

During my install, we installed seven total lights. I chose to put one in each wheel well, one under the hood (because the 5th Gen’s don’t have a hood light), and two on each side of the center of the vehicle.

For a complete step by step install on hood lights, check out this under hood light kit install. 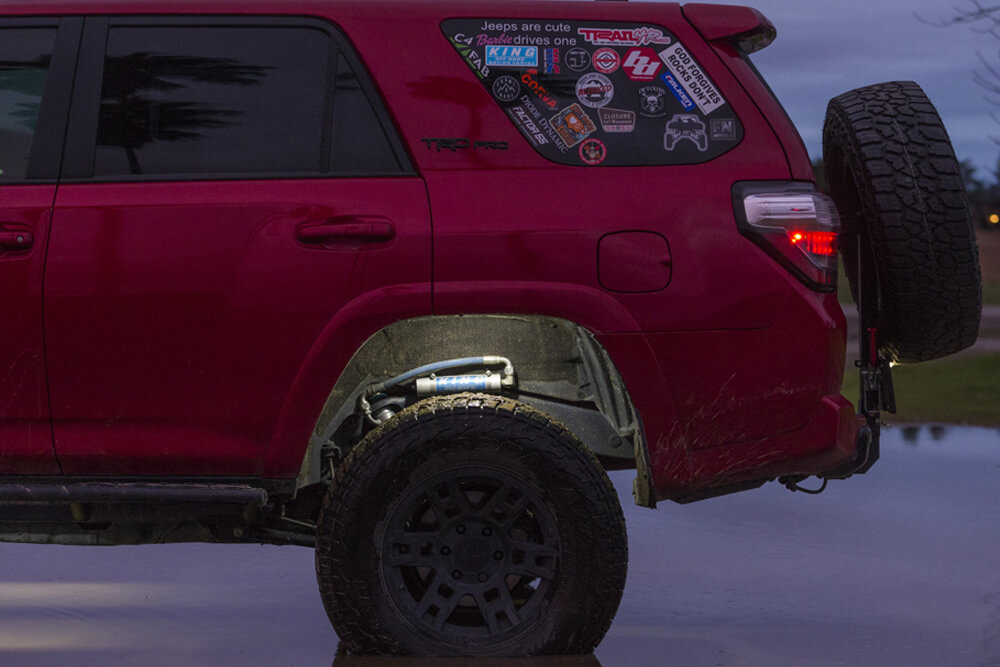 The hood, front wheel wells, and two center lights all were attached via the magnets provided. The fender liner needed some modification to allow the magnet to make direct contact with the metal, but the center area was clearly all exposed metal so no modifications were necessary.

While initially wanting a dead center spot for the lights in the underbody, I chose a slightly angled section that not only provided more light spread, but also protection as it was a couple inches higher up, near the rock slider.

The rear rock lights had to be drilled as the wheel well did not have a fender liner, but rather what appeared to be some sort of spray on protection. This ultimately caused the connection of the magnet to be weaker than I would have liked, so to be sure they would not fall off we went drilled those in.

When using magnets be sure to clean of the section of metal you will be connecting them to, even if it already appears to be clean to remove any debris that could interfere with the connection.

First, you want to decide how to run the wires. Do you want them to run all underneath the vehicle? All via the cabin inside? A mixture of both? That choice is up to you. We did a mixture of both during my install. 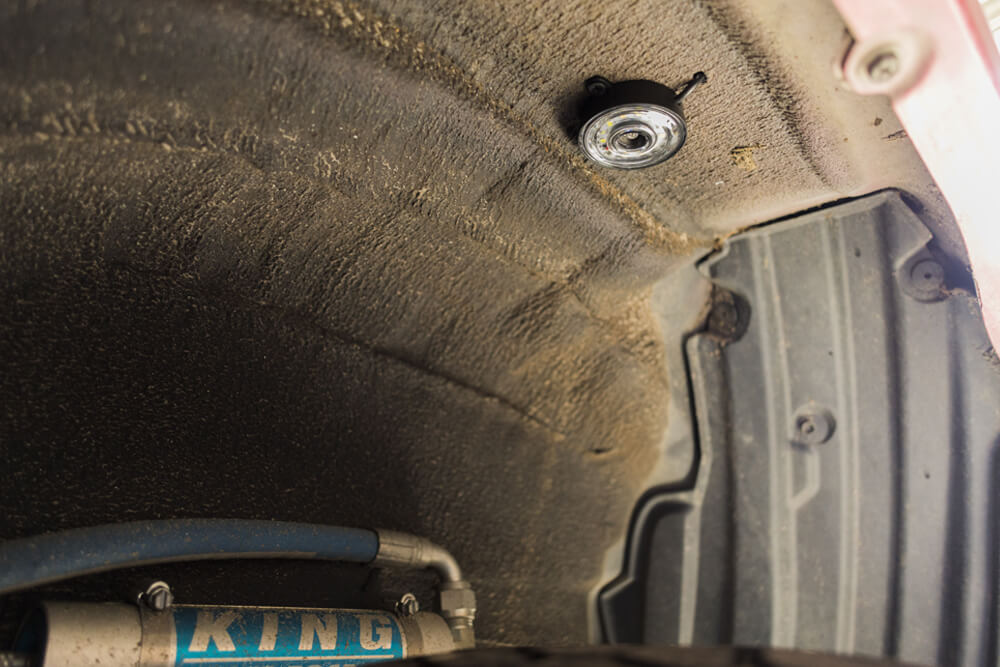 For the two rear lights, we drilled directly through the wheel well into the cabin. Both wires were brought in through the plastic section covering the wheels in the interior. We drilled a small hole at the bottom of each and ran it underneath the carpet towards the drive side rear doors. 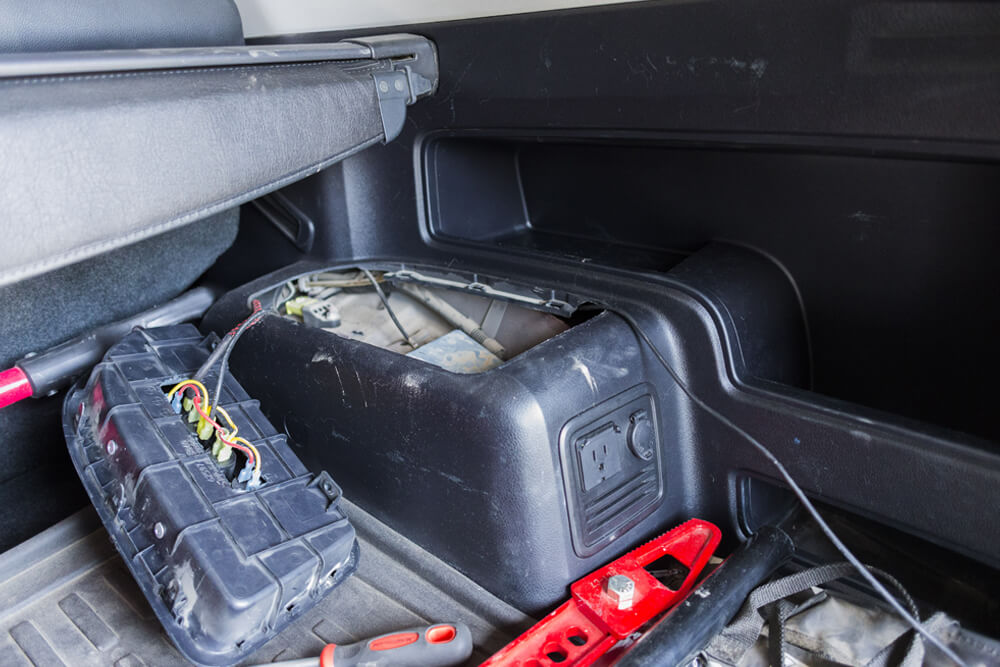 There we connected both of them so we would only have one ground and one power to extend to the front of the vehicle. 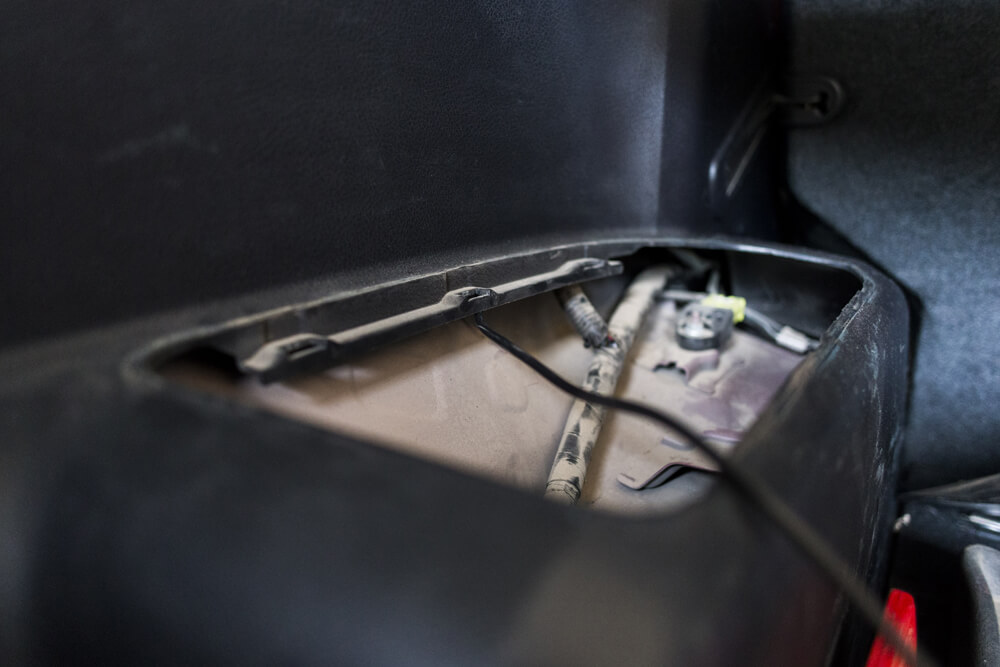 Rather than having four wires running to the front of the vehicle, we had two. Those wires then extended up through the firewall into the engine bay. 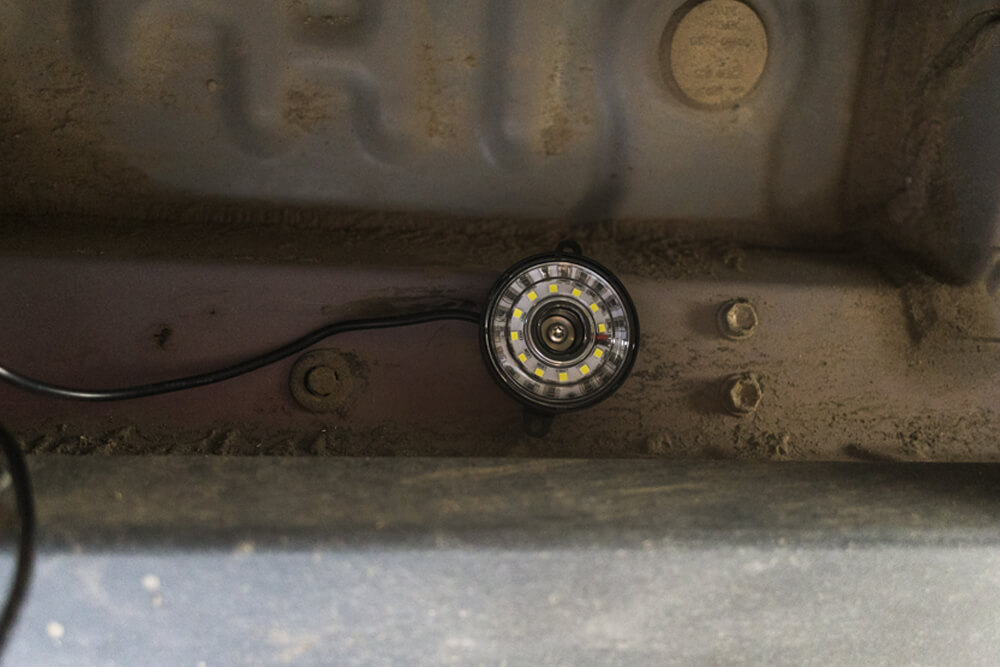 The two center lights on the underbody we chose to run underneath the entire way.

The one followed the lines of the breather kit, while the other ran with other hoses and lines to the passenger side. Each of those were connected with the lights in the front fender wells to help keep the wiring to a minimal, much like the rear lights. 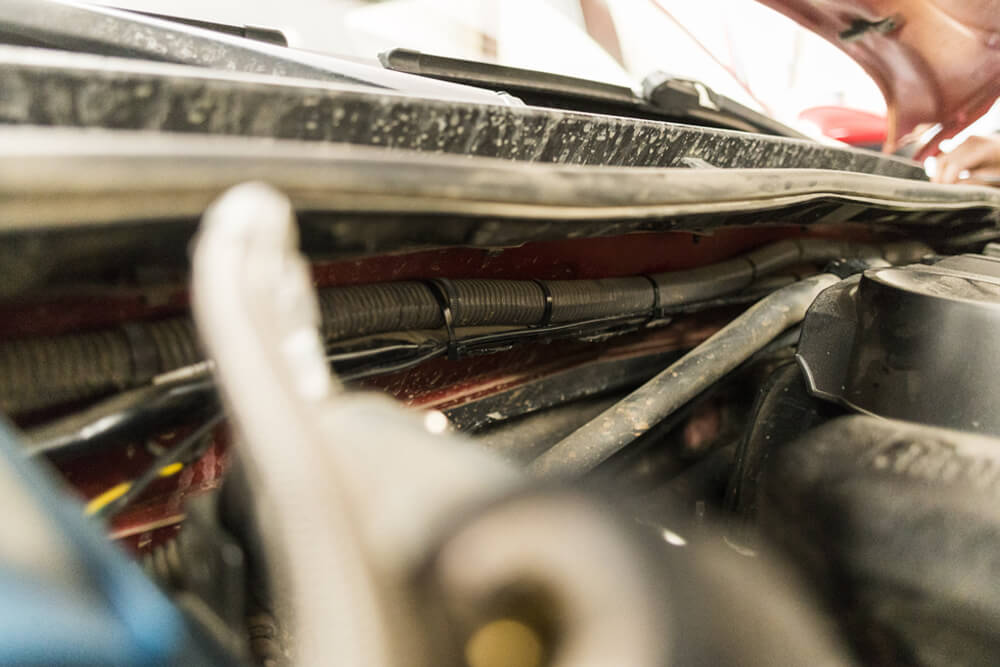 We ran the passenger side along the firewall with the ARB air compressor wiring and other hoses, to meet with the front and rear lights on the driver side.

This is where you can come up with multiple ways of connection. You can either wire all of them together, crimp them, and then run a solo power and negative line out of each into your sPod or switch, or you can run them independently (not recommended as you will need multiple switches or take up multiple sPod locations).

If looking to run them all together at the same time as I am, you can either choose the option of wiring them all together or making it a clean install and use a terminal block. The choice is up to you. Just make sure if you are combining all wires together that you use a wire gauge that can handle the combination of the lines going into it, rather than be overloading where a fire could happen.

You will also want to make sure your line is fused/relayed if you aren’t running them via a system that provides it.

We chose to combine our wires into one for the time being, but will eventually move to a terminal block. We made sure to leave enough line for the terminal block, and then went ahead and cut off any excess wiring we had to clean up the install. After that, we connected the wiring via the sPod system and tested them to make sure they worked.

Once that was confirmed we tightened everything down, silicone any holes that were made going into the interior of the vehicle to prevent any sort of debris or water entering the vehicle, and put everything back together.

How are the Lights?

The lights are extremely bright and illuminate everything very well, though I might consider adding two more lights, one for the rear and front.

Being a full front and rear bumper are in the plans I didn’t want to risk having to remove them, so they will be added in later.

The magnets themselves are extremely strong and without a doubt should hold up to anything you throw at them. It would take a pretty hard impact to get them to move, let alone fall off, and the same goes for the lights as far as breaking them.

My night runs, and late nights on the trail will without a doubt be made easier with these, and I look forward to them being on in those technical spots.

Nice article and good tips on combining the wiring whenever it’s possible.
What do you think, Pixel vs KC HiLiTES?