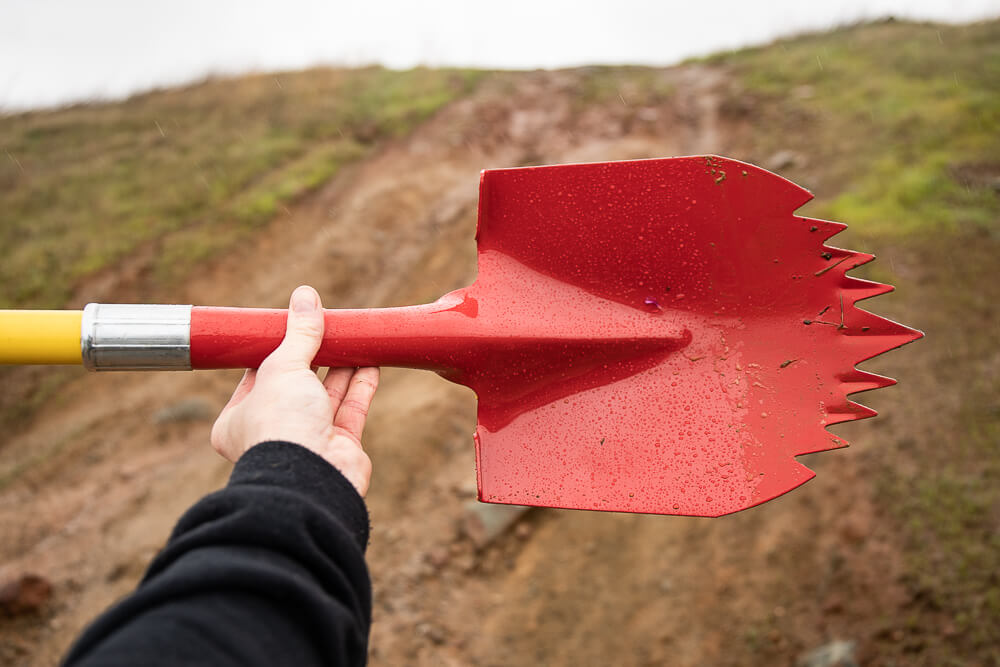 An In-depth Review of the Krazy Beaver Shovel – Quite possibly the best Off-Road shovel ever made but is it worth the cost?

I am sure that is what half of you were thinking… and as I started writing this, I was too.

I genuinely didn’t want to jump on the overland bandwagon but the shovel is pretty damn cool after holding it, feeling it and using it. Unlike many other blogs and websites out there that review stuff, we actually test most of it over here.

In any case, this doomsday scenario, zombie apocalypse prepared unit is pretty rad.

Benjamin Franklin said it quite well – “By failing to prepare, you are preparing to fail.”

Your off-road essentials kit should be comprised of all the things. Things like an axe, survival kit, first-aid kit, or a trusty Ruger 10/22 with back to back duct taped banana clips, and of course… toilet paper.

These things are probably the first to come to mind, give or take. But something that shouldn’t be overlooked or undervalued is the importance of a quality shovel.

The Krazy Beaver Shovel Could Probably Kill Something

Yes, it’s the shovel I suggest should be in everyone’s “end of days” tool kit and it’s a mere coincidence it also happens to be amazing to bring along when your exploring and wheeling.

Krazy Beaver Tools was launched out of Rio Rancho New Mexico by a Law Enforcement Officer named Jason. Since Jasons’ job entailed patrolling remote areas in his SUV he needed a shovel that could perform in the most extreme situations and get the job done.

In 2012, the concept of the Krazy Beaver Shovel was born and appeased those needs perfectly.

5 Reasons we dig the Krazy Beaver

This review will highlight the top 5 reasons we dig this shovel and why any serious roadie shouldn’t be left without it. 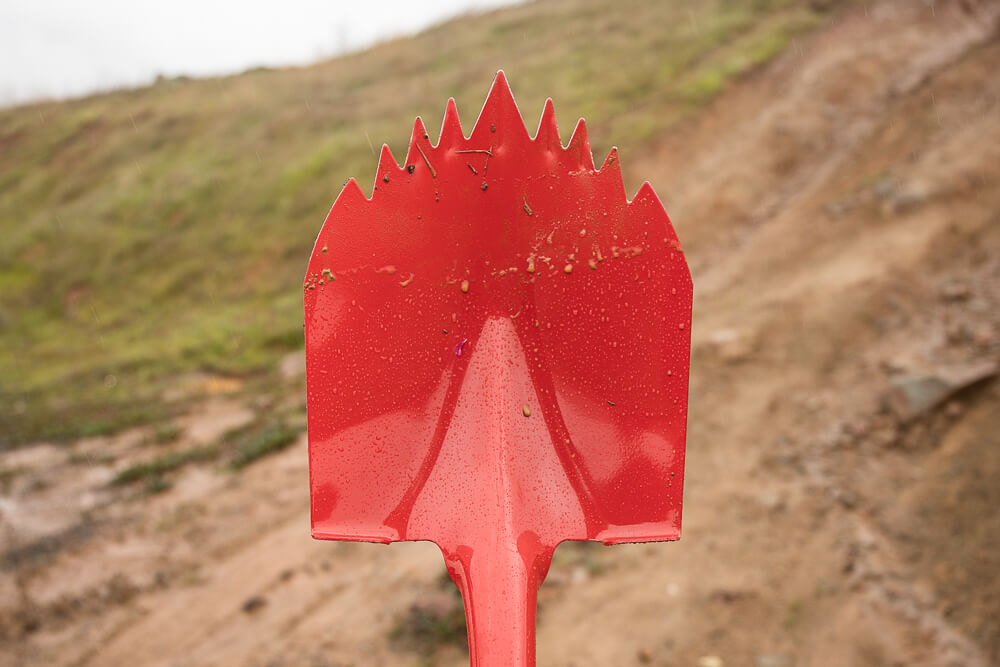 How do you justify spending over $100 on a compact off-road shovel? When it’s got 9 deadly spikes and powder coated red.

I walked into my office and there it was, waiting to be put to the test. I saw the blade and was like “daaaaaaaamn, that is badass”.

This thing is burly, to say the least.

The red-spiked tip looks like it would be just the thing to have in the event of a zombie apocalypse because you could just run through a crowd of zombies stabbing all of them while escaping at the same time.

This blade is constructed of heavy-duty 14-gauge heat treated tempered steel and is about two times thicker than your conventional shovel at home. The Krazy Beavers teeth are reinforced to be bend and break resistant and its powder coated to prevent rusting, although I am sure time will tell.

As I’m sure you’re imagining, the blade does more than just look cool, it is extremely useful.

To my surprise, the blade performed very well in the snow. It was able to slice through hard sheets of frozen top layers while still offering enough blade face to move mass loads. It broke through sheets of ice with a few thrusts of momentum and even broke through layers unexpected.

The Krazy Beaver outshines all shovels in this category. With its penetrating spikes, the Krazy Beaver is able to break through soft to solid muddy terrain, grabbing a medium to large rocks on it’s way up. It features a full-size shovel digger-blade that can move enough ground to get you out.

When you need to move rocks to potentially aid in stepping up or down, this is going to be your shovel of choice. The full-size digger-blade allows you to scoop full loads all while not putting a ton of strain on your back like some smaller, more compact shovels might.

Although we have no first-hand experience in the sand yet, I am looking forward to the challenge. And, with everything we have seen from this shovel so far, it should have no problems tackling the dunes or the beach.

It’s a full-size shovel blade with a compact shaft and enough teeth to scare the wolves away at night. It’s honestly hard to hate on this well thought out design. Form follows function with this blade.

Cheers to Jason and the KB team. It’s a keeper.

#2 Handle: A Lightweight Handle with a Fiberglass Shaft 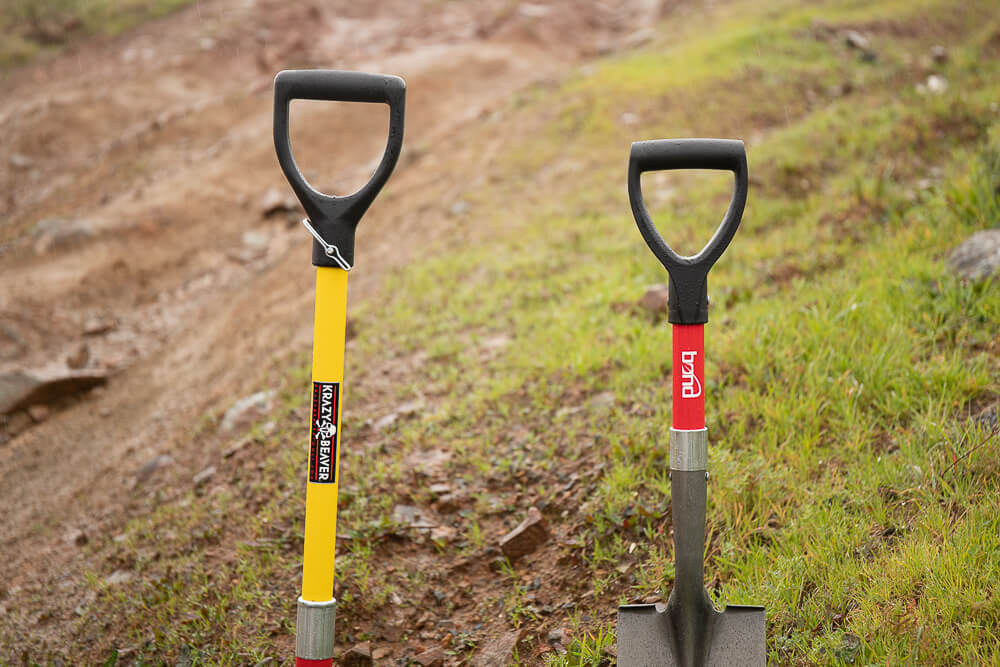 When you wrap your fingers around the handle and grasp the Krazy Beavers potential, your first thought will likely be of how sturdy it feels. The Krazy beavers handle is a testament to this shovels ability to handle any task its employed for.

The black handle is lightweight and extremely strong. It’s head to handle connection is solidly mounted to a 14-inch fiberglass reinforcing core to ride out intense circumstances.

As if all that quality construction isn’t enough, they even included a hollow section under the handles “D-grip” to store things like matches, hooks, batteries, pocket knife and whatever other survival accessories you can stuff in there.

This is an awesome feature because it allows you to basically turn this into a multi-purpose tool due to the amount of stuff you can store inside of it.

But, we tried to throw a few things in there like a Bic lighter, gloves, and a survival water stick, however, they did not fit. That might give you an idea of what is, and what is not possible.

#3 Material: An All-American Design Worth the Investment 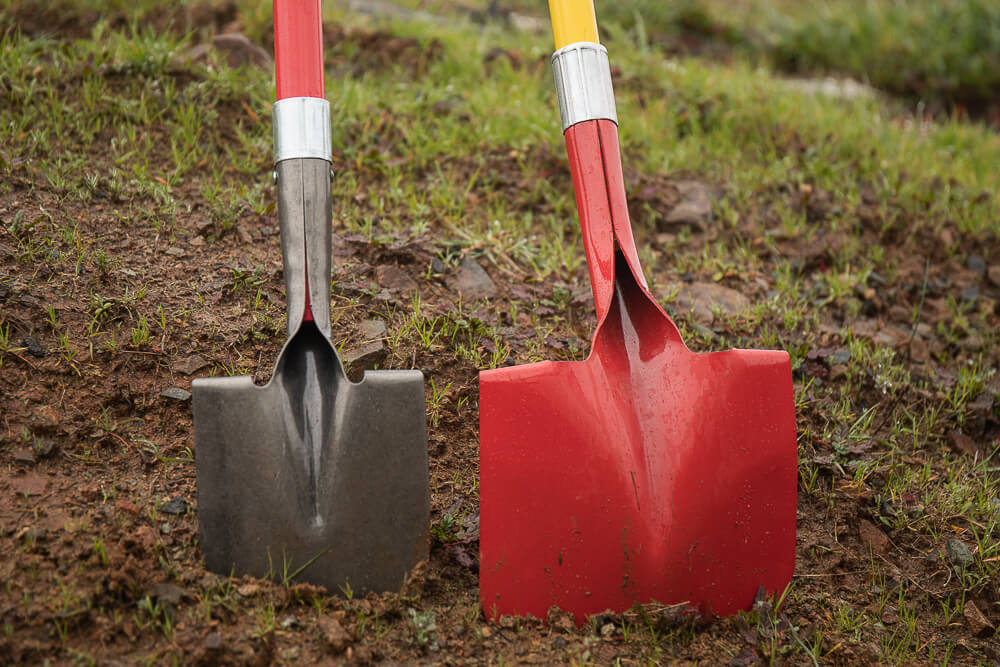 The innovative design and materials used to construct this off-road shovel are what really sets it apart from the competition.

Firstly, it’s American made which is something we attempt to always support.

The shaft is made of lightweight but extremely strong fiberglass offered in both high visibility yellow and black.

Reinforced teeth on the blade help to prevent bending and breaking.

Some may initially see it priced at $79.99 and think it’s too much to spend. But when you realize this could be a tool that will suffice for all your shoveling needs for the rest of your off-roading needs, it might make a worthy investment depending on your specific needs. 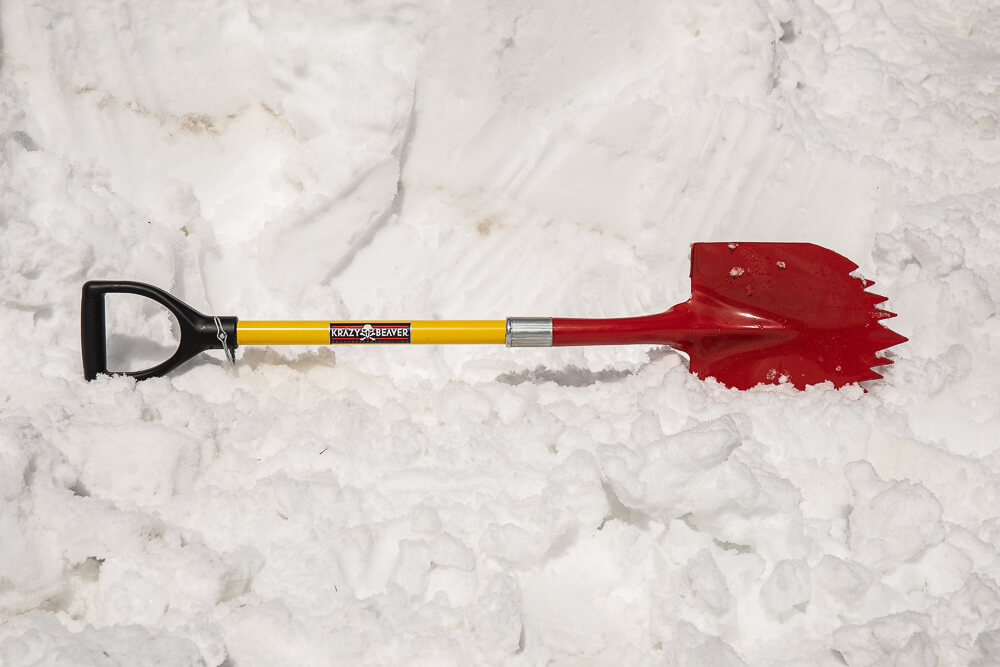 As I mentioned previously, this off-road shovel could serve you well as a zombie killing weapon.

All jokes aside, I’ll go out on a limb here by saying this is easily the most functional and useful shovels brought to the attention of many industries. A shovel with spikes is pretty epic.

It measures in at 40 inches in total length which makes it useful in a wide variety of applications.

This could be seen as a problem from some as the minimalist may prefer a more compact shovel like the Rhino USA folding shovel.

The length of this shovel is what I really like, though. The Krazy Beaver is damn near a full-size shovel which makes it’s functional and familiar. This functionality and familiarity lead to ease of use. Ease of use leads to less stress on your back.

Digging is done much more efficiently due to the spiked tip (pro-tip: a file can sharpen the teeth and make them even sharper).

You can really cut through most terrain like butter with the teeth of the Krazy Beaver Shovel.

Ever require the use of a pick-ax to get through roots? Well, you won’t need to carry around that extra tool anymore because you can penetrate through tough roots effortlessly with this shovel.

Because this shovel is so effective, you don’t need to enjoy its benefits off-road only. You can also get great use out of it other purposes like camping, gardening, and hunting. 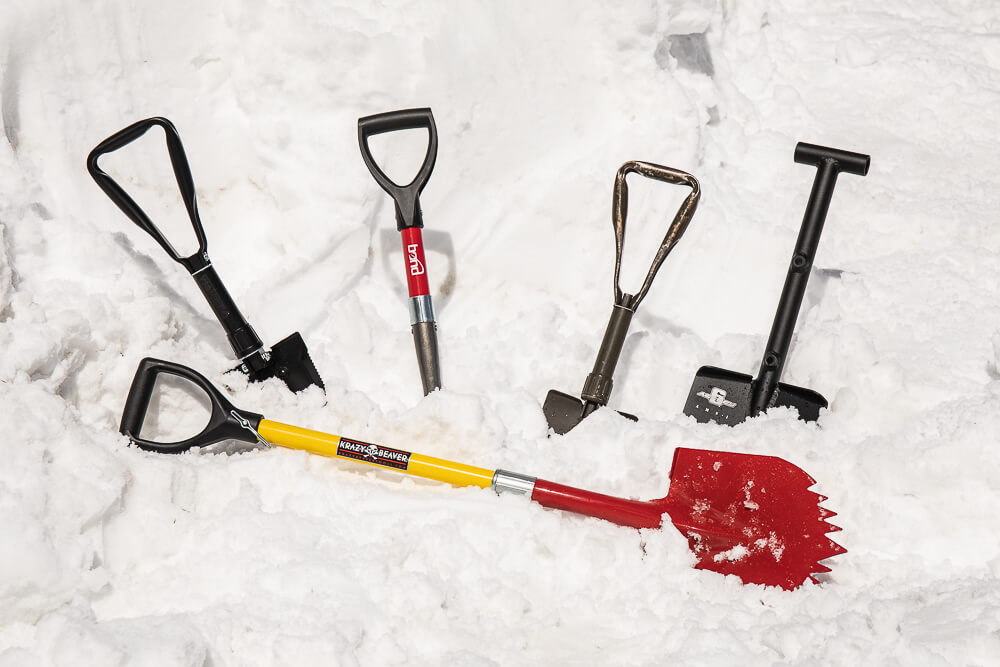 The Krazy Beaver has more than just that “cool factor”.

When you look at it, some might say “wow that’s gnarly looking,” some might think its sexy. But, no matter how you perceive it one thing is for sure, it’s a damn impressive looking shovel, more importantly, it serves its purpose.

It really compliments whatever roof rack its attached to and you know that whatever rack its sitting means your prepared. If you want to be ready for anything, throw a Krazy Beaver shovel on your rack.

So, is the Krazy Beaver Shovel right for you?

The Krazy Beaver Shovel is a premium shovel with a broad spectrum of uses.

I like the shovel because its compact in form but still serves as a somewhat familiar full-size shovel. It’s not hard on your back like other smaller compact shovels and it flat out gets the job done.

No matter what terrain you are on, if you have a need for a shovel, this beast will get the job done.