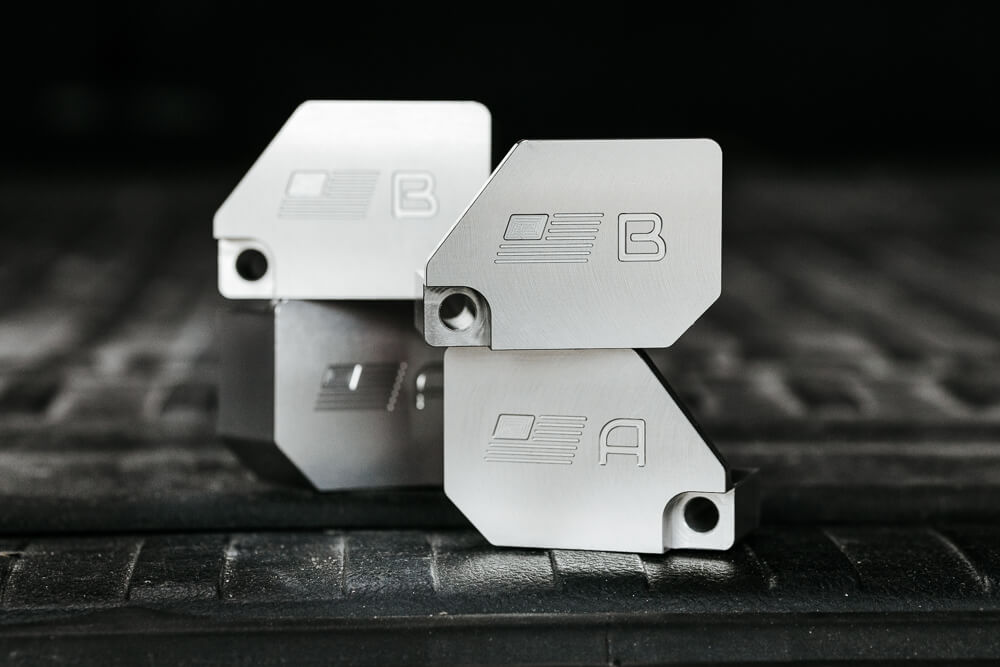 Like several critical parts of the 4runner’s undercarriage, the ABS Speed Sensors and harnesses are particularly vulnerable to damage from rock, debris, mud, water, ice…even critters with appetites for wiring.

If one of the ABS sensors or harnesses becomes damaged or broken you will have about 6 different dash warning lights blinking at you, but more importantly (in most circumstances) you will lose the ability to engage the 4WD System and lose the functions of Traction Control, E-Locker, Multi-Terrain Select, and ATRAC as well.

That’s a big problem if you are mid-trail and need 4WD or any of the aforementioned features to get you where you need to be. Enter the need to for some armored protection of these little speed sensors and their harnesses.

At a minimum, a broken ABS Speed sensor or wire harness can become a very costly repair amounting to 3-5x the cost of protecting your ABS Speed Sensors with a set of ABS Guards. 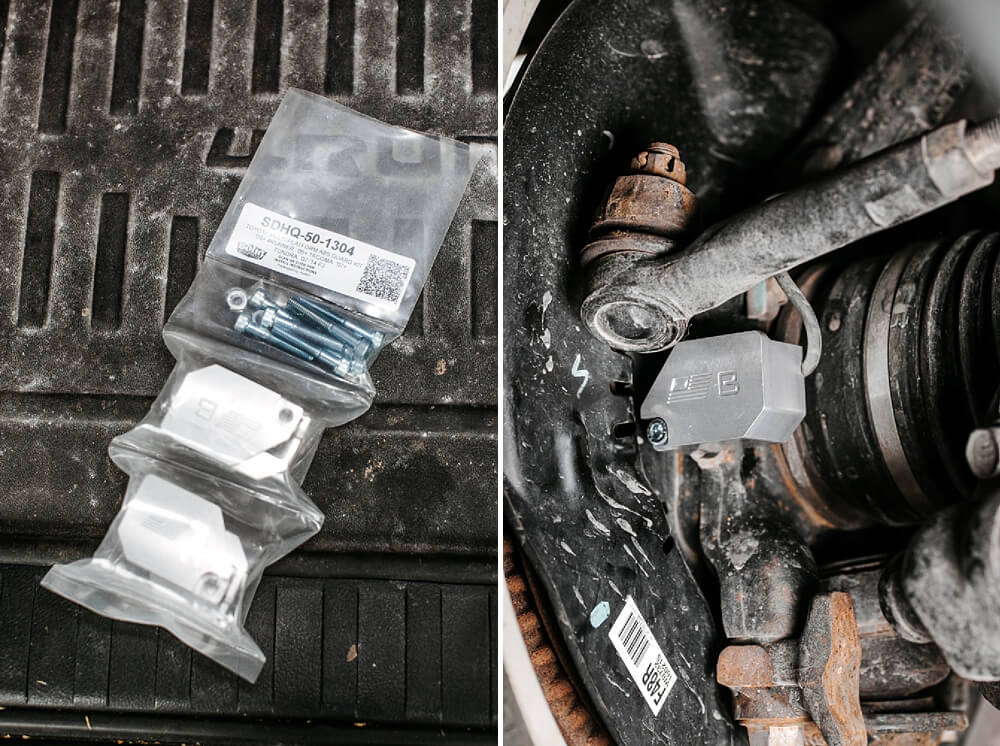 After one of my ABS sensors became damaged, I came across SDHQ Offroad and a product they have made for several years. SDHQ makes a full set of ABS Sensor guards in billet aluminum to protect these vulnerable sensors and ensure your ABS system stays fully functioning both on and off the trails.

Before we talk about the ABS Guards, lets gain some understanding about what ABS is and how it works. Modern forms of Anti-lock Brake Systems (ABS) have been around since the 1970s and mostly function in the background as a safety feature. If you’ve driven a vehicle in the past 30-50 years, chances are it was equipped with ABS.

Several types of ABS systems exist depending on what types of brakes the vehicle has, but the common components basically include a set of ABS Speed sensors at each wheel (sometimes referred to as “ABS Sensor”), valves, a pump, and an ECU.

When functioning properly the ABS system has a few different applications, it prevents the brakes and wheels from locking when braking hard, panic breaking, or encountering slippery surfaces.

The lesser known fact is that the ABS also plays a role in Traction Control and various features of the 4WD System such as Multi-Terrain Select Modes, ATRAC, and Traction Control. In short, ABS ultimately increases traction between surface and tires to assist both braking and accelerating when on unstable or slippery surfaces.

To simplify things, ABS works as follows… ABS speed sensors sit inside each wheel near the bearing, constantly measuring the rotation speed of each wheel and send the information to the ECU.

If any wheel begins moving slower than the vehicle’s speed (as it would during a hard brake or panic break situation), the ECU should engage the ABS pump/valves and reduce the braking pressure in intervals (referred to as Cadence Braking) to prevent the wheel(s) from locking-up and going into full skid.

As a result, ABS usually reduces stopping distance and allows the driver to continue safely steering the vehicle while braking.

What you may not know is that ABS and its sensors also play a critical role in Traction Control Systems and even overlap into the function of the 4WD system.

If one or more tires lose traction on a slippery or unstable surface, its the ABS Speed sensor that detects this increase in wheel speed and engages Traction Control.

You may not realize that the ABS Speed sensors are hard at work as you are wheelin’ your truck around on unstable or slippery environments.

A properly functioning ABS system is critical in off-roading environments if you keep Traction Control engaged, use ATRAC, or use any of the various Multi-Terrain Select modes that can be found in the Trail and TRD models.

If your ABS Speed Sensor is broken or damaged, all your 4WD systems basically become disabled. 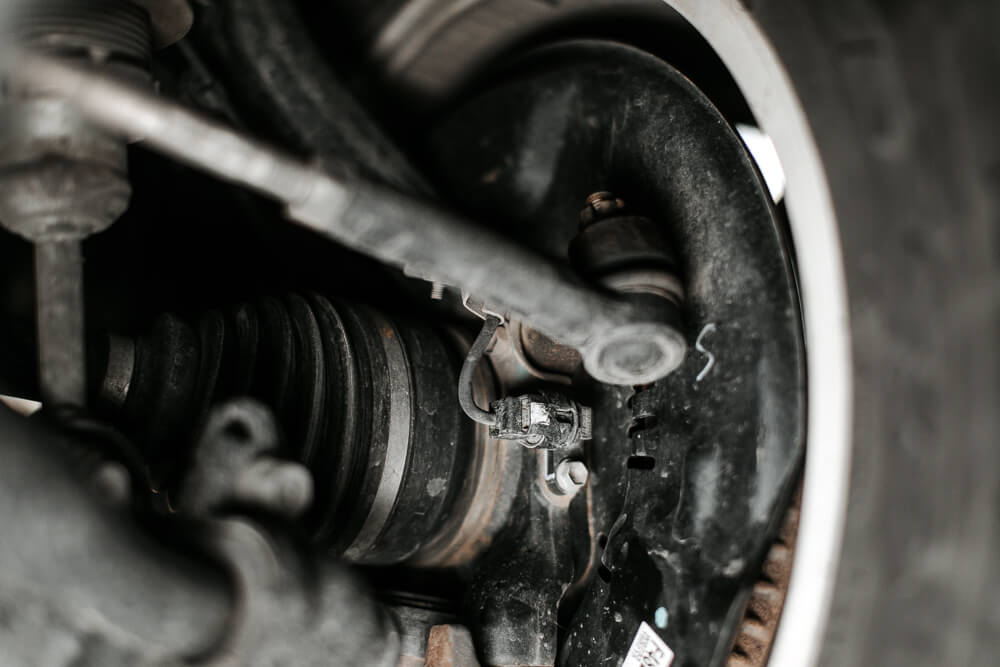 In the front of the vehicle, you can see the ABS sensors are located right on the wheel and they’re particularly vulnerable as they sit facing forward directly exposed to any oncoming debris.

In the rear, they are located on the inside of the wheel again facing forward and sitting just under the shocks. A little less exposed, but still exposed to that rogue rock or stick none-the-less!

SDHQ Billet ABS Guards are an easy bolt-on install and cover both the ABS sensor itself and wiring harness protecting them from oncoming debris.

The product includes hardened 12.9 hardware that will replace some of the OEM factory hardware.

They are milled out of 6061 Aluminum SDHQ states the install should take no more than 30 minutes.

From SDHQ, these guards are compatible with:

On the Driver’s side, locate the ABS Sensor and remove the 10mm bolt. The plastic ABS sensor will easily pop out of the wheel, but it is unnecessary to remove them unless they need to be replaced. 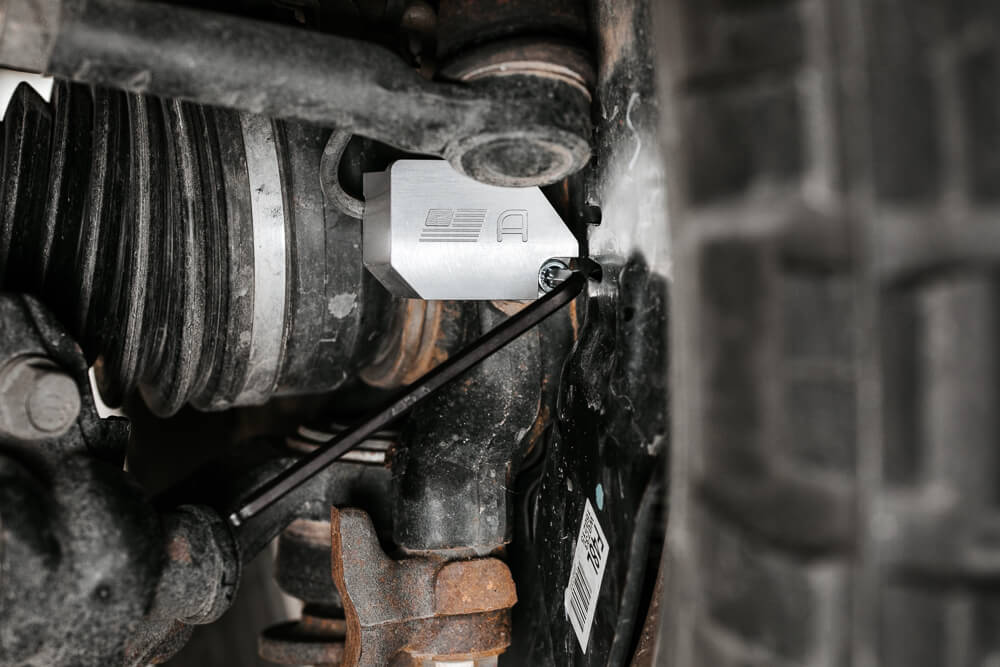 Step 3 FRONT: Repeat Steps 1 and 2 on the passenger side 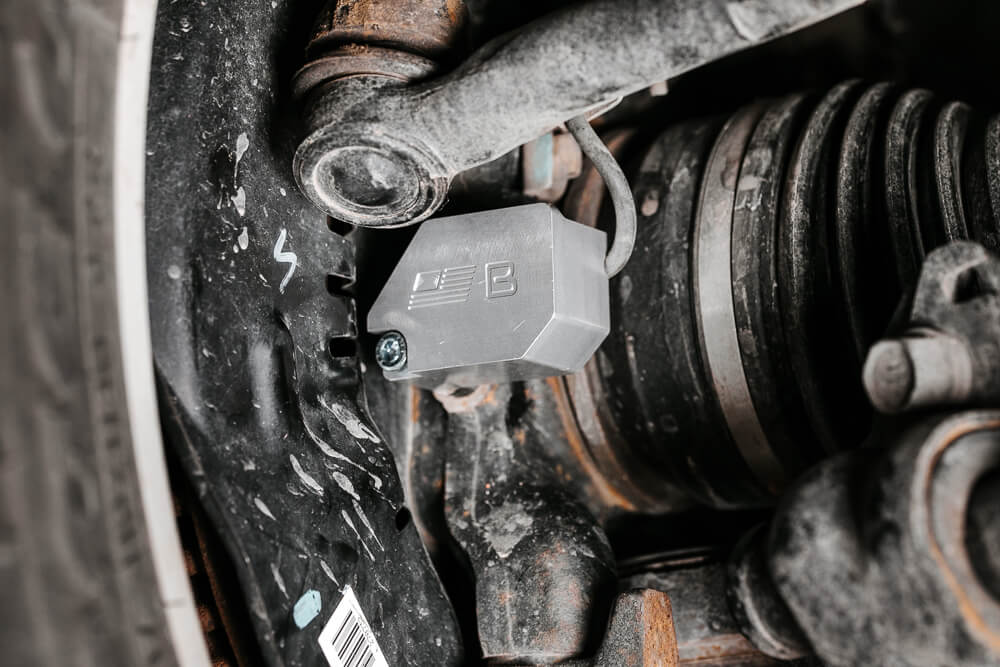 NOTE that the guards are labeled A and B… A is for the Driver’s side, B is for the Passenger’s side. 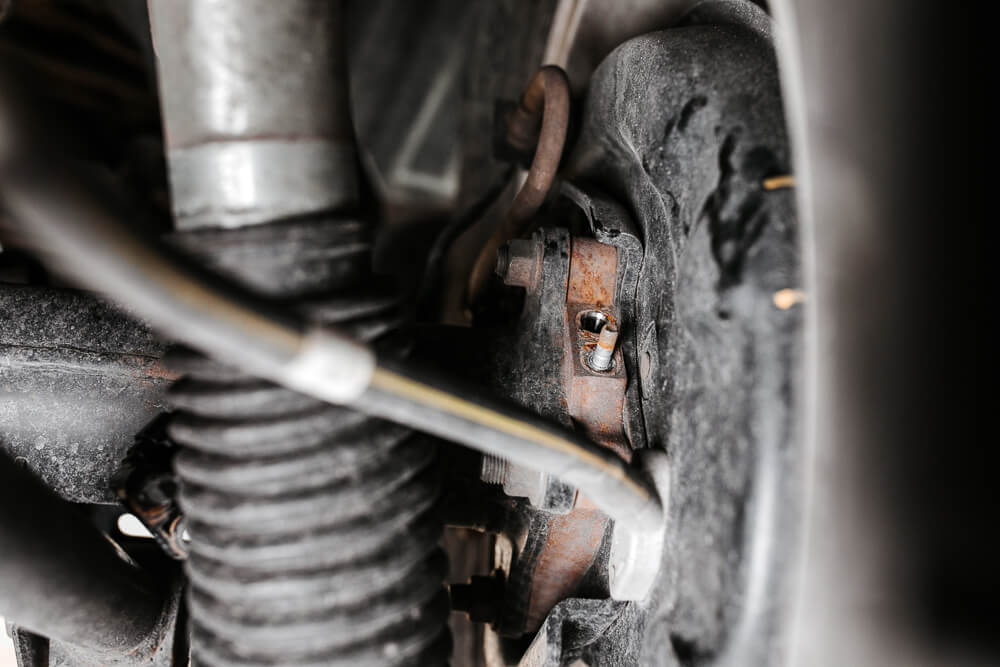 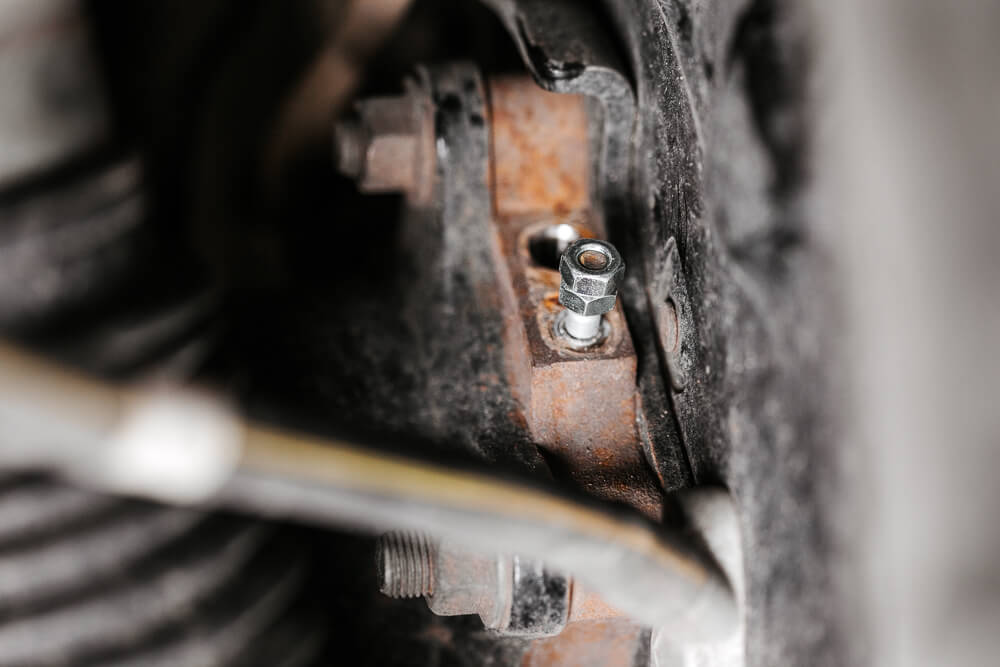 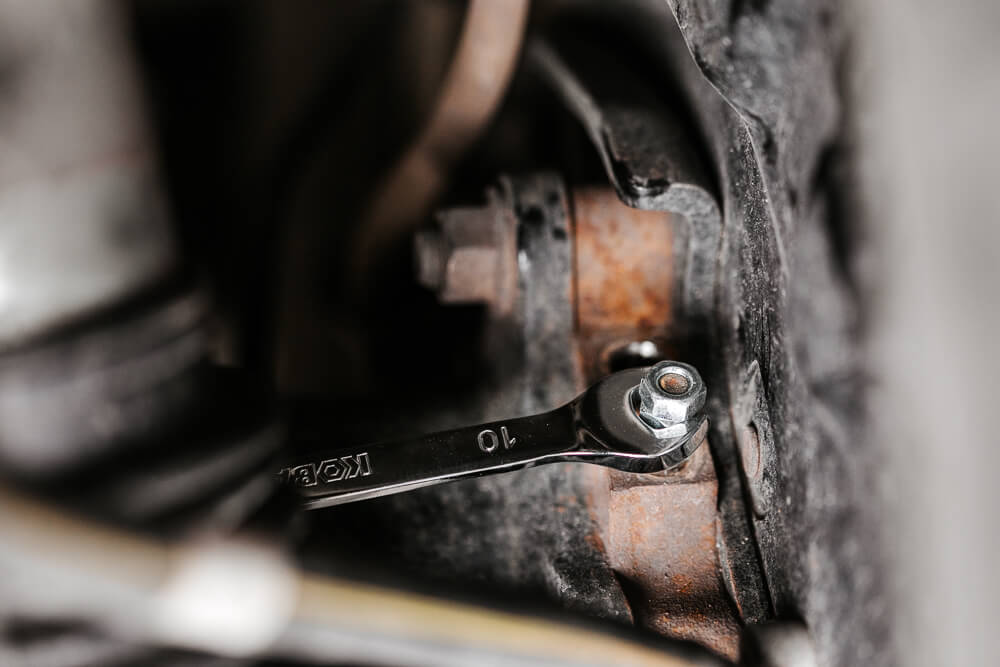 This is done using the two SDHQ provided 10mm Nuts, a 10mm wrench and a 10mm socket wrench. SDHQ install instructions explain how this is done, its simple: 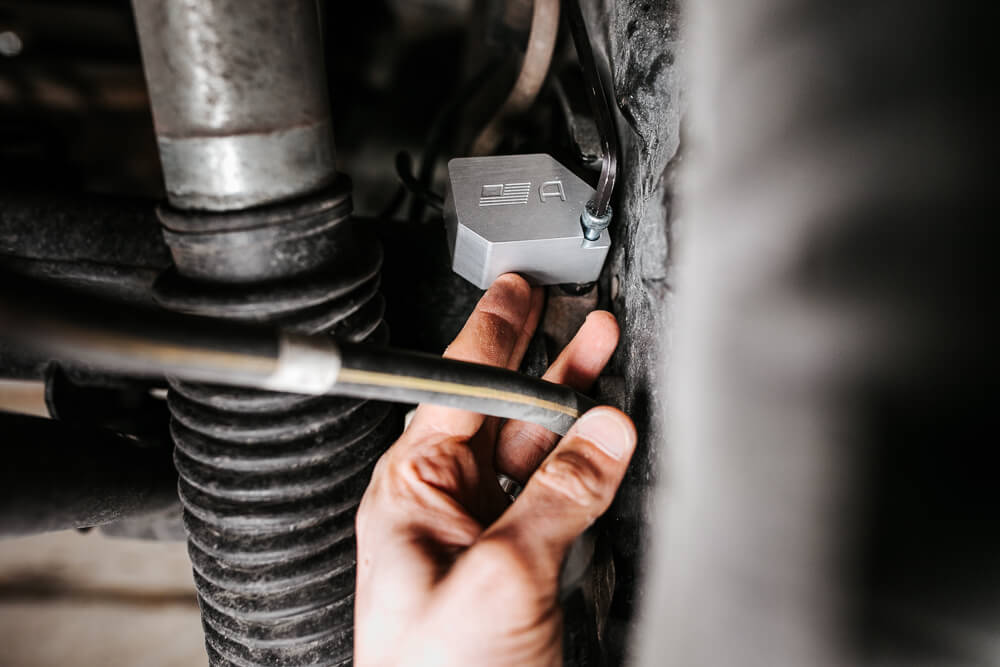 With the factory stud removed, place the ABS sensor back into its hole and install the Sensor Guard using the provided M6 Bolt and a 5mm Hex Key.

SDHQ install instructions call for using the 40mm M6 bolts for the 2010+ 4runner which worked fine for me in the FRONT, however, I found that on my 2016 4R TEP the 40mm M6 bolt was too long for the REAR and I could not tighten down the rear guard secure enough.

I reverted to using the SDHQ provided 35mm M6 bolt for the REAR and that worked fine. 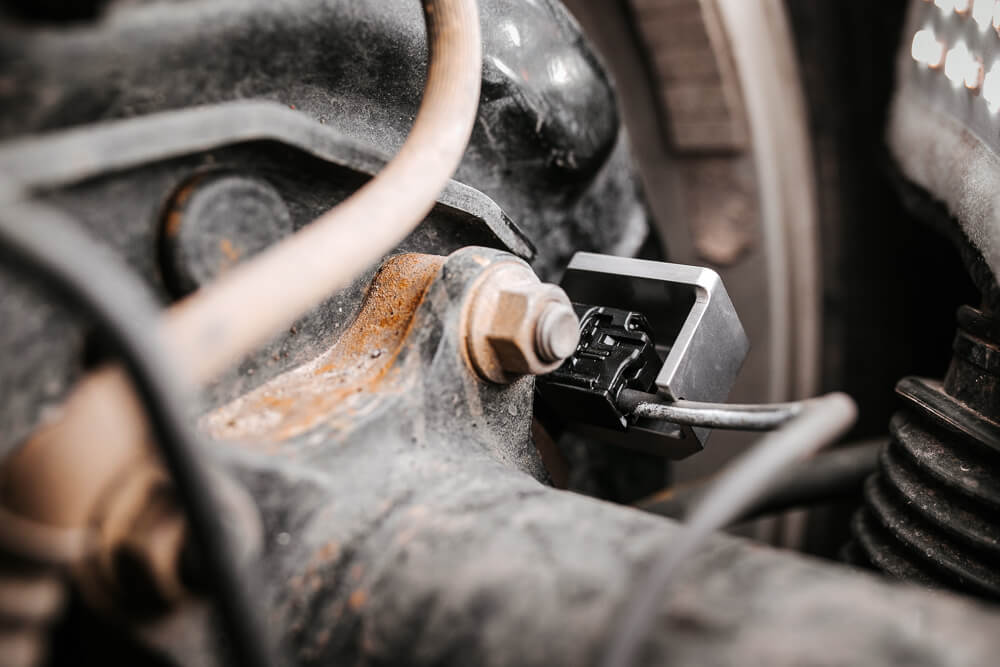 Repeat steps 1-3 on the passenger side.

Properly installed SDHQ ABS Guards should protect your ABS sensors from unnecessary exposure and damage while out on the trails and on-road too.

At about $100 for a set, and 20 minutes of install time, this is a pretty easily affordable “insurance policy” to ensure you don’t lose 4WD capability, Multi-Terrain Modes, or Traction Control due to a damaged or broke ABS Speed sensor/harness.

Photographer by trade, 4Runner for family adventures. Based in Kansas City, Missouri, USA.

The links don’t work. This is the link to the 4Runner version.

Who else came here to this after they smashed their speed sensor and needed it to be replaced?

Also is there anything to protect the wiring harness?

I had the infamous code P0500 I did not delete the code, all the lights went away on their own everything as far as I can tell is functioning fine 4wd etc, I will definitely purchase these guards, any idea why it would happen and then go away? it happened while I was changing my front and rear diff fluid. Any info I will greatly appreciate.

Hi Miguel, im not familiar with that code. I can say before I had a total failure, I did have intermittent warnings too just like you…intermittent warnings could occur if the harness, clips, or sensor itself is truly broken but not fully broken. If its broken but intermittently still making good electrical contacts the warnings will disappear and reappear. After I replaced my rear harnesses, I havent experienced any further issues.