Should you Supercharge your 5th Gen 4Runner? 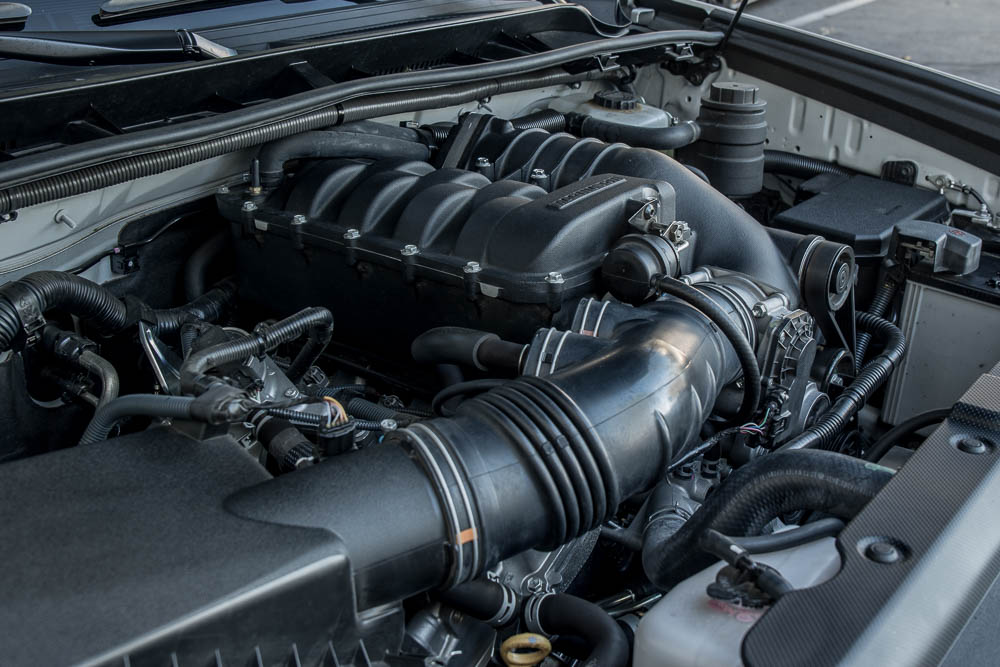 So, we’ve had the Magnuson Supercharger installed for about two weeks and spent this past weekend covering approximately 200 miles behind the wheel. Here is the breakout:

Let’s talk about how the supercharger performed in each scenario.

Between highway, city, and trail driving. Highway is the favorite. This is the opportunity that you really get to see, feel, and hear what the supercharger has to offer.

Let’s talk on-ramp. This is exhilarating, to say the least, and putting your right foot to the floor will throw you back in your seat while the supercharger whines and the engine roars.

It’s important to keep in mind that supercharging your 4Runner does not turn it into a racecar. However, the power gains you receive completely transform the vehicle to put power and acceleration back into your hands (or foot).

The on-ramp is not the only area of driving you can take full advantage of the Supercharger. As all 4Runner owners know, the vehicle is not known for its power output. This is made crystal clear when trying to pass or accelerate up a hill while already at cruising speed. With the supercharger installed, highway cruising, passing, and hill climbing is truly where the 4Runner shines.

The response you receive from the supercharger when you make the decision you need to move is immediate. Keep in mind, this does not mean the pedal is to the floor, though this is where I found the most notable addition of torque. Putting your foot about halfway down on the pedal will allow the supercharger to essentially do the work the OEM engine is not capable of performing.

Next on the list is city driving. City driving is thoroughly enjoyable, but there is not as much room to move and use the additional power as you can on the highway.

When the supercharger was first installed, the pedal was to the floor pretty much everywhere. After a few weeks in, we’ve spent more time finding the sweet spots and taking advantage of the tiptronic shifting.

The highlight here is the tiptronic shifting and the ability to have control of what gear you want to drive in. Anyone who has driven a manual transmission understands the joy of being able to control what gear you are in, and adding in the supercharger puts the vehicle on a completely new level.

The supercharger will kick in at right about 2,200 RPMs. At that point, the decision is yours on how to drive.

We spent 3 hours and covered approximately 50 miles of trail driving. The majority was spent in 4Hi. The stock 4Runner does fabulously in 4WD in any scenario, but the supercharger made the experience unbelievable.

Here is the bottom line… Matching the control of 4WD and the power of the supercharger in snow, mud, and incline scenarios, the vehicle is unstoppable and driving is effortless. 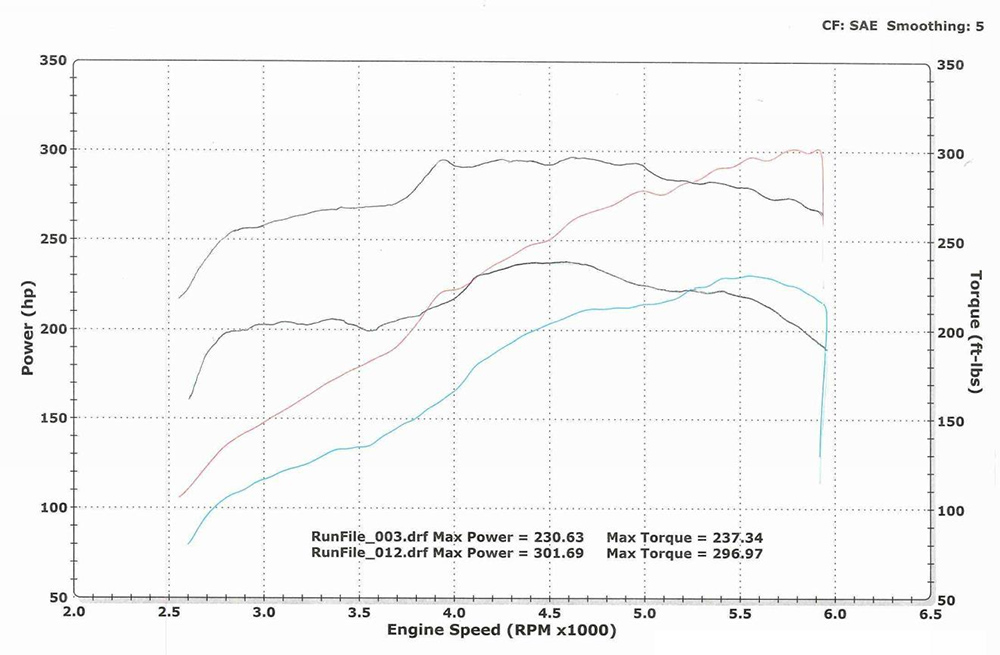 The big questions… What are the gains?

Note*: Initial results are for stock 4Runner with Magnaflow Exhaust and power is measured at the wheels, not at the crank.

Here is a breakdown of the dyno.

Bottom line: the supercharger provided an almost 31% gain over stock. For reference, the stock 4Runner engine 4.0L V6 puts out 270HP to the crank and is now outputting about 353 HP.

Let’s be real, the Magnuson Supercharger is not cheap. However, let’s keep in mind this simple rule: You get what you pay for.

Magnuson specializes in the manufacturing of superchargers and bolt on blowers are factory tested to be installed as if it came right from the Toyota factory.

So here is what you are looking at:

Unless you decide to buy during one of the holiday sales that Magnuson puts out, you are looking at about +/- $7,600. That is a major investment sure to agonize anyone’s significant other…

Let’s tie in the decision to buy. I had a lot of questions for the mechanic I took the 4Runner to about “how” to drive the vehicle. I was curious to if I ever needed to hesitate when driving the supercharger to now “blow up” my engine. He laughed at me and pointed out that I should stick to electrical (I’m in transit/light rail).

His response was simple. The blower is not going to put out enough power to destroy the OEM parts, and there is no reason I should ever have to hesitate or not use the supercharger to its full potential. Additionally, the supercharger has a CPU that is programmed to somewhat peel-off when needed. The mechanic mentioned that if I ever felt like the supercharger wasn’t putting out as much power as it should that it was because the CPU was letting it know that it essentially needed a break and that there were no issues.

Overall, you can drive the vehicle however which way you like and you should not do anything harmful to your 4Runner.

Many start the conversations about the effect of the supercharger on gas mileage. There is no distinct evidence that the supercharger either adds or takes away from your MPGs. However, the way you drive the vehicle obviously will play a role in how efficient the vehicle is consuming fuel. When the supercharger was first installed, gas mileage hit an all-time low of 9 MPG J. Obviously, we were driving more aggressively.

17.0 MPG is a pleasant surprise for us, but take this with a grain of salt.

Note*: The supercharger requires premium fuel. On average, we found the delta between 91+ and 85 fuel to be about $0.30 a gallon. Taking an average of 17 gallons per fill up, you’re looking at an additional $5.10 every time you’re at the pump.

Would I do it again?

Absolutely, 100%, no questions asked. The supercharger has completely transformed the 4Runner to reach its true potential. If/when I ever buy another Toyota, the first thing I’ll do is call Magnuson.

Passionate about weightlifting, cheeseburgers and my 4Runner. Located in Seattle, WA.

I think I know the answer but I just wanted someone else to say it….Adding this will void the factory warrantee from Toyota even if I have Toyota install it. Is this correct?

I spoke directly to Toyota about this and they told me if I find a Toyota dealer that will install it for me, it will not void the warranty. I live in Southern California and Cabe Toyota in Long Beach will do the install. Not sure the price.

Scott, I was curious on which Seattle performance shop installed your supercharger and have you had any issues since? I’ve read some people have had coolant leaks on the reservoir tank.

Will I be able to keep my KN air intake box and filter?

I was told I’d have to go back to the factory air box. This was from Magnuson

This is just what I have been looking for to fix my slow dog 4Runner. Who do you get to install it? Will a Toyota dealer install or do I need to go to a performance shop? Thank you for this article!!!

I had a performance shop in Seattle install mine. Magnuson has a list of approved installers on their website, i’d dig into that. If you can get ahold of a local shop that installs them, they can take care of everything (ordering parts and install). Roughly $1,500 for install.

I recently gained a lot of interest in supercharging my 2019 4runner TRD Pro! I am pretty much 90% locked in on purchasing it but just wanted to get some additional info with mpg! I have had mixed comment with mpg and after reading upon it here it got thinking that the mpg wouldn’t be so bad if you drove it normally. I just wanted to know how you guys based you mpg, is it via the vehicles computer or at the pump calculations?

So i’m in love with my 2007 4Runner. Even tho its my wifes hand me down since i bought her the 2018 4Runner. But basically i was the first owner. It has 277,000 miles. I have change the oil, spark plugs, religiously, basically the vehicle has been babied. It still gives me 22+ MPG at 55 MPH on cruise control. I want to turbo or supercharge it.
What are the recommendations?

are there any potential issues related to not having a variable speed fuel pump, revised ecu mapping or larger injectors? I have another car that has been supercharged and that kit included new injectors and a new ecu map. I’m concerned that the forced induction is going to lean out the mixture and could lead to issues longer term.

I didn’t see where you said synthetic oil is a must.
Also, previous plugs may last 150,000 miles on a stock Toyota. Supercharging and driving hard heard the plugs up much more, melts them down, and will require a sooner plug change. I had to change mine after 30,000 miles.
Also, my Tundra now has 270,000 miles, and a thicker synthetic oil, and changing at 3,000 miles has been recommended by Toyota.

On the flip side, I could only drive a consistent 60 mph because of traffic for 140 miles and got 20 mpg!!!

Great review, Glen. My shop recommended to increase engine oil change intervals to every 5k as opposed to the factory recommended 10k due to the extra load. What are your thoughts?

Hey Kervin – I pretty typically do a 5k service/oil change anyway. It’s kind of a habit I’ve always been into. I’m definitely driving the 4Runner a lot more aggressively with the supercharger, so based off that my thought is that it can only help the life of the vehicle to get an oil change more often at 5k.

Hey Joe – I grew up in CO driving those passes in my 2000 4Runner. I agree with your comment on how you drive having a big impact. My 4Runner is stock except for the SC and an Exhaust. Before the SC i would get between 18-20 (very rarely driving aggressively) and now I would say I get maybe 17.5-19, but I’m really using the supercharger when I need/want to on the freeway.

I’ve had the SC for about 3 months now and the gas mileage hasn’t stood out to be a headache in terms of MPG for me.

Scott – I live in CO and most of my miles are on the highway going over mountain passes to get to kayaking and mtn biking. Do you remember what your MPG’s before and after on the highway were? I’ve found that how I drive my car has a bigger impact on MPG’s than the lift and rack. I am around 16.2 and almost all my miles are highway or trail (pretty much no city). I like to cruise at 70-80 on I-70 up and down the passes.

Is the Magnuson compatible with the TRD CAI?

Yes, but you will need a different tune.

John who’s 3rd party ECU did you use?

So having the SC decreased your mpg quite significantly from 18 which is stock to average of 15. That is 3 mpg! I am already having 15 on my loaded 4 Runner, then adding the SC will lower it down to 12 with just regular driving! Your wallet will definitely feel it just to have those few HP.

I think Breannans original write up suggested you’d lose about 2mpg city and not much MPGs for highway. Seems to ring true to me after 6 months. I have 285/70/17 tires, 2.5” lift and a full frontrunner roof rack though. So yes I def lost a few MPGs. I hear regearing to 4.56 improves city mpg after lift and tires (and restores some zippiness after mods) but that’s a whole other convo!

It’s a stock TRD Pro with Magnaflow Exhaust and the Supercharger. For that 200 miles I got 17 but thats pretty much only because of the amount of highway driving in comparison. Typically i get right about 14-15.5 mpg.

Are you on a stock 4R? …or do you have larger tires/lift/roof rack/armor? I’ve had the Mag SC for 5 montgs and not seeing anything above 14.5 MPGs. It’s down to 14 now that winterized gas is at every pump.