Halogen, HID or LED. What is best for high beams in the 5th Gen 4Runner?

Also known as xenon bulbs. Much brighter than halogen bulbs, and more color options are available such as pure white.

The problem with HID bulbs for high beam use is the warm-up time. When HID’s first turn on they have a noticeable warm-up time before they reach full brightness, usually around 10 seconds.

The color temperature, or kelvin, will also shift some during the warm-up. This is not a problem when using them in low beams, but with high beams, you are often switching them on and off briefly.

HID’s are sometimes used as high beams, but usually, only in-stock vehicles that have a housing specifically designed for it. In this case, an actuator inside the housing moves a mirror or the bulb itself to allow the light to travel above the cut-off line.

Until somewhat recently, HID bulbs have been brighter than aftermarket LED bulbs. However, with new LED chips, drivers, and forced air fan cooling technology, LED’s are pulling ahead.

However, beware of fake specs. Many cheap LED bulbs have greatly exaggerated brightness specifications. Some also place the LED chips in bad locations to try to shove in more lumens with cheap chips, resulting in poor beam patterns.

This may also be the case for low beams, but it can be difficult to find an LED bulb that has both a good hotspot, beam pattern, and light output. More importantly, most high-powered LEDs will not fit in the 5th-gen 4Runner low beam socket. I bought a handful of LEDs to test in the low beam projector housing, but none of them fit, with one exception. The fan housing would collide with an internal part of the projector housing before I was able to fit the LED all the way in.

For the one that did work, it only had a marginally (16% brighter) hot spot than the HID’s, and an overall inferior beam pattern.

Because of this fitment limitation, HID’s remain king for low beam use in the 5th gen 4Runner projector.

Why I chose DDM tuning 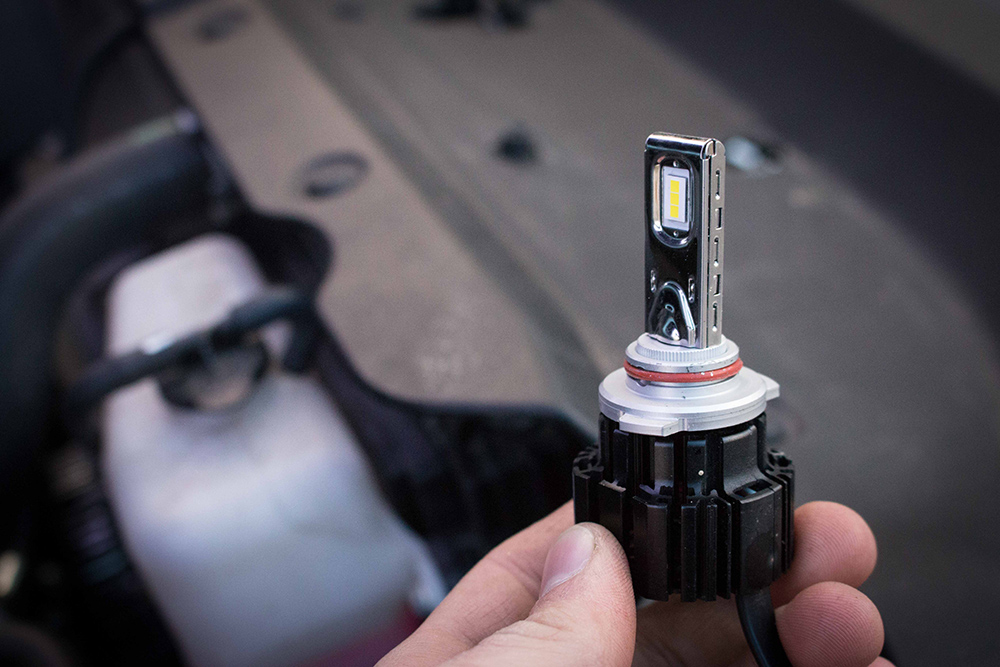 I went with DDM Tuning Saber LED’s because of numerous positive reviews specifically when placed in the 5th Gen high beam reflector housing.

There are a few lights out there that advertise higher lumens such as some random LED brands on amazon like KATANA, HIKARI, and SNGL but by only a few thousand more lumens.

With only a 24% increase in lumens from other brands, the perceived brightness increase will not be very noticeable to the human eye.

You also run the risk of the LED placement not perfectly matching the reflector, resulting in dark spots or a poor beam pattern. 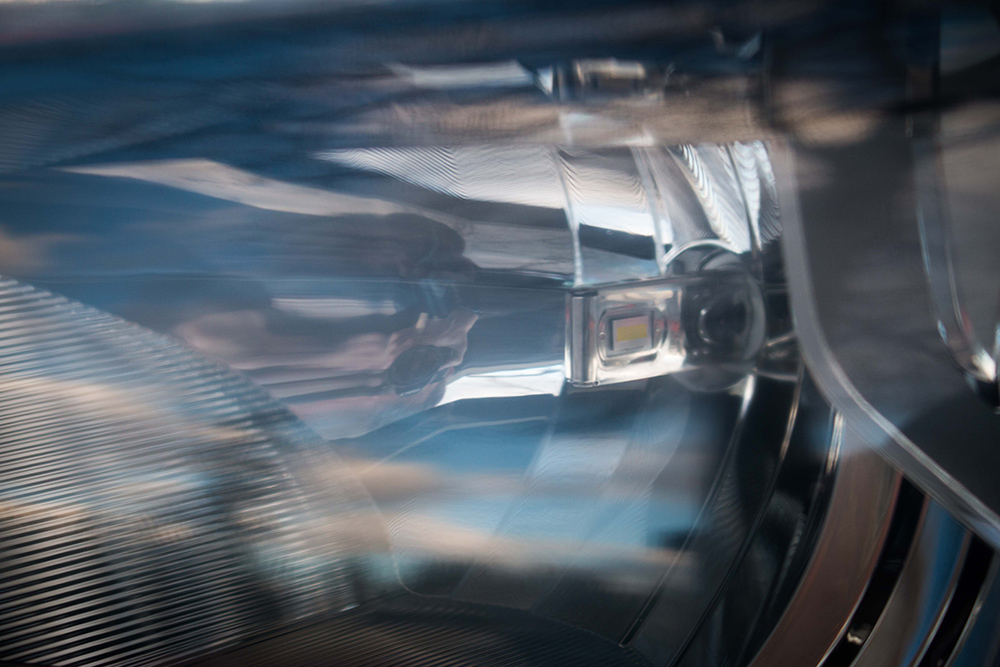 The install went smoothly and was plug and play.

Some bulbs have adjustable angles, but these are not adjustable. There was no need for an adjustment though as the bulbs rested at a perfectly vertical position when fully seated.

Wow…. these things are bright! I flashed some friends standing nearby and even though it was daytime I immediately got some compliments on how bright my lights were.

During the night I can see much further than with the stock lights and the pure white is much better looking. The beam pattern also seems to be close to identical to stock, which is what you want. 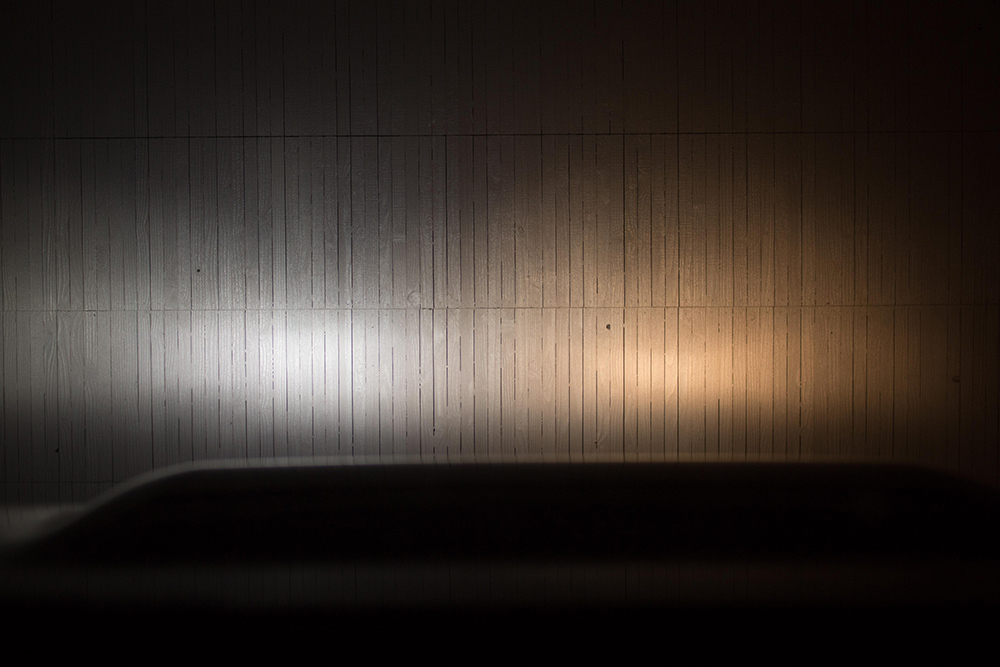 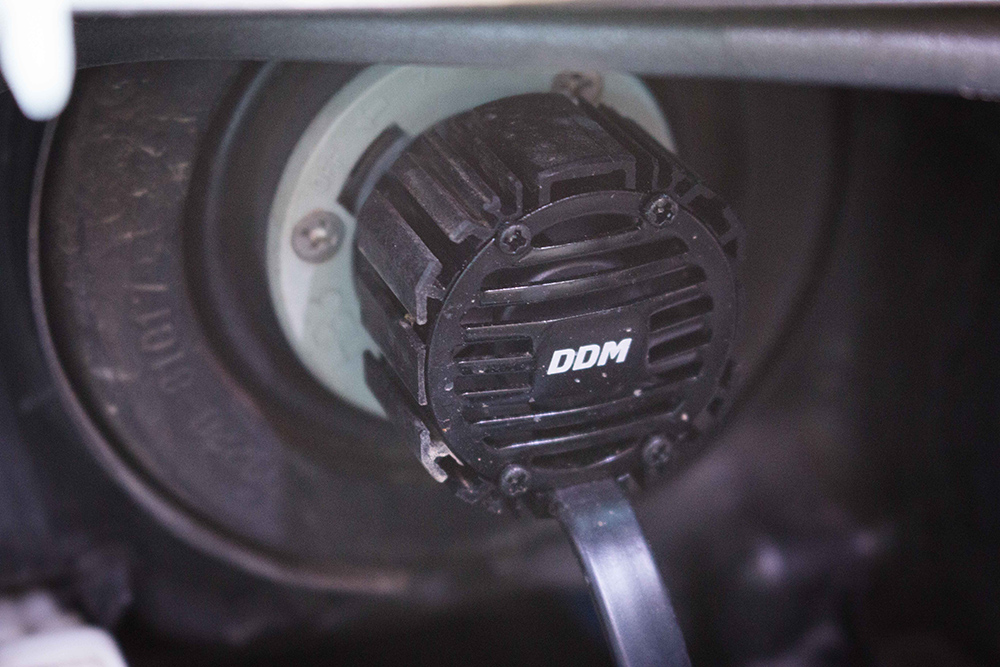 When choosing LED’s, you have the choice of built-in fans or fins.

Some LED headlights use passive cooling like large fins or stainless steel mesh. This will require running the LED’s at a lower wattage to keep them from overheating. By having no moving parts, these lights may last longer before they must be replaced due to fan failure. They also are totally silent, a necessity for some users.

More powerful LED headlights, like these DDMs, have fans. The fans allow the headlights to have more energy flow through them by forcing air over the heatsink instead of using radiant cooling alone. The fans also produce noise. This can usually be faintly heard from inside the cabin with the engine off, but with the engine running the extra noise from the fans is usually not noticeable. The fan housing also takes up more space than lights that do not have a fan.

On a 5th gen 4runner with the 2014+ headlight housing design, the high beam socket has plenty of space around it. Unfortunately, the low beam socket has plastic that is too close to the socket, preventing most fan cooled LED’s from fitting.

There are many arguments on both sides of the fence here. Some users prefer fans, and some do not.

It is on you to do your own research and find which set of lights you prefer for your 4Runner. 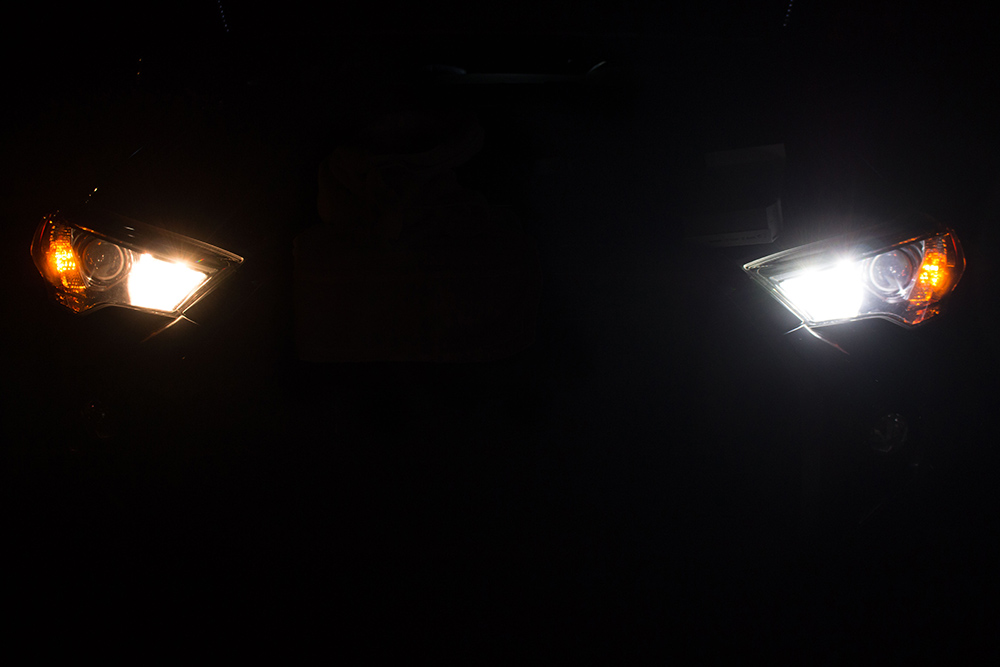 Sunlight has a color temperature of about 5,000 kelvin and considered pure white. Most OEM LED headlights installed on stock luxury vehicles today are between 5,000-6,000 kelvin. This gives you a light that visually looks pure white, or completely void of a yellow or blue tint, during nighttime.

The lower the kelvin, or the more yellow in the light, the better penetration the light has in snow or rain (like the yellow H16 fog light bulbs). This is something to consider, but I decided to stick with the pure white look of the 6000K.

I figured I would rarely use the high beams in snow anyway. I also vastly prefer the pure white look. 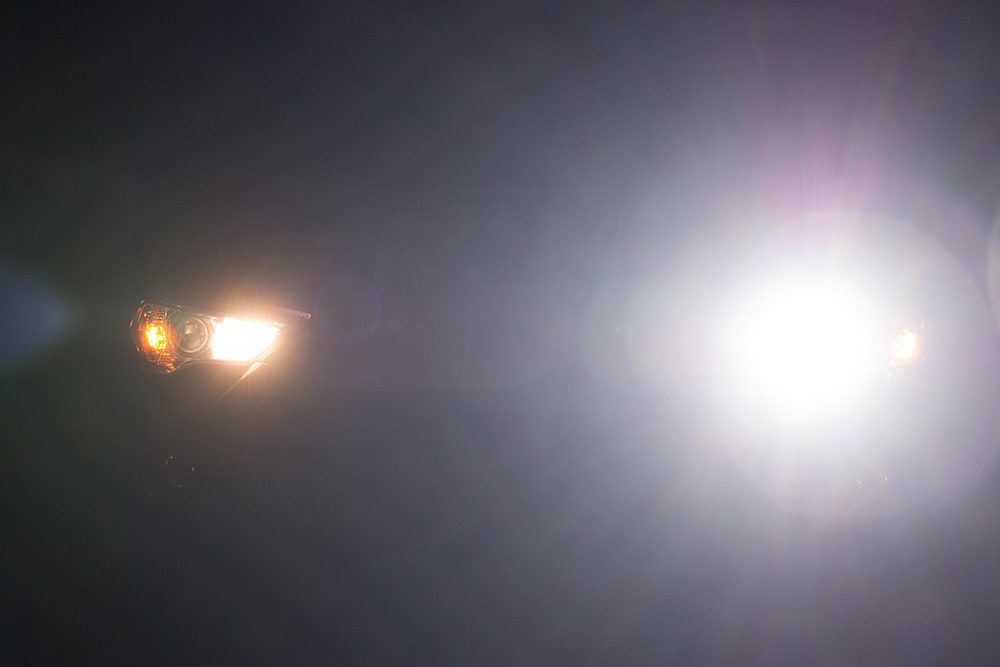 Here is a great example of how visually bright the LED’s are compared to the stock halogen. This photo was taken within the hotspot of both high beams. [1/60sec ISO400 f/4.0]

Here is the beam pattern compared to the stock halogen. Almost identical, other than a larger and more intense hotspot. 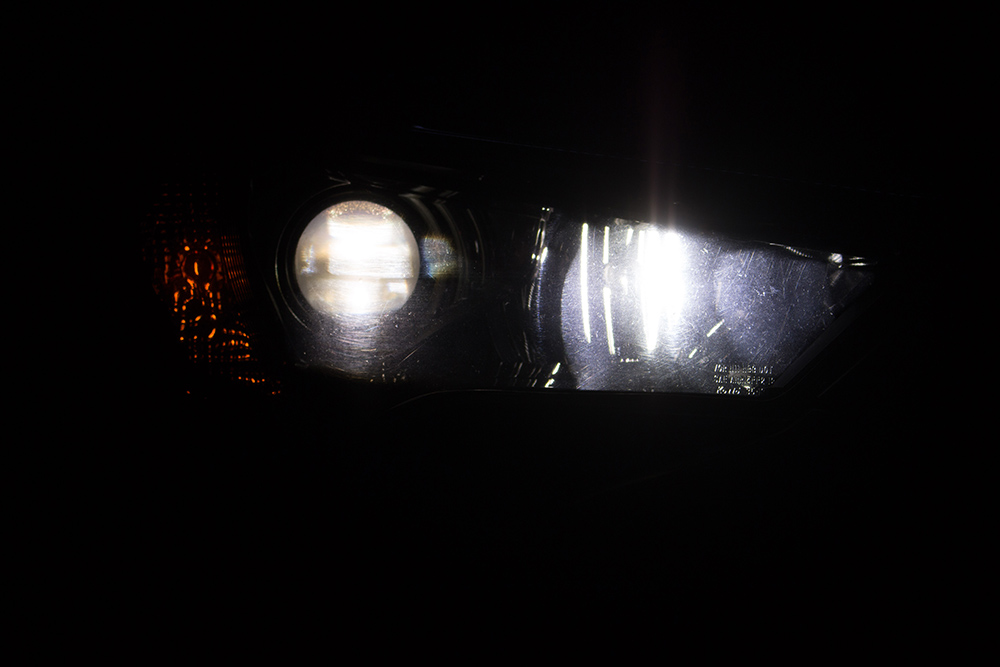 A popular low beam option for 5th Gen 4runners is the XenonDepot Xtreme HID kit. At the time of this review, I had them installed.

Even after testing a handful of 6000K LED options, the HID’s were still superior due to fitment issues on the LEDs. 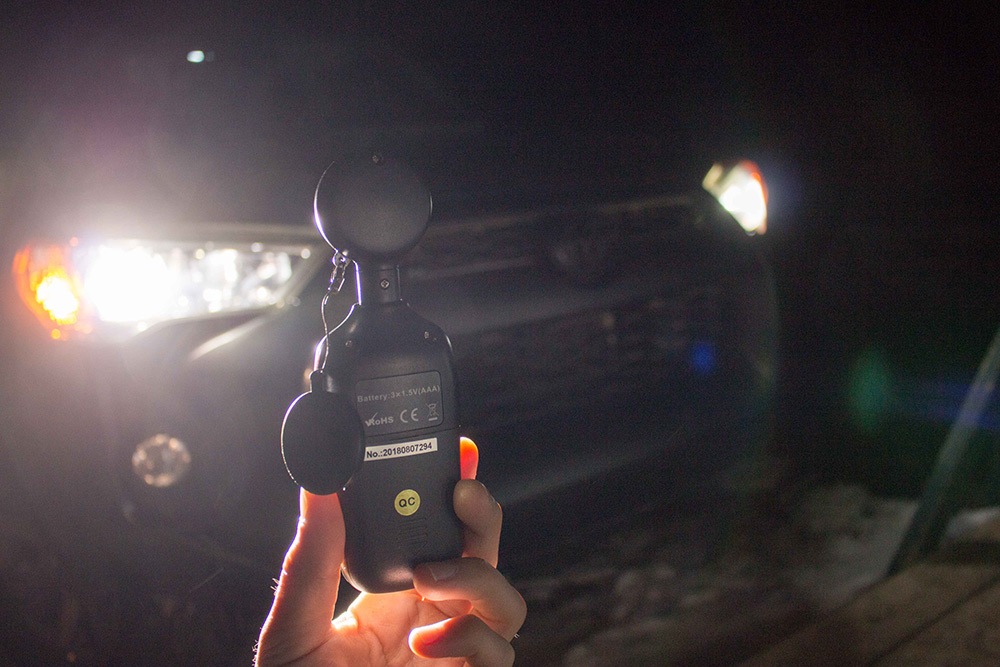 Now for the most important part of the review… actual real-world intensity measurements. Note that this photo shows me measuring much closer than I actually measured.

There are two units for measuring the brightness of a light source, lumens or candela.

Lumens gives you the overall brightness of a light. This includes light going in ALL directions, including light going to places you don’t care about, like getting lost in the housing.

Lumens are not a great unit to compare automotive lights with, as the real world results could change depending on the final placement of the LED chip. For example, you could have a 5,000-lumen chip that emits of a ton of light, but if it is not placed in just the right spot in the headlight housing you could get less usable light than a 3,000-lumen chip in just the right spot.

Candela gives you the “luminous intensity” or light intensity at a specific spot, adjusted for measurement distance. Assuming that the overall light beam pattern is good (close to stock), the maximum candela reading tells you how bright the hotspot of the light source is.

This gives you the max distance that you can see with the headlight, also known as “throw” in the industry. There is no way for an LED bulb manufacturer to advertise candela, as it will be different for every reflector shape.

For testing, I used this LUX meter. I measured the max LUX at 25 feet, moving the sensor around to find the brightest part of the hotspot.

I repeated the test multiple times to ensure I was getting repeatable data and then plugged the results into a formula to get the candela value. 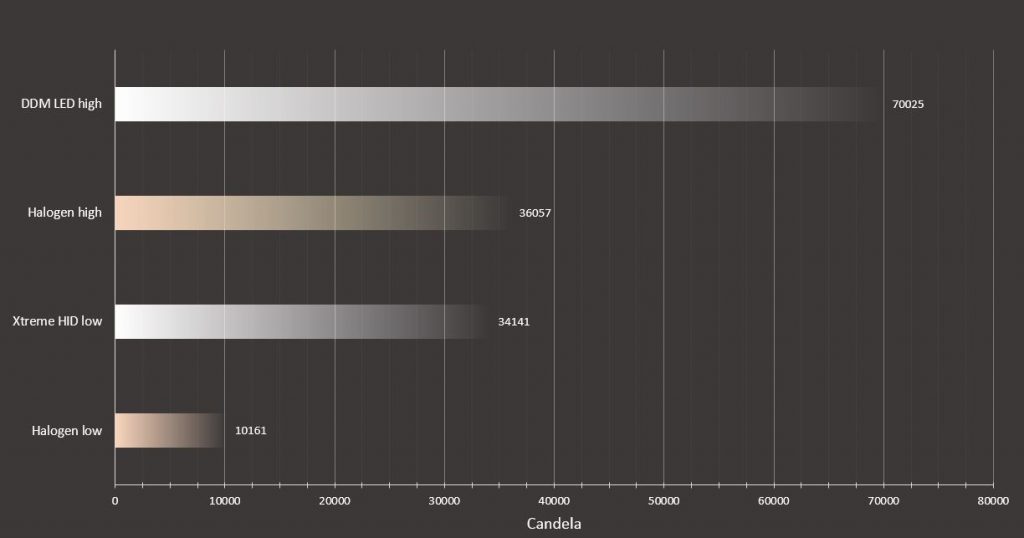 The graph speaks for itself.

Hello Bryson.. i got these same DDM lights for the High beam/DRL .. I did get the decoder, but as you said in your comments below, it does not make a difference. DRL is slightly dimmer and very hard to notice flickering with or without.

Question… did you realign your beams after installing these DDM led’s? I see my DRL are super bright and are aimed relatively high. I can see how I blind incoming drivers when the DRLs are on and even cars in front of me get annoyed with the bring dots in their rear view mirror.

I would recommend disabling the DRLs when running these. Its fairly easy to do and just involves bending a pin on a relay in the fuse box. If you google how to disable DRLs in a 5th gen 4runner there is a guide in the forums.

Have you seen anyone use the DDM Tuning Saber H11 low beam?

I tried it myself. The fan housing collides with the curved inner reflective housing inside the low beam. Due to the shape of the housing, the low beam requires that the bulb does not have a fan, or at least has a smaller fan. This removed the possibility of a high powered LED, so HID wins for the low beam.

Which HID did you go with? Your pretty thorough with this review and I’d trust your recommendation. Someone needs to break out a 3D printer and make dust caps with bigger backs.

The Xenon Depot HIDs seem to be the best choice. That’s what I went with.

Thr fan housing doesn’t collide with the dust cap, but collides with the actual reflector inside. I saw someone file down a fan housing to make it fit, so that’s a possibility but you risk not being happy with the lights and then being unable to return them. I tried 5 different LEDs and only one fit, but it was a cheap light and I found the HID to be overall better.

Has anyone bought the LED Decoder?

Not nessasary in the 5th gen 4runner, so it’s unlikely anyone has them.

They is no noticible flicker, and they run dimmer when in DRL mode.

Will
Reply to  Bryson Hicks

dimmer in DRL & no flicker: is that with or without the “LED Decoder” they offer on the drop-down when ordering?
thanks!

Bryson Hicks
Reply to  Will

Nope. Just what was in the box. No decoder needed.

Will
Reply to  Bryson Hicks

Cool, thank you. I might give these a try then. As a lighting designer I appreciate your attention to detail & using a light meter for intensity comparison! Thanks for that info.

Question regarding these bulbs – how do they act in the DRL mode? any flicker?