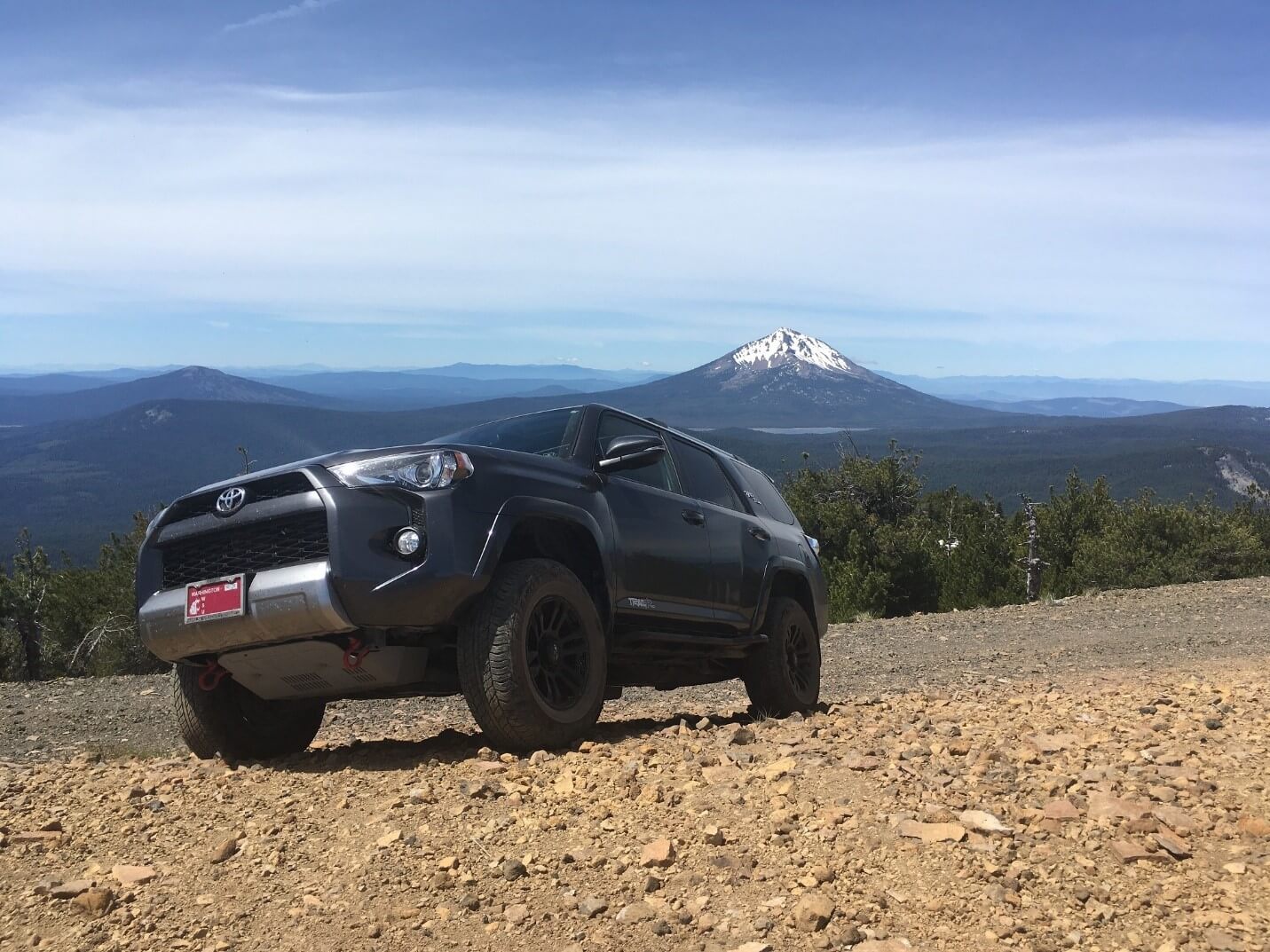 4WHEEL UP AN ANCIENT VOLCANO IN SOUTHERN OREGON

Yes, driving to the top of an ancient volcano is as fun as it sounds. So where is it and how do you get there?

Pelican Butte is at the southern tip of the Cascade Mountain Range in southern Oregon, near Klamath Falls, 28 miles south of Crater Lake National Park. Pelican Butte is classified as a shield volcano that last erupted about 300,000 years ago. If you live in the general area or plan to visit Crater Lake or another destination nearby, it’s well worth a couple extra hours to take a look.

The trailhead is off of Highway 140 and comes up on google maps. As you can see, the main trail is an out and back, to the top and down, full of switchbacks.

CHECK OUT THE SIDE TRAILS 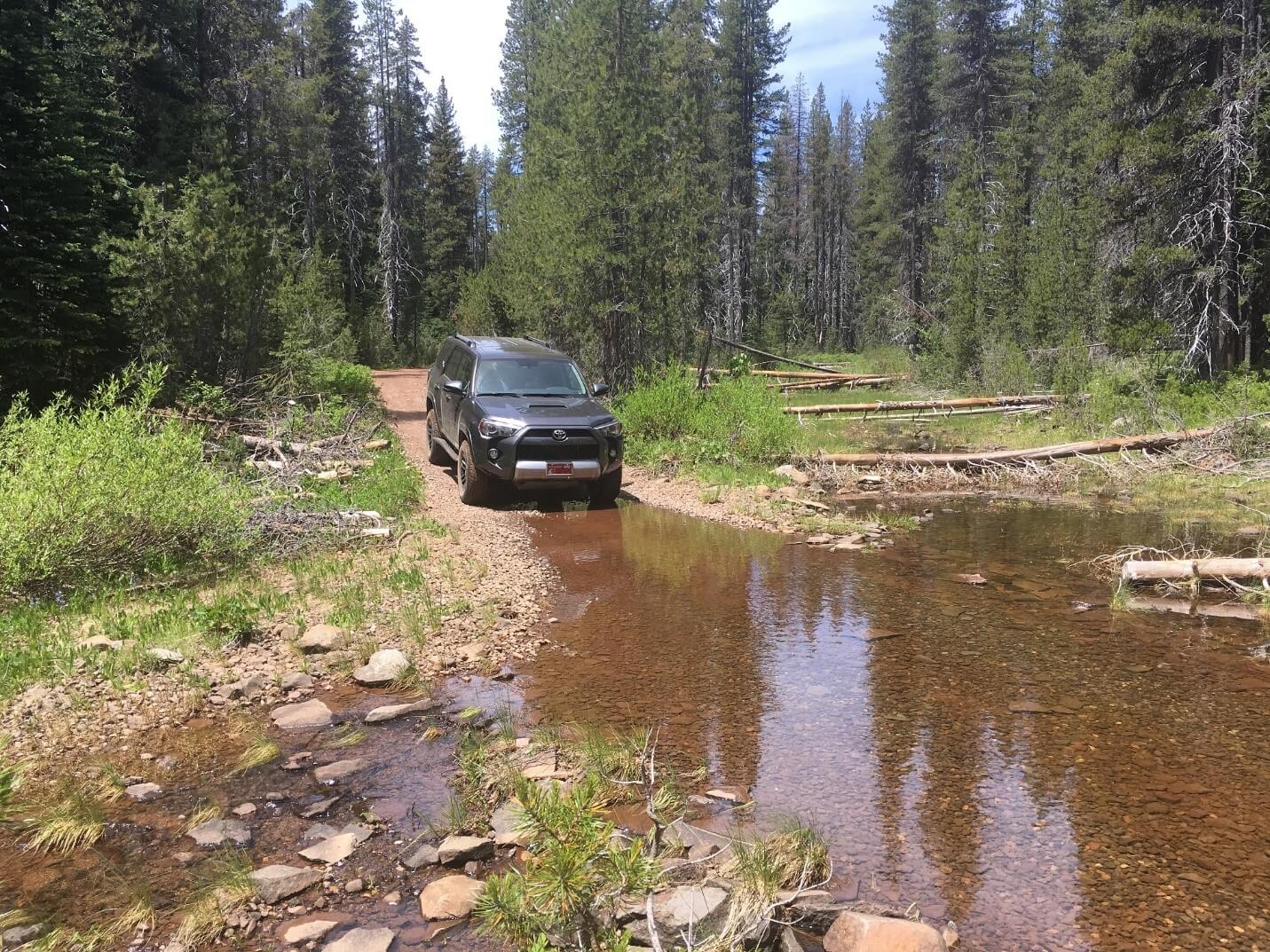 Either before or after you hit the 5-mile climb to the peak, make sure to explore some side trails. There are several trails to choose from, however we only had time to explore a few. The main road is gravel, but most turns take you into more interesting trails and scenery. We found a couple water crossings and some mildly technical spots. Some photos I’ve seen show where people found a few large rocks to crawl over in this area.

There are some sharp stumps sticking out of the ground and on fallen trees in a couple spots that you might want to avoid driving over, especially if you are still sporting your factory tires like me. Also, some areas that might be wet and soft, especially in the spring, but we didn’t run into anything too challenging at the base when we went.

EVERY SIDE TRAIL HAD A NICE SURPRISE 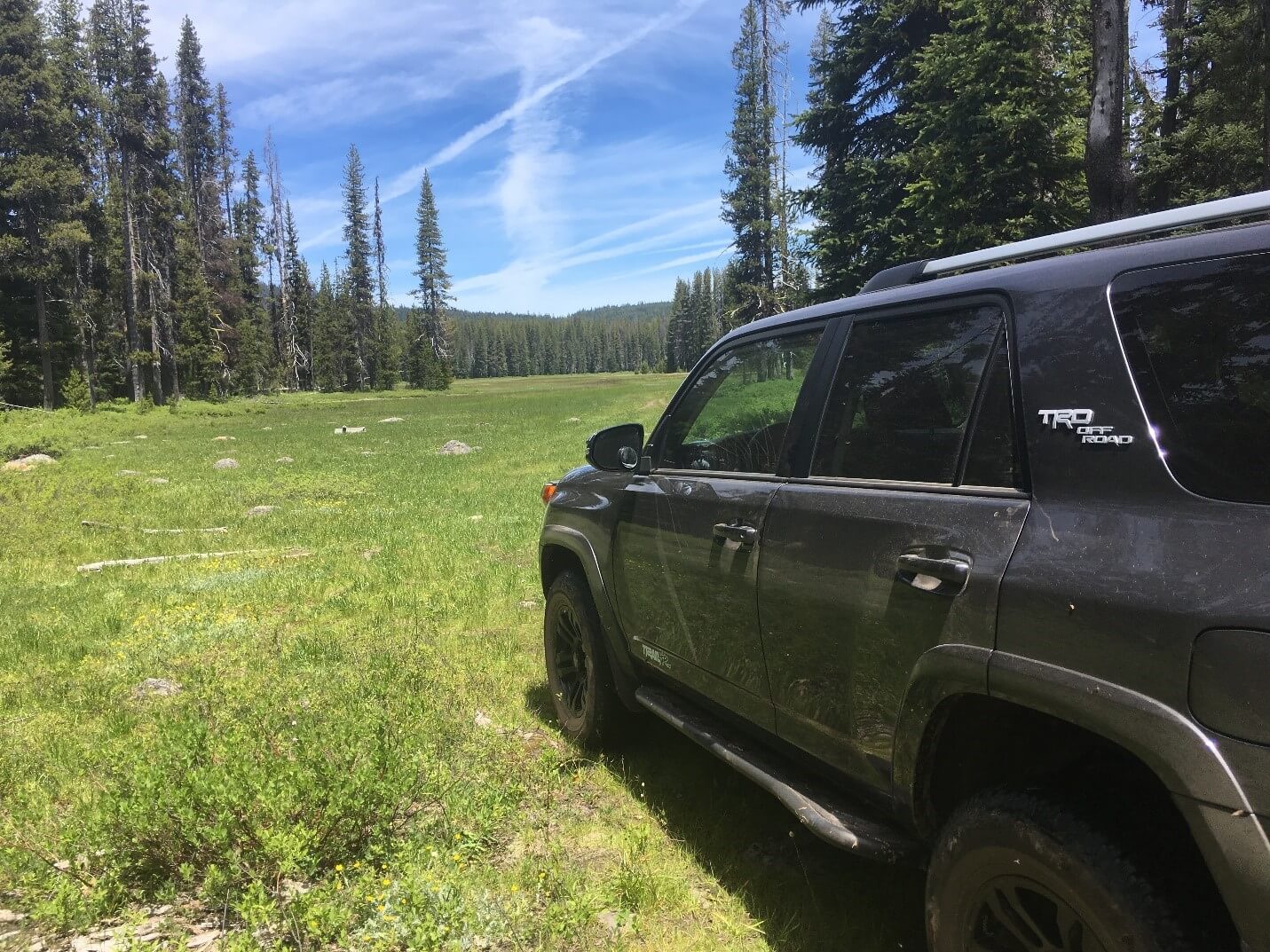 Again, we didn’t run into anything too challenging on the base trails we hit, but they were definitely fun and interesting. Above scene was at the end of a trail that ended in a primitive campsite. I could see some people drove further out into the field, but we decided to tread lightly and just enjoyed the view and turn around back to the trail.

TIME TO GET SERIOUS AND MAKE THE CLIMB 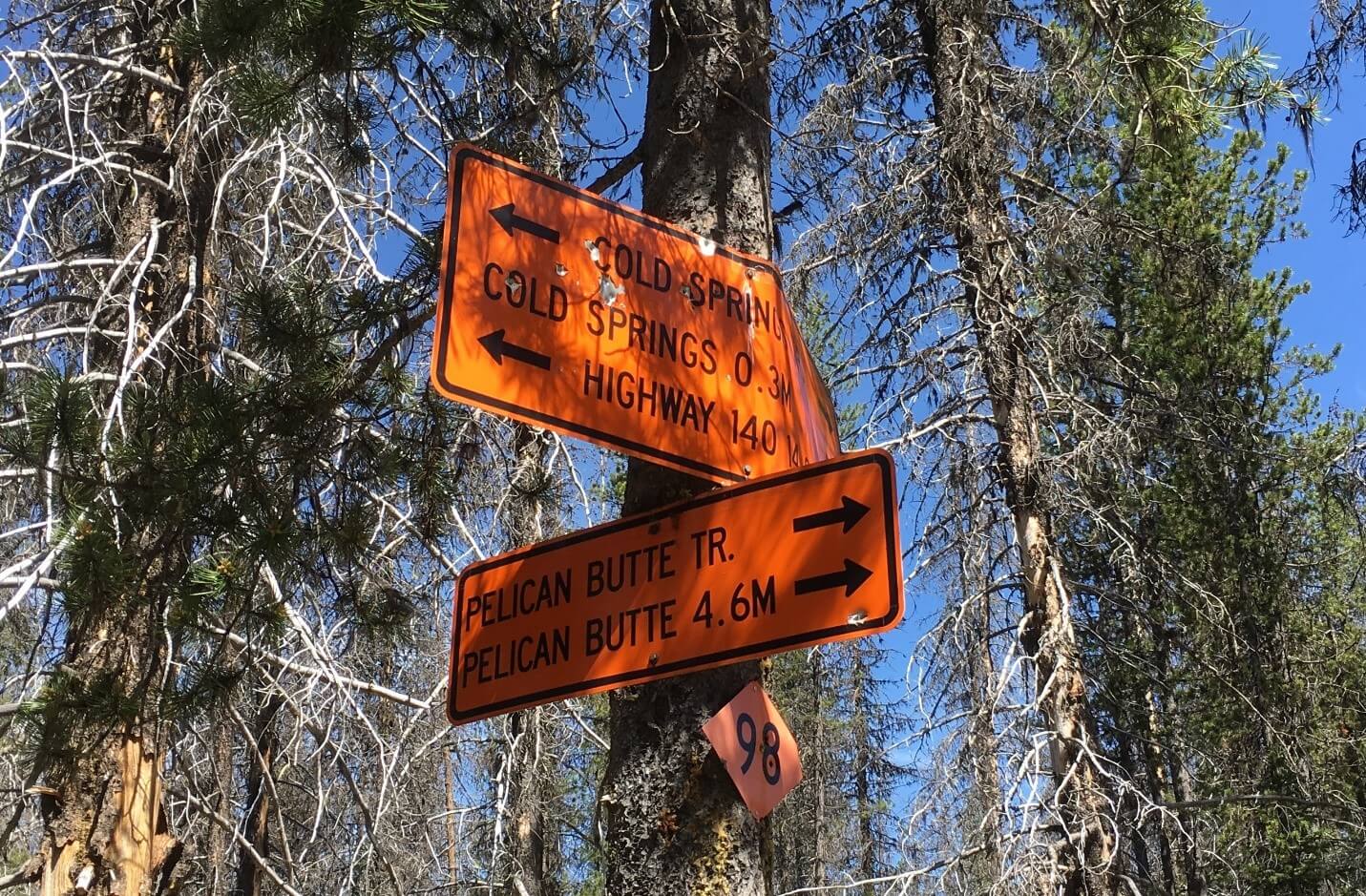 This is a right turn to go up the mountain. Follow the “PELICAN BUTTE 4.6M” arrow. You will see an “OLD PELICAN BUTTE TR” sign just before this, that one is only accessible by foot, so drive a little further to this correct turn. Now time for the real fun. 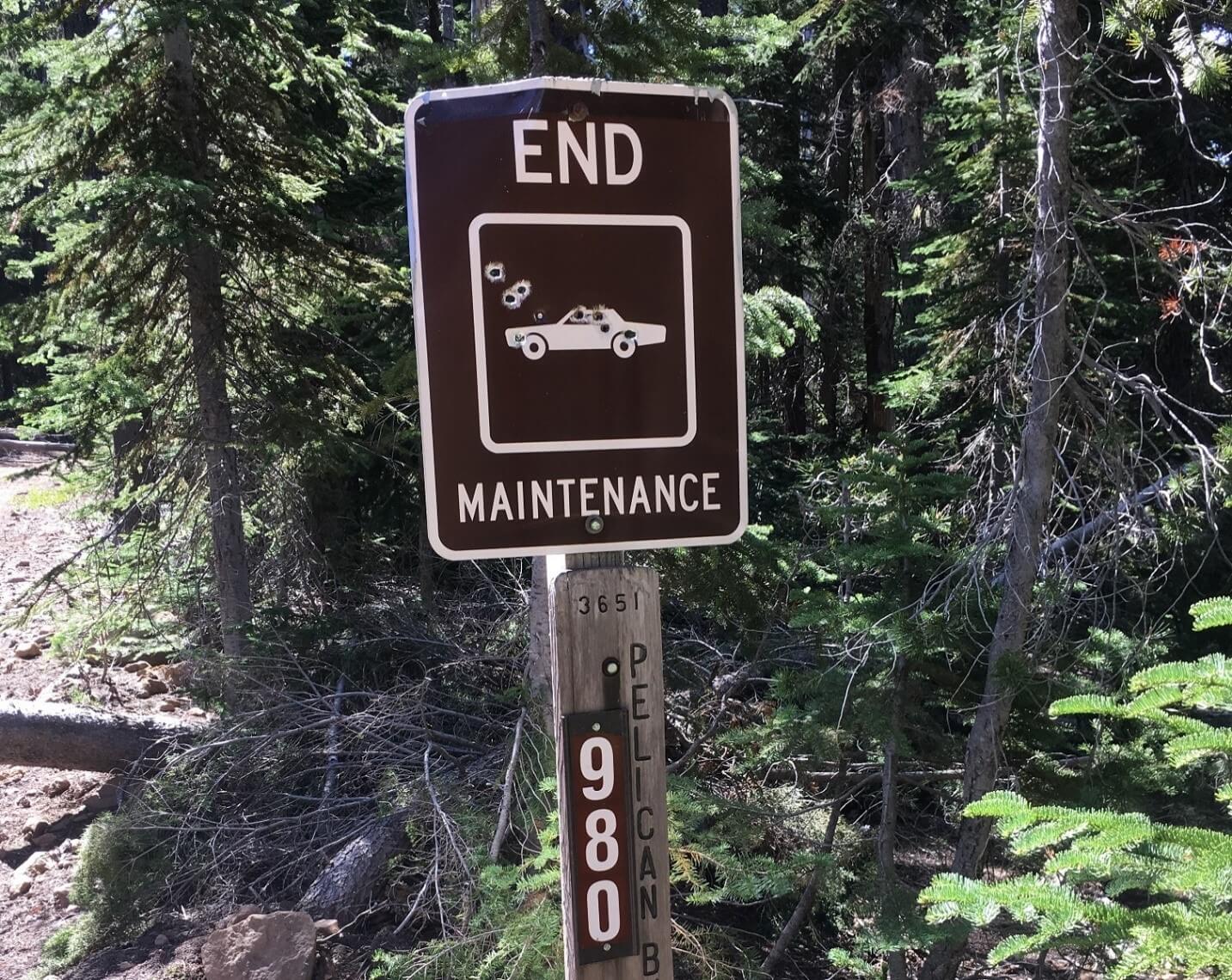 After you make the turn for the 4.6 Mile Pelican Butte Trail, you will immediately see this sign. Every driver’s skills and vehicle’s abilities are different and trail conditions can change, but personally, on the day we went, we would have felt comfortable taking a stock SR5 4Runner, Xterra or any Jeep Wrangler up this trail.

I would not take a unibody SUV like a Rav4, Honda Pilot, Subaru or any other lower clearance vehicle up this trail. There would be a small chance of getting stuck and a much greater chance of trail damage to the underbody with these less capable vehicles, as it is pretty rocky here. You really want at least 9 inches of clearance and a 4-wheel drive at this point. That being said, as always, use your own judgment as the trail conditions can change and you want to keep yourself, your passengers and your truck safe. I really enjoyed this next section, it wasn’t too difficult for me and my 4Runner, but not a cakewalk either. 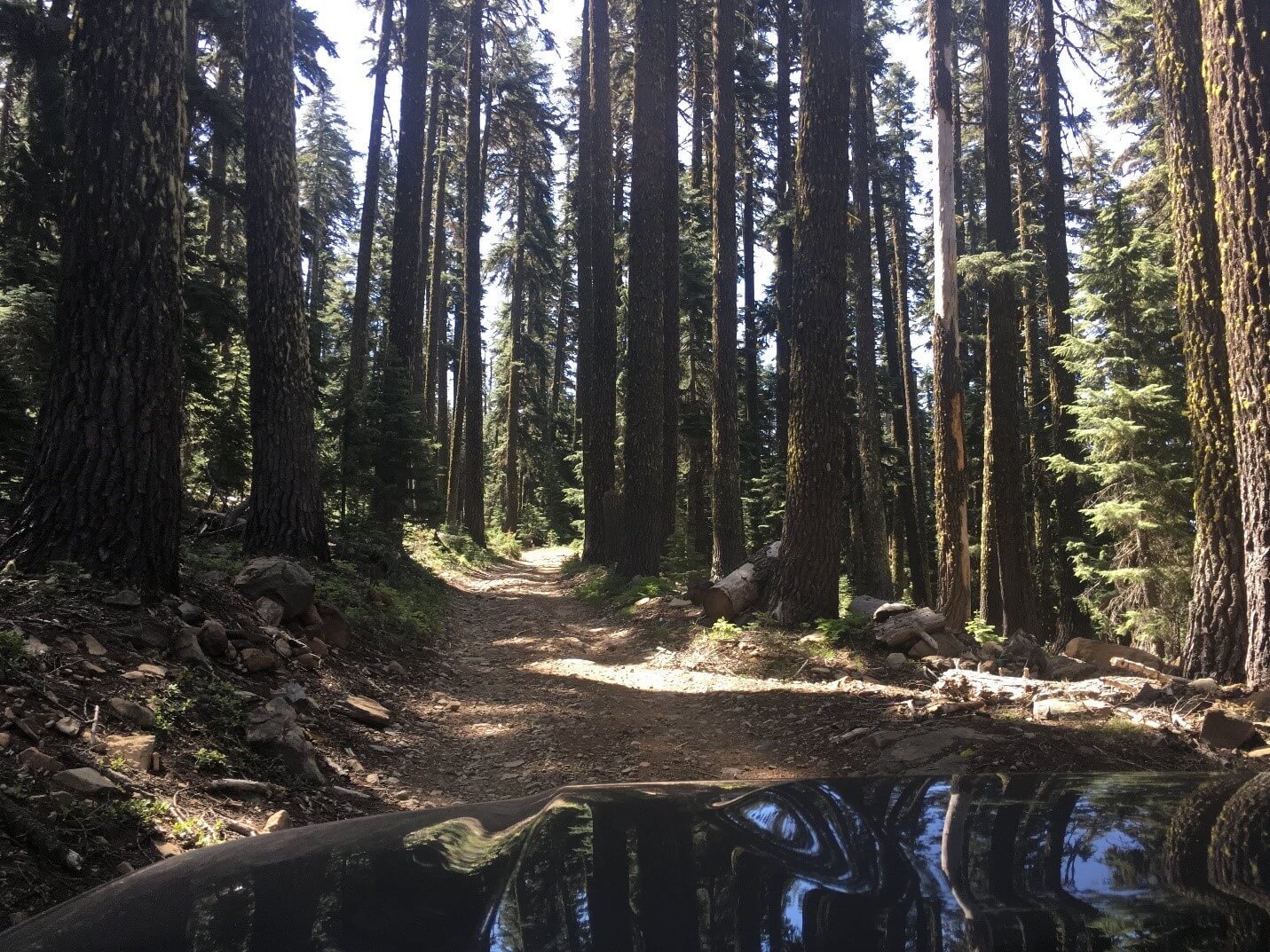 This portion of the trail is in a fairly dense forest and pretty rocky, especially at the bottom. I really didn’t get a good picture of the trail here. I guess I was busy having fun driving, plus the mosquitoes were quite thick down in this part. It is definitely rockier than this picture depicts. It’s a single lane trail, but not heavily used and there are quite a few places you could pull over to let someone pass by if needed. We went on a weekday and didn’t see a soul on the trail. As you can see on the map, you will go up a series of switchbacks to get to the top. We really had fun here and liked the thick forest scene.

SOME TIGHT SPOTS FROM DOWNED TREES 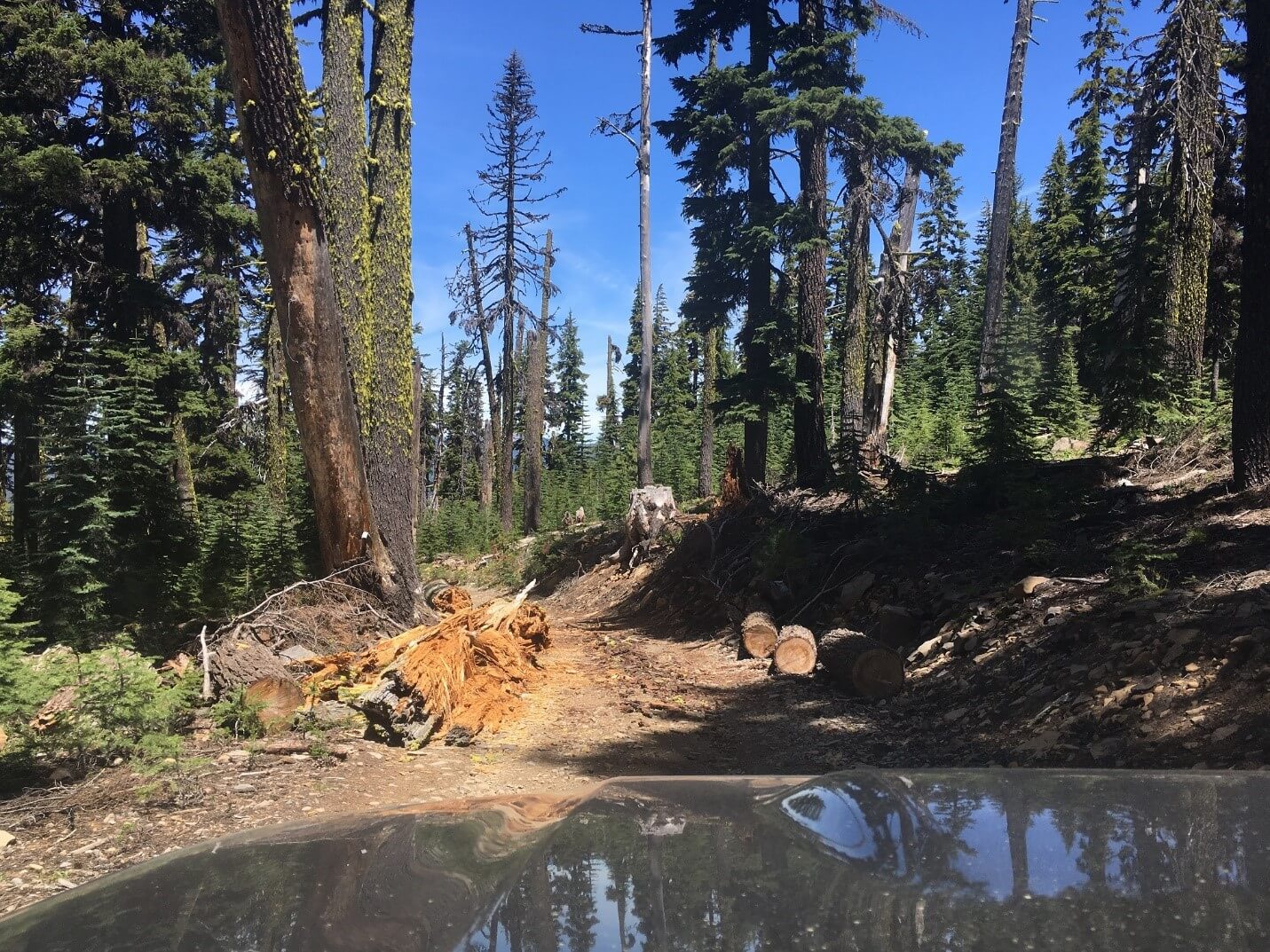 We did hit some tight spots from fallen trees and, but nothing we could not squeeze through. Of course, any given day, who knows what will be on the trail. 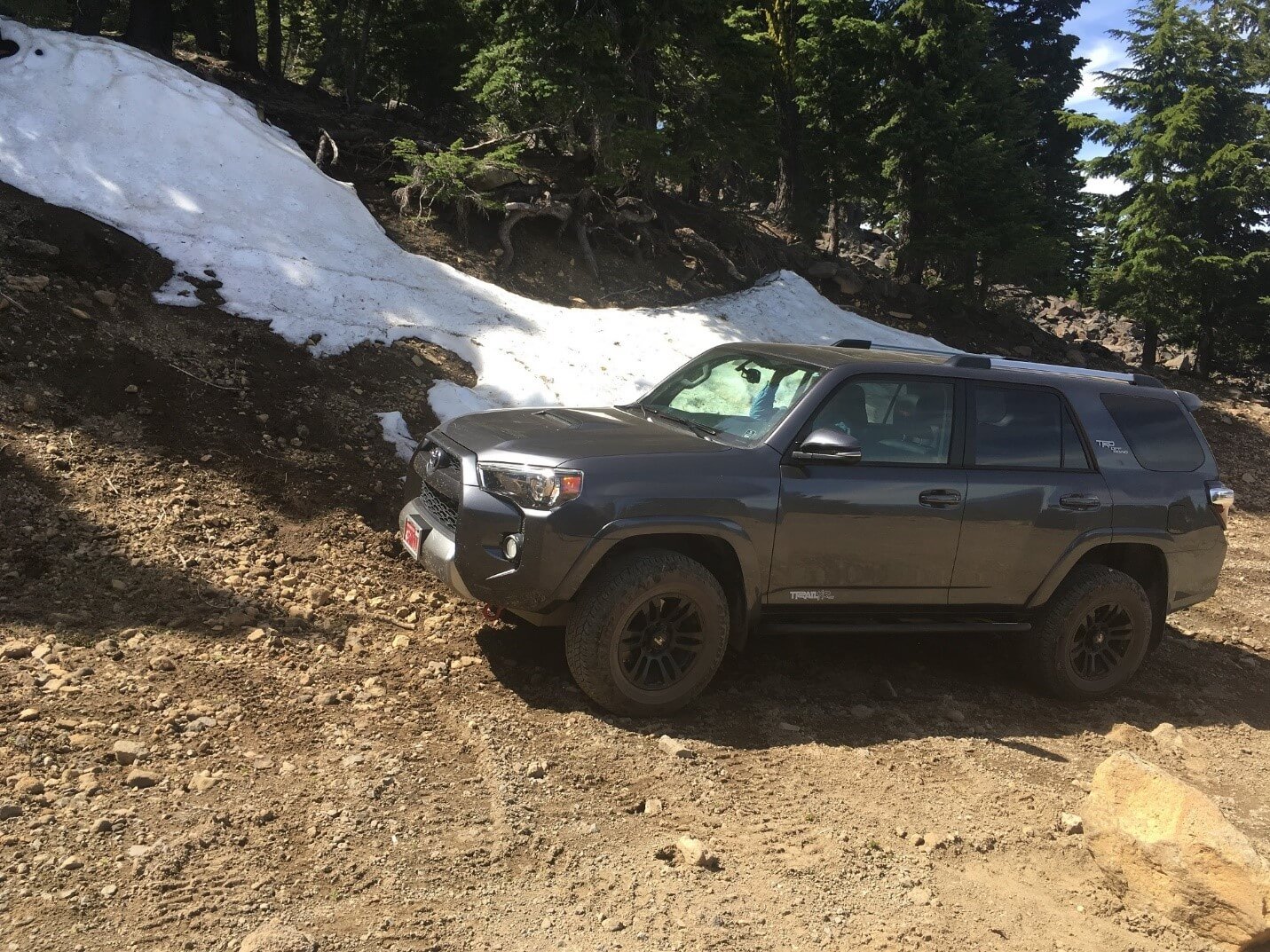 This trail is snowed in a good portion of the year. Sometime in June seems to be the general time when the trail becomes usable. Early June sounds pretty sketchy most years, but late June is likely okay. We went in late June and it was pretty dry with just some snow near the top, but not directly on the trail.

YOU HAVE CONQUERED, AND IT WAS A FUN RIDE 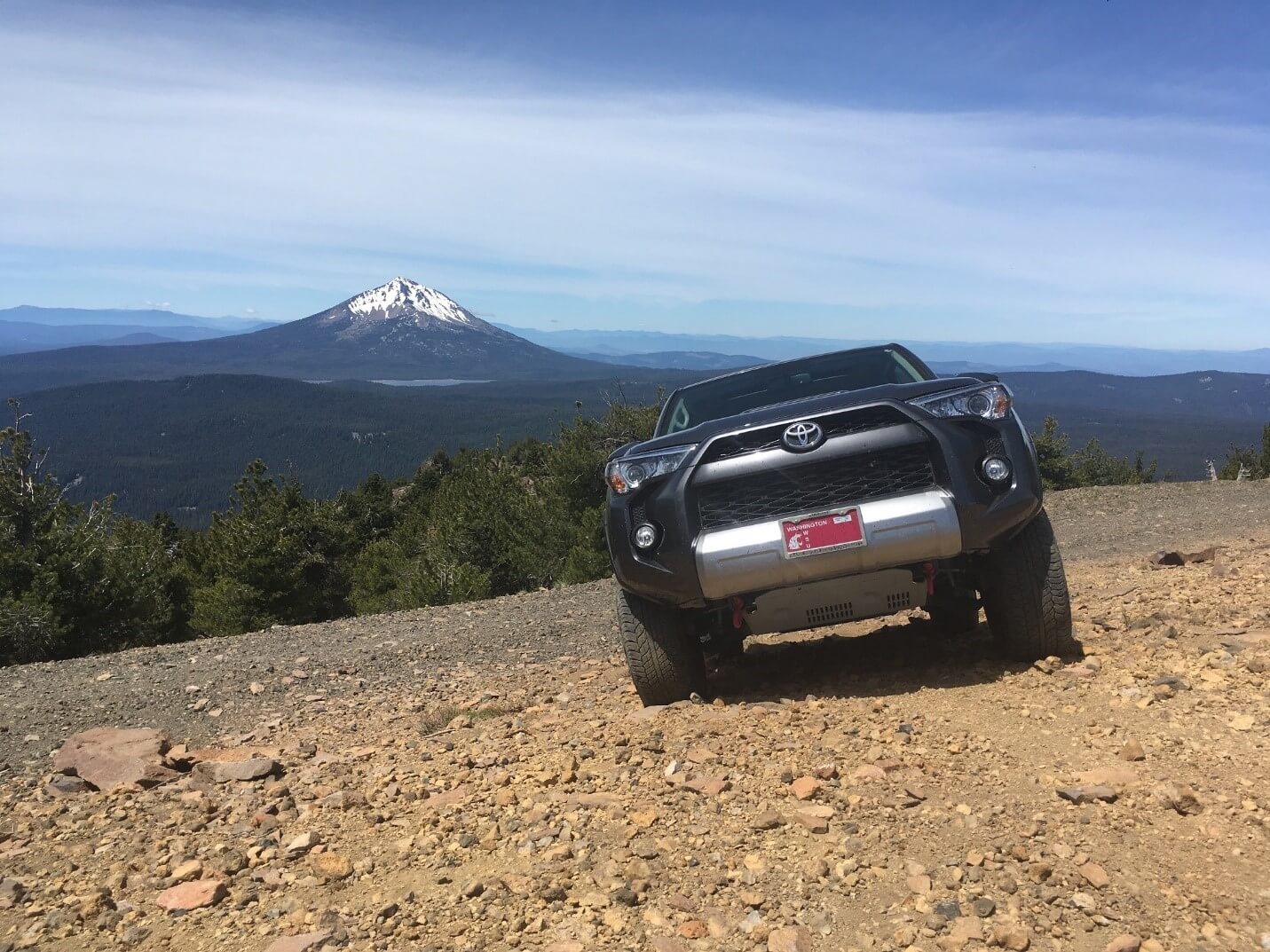 You have made it to the top and half the fun was getting there. Mosquitoes are nowhere to be found up here and wow, what a view! The bluff is relatively clear of trees and you have a 360-degree view around as you sit at 8000 feet elevation. On a clear day, Mt. McLoughlin is spectacular as you can see in above picture. Mt. Shasta is also visible from the top. 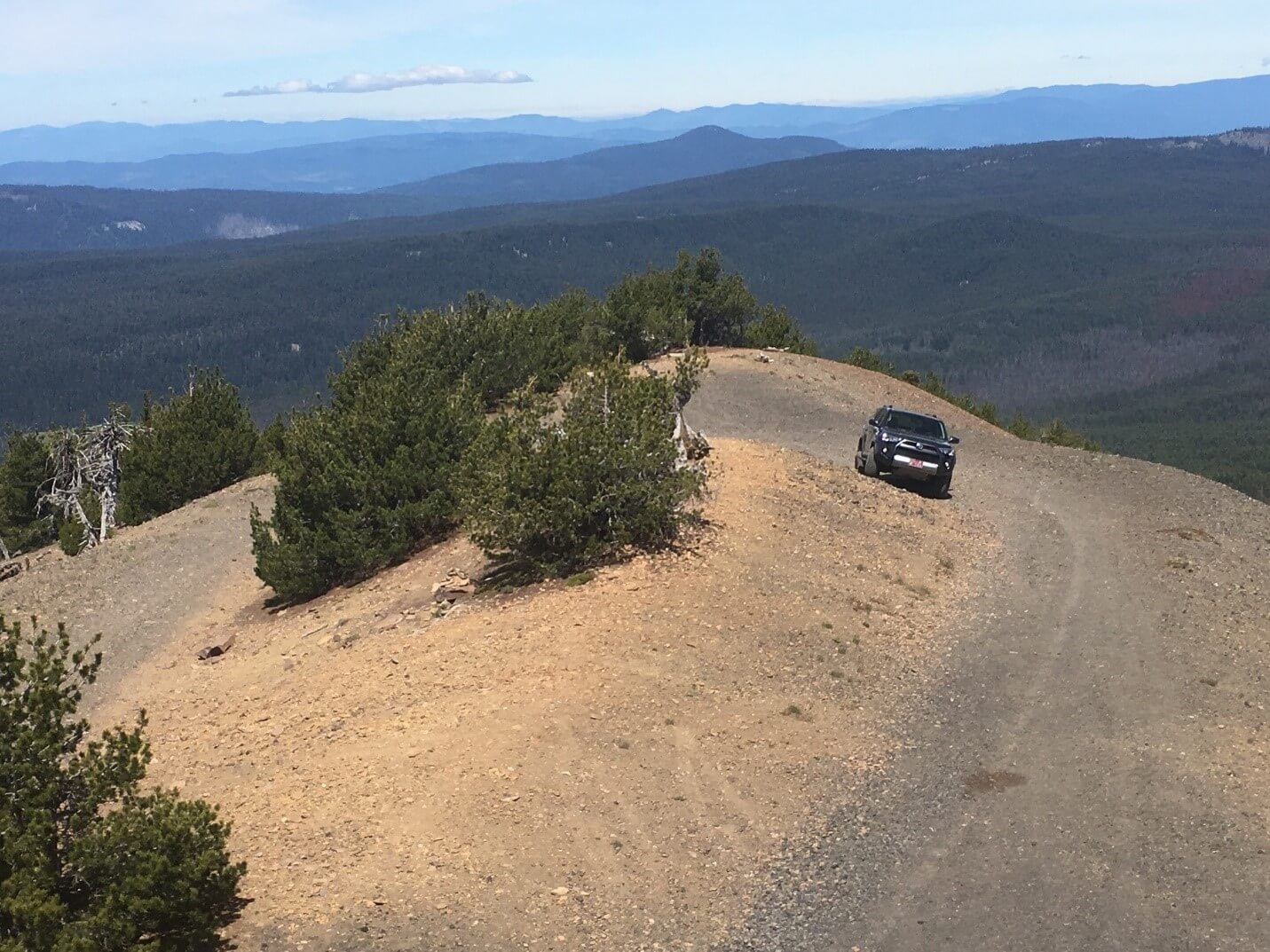 There is lots of room on the bluff, including a loop to easily turn around. Hike around to the different sides to get a variety of views of the world beneath. 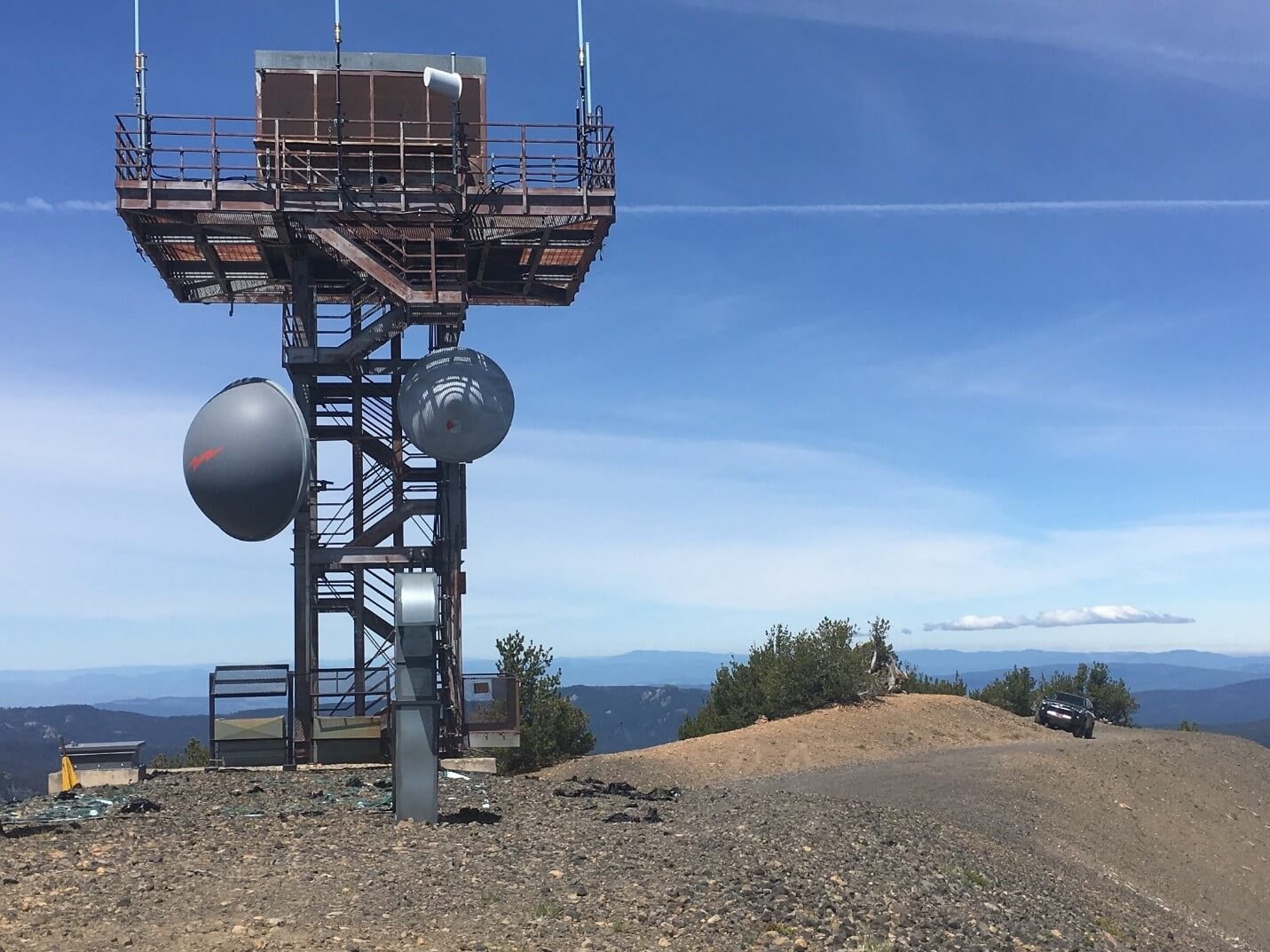 At the peak is a large fire lookout that is no longer manned but has been retrofitted as a radio tower. Actually, it’s pretty interesting to check out.

Pictured above is the huge crater created when part of the volcano blew. It’s shaped like the back side of a shield. Our 4Runner is the tiny truck on the upper left side of the picture to give you some perspective on the size of the crater. Spectacular view of the crater from here.

KING OF THE MOUNTAIN 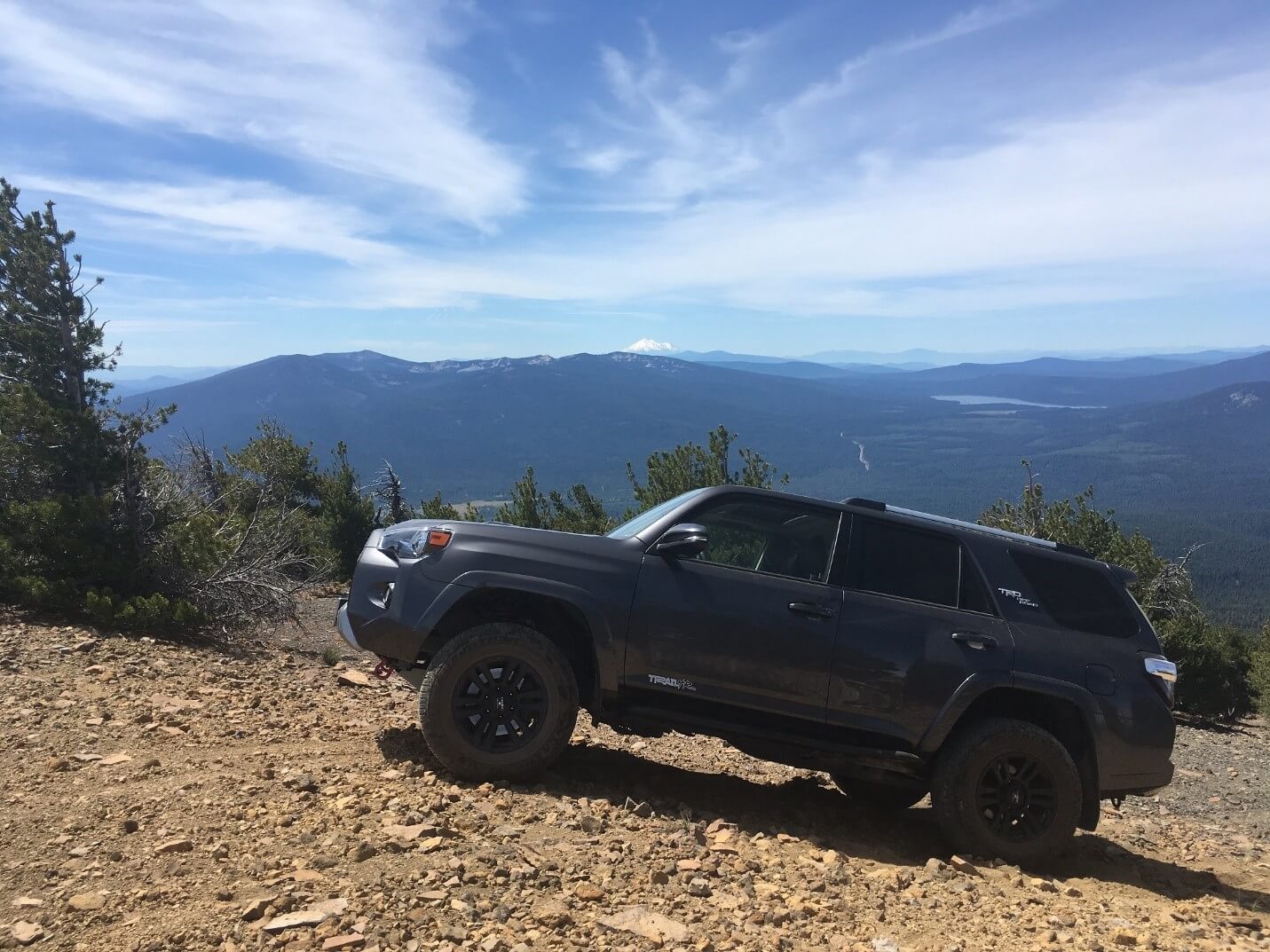 Overall, Pelican Butte is a really fun trail with lots of variety and a real payoff at the top. I recommend going on a clear day if possible to get the full effect of the view, but either way, it’s well worth time to check this little volcano out. Be safe, know your limits and enjoy getting out in the forest!

I have a passion for long distance trail running and any activity in the forest, including a little off-roading in my 4Runner whenever I can. I’m a strong believer in taking the path less traveled.

Great write up! I’ll have to get up there some day.

Yes, good eye, that is Mt. Shasta in the background of the last picture. I debated about making the trek, as I had limited time, but was so glad I went, it was spectacular and definitely worth it. I hope to go again next time I’m in the area.

Awesome trail John. This looks like a lot of fun for a random weekday adventure. Looks like Mt. Shasta in the last photo? Just for the fact you can say you drove to the top of a Volcano is pretty rad. Very cool, thanks for sharing!