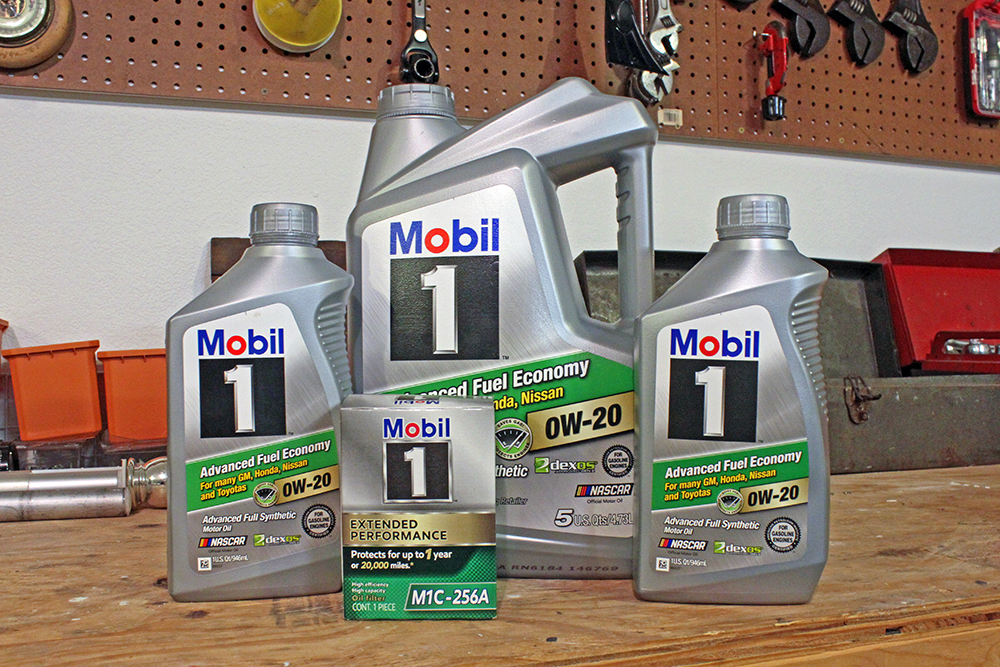 There are many different types of maintenance you can do on a vehicle, but quite possibly the most important is changing your vehicle’s oil. If you are wanting to have a reliable and long-lasting vehicle, I would suggest changing your oil every 5,000 miles. You might not need to change it quite so often with synthetic oil, but it is well worth the money. You really should only use synthetic oil as well, such as Mobil 1. Although a 4Runner is pretty bulletproof, changing the oil is necessary and will only aid in a smoother, longer lasting vehicle.

There are some key components you will need for changing the oil on your 5th Gen 4Runner. Here is a list of everything you will need:

HOW TO CHANGE YOUR OIL – STEP BY STEP

The first step is to find a location to change the oil on your car. I can fit under my 4Runner without any ramps or a lift; however, if you need and or prefer to raise your car up, do so accordingly.

Prepare to change your 4Runner’s oil by putting on some latex gloves. Although this isn’t necessary, I believe it is best to try and keep your hands as clean as possible from oils and grease. Using gloves also helps to have a quick clean up, because sometimes grease can be really hard to get off your hands. 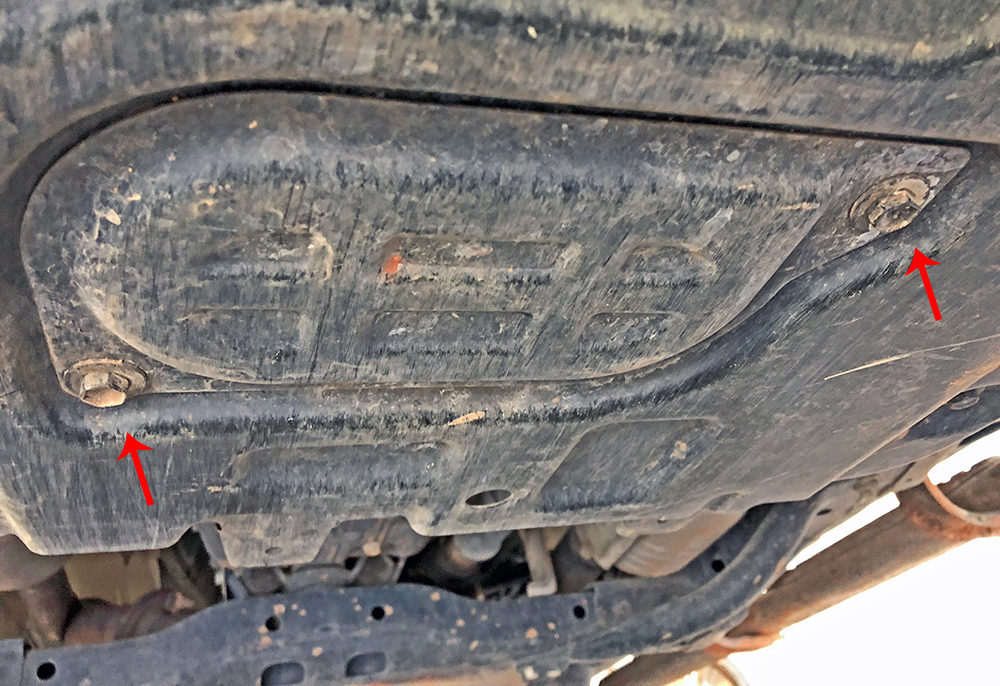 If your 4Runner comes equipped with a front skid plate, you will need to remove the small cover located on the skid plate that will give you access to the oil drain plug. 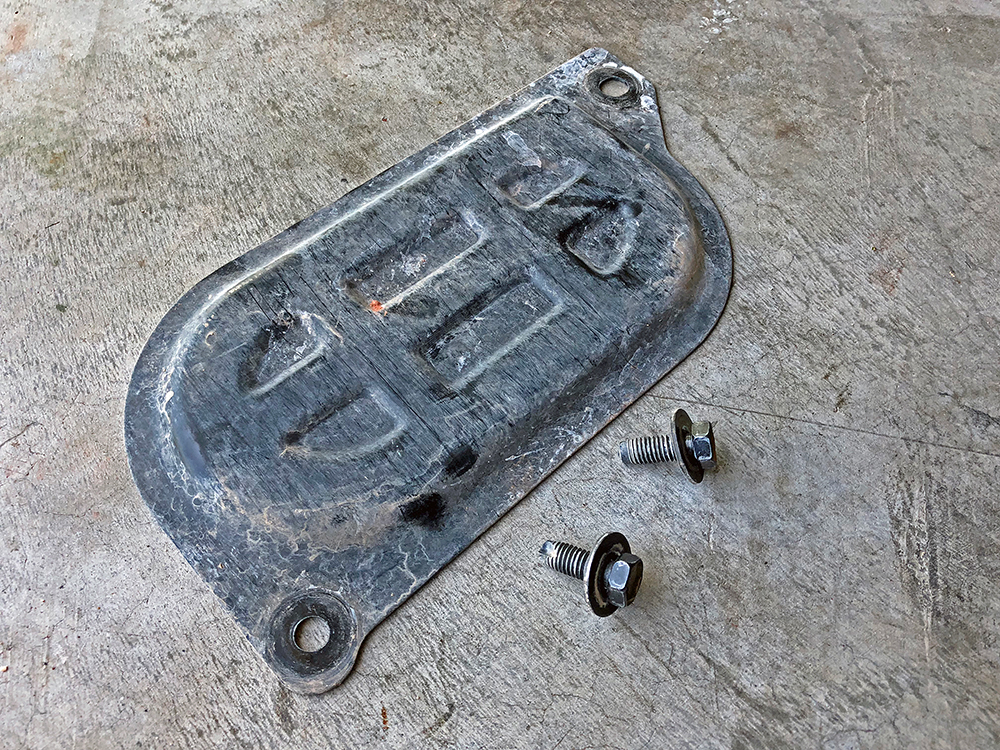 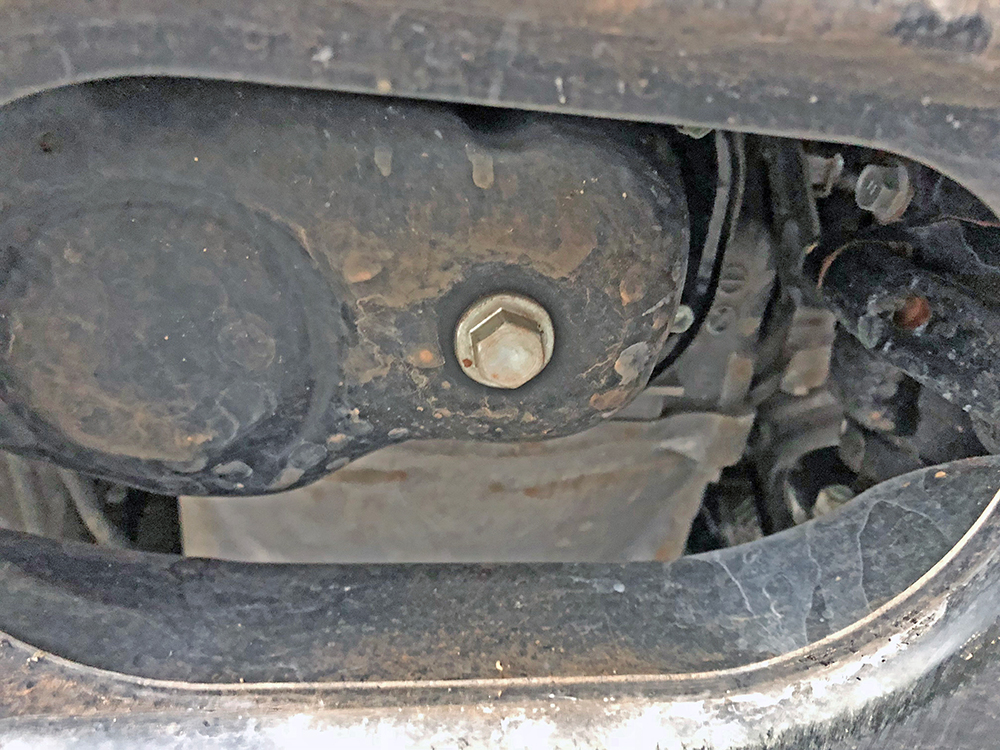 Prepare to remove the oil drain plug and drain the oil from your 4Runner. In order to do so, you will need to have a container to catch the oil that spills below. Although, some oil is lost from the vehicle operation, plan for at least 6.6 quarts to come out (as this is how much you put in).

Make sure to hold on to the drain plug and try not to drop it in the oil catch container. After you remove the drain plug, oil will come out quickly so be prepared to move your hand out of the way and let the oil drain into the container.

In the meantime, you can go ahead and wipe any contaminants from the drain plug with a clean microfiber cloth. After doing so, set the drain plug aside until later. 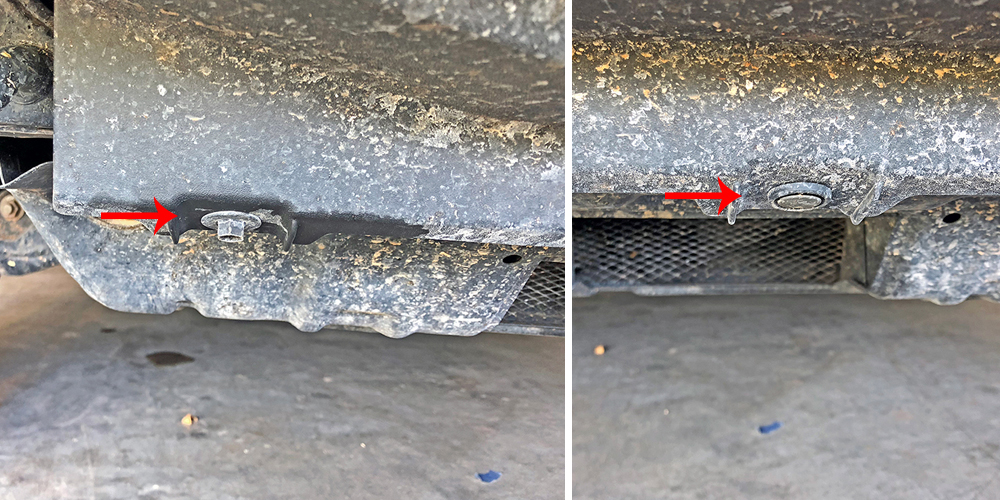 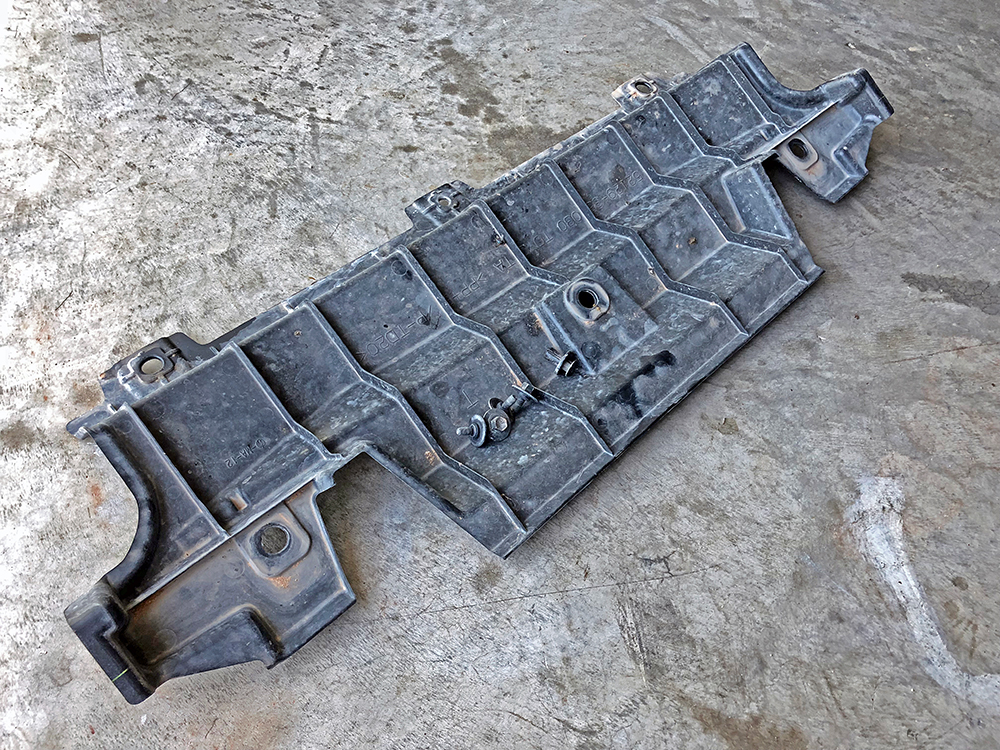 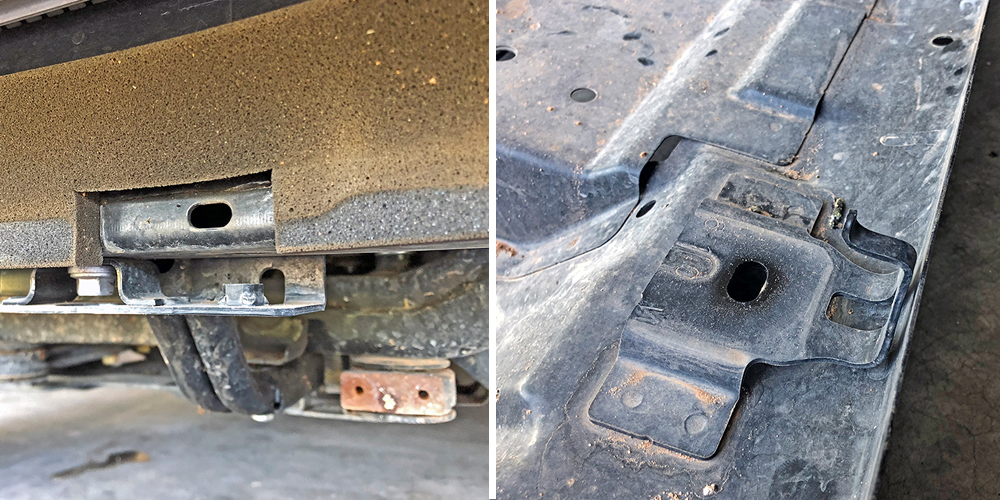 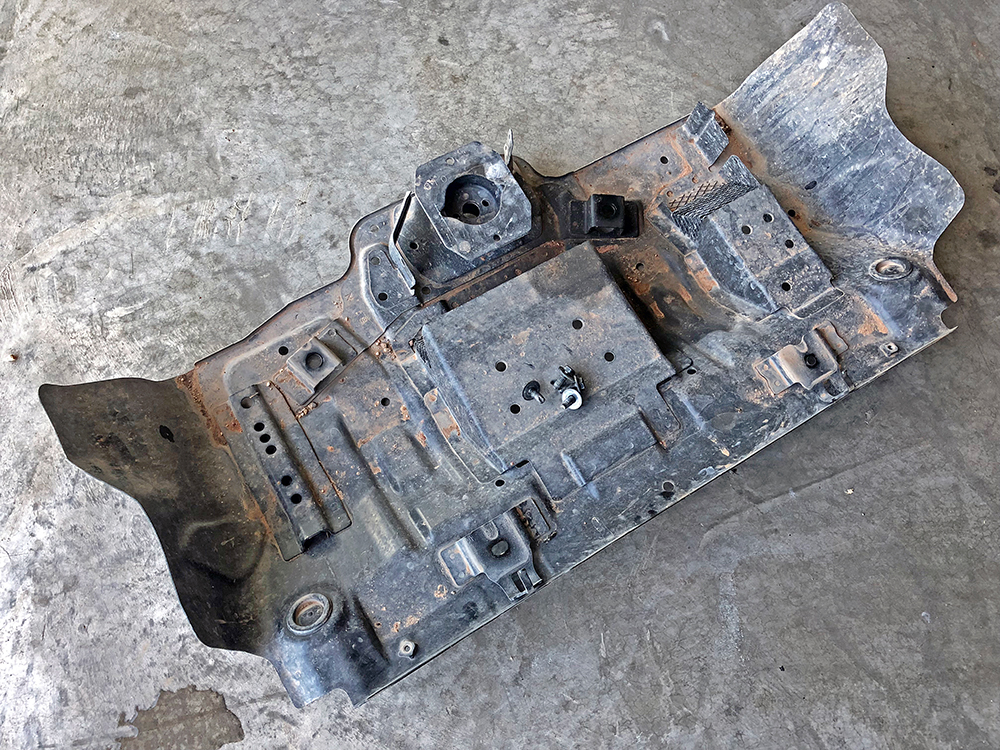 At this point in time you will want to remove the oil filter – which I think is the most complex part of the entire process, but still pretty straightforward. Before you remove the filter go ahead and reinstall your drain plug and the small skid plate that covers the drain plug. After doing so, move the container you are using to catch your oil so that it is underneath the oil filter. 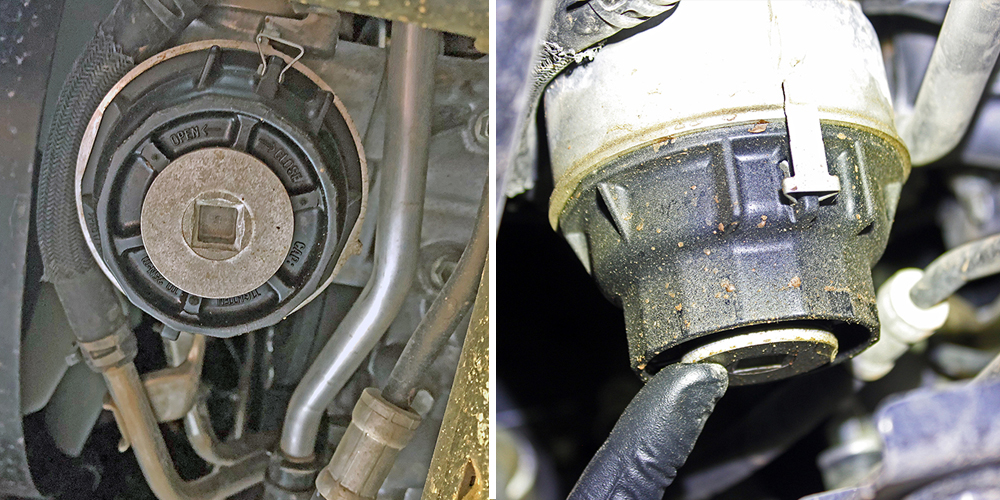 Using a ratchet with a 3/8-inch extension remove the metal plug to the oil filter. Some oil will drip out so make sure you have a container to catch it. Your new oil filter should come with a plastic tool to further drain out some oil. All you have to do is push it into the base of the filter. Oil should drain out after doing so. Wait until the oil has finished draining and then remove the plastic drain tool. Along with removing the plastic drain tool, a small O-ring should also come out. This is trash, so go ahead and throw away the drain tool and the small O-ring. 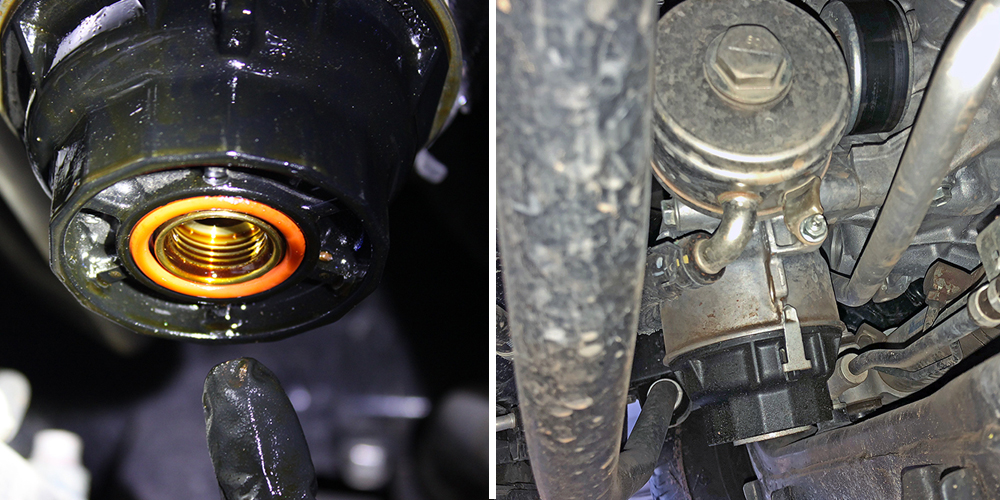 Now you can remove the actual filter. Use your 64 mm filter wrench and take off the filter housing. Make sure to note a small metal tab on the side of the housing. This tab should align to the same location when putting the filter back on. After unscrewing the filter all the way, remove the old filter from the housing and throw it away. 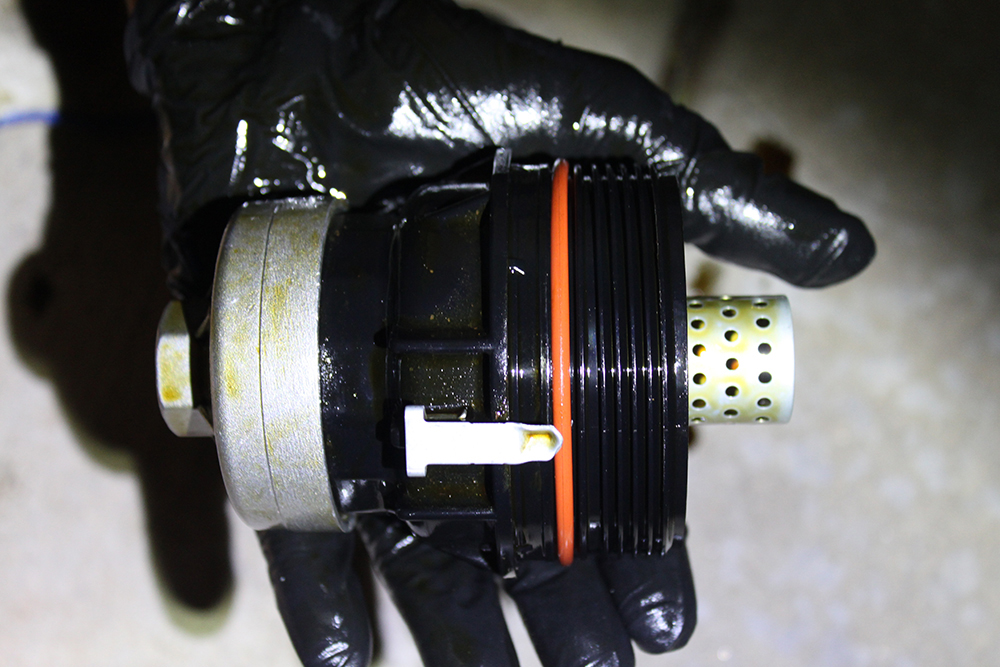 There is also an O-ring on the housing that needs to be removed. You do not need any pry tools and should be able to remove this O-ring by hand with ease. I’d recommend doing this by hand as you don’t want to damage the plastic threads.

Grab your new O-ring from the filter box and coat it with a small amount of oil. After doing so place it on the filter housing. Make sure it is seated all the way around. Next, place your new filter into the housing. You don’t have to worry about orientation as there is no right way up.

Step 8 – Screw the filter assembly back in 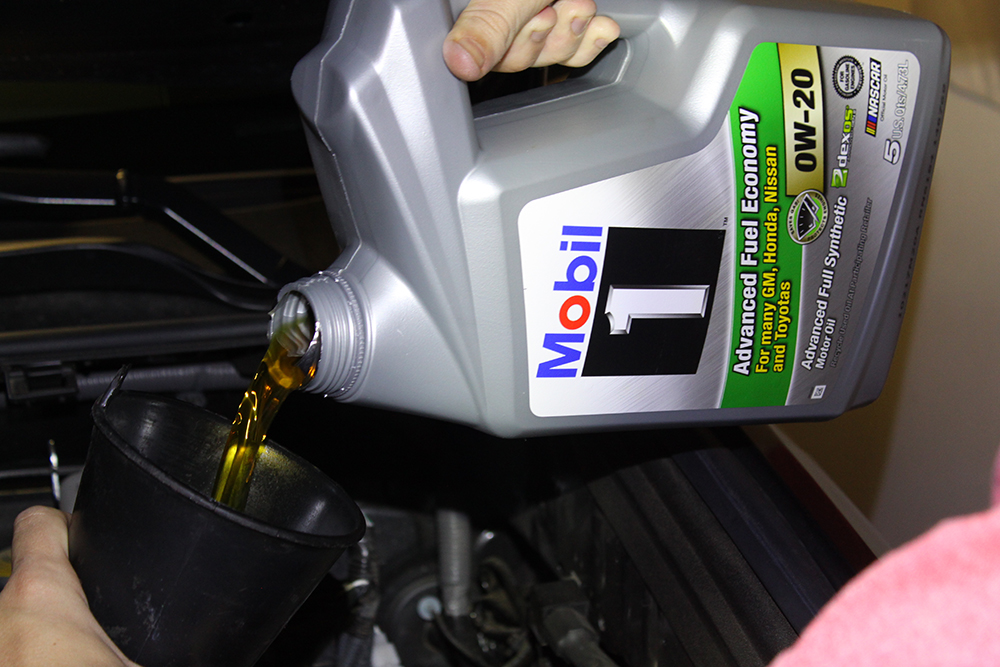 After verifying that your drain plug and oil filter are back in place install 6.6 quarts of 0W-20 oil into your 4Runner. Use a funnel for this as you do not want to spill oil on your engine.

When you finish installing all 6.6 quarts of oil check around the drain plug and filter housing, make sure there are no leaks. If you can’t spot any you can go ahead and install the skid plate and skid plate cover. 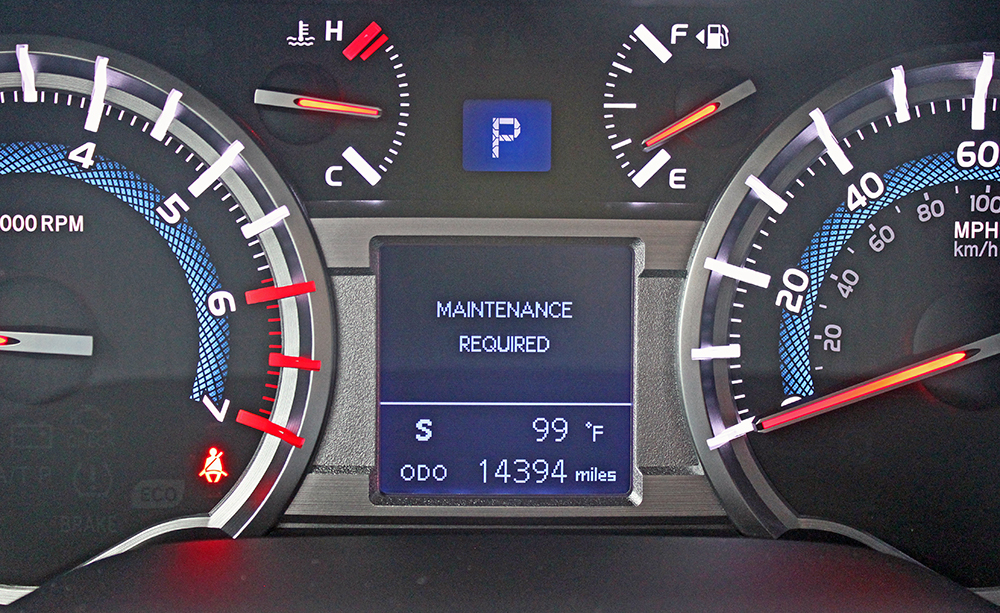 Now that you’ve completed the actual oil change procedure you need to reset your maintenance light so that you know when to change it again. To do so you will need the key to your vehicle.

Turn your key to accessory mode (far as the key will go without actually starting the vehicle).

Verify your odometer is showing Trip A. If it isn’t, press the knob to the right of the speedometer to go to Trip A.

After verifying it says trip A, turn the key to the off position. Press and hold down the odometer button and then turn the key back to accessory mode. The screen should show the maintenance resetting.

Continue to hold the odometer button until the maintenance light has been reset. After doing this, you are good to go for another 5,000 miles.

Although there are some cars out there that make it a little easier to change the oil, the 4Runner’s oil can be changed relatively easily and in a short amount of time.

Since the 4Runner is capable of going in some pretty rugged areas, you need to take the time to maintain your vehicle as best as possible and prevent any potential damage from occurring.

Taking the time to change your oil every 5,000 miles with a quality synthetic, such as Mobil 1, will only benefit your vehicles performance, longevity, and reliability out on the trail and on the open road.

Question, the Mobil 1 Extended Performance full synthetic says the oil can last 20k miles. What’s the suggestion for oil changes based on that? Also what’s the filters life?

Awesome write up and thanks for the guide. Here are some tips for a 21 4runner (TRD ORP) that I learned during my first oil change this weekend:

Everything else works the same. I did notice that when torquing the filter assembly to 18lbs the metal tab went slightly past where it was originally (maybe 1cm) but I’m not too concerned.

thanks for the great write ups!

I always add a Fumoto valve instead of a plug to anything I buy. https://www.fumotousa.com/

The current generation has an oil cooler in form of heat exchanger (coolant cools the oil). Its right on top of the filter. Thats why they move it down there.

Nice guide and pictures! Here’s a list of all the nitty gritty fluid info:
https://www.toyota-4runner.org/5th-gen-t4rs/285126-beginner-fluid-maintenance.html

Oil is a pain. Transmission is a friggin’ nightmare. No dip stick and a Rube Goldburg process to get the temperature to a certain range so overflow happens and then… Oh forget it. It’s too frustrating to detail it out here.

Just got my 2019 in December after having an FJ for 12 years. Great vehicle but a pain to change the oil. Removing the whole skid plate to get at the filter? Why couldn’t they have put a hatch there like they did for the drain plug? And the push pin on the plastic piece? Why. Anyway I still love the truck and it will be less painful next time now I know the tricks.

Clint’s articles are the BEST to help me fully understand the capabilities of my 5th gen 4Runner Trail, especially the deep dive on 4WD systems. Thanks Clint!

Thanks Eric! I really appreciate it!

It’s some work and you have to torque the filter canister to 25lbs ,the little plug under that 10lbs .I love my truck so I will put in the effort.

Agree this is the most complex oil change process of any car I have owned.

total bullshit that Toyota when back in time to change oil filter from spin on to canister type from the 1950’s . for those that change there own oil I recommend baxter performance filter adapter!

I would be extremely careful using any aftermarket products for critical components. It is a bummer that it’s a pain to do a simple oil change, but to be fair, taking off the skid plates and the front plastic cover is way more time consuming. Lastly, virtually all oil filter assemblies have what’s called a Bypass-Relief-Valve (BPRF). If your filter gets clogged or you’re towing heavy loads all the time and the BPRF isn’t made well enough, you could deprive your engine of oil and severely damage your engine.
Just something to think about.

This is actually forward thinking, to reduce waste. Permanently bonded paper/gauze/metal filters are detrimental to the environment.