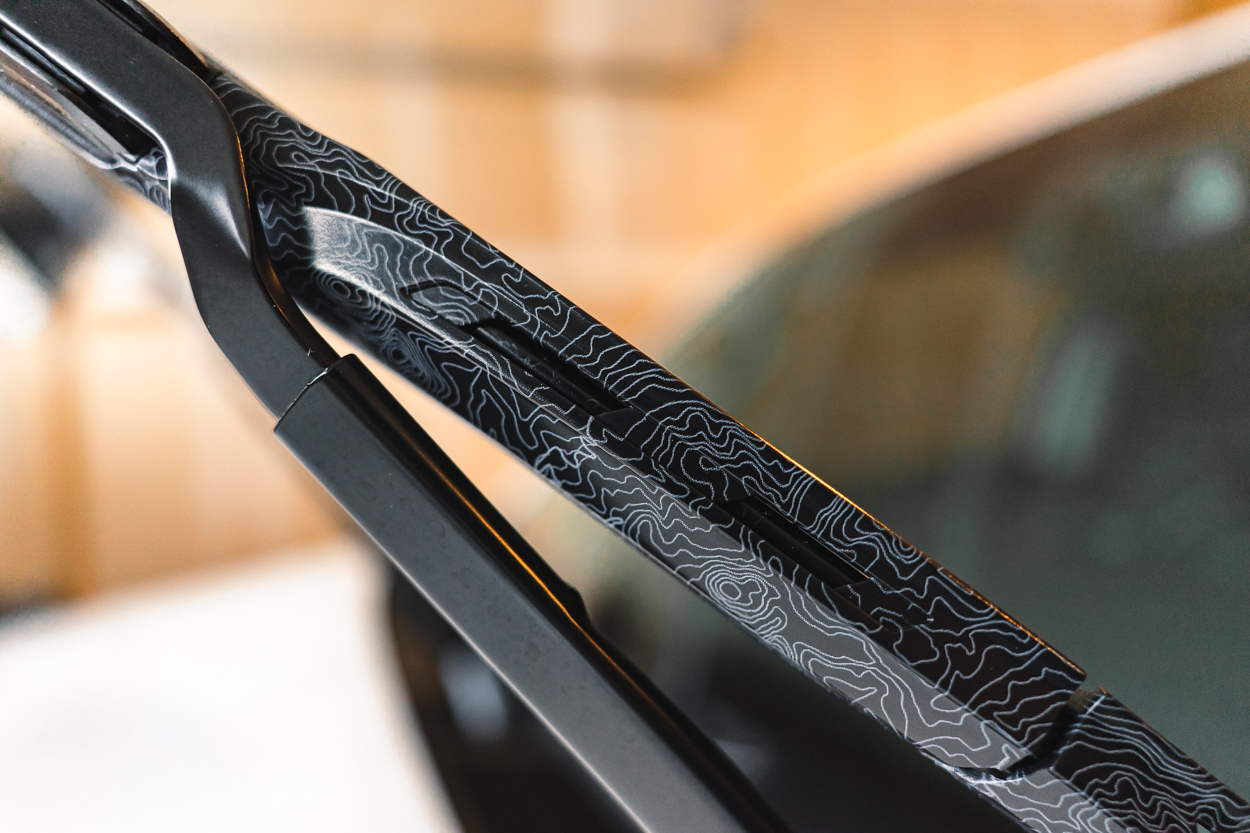 Windshield wiper blades are boring – they’re a necessary item that needs periodic replacement and nothing more. You typically have your choice of black or black, and some fancy marketing jargon that promises superior performance compared to the other brands. 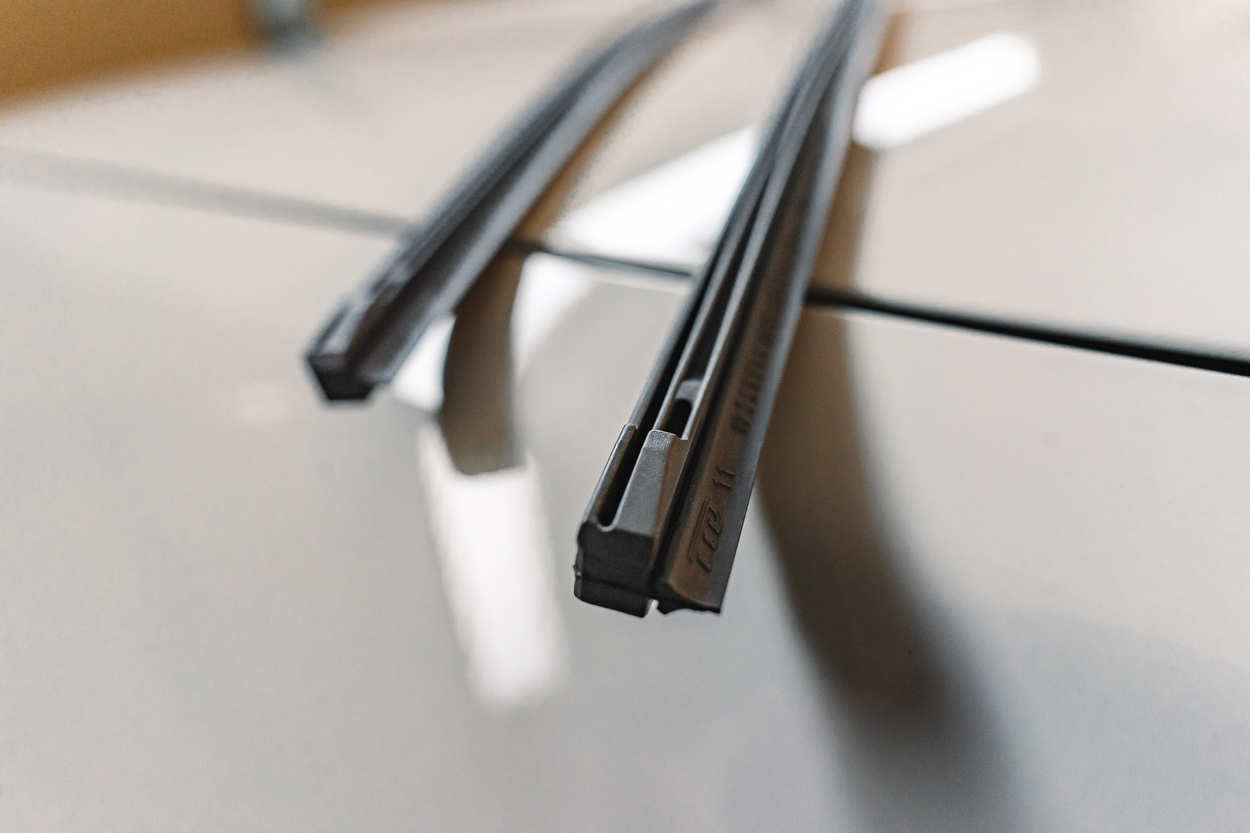 I know what you’re probably thinking, “how can a set of windshield wiper blades really be that different?”. I’ll admit that I thought the same until I realized that this was likely the last set of wiper blades that I’d ever have to buy.

While it’s possible to buy replacement rubber inserts for the factory windshield wipers or perhaps even some aftermarket ones, have you ever tried tracking them down? I have in the past, and when I managed to find some, they were selling for the same as what a new pair of decent wiper blades was. Mox Motors sells individual replacement inserts for $5/piece in sizes 20″, 22″, 24″, and 26″.

That’s really the appeal for me; no non-sense wiper blade replacements that I could easily find when I needed them.

Maintenance aside, the natural rubber material of the wiper blade inserts is good for 500,000 wipe cycles. Even with living in the PNW, that should last me at least a year before they need replacing. They’ve also been tested for temperatures from -40F to 131F. I don’t think I’ll be driving in either of those extremes anytime soon, so I have no concerns there. 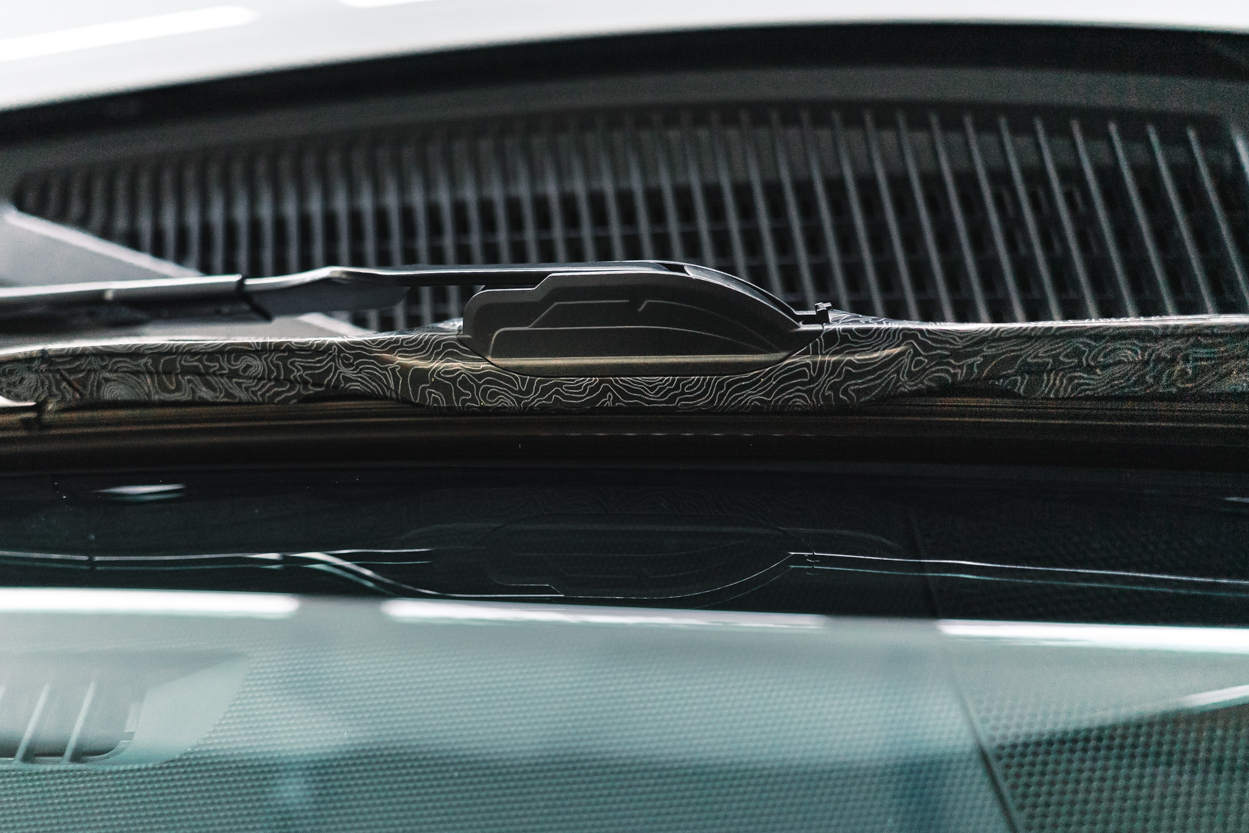 The wiper blades have a hybrid design, with the outer structure being a plastic shell and the inner parts being metal. Mox Motors claims that this type of design should prevent snow and other debris from clogging up the wiper blades.

From an aesthetics standpoint, no two sets of wiper blades are the same. Mox Motors hydro-dips each set, so the finished result is slightly different.

If you’re unfamiliar with the hydro-dip process, it’s essentially a bath with a particular design resting on the top of the water. As an object is dipped into the water, the design layer at the top clings to the object and is permanently adhered. When the object is pulled out of the bath, it looks like someone hand-painted it; it’s a pretty cool process. 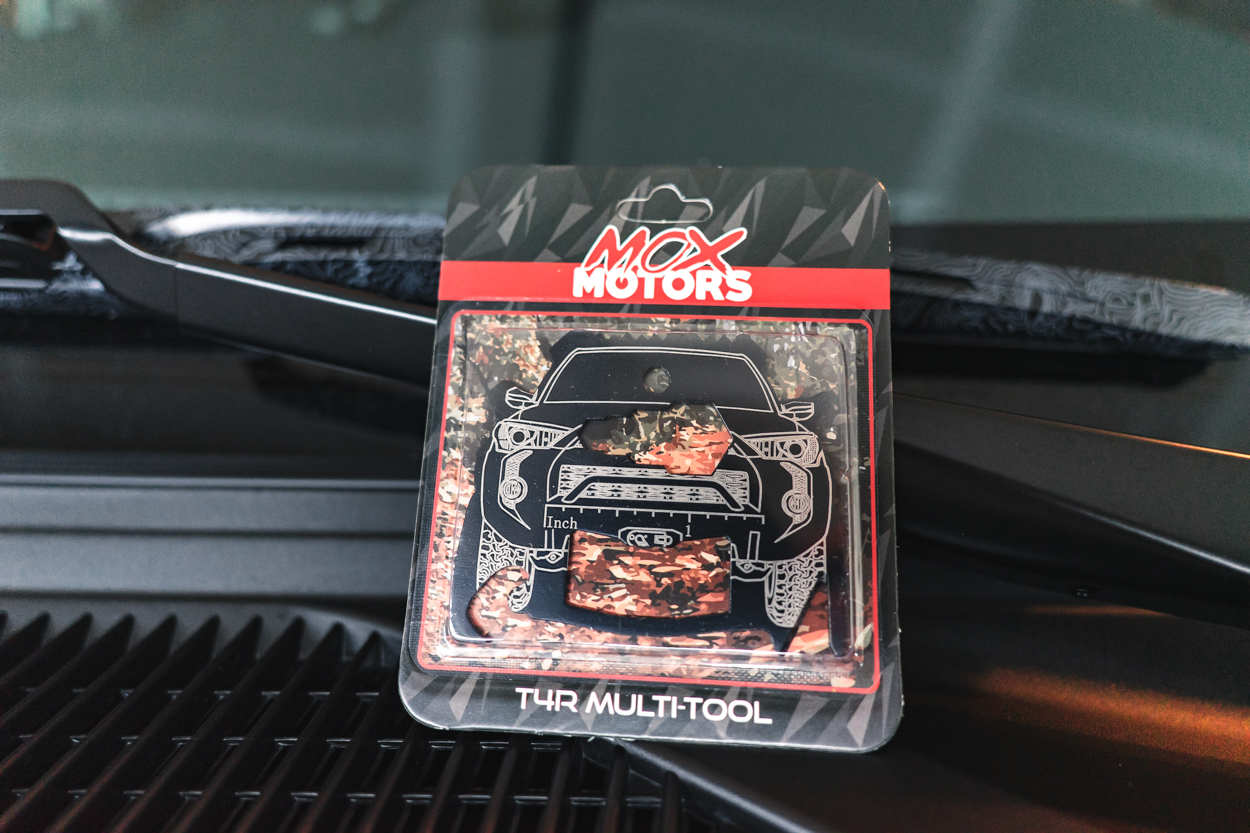 Mox Motors also makes these wall-insert multi-tools in either the 4Runner, Tacoma, or Tundra design. I’m a bit fan of these slim multi-tools and have used them on occasion in hardware stores, especially when I need to cut the straps on a new batch of lumber that hasn’t been picked over. 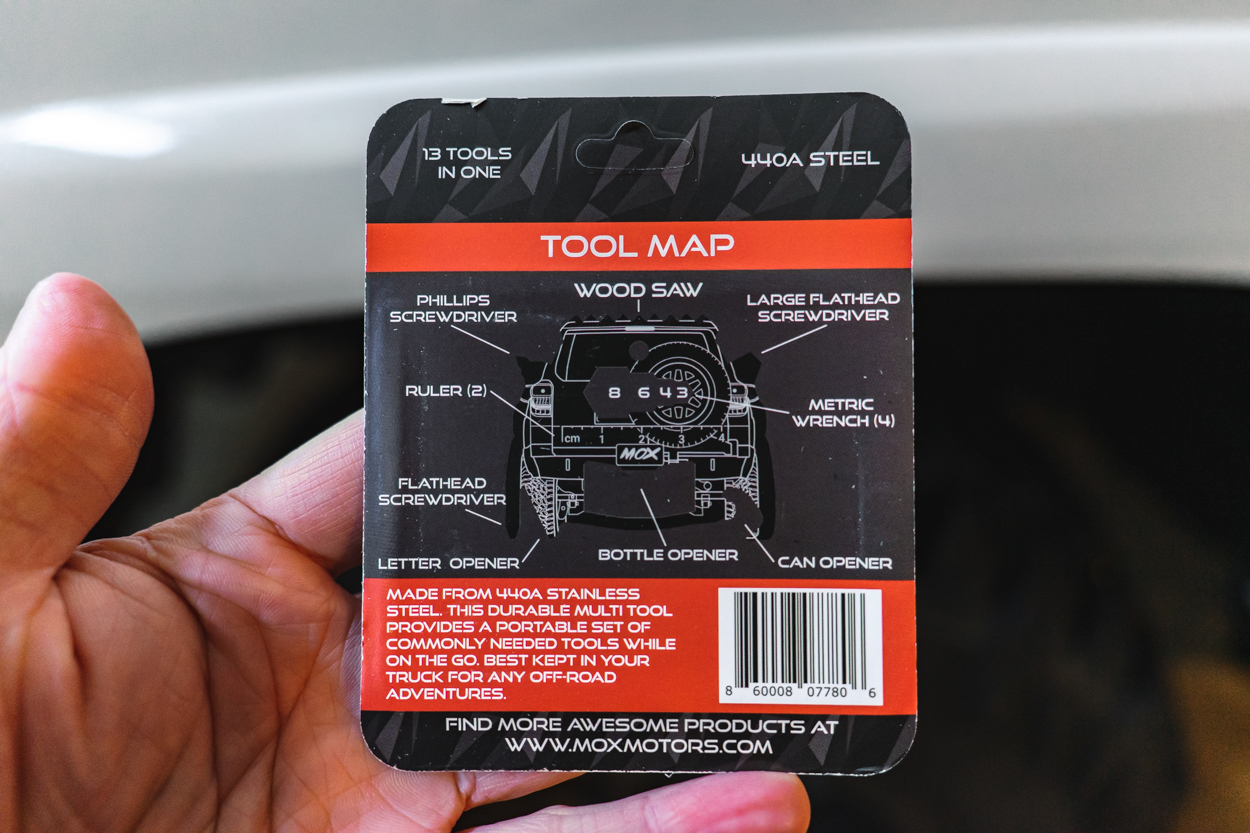 Regardless of which design you choose, each multi-tool includes the following:

The tool itself is made of 440A stainless steel and powder-coated black, so it should withstand any force you’ll be able to impose by hand. 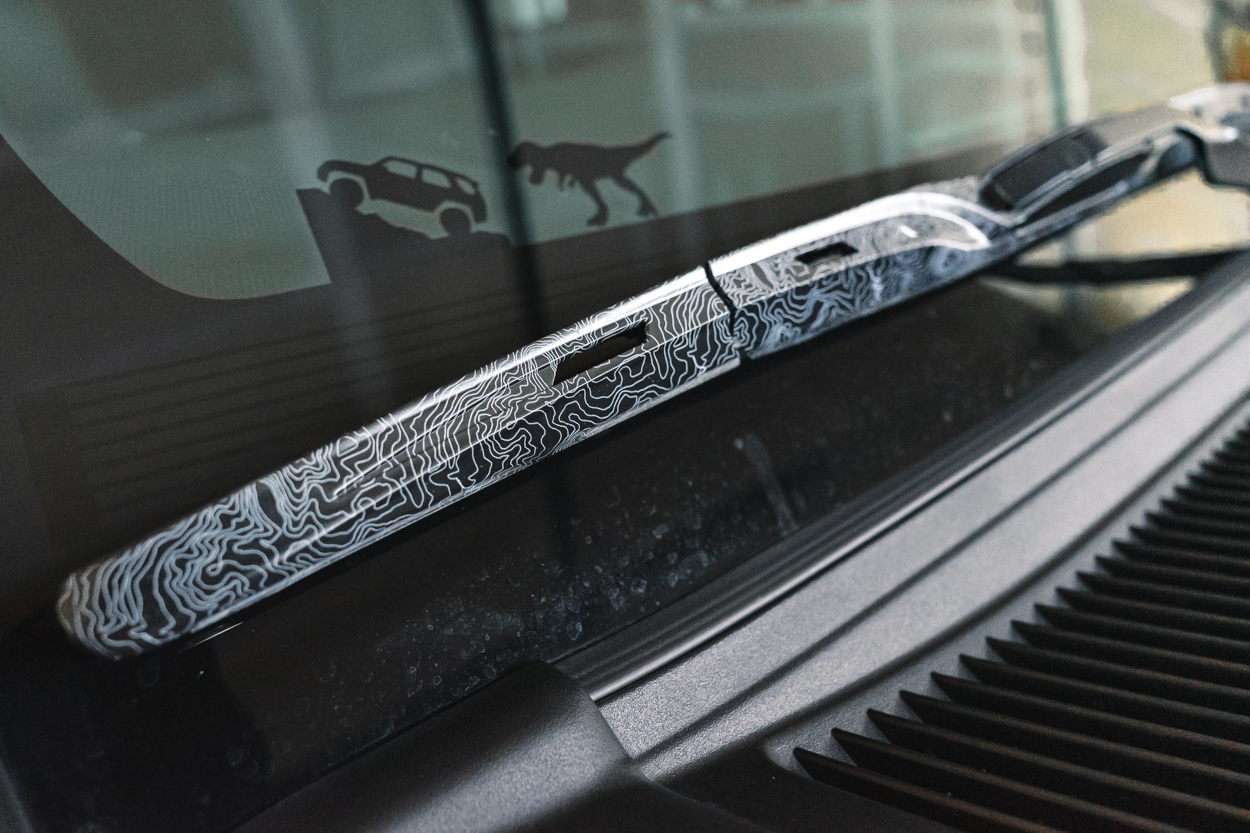 At first, I wasn’t sure how I liked these topographic windshield wipers. I’m not a very flashy person, nor is my build. However, I now see that these are subtle enough that only a keen eye will really notice them. I also think that the white topo pattern pairs well with the Super White color of my paint.

As I mentioned above, what I’m really looking forward to is not having to buy an entirely new wiper blade set. As long as Mox Motors continues to sell the replacement inserts, I’m good to go.

From a performance standpoint, they work just as well, if not better than the factory windshield wipers. Time will tell if they hold up, but I’m confident that they will.

how do they do at speeds over 35MPH? Any chatter or dead wipe areas from the wind lifting them?

No movement at highway speeds and even wiper coverage!

I hate to admit it, but I kind of like them and would definitely run them on my own rig.

I was hesitant at first too, what sold me was the replacement rubber inserts. Now if just one wiper blade needs to be replaced, I don’t need to buy both just to make sure they match haha.