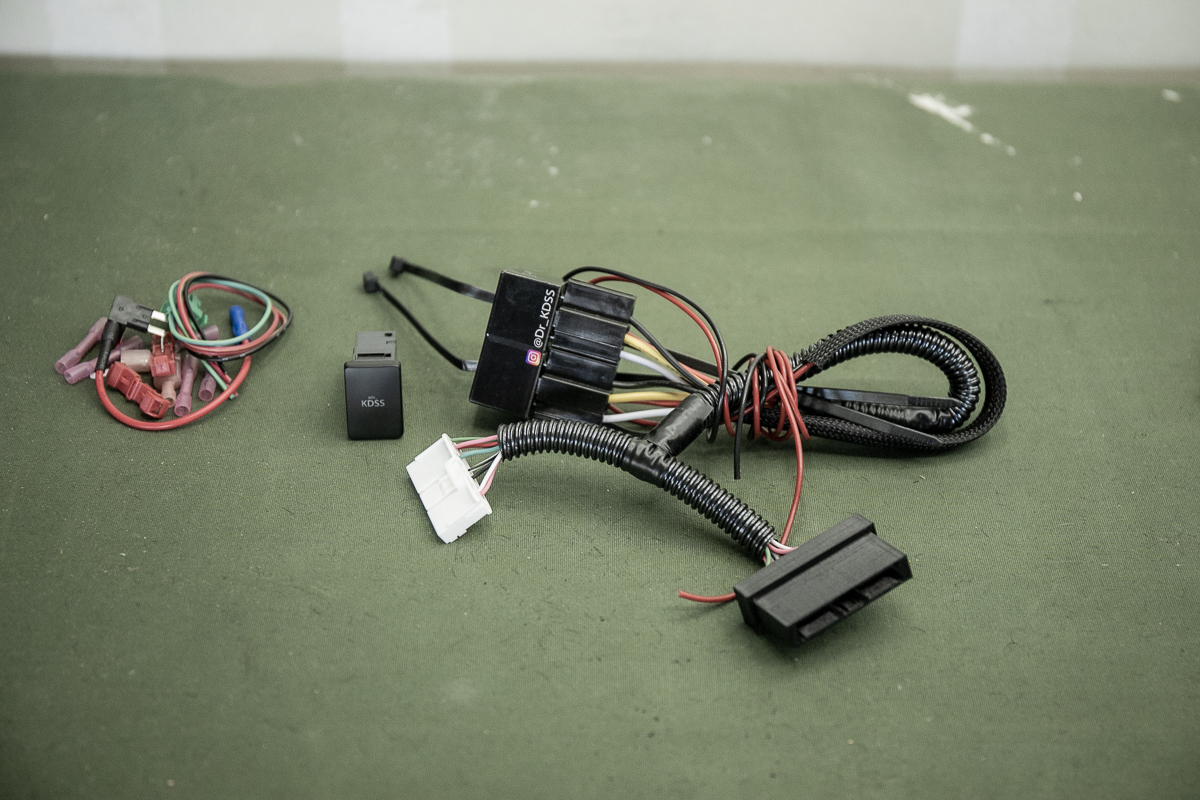 The main benefit of this mod is that you can turn KDSS on or off at any speed with the push of a button. It’s a switch that allows you to turn on/off (as the name implies) your KDSS system’s valves. When the switch is turned on, it turns KDSS off. When KDSS is off, the system valves stay open at all times. That means they will not close over 12mph.

In a normal KDSS application (without the switch), the system’s valves are open under 12mph and closed at speeds of 12mph+. Under 12mph the KDSS valves are open which allows for the oil/piston’s to move freely through the interconnected hydraulic lines. Over 12mph it closes the Valves which puts pressure on the lines ultimately making your ride more controlled, and stiffer. So with the switch enabled (KDSS off) this keeps the valves open at all times.

KDSS is great on-road but off-road the stiff sway bars add some rigidity to your ride quality when you’re pushing over 12mph off-road – especially if you’re not aired down. When KDSS has been activated over 12mph and you’re on the trail, it’s stiff, somewhat rocky, and can be quite jarring on the body. With KDSS off when off-roading over 12mph, however, the ride is much more comfortable and forgiving. It’s a much more enjoyable experience when hitting whips, dips, and ruts when KDSS is off.

What Does the KDSS Dr. Recommend?

You really feel it when off-roading and driving around town. My recommendation is to have it in soft mode when off-roading (off) or driving around town under 40-50 miles an hour. Then once you get on the highway and start hitting 50+ speeds, you can turn on KDSS and revert back to the factory speed-sensitive stiff mode. If you have a heavy load or you’re towing, you want to have the factory mode engaged. You will enjoy your ride even more having more control of how it feels, both on and off. If the KDSS light is on it stays in soft mode. If the KDSS light is off it acts like normal and is speed-sensitive. KDSS will be in the soft mode under 12 miles an hour and stiff mode over 12 miles an hour. – Dominick Dr. KDSS

How did get Dominick Dr. KDSS Get Started?

The KDSS switch actually started by Dominic when he was working with a company by the name of Blackgate Customs. Dominic has since left the company and has now redesigned the new KDSS On/Off switch. Previously, the switch was designed to connect to the harnesses along the frame rail near the KDSS actuator. Now the KDSS switch is located in the cabin near the gas pedal.

“I’m staying away from Blackgate”

“I’m staying away from the outside frame rail area where the KDSS pump is at. Other than me completely changing the wiring design due to an electrical theory, it’s also being moved to inside the cab because once you pull the connector off, it’s most likely not going to get the same seal it had from the factory. Trust me, all my data logging is proving that. Let’s keep it all inside away from the elements all with a new and improved wiring harness and integration system”. – Dominick Dr. KDSS

KDSS Switch – What is it 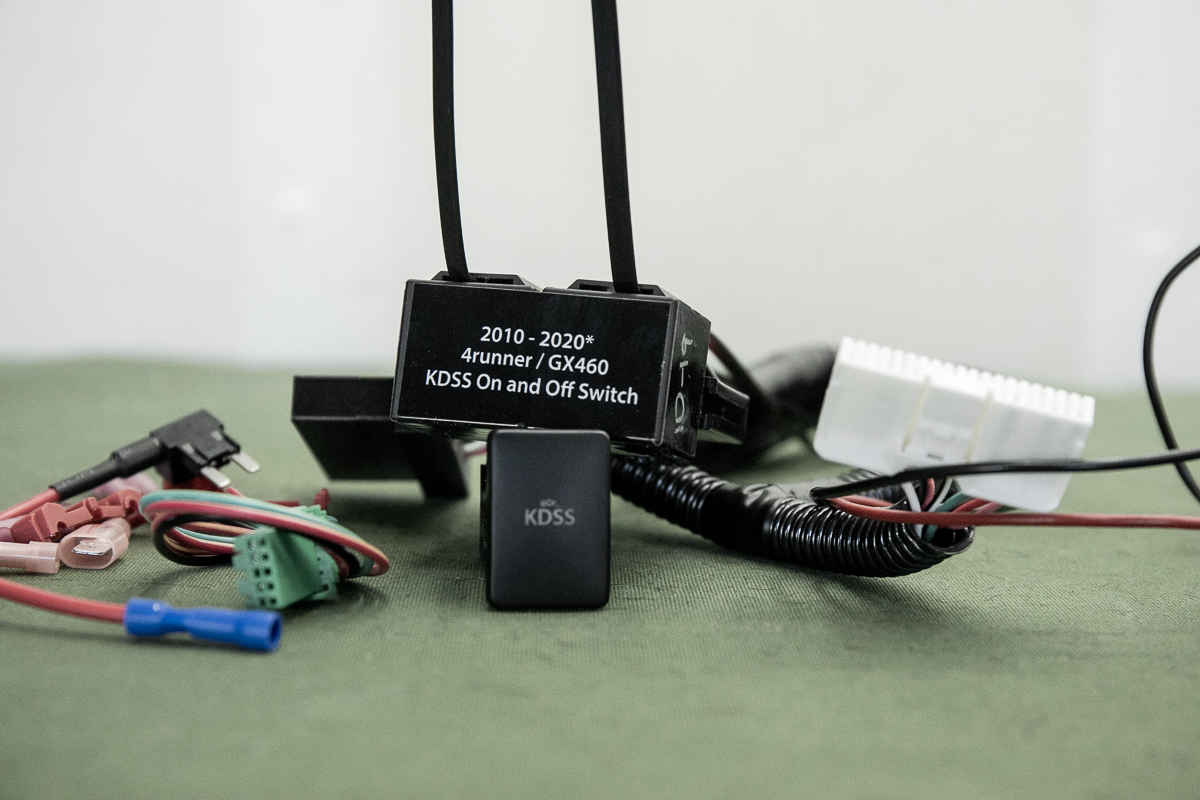 The new Dr. KDSS On/Off switch comes wired in a wiring harness with dual relays. It’s two connector harnesses that interrupt your KDSS electrical system, and then a positive and negative lead that you can connect to a switch of your liking. You won’t need to know how to wire relays as everything is pre-wired for you. Just connect the ground and hot for the relays and you’re good to go. 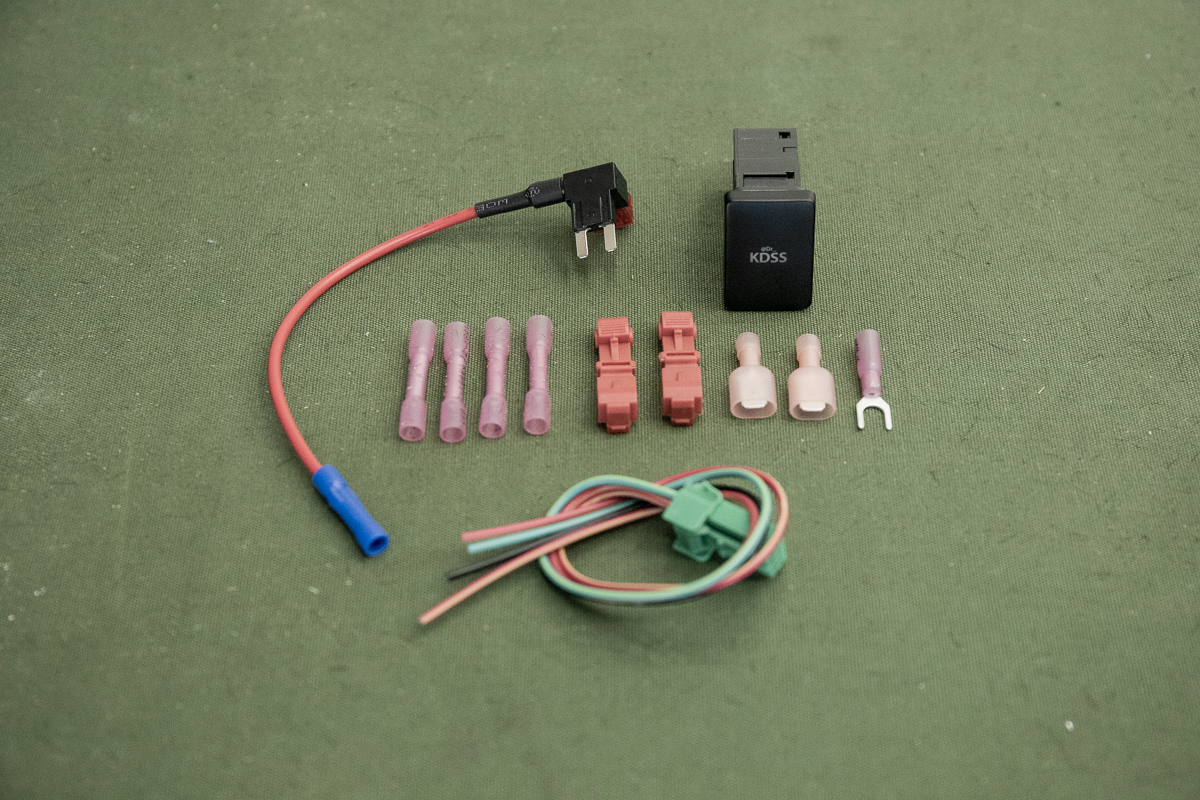 Some guys in the industry have reached out to comment on the KDSS switch on whether or not running a relay with the switch Pro or a similar device is a good idea. The complaint is extra amperage and the additional relay on one circuit can mess up the Switch-Pros main unit. To answer all those comments… I have almost 30,000 miles of testing the KDSS On/Off switch setup running on a Switch-Pros. – Dominick Dr. KDSS

He has stated that the actual relays on the switch will get warm but that’s to be expected and absolutely nothing to worry about. There are two relays on the KDSS Switch and the lead that will go to your Switch-Pros, when hot, is drawing .32 amps. Not even half an amp. 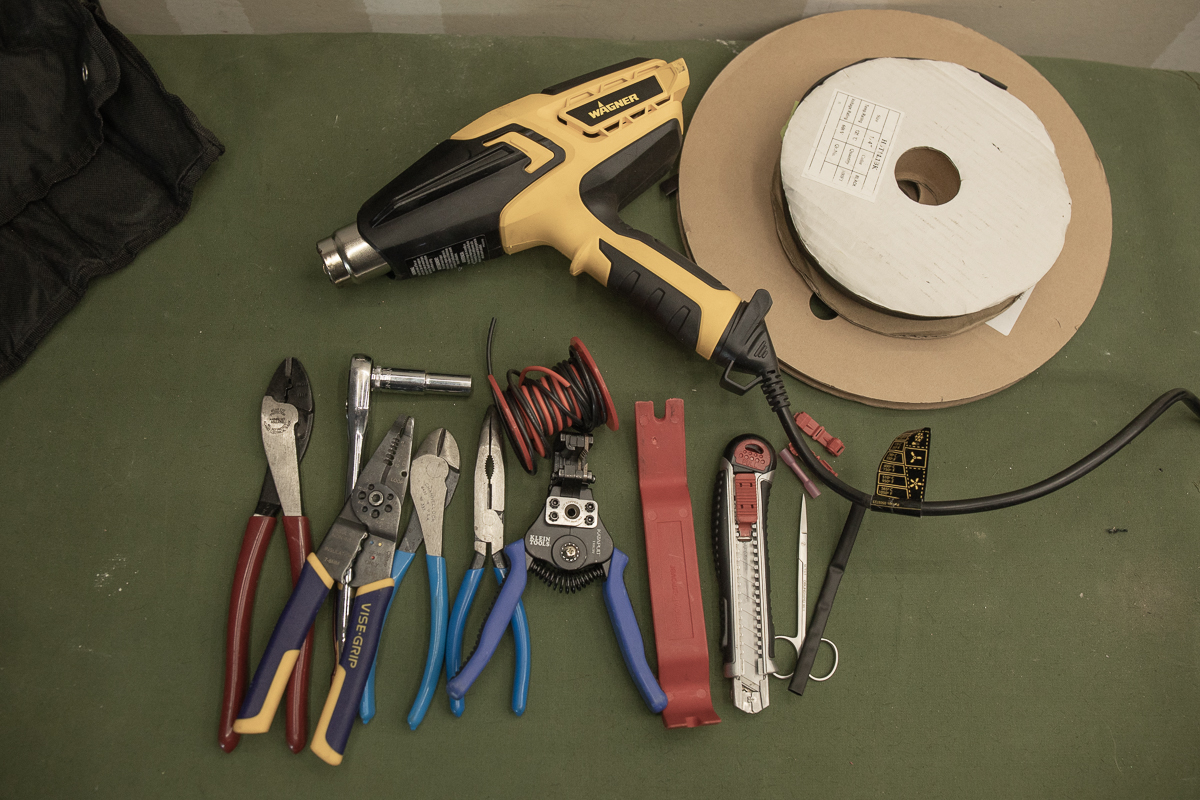 The first thing you want to do when you start installing the switch is to test it. Turn your 4Runner on “accessory” (on but without the engine running). Unplug the white connector from the KDSS module. KDSS light will come on the cluster. Plug it into the KDSS harness controller. Take the factory connector on the harness and plug it back into the KDSS module. The KDSS light will turn off. This is only to test your unit. If the KDSS light does not turn off, you may have a faulty unit. If the relay fails for whatever reason, it will revert back to stock. 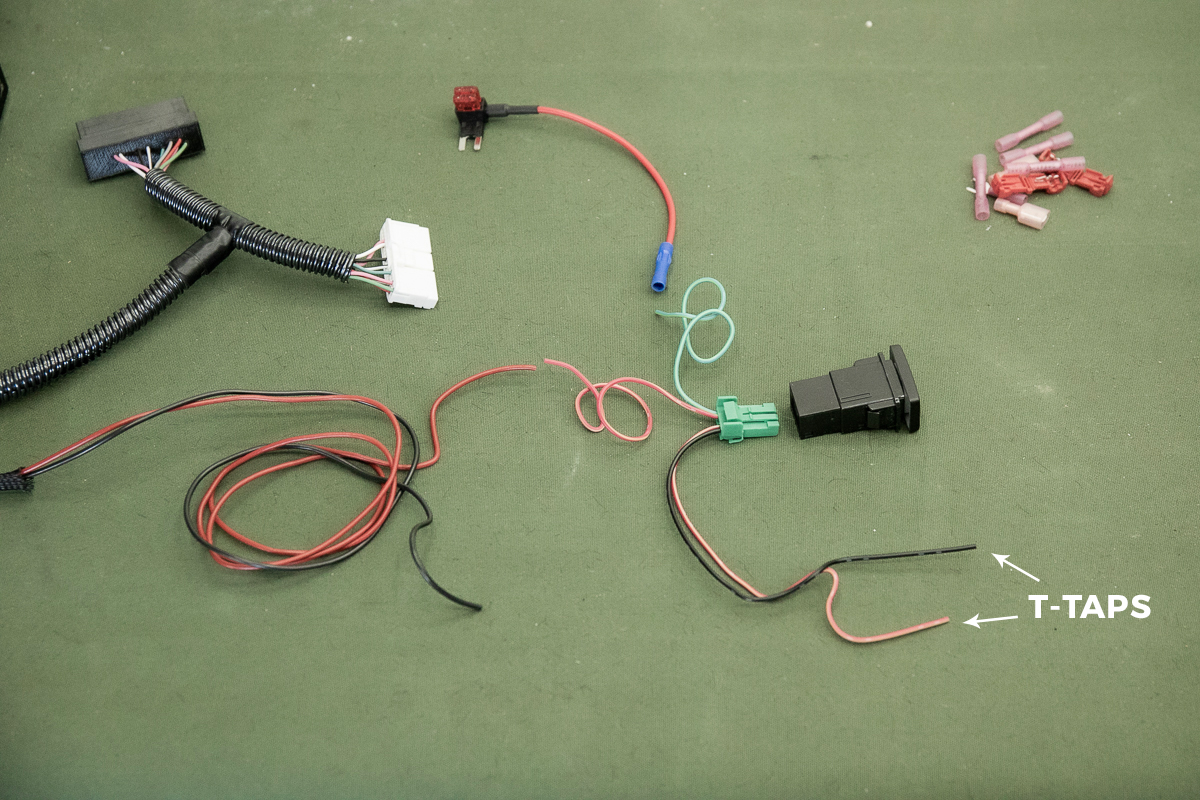 Here is a look at the wiring overview. 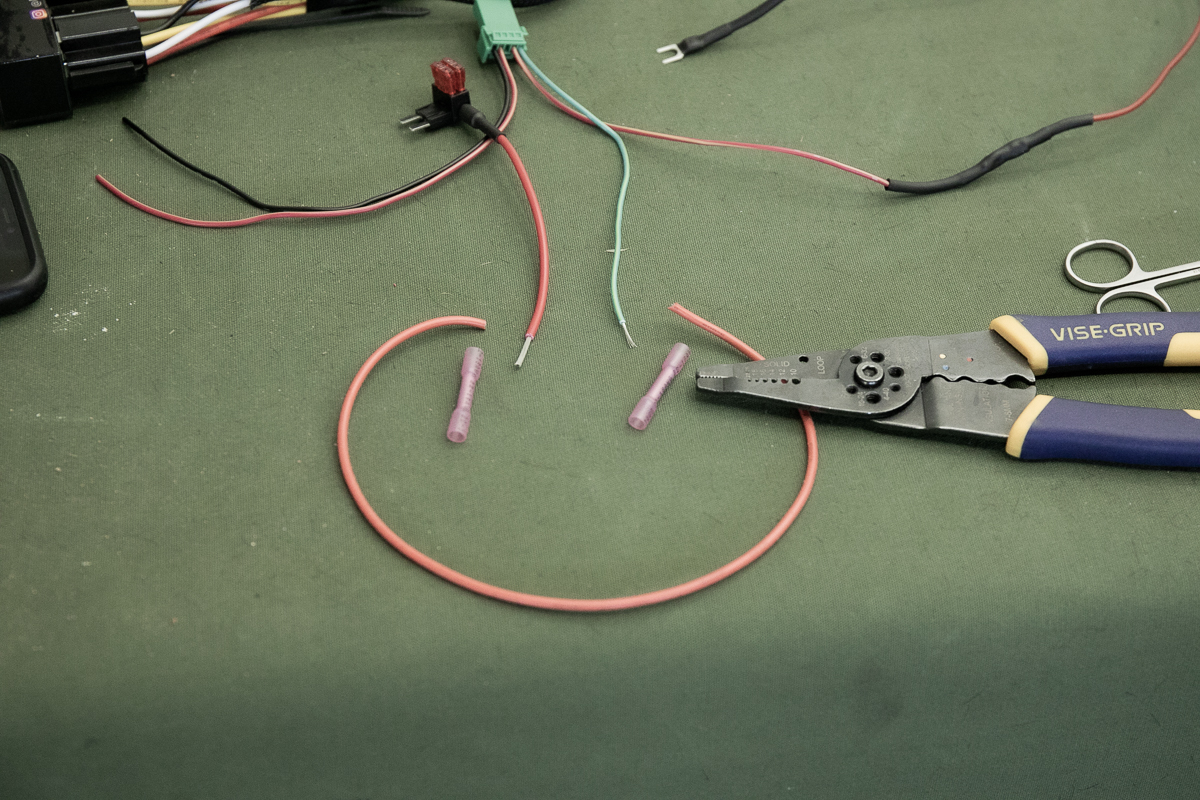 The green wire on the switch connects to the add-a-fuse. 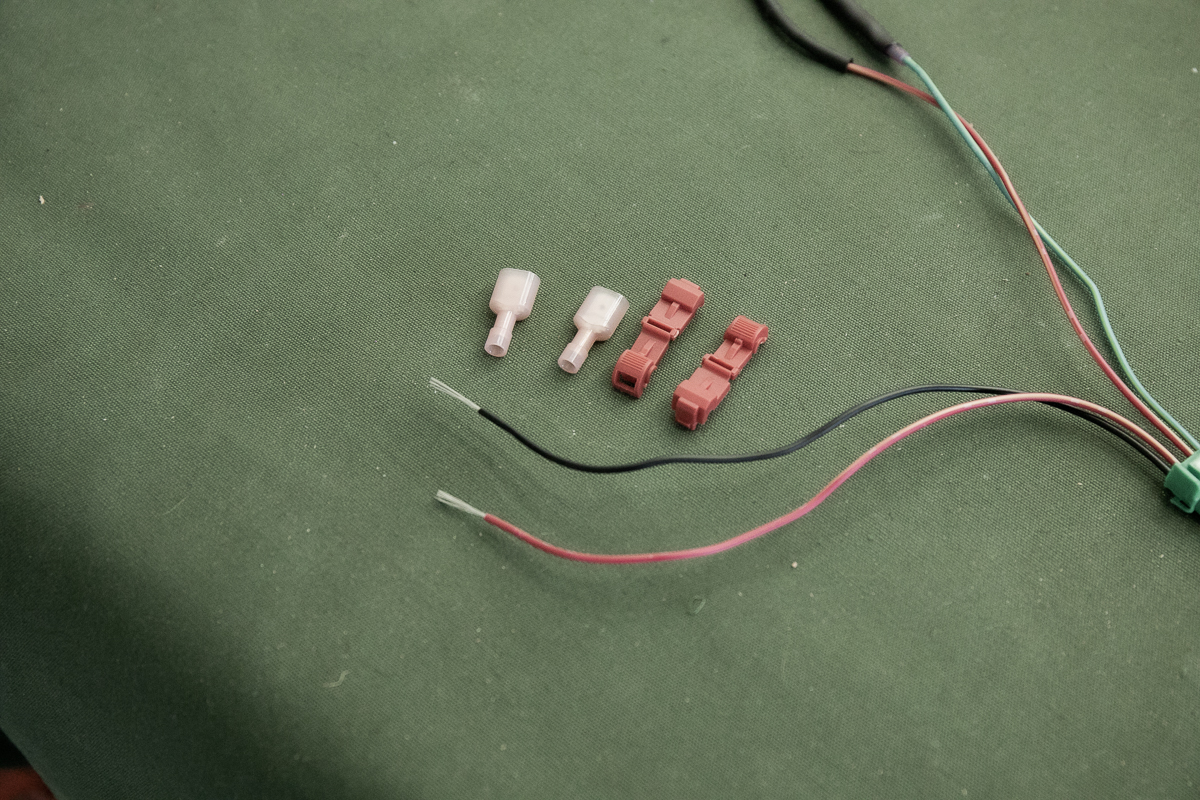 Connect your t-tap connectors to the red and black wires on the switch. 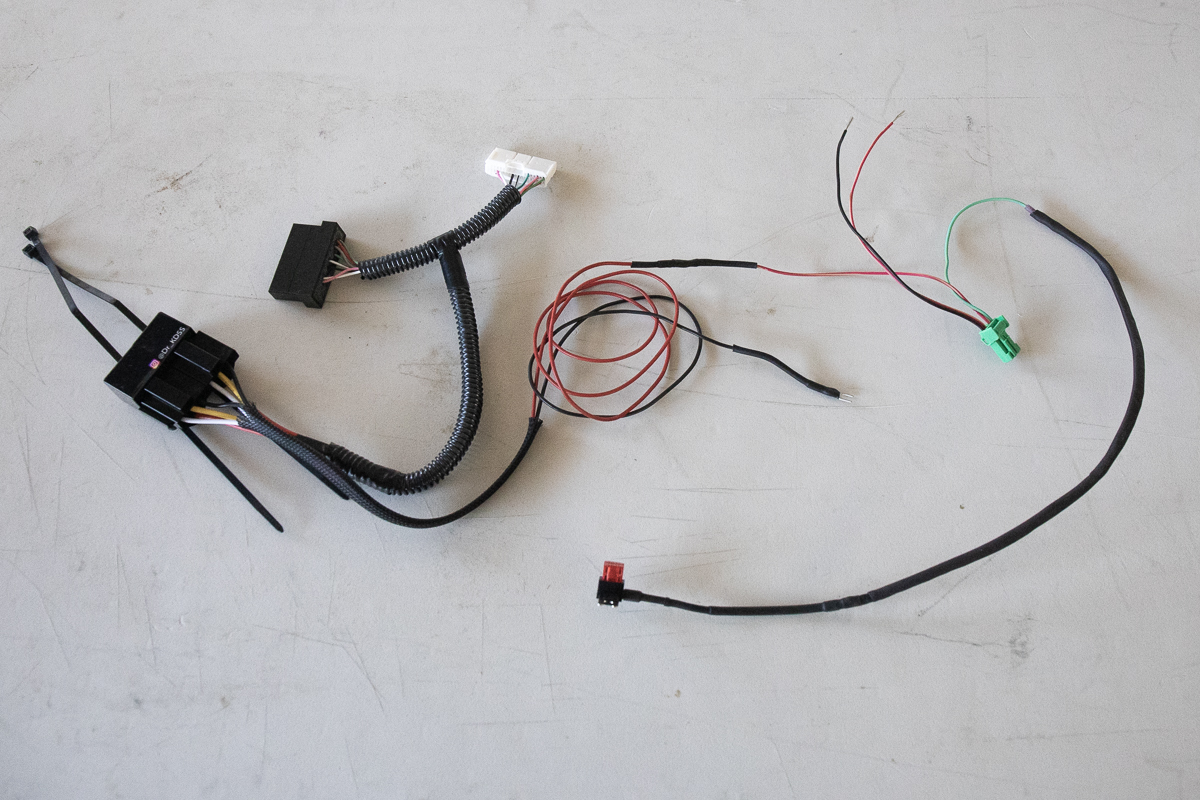 The main red switch wire connects to the red wire coming off of the KDSS switch harness. Now is a good time to also connect a terminal for the ground. 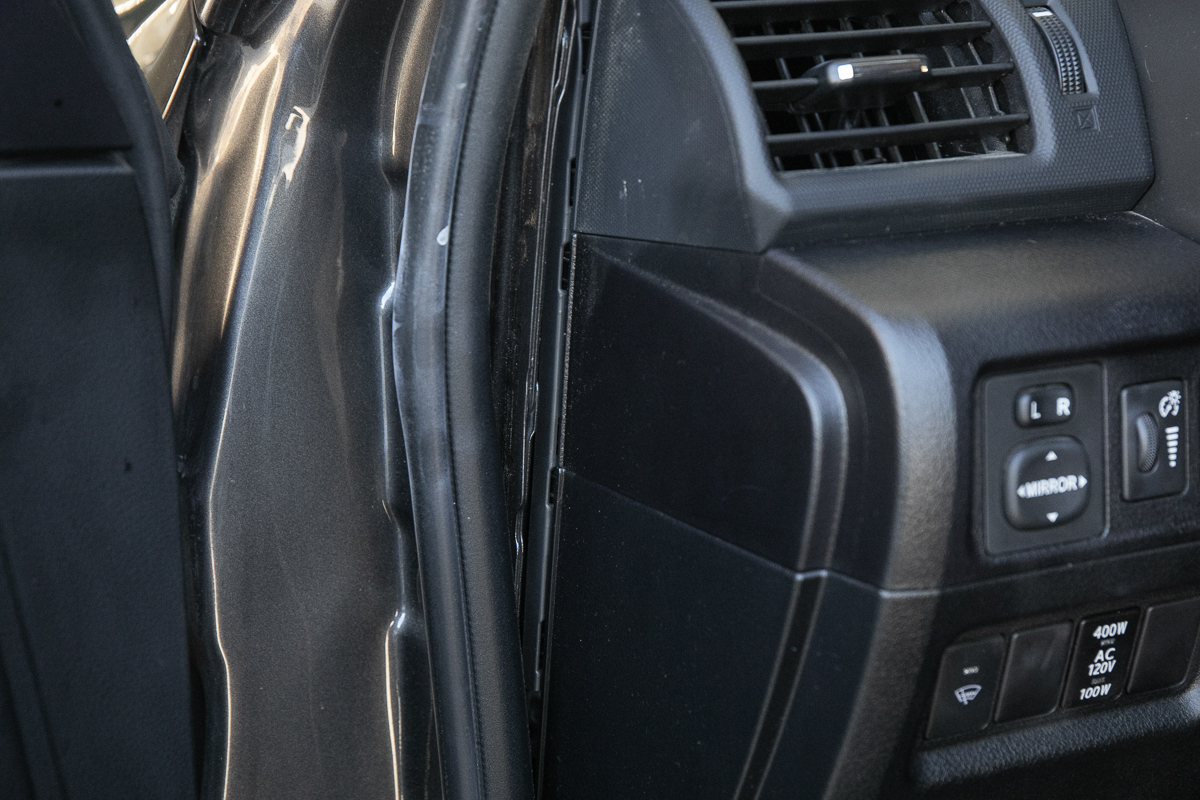 Let’s get that harness installed. Start by pulling back this weather stripping. 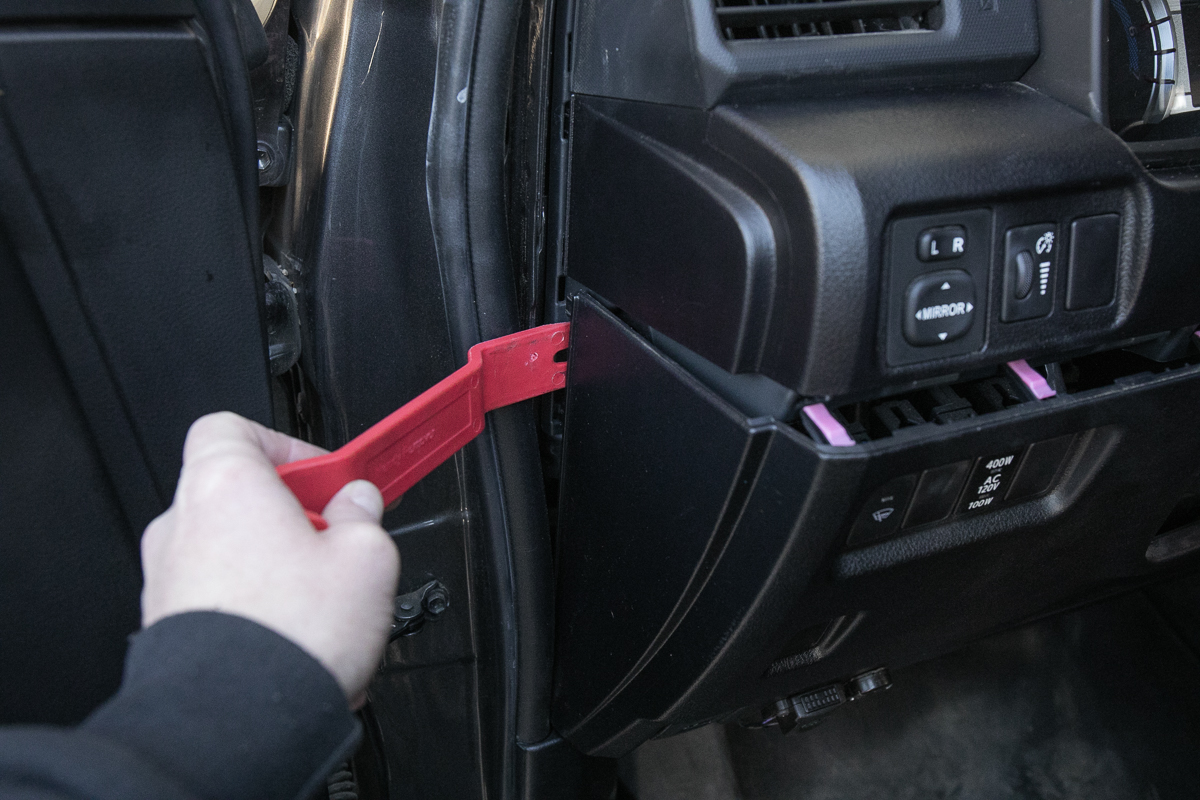 Take a pry tool, and pop this plastic trim panel off so you can access the switch blanks. 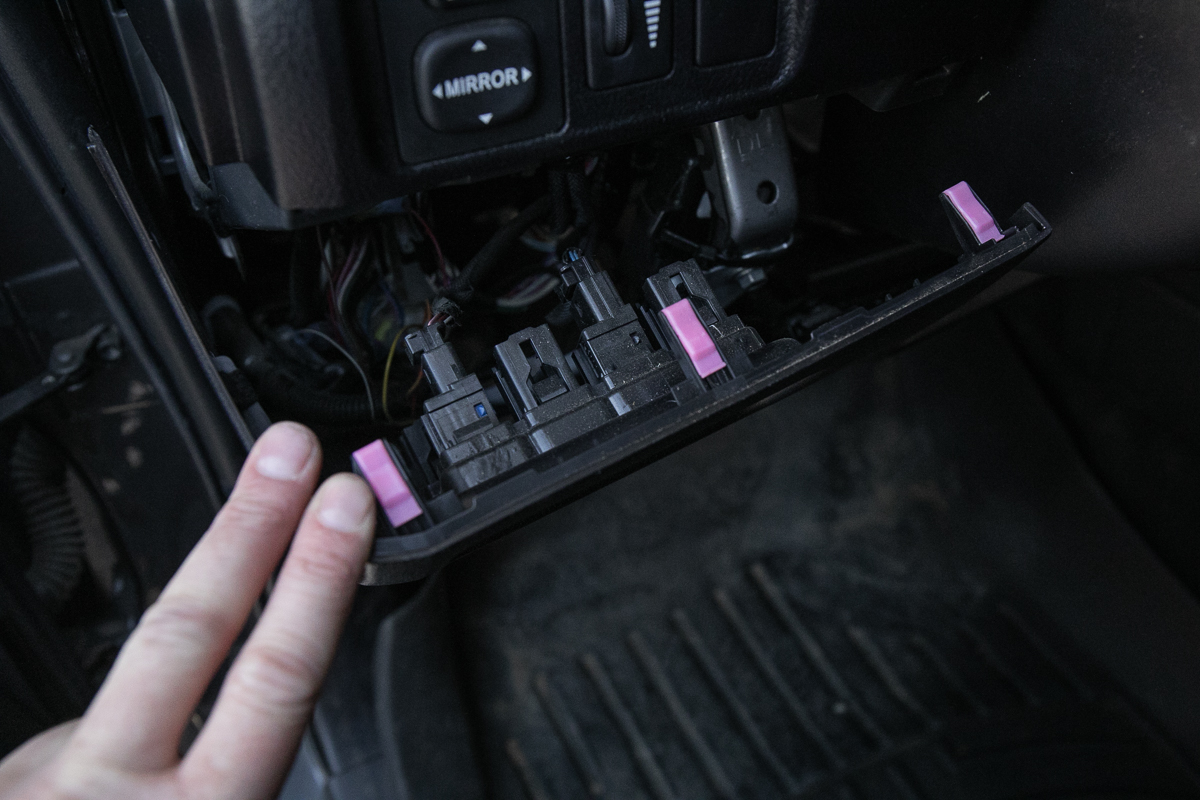 Squeeze the two tabs on the switch blank and pop it out. 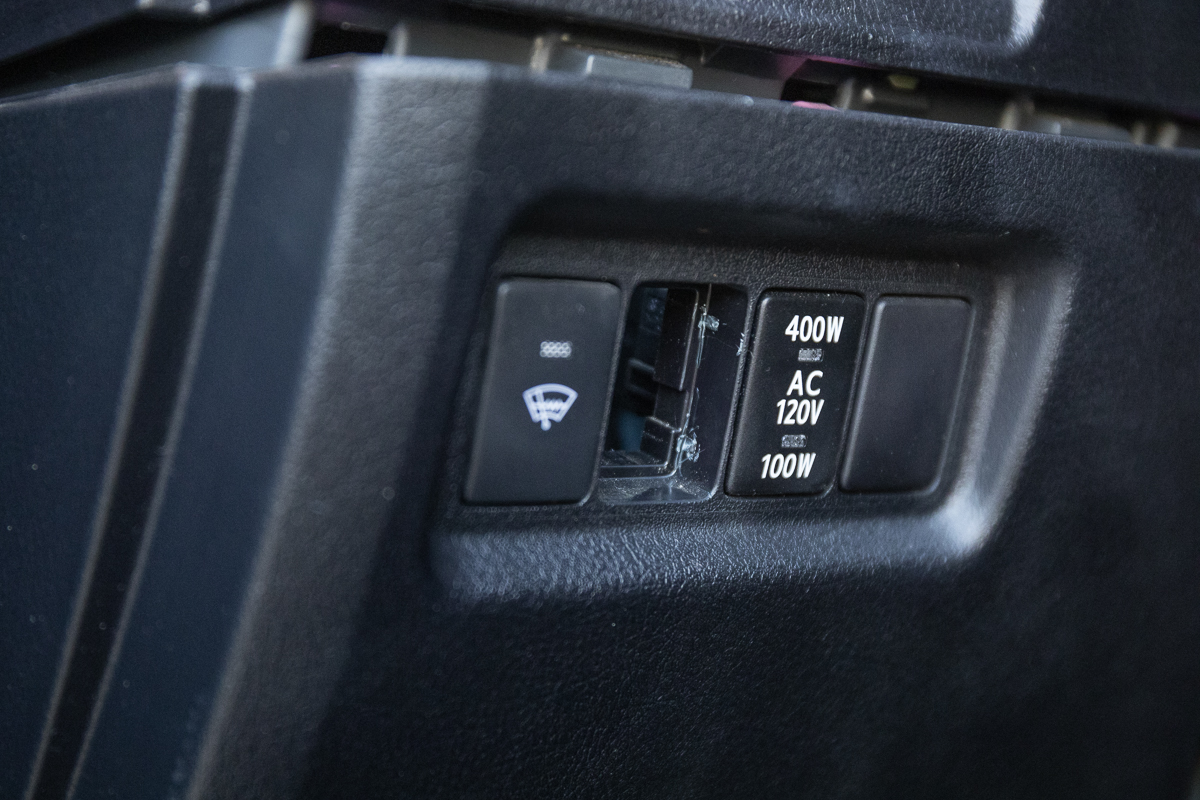 The new manufacturer of the switch button is Air On Board out of Australia and they got the switches to function so well now with no mods at all. You no longer need to cut these small tabs off. 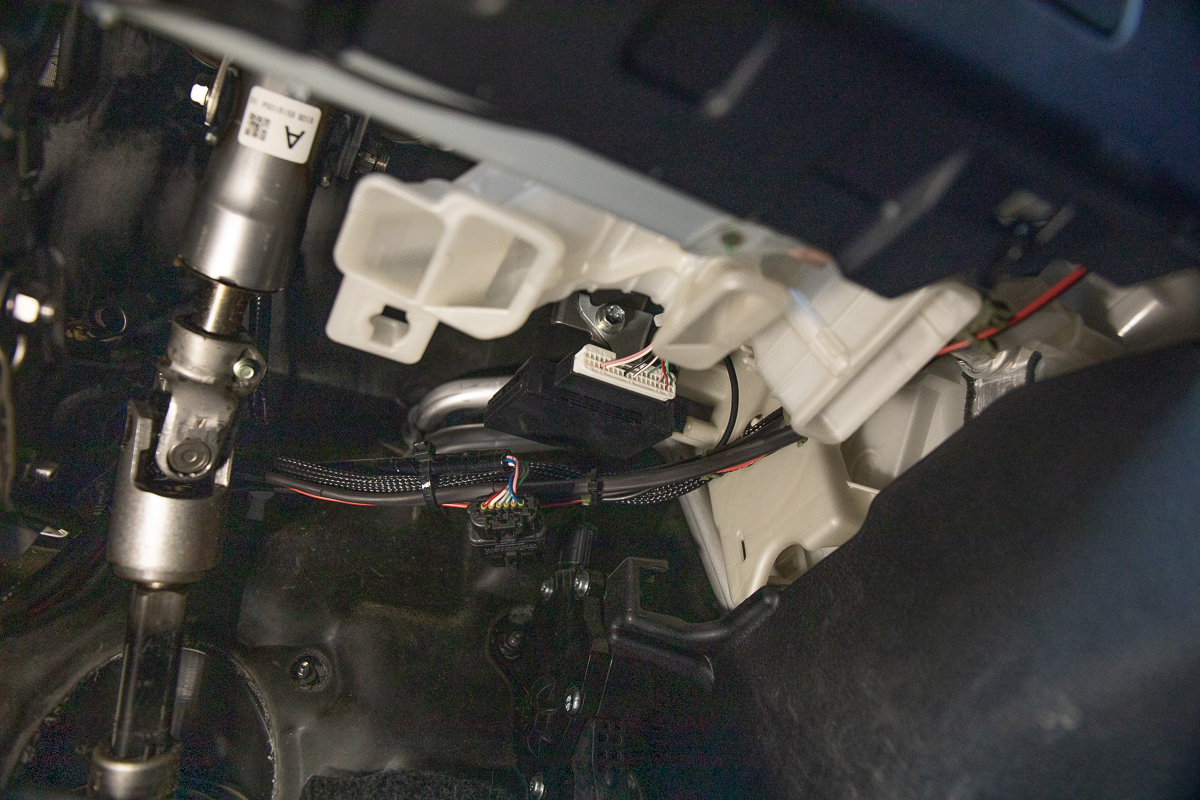 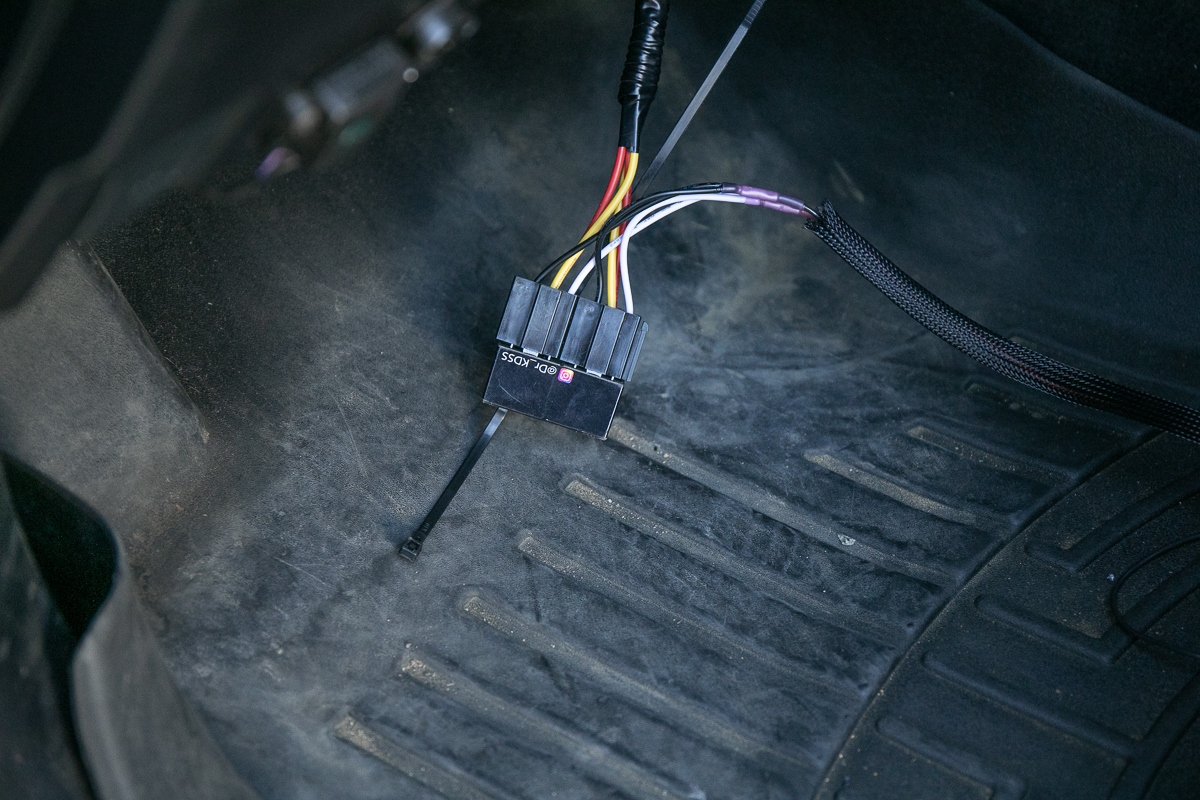 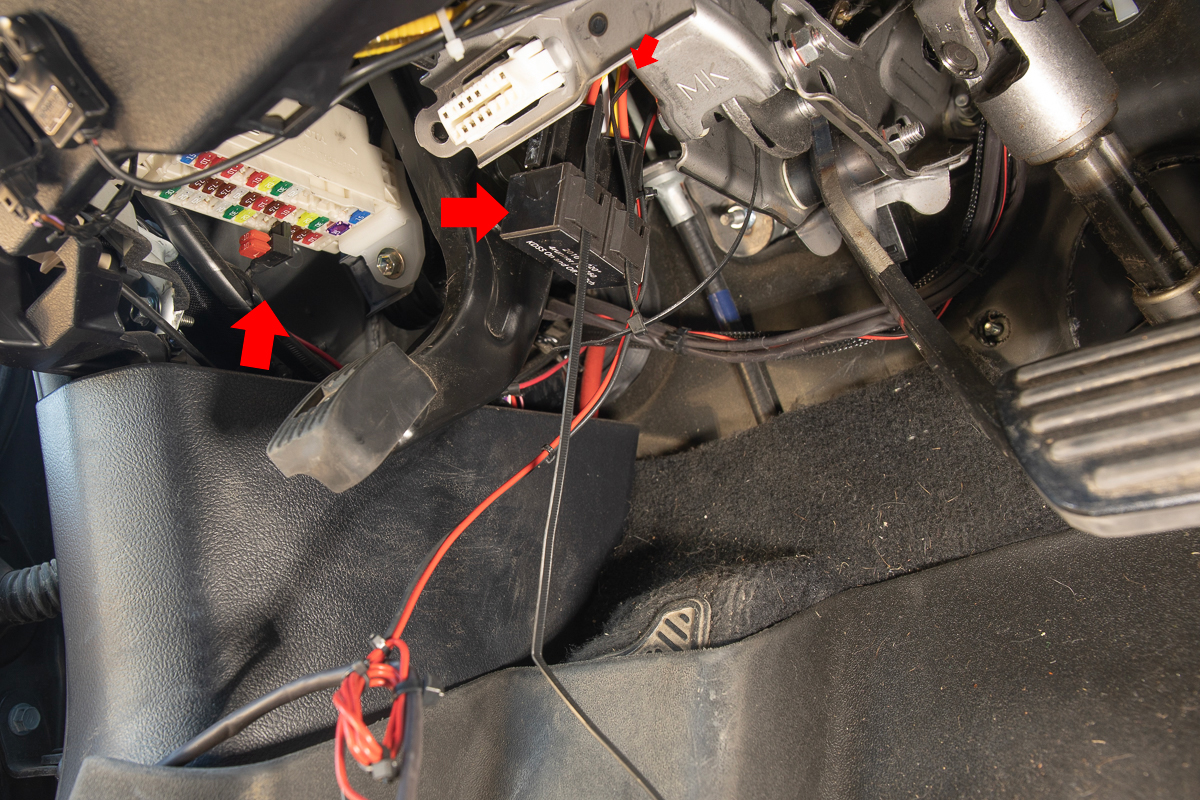 Zip tie the dual relay to the left side of the brake pedal bracket with the wires facing up. 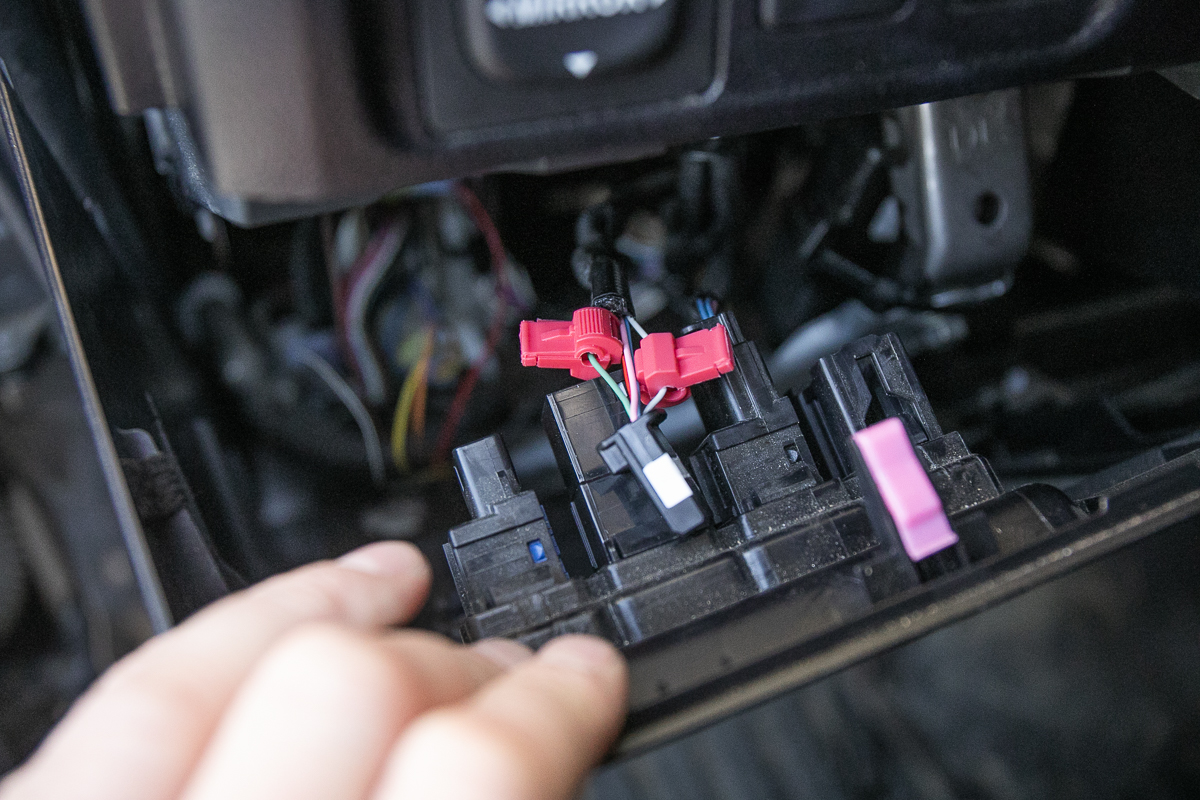 Illumination + and variable ground on the neighboring switch:

If you want your Dr. KDSS to switch to illuminate and have the factory dash cluster dimming sensitivity, you can connect it to the defroster switch wires. Connect your T-Taps on the defroster switch wires to the green wire and the white wire. Make sure your T-Taps are making a good connection on the wires. Sometimes it helps to spin the T-Taps around the wire to fully cut the sheathing on the factory wires in order to make a solid connection. 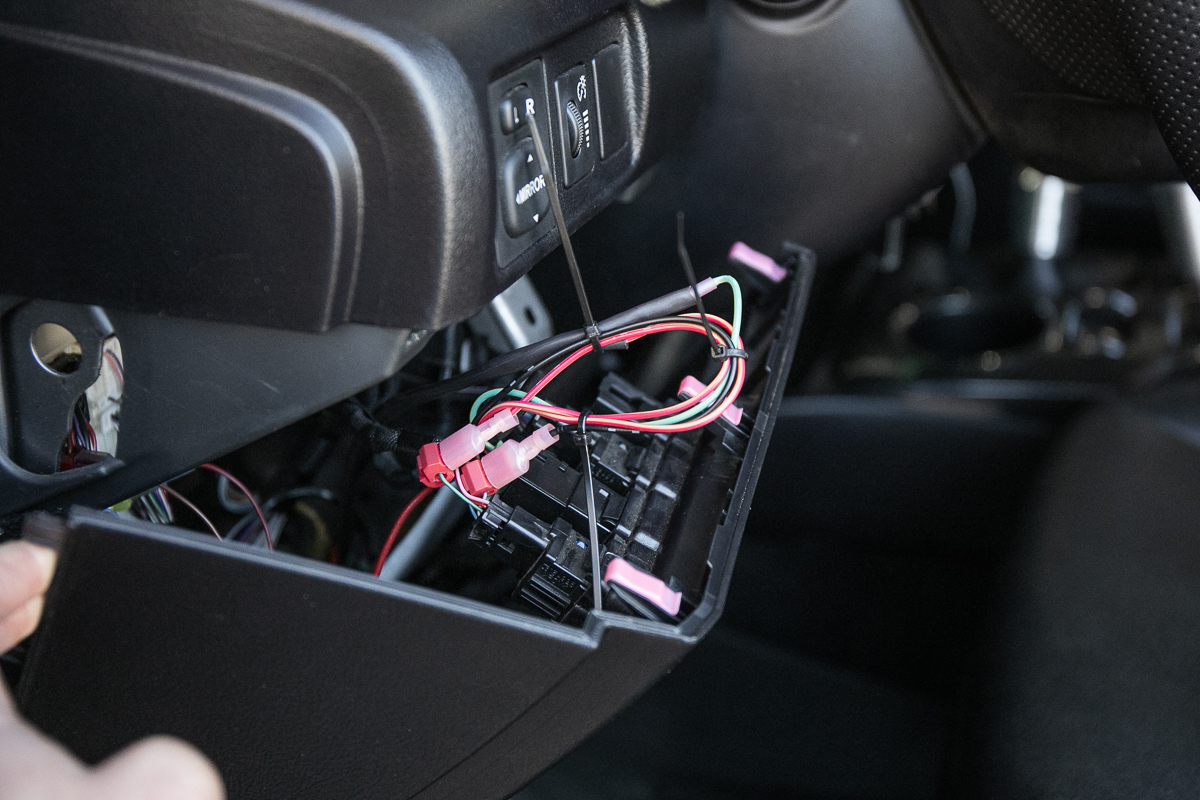 Now zip everything up and put your dash plastics back together. 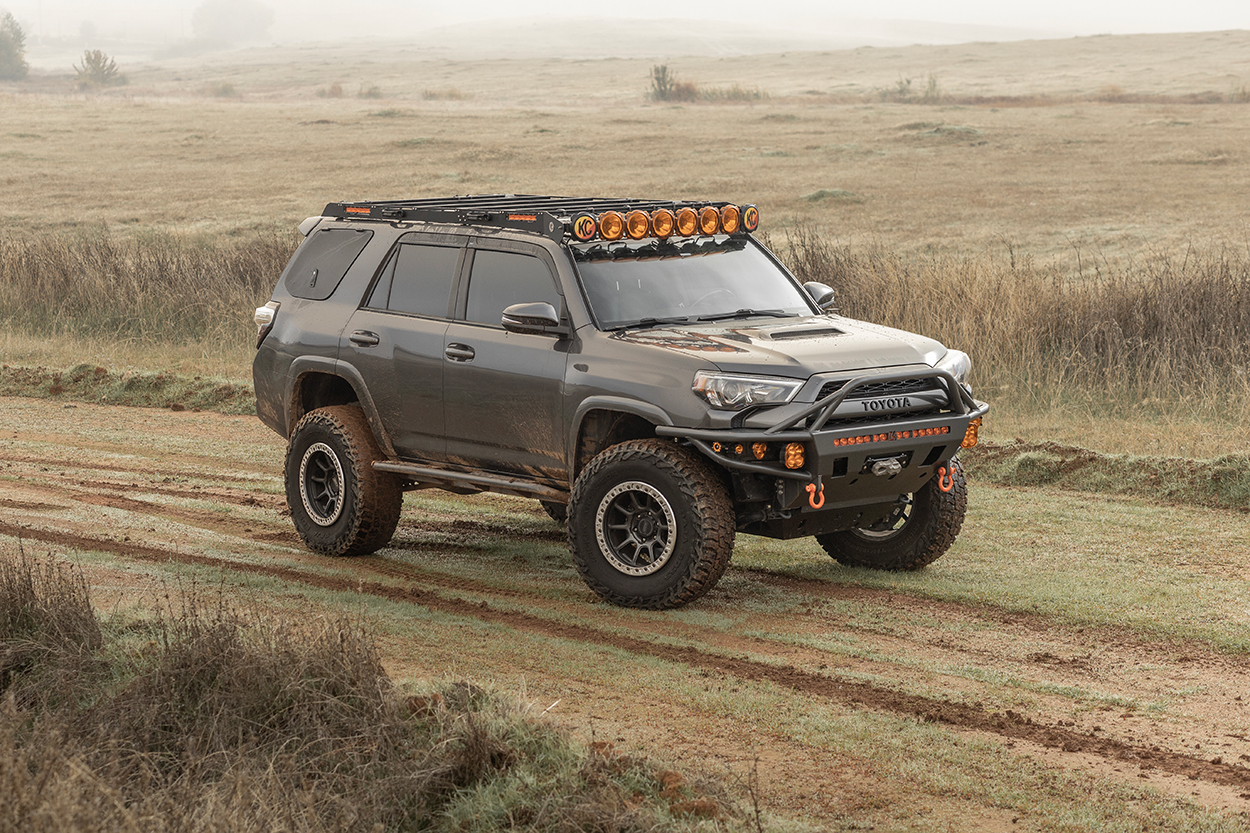 After cruising around with the KDSS valves open over 12mph, it really does make a difference. We pushed the 4Runner pretty hard offroad at around 40mph+ against some jagged rocks in the mud and it works. We were impressed with how the suspension responds to the looser sway bars. The compression is definitely softer and the rebound isn’t so jarring which makes it really easy on driver comfort. With this KDSS switch on, it’s almost like airing down your tires without airing down. Pretty wild.

I dig it. Anyway, let me know if you have any questions.

The button should be labeled “KDSS Off”

I imagine this switch would void the warranty if anything went wrong with the KDSS system. I hope not but I can only imagine the Toyota service department voiding my warranty on anything KDSS related when they see this hooked up to my 4Runner during a routine maintenance service.

Does that make sense?

It’s must have, If you have KDSS system. I already drove 5000+ miles with KDSS off and it really feels different. Also, If you reach out to Dom, he will explain everything one by one and make you understand how KDSS system works. Between, I use this system while I drive to work and daily drive.

I’m not saying your whole article is wrong, I’m just saying you’re calling it on when it’s off and off when it’s on and it’s really confusing. lol

“From the factory your 2010- present 4runner and/or gx460 with kdss above 12mph, the sway bar is active just like any normal sway bar. Under 12mph, the valves in the hydraulics system open up allowing the sway bar to articulate with the suspension.”
From Dr. KDSS

My point is that you’r saying KDSS is on when it’s really off and vice versa. KDSS is on and the KDSS light comes on when the valves are open allowing more articulation, not closed. When the vales are closed the sway bar doesn’t move and acts like any other sway bar, meaning the kinetic dynamic suspension is off. Valves closed and no movement means off. Valves open with swab bar disengaged/free floating = KDSS on allowing fluid to flow and the vehicle to operate like a vehicle with no sway bar. Put it this way…if there was no KDSS then the sway bar would be fixed which is the same as having KDSS off/no KDSS.

Why would you call it “KDSS is on” when it’s not operating aka operating like a vehicle with a normally fixed sway bar aka valves are closed? Valves closed = KDSS off = no KDSS light lit on dash.

how and where can i buy this product?

Not exactly sure where to connect ground wire. If someone can please help me out with a picture. There’s a couple of bolts and don’t know which one would be best to connect to.

Will any small Toyota specific 3amp dash switches do? Looking at Air on Boards switches that don’t require any modification of the dash (removing plastic). I’ve contacted Dr.KDSS, not about this and look forward to adding this to my arsenal of back saving trail remedies!

if you forgot to turn on highway , you are done , Boom shakalaka , not recommended .
its risky , you are basically disconnecting sway bar and its dangerous .

Brenan, I have the KDSS switch installed since last fall and it has worked like a charm, especially up here where I live in Canada where the country roads are pretty rough and also during the winter on the icy roads we get. I would recommend this mod to anyone with a 4runner with a kdss system.

Yeah, compatible for 2010-2022 4Runners although there have been some changes to the switch on the 2019+ models. Reach out to KDSS Dr. if you have any questions on the specifics.

Been eyeing this mod for a while. Glad you like it. My only worry is how the piston and internal KDSS components would hold up with the abuse while ‘loose’ as they would be cycling quite a bit.

I have 35k miles testing thing pretty hard. I have this theory that it will actually prolong the life of the system as it will relieve pressure from the system , in turn it wont find the weak seals.

This seems like a must have for people that drive forest roads at speeds greater than 12 MPH.

Hey Brenan, Great Article and I am very interested.