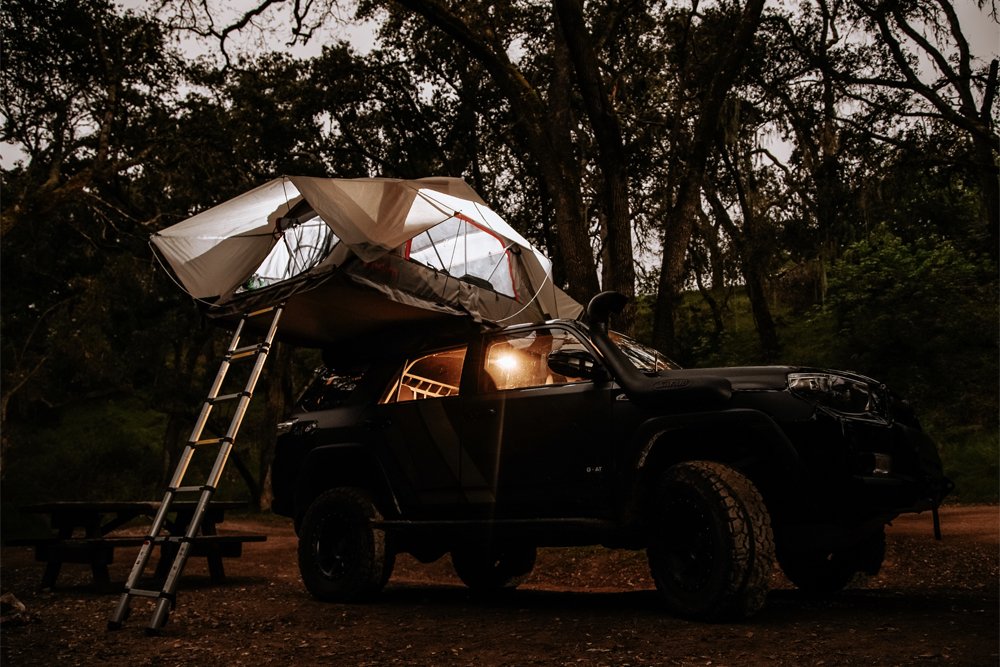 Back in March, we reported on a new Yakima roof rack that launched last year at SEMA. In that article, we discussed how Yakima has been offering universal gear and accessories for many years.

In 2016, Toyota and Yakima engaged in a national partnership which included some Toyota models having Yakima racks and mounting gear, collaborative marketing campaigns, and various sponsorships. That was just the beginning.

Debuting The SkyRise Tent Through REI 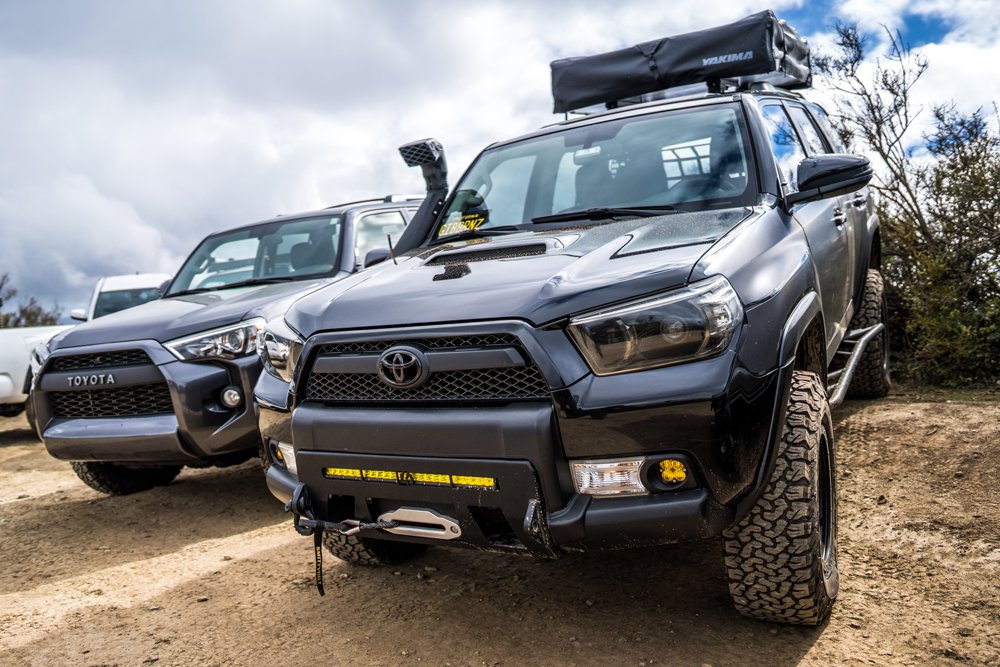 Just a few years ago, Yakima entered the rooftop tent market debuting their SkyRise tent exclusively through REI. This was a new space for the company as they traditionally focused on universal rack systems for bicycles, skis, snowboards, etc.

While this review is specific to their latest version of the tent, the HD (heavy-duty 4-season), we were fortunate enough to have that first iteration and used it quite often. As you read further, we’ll weave in and out the differences between the two and why we’re fans of their latest version. 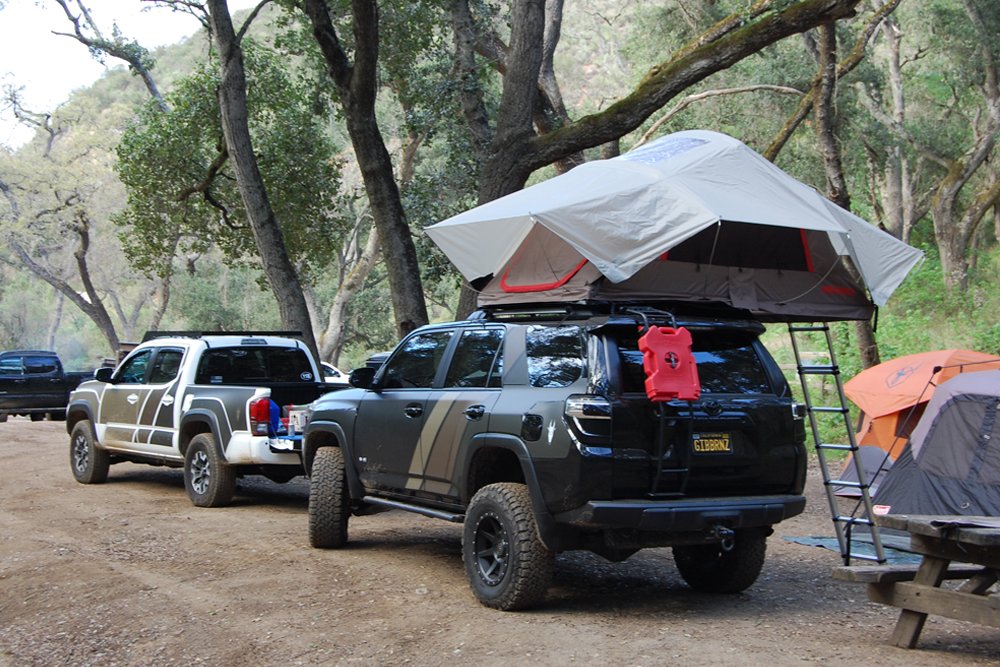 If you’re in the market for a rooftop tent, you’ll see that there are quite a few to choose from.

What you should take into consideration is how often you’ll use the tent, weight, static weight limit, sleep capacity, aerodynamics, style, what seasons you plan on using it, and of course, the price. 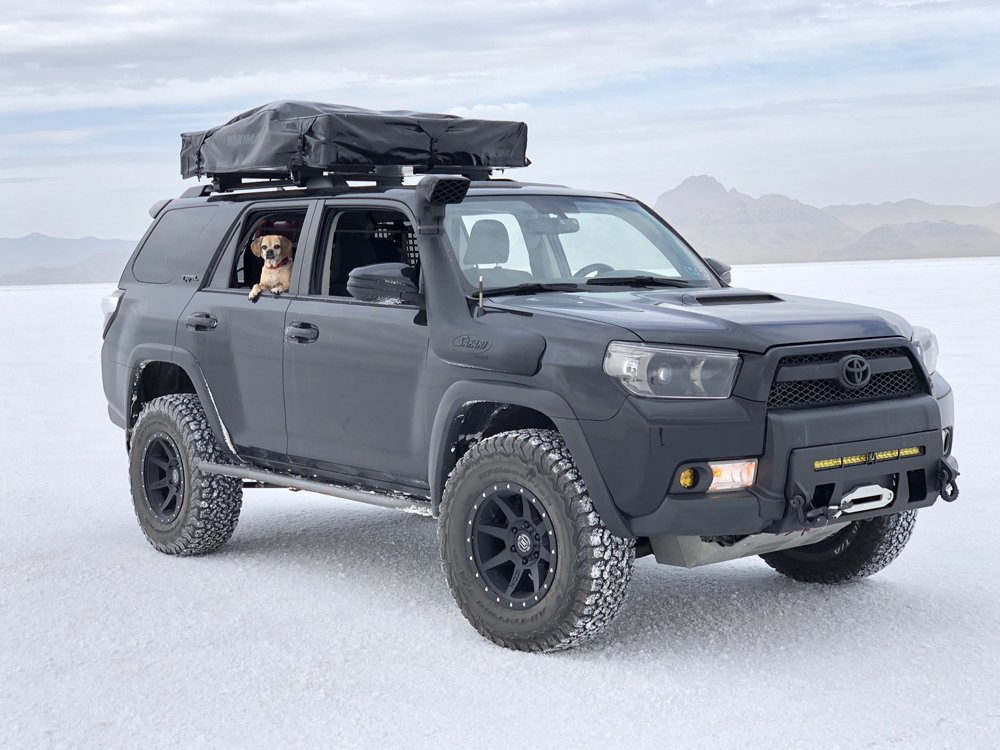 Yakima sells a few different versions of their SkyRise tent.

So, if you’re set on Yakima, figure out which one makes sense to you. We started off with the SkyRise Medium tent and then recently, upgraded to the SkyRise HD Medium to take advantage of camping throughout the winter months.

Regardless, if you’re outside camping in the snow, you still might want to grab a heater! 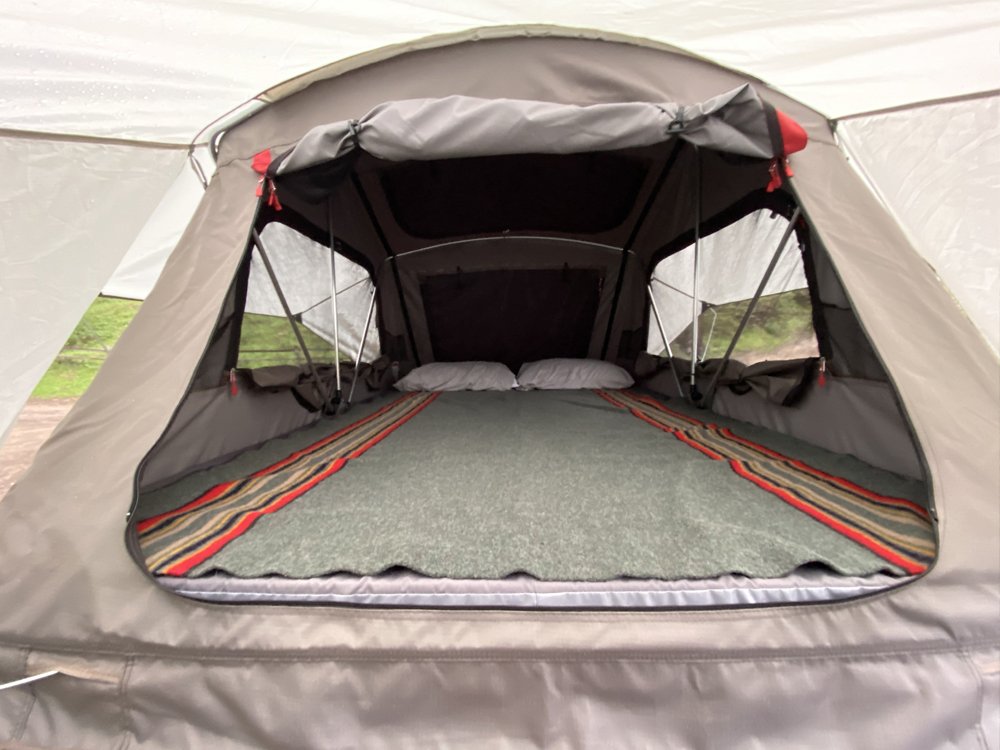 All of the different tent models include a ladder, access doors, SKS mounting point security locks, a sleeping pad, and a protective cover. On the 5th Gen 4Runner, the tent can be mounted to the crossbars but for a more secure mount, you may want to flip the tent mounts to the side rails.

We’ve used the tent mounted both ways and have had no issues to date… besides a run-in with a low branch that broke one of our crossbars… not the tent’s fault!

Yakima has started to offer a few different accessories that can be used with and of their SkyRise tents.

Some accessory options include:

As we had mentioned previously, there are lots of tents on the market and you need to choose the one that makes the most sense for you. Since we are now on our second SkyRise tent, we’ll provide a non-biased pros and cons list: 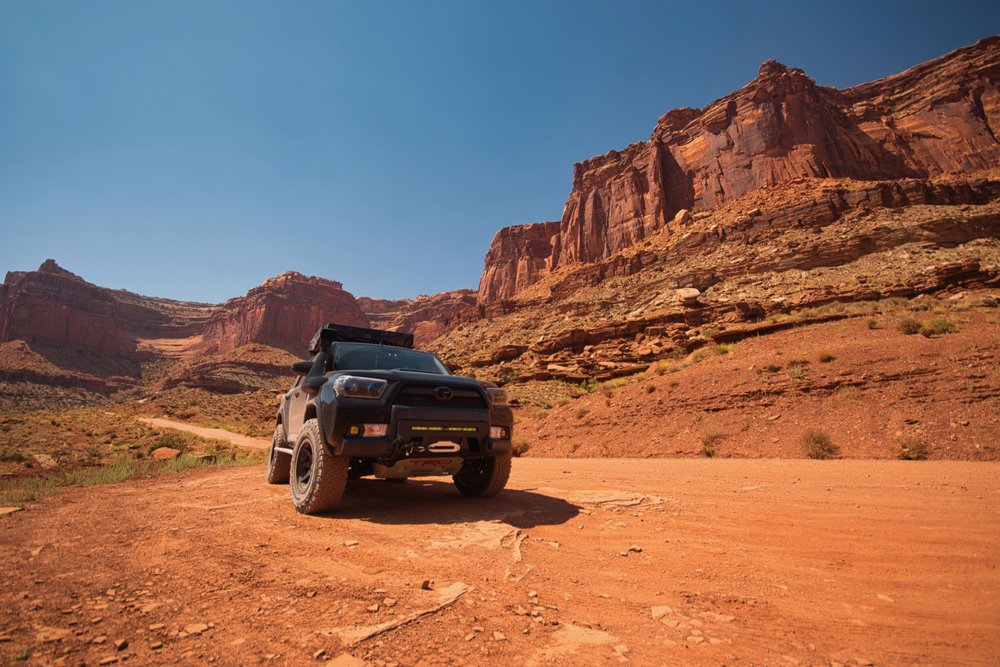 All-in-all, we love our SkyRise tent, which is why we’re on our second one.

The price is reasonable compared to other tents on the market, it’s well-made, and we’ve used and plan to continue to use the hell out of it. If you’re an REI member and haven’t used your 20% off coupon yet, consider holding onto it for a SkyRise rooftop tent!

Good article. Thanks for writing it. Not enough reviews have been made on this tent.

I have this tent on top of a snugtop hi rise camper shell with outdoorsman package ie 1″ thick fiberglass and 500 static weight on yakima track system. I recently confirmed via test fiting that the Tepui (Thule) insulator package for their 3 person tents fits this tent perfectly. Due to the lighter weight of the Yakima package which is why I bought it to fit on top of my camper, I believe that this tent with the insulator will perform superior to the Thule model in cold inclement weather due to it all poly construction and heavier fabric 600 denier vs 280 for tepui and similar brands. The reason is that if you leave the top windows open like you would on a double wall tent and the rainfly on you leave a space for condensation to escape through the insulator which is air permeable but with the insulator you don’t let all of the heat escape. This solves the biggest problem with this tent which is that if you have it all closed in cold weather it will condensate like any single wall tent or you let the heat escape and suffer freeze out especially in windy conditions. I know this because I watched the water vapor in my breath condensate on the roof last December in a 28F windy night. When I opened the roof vent above my head it exited through there. This is why most roof top tents are made of poly cotton, its breathable. The problem with them is in prolonged rain and snow they will eventually wet out. That is why Tepui made the waterproof weather hood. The only problem with it is that you have just converted your breathable tent to a single wall sil nylon or polyester which is not breathable. Tepui could mitigate this by adding better venting to the weather hood like good 4 season mountaineering tents do.

I think the products in this area are still relatively new and evolving in concepts and functionality. We will probably eventually see insulators for the annex’s as well and possibly better insulation in the floor of the tent.

YAKIMA SHOULD ADD AND INSULATOR PACKAGE CUSTOM FIT TO THIS MODEL SO WE DON’T HAVE TO BUY THEIR MAIN COMPETITORS. THEY ALSO NEED TO BEEF UP THE FLOOR INSULATION FOR TRUE 4 SEASON USE.

HOWEVER FOR USE ON TOP OF A CAMPER SHELL WITH THE INSULATOR PACKAGE I BELIEVE, THIS IS THE BEST ROOF TOP TENT OUT THEIR RIGHT NOW DUE TO LIGHTER WEIGHT AND WEATHER RESISTANCE. .

Any thoughts on removing all the mounting hardware and the aluminum bars on the bottom of the tent and bolting it directly to the 80×20 bars on an aftermarket rack such as a prinsu?

To be honest, that’s not a bad idea at all and I’m considering doing that very same thing once I get a Prinsu. All RTT’s are heavy, so putting that as a “con” kind of carries little weight. It truly is a great tent and we just used it on a cross-country trip. Couldn’t be happier with it. But if I could “lower” it somehow, what you proposed is a very doable option. I’m guessing the Prinsu uses those T-bolt/T-slots, so in theory, your bolts would go through the bottom of the tent. The padding is thick, but if I were to do what you proposed, I’d use a nylon nut and cut off any excess. I doubt you’d ever feel it laying in the tent, but you just wouldn’t want a 3am bolt poke in the hip! 🙂